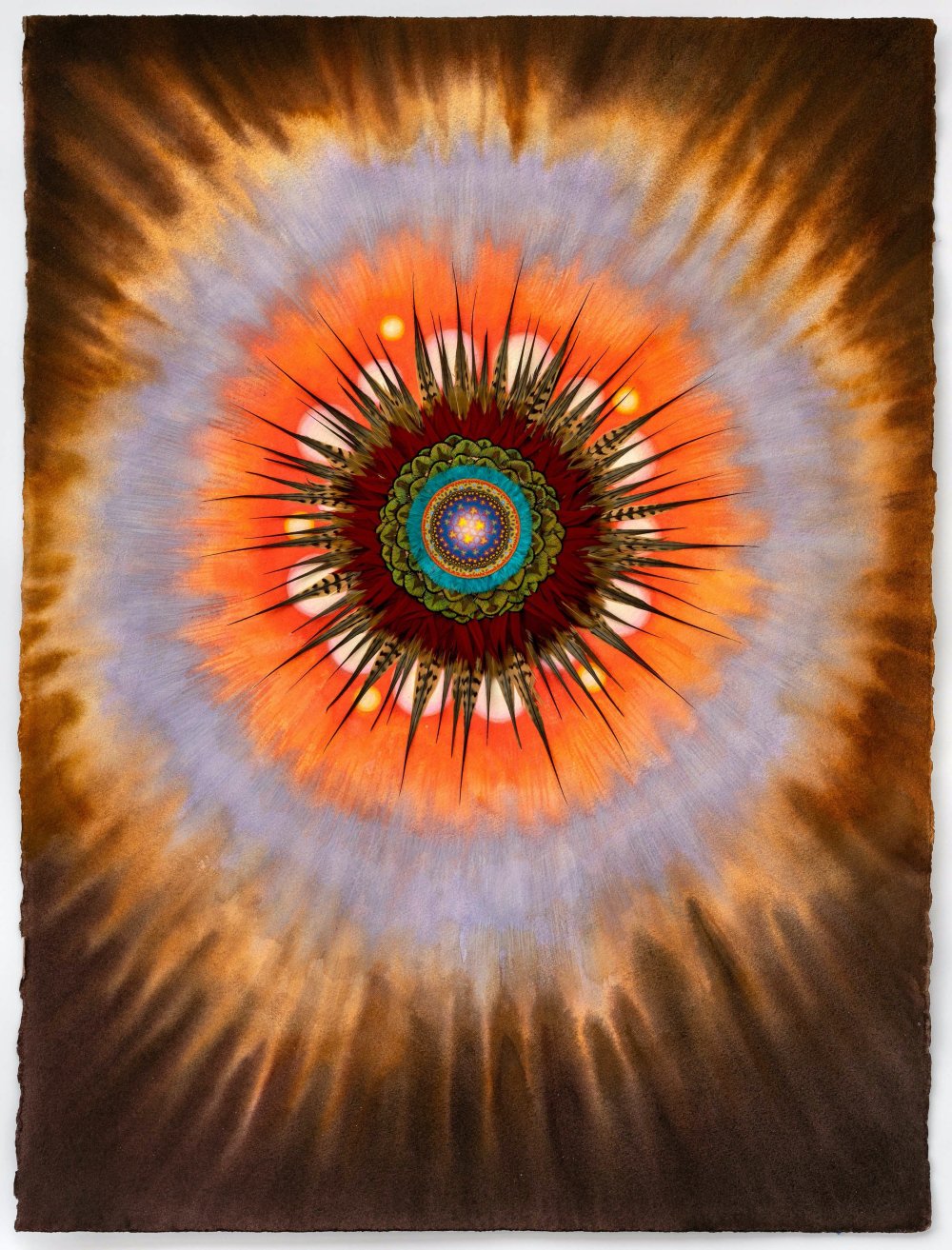 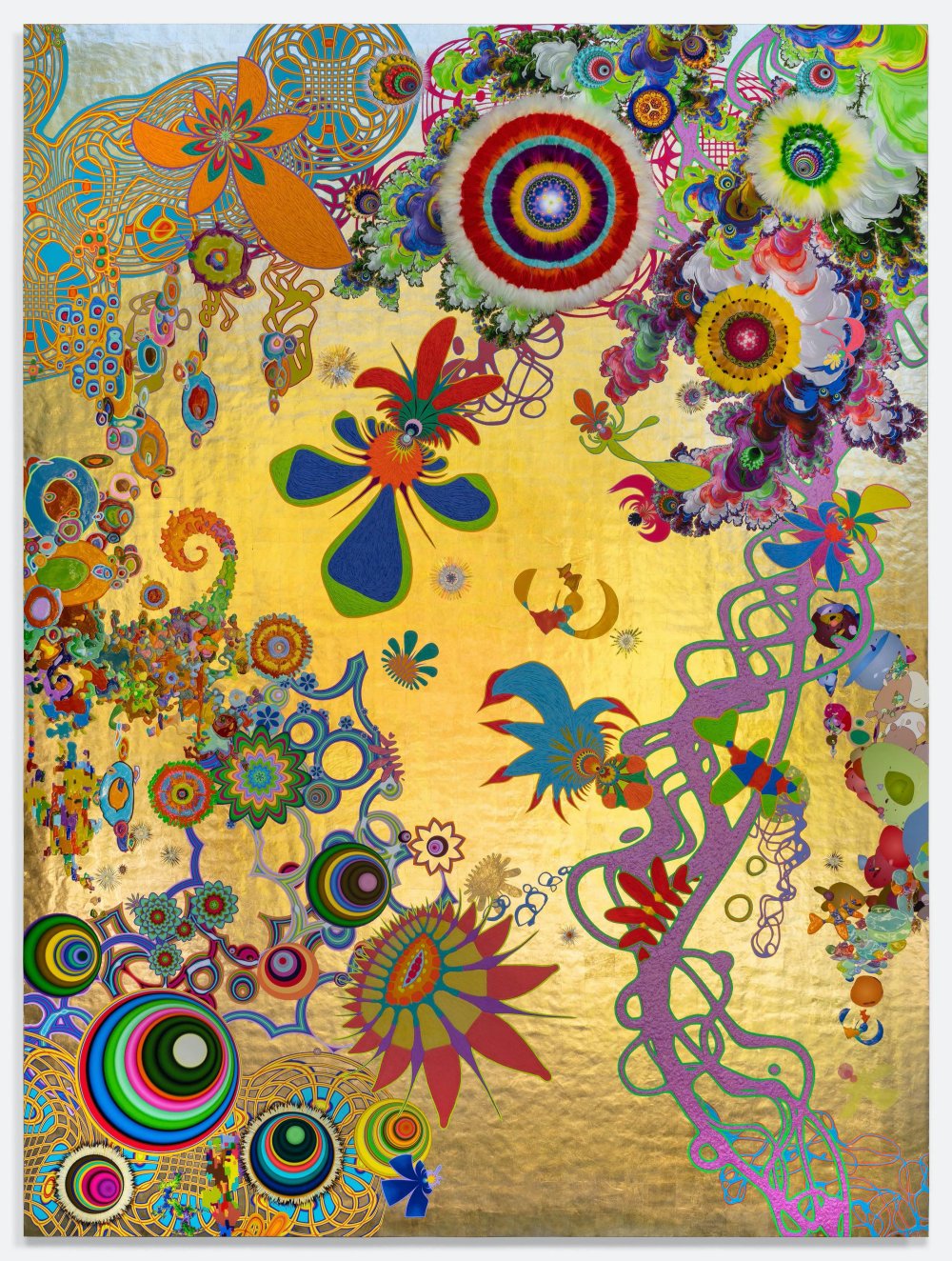 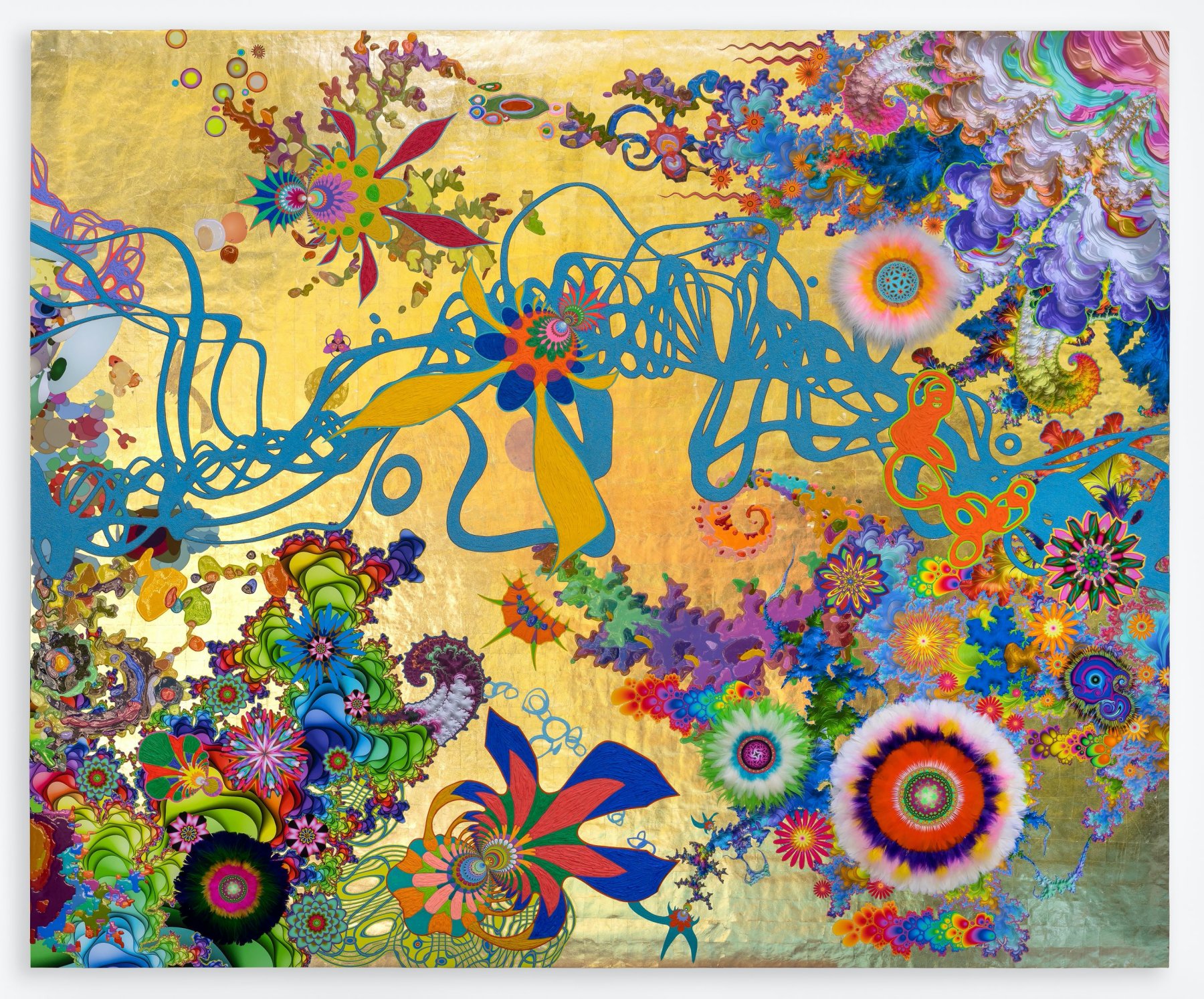 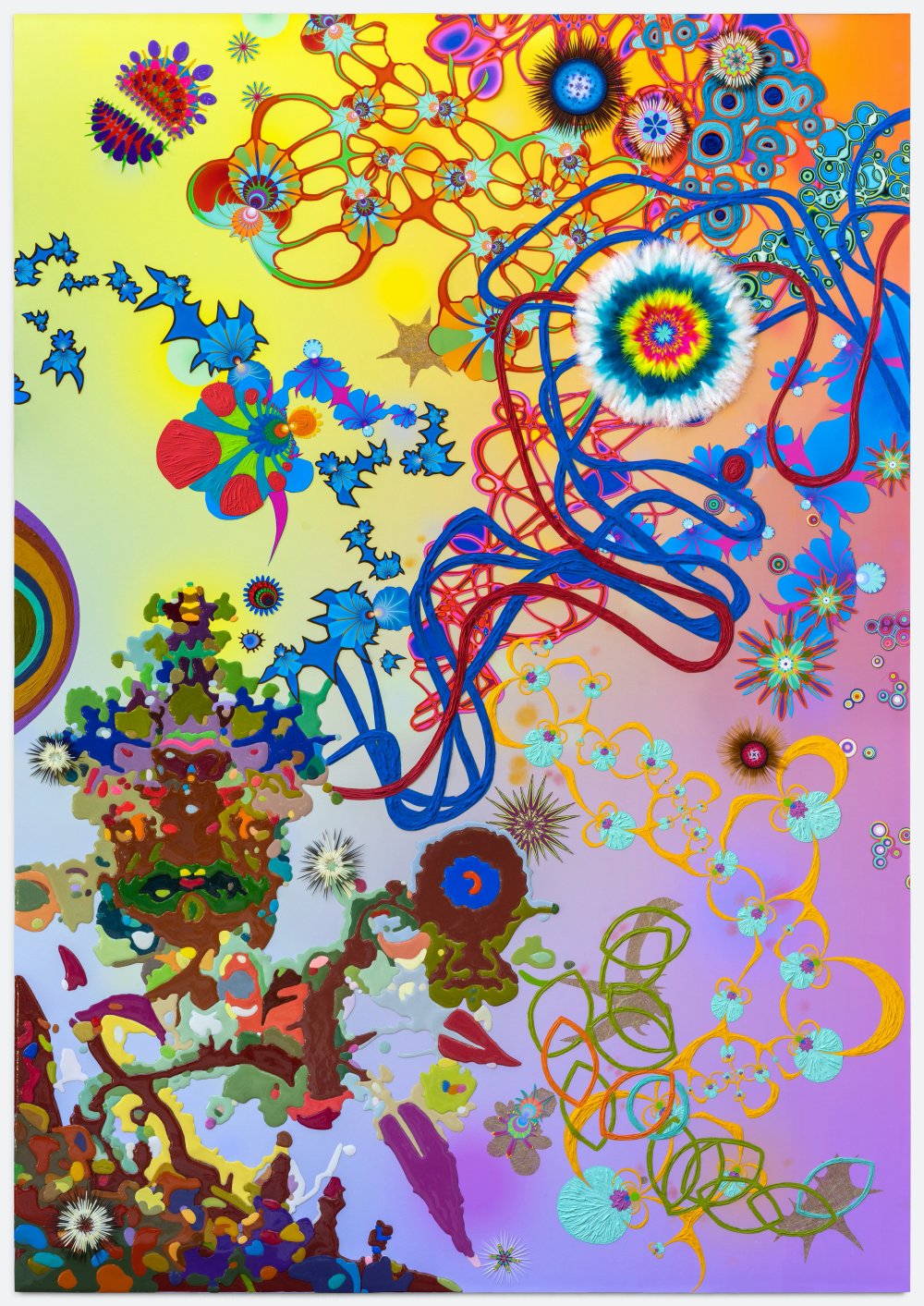 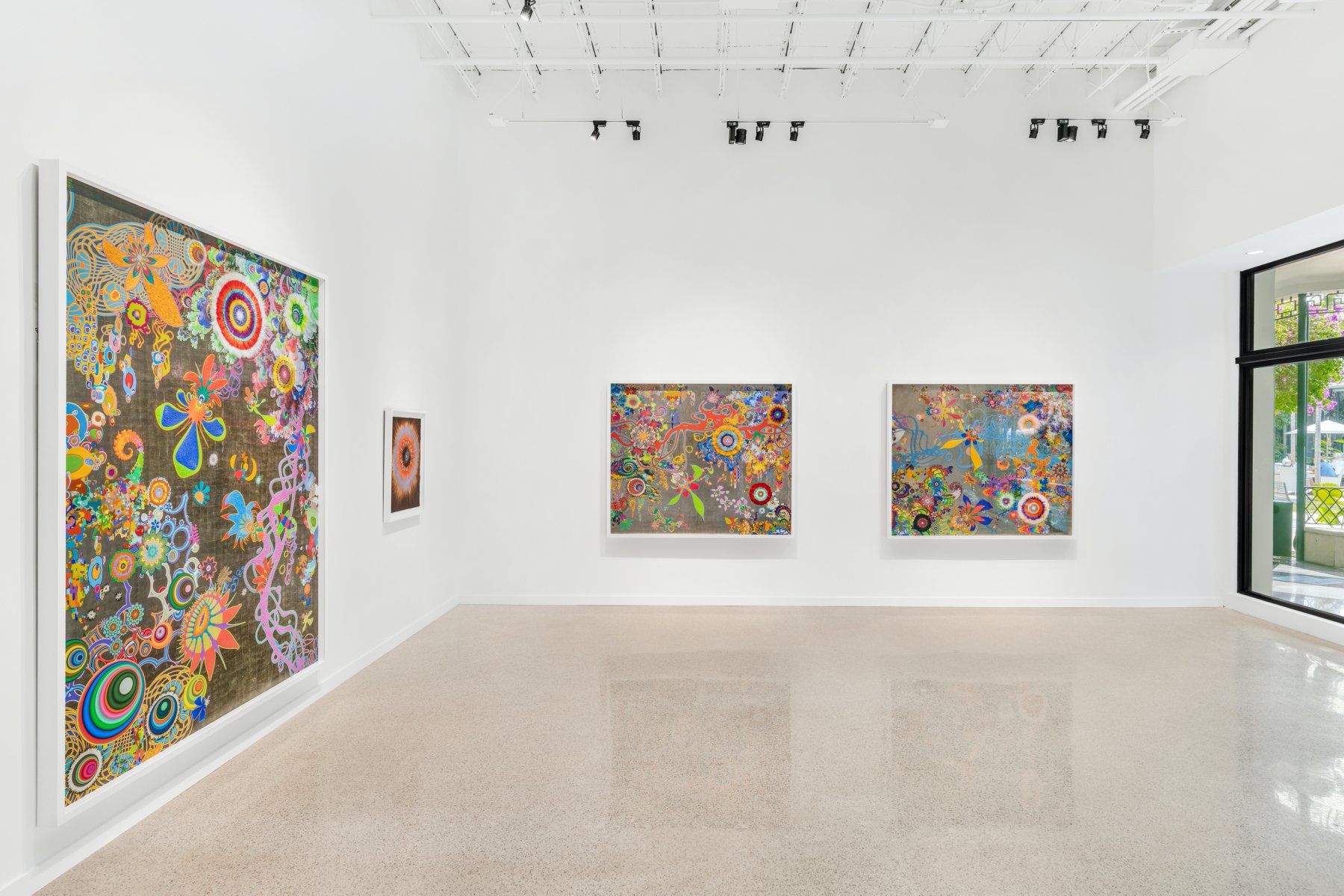 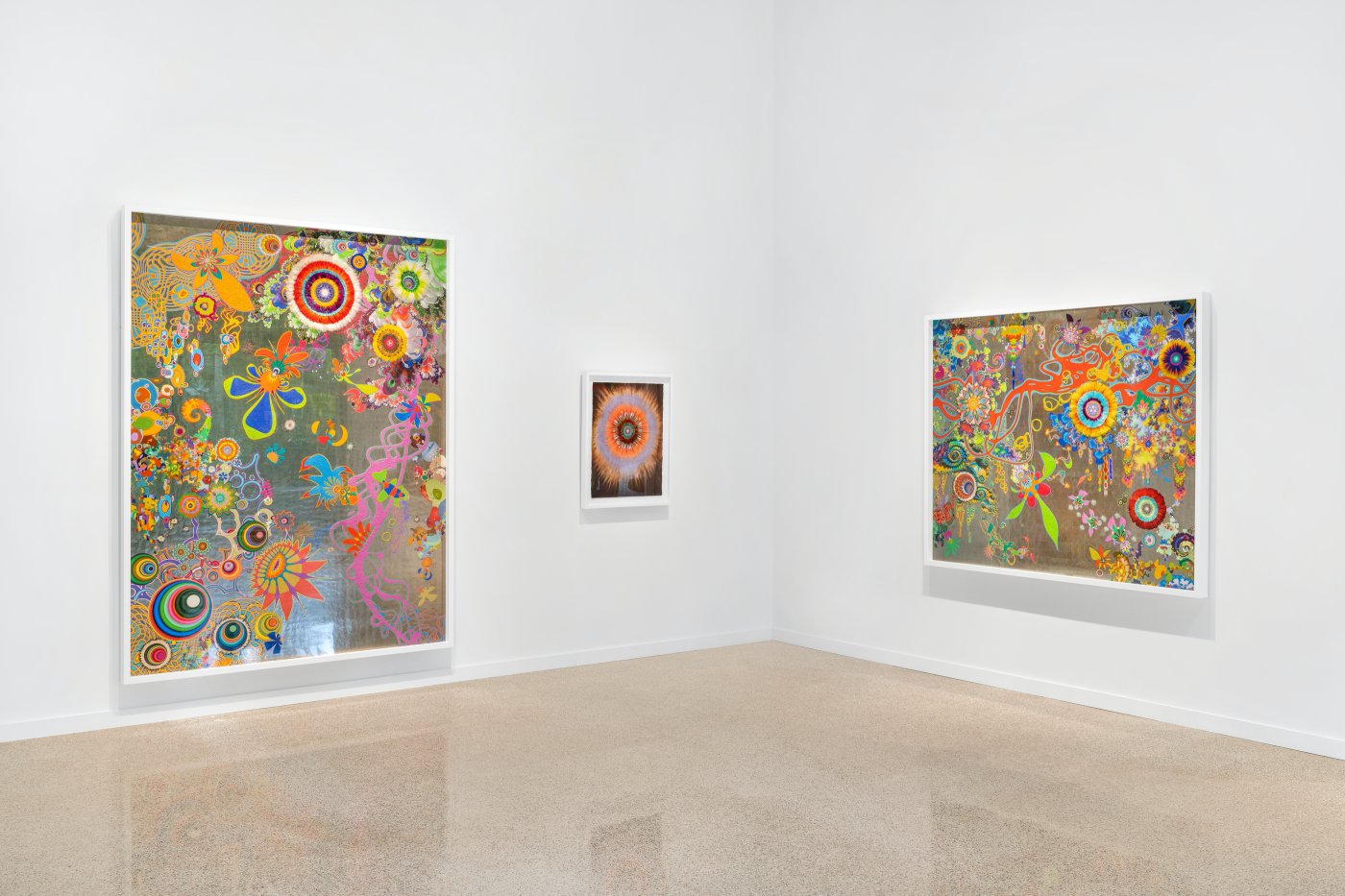 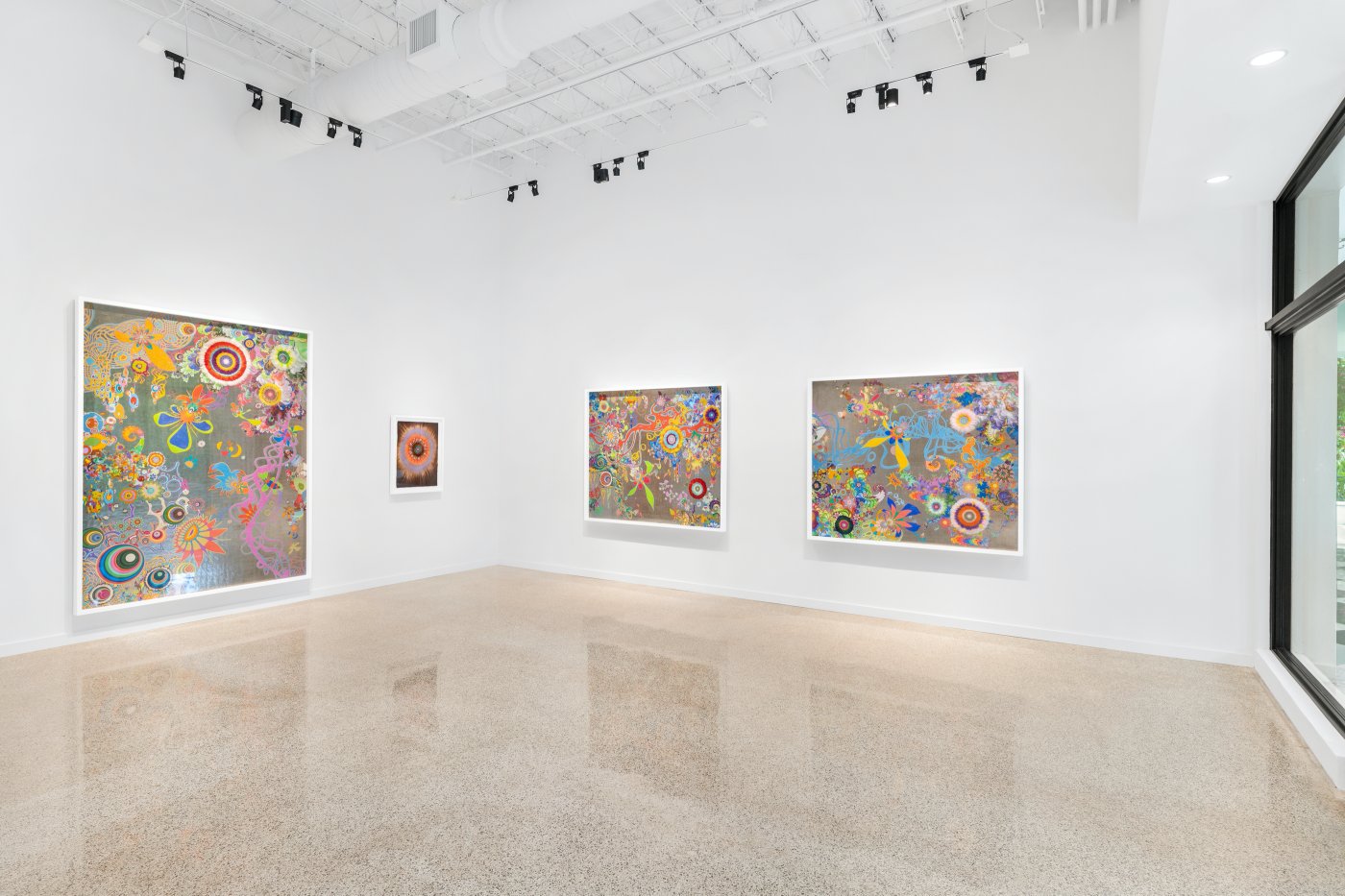 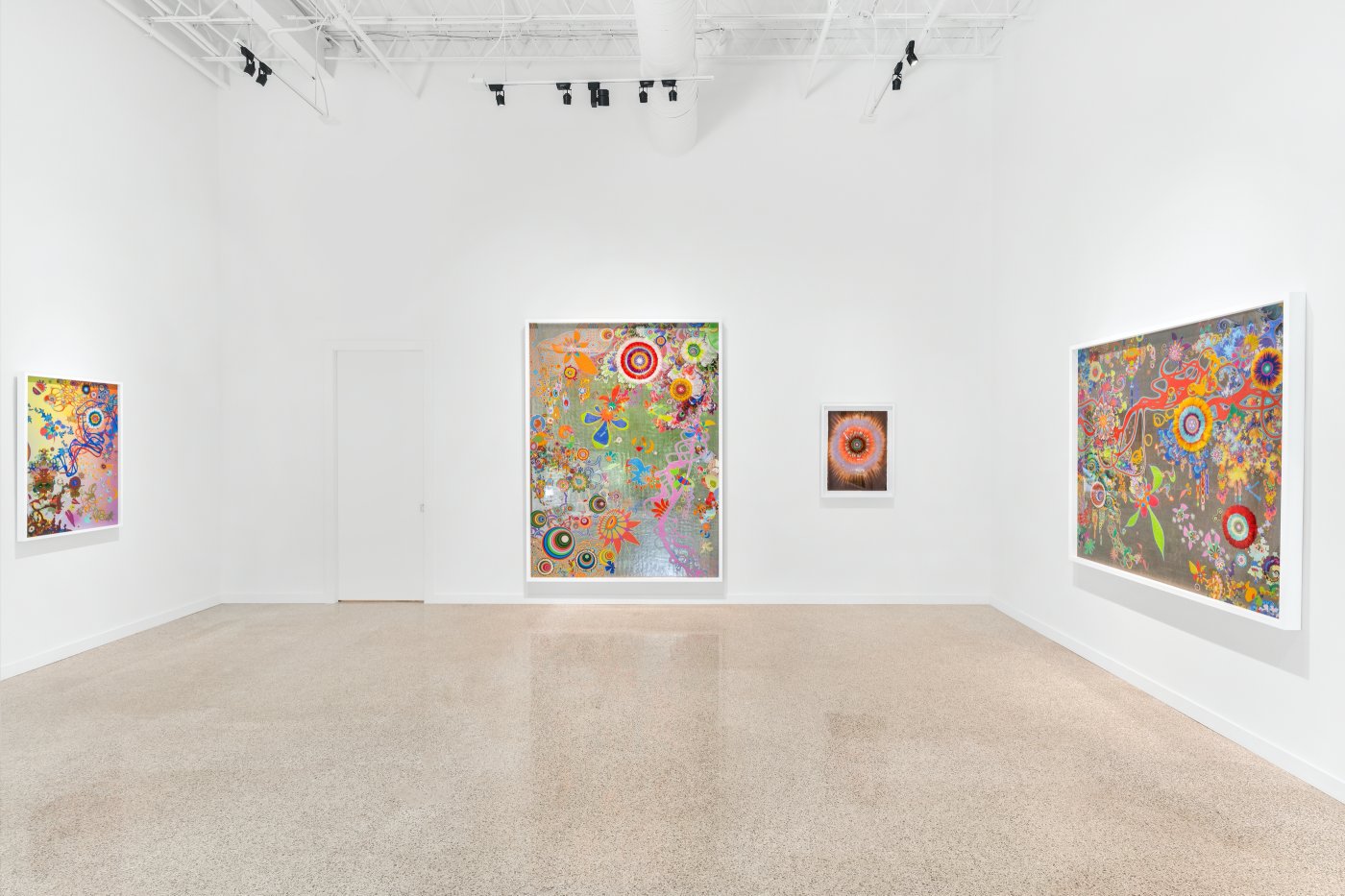 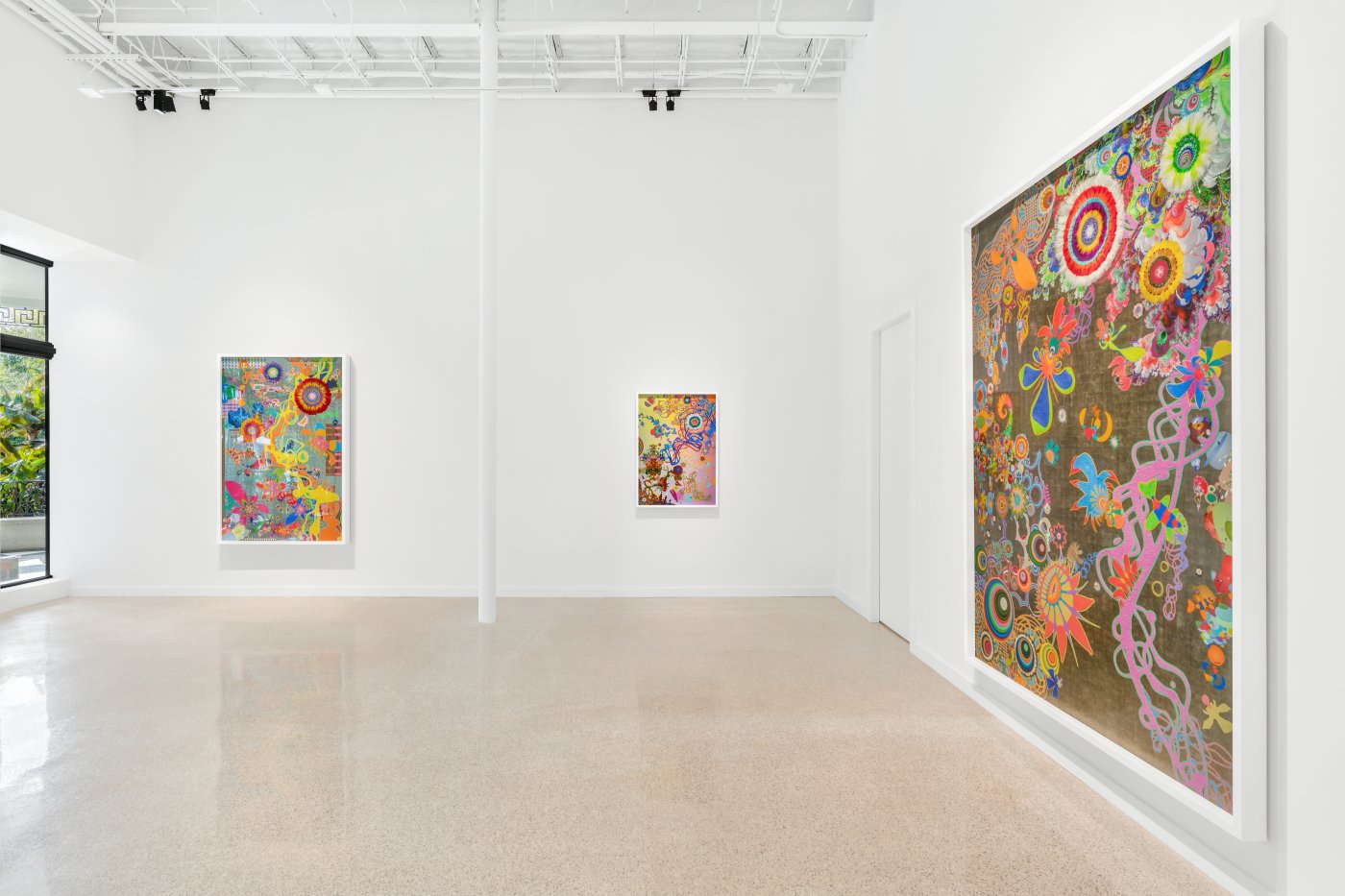 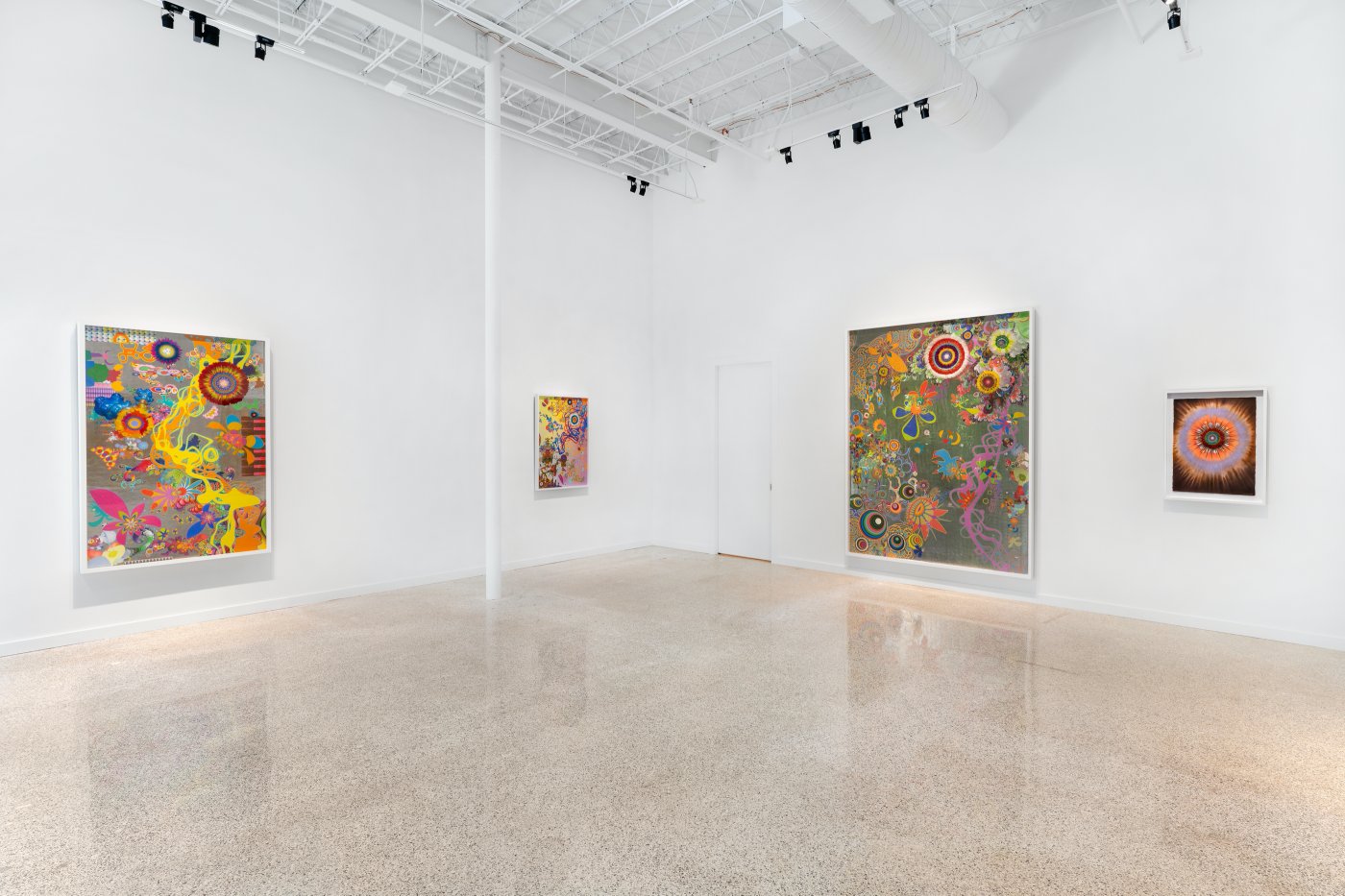 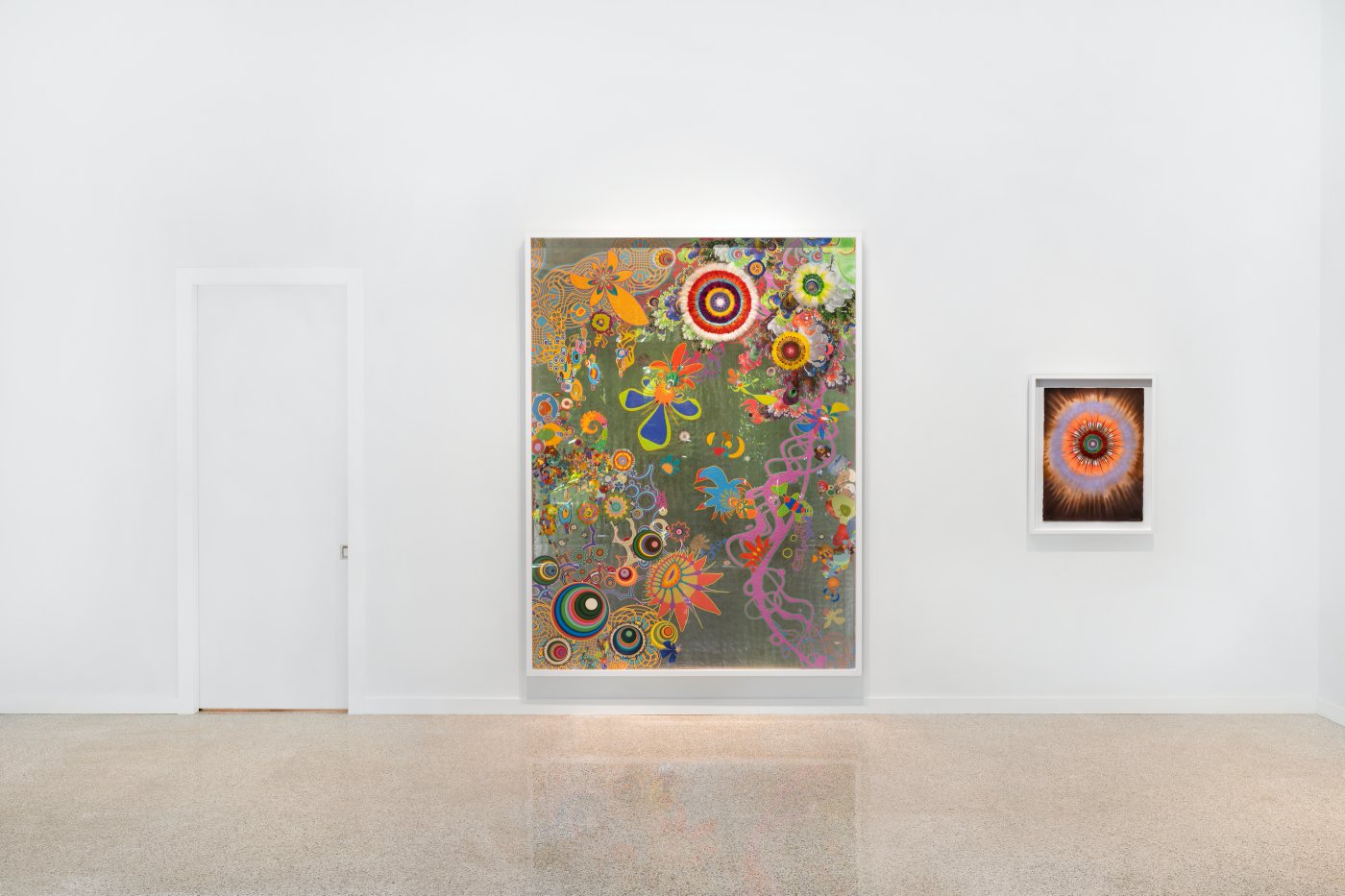 Over the course of the past two decades, Alvarez has developed a lexicon of forms that he employs to create visually and conceptually complex works that mine his own interior landscape in an effort to connect to the basic human experience. This new body of work explores the transcendence born from grieving the recent loss of Alvarez’s partner, internationally renowned magician and skeptic, James Randi (“The Amazing Randi”). Alvarez envisions this new series as an experiential moment, assisting in his own passage through grief and towards a rebirth into a greater, expansive and cosmic understanding of life and death.

Alvarez saturates his works with organic, found materials like porcupine quills, feathers, crystals and minerals. The sensory plane becomes activated through this Maximalist approach, melding haptics with rich, chimeric dreamscapes to expose new modes of consciousness. His use of these materials originally derives from his dedicated study of the contemporary writings of Carlos Castaneda when he was a very young man and pre-modern and mythic shamanism from pre-Columbian Mesoamerica.

Alvarez’s artistic career began with an elaborate performance in which he toured Australia with James Randi, pretending to channel Carlos, a 2,000 year- old spirit. Posing as a seer, Alvarez sought to explore the notion of both inhabiting and espousing belief by publicly debunking the notions of soothsayers and charlatans. This early work from Alvarez was dually inspired by his own artistic muses and his partner Randi’s lifelong project to expose paranormal chicanery of all forms.

Jose Alvarez D.O.P.A.: A Wondrous North Star operates as a cartography of what occurs following loss, what the artist describes as “charting a psychological, spiritual, intellectual and emotional journey.” Work titles such as “I Wish You Were Here” (2020) complicate traditional ideas of presence and absence, imbuing the organic materials Alvarez uses in his paintings with a ceaseless energy force.

ABOUT JOSE ALVAREZ (D.O.P.A.)
Jose Alvarez (D.O.P.A.) (b. 1961) creates mixed-media works on paper, videos, installations, and performances, through which he breaks down belief systems into intersecting components of science, spirituality, and mysticism. His works burst with psychedelic patterns, colors, lush floral imagery and traditional shamanic materials such as crystals and porcupine quills. They appear as hallucinatory portals into other realms, or send-ups of them—depending on the viewer’s perspective. He began his career through charismatic performances where he “channeled” the 2,000-year-old spirit of a shaman named Carlos. In front of live audiences around the world, Carlos’ performances and media broadcasts have been viewed by millions of people in the United States, China, Australia, Europe, and South America.

Alvarez (D.O.P.A.) has performed and exhibited at the Whitney Museum of American Art, The Kitchen in New York, NASA Johnson Space Flight Center, Parkes Radio Telescope in Australia, Gavlak Gallery in Los Angeles and Palm Beach, Marlborough Gallery in New York, The Moore Space in Miami, Ratio 3 in San Francisco, Jeffrey Deitch in New York, the Yerba Buena Center for The Art in San Francisco, The Norton Museum of Art in West Palm Beach, Taubman Museum of Art in Roanoke, Beth Rudin DeWoody’s The Bunker Artspace in West Palm Beach, The Kemper Art Museum in Kansas City, and the San Antonio Museum of Art in San Antonio, Texas, among others. In 2020, he was included in A Very Anxious Feeling: Voices of Unrest in the American Experience at the Taubman Museum of Art, he created for the Sarasota Art Museum, an impressive 10 1⁄2 X 78 ft vinyl mural, his largest vinyl mural to date, he was included in a group presentation by GAVLAK at The Armory Show as well as creating his largest painting to date “ The Life Within You” a 9’ L X 24 ‘ W tour de force for The Core Club in NYC.

Courtesy of the artist and GAVLAK Los Angeles / Palm Beach