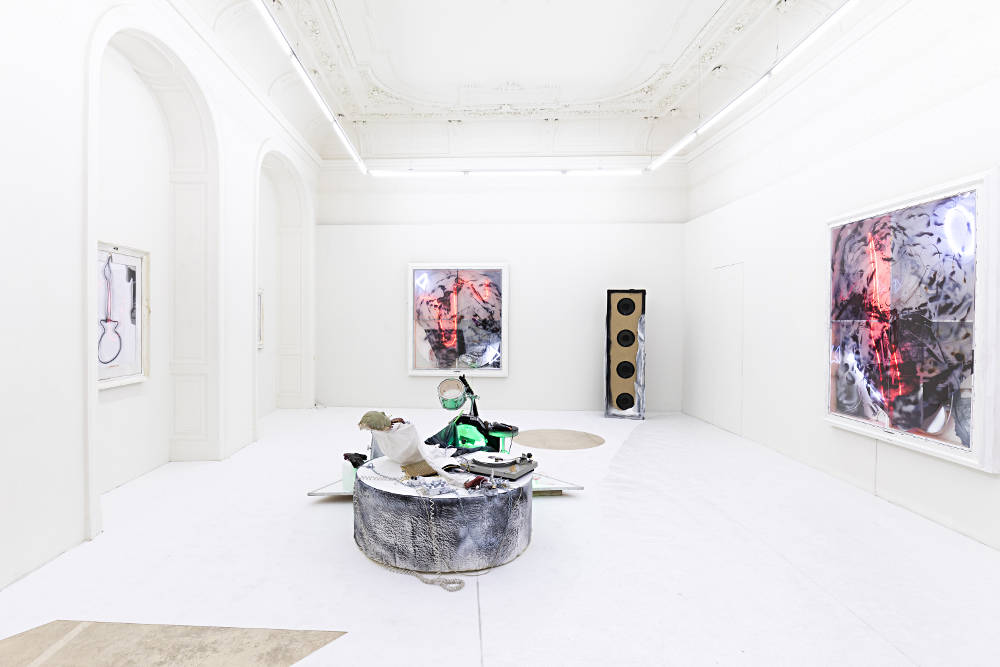 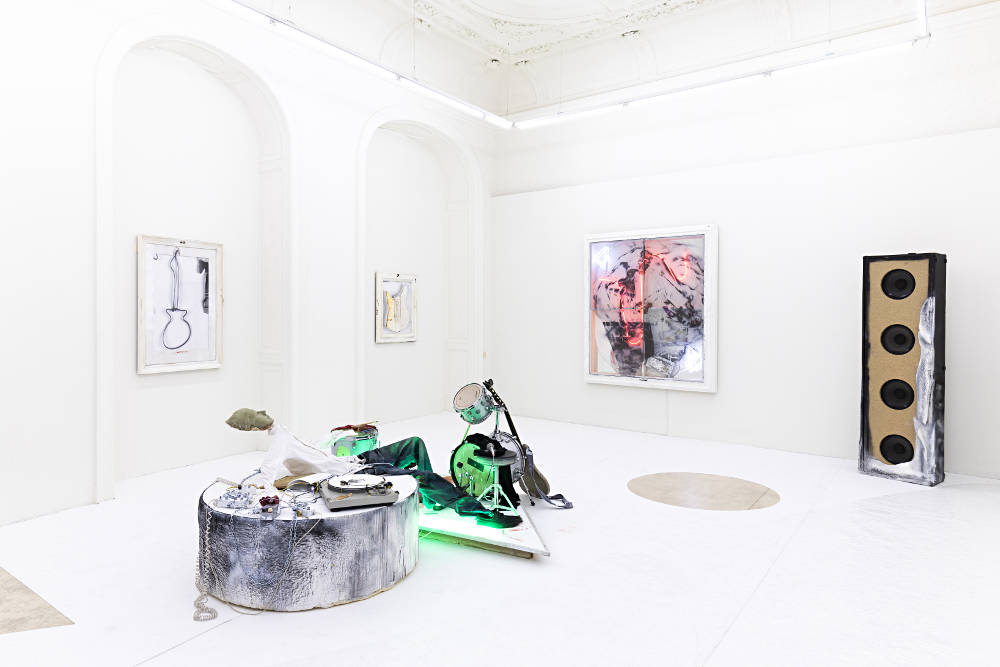 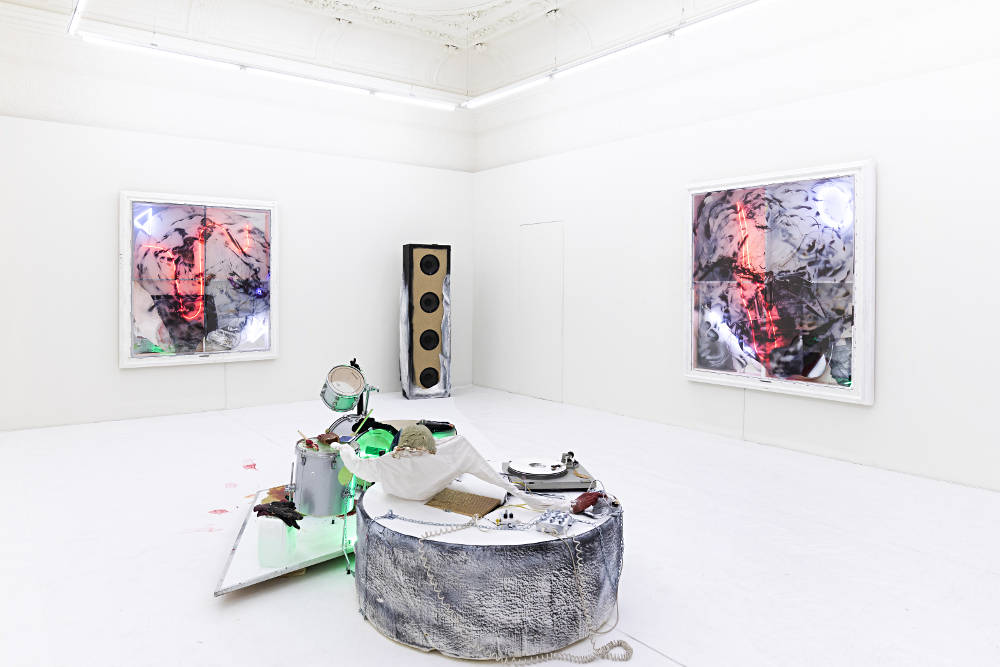 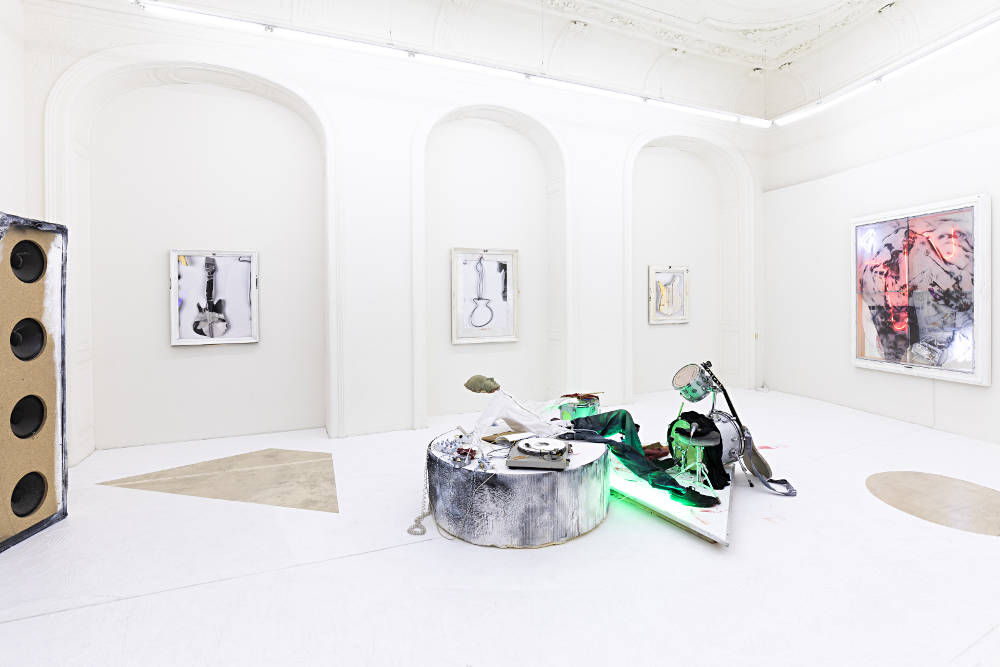 Joris Van De Moortel’s artworks are often constructed as resounding boxes, which are constituted by the relics of past musical performances. As a musician, he indeed plays and performs on stage and then uses the music instruments and sometimes also parts of the stage to build the final artworks. By deconstructing the instruments and objects used for the performance and then reassembling them, he cathartically gives his own interpretation of ready-made, finding a balance between order and chaos.

The exhibition displays a selection of his “boxes”, which are part of a previous musical performance. A sculpture produced during the concert-performance is remaining on stage as an archive of the past performance as the musicians were being cast during the concert. The performance piece is similar to a sacred rite with biblical metaphors. The seven elements: glass, smoke, fire, wax, white, nature, vandalism are representing sacraments.
The video of the performance can be seen in the exhibition. The artist emphasizes the music, the listening part for the spectator who through the smoke and fog is hindered in seeing clearly.
The artist will hold a speech about the record and songbook produced, which will also be available to the public.

If our world had always been blanketed in fog,
we would probably make little use of sight, and rely on our ears instead.
(Mike Goldsmith)

What is the sound of white smoke? Can one capture the sound of opaque air? Vapour? Smog? Vog? Fog? As everything in life is an exercise, in reference to what we know or about to discover, this is nothing more or less, in an aural and visual form. “The Sound of White smoke” could be also proverb, in reference to something else, something we can’t see, hidden, a situation we can’t control.
Smoke is all round, sometimes harmless, sometimes life threatening: war zones: volcano eruptions: natural disasters: morning mist: theatres: clubs, it’s a mystic thing, a mood, a setting, which blurs the sight and lets us focus on our ears.
Joris Van de Moortel was born in 1983 in Oostakker-Lourdes, Belgium. He lives and works in Antwerpen. 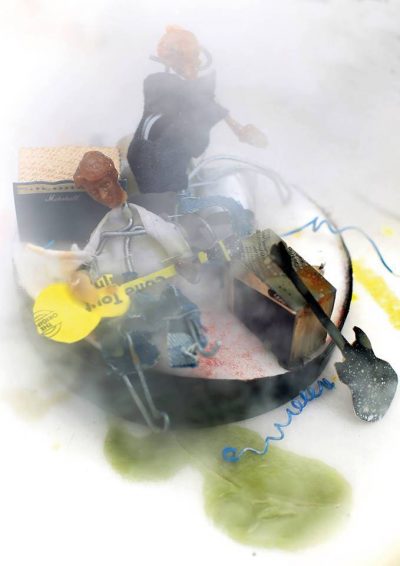