Jordan Nassar: I Cut The Sky In Two

Jordan Nassar: I Cut The Sky In Two

James Cohan presents I Cut The Sky In Two, an exhibition of new work by Jordan Nassar. This is the artist’s first solo exhibition with James Cohan. 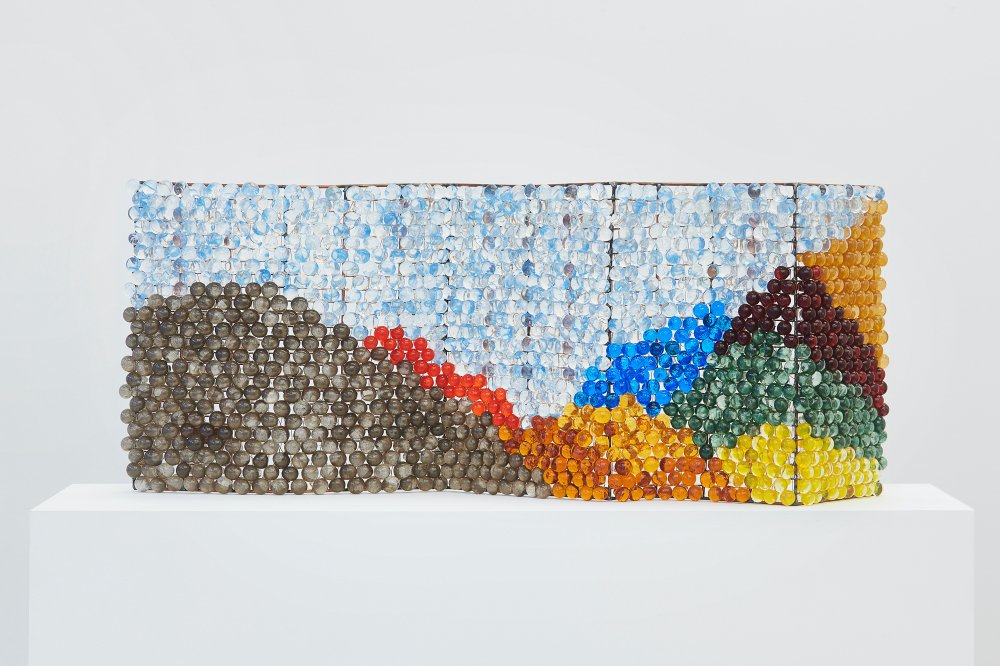 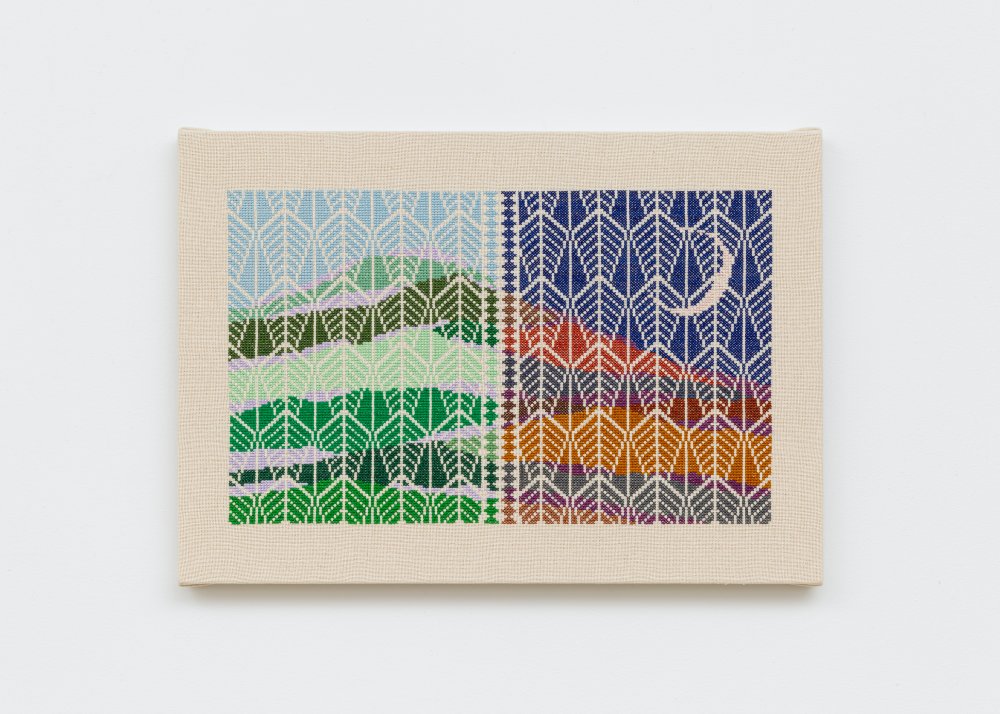 Jordan Nassar
A Green Sun Before A Lunar Sun, 2020 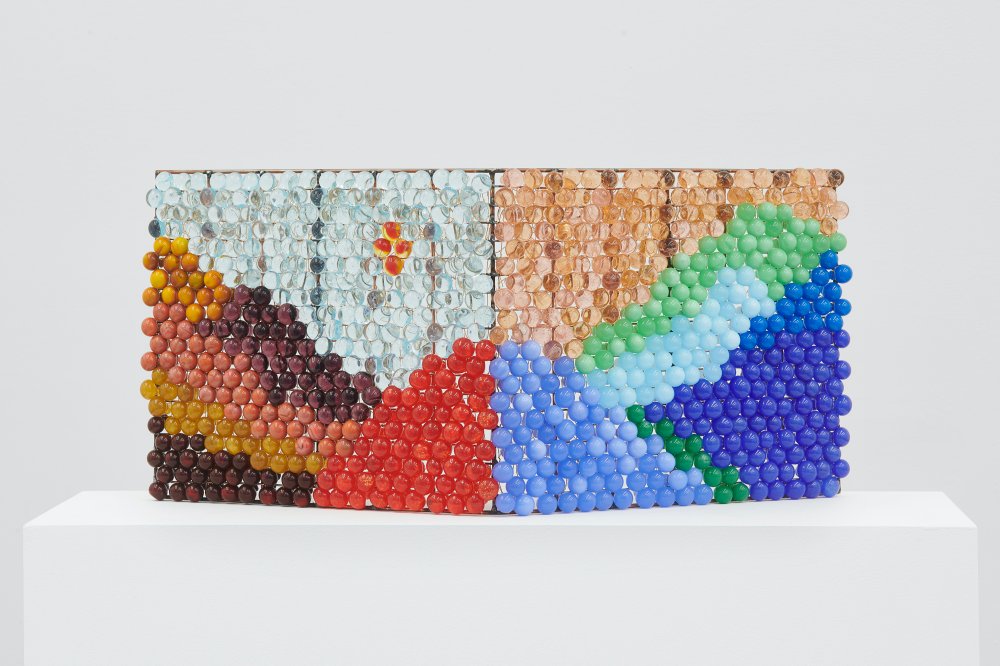 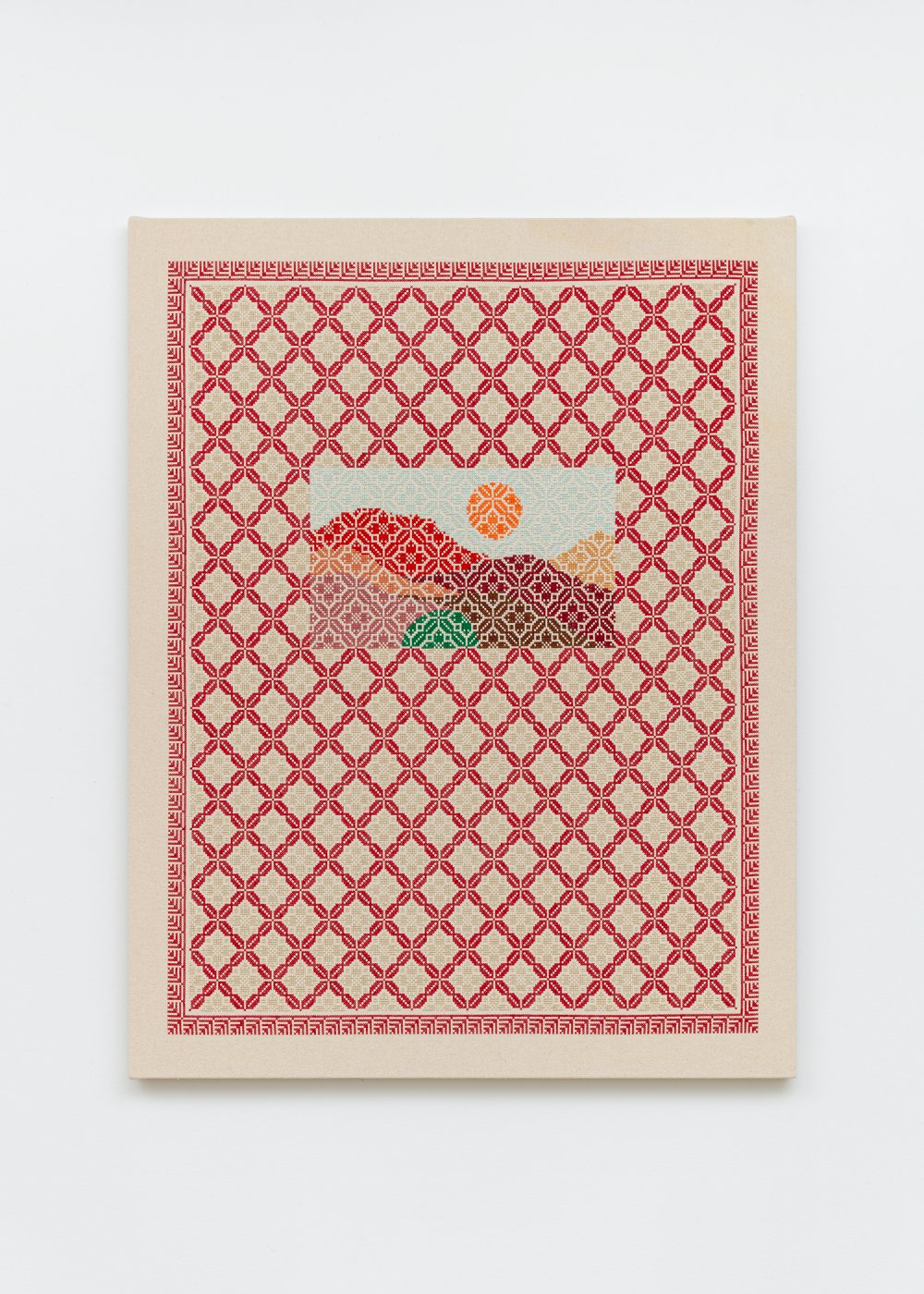 Jordan Nassar
In The Heart Of The Rose, 2020 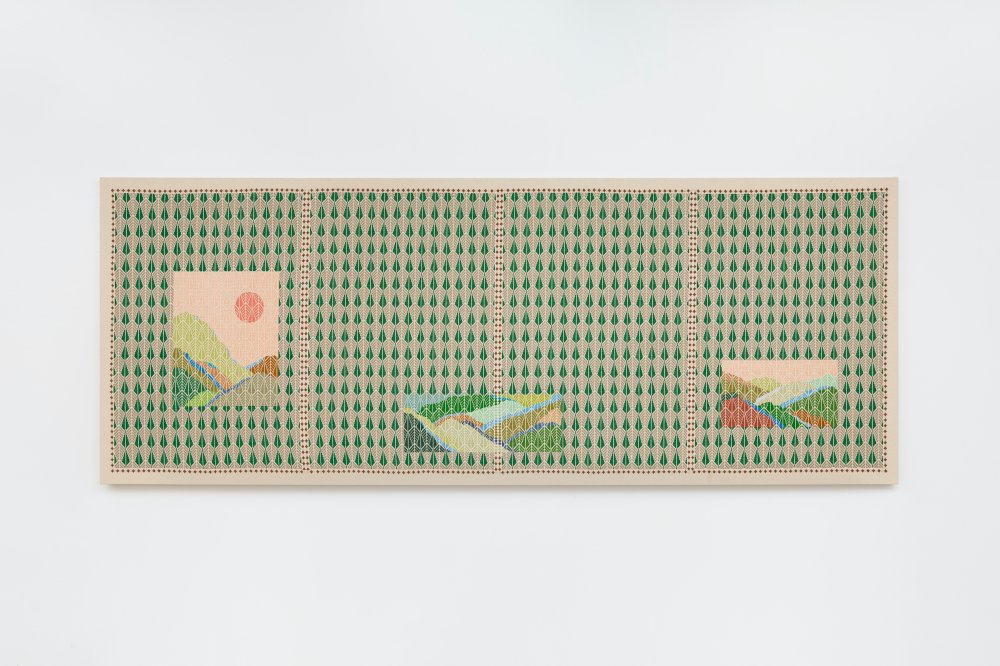 Jordan Nassar
A Stream Is Singing Under The Youthful Grass, 2020 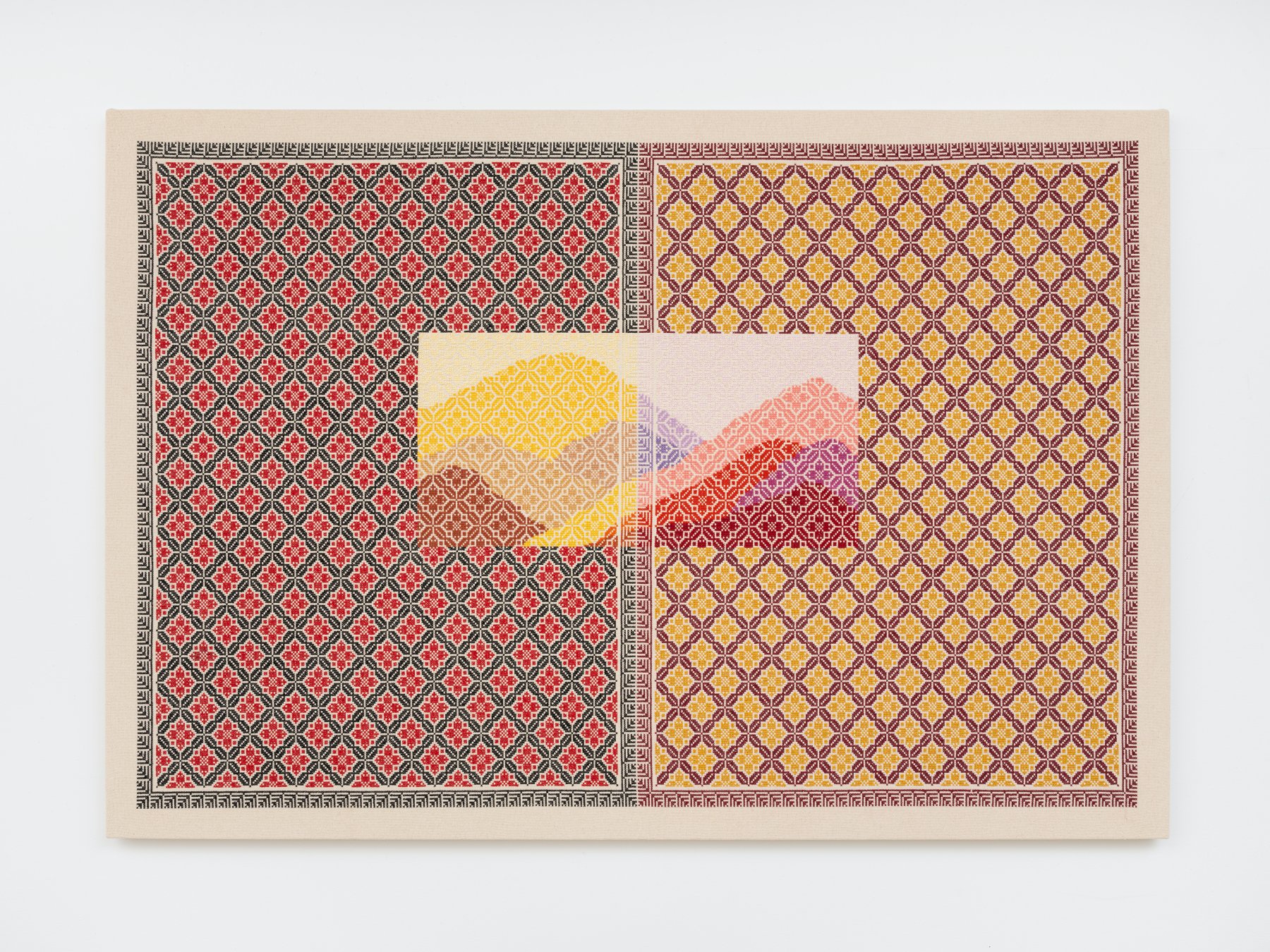 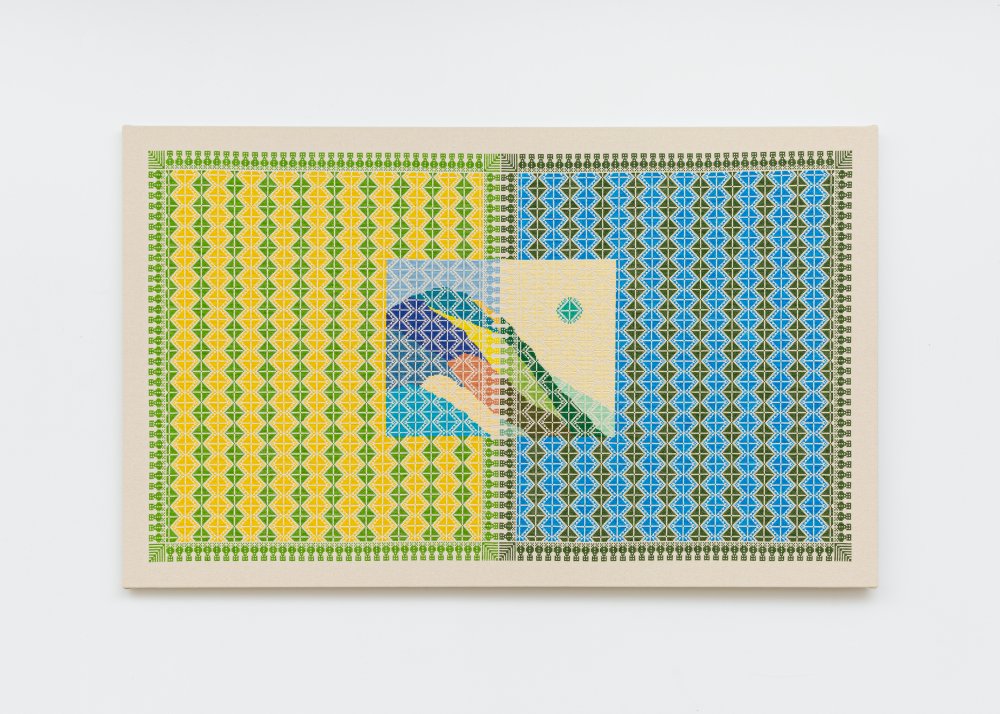 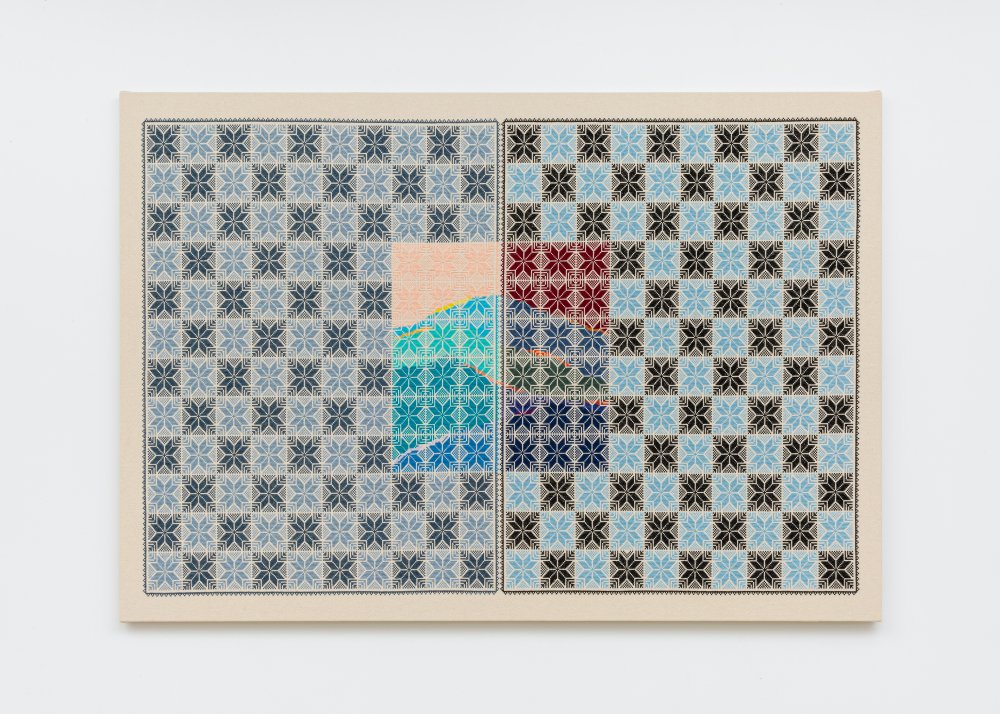 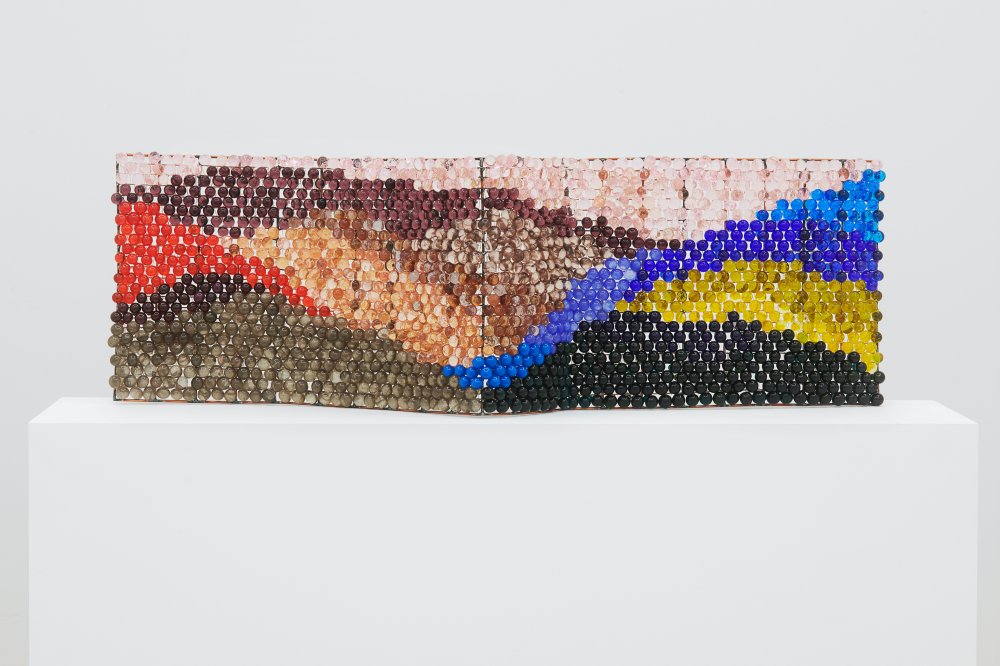 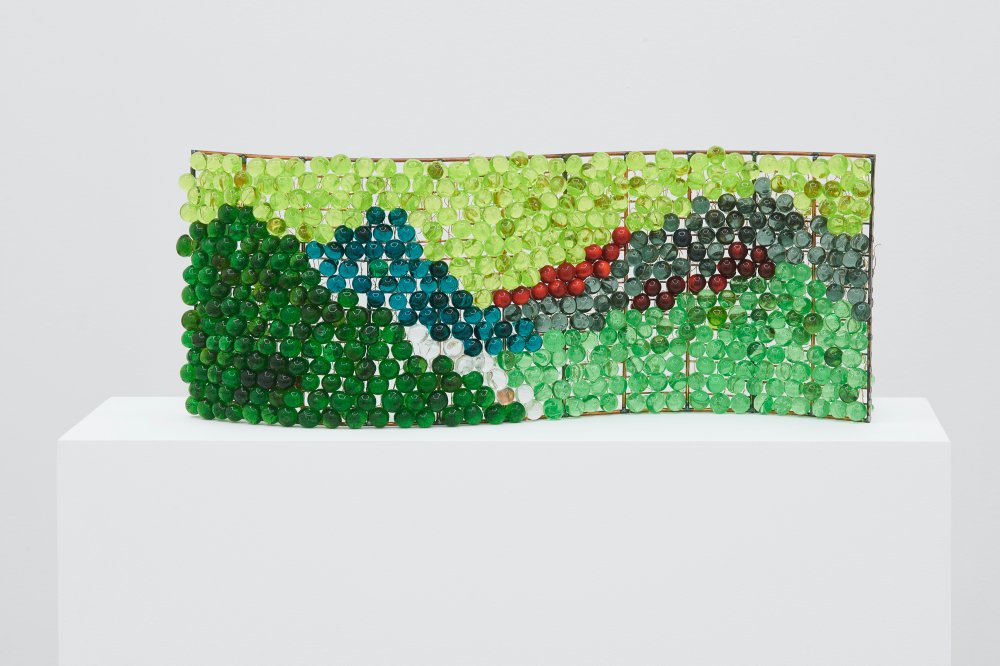 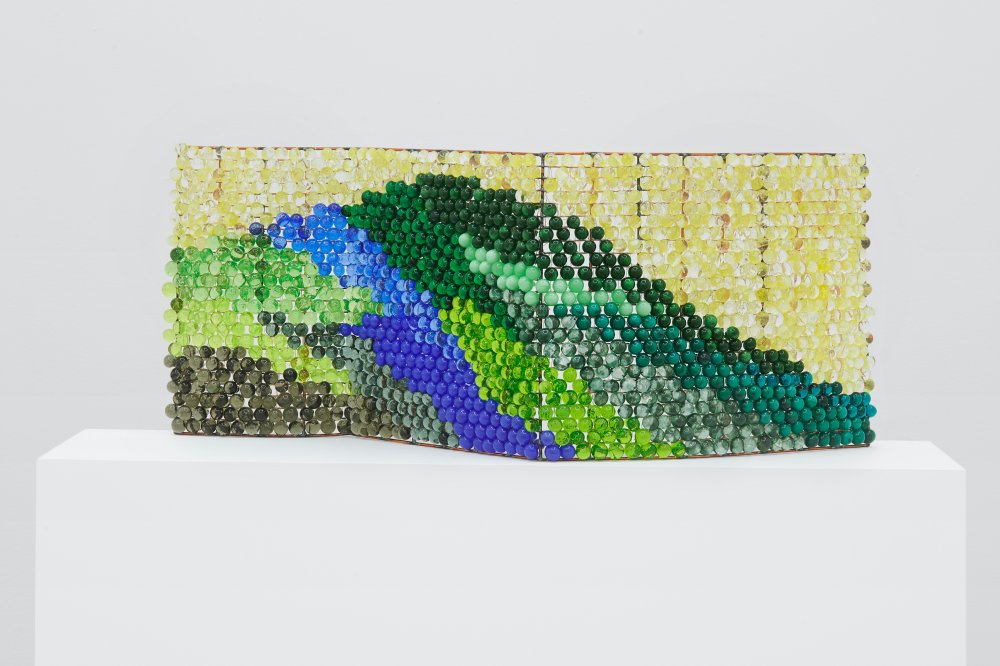 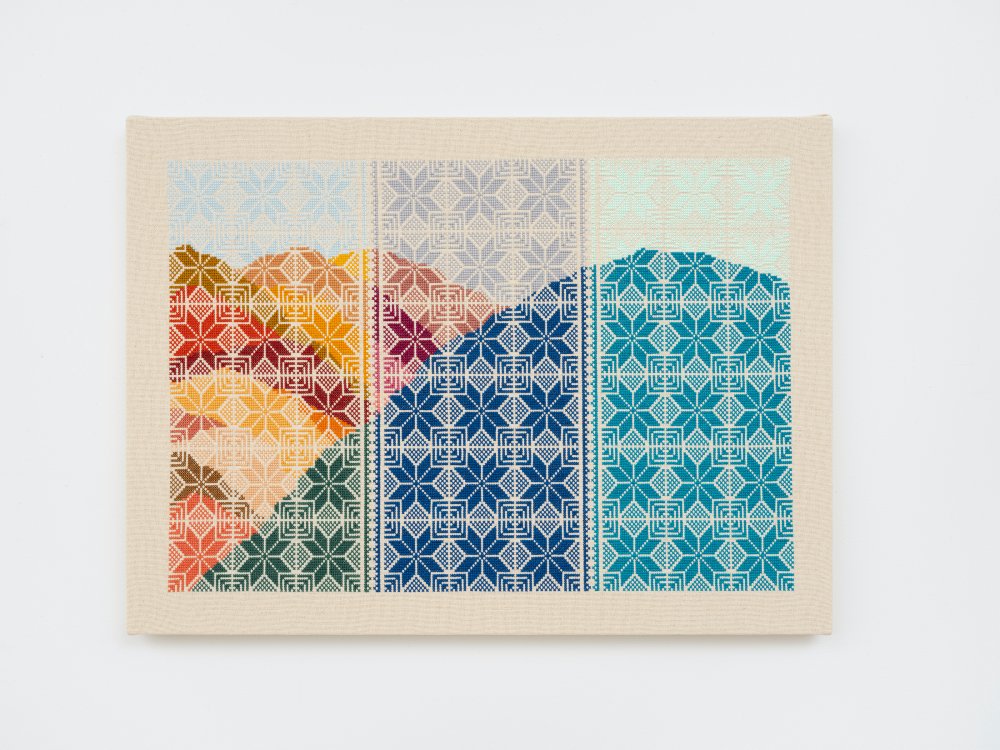 Jordan Nassar’s hand-embroidered works address intersecting fields of craft, ethnicity and the embedded notions of heritage and homeland. Nassar uses geometric patterns characteristic of Palestinian tatreez—most often found on pillows, clothing, and other domestic textiles. The artist grew up in a home decorated with such objects. As he notes, “Growing up in the diaspora, much of Palestinian culture was experienced materially.”

This exhibition expands Nassar’s ongoing exploration of object, memory, and place, while introducing new levels of experimentation and craft techniques. I Cut The Sky In Two comprises two bodies of work: hand-embroidered wall works and flame-worked glass bead sculptures, a new element to the artist’s practice. Nassar’s hand-stitched imagery is stretched and framed to bring the work into dialogue with painting. His abstracted, imaginary landscapes are reflective of his own experience navigating both the physical and metaphorical distance of the Palestinian diaspora and its inherited nostalgia.

Nassar has created a series of “split-screen” embroidered landscapes with shifting colorways. Tonal changes at the midpoint of the canvases interrupt the horizontality of the landscape, creating juxtapositions of color and form. These double compositions are a physical expression of what Nassar terms, “the dislocating experience of being in two places simultaneously.” Lines function as borders that bleed into each other, threaded across the field of the image.

Nassar collaborated with craftswomen living and working in Ramallah to create two monumental, multipanel embroideries inspired by paired elemental forces: earth/water and fire/air. The craftswomen lay the foundations of his panoramas and Nassar then embroiders multicolored landscapes within their intricate geometric grids; creating a dialogue through an exchange of visual ideas. Nassar has doubled the size of his past work to create these four-panel works, each with a patterned border that contains sections of a continuous landscape.

In a series of new sculptures, Nassar utilizes traditional glass-working techniques made famous in Hebron, a Palestinian city in the southern West Bank. These intricate landscapes are made by wiring thousands of handmade glass beads—most of which he flame-worked himself—onto custom-built steel frames. The sculptures are named for the gates of the Old City in Jerusalem, their forms are modeled on sections of the ancient walls. In Bab Al-Zuhur (Gate of Flowers), sloping red and earth-toned hills cascade across the zig-zagging metal frame which houses the beads. Much like Nassar’s embroideries, these landscapes follow a grid pattern that is mapped out in advance. The varied opacities of differently colored beads allow Nassar to create moments of transparency that transform a solid wall into an entry point. He likens these works to portals in which the structure becomes a site for the projection of imagination, rather than simply an obscuring or delineation of the landscape. At the same time, they evoke the long tradition of screens and transparencies in domestic spaces of pan-Arab architecture.

Nassar frequently draws upon the connection between image-making and language. The inspiration for the title of the exhibition, as well as titles of the embroidered works on view, stems from the surreal poem The Arab Apocalypse, written by Lebanese-American artist and poet Etel Adnan in response to the outbreak of the Civil War in Lebanon. The embroideries themselves are hazy and dreamlike visualizations of Adnan’s poetry. In A Yellow World A Blue Sun, two skies exist simultaneously, split into two shifting yellow and blue colorways. Further intertwining image and language, Nassar has made a limited-edition risograph zine to accompany the exhibition.

Jordan Nassar (b.1985, New York, NY) earned his BA at Middlebury College in 2007. His work has been featured in solo and group exhibitions globally at institutions including the Whitney Museum of American Art, New York, NY; BRIC, Brooklyn, NY; Museum of Arts and Design, New York, NY; Abrons Art Center, New York, NY; Katonah Museum of Art, Katonah, NY; Anat Ebgi, Los Angeles, CA; Evelyn Yard, London, UK; Exile Gallery, Berlin, Germany, and The Third Line, Dubai, UAE. Nassar was the subject of two institutional solo presentations in 2019: Jordan Nassar: Between Sky and Earth at Art@Bainbridge at Princeton University Art Museum and The Sea Beneath Our Eyes at the Center for Contemporary Art (CCA) Tel Aviv. Nassar’s work is currently on view in the exhibition Making Knowing: Craft in Art, 1950 – 2019 at the Whitney Museum of American Art. Upcoming exhibitions include the Asia Society Triennial: We Do Not Dream Alone in New York, opening on October 27, 2020 and a solo exhibition at KMAC Museum in Louisville, Kentucky opening this winter.