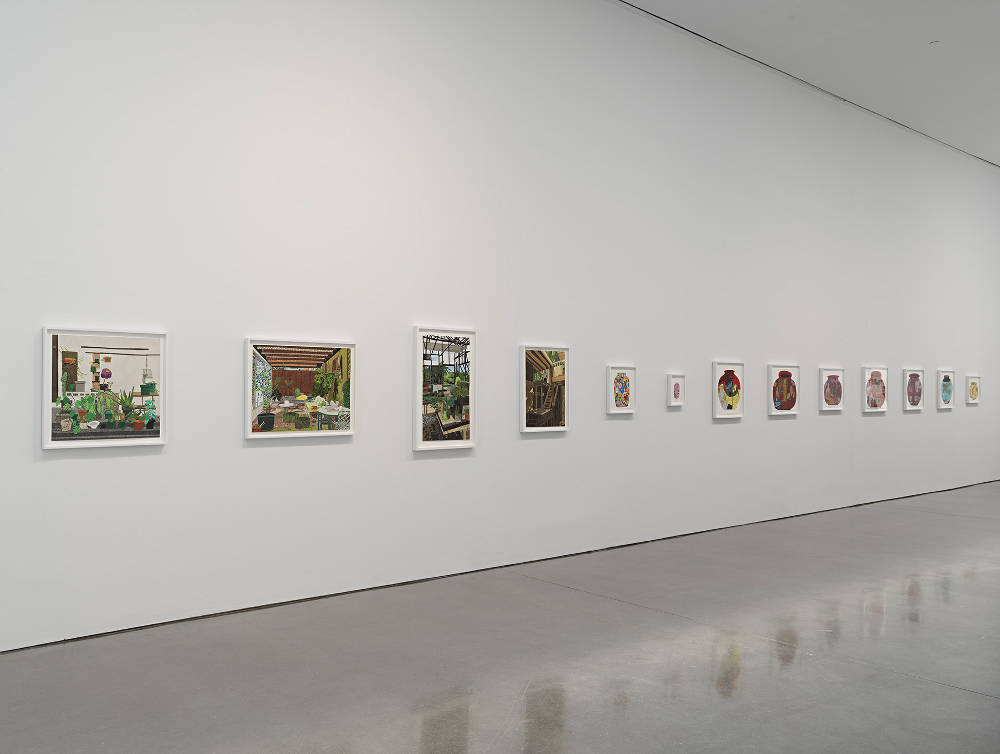 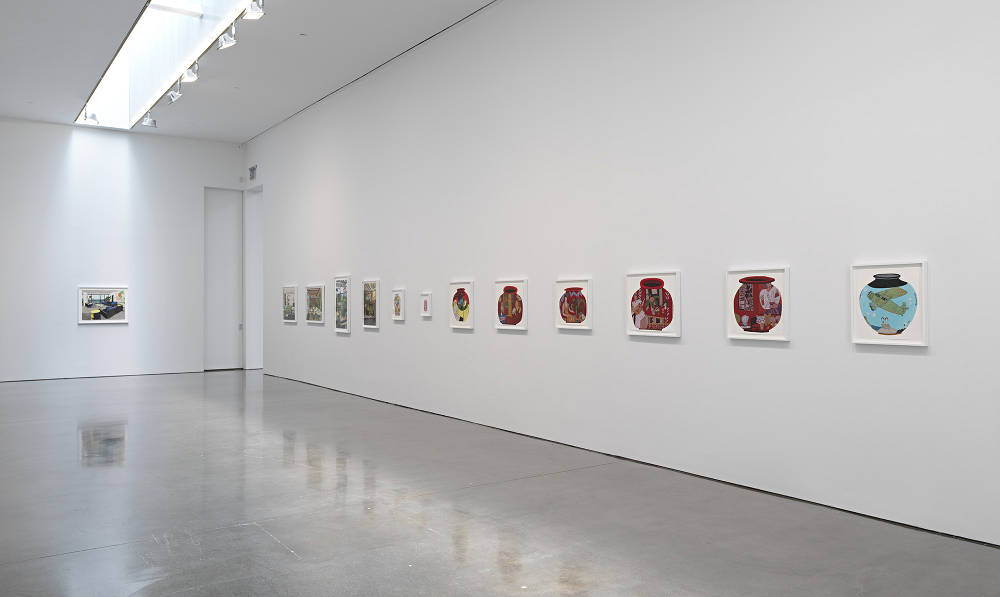 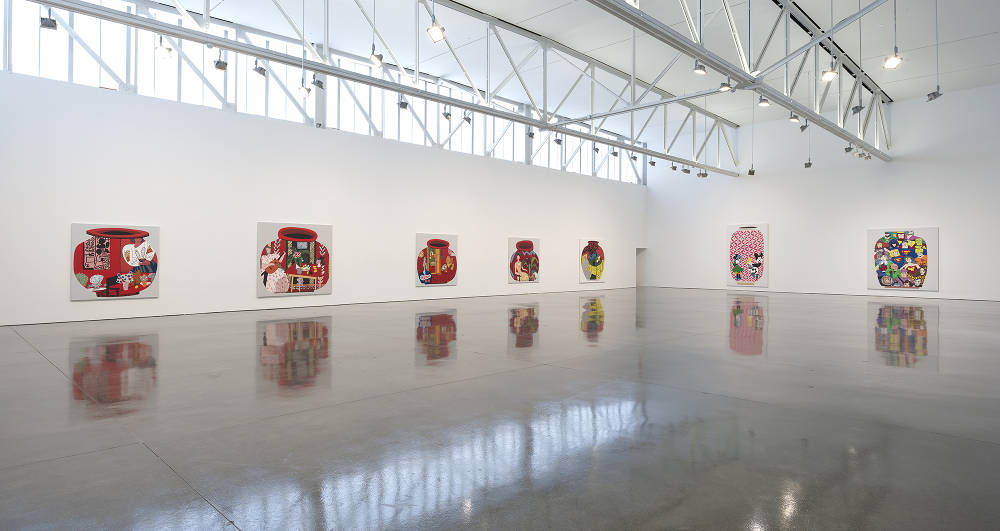 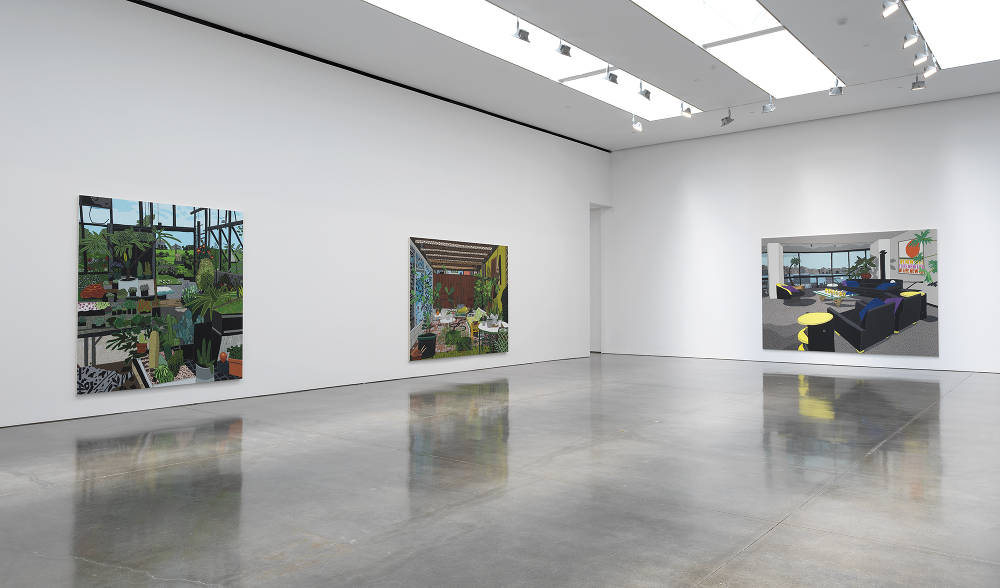 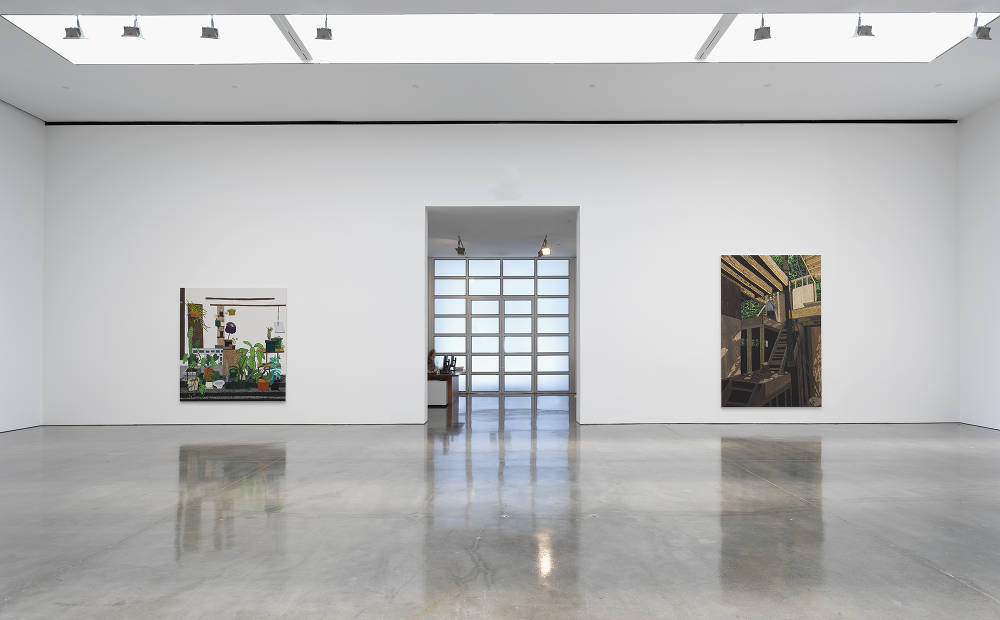 In his boldly colored graphic works, Wood combines art historical references with images of the objects, interiors, and people that comprise the fabric of his daily life. Translating the three-dimensional world around him into pure color and line, he confounds expectations of scale and vantage point, causing the flat picture plane to bristle with an abstract charge.

One room of this exhibition is dedicated to a series of new paintings of architectural interiors and exteriors. Wood composes these through a process of layering and collaging, using photography, projection, drawing, and then painting. Sources are translated and mixed into generations, which then become the basis for the large-scale paintings. The “seams” are dissolved in the final work, even if the impression of an assemblage remains palpable. Images of Wood’s family members and domestic surroundings recur in his paintings, revealing the importance of familial dynamics in shaping time, space, and identity. For example, Young Architect (2019) is based on a photograph from the mid-sixties in which Wood’s father stands on a construction site where timber beams cross over each other, their grain echoing the forms made by the living trees visible behind. In Inglewood Listing (2019), Wood has painted the quiet scene of a room, based on a photograph from the original real estate listing of his home from the early 2010s, which contains similarly grained timber beams and green foliage. Set more than fifty years after the photograph taken of his father, it contains a sense of autobiographical nostalgia rendered through the depiction of living space.

Wood’s technical mastery of patterning and compositional structure is particularly evident in his depictions of pots and ceramic vessels, which, devoid of depth and shading, sit in stark contrast to gray tonal backgrounds. Turned into planar spaces for imagery, each pot becomes a painting within a painting. Several of the depicted vessels draw from the work of Henri Matisse. While early examples of Matisse appropriations have previously appeared in collaborative exhibitions with Shio Kusaka (Wood’s wife) at Gagosian Hong Kong (2015), and at Museum Voorlinden, Netherlands (2017–18), this exhibition introduces the largest group to date. Wood’s translations of Matisse paintings here include Moroccan Landscape (1912), with its muted purples and blues, and several iconic works featuring bright red backgrounds, such as The Lute (1943), Interior with Black Fern (1948), Red Interior, Still Life on a Blue Table (1947), and Interior in Venetian Red (1946)—the latter two of which Wood has fused together within the contours of a single pot.

Wood also represents vessels and imagery by contemporary ceramists, including Michael Frimkess and Magdalena Suarez Frimkess. In M.S.F. Fish Pot #7 (2016), a hollowware pot decorated with fish and marine flora is rendered as a flat, round plane. Lacking a single focal point, the shapes form a familiar yet chaotic jumble, turned, in typical Wood style, into an organized system of color and plane.

Each painting in the exhibition is accompanied by a corresponding small-scale work on paper, emphasizing Wood’s mastery of kaleidoscopic shifts, while reiterating visual and referential relationships across discrete bodies of work.

The exhibition will be accompanied by a fully illustrated catalogue.

Wood’s first solo museum exhibition in the United States in almost a decade opened on March 24 at the Dallas Museum of Art and will close on July 14, 2019.