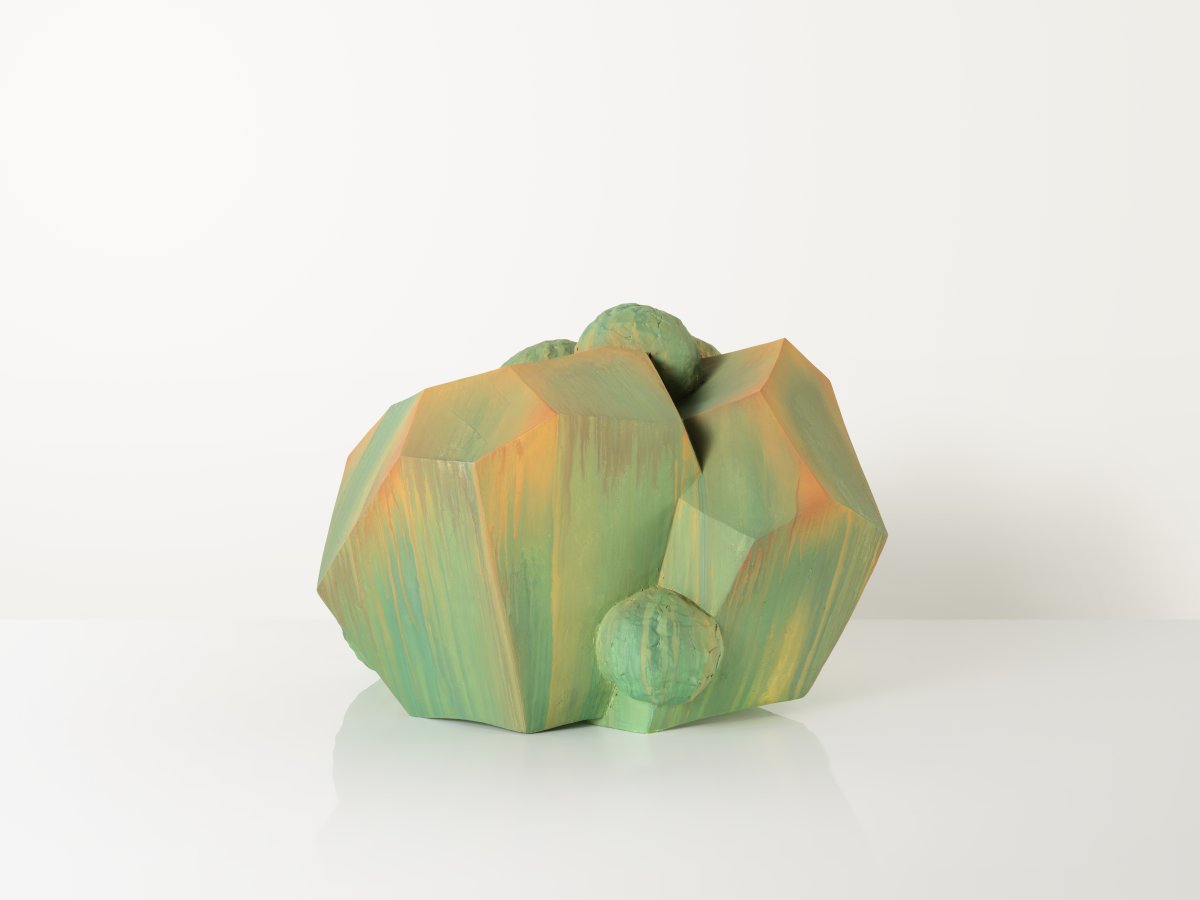 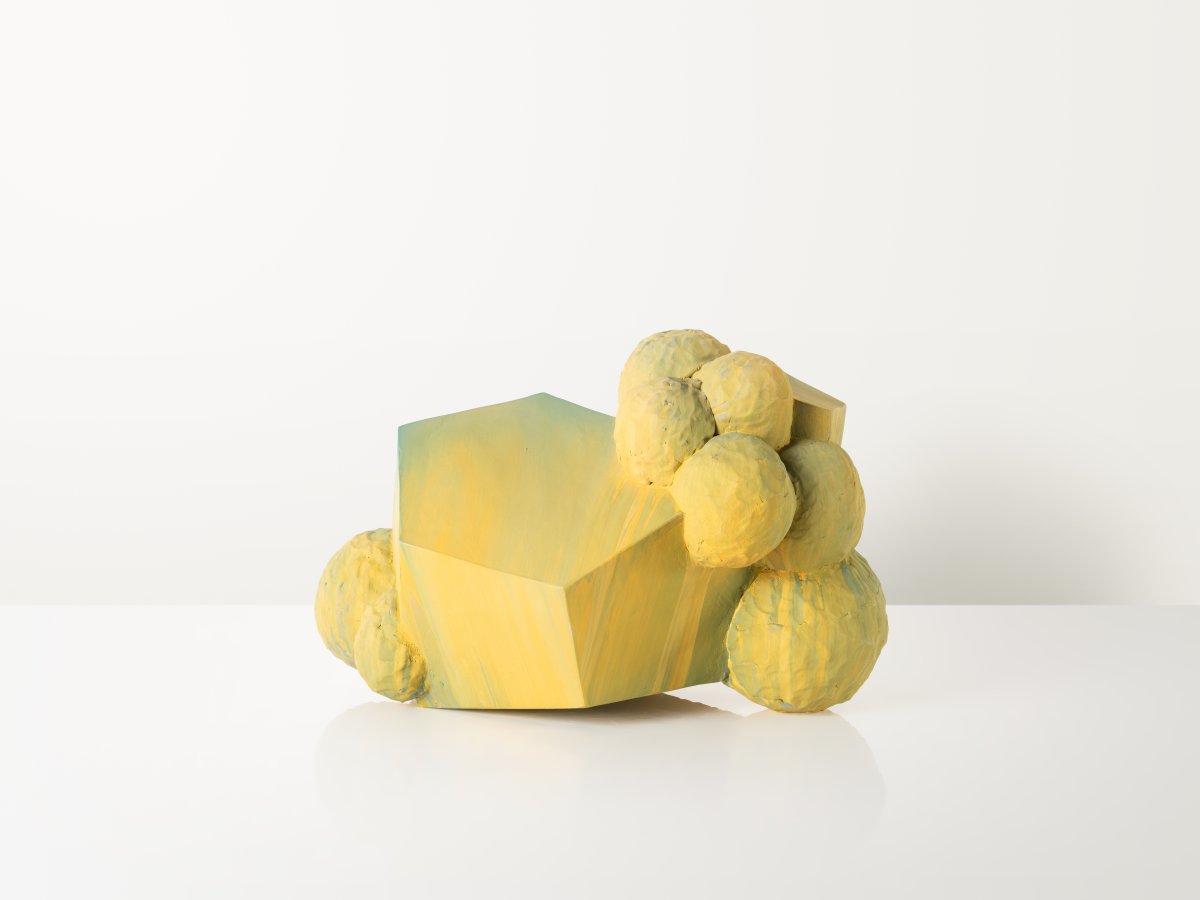 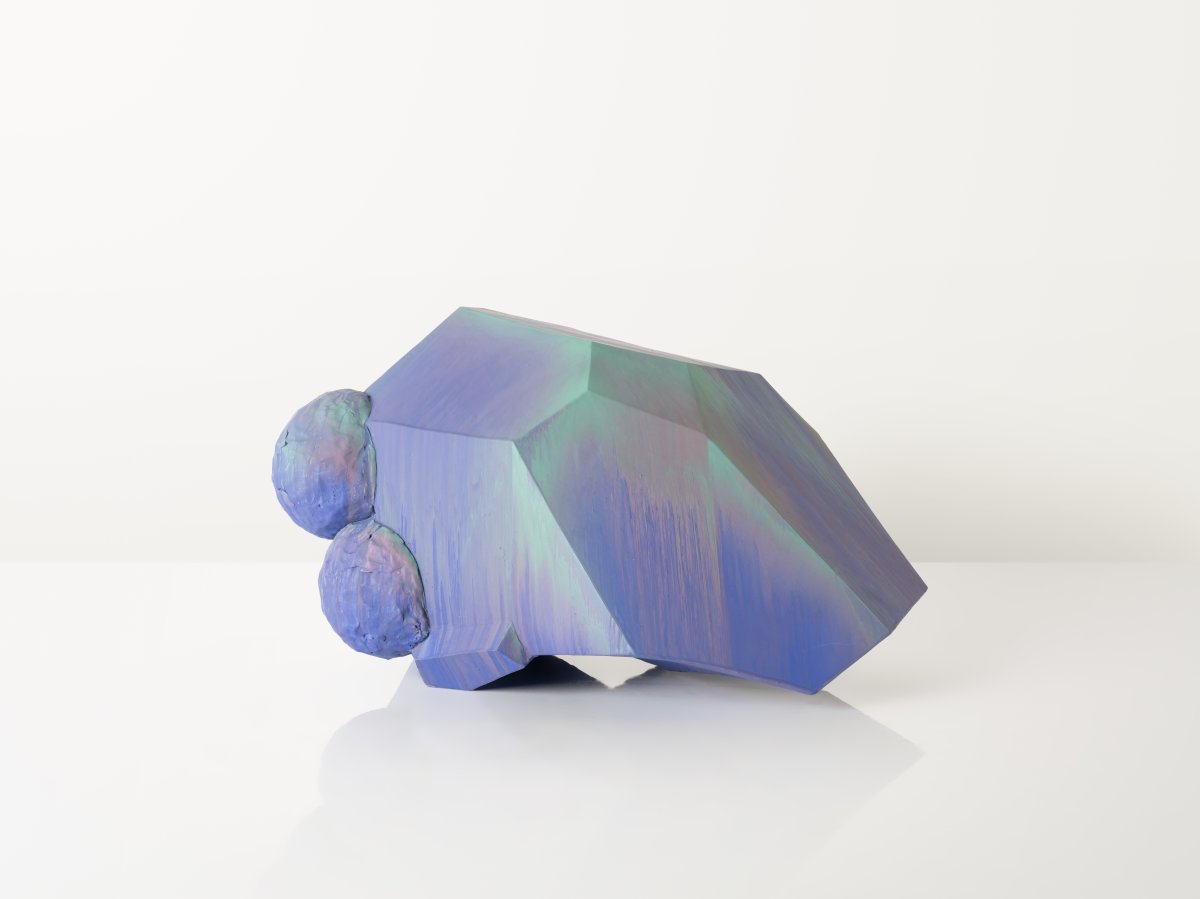 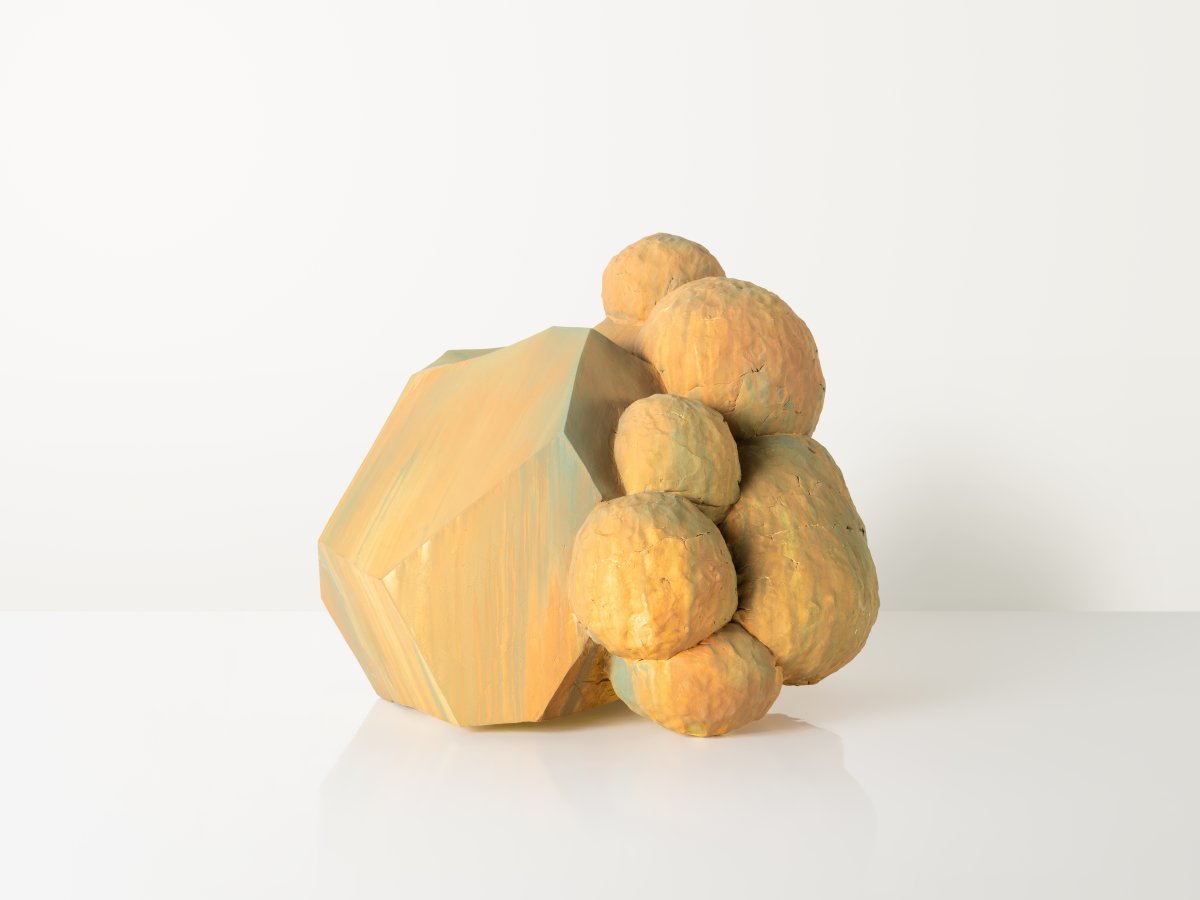 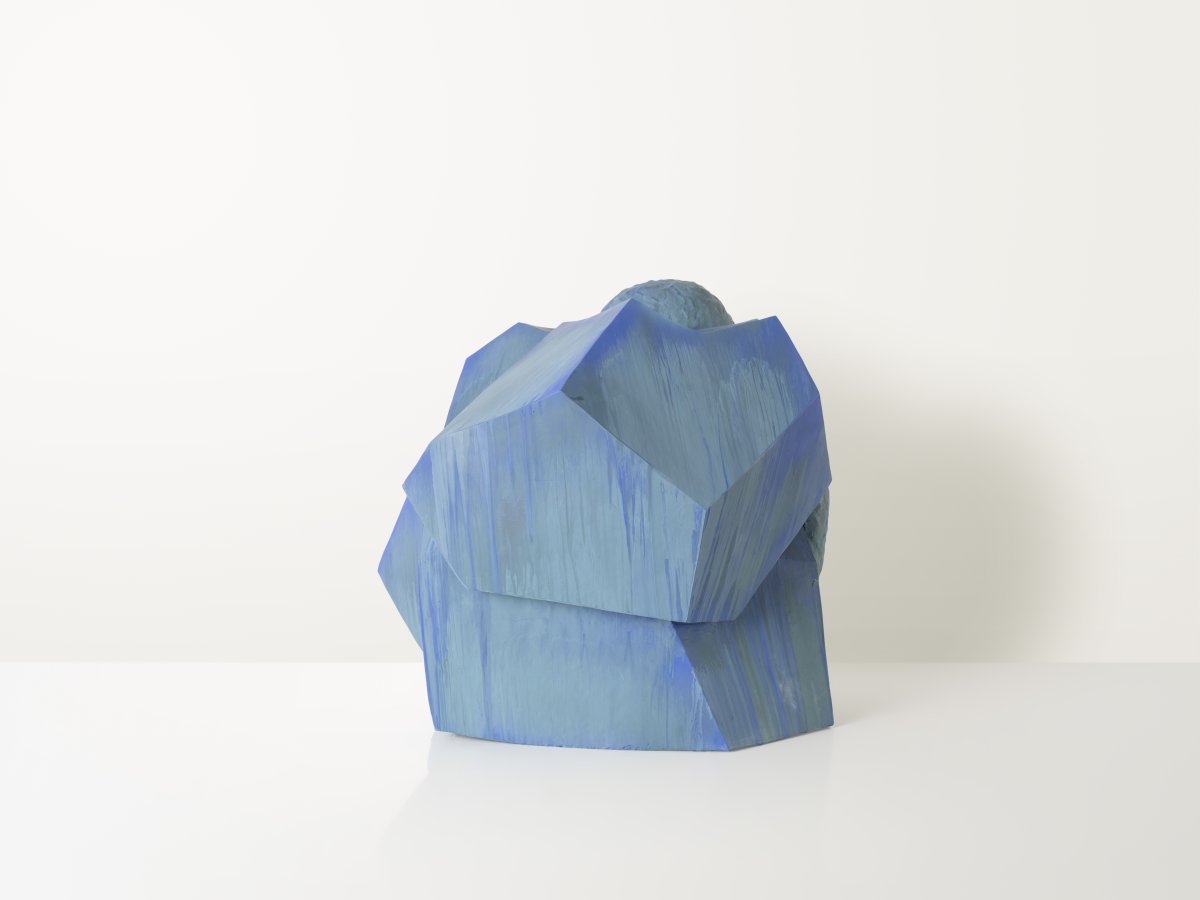 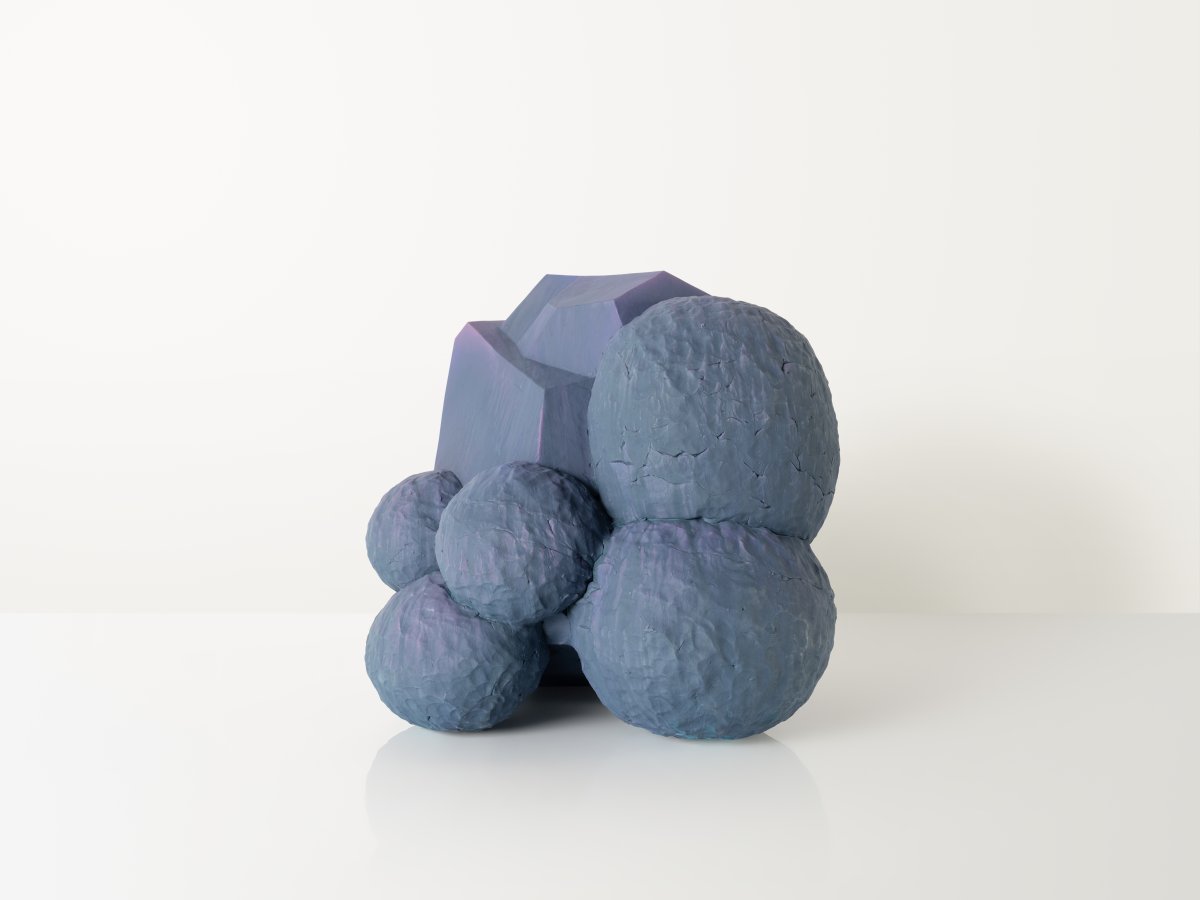 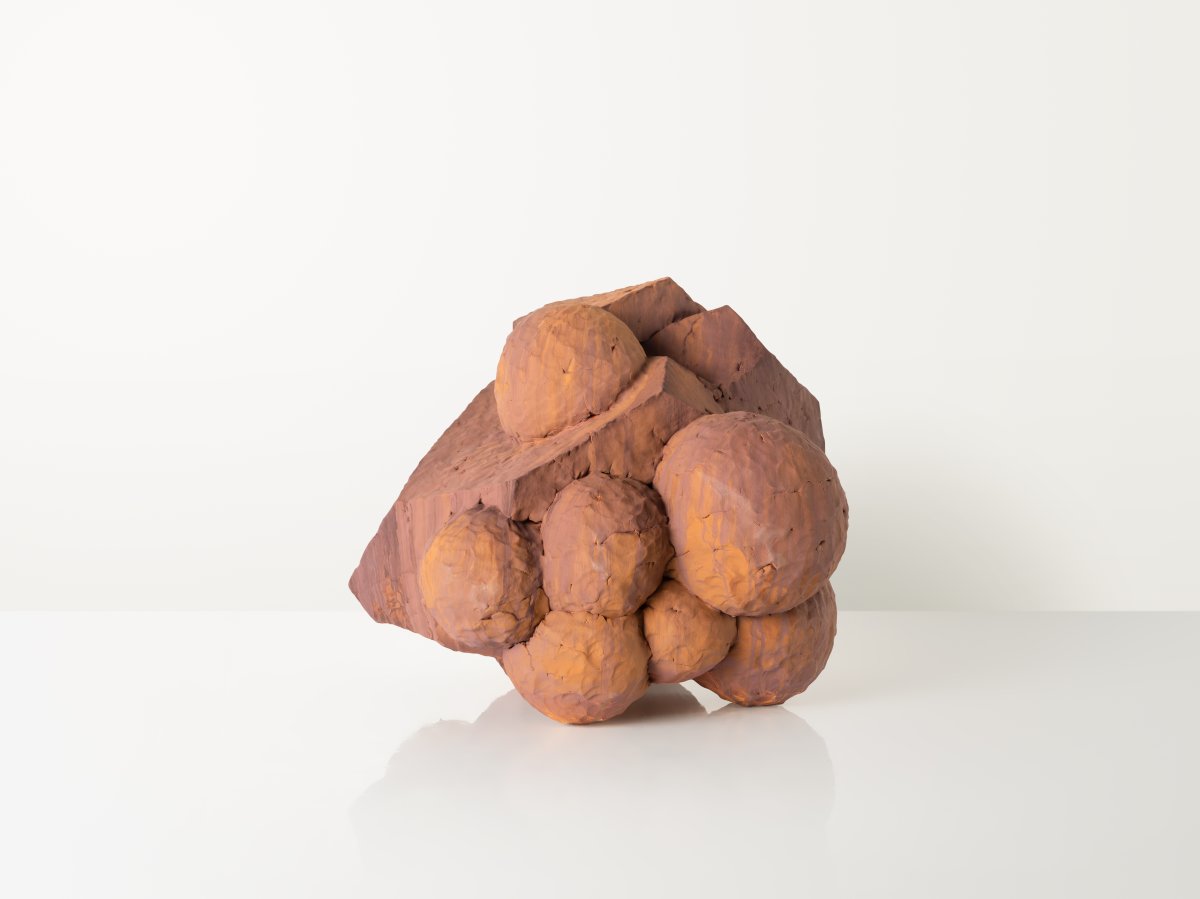 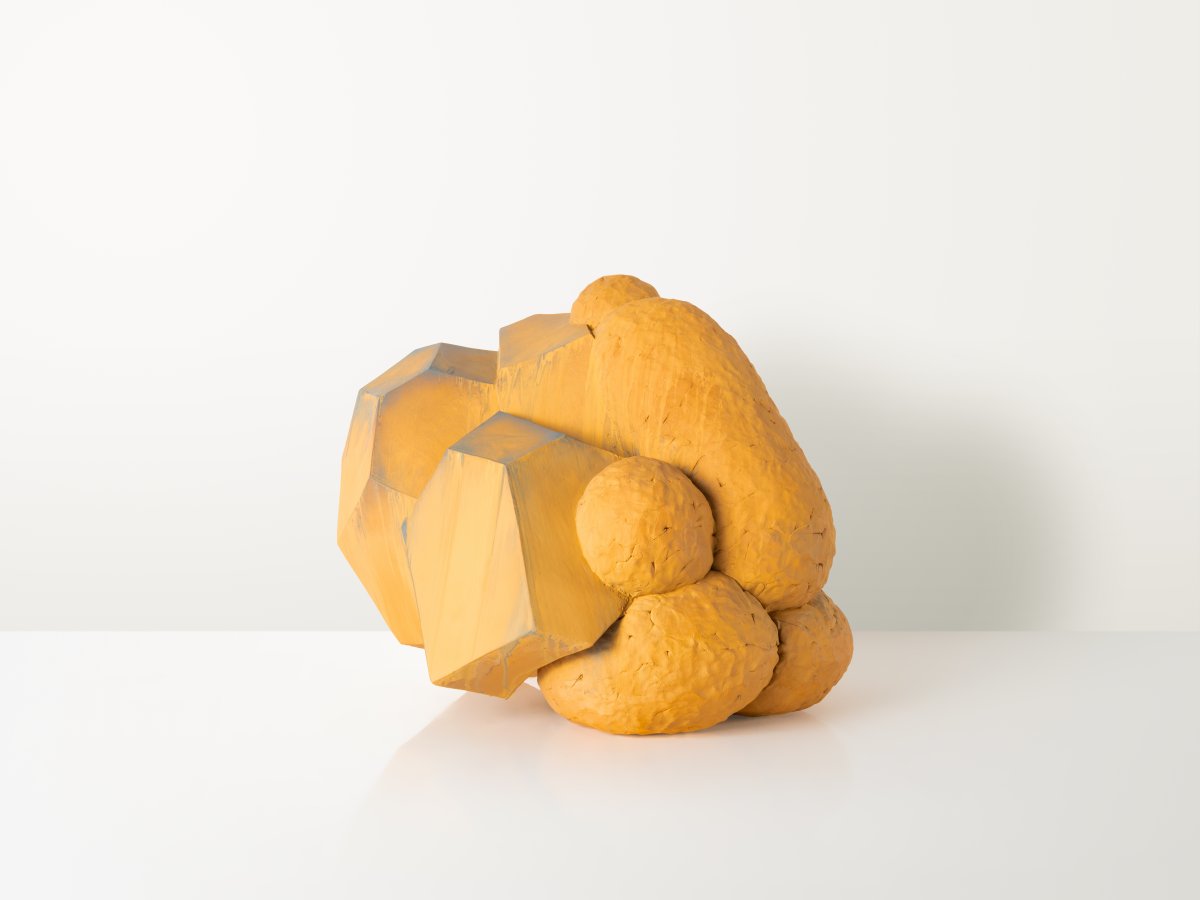 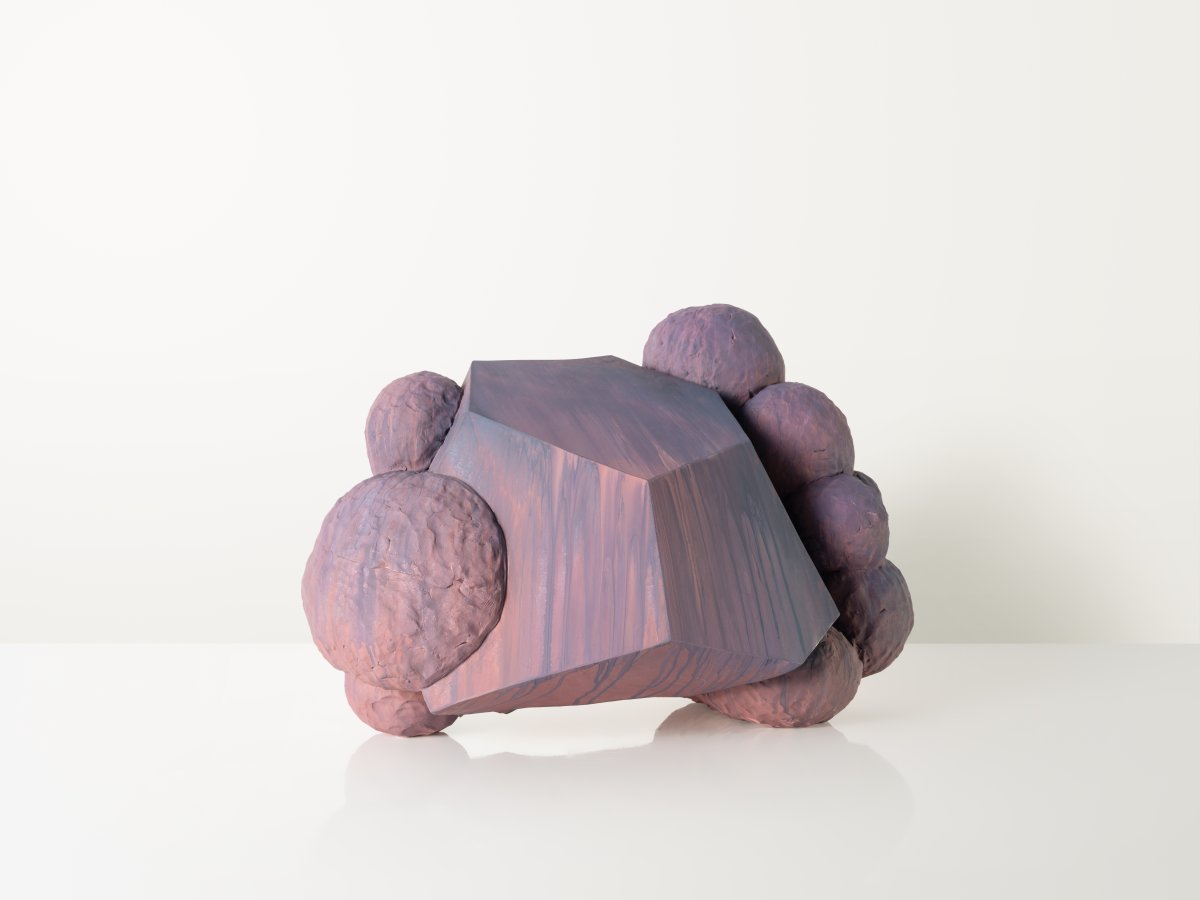 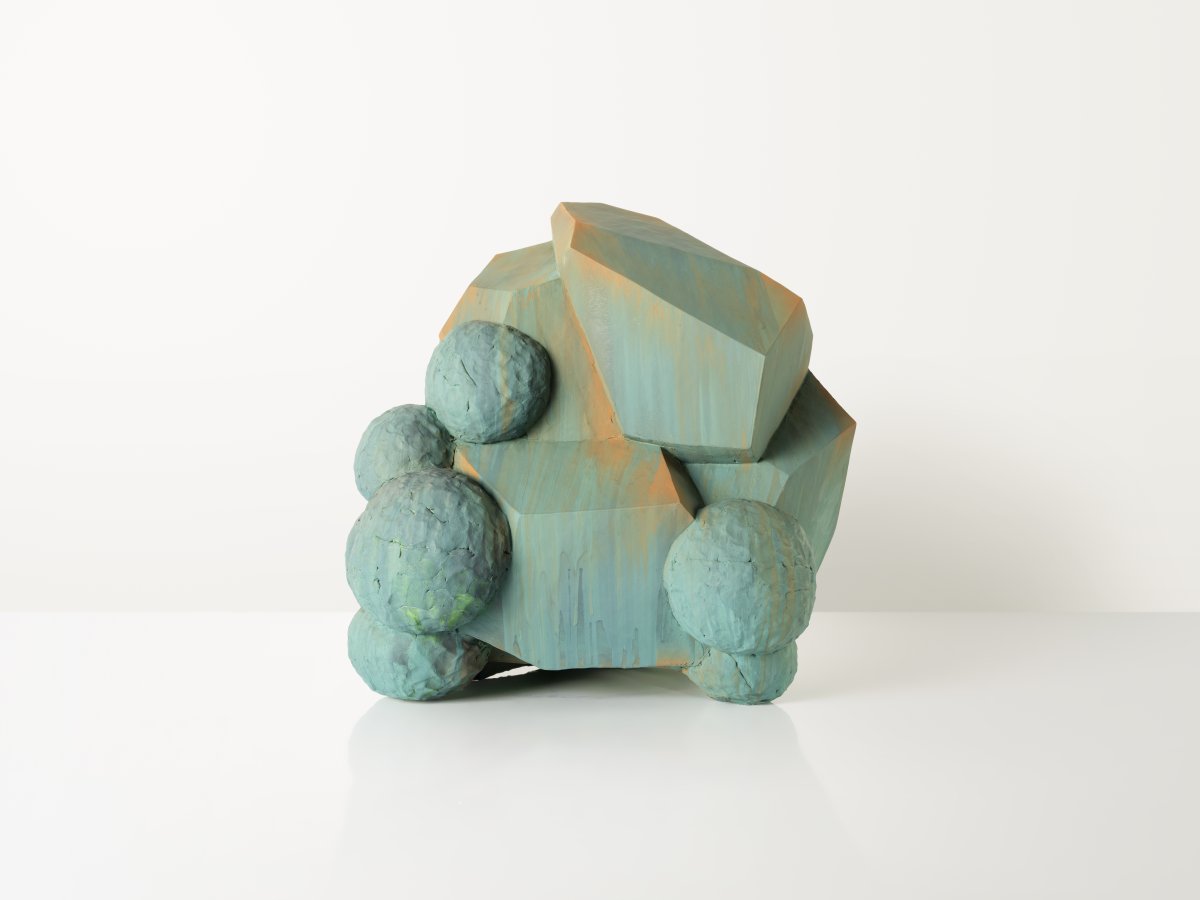 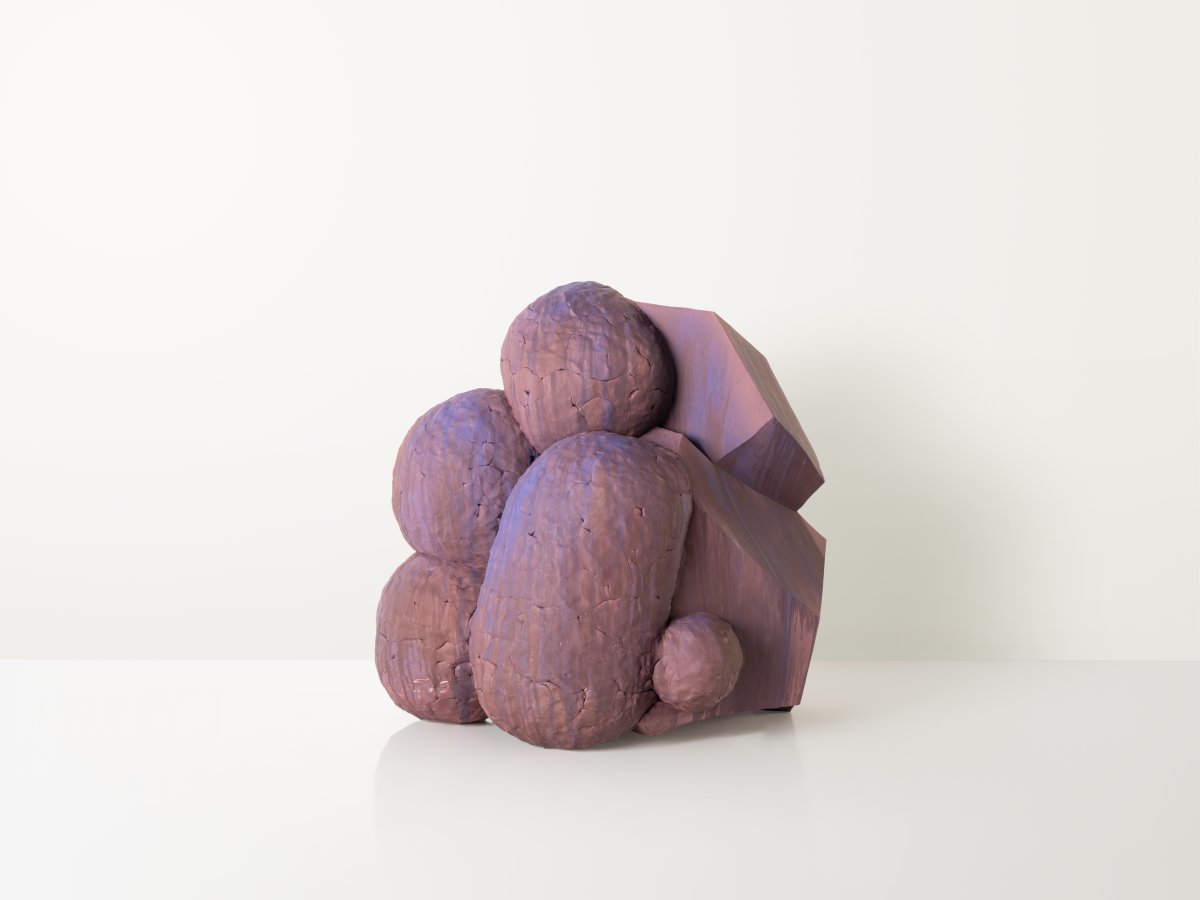 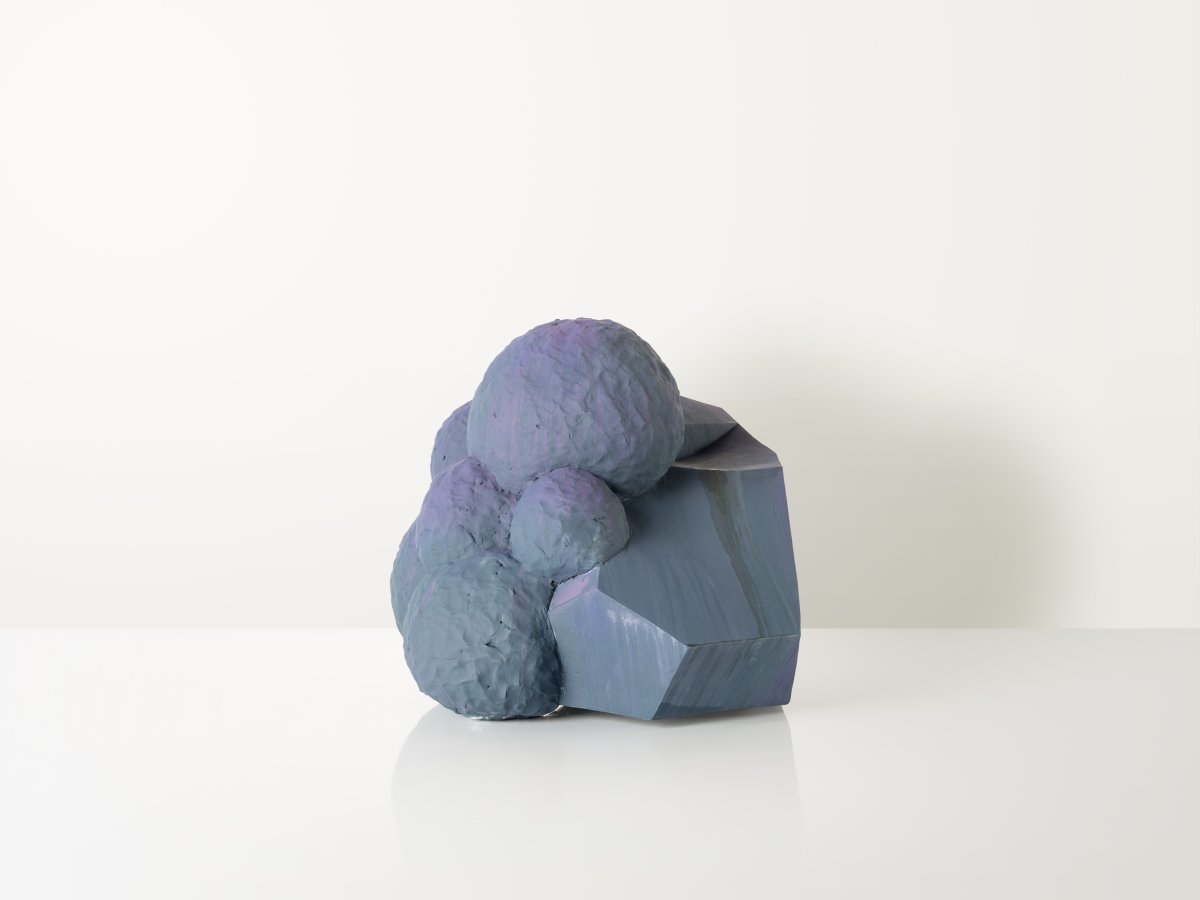 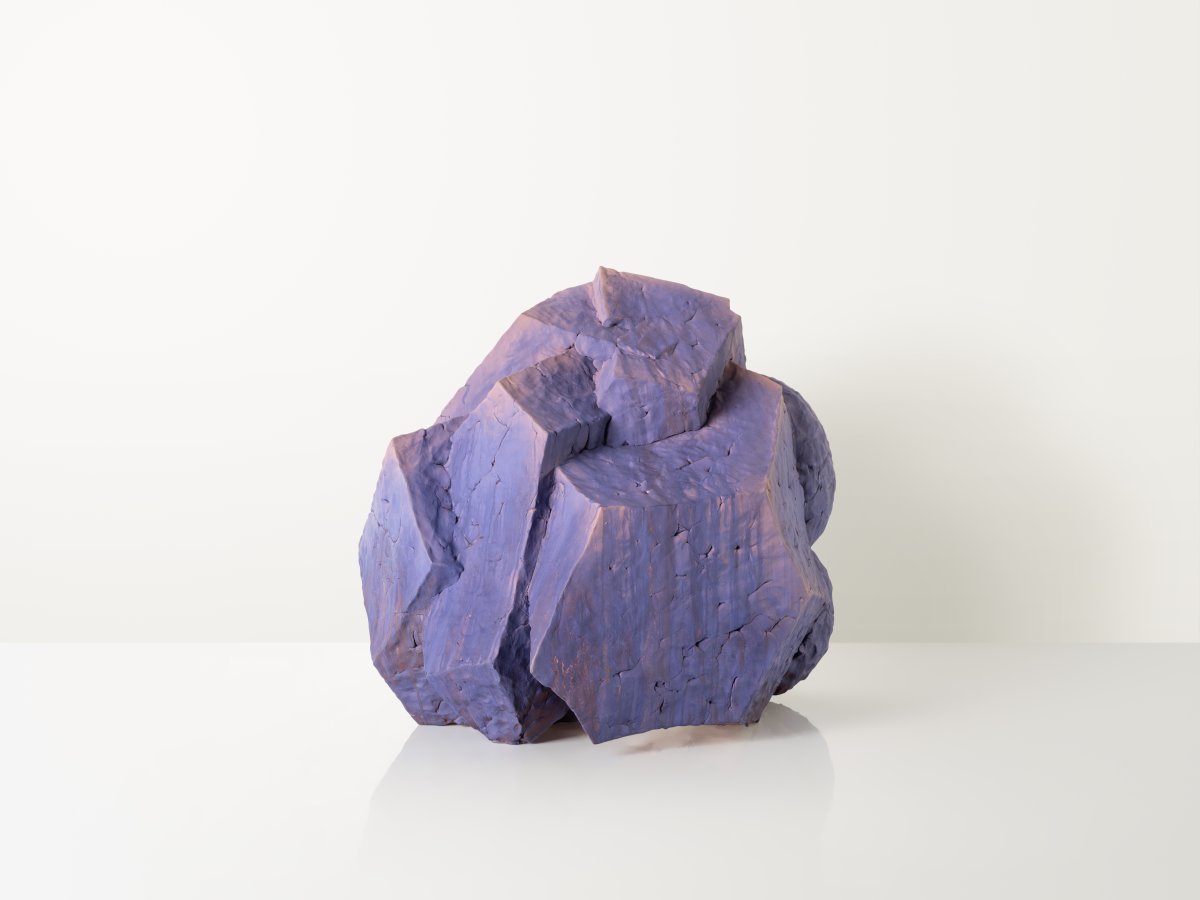 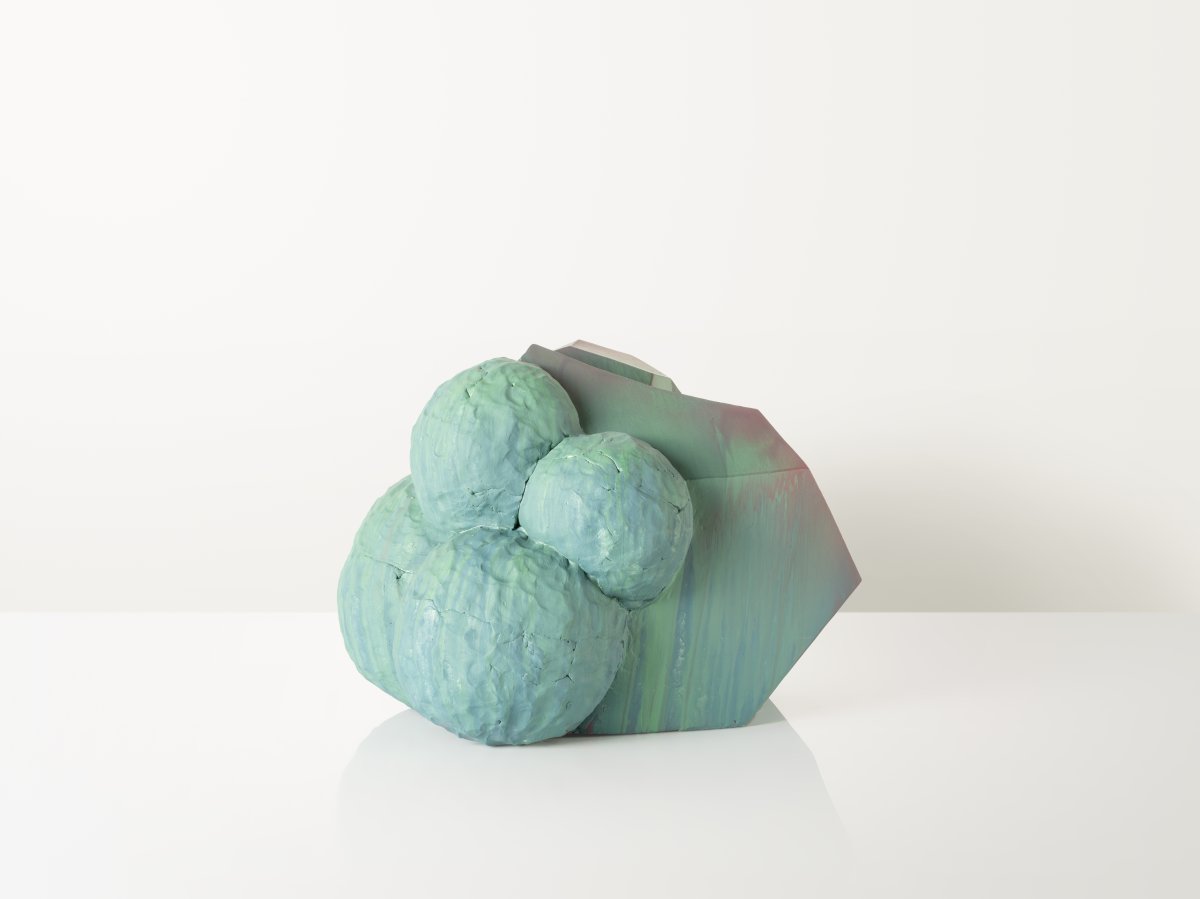 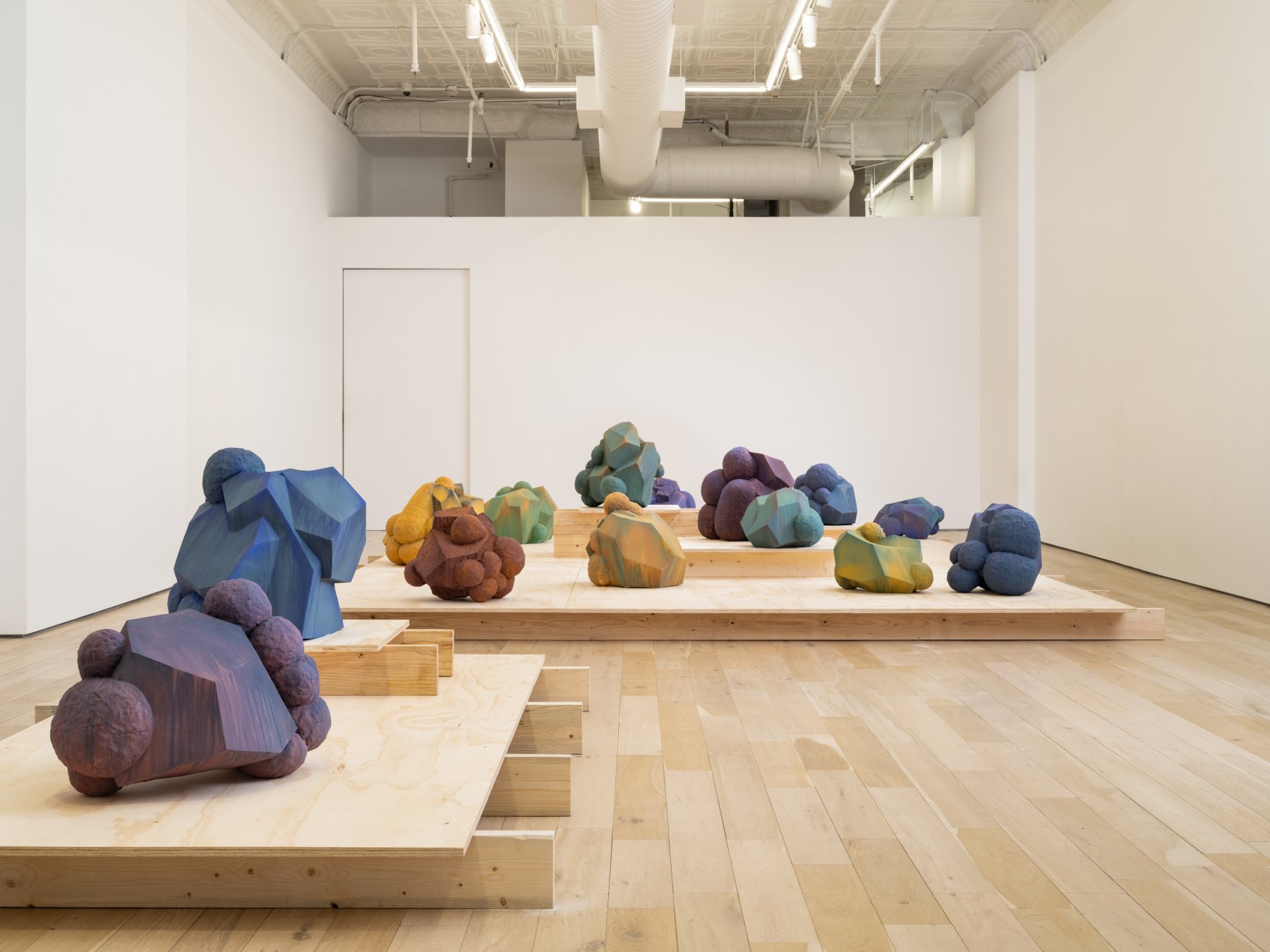 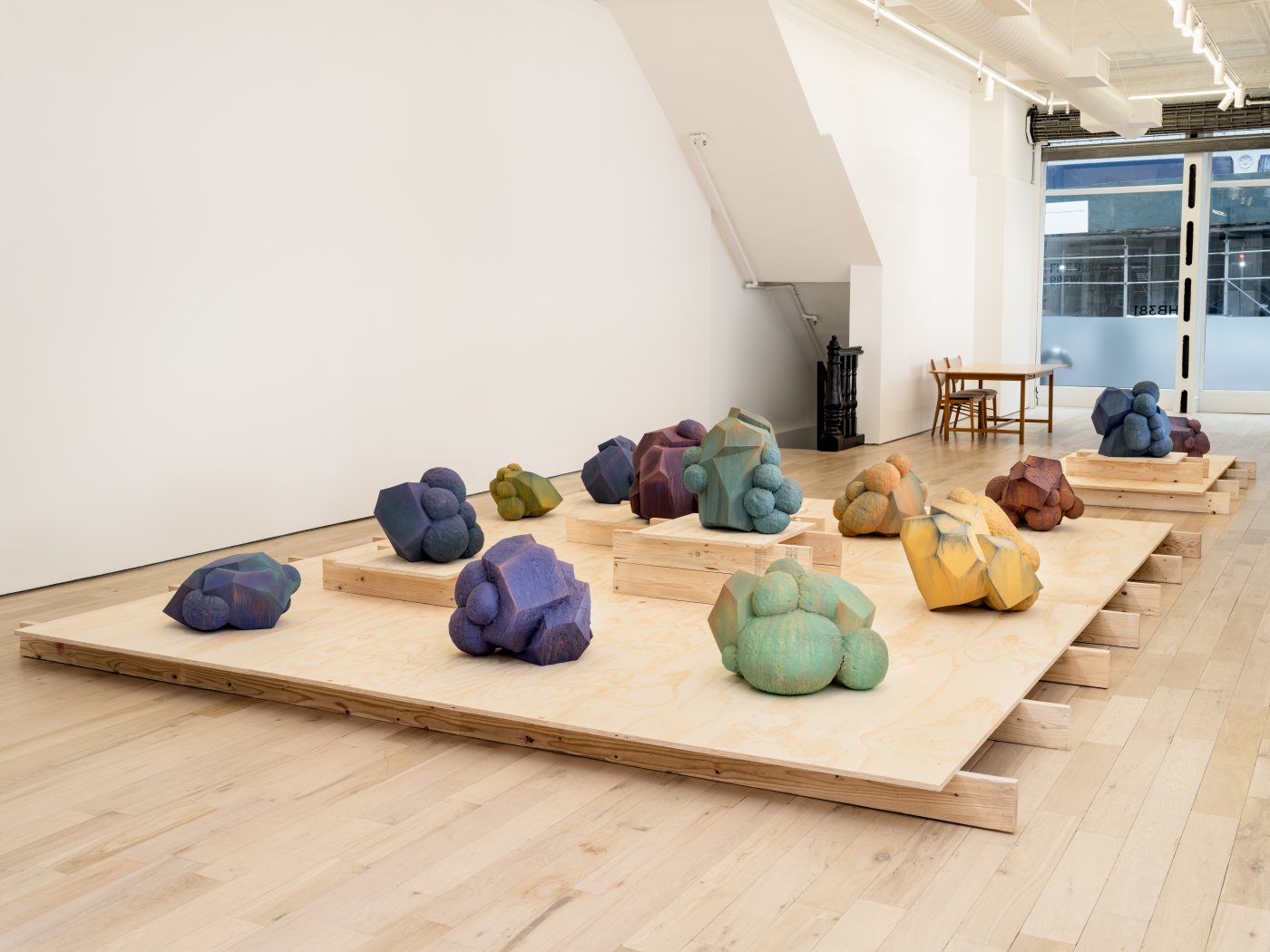 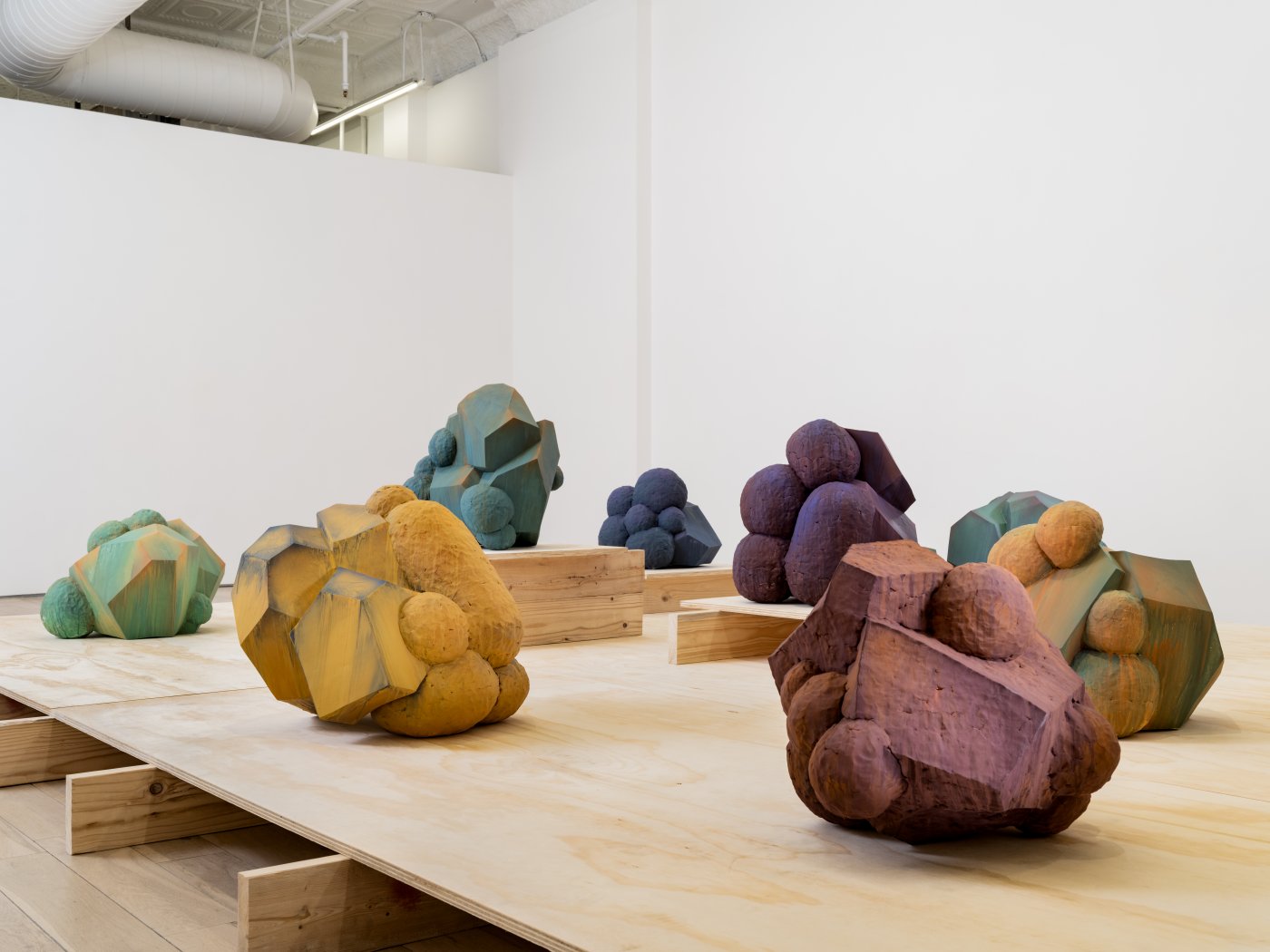 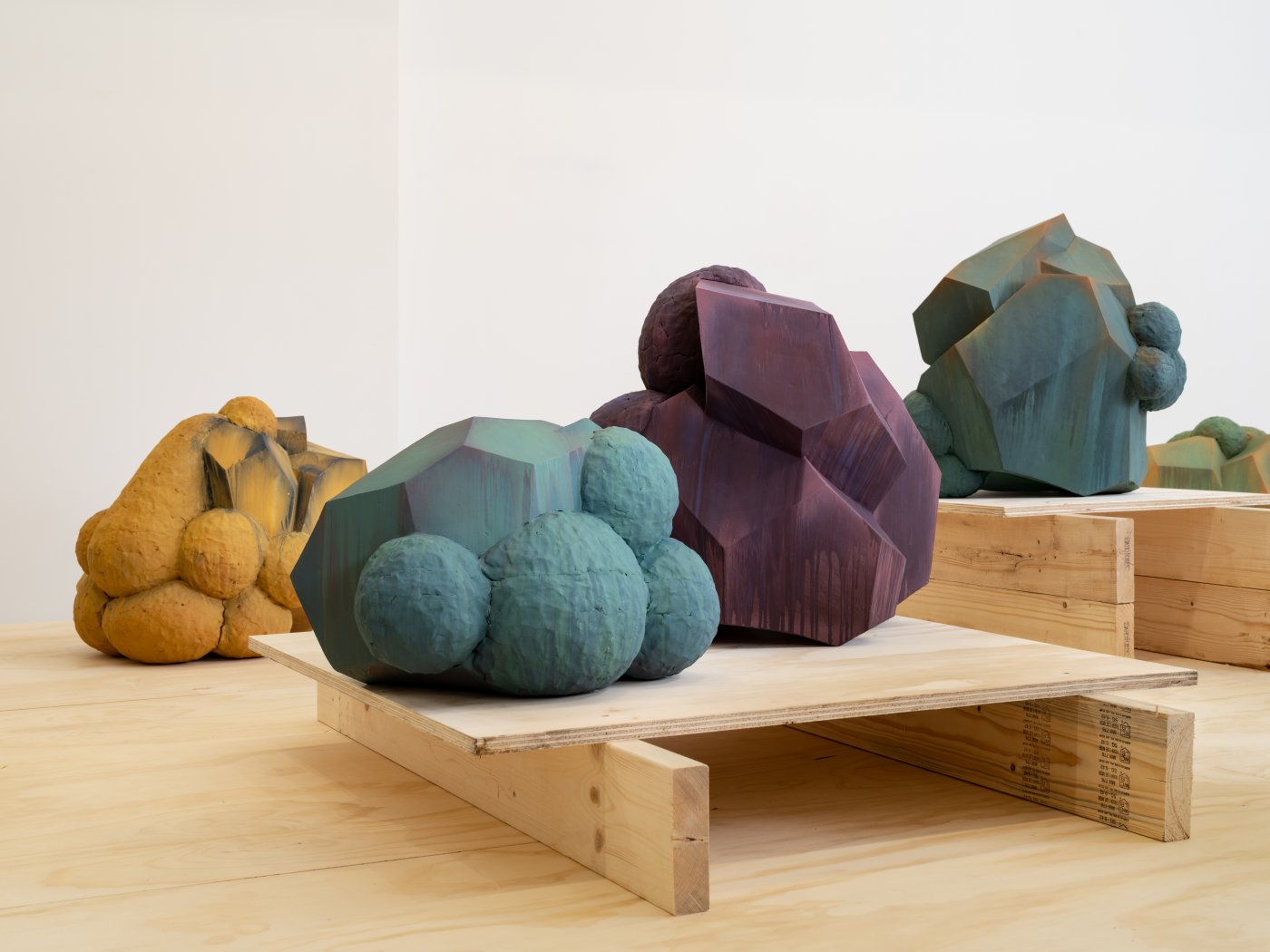 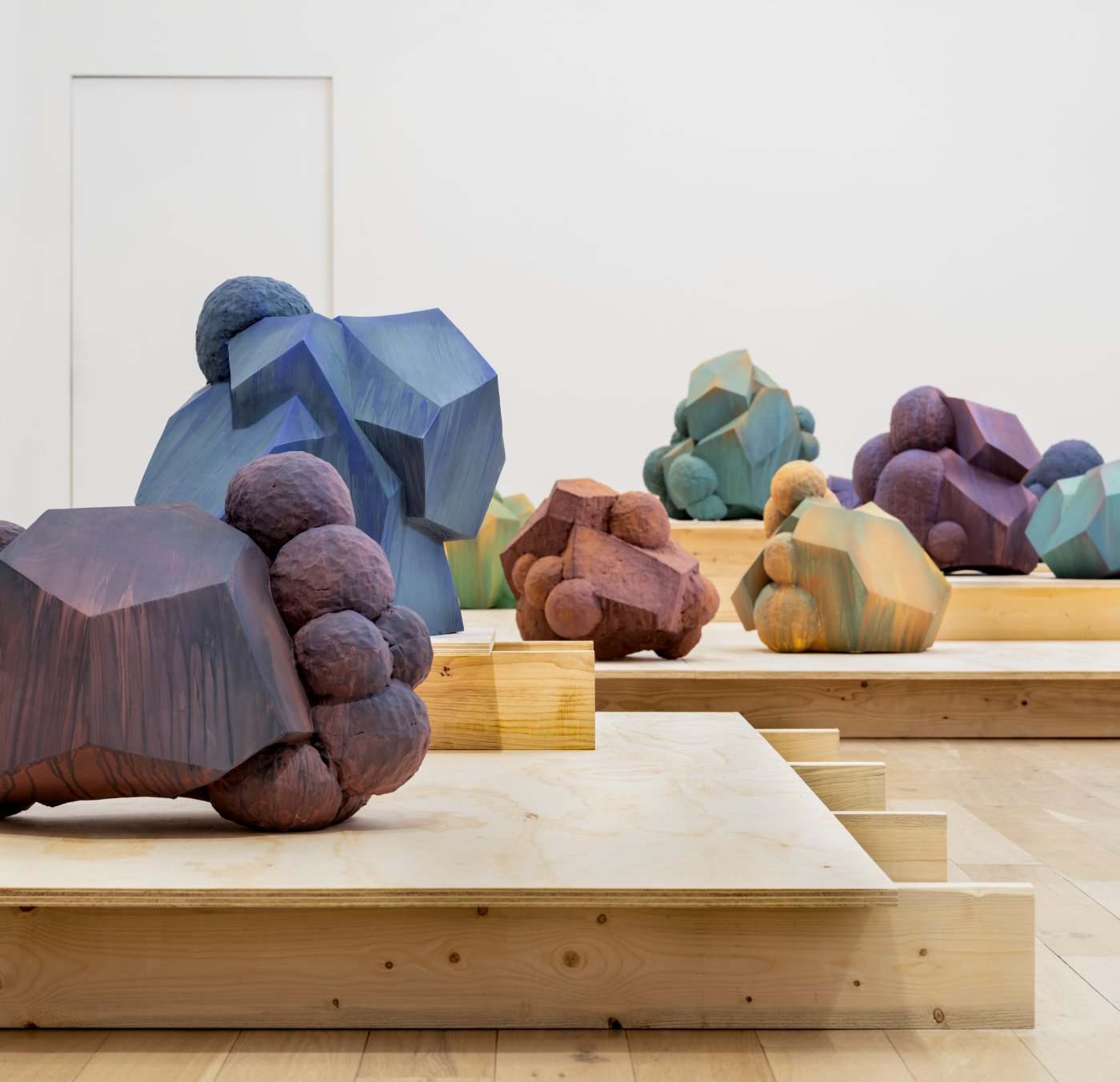 John Shea’s practice belongs with equal comfort to pottery, painting, sculpture, and installation art and yet—a free radical—it belongs exclusively to no one camp. Instead, the work lives confidently in a world of in-betweens. The result feels nuanced, self-nurturing, and balanced. In a world suffering from extremes and tribalism, Shea’s formalism dwells happily in the middle.

Starting from a shaped, wooden base, the artist hand builds his forms by pinching together small balls of clay. Some surfaces are then burnished smooth as flat planes and others left lumpy and rounded, but neither is too perfectly so. These ceramic sculptures are both muscularly abstract and evoke their own delicate elements, such as silica crystals, viewed through an electron microscope. They are both parts and the sum of their parts.

With off-kilter shades that include raspberry, yellow-orange, dusty green, and bluish-purple, the artist’s color palette comes from A Dictionary of Color Combinations by Japanese painter Sanzo Wada, a book that first appeared in 1932. Here, too, Shea shows his consensus building nature—he avoids pure primary colors, and instead mixes colors to create secondaries and tertiaries. These muted colors play well with each other, becoming an interdependent, mutual admiration society of color that fills a room. The palette’s in-between-ness is calming—nothing shouts or demands attention. Yet these colors pique the brain’s pleasure center.

Shea layers one color on top of another with spray gun and drip techniques. One color peeks through another’s veil at times, creating yet another shade. The technique is similar to glazing in painting, where layers of translucent oils shine through each other from murky depths. And note, Shea’s colored surfaces are oil-based enamels rather than ceramic glazes. This is where his work tips into the realm of painting quite comfortably. In fact, walking around his sculptures feels like experiencing painting in a new way—as a horizontally splayed-out installation of bobbing color, rather than a dense, vertical painted surface.

In a recent exhibition, Shea created a clearly demarcated, rectangular island of sculpture. His landscape of pedestals of different heights was built from Oriented Strand Board, or OSB. Similar to particle board, this woody material has a variegated surface. Again, Shea avoided purities like flat white pedestals, and the light-colored wood spoke the right dialect of in-between-ness as the sculptures. The result of the two together was harmonious and calm.

The conversational nature of Shea’s works is due, in part, to such placement on a construction-worker’s Acropolis. And like a group of students learning through the Socratic method, his colorful sculptures stand in dialogue with each other, each interrogating the nature of objectness. Or rather, thingness. Because Shea is interested in Bill Brown’s concept of “Thing Theory.” Put into too brief words, an object has a known purpose and fulfills it, but once it breaks down in some way and its usefulness is compromised, it becomes a thing. Are Shea’s forms objects or things? Has he broken down neat categories of painting, sculpture, and ceramics in way that turn his works into things? What was the original purpose to be broken down and who was the end user?

This work’s satisfying complexity comes from layers of interrelationships. Not only do these sculptures’ tiny parts speak to their whole outward selves, but their colors blend into mixtures of togetherness, and the sculptures play among each other with delight. They are a geography around which viewers move, and as they do, visual relationships playfully shift and change. Shea’s colors and forms need one another and yet, made in a studio by the same hands, his ceramic sculptures are independent beings who will carry the knowledge of each other into the world.