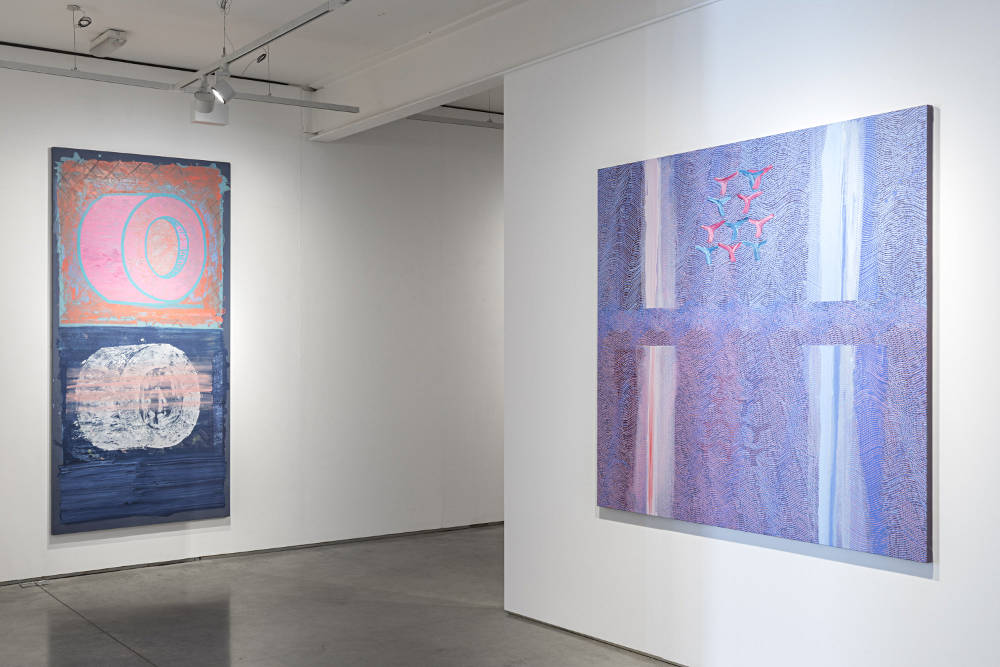 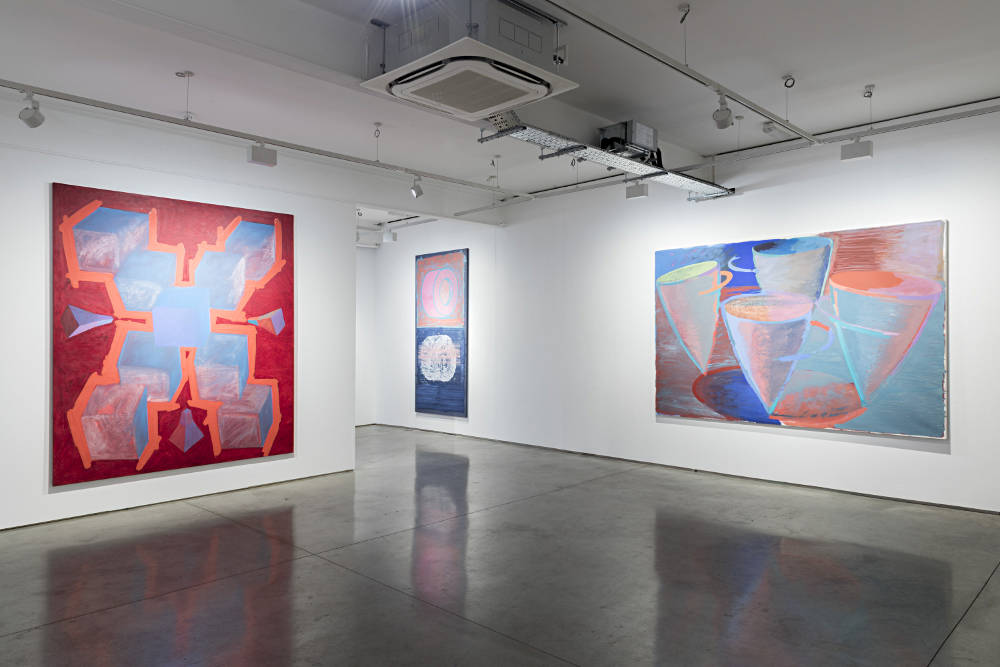 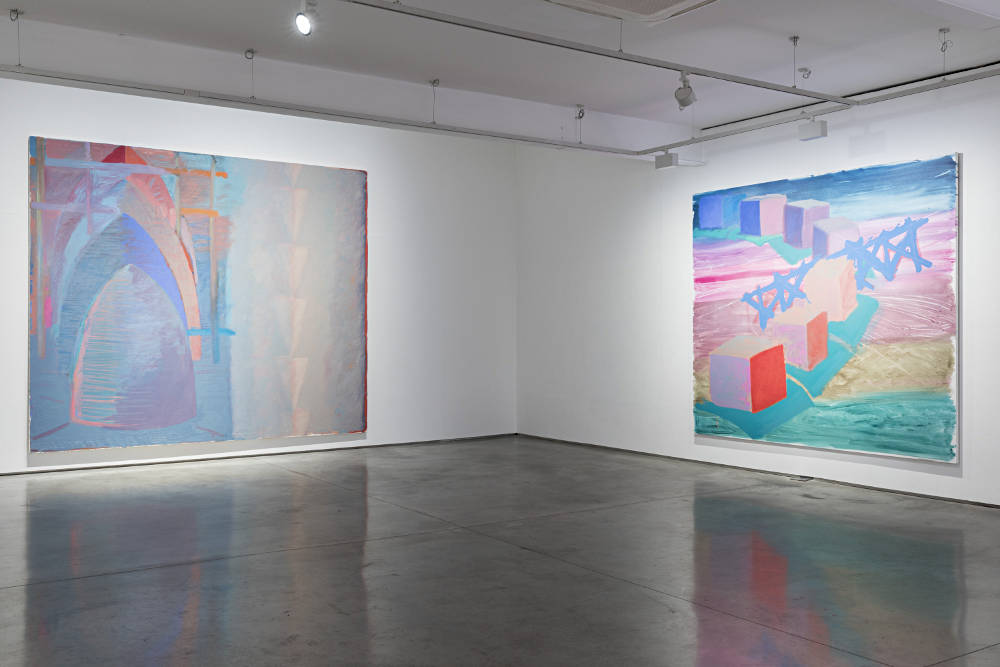 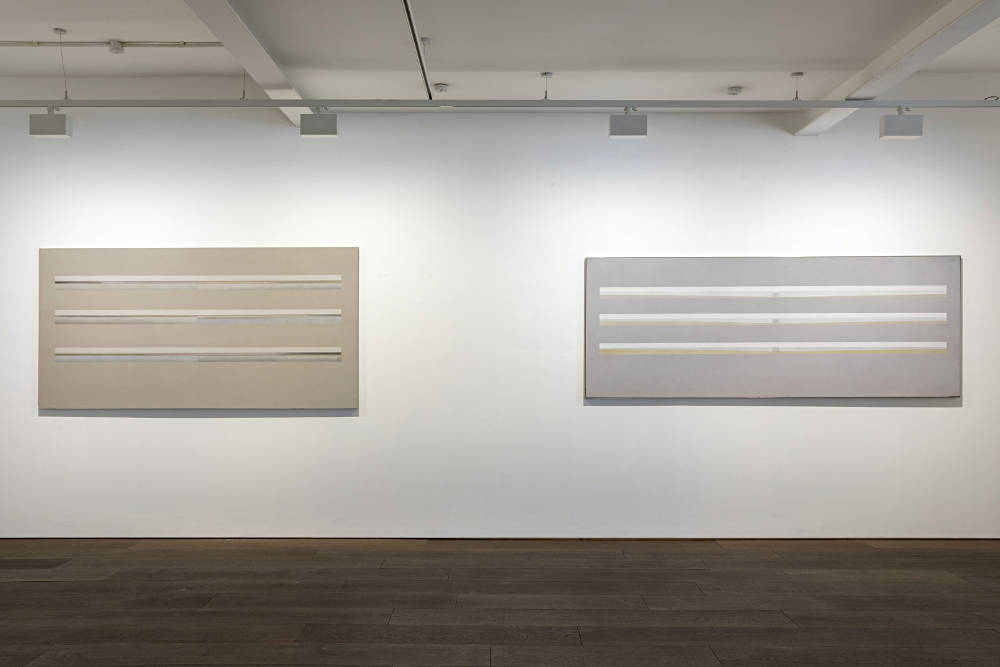 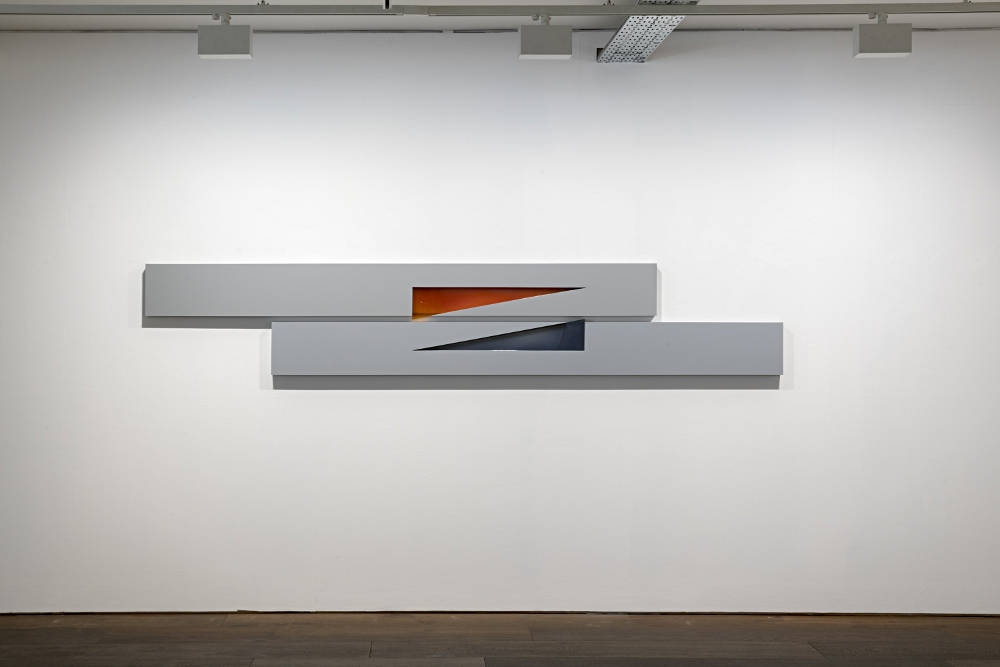 The show coincides with a survey exhibition taking place at Cartwright Hall Art Gallery, Bradford, and a new monograph written by Ben Lewis, published by Elephant.

Described by Ben Lewis as “one of modern Britain’s most original, free-thinking and category-defying artists”, Loker has produced works of art across many different media in the past six decades. The exhibition explores Loker’s stylistically-varied approach to image-making, from minimal painting and photography in the 1970s to expressive gestural paintings from the 1990s to the present day, sculptural constructions, and works on paper from across his career.

The exhibition begins with an example of Loker’s early semi-abstract paintings from the 1960s, fusing elements of Pop Art and the crisp shapes of hard-edge abstraction. Loker’s initial explorations of colour, shape and form took a new direction with a series of collages, photographs, paintings, and fibreglass wall-mounted constructions entitled Horizons, (exhibited at the ICA in 1970), which centred around the perception of space, focusing on objects in the distance as though seen on the horizon. Works on view include the wall-mounted fibreglass and resin Two Section Horizontal (1969); and the painting Six Horizons I (1972), which demonstrates Loker’s minimal approach to colour and shape during this period. Loker’s photographic works of this time are represented by an example from the Greenside series, a panoramic horizon comprised of multiple photographic images, representing an active engagement with both distance and time in their method of construction.

The exhibition continues to follow Loker’s journey through the landscape in works from series’ including Extracts, Ways and Zones, in which the landscape became segmented and reduced into pictograms or formal motifs. The gridded Extract paintings have been likened to film stills, continuing his investigation into movement through the landscape, while later motifs would begin to form a personal language exploring psychological and political themes.

Through symbolic forms such as whirlpools, traps, helter skelters and cauldrons, Loker has conjured a destructive and perilous world. Screenprints including the Dangerous Games series, and paintings such as Group Therapy (1988-89) are based on the nose cone of a missile, referring also to the psychology of interpersonal relations. He has said: “the way they were spinning just looked to me like people, all bouncing off each other …trying to communicate but failing miserably. I was thinking about danger, playing with things you shouldn’t, the balance of everything being so fragile.”

The spinning top motif later developed into a series of paintings known as Cathedrals, in which Loker likens the shape of the nose cone to the gothic arch in a church. In the Safety Zone paintings the cone is divided in two, reminsiscent of a harlequin, a comic trickster character found in several other works of the period. Further divided canvases, for example Double Incidents (late 1980s), continue the theme of duality or oppositions, composed of hot and cool colours and positive and negative spaces.

Crossover/ Sensitive Parts (1991) is one of a series made in response to Loker’s journeys overseas, first to Eastern Europe, where he devised monumental geometric forms prompted by the concept of communication. Later travels to Australia resulted in new pictorial motifs such as spinifex grasses and red centres, derived from the experience of the open desert landscapes and natural weather phenomena, including the smeared arc of a windshield wiper (a ‘wipeout’), which relates to the first-hand experience of a ‘Dust Devil’ (desert whirlwind). The discovery of fallen space rocket stages in the Australian Outback contributed new forms to Loker’s Desert Debris paintings and led directly to his most recent works (produced since the 2000s), which have revolved around space, and the Earth’s horizon. Here, the enduring motif has been the disintegration of the Space Shuttle Columbia on re-entering Earth’s atmosphere.

Ben Lewis argues that metaphor in Loker’s paintings derives not only from their symbols and motifs, but from the methods and processes by which they are painted. The painting becomes, he says: “… a metaphor, an amorphous symbol of our efforts to exercise control over our chaotic lives.”

John Loker (b. 1938, Leeds) has lived and worked throughout his career in London and East Anglia. He studied Graphic Design at Bradford College of Art and Design from 1954-58; and went on to study Painting at the Royal College from 1960-63. With the exception of a brief period spent in Manchester in the mid 1960s, he continued to live and work in London until 2002. He has exhibited widely internationally, and was included in many survey exhibitions of British art of the 1970s. In 1980, a travelling retrospective was curated by Lewis Biggs at the Arnolfini in Bristol. Loker’s work is in the collections of the Arts Council of Great Britain; British Council; CODA Museum Collection in Apeldoorn, Holland; Hunterian Collection, Glasgow; Power Institute of Fine Art, Sydney; Royal College of Art; Tate; and the Victoria and Albert Museum. Loker is also represented in the corporate collections of Deutsche Bank, ABH Bank Amsterdam, De Beers and Unilever.