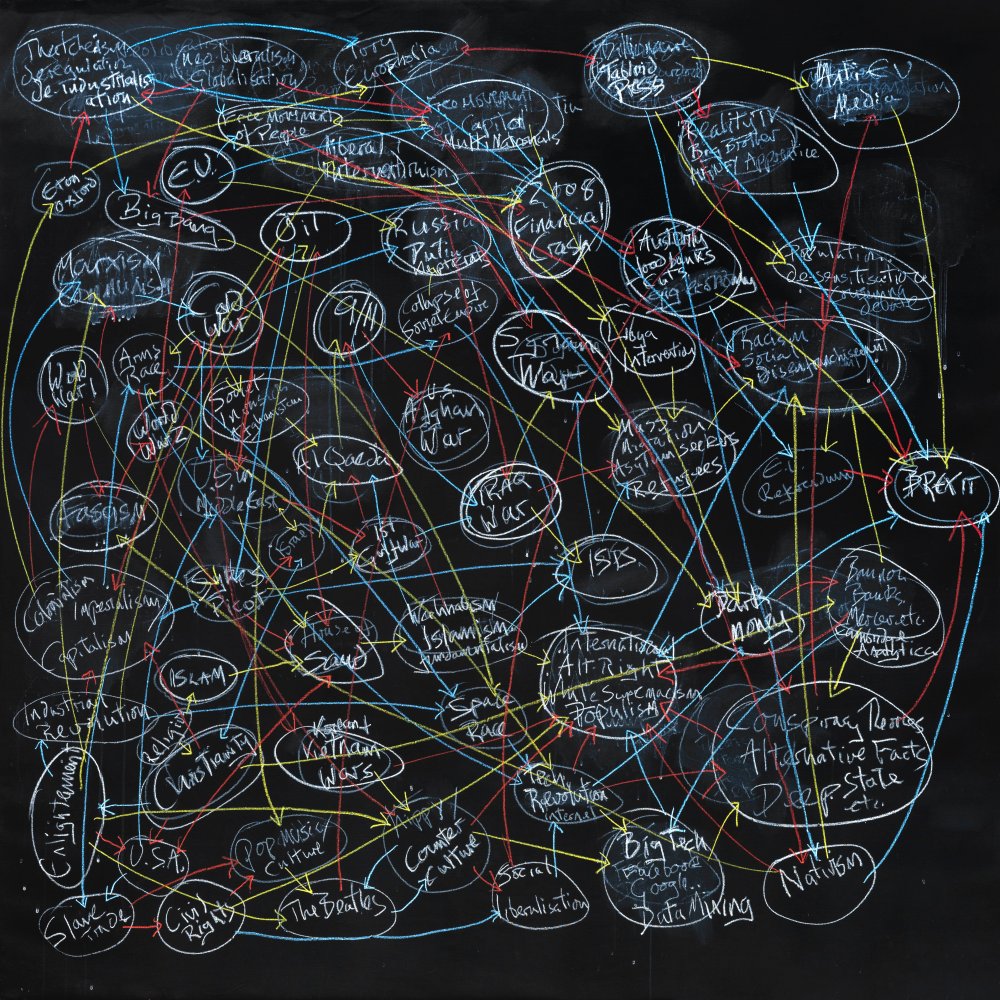 John Keane
Blackboard/Theory of Anything, 2020 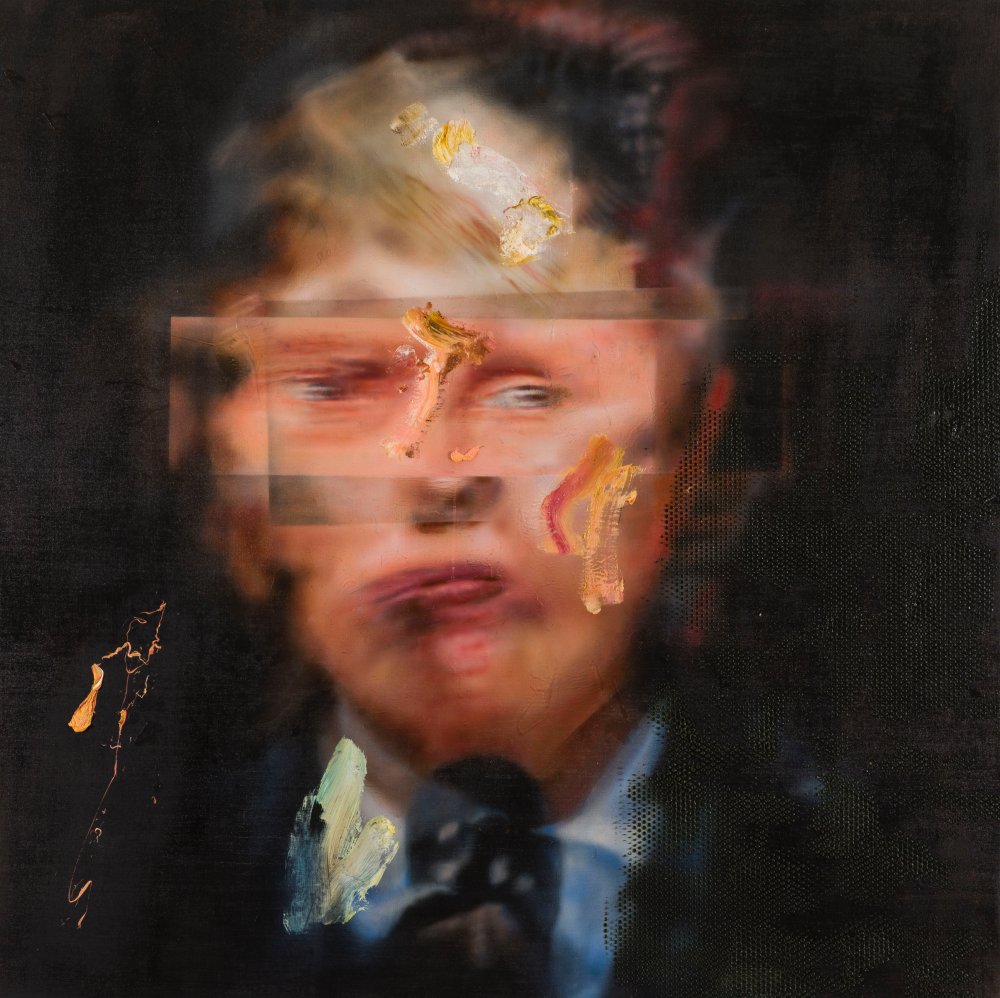 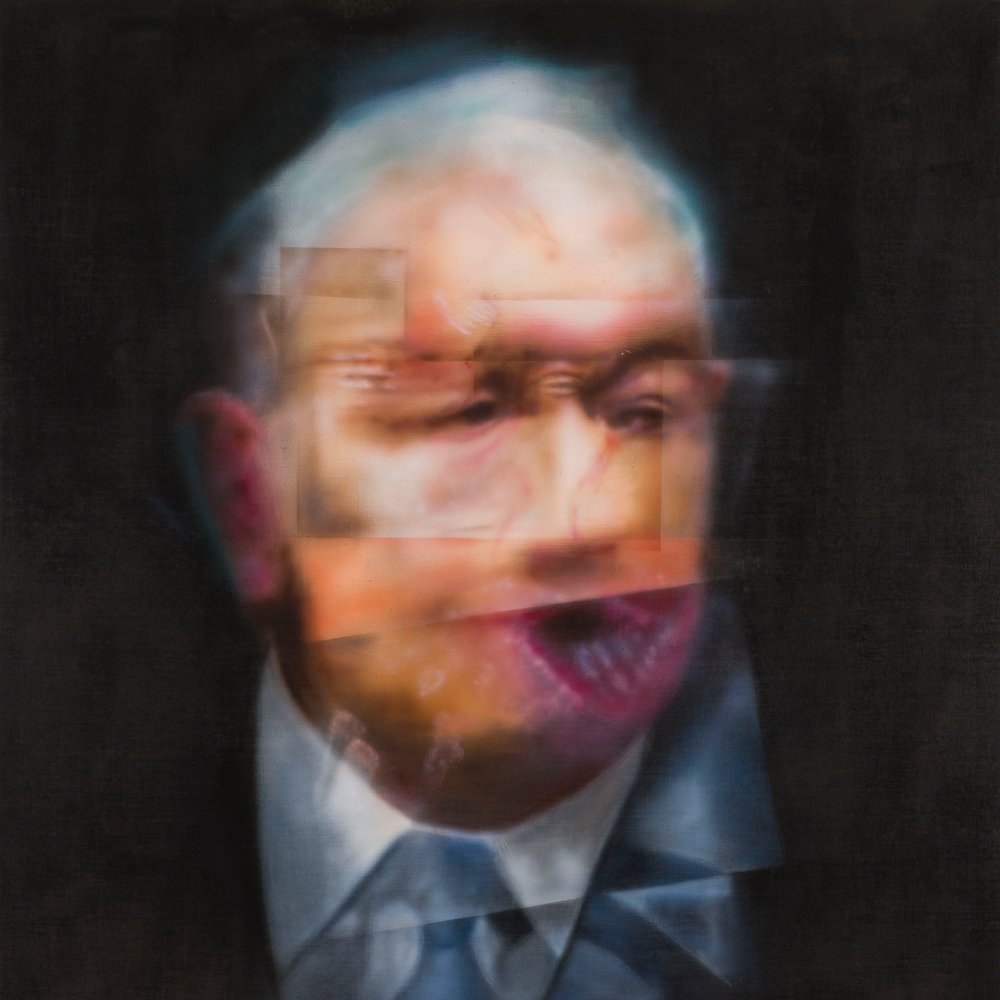 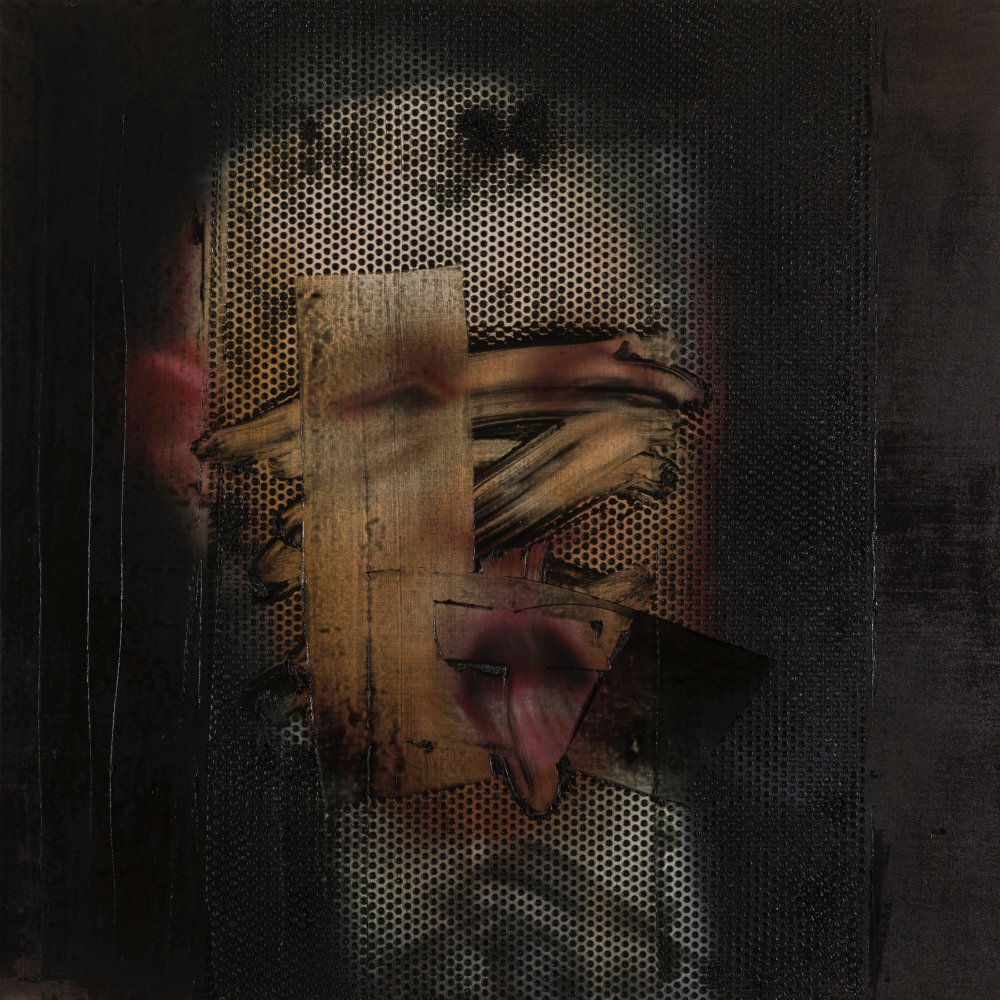 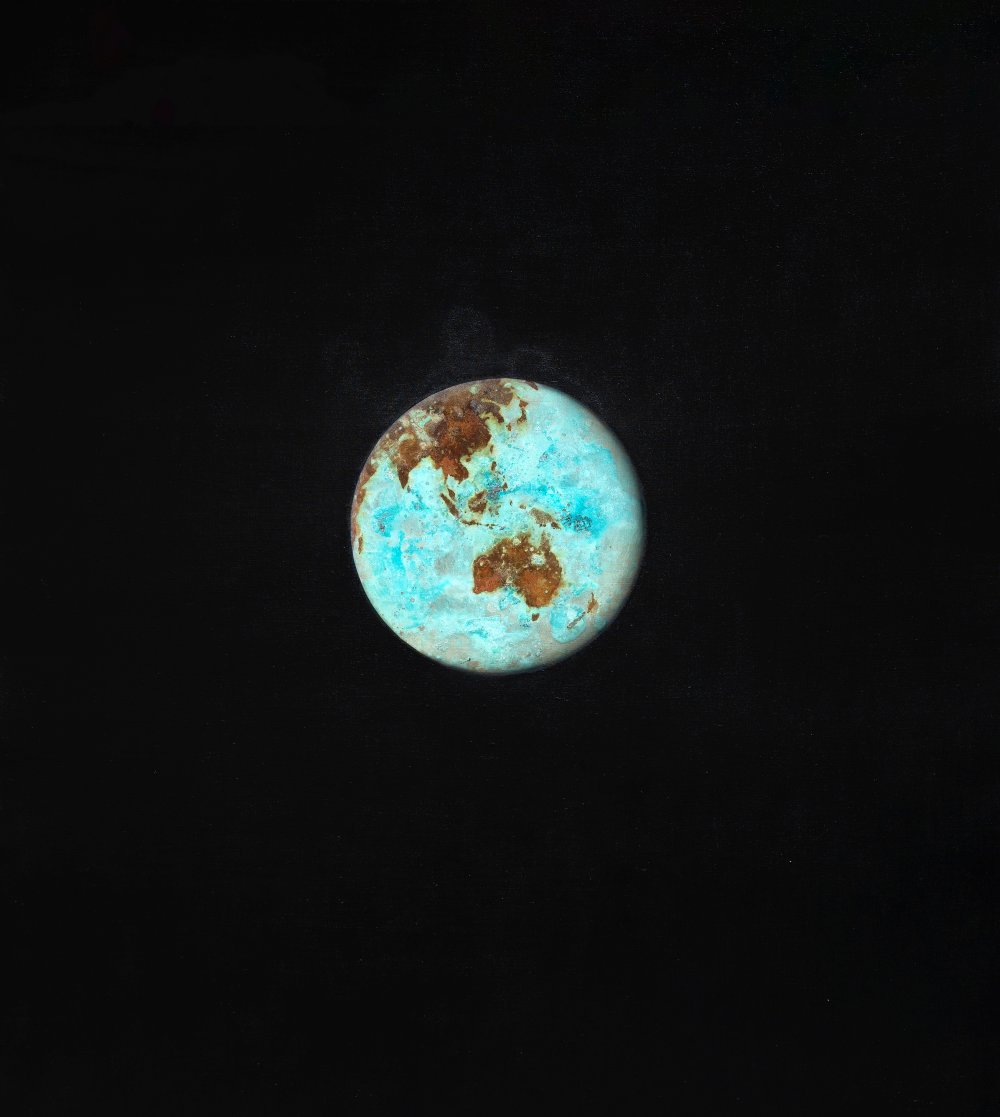 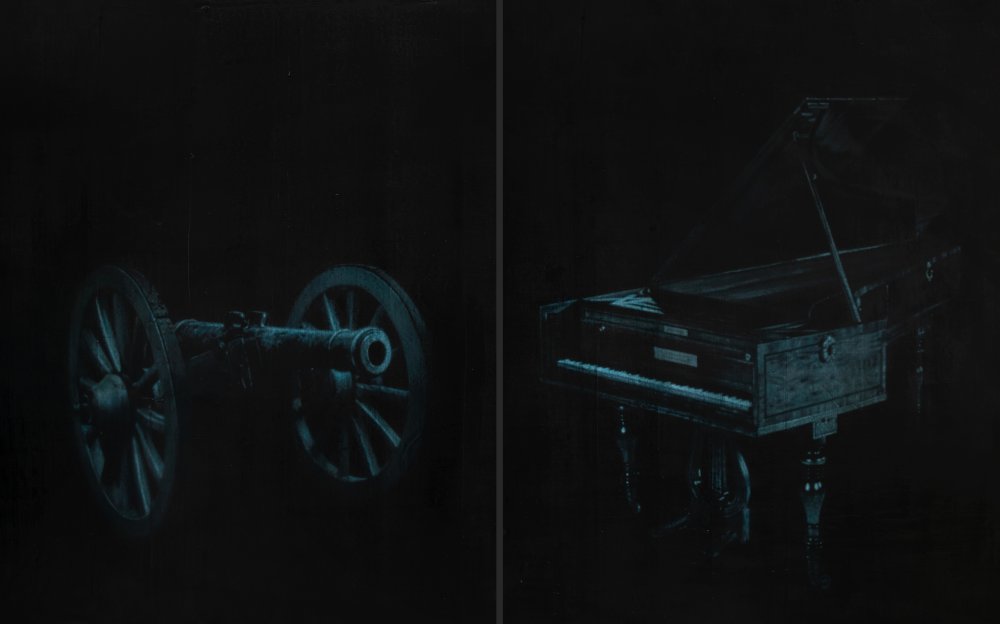 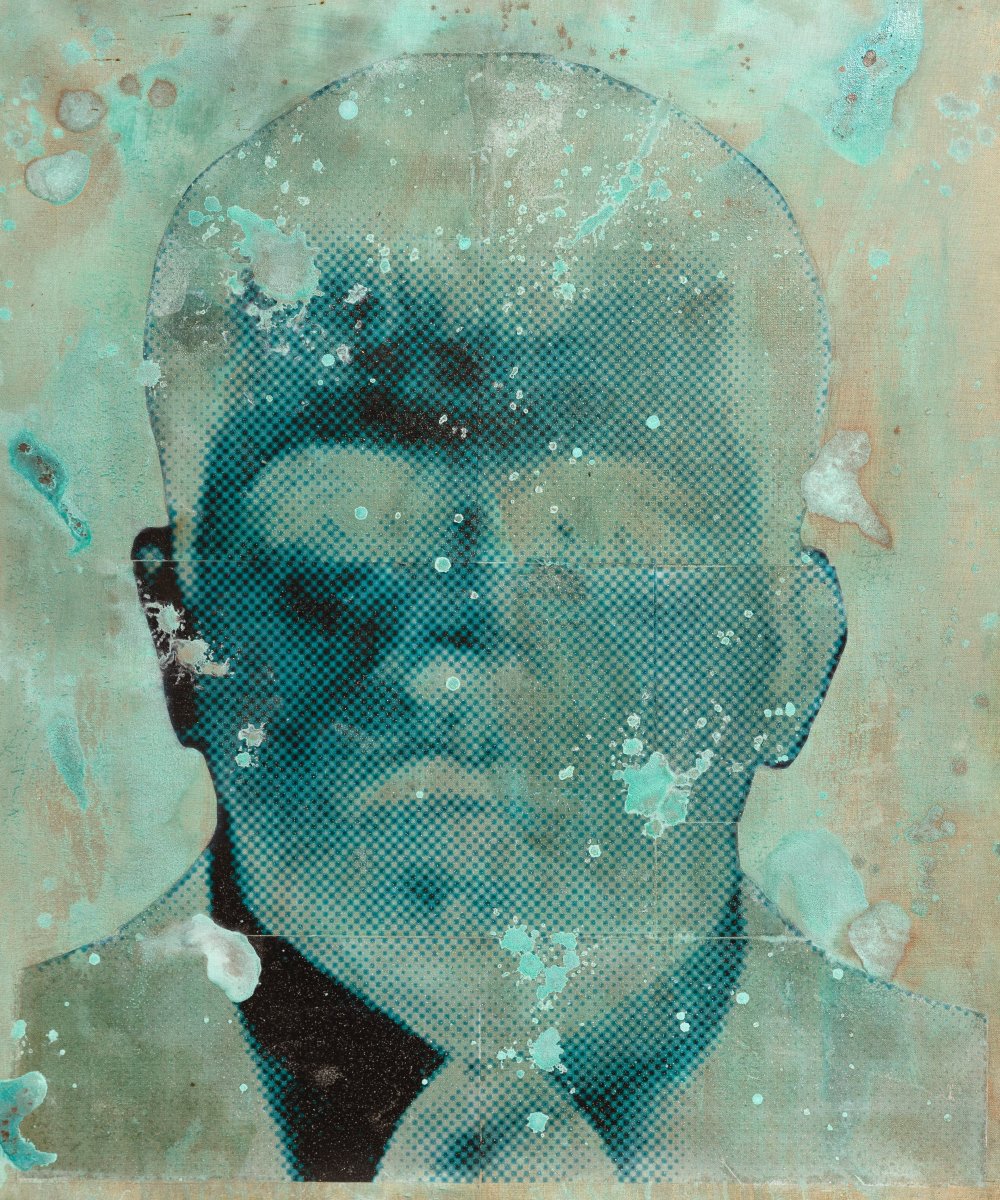 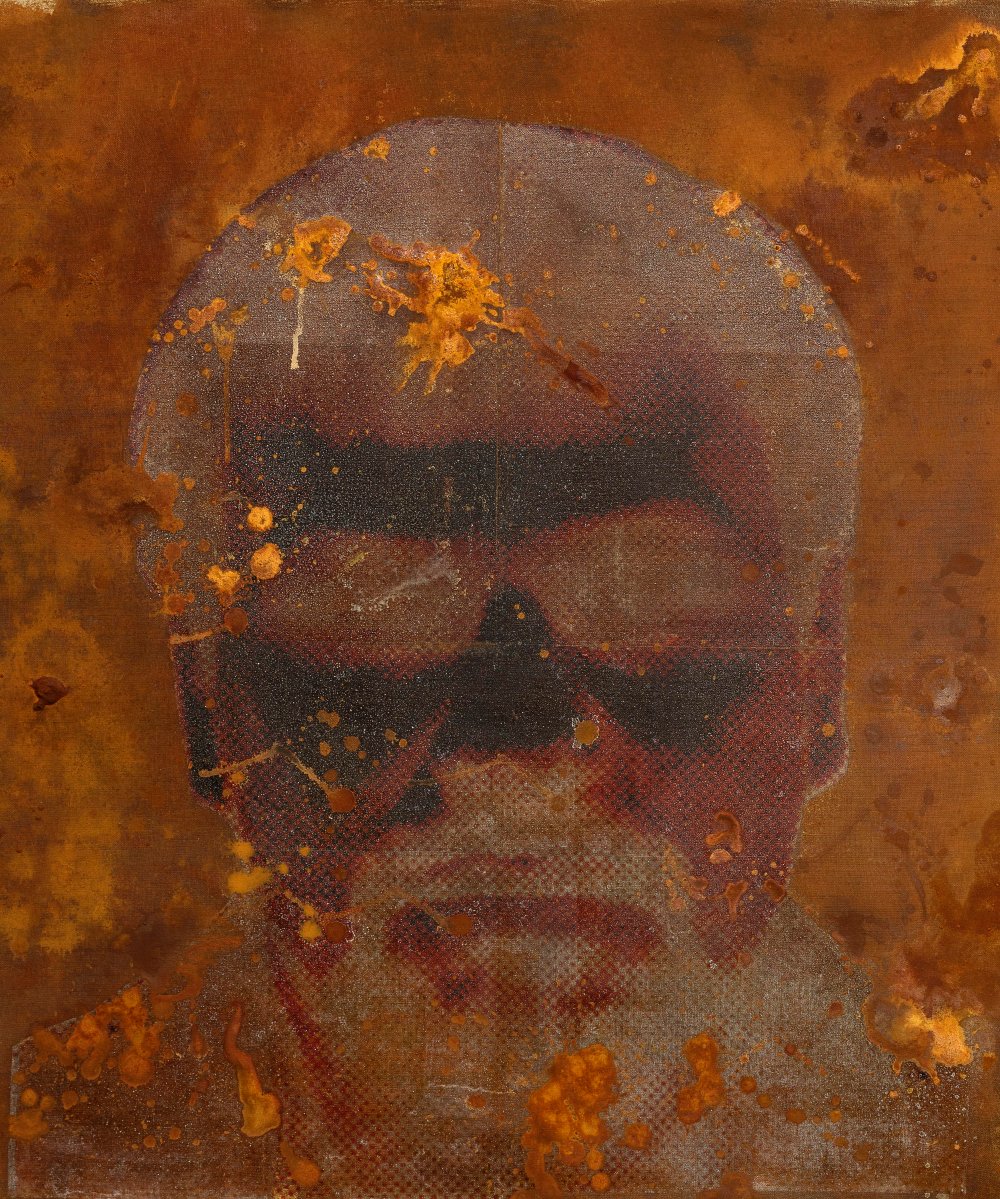 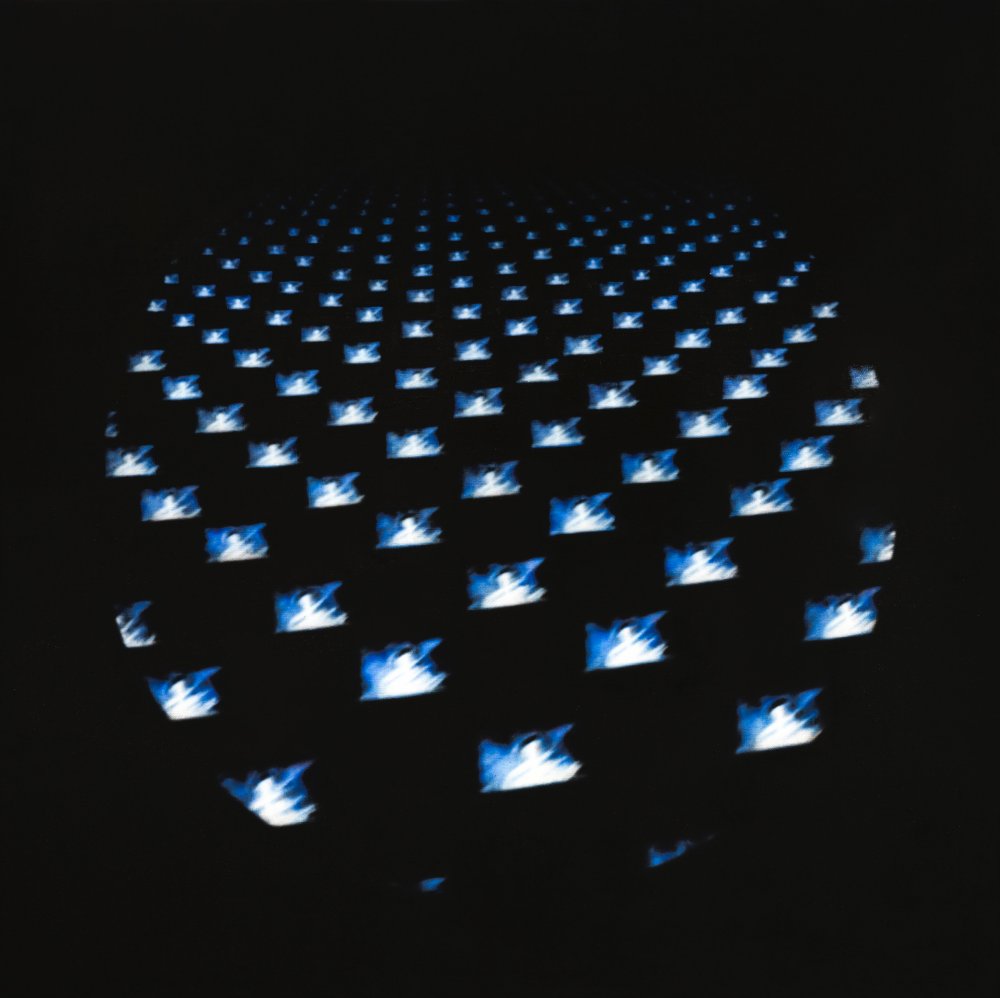 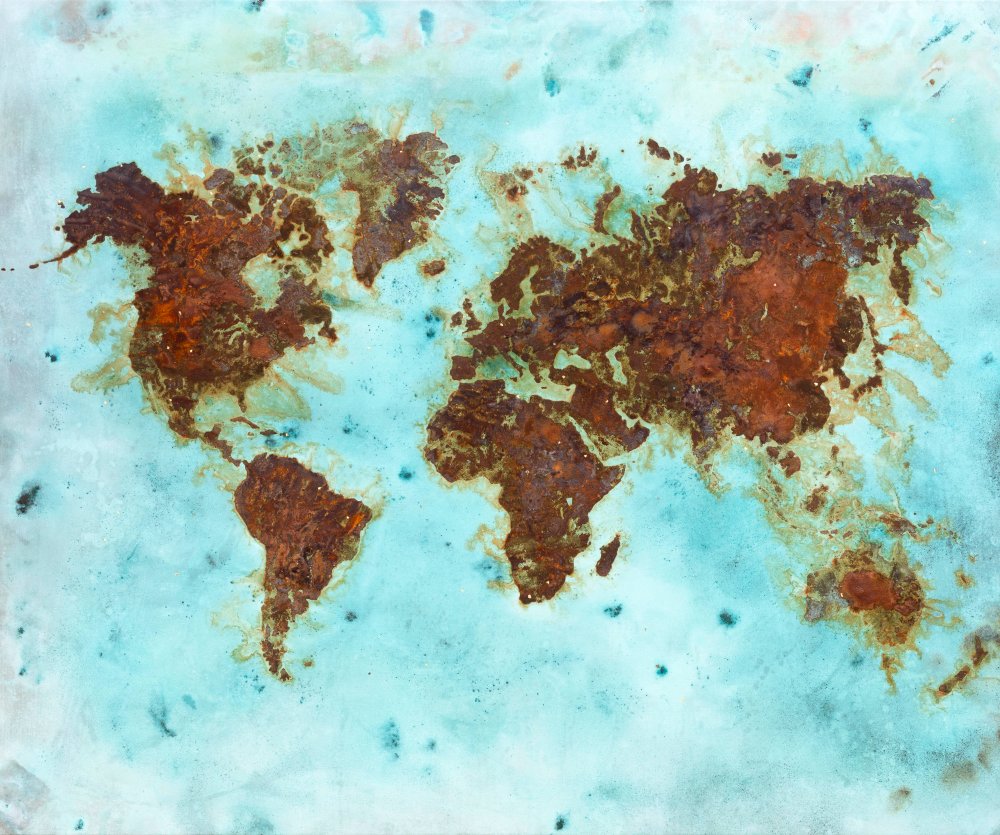 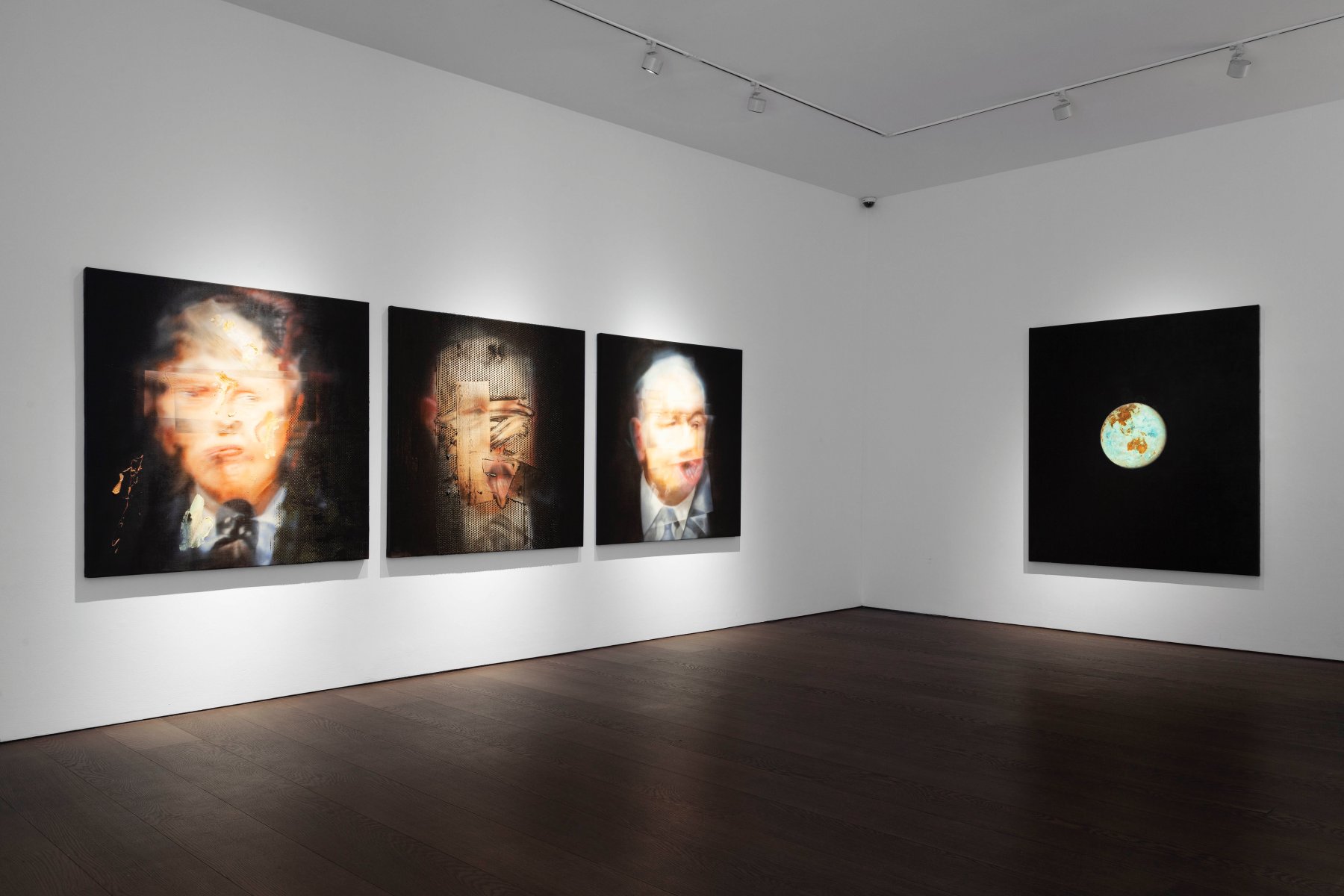 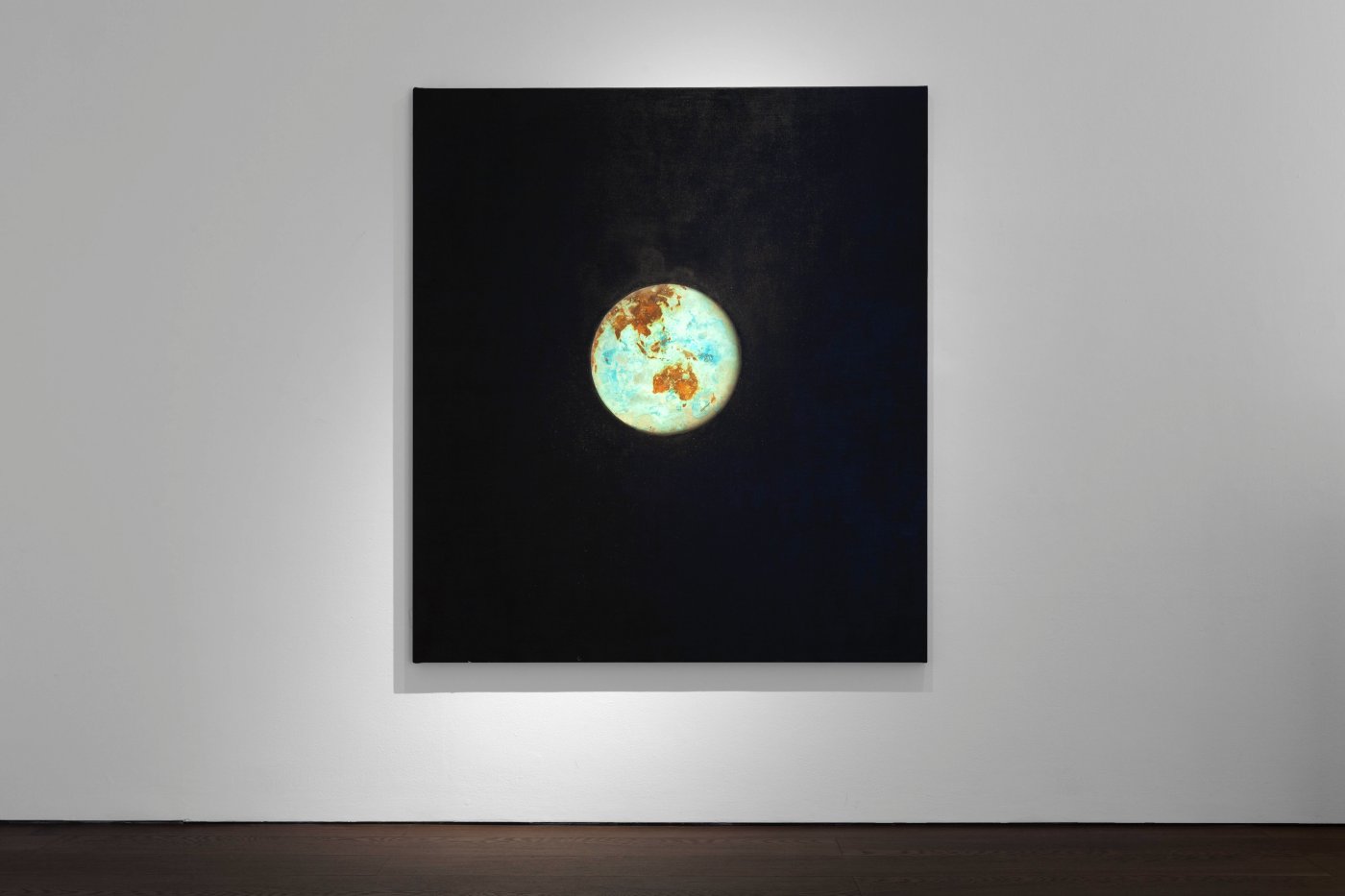 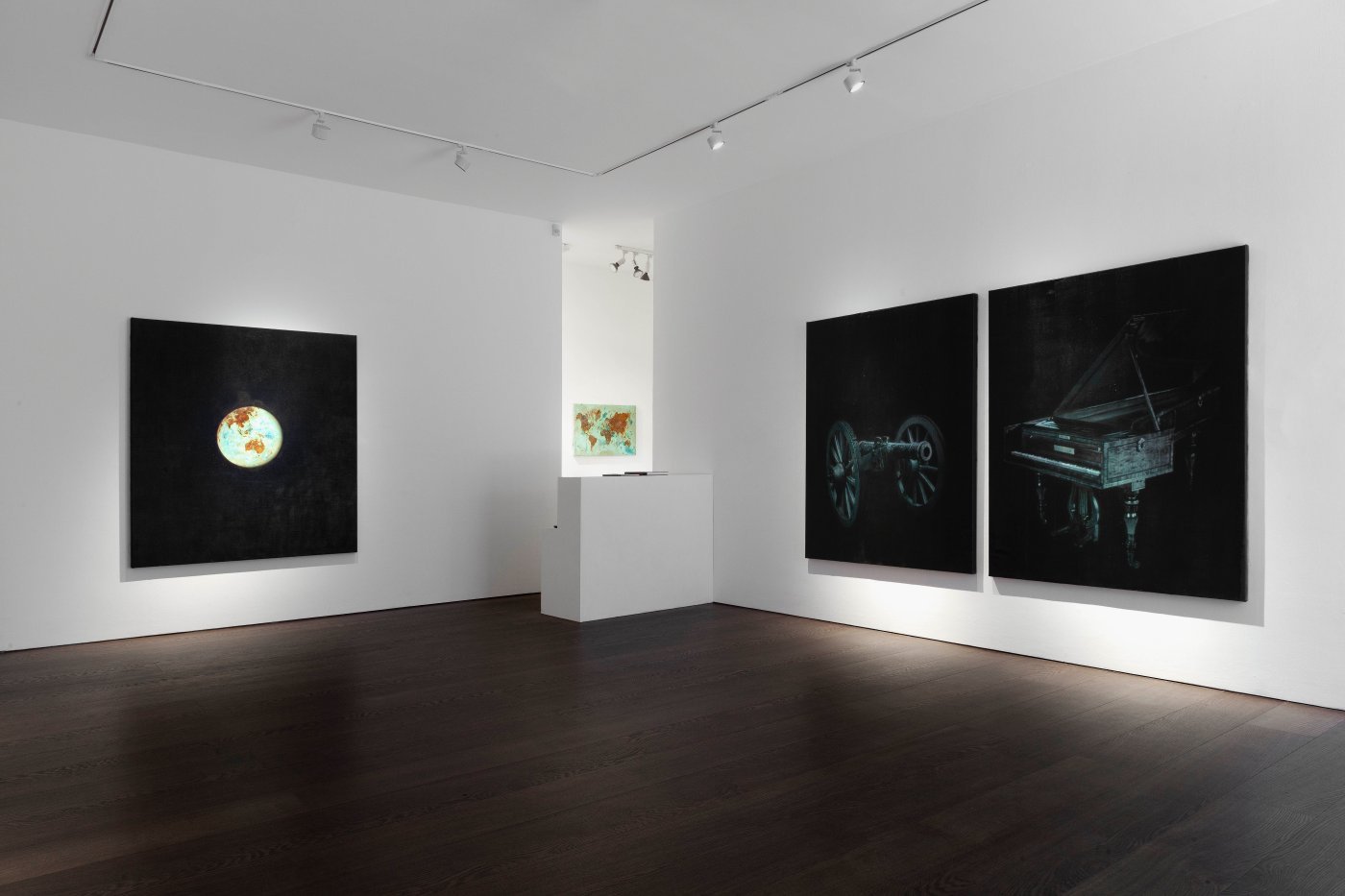 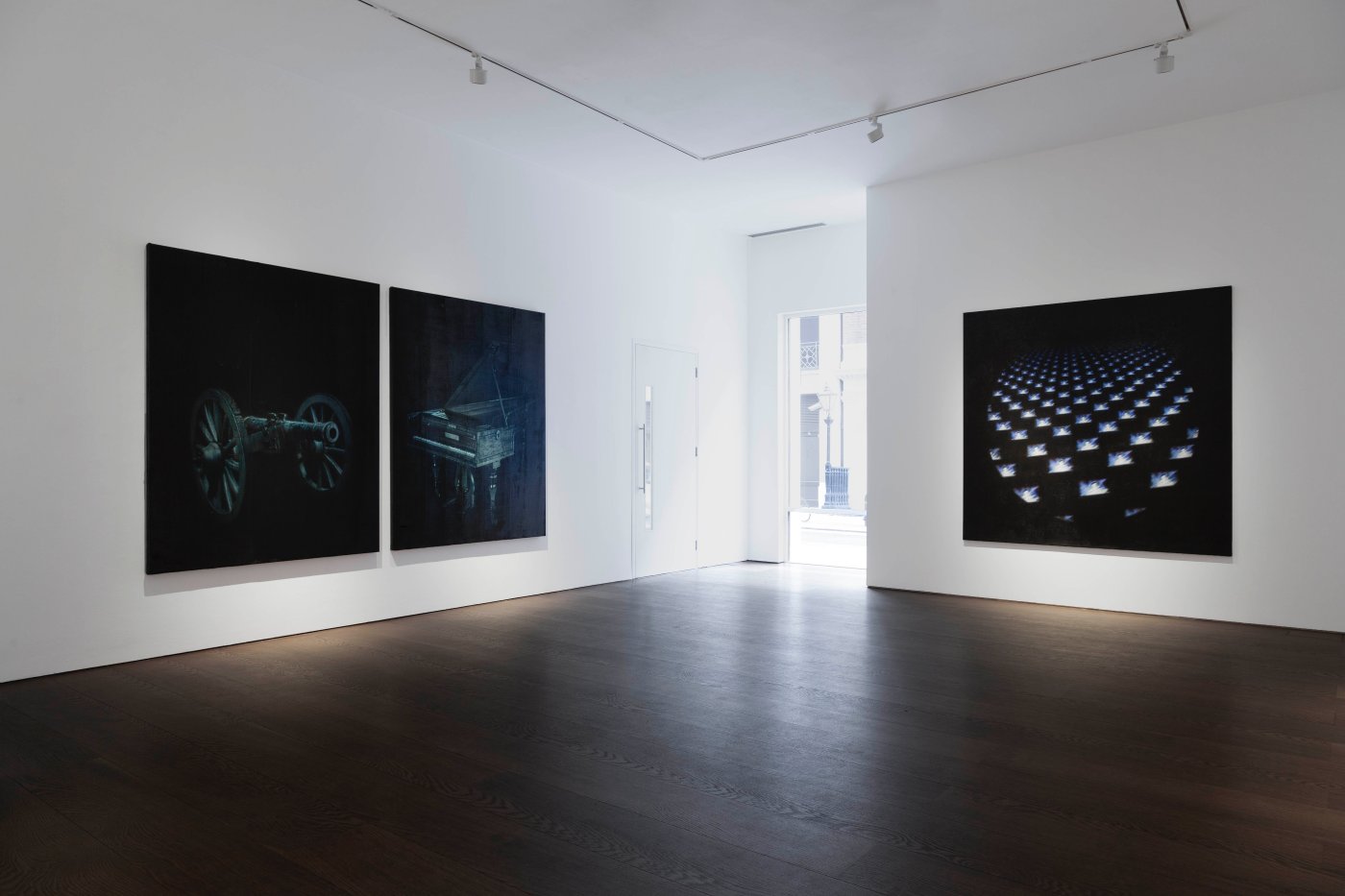 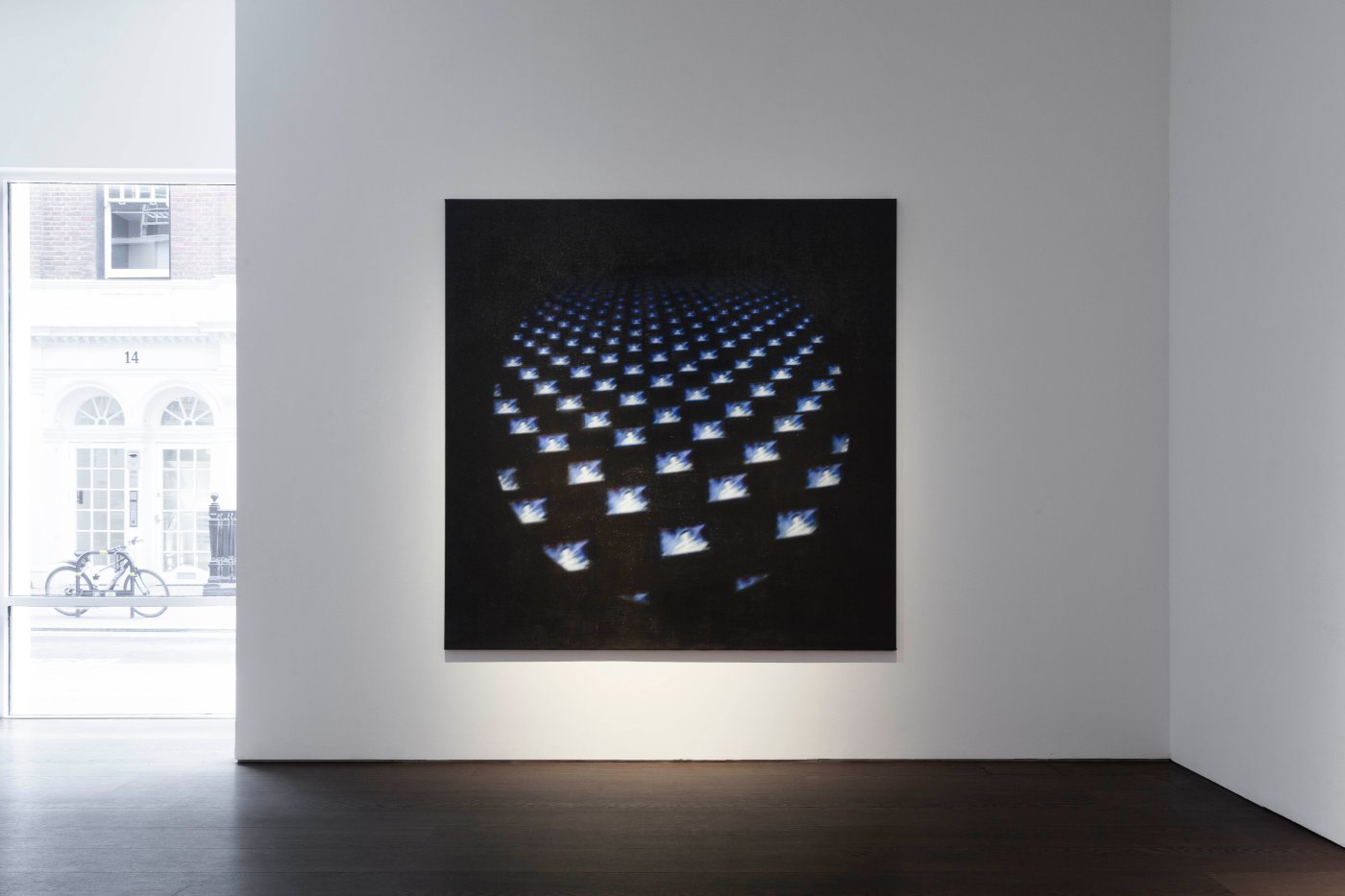 John Keane is a renowned artist whose work addresses the most pressing social and political issues of our time. His sustained artistic inquiry into military and social conflicts around the world has extended from Northern Ireland to Central America and the Middle East, where he was commissioned as the Official British War Artist of the Gulf War.

The collection of paintings in this exhibition have been created over the last two years amid seismic shifts in the domestic and global political landscape. From conspiracy theories to data mining, Keane’s subjects span the evolving and influential world of information technology and the resulting network of alternative facts, misinformation and cyber warfare.

Keane shifts from natural materials to digital resources in a selection of paintings considering data mining, and its impact on the present international political landscape. Blackboard / Theory of Anything, 2020 interweaves the complexities of global politics, modern history and religion, drawing connections between cause, effect and unintended consequences in an effort to establish why we are where we are today. This is presented alongside a series of Despocracy paintings, which conflate the images of a number of populist national leaders into a single canvas. Shown together, Keane highlights the links between the harvesting of personal data and the outcome of recent democratic processes across the globe.

Keane has used the metaphor of Flat Earth theory to explore perceived discrepancies between the modern age of evidence-based science and the spread of counter information and myths shared and popularised on the internet. Flat Earth Series #2, 2019 depicts the globe rendered in oil and a reactive metallic medium, creating a fluid exchange between illusory representation and the flat surface support. Keane’s use of metallic paint refers to the elements and minerals of the Earth’s crust from which the hardware of technology is fabricated, while the unpredictable process of oxidation in this medium also suggests global fragility.

Again using reactive metallic paint, the Новичок (Novichok) paintings use negative images of the suspects in the Salisbury novichok poisoning in 2018.The revelation of the suspects’ identities and resulting information war presented, according to Keane, “a clash of empiricism and denial according to political preference,” describing his paintings as metaphors for “seeing only what conveniently fits a belief system, and ignoring that which is inconvenient.”

John Keane (b.1954) studied at Camberwell School of art, and has exhibited widely across the world. His work is in public collections including Chase Manhattan Bank, New York; Christie’s Corporate Collection, London; Detroit Institute of Fine Art, Michigan; Glasgow Museums: Gallery of Modern Art, Glasgow; and Imperial War Museum, London. Keane has been commissioned to paint the portraits of notable individuals such as Mo Mowlam, Jon Snow and Kofi Annan. John Keane was invited to be the inaugural Artist in Residence at the School of International Relations, University of St. Andrews, Scotland in 2014, and was the winner of the Main Prize for the Aesthetica Art Prize in 2015. Most recently his work has been exhibited in the solo exhibitions Life During Wartime, at Summerhall, Edinburgh, in 2018; and If You Knew Me. If You Knew Yourself. You Would Not Kill Me (Snape Maltings) & At The Front, (Peter Pears & Garage Galleries) as part of the Aldeburgh Music Festival in 2019. His work was recently included in the group exhibitions Free the Pussy! Summerhall, Edinburgh in 2018 and Age of Terror:Art Since 9/11, Imperial War Museum, London, 2017-18. He was the subject of a book by Mark Lawson, Troubles My Sight: The Art of John Keane, published by Flowers Gallery in 2015.

Keane has exhibited with Flowers Gallery since 1985, with more than 25 solo exhibitions across the gallery’s UK and US locations. He lives and works in London.