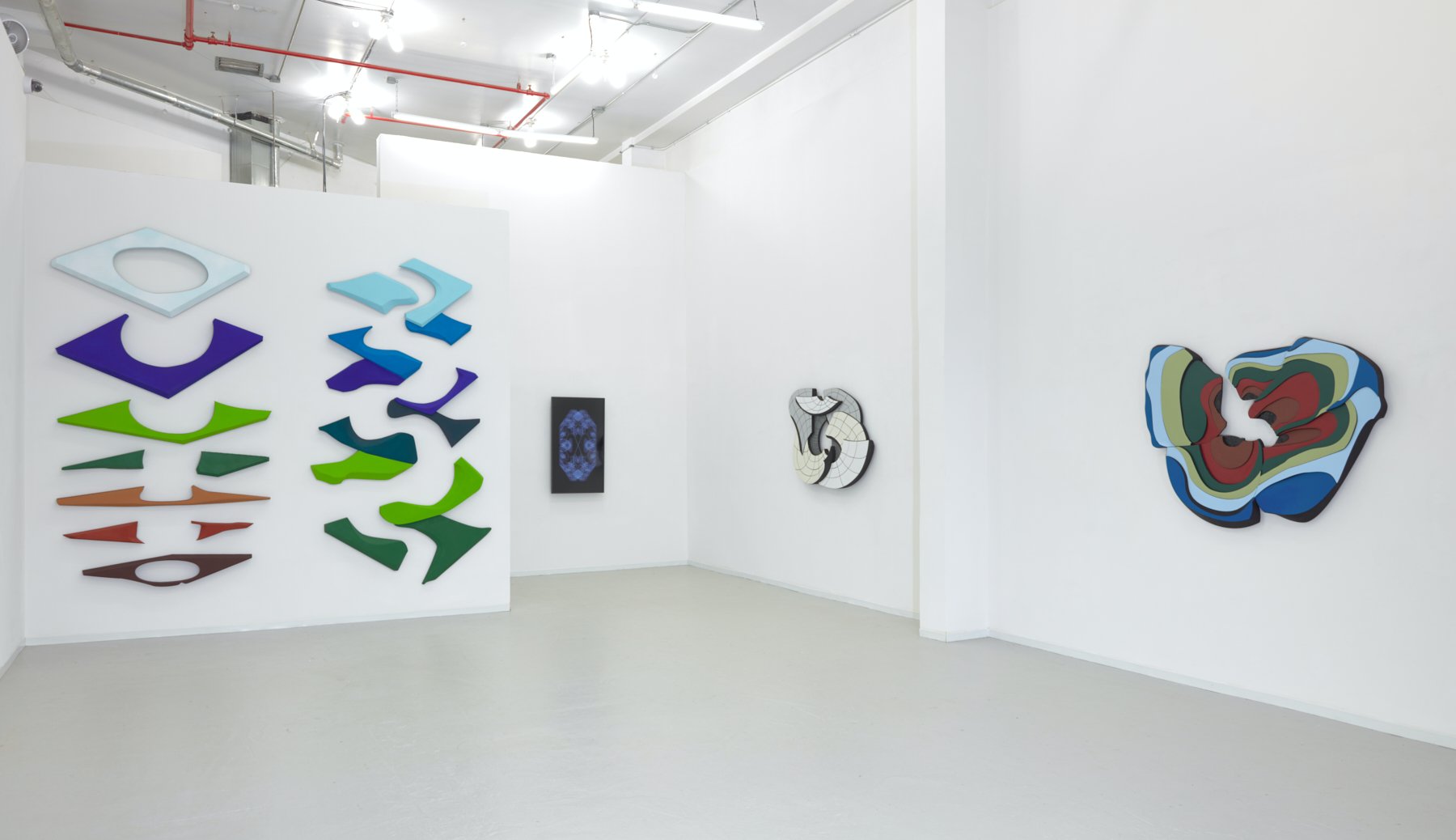 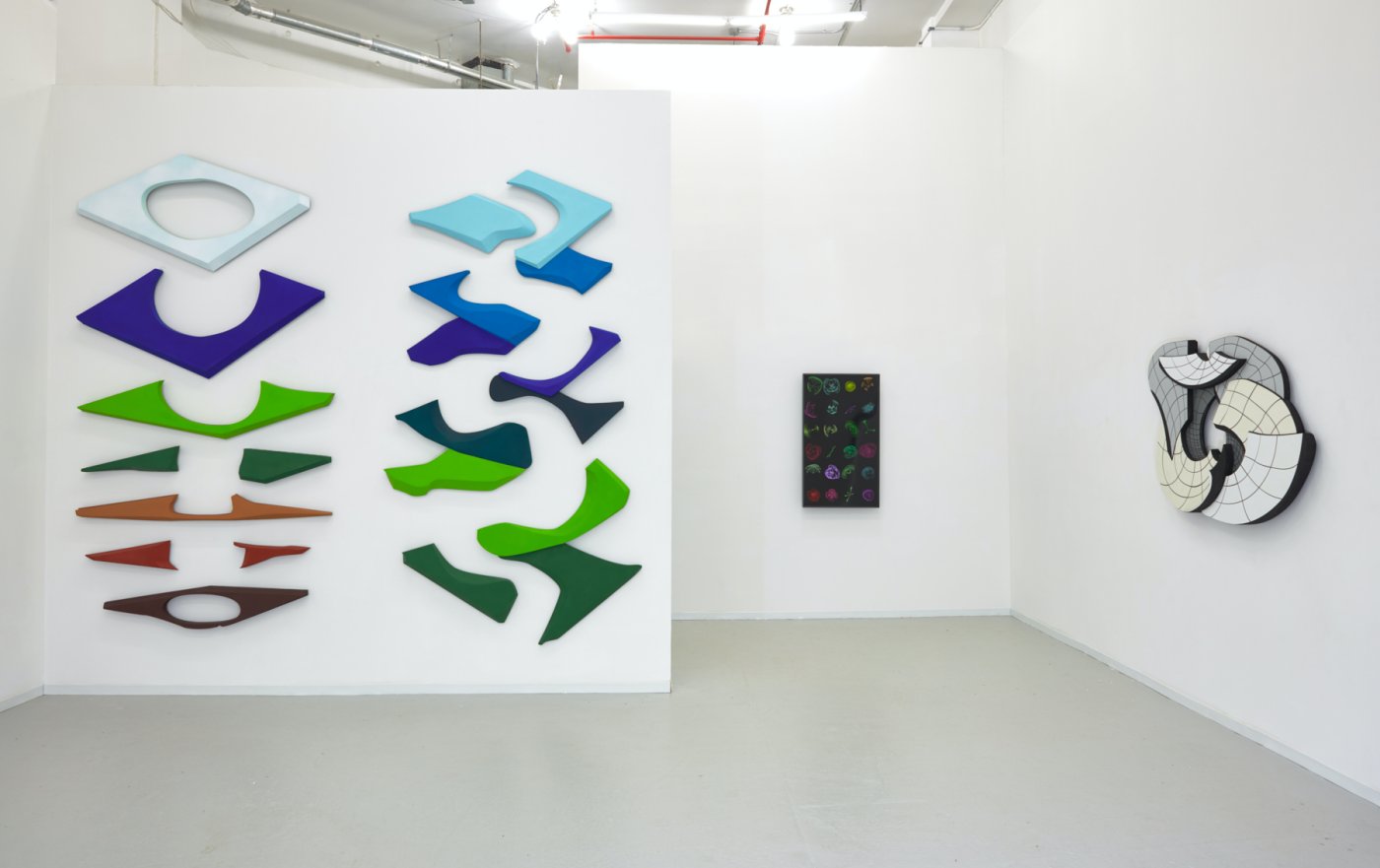 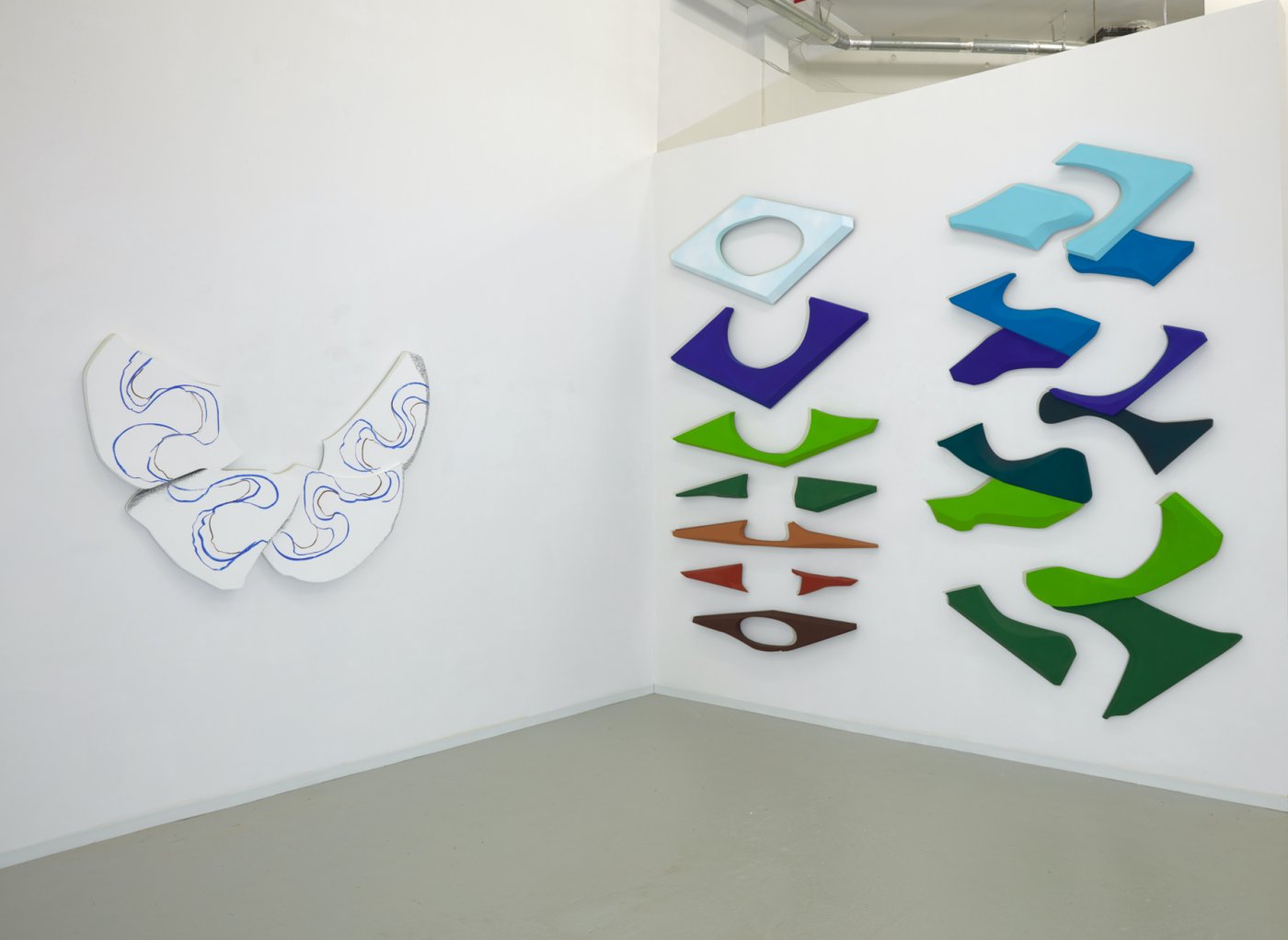 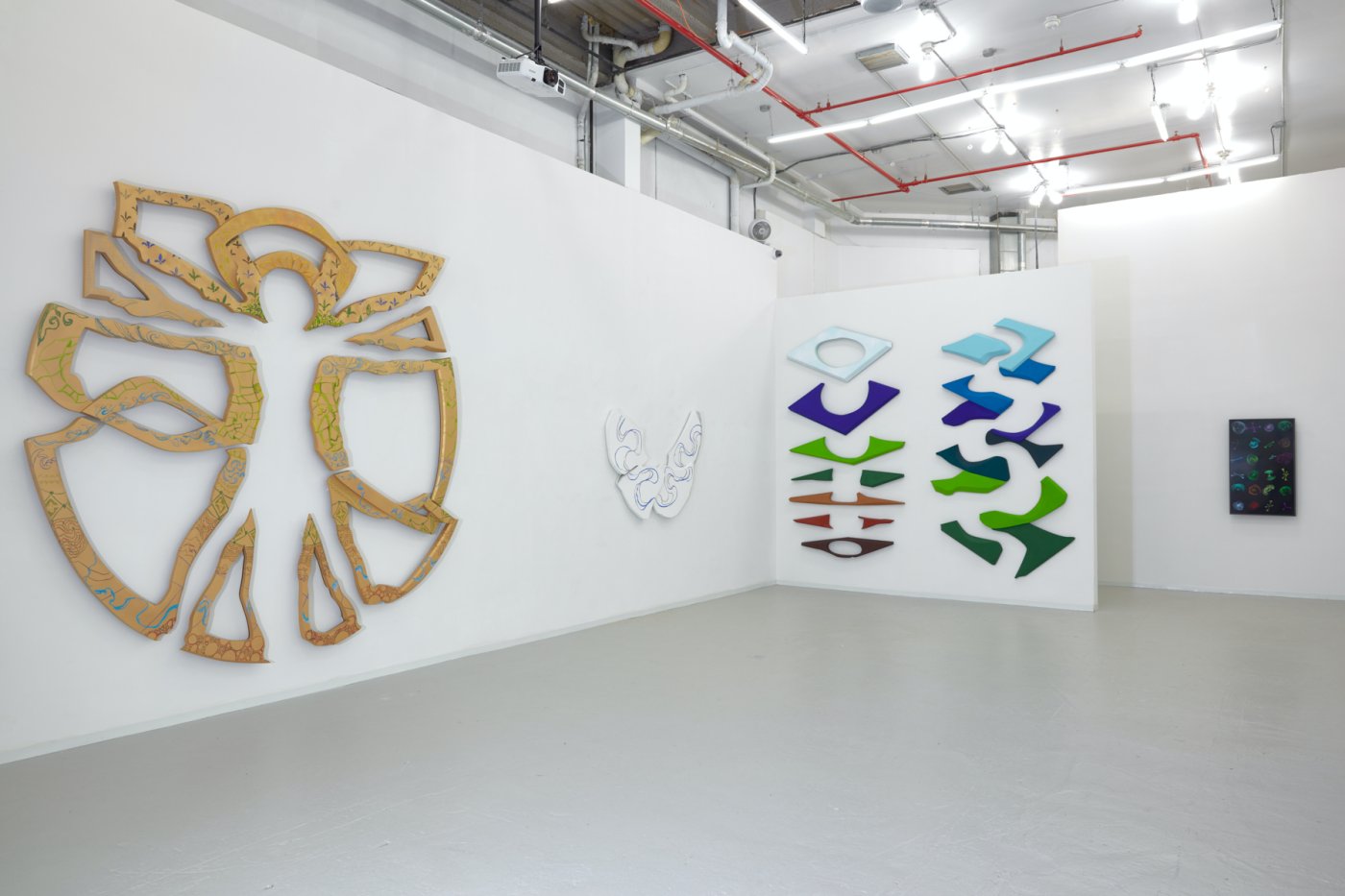 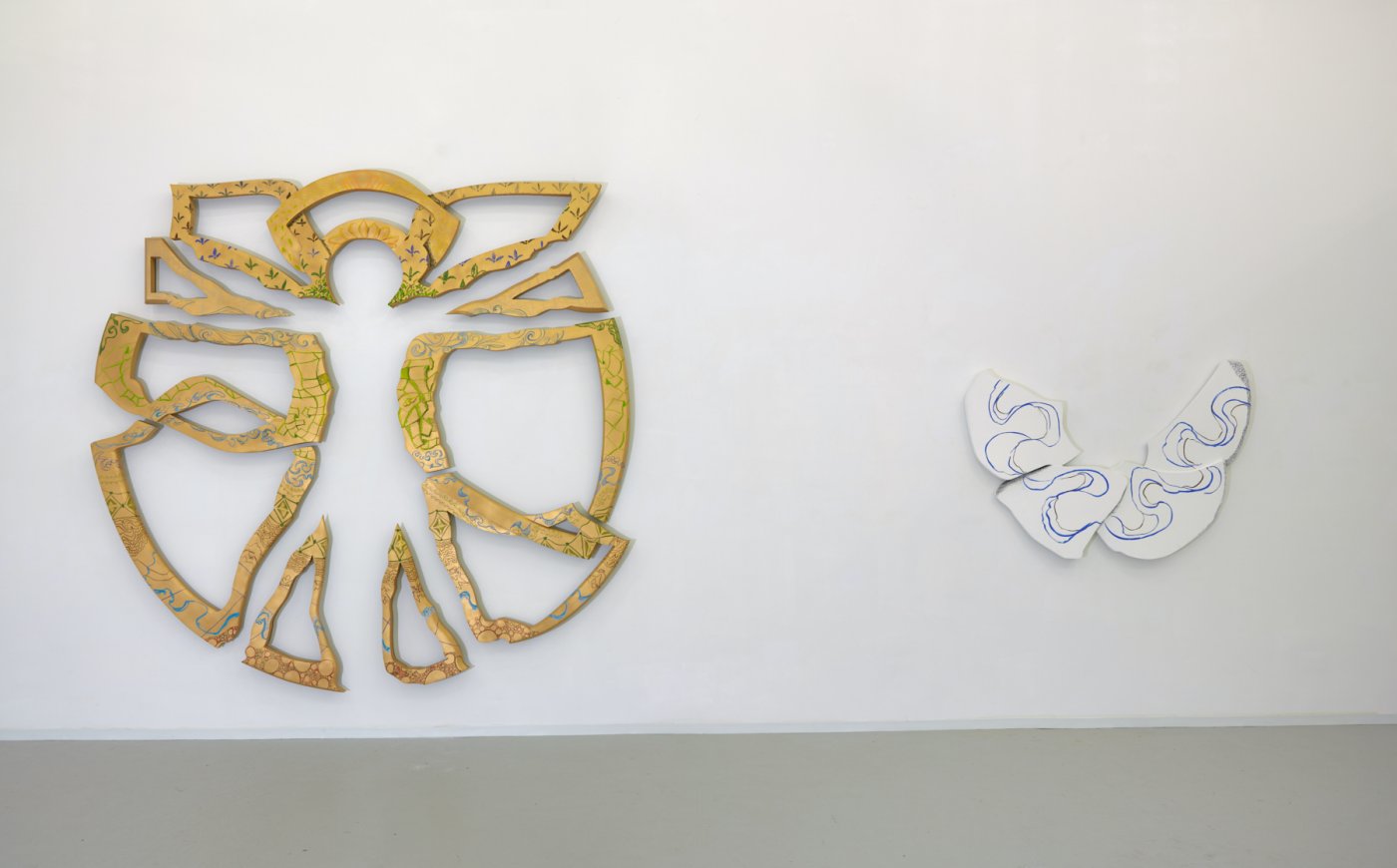 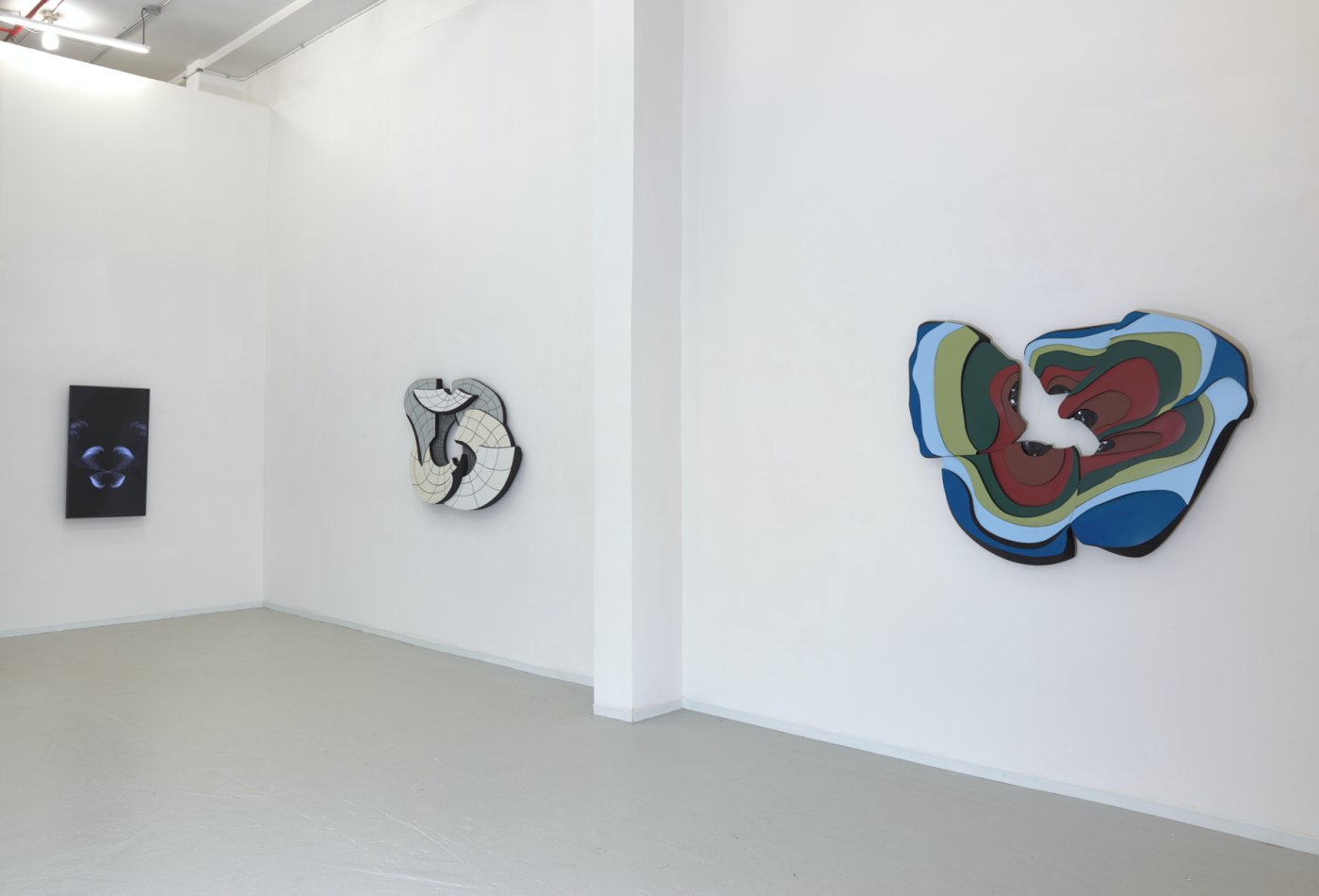 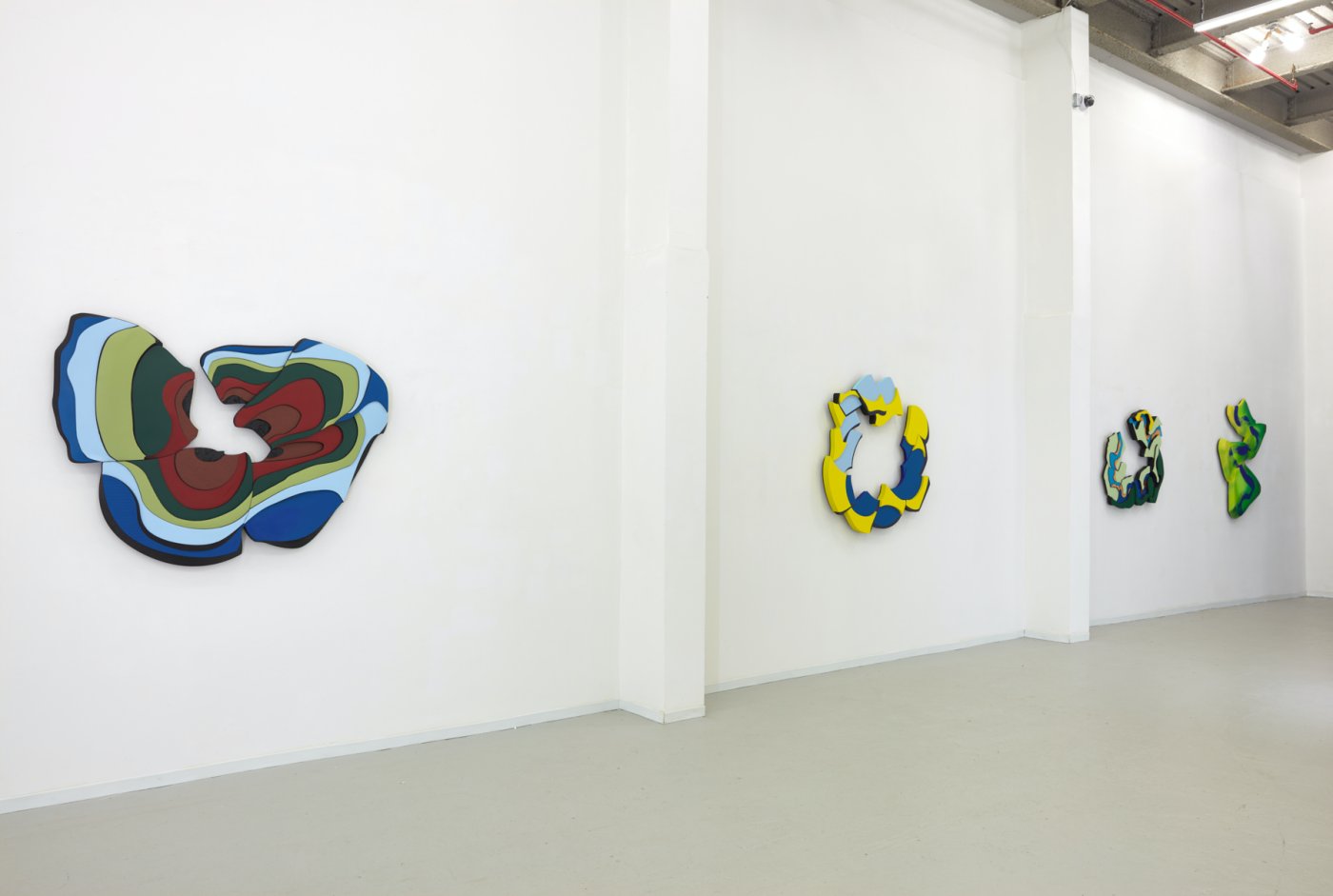 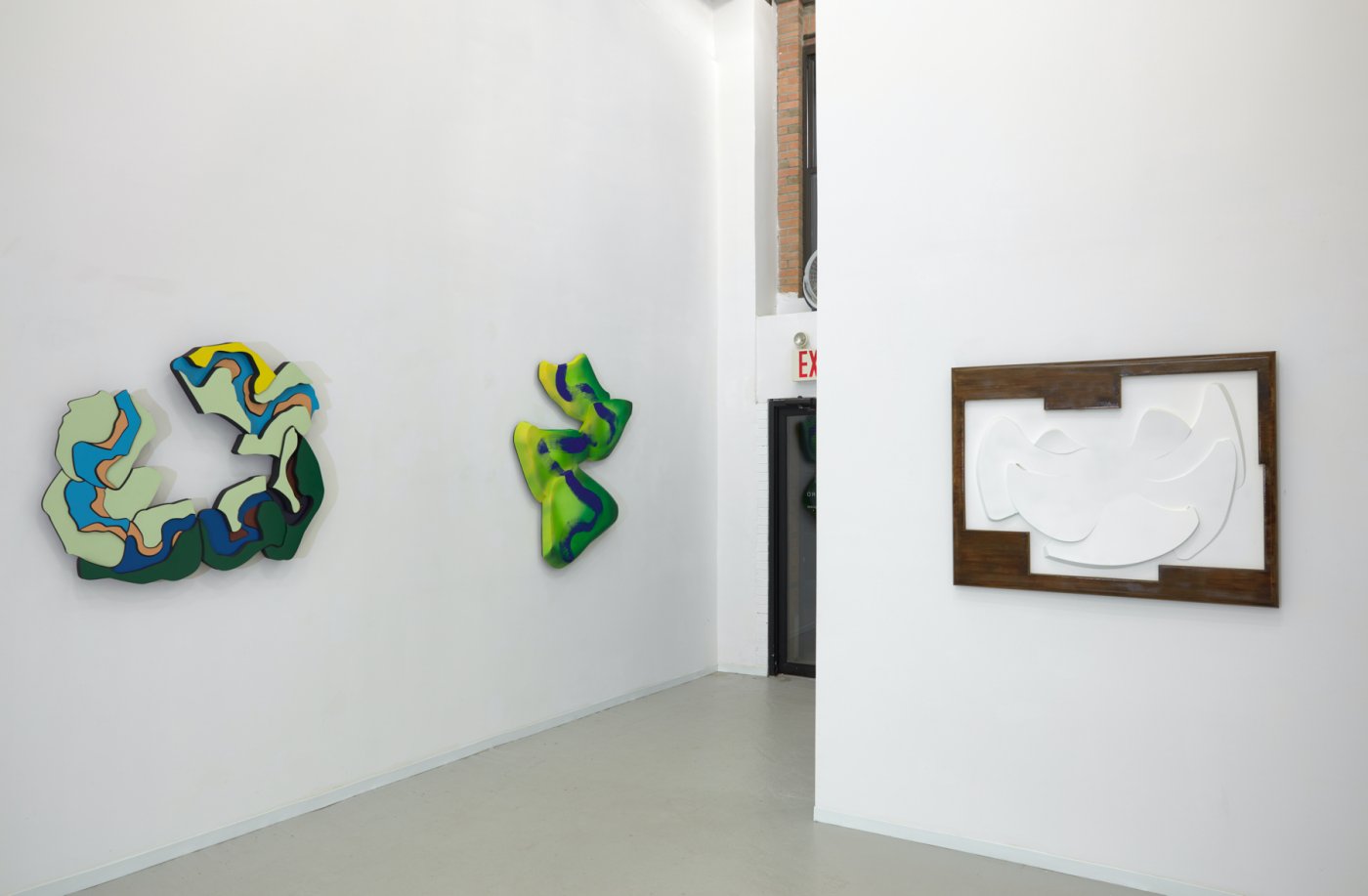 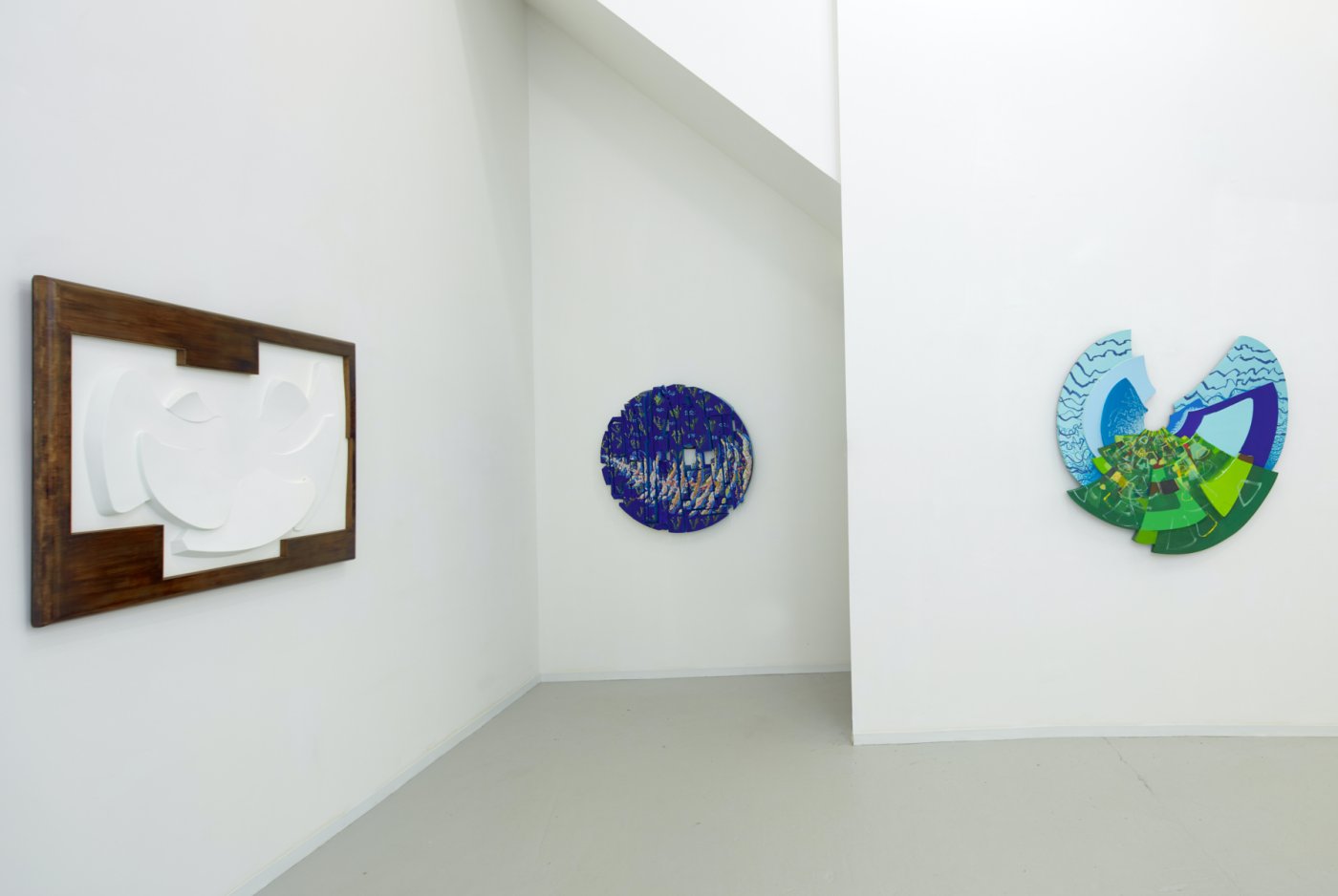 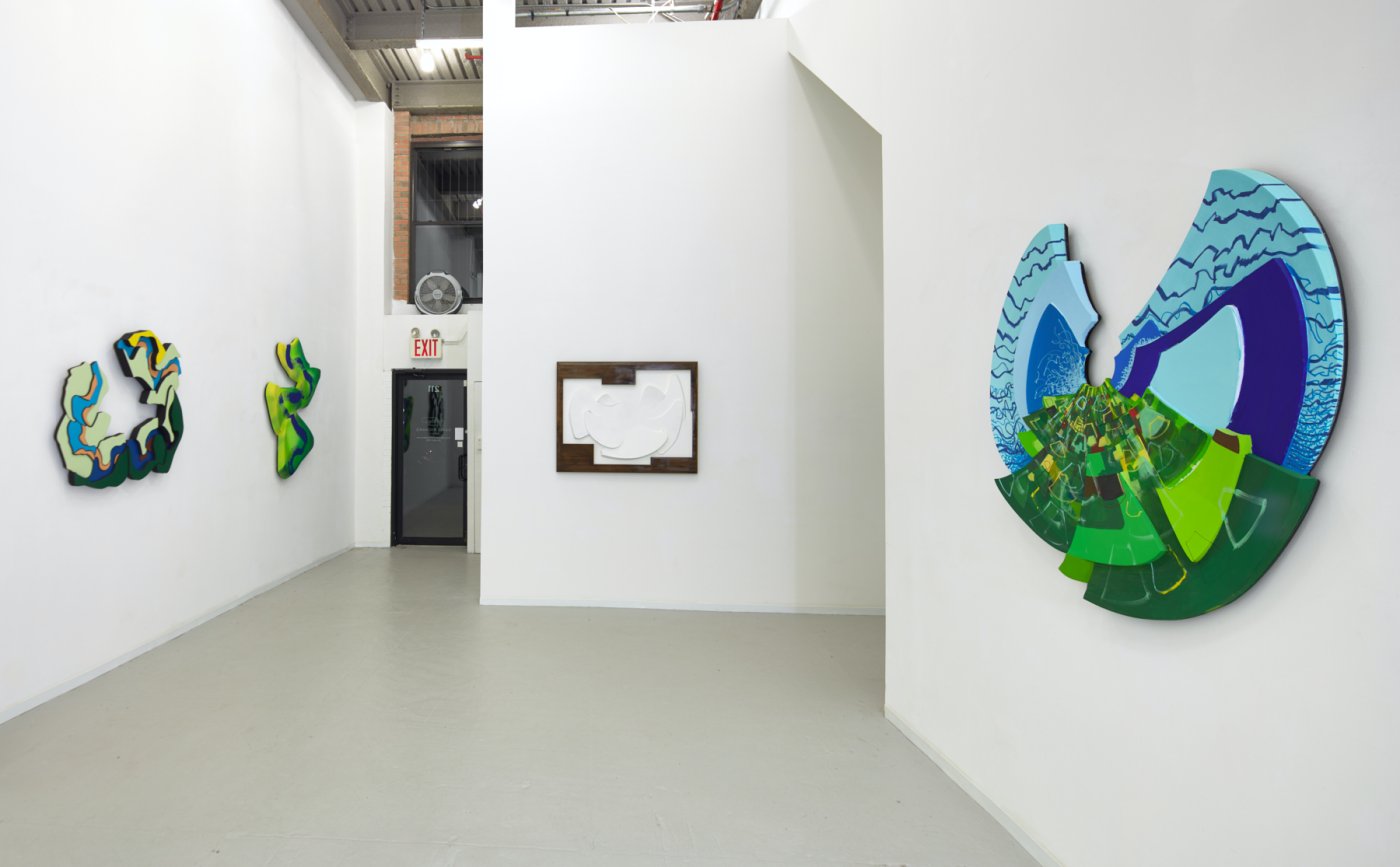 The title for the exhibition, Drawing Air, is also the name of the new software artwork. It was conceived and developed as a quarantine project during the Covid-19 pandemic shutdown in the spring and summer of 2020. The work consists of two identical tree structures lying on their sides as mirror images of one another. Per the proprietary software program created by Simon, the trees become animated, pulsing and growing, then retracting after each step, expanding ever larger with each pulse until they grow into one another and generate complex designs. During this recursive process the trees generate structures that resemble a pair of lungs, clearly, a vital organ necessary for breathing that is severely affected by Covid-19. In regard to the title, Drawing Air is synonymous with breathing and an appropriate name for the artwork and exhibition conceived during this troubling pandemic. Since this imagery is computed from the software in real time while viewing it on the monitor, there are subtle variations in terms of duration of each image as well as the speed, scale and other parameters, thus never repeating itself like a video loop. After a segment is completed the software program moves to a different set of instructions and images.

The dozen wall sculptures that comprise a majority of the exhibition, albeit stationary and a different medium than the software art, are very much related to the Drawing Air software in two distinct ways. First, all of the works in the show are derived from drawing. While the artwork Drawing Air was conceived and developed with software, the lines on screen are an ephemeral digital drawing, there one minute and gone the next. The wall sculpture designs were chosen from the thousands of drawings Simon has generated in his decades long daily drawing practice. Second, from a process perspective, all of these works were digital at some point along the way. After the drawings for the wall sculptures were selected, they were scanned and digitized, then modeled in 3-D and carved out of a foam-like material using a robotic milling machine in the artist’s studio. Following construction into the three-dimensional wall sculptures, the surfaces were painted and drawn on to bring the artist’s hand back to the final work.

The Innerhole series (2010) of mixed media constructions lives somewhere between painting and wall sculpture; both tactile and dimensional. While largely in a flat picture plane, the diverse materials and color adjacencies of these pieces provide a broad visual experience while evoking illusory spatial depth.

These large abstract works, strongly referencing nature, the earth, landscape, astral planes, and dimensional space emerge from Simon’s daily practice of mediation and drawing. The source drawings arise from introspection while clearing away daily noise from his head, the immediate environment, and surrounding material world. The drawings are improvisational and automatic; after the first mark is spontaneously made, the rest of the drawing flows organically and completes itself. Considering each image in relation to his ever-accumulating series of daily drawings, Simon searches for meaningful archetypes that reveal themselves through persistent patterns, shapes, and motifs. What remains persistent is enlarged and reimagined as works on paper and wall sculpture.

The images and compositions for the newest extension of the Innerhole series presented in the current exhibition were selected from the daily drawings where “open cycle symbols” appeared consistently. As background, “cycle symbols” resemble polygonal shapes in motion about a center. The interior of the ring in the original series (from 2010) was empty, forming the inner hole, also because the circle is complete, an “inner whole”. It is also interesting to note a specific feature in the original series of wall sculptures, where many of the boundaries of the open “inner holes” outlined silhouettes of human heads; these spontaneously appeared through Simon’s meditative and daily drawings. In the newest series, the rings are broken with a gap (a broken or open cycle) in some and a semi-circular shape in most others, while still others have become more linear as a stack of polygonal shapes. As for imagery, the warm feeling of the land with flowing water and lush vegetation in earth colors is inescapable. The inner holes and open cycles both have strong flowing shapes that evoke a swirling motion, making the gestures grand and dynamic, commanding a sense of water, wind and vast journeys on one hand, with strongly contrasting visions of the cool, geometric and constellation-like structures of the more expansive galaxy on the other hand; symbols collectively touching on the hermetic principle, “As above, so below.”

One of the most distinctive and unique works in this exhibition, Absence (2020), resembles Leonardo Da Vinci’s Vitruvian Man. The basic shapes come from Simon’s daily meditative and improvisational drawing practice. He began to notice a human figure emerging amongst the large, interlocking polygonal shapes that often appear in his drawings. These shapes arise from meditative teachings about the “empty self” or “no self”, similar to the silhouettes of human heads in the first series of Innerhole artworks. Most of the “action and surprises” Simon discovers in the drawings seem to originate in the negative spaces. This is a very significant and important aspect, not only of this particular artwork, Absence, but also in the entire body of work in this exhibition.

Da Vinci’s Vitruvian Man is a diagram of an idealized man in a circle and square together. However, Simon’s version is deconstructed and infers a figure in the voids between the elements that inherently define a person by way of their surroundings, possessions, influences, cultures and histories; yet the figure really is not there. This represents a realization of the emptiness of consciousness. The multiple gaps and voids in Absence are significant. In Simon’s initial Innerhole series, the works were all closed rings, a complete cycle (ie, circular). In the meditative world the closed loop reflects one being stuck in their cycle and their thinking, repeating one’s thoughts and processes. Initially this is helpful as it creates a pattern that identifies a real breakthrough. However, to evolve in meditation practice one attempts to break this cycle of dependently arising thoughts. In this new series of artworks there has been just such a break in the cycle, an opening has occurred. These breaks are important as they represent a moment when the mind can enter the process and interrupt the tendency to let our sensory responses take over or let our subjectivities or personal biases and stories control the narrative. The gaps or breaks represent awareness, the point when we are not attached to what we own and who we are, nor our stories—that awareness is also empty. Absence celebrates the continuum of awareness.

After Simon constructed this revelatory piece, following his process of digitizing and scaling it up to ten-foot square, then carving and painting, he wanted to bring back in the artist’s hand and enrich the surface with his improvisational drawings. Much to his surprise this became a summary of many marks, proceeding from the feet upward to the head, that correspond to the layers of the inner earth, the surface, and landscape as well as the sky with representations of geology, rivers, landscape, vegetation, mapping, agriculture, architecture, the knowledge of man, and then the heavens and skies.

In a discrete series of multifaceted constructions, Simon creates a continuum of an artist, on Earth and situated in the expanding universe. There is a Zen aspect to Simon’s approach as he uses his intuition and complex mind to create the images, yet they come out of his mind-clearing meditation practice, opening his imagination and receptivity to new possibilities. He becomes one with the Earth and the universe and his resulting artworks open our eyes and imaginations to new possibilities.

John F. Simon Jr, a New York-based artist who uses programming and digital language as his primary visual medium. He combines his digital explorations of color and pattern with diverse laser cut, engraved and inlayed materials, assemblages, paint and graphite to create complete environments and visualizations of meditative explorations. Simon also explores the web as an important tool for creativity and communication. He has been creating a new drawing everyday and posting them on iclock.com since 2008.

Simon earned his MFA in computer art from the School of visual arts in New York, an MA in Earth and Planetary Science form Washington University in St. Louis, as well as a BA in Studio Art and BS in Geology, both from Brown University in Providence, RI. His artworks have been exhibited internationally and he was represented by Sandra Gering in New York for much of his career, Simon has had numerous museum exhibitions at Whitney Museum of American Art, New York, Solomon R. Guggenheim Museum, New York, The Albright Knox Art Gallery; Buffalo, NY, The Phillips Collection, Washington, DC, Digital Art Museum [DAM], Berlin, Germany, Louisiana Art and Science Museum, Baton Rouge, LA, Alexandria Museum of Art, Alexandria, LA, The Aldrich Museum of Contemporary Art, Ridgefield, CT, University of Iowa Museum of Art, Iowa City, IA, University Art Museum, University at Albany, State University of New York, Albany, NY, an Antonio Museum of Art, San Antonio, TX, Denver Art Museum; Denver, CO, among many other others.