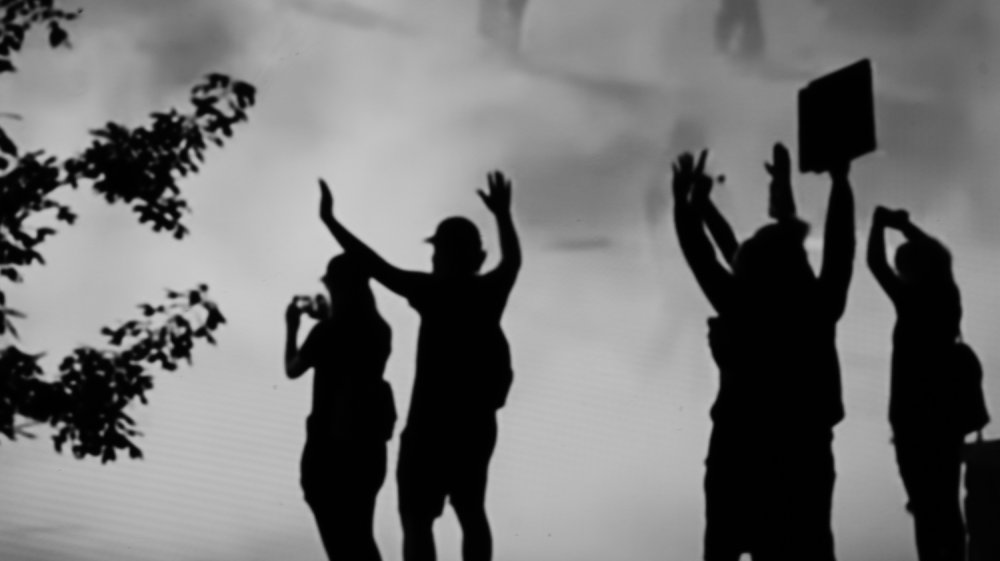 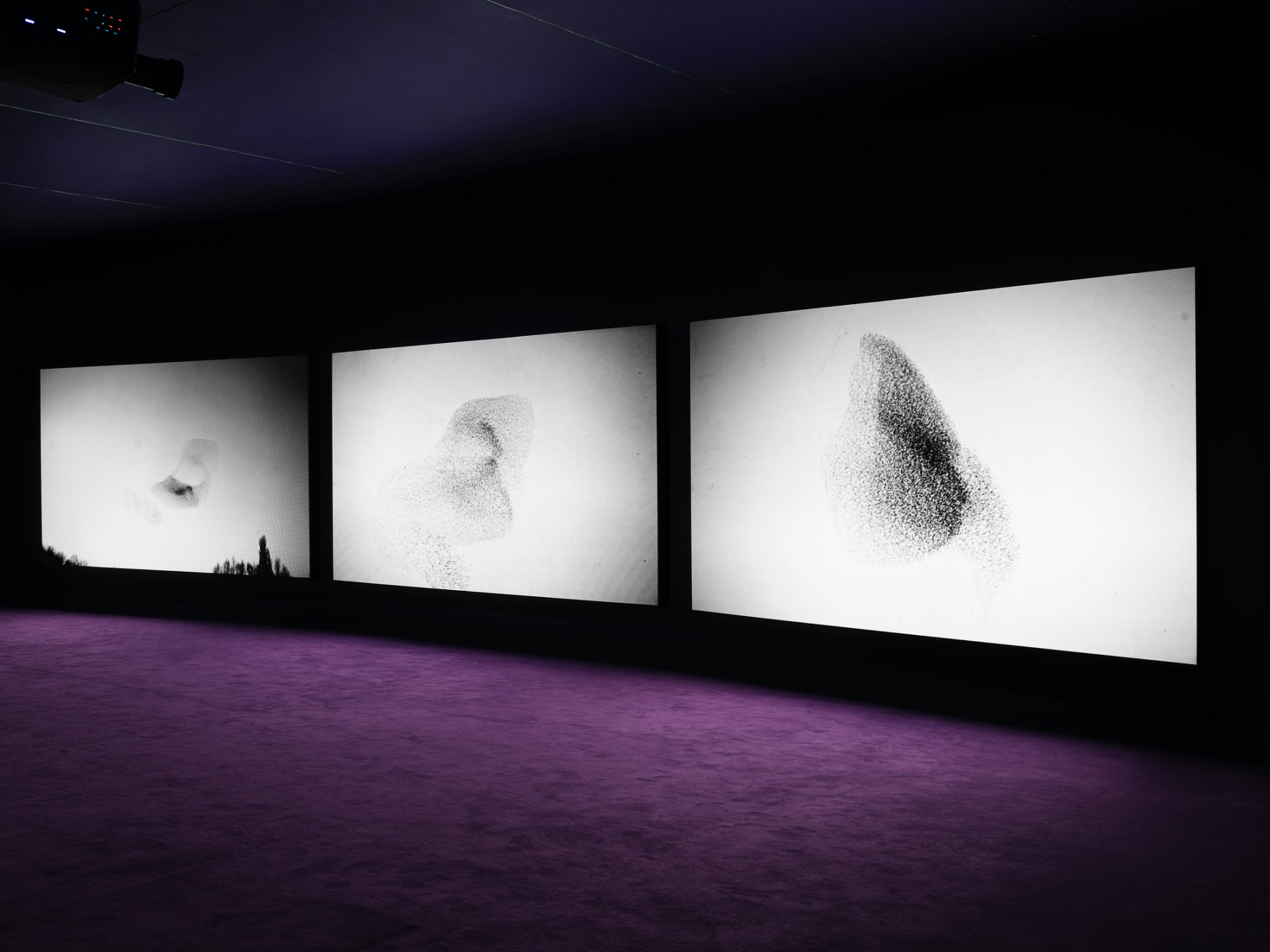 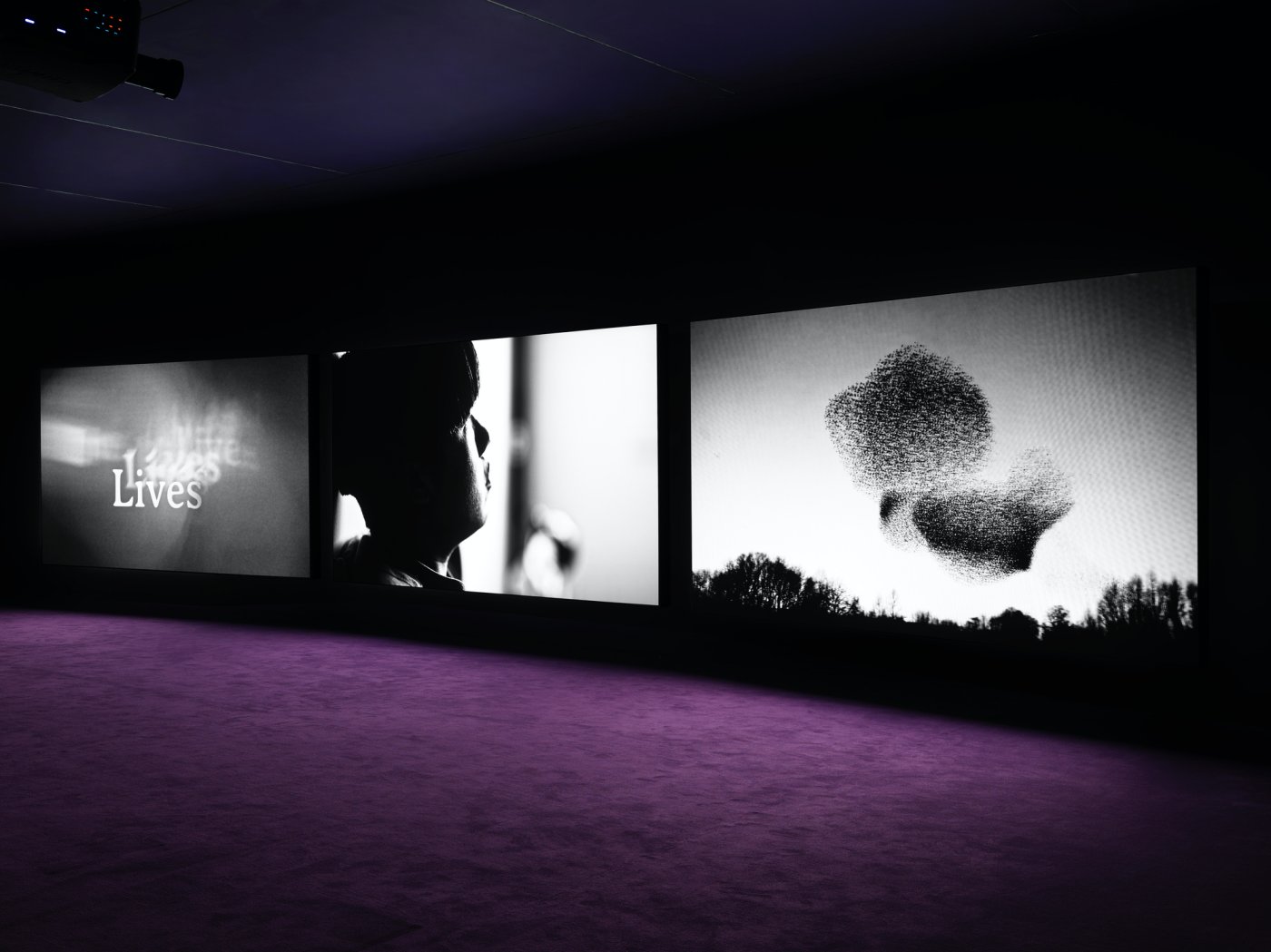 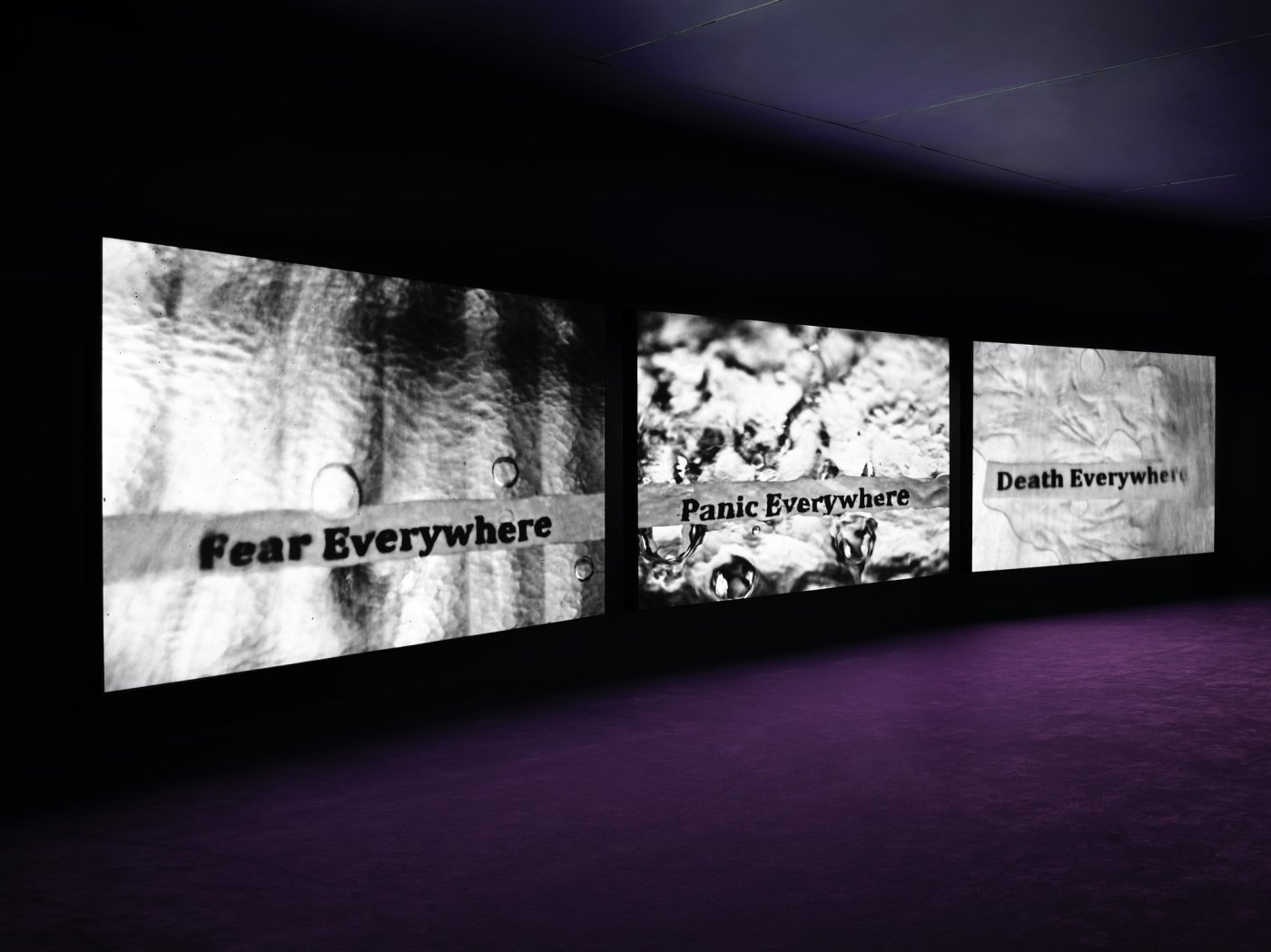 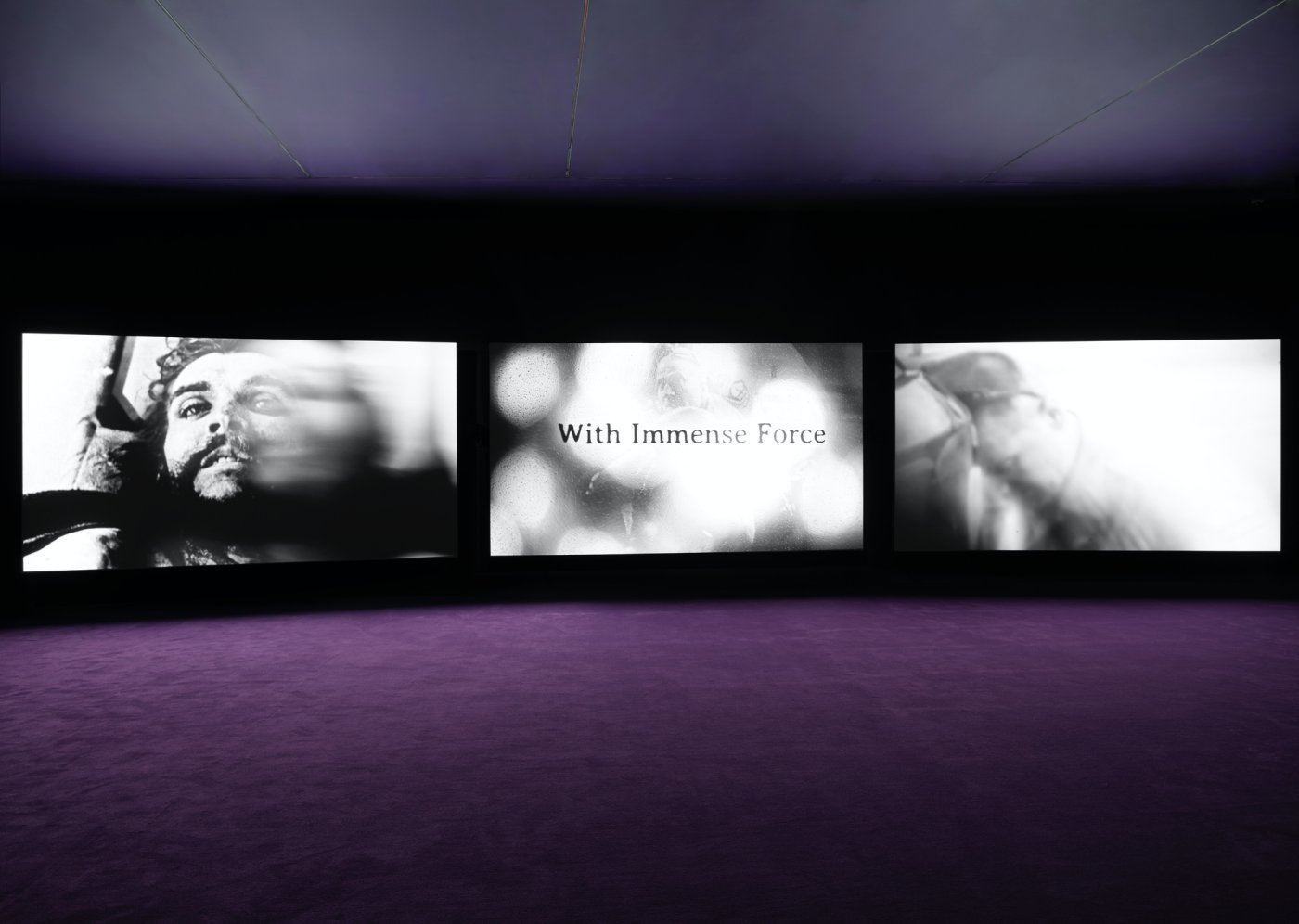 Since March 2020, the London-based artist and filmmaker John Akomfrah has been working on the longest continuous-running project of his career. Living through one of the most turbulent, monumental periods in history, Akomfrah has turned his attention to the creation of a filmic archive of today, made in real-time, documenting how individuals and communities have been coping with the pandemic, the radical mobilization seen on the streets and the disruption of cycles of racism, and the increasingly urgent crisis of climate change. Culminating in a new three-screen video installation, this body of work is a deep exploration into our understanding of the personal within a collective consciousness of emergency, portraiture, mortality, revenge, mourning and memory.

Akomfrah has gained renown for engaging with the most pressing global questions concerning us today – from the destruction of our fragile global environments, to post-colonialism and the specters of those past histories; from memory as literal archive, to the temporal and spatial tropes of race in landscapes. This past year, as the world lurched from one global crisis to another, Akomfrah – like the majority of the population – was forced to shield at home. During this time, he worked remotely with his team worldwide to collect local footage in order to document and reflect the current condition. The resulting work, presented in five orchestrated murmurations, is entitled FIVE MURMURATIONS, referring to when a flock of birds fly in tight, fast formation as a defense mechanism against predators. These chapters act as markers for the themes explored, resulting in a powerful reflection of our experience living today, one that is both dark and haunting yet cathartic, reminding us of how crisis can yield change. Metonymic and metaphorical in its composition, the exhibition impressionistically highlights our psychological and physical responses to the lockdowns, the incompetence of our politicians in the face of this challenge and the international reckoning of racial inequalities highlighted by the Black Lives Matter movement.

Against the backdrop of the daily shifting tectonic plates of the pandemic, Akomfrah’s new work is what he calls “gestalt cinema”, an exhibition that mirrors our “current emotional states” as well as “states of emotion” themselves. The film takes its cue from Akomfrah’s obsession with early cinema; the work is shot entirely in black and white, forming a bricolage of new and archival footage, bringing together newly shot footage, found footage and 19th century early photography. Alongside the imagery, a sonic soundscape – designed by Akomfrah in collaboration with an ensemble of composers – poetically weaves the passages of the film together.

The thematic and formal template of this new project is founded in the two highly acclaimed and ground-breaking works by Akomfrah that featured in previous Venice Biennales – Vertigo Sea ( 2015) and Four Nocturnes (2019). FIVE MURMURATIONS continues the engagement of these prescient concerns, using the subjects and images as ghosts of past conversations, be it real or imagined. Recent tragic incidences and victims of 2020, including Breonna Taylor, George Floyd and 13 year old Adam Toledo from Chicago, find their moments in Akomfrah’s portal, echoed through imagery of tragedies in art history, such as Andrea Mantegne’s Lamentation of Christ (1480).

John Akomfrah is a hugely respected artist and filmmaker, whose works are characterised by their investigations into memory, post-colonialism, temporality and aesthetics and often explores the experiences of migrant diasporas globally. Akomfrah was a founding member of the influential Black Audio Film Collective, which started in London in 1982 alongside the artists David Lawson and Lina Gopaul, who he still collaborates with today. Their first film, Handsworth Songs (1986) explored the events surrounding the 1985 riots in Birmingham and London through a charged combination of archive footage, still photos and newsreel. The film won several international prizes and established a multi-layered visual style that has become a recognisable motif of Akomfrah’s practice. Other works include the three-screen installation The Unfinished Conversation (2012), a moving portrait of the cultural theorist Stuart Hall’s life and work; Peripeteia (2012), an imagined drama visualising the lives of individuals included in two 16th century portraits by Albrecht Dürer and Mnemosyne (2010) which exposes the experience of migrants in the UK, questioning the notion of Britain as a promised land by revealing the realities of economic hardship and casual racism.

In 2015, Akomfrah premiered his three-screen film installation Vertigo Sea (2015), which explores what Ralph Waldo Emerson calls ‘the sublime seas’. Fusing archival material, readings from classical sources and newly shot footage, Akomfrah’s piece focuses on the disorder and cruelty of the whaling industry and juxtaposes it with scenes of many generations of migrants making epic crossings of the ocean for a better life. In 2017, Akomfrah presented his largest film installation to date, Purple (2017), at the Barbican in London, co-commissioned by Bildmuseet Umeå, Sweden, TBA21—Academy, The Institute of Contemporary Art/ Boston, Museu Coleção Berardo, Lisbon and Garage Museum of Contemporary Art, Moscow. The six-channel video installation addresses climate change, human communities and the wilderness. More recently, Akomfrah debuted Precarity (2017) at Prospect 4 New Orleans, following the life of forgotten New Orleans jazz singer Charles ‘Buddy’ Bolden. In 2019, on the occasion of his participation at the first Ghana Pavilion at the 58th Venice Biennale, John Akomfrah presented Four Nocturnes (2019), a three- channel piece that reflects on the complex intertwined relationship between humanity’s destruction of the natural world and our destruction of ourselves.