The gallery FeldbuschWiesnerRudolph inaugurates its new space with an exhibition by Johanna von Monkiewitsch. 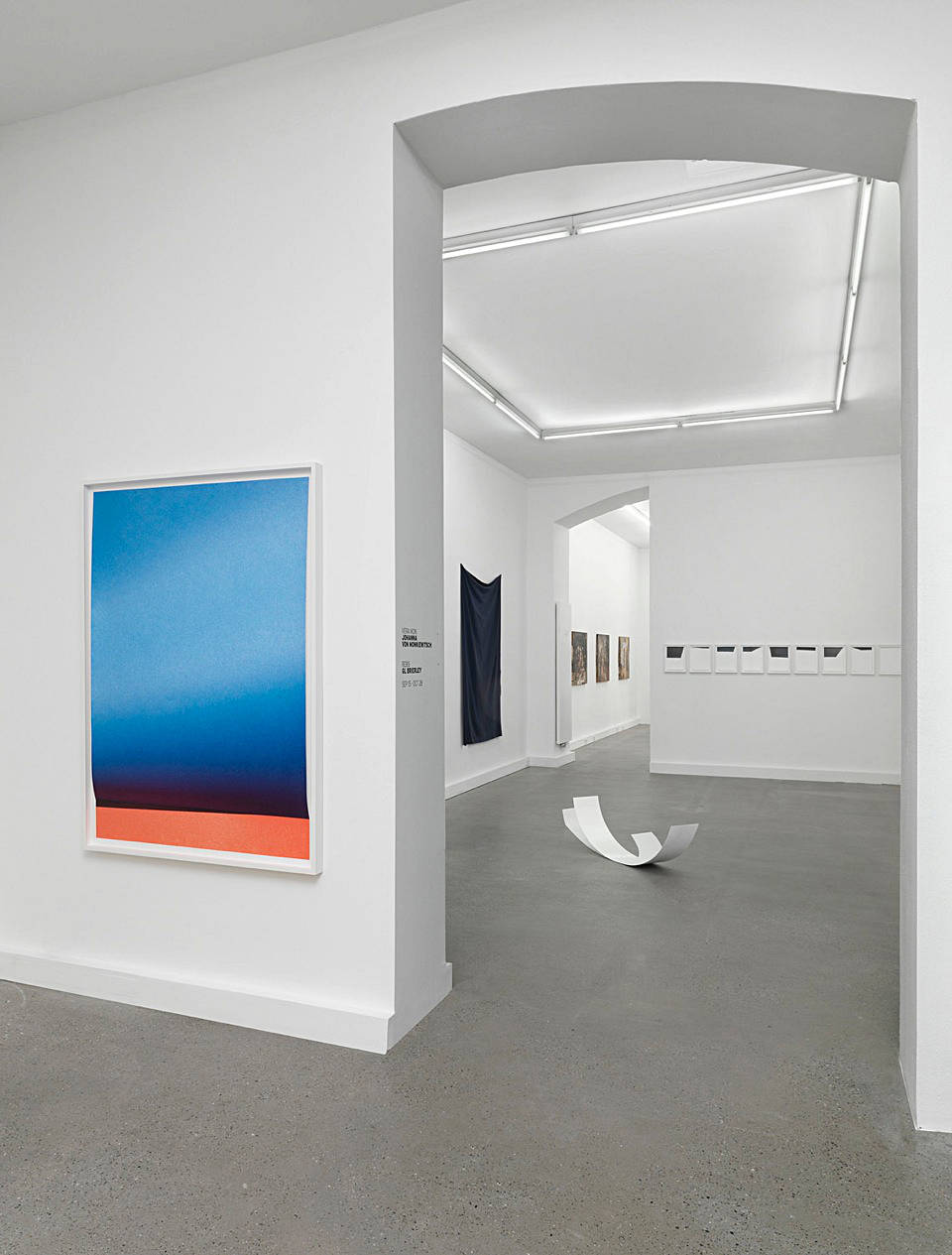 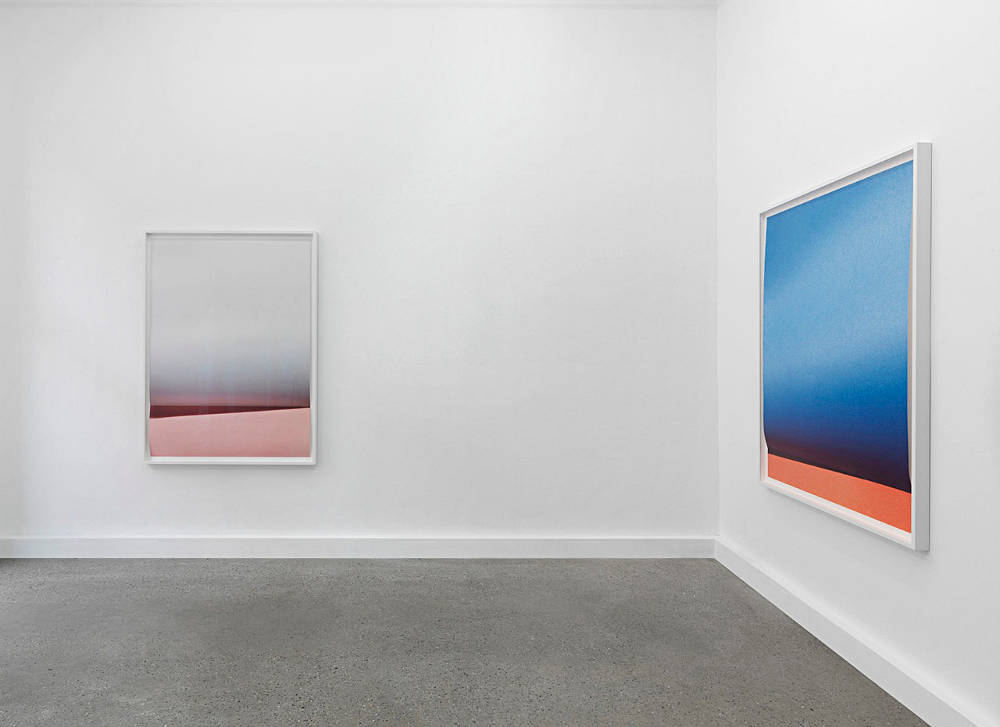 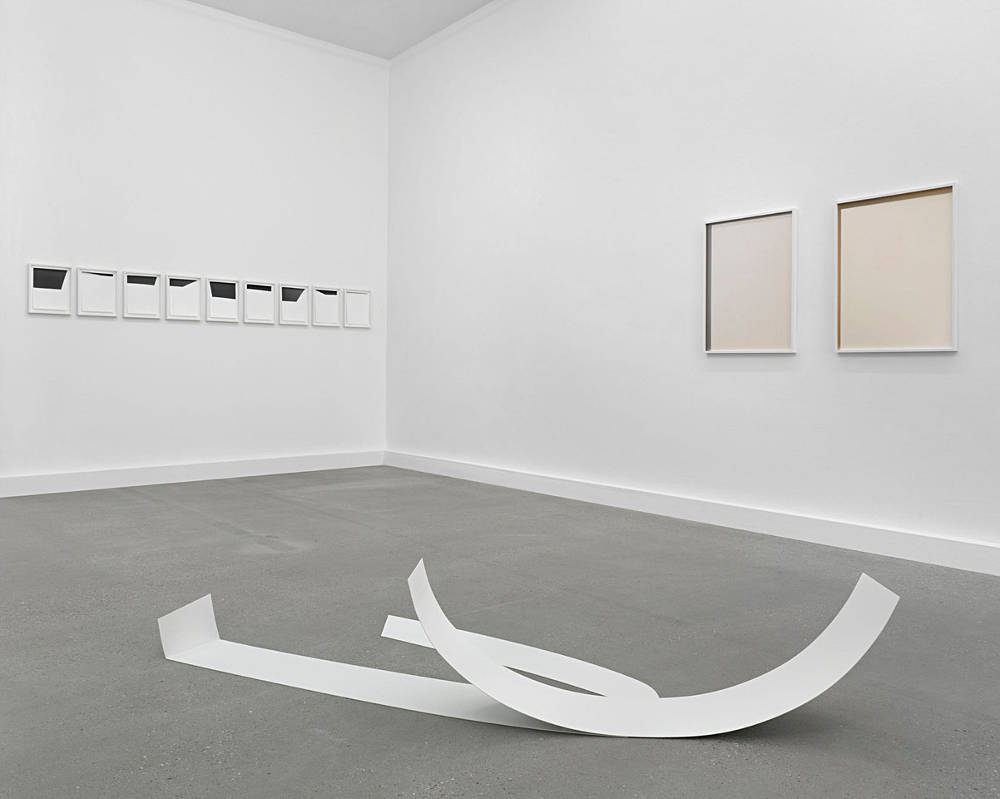 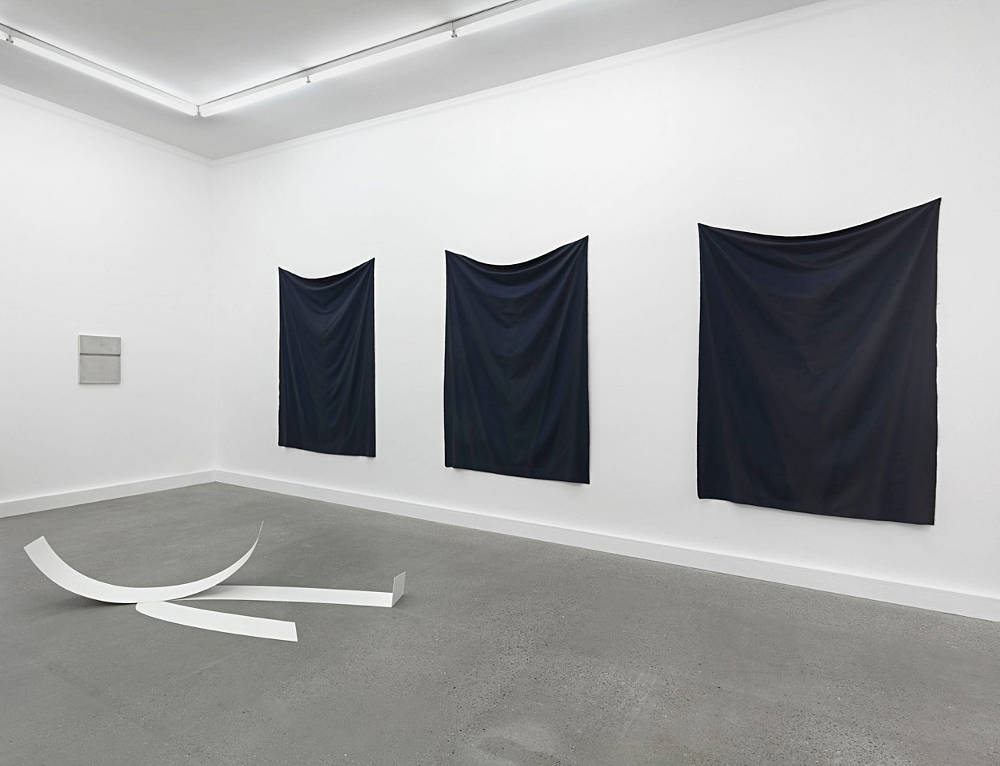 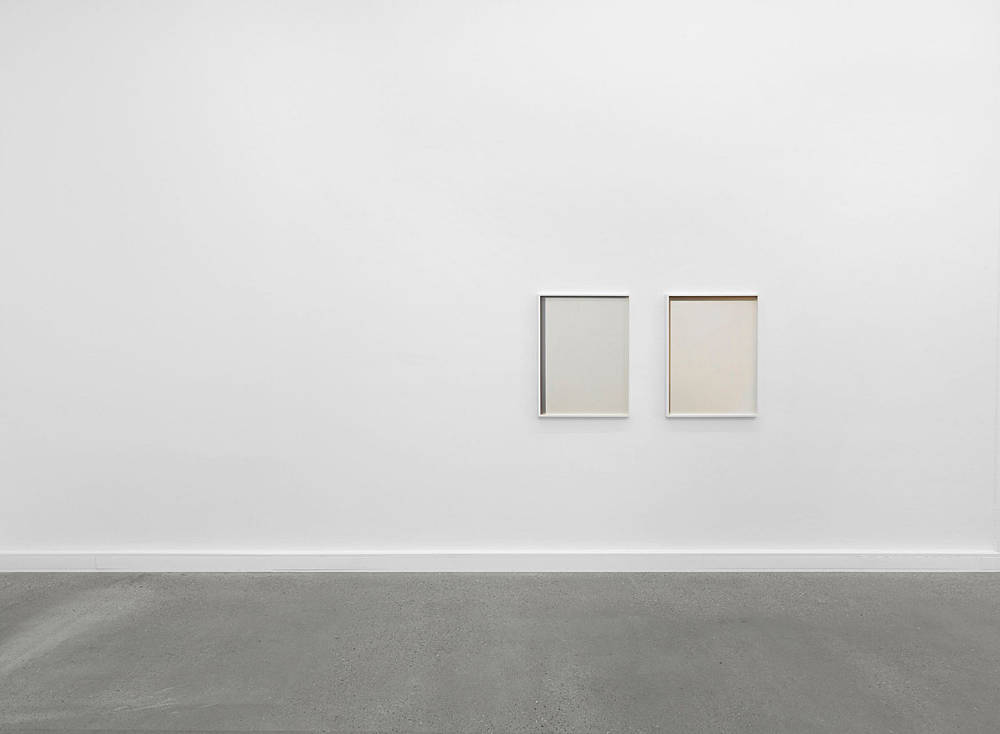 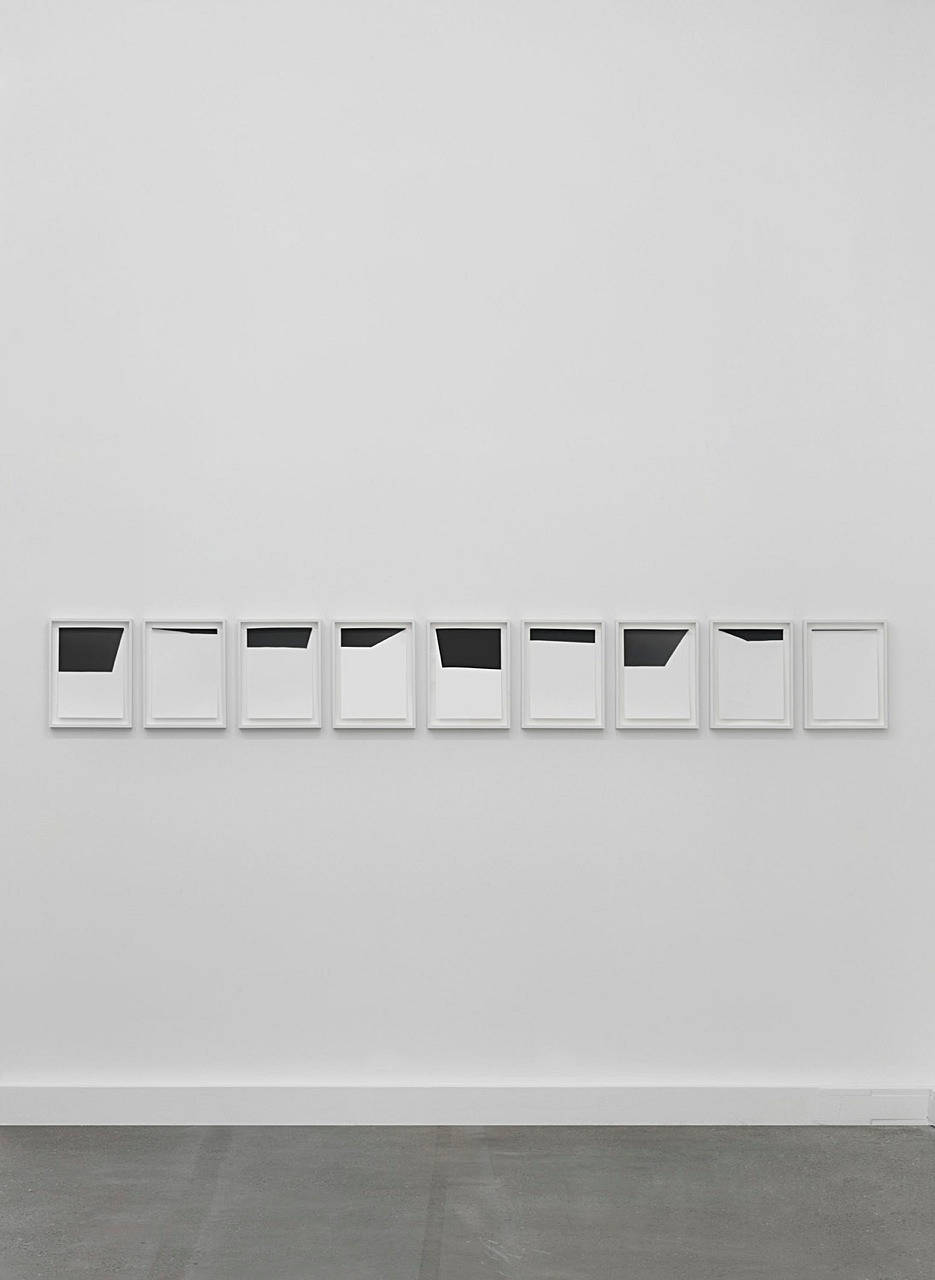 Johanna von Monkiewitsch (born 1979 in Rome) creates minimalist works by calling on the basic elements of construction: light and shadow.

In her first solo show at FeldbuschWiesnerRudolph, the artist presents new works in the genres of sculpture, object-based art and photography. The artist first made a name for herself by creating large-format, chromatic pigment prints that make a statement that is both pictorial and sculptural. Two works in this series are included in the exhibition, next to a nine-part series of small-format photo prints featuring grey and white modulations that are rich in contrast. Conceptually, these prints address the relationship between image and copy by having a seam in the upper section of the image repeat itself tautologically on the levels of surface and space. One way of looking at the series is from a distance and thus in its entirety. This view allows us to contemplate the series in its condition of chronological disorder. Accordingly, it becomes for us an associative horizon that is all the more lyrical. Walter Benjamin, in his essay “Short Shadows” said something like this: “(…) Toward noon, the shadows are reduced to the black, sharply delineated borders down at the feet of things, ready to withdraw, silently, suddenly, into their burrow, their mystery. (…) Because, like the sun, the moment of recognition outlines its objects with the utmost precision when it has reached the zenith of its trajectory.”

Von Monkiewitsch’s sculptures are leaning against the wall, outlined with a similar sharply delineated border. Or they present themselves standing up without any props or lying down, partially, in the high-ceilinged space of the gallery. They are strips made of wood or steel and bent into shapes that form geometrical arcs or circles. They demonstrate their multifaceted character through complex un-foldings, strongly pronounced foreshortenings or distorted perspectives. In her sculptures, the artist allows the original object to seamlessly fuse with the image of the shadow it throws. What at first glance appears enigmatic, all of a sudden discloses itself to the viewer as a logical form as they walk full circle around the object. The shadow shape of the original merges with the original form and thereby creates a single object.

Strikingly still, as if timeless and strangers to the discourse on Minimalism – thus appear von Monkiewitsch’s monochromatic textile icons. The artist most recently worked on them during a stay in Italy and took them further. Like almost all of her works, these too record in their titles the date and place of their emergence. Freely attached to the wall, the large-format linen sheets are mounted to form gentle, three-dimensional waves that present themselves assertively to the viewer. Barely visible at first glance, there are light and shadow impressions which have “burned” themselves into the folds of these monochromatic linen sheets. One could speak of a natural exchange of energy that uses light to transform the sculptural folds in the fabric into the medium of a pictorial language of forms.
Similar to a “Vera Icon,” the fabrics present their own (historical) shadow by having it dissolve and merge into the light/shadow continuum of real space-time. It seems as though the image and the object fuse in von Monkiewitsch’s works and thereby call into question our belief in the difference between image and reality. The once congruous mirror image between the material picture of the (historical) shadow and the fleeting light-shadow continuum (in real time) is broken. But within the reciprocal animation of von Monkiewitsch’s textile icons, “(…) mimesis attains at the point where it conjures a missing body a (new) ontological dimension.” (Hans Belting on light and shadow in relation to Dante’s “Divine Comedy”).

Parallel to the exhibition in the gallery, we will present a small selection of the artist’s works at this year’s art berlin (Sept 14-17, 2017). In addition, two light installations and a sculpture by Johanna von Monkiewitsch can currently be seen in the exhibition “Ritratto/Copia-Portrait/Copy,” which is part of the MUVE Contemporaneo program at the Ca’ Rezzonico museum in Venice (until Oct. 30, 2017).

Johanna von Monkiewitsch (born 1979 in Rome, Italy) studied fine arts at Braunschweig University of Art (HBK) and completed her M.A. with Professor Heinz-Günter Prager.
2011, von Monkiewitsch has been the recipient of a studio scholarship from the Kölnische Kunstverein in Cologne. She also received an art scholarship from the Stiftung Kunstfonds, Bonn (2014), and a research grant from the Deutsches Studienzentrum in Venice, Italy (Germany’s Rome Prize) (2016).
Her work has been shown in several international group shows, including at Kunstraum Alexander Bürkle, Freiburg (2015), Museum for Concrete Art, Ingolstadt (2014), Museum Kunstpalast, Düsseldorf (2014), and Kunsthalle Wilhelmshaven, Germany (2013), as well as in solo shows at Ca’ Rezzonico, Venice (2017), ak RAUM, Cologne (2017), Centro Tedesco di Studi Veneziani, Venice (2016), Art Cologne (2016), Jette Rudolph Gallery, Berlin (2016), Berthold Pott Gallery, Cologne (2015), Kunstverein Wolfenbüttel, Germany (2014), and in the OG2 exhibition space of the Kölnischer Kunstverein, Cologne (2012). The artist lives and works in Cologne. 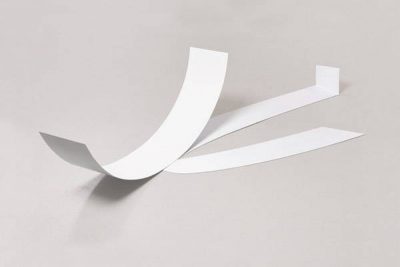