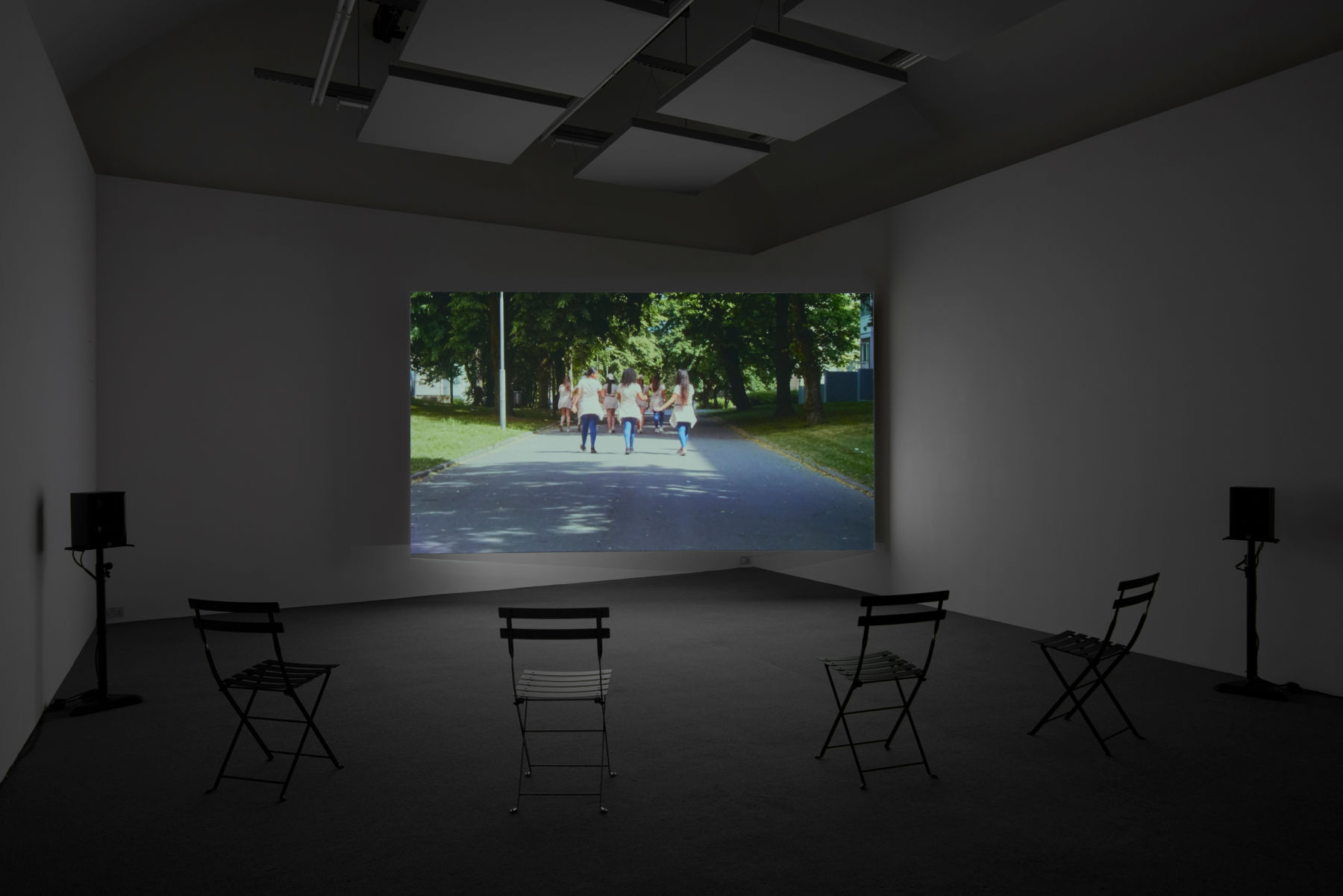 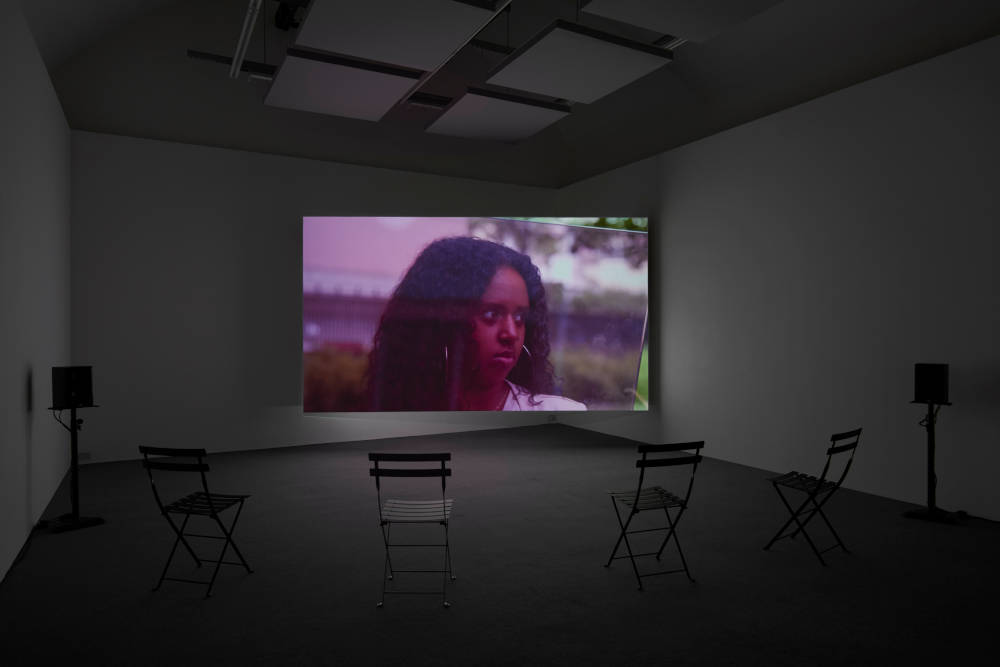 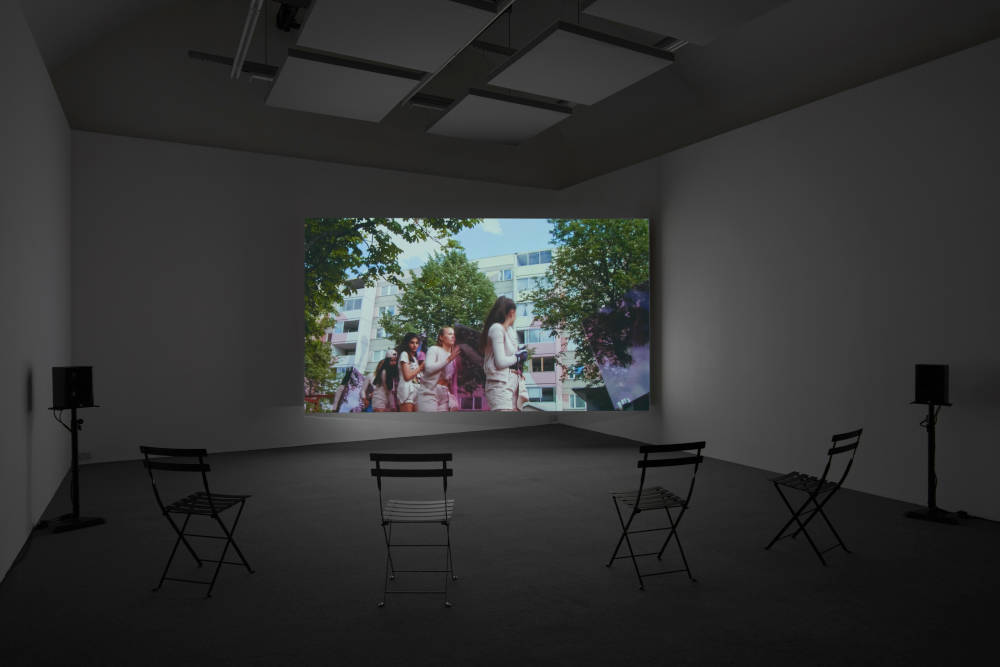 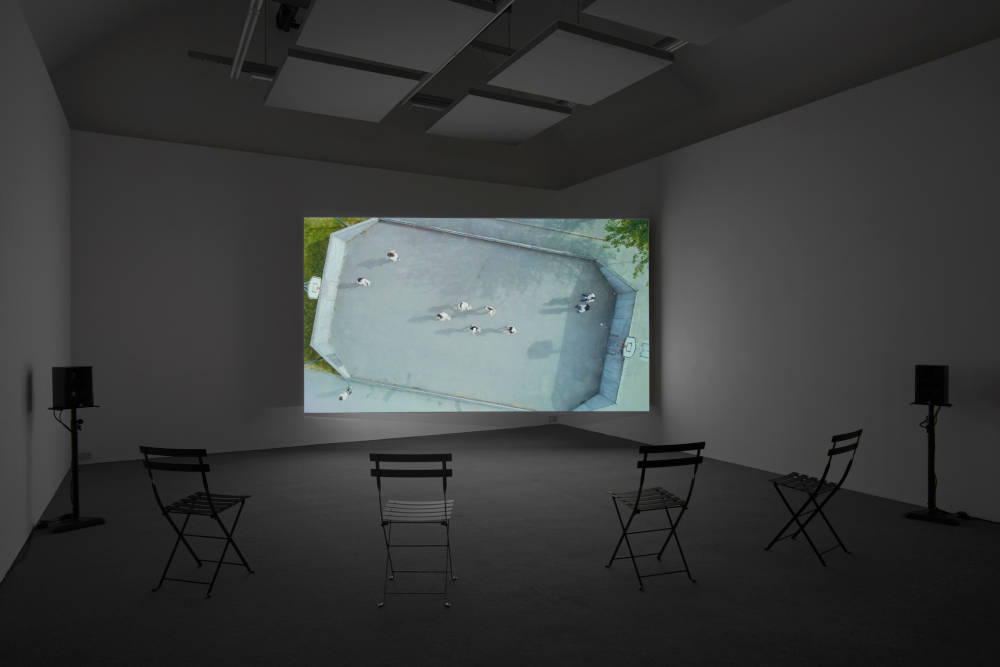 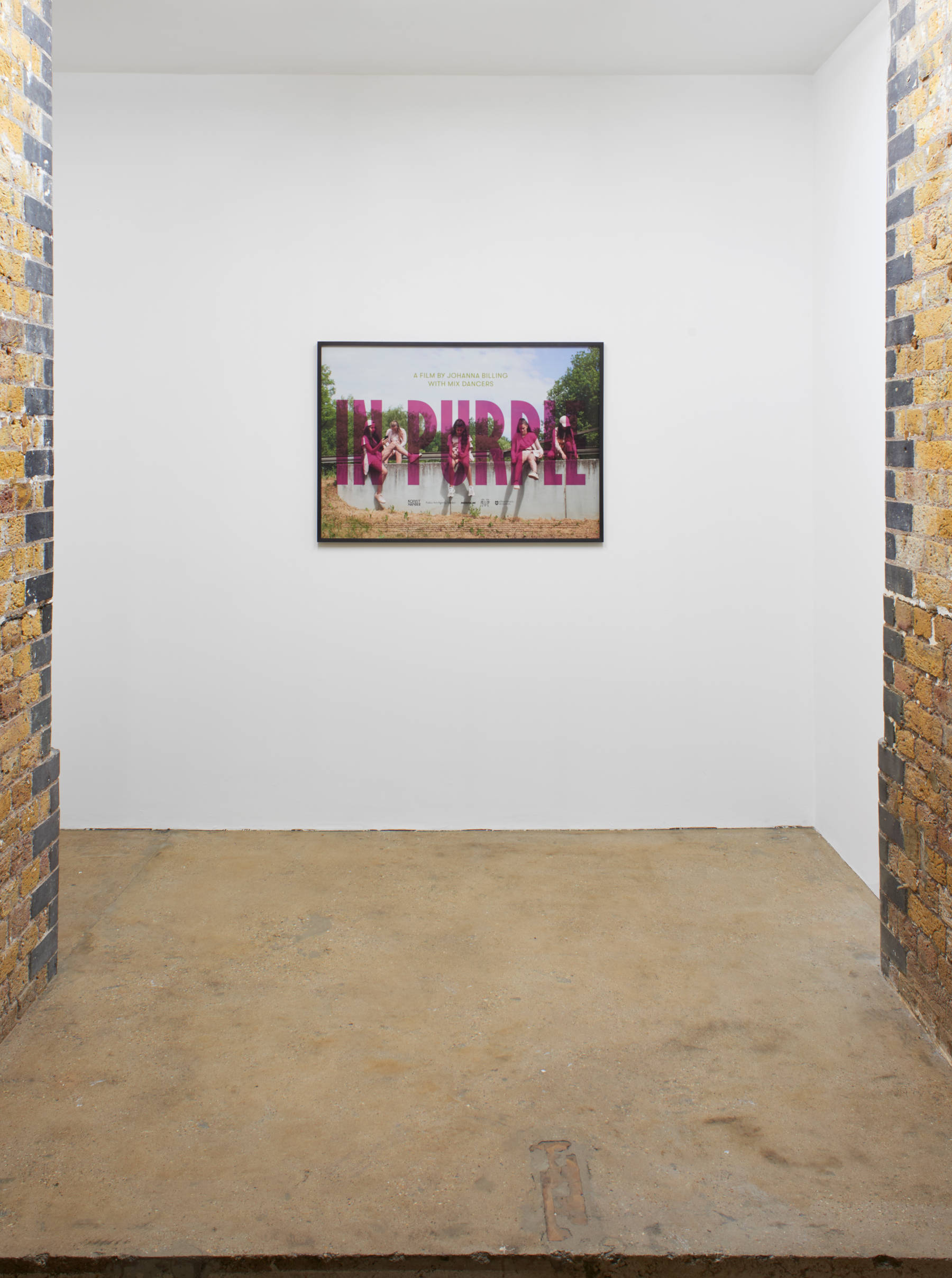 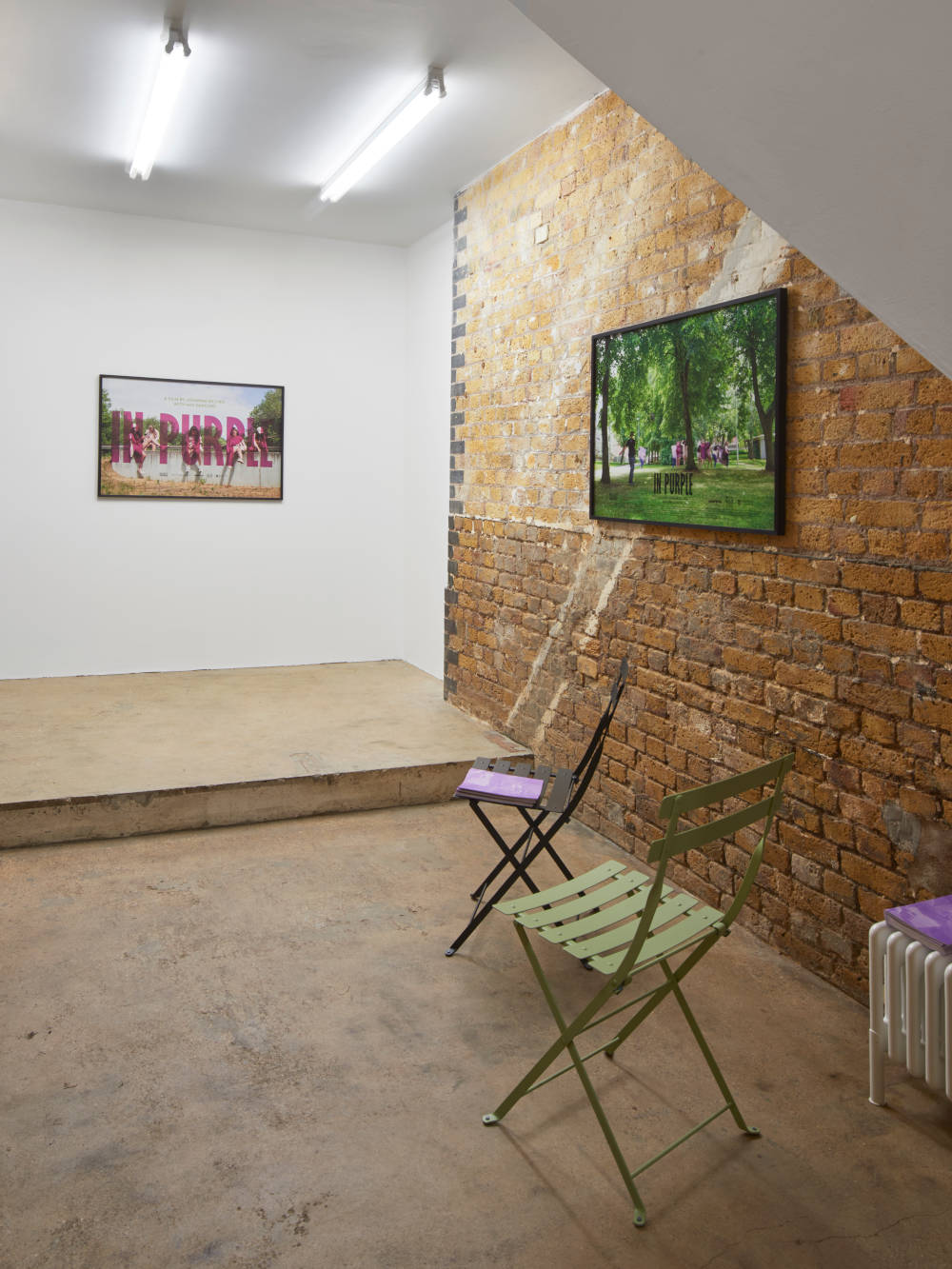 A group of young women and girls move slowly through pedestrian paths and greenery in a choreographed parade. They carry between them large, heavy sheets of purple-coloured glass. They pause between movements, shifting step by step. In this action, in which the young women of the group hand over the unwieldily sheets of glass to younger, teenage members, the relationship between limbs and scale stretches them. Their actions are determined and focused, yet vulnerable. A small mistake could damage both the panes of glass and body.

Johanna Billing and the dance group Mix Dancers worked together over a three-year period. The resulting film, In Purple, was prompted by an invitation from Public Art Agency Sweden(1) to create a public art work within the context of the country’s Modernist housing. Mix Dancers is based in Råslätt, a suburb of Jönköping in central Sweden where Billing is also from. Mix Dancers was established 12 years ago by a then group of teenagers performing hip-hop and Afro dance styles whilst also running an accompanying dance school, Mix Dancers Academy, on a voluntary basis. In Purple is framed by the context of how difficult it can be to sustain not for-profit activities, and how a generation of young pioneers are now handing over their labour to the next generation. The choreographed movement of the dancers handing over the heavy and fragile sheets of glass to a younger generation visualises the precarity these young girls are subject to due to continuous expectations from local politicians to keep the school going.

Billing and Mix Dancers collaboratively moulded a vision that took as its core both Mix Dancers’ and the artist’s own experiences of running self-organised initiatives. Taking shape through shared authorship, the work is a hybrid between the ethos of the group and that of the artist. The dancers and artist negotiated how the group could be represented in the film spanning all aspects of styling and choreography of movement. A female music producer also worked intimately with the group to create the music for the dance performance. This collaboration evolved into a shared endeavour for girls and young women to be seen, heard, and valued by their community, with a genuine emphasis on the views and hopes of Mix Dancers.

Råslätt is notable for its concrete-block buildings designed by architect Lars Stalin, which were built between 1967–1972 during the Swedish government’s ambitious Million Programme.(2) The neighbourhood was built around a centre comprising schools, sports fields, a church, and other public services, informed by the then radical thinking prevalent in town planning around the perceived needs of neighbourhoods. In the 1980s, the brutalist architecture was ‘softened’ by artists Jon Pärson and Lennart Joanson, who painted 80,000 square metres of building surface with pastel colours. Despite efforts to improve the quality of the environment, like many other estates established in the same period, plans for public spaces prioritised male activity and a narrow conception of ‘sport’, leading to a predominance of sporting arenas. Dance, on the other hand, has been viewed as culture, and as such was ignored by funding streams accessible for sport.

Seen locally as a success story, Mix Dancers have been heralded by politicians and local press. However, despite Mix Dancers’ important role as members and role models of their community, the group’s activities are still being run on a voluntary basis from a rented basement. Seeking to unpick the mechanics of how these conditions are shaped by the larger geographical and architectural forces at hand, Billing and Mix Dancers harnessed the colour purple and the material of glass as the work’s leitmotif, making visible the complexity and vulnerability of Mix Dancers’ position. In Purple further articulates the ambivalent place that the group find themselves in – between positive action for themselves and the community, and the ‘value’ they provide for political media gain, on the one hand, and the lack of pay and provision of security for their organisation, on the other.

The panes of glass carried by Mix Dancers replicate the dimensions of the windows of Råslätt’s recreational centre — where their studio is located in the basement — while the purple hue references their studio walls. As the panes are moved, they capture and echo the pink, green, and purple from the surrounding concrete facades, negotiating the relationship between person and place. The camera’s lens places everything on an equal footing: gesture, environment, movement, and architectural motifs form one unified experience. As with Billing’s previous films, sound and music play a crucial role. Here, the group’s activity is accompanied by the sounds of birds, maintenance vehicles, a lawn mower, and music composed for the film, including the arpeggiated glass-like sounds of the keyboard and voice that accompany the procession, adding both materiality and movement.

(1) Art is Happening, a project that invited artists to make public artwork in Sweden engaging with late Modernist housing structures built between 1965–1974. Art is Happening was based on a dialogue and collaboration and sought to emphasise the needs and desires of local residents to be characterised by participation by representatives from a wide range of organisations.
(2) In Sweden a major concept in housing was to build away from the city centre, separating cars from blocks of flats so they could be closer to nature. These large-scale neighbourhoods were erected quickly and cost effectively, delivering ‘good value’ as well as the promise of egalitarian social principles. Societal functions were also separated out so that housing, work and utilities would operate in their own space. From today’s perspective this division is seen to have led to isolation, segregation and stigmatisation.