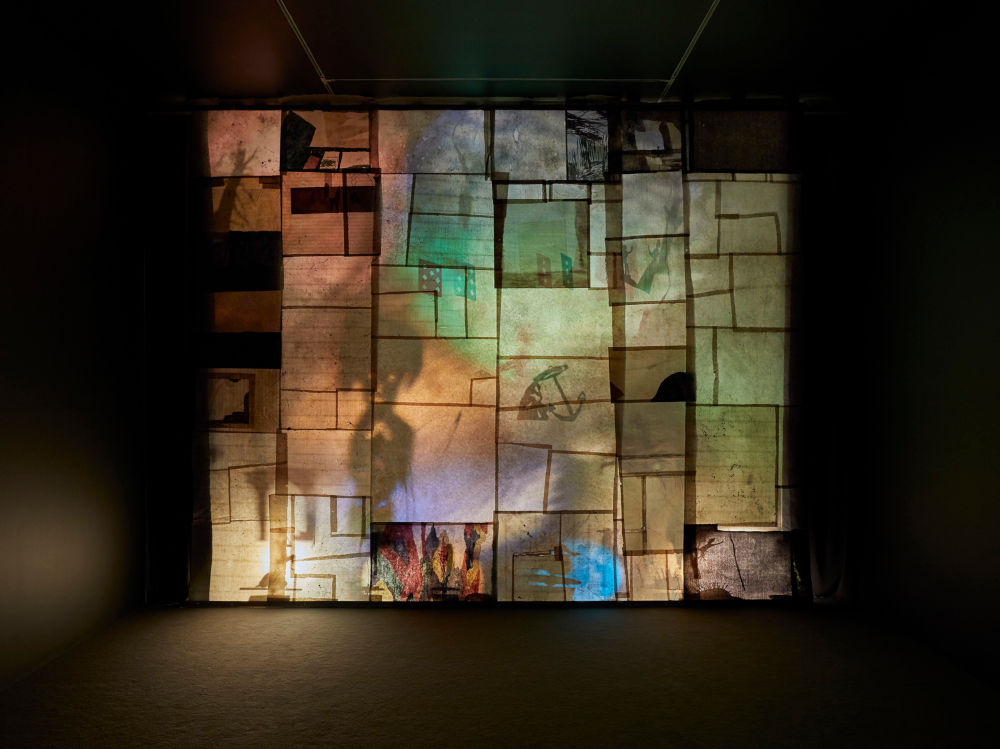 For this, Nordström’s seventh solo exhibition with the gallery, the artist debuts a new large-scale immersive environment, which is installed on the gallery’s first floor. The presentation also includes a range of the artist’s recent drawings and collages.

A new facet of the artist’s practice, Nordström’s spatially and visually immersive environments reimagine the imagery and forms in his collages and drawings within a dynamic sculptural and proto-cinematic tableau. At once intimate, evocative, and meditative, the new environment—the first to be presented in a gallery—will be encountered by viewers through a veil composed of semitransparent paper (in fact, the same paper used to create his collages); behind which cutouts of buildings, trees, and animal and human forms are suspended between the ceiling and floor by rotating wire mobiles that are illuminated by colour wheels, animating the paper’s surface in a whimsical play of light and shadow. The work conjures associations with various traditions of shadow puppetry, practiced by many cultures around the world for millennia, as well as children’s shadow play and contemporary avant-garde theater.

A musical element—a ‘collaged’ composition of found and new sounds recorded in collaboration with the music producer Rudolf Nordström, the artist’s son—lends another dramatic dimension to the overall work. From the ground floor, where the collages and drawings are presented, visitors will be able to hear the musical composition above, further connecting the imagery within the two spaces. Entering the first-floor galleries, audiences will have two ways of experiencing the environment. Proceeding to the front of the space offers a view of the screenlike veil upon which shadow, light, and imagery are projected. Visitors are also encouraged to view the work from the back of the space and observe the materials and mechanics of the enveloping sculptural display. Much like the artist’s collages, where the appearance of imagery is self-evidently linked to the process of their construction, this format lays bare the relationship between the artist’s assembly of his materials and the projections on the paper screen. Taken together, the result, as curator Andrea Andersson notes, is ‘part fantasy, part dream, and entirely analog. It’s a work out of time or place.’(1)

The new graphite drawings and watercolour collages included in the exhibition expand on the motifs and imaginative spirit that have come to define Nordström’s broader oeuvre. Each work is populated by a cast of anonymous figures whose relationships and identities are never fully revealed. Nordström cuts out and paints the individual humans and animals he uses in the collages separately from one another, later bringing them together within the composition in surprising, humorous, and mysterious ways. In Farväl/Farewell, for example, figures can be seen engaging in a variety of discrete actions. A large cat scratches another figure’s back. Naked and seminude characters are crouched and bent over in compromising or suggestive positions. Others appear to be singing and dancing for their own pleasure, unaware of the actions of those around them.

As with the collages, Nordström’s graphite drawings often feature characters in antiquated attire going about their daily routines. The scenes unfold across domestic interiors, public spaces, municipal buildings, and art galleries, among other locales. The depictions appear like discrete vignettes, yet they are rife with detail and nuance, suggesting larger narratives and events that previously occurred or that are unfolding outside of the frame. In Över sten och trapp/Over stone and steps, a man lies at the foot of some stairs between two standing figures. Yet the relationship between the three is ambiguous. Did the adjacent figure push the man to the ground? Or are they friends, stumbling home from a night out together? Likewise, in another drawing, Förändringen/The Change, two men in top hats stand in what appears to be a construction site. There are no workers around, and despite the two figures’ formal attire, it remains unclear whether they are business partners or merely two unrelated passersby. As Katarina Wadstein Macleod notes, ‘[Nordström’s] pictorial worlds … form a parallel universe that is seemingly recognisable; visually similar to our own, but governed by other rules, like a dream.’(2)

Several of the works on view also incorporate photographic elements, specifically, cutouts of heads that float like celestial orbs within the compositions. Culled from magazines, as well as books from the artist’s personal library, these cropped portraits and body parts are separated from their original sources and contexts and reconstituted as Dada-esque photomontages. In works such as Historien and Pedagogik/Pedagogy, fragmented heads are isolated yet full of expression and character, making the interrelation of the imagery humorous but also cryptic.

Together, the environment, drawings, and collages in The Anchor Hits the Sandoffer a unique opportunity to view the full breadth and ingenuity of Nordström’s singular style and approach to art-making.

Jockum Nordströmwas born in 1963 in Stockholm, where he continues to live and work. He created the works for The Anchor Hits the Sand while at his secluded studio in Götland.

In 2018 Why Is Everything a Rag, which featured the artist’s first immersive environment, was presented at the Contemporary Arts Center, New Orleans. In 2013 he had a major European survey, All I Have Learned and Forgotten Again, which was on view at Lille Métropole, musée d’art moderne, d’art contemporain et d’art brut in Villeneuve d’Ascq, France, before it travelled to the Camden Arts Centre in London, making it the first solo exhibition of his work in the city. Other solo shows include those organised by the Centre Georges Pompidou, Paris (2012); Institut Suédois, Paris (2011); The Douglas Hyde Gallery, Dublin (2010); and Moderna Museet, Stockholm (2005).

The artist would like to give special thanks to Johan Nordbeck, Julien Bismuth, and Georg Barber.