Perrotin New York presents Corporealités, a new large-scale sculptural installation by Danish artist Jesper Just. The new work is composed of a series of LED sculptures programmed with a new multi-channel video work alongside a spatial intervention into the gallery’s first floor. 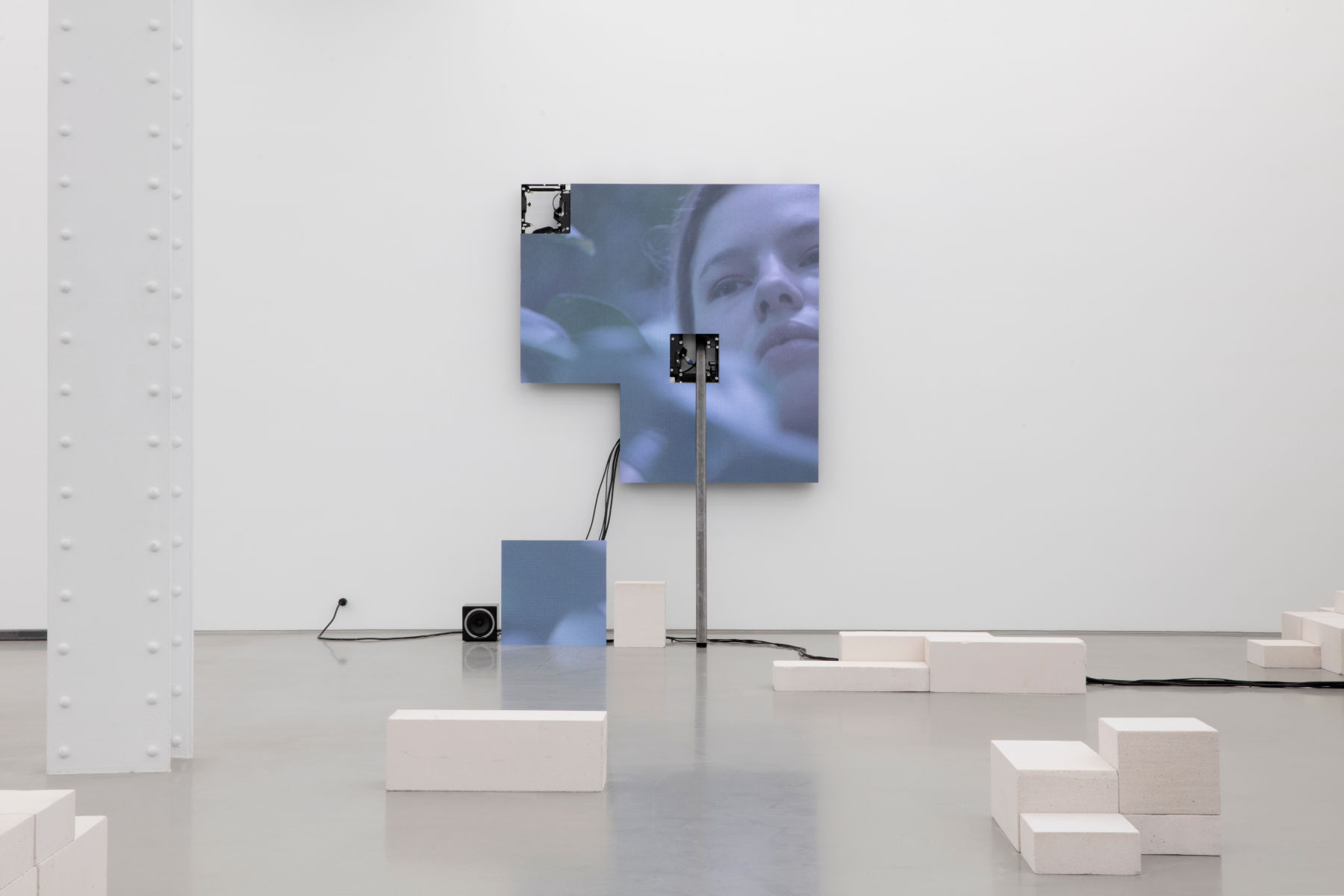 In Jesper Just’s early work, beginning in the late 1990s, the artist produced exactingly stylized nonnarrative films. These first films were marked not only by a mastery of the formal aesthetics of cinema but also through a questioning of its power. Loneliness, suspense and yearning are impactful yet familiar devices of Hollywood cinema, often employed by Just to upend the film-watching experience. In this new installation, Just explores ideas of agency, performativity, and interpassivity, frequently using the formal language of ballet to discuss the body in both its idealized and fractured forms.

Central to the exhibition is a new video work, programmed across a series of sculptural panels. For this new multi- channel work, Just collaborated with a set of dancers from American Ballet Theater. The camera’s intimate gaze focuses on close-ups and parts of bodies — the blink of an eye, a flexed pelvic muscle, hairs standing on end atop a dancer’s forearm. Their supple and muscled bodies, even in passivity, indicate power. Yet they are fractured and disjointed, displayed across a series of five fragmented LED panels. Lying in repose, there are small patches affixed to their musculature, which cause mild and intermittent muscle contractions. Oftentimes used by dancers for physical therapy and strength training, each patch is connected to wires that cascade down the dancer’s bodies and across the floor. As their muscles continue to contract, the notes of Fauré’s Op. 50, a masterpiece in the Romantic style, sound throughout the gallery. It is difficult to discern whether the dancers’ movements are dictating the score, or if it is the other way around. Like parts of a self-contained machine, they are simultaneously autonomous and passive.

Just’s immersive video installation is punctuated with a series of physical and sensory elements that force viewers to re-orient themselves within their spatial surroundings. The space inside the exhibition mirrors the space inside the performance, creating an uncanny doubling effect throughout the exhibition. Yet, something appears amiss: various panels are freestanding, others are hung on the wall, yet a few are precariously held up by beams of natural wood against the wall of the exhibition space. The panels are fragmented, not unlike a crumbling fresco, and the white wall punctuates their smooth, electronic surfaces. The haphazard arrangement of the panels force participants to create unexpected and illogical pathways as they circumnavigate the space. As the architecture of the exhibition space is rearranged, so too is its hierarchy. What supports and what enhances? The dancers overlap and intertwine, intermittently observed through a microscopic camera lens. The extreme zoom of the lens renders genders and identity ambiguous, while the fractured screens mirror the fractured bodies, forging a tangible connection across physical and digital spaces.

Corporealités was produced by Perrotin and Anna Lena Films. We would like to give thanks for the muscial score arranged by August Rosenbaum and performances by dancers from the American Ballet Theater: Joo Won Ahn, Sierra Armstrong, Skylar Brandt, Connor Holloway, Courtney Lavine, Alban Lendorf, and Jin Zhang.