Selected Facets and Translation is a presentation of a range of works created by Jeremy Shaw that can be conceived as physical manifestations of his recent immersive and cinematic installations. 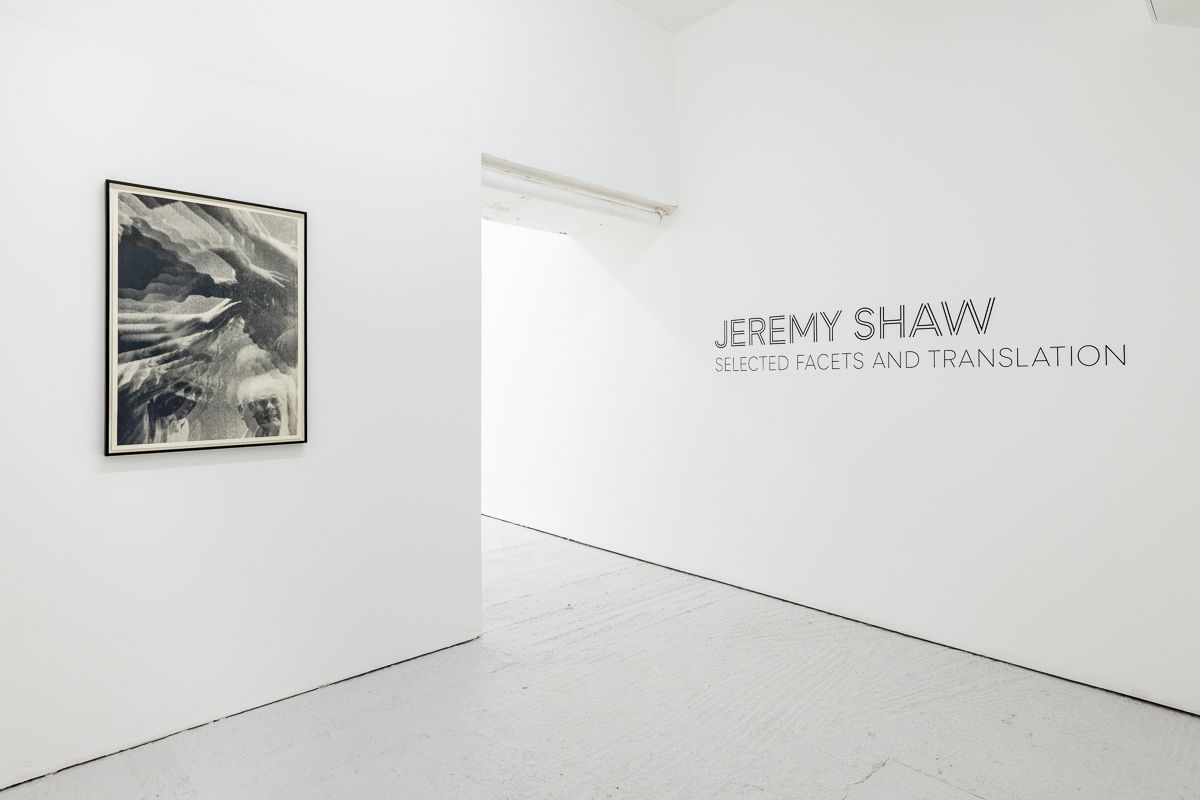 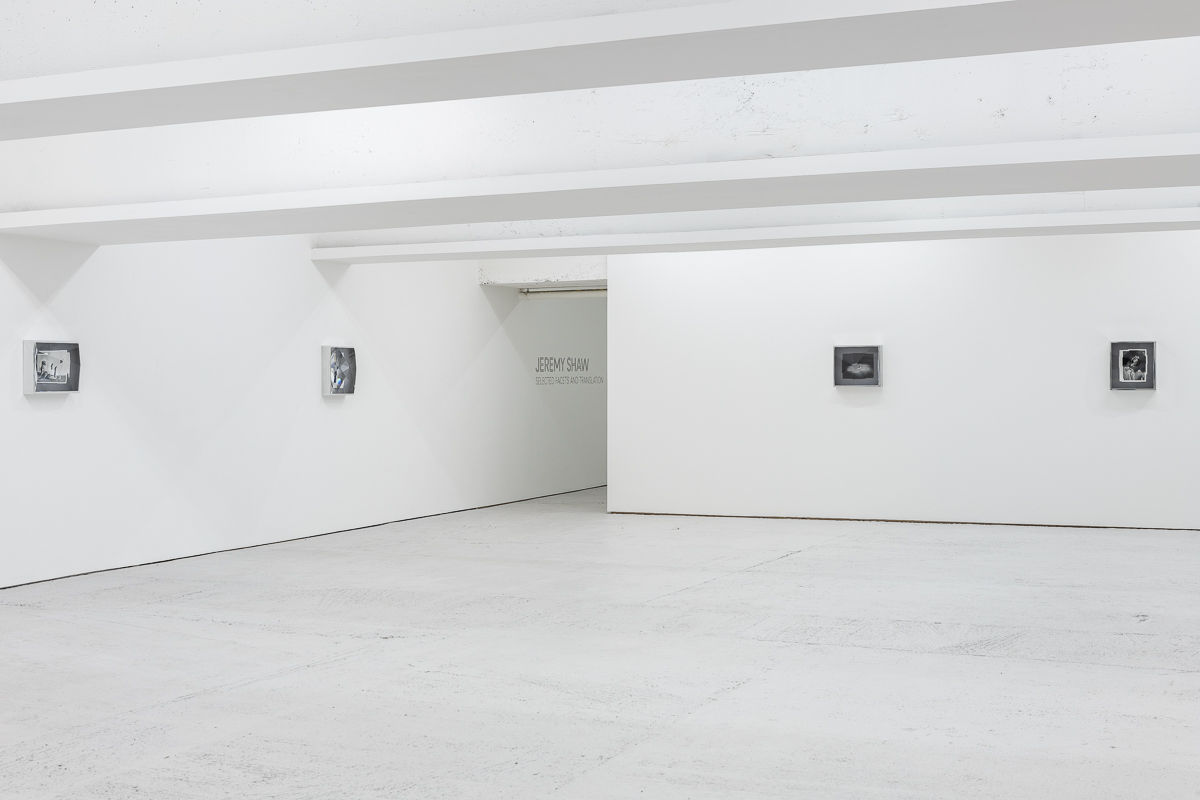 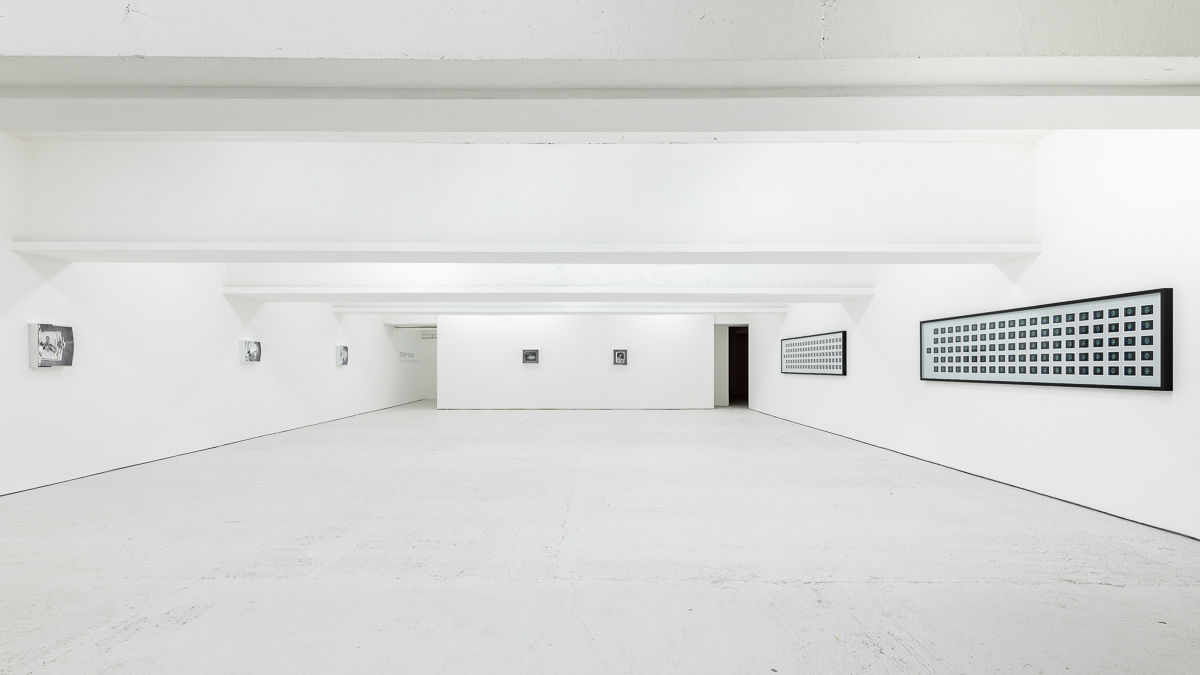 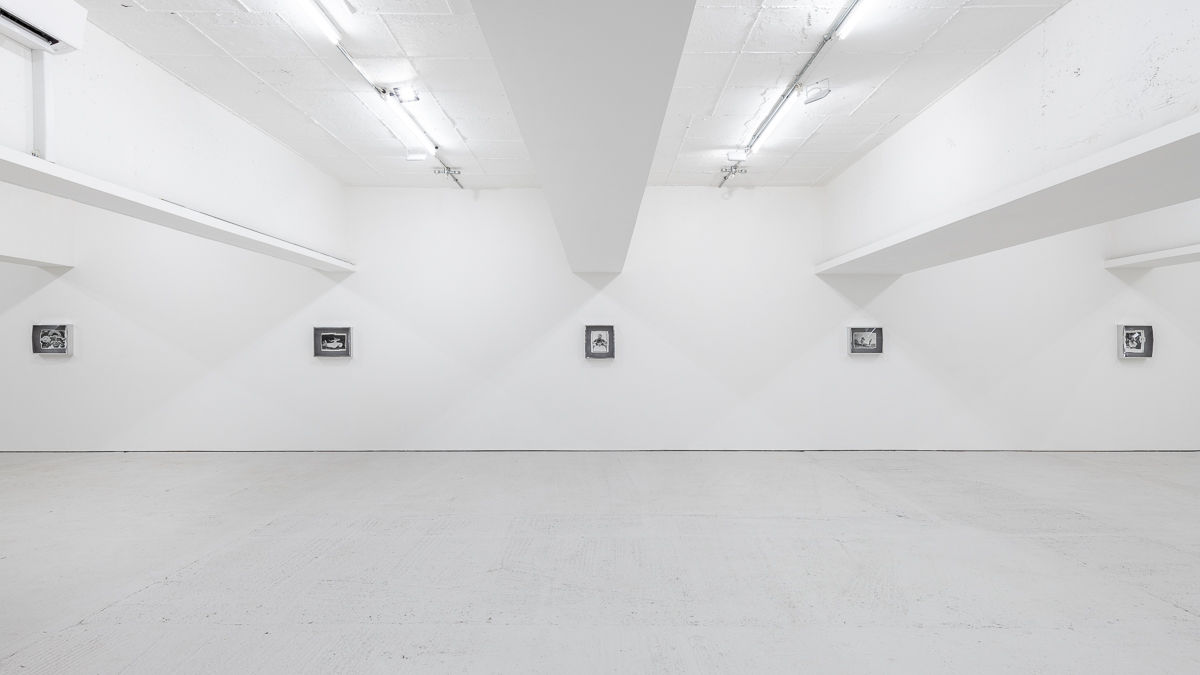 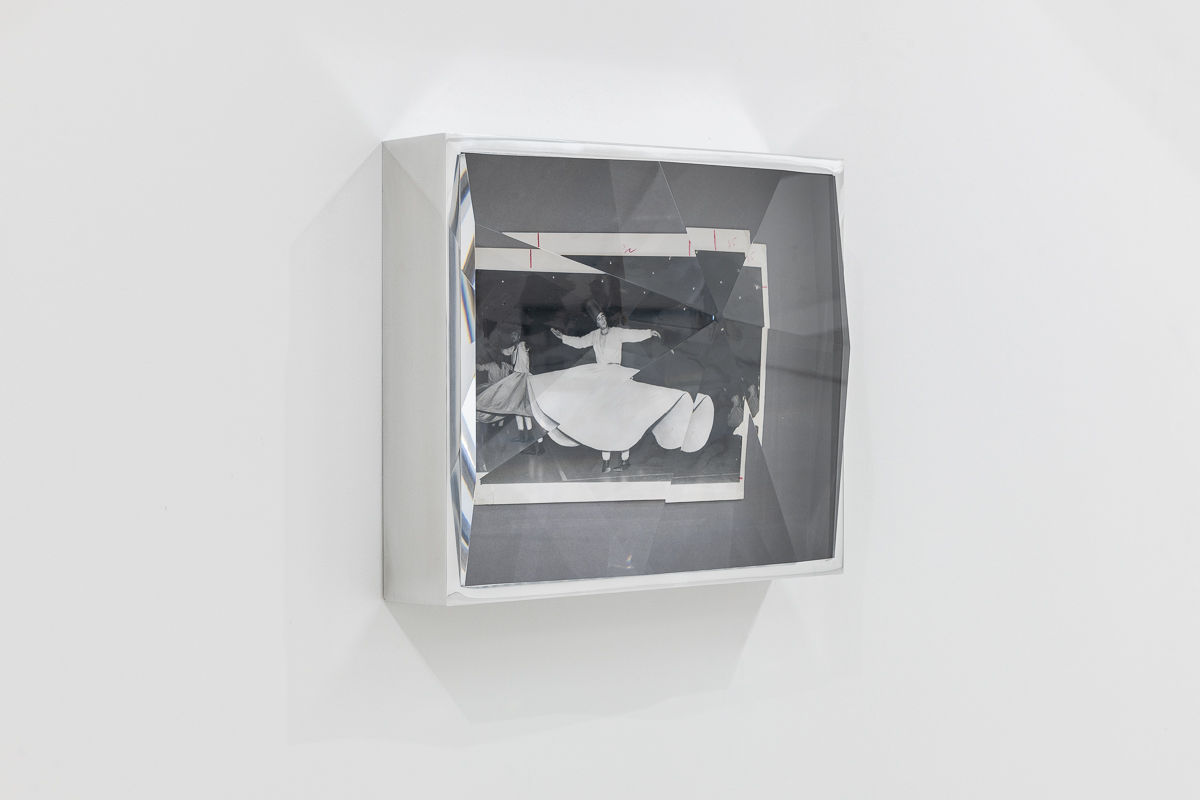 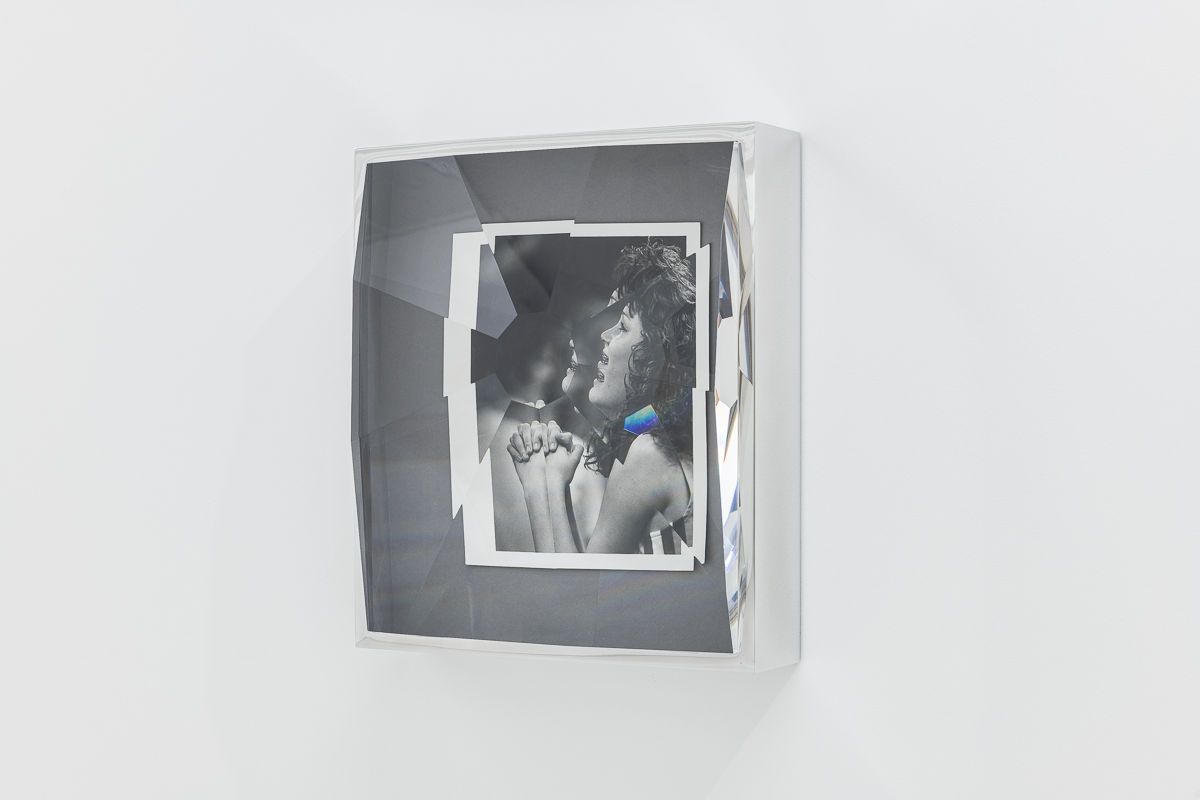 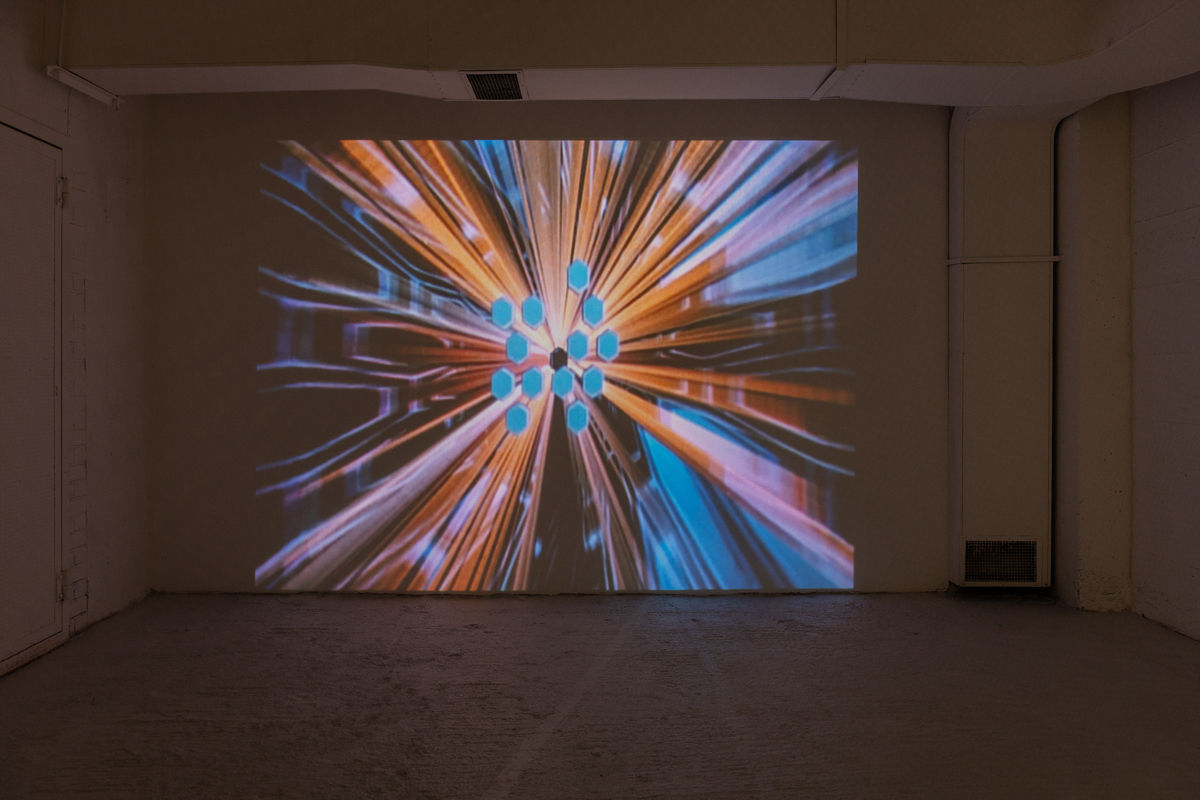 The exhibition allows a glimpse into some of the key thought processes that inform the artist’s overall practice. Shaw’s practice is an in-depth exploration of the conditions of mediation in relation to spiritual, religious and subcultural ideologies, notions of enlightenment, scientific data visualization of the brain, altered states of consciousness, psychedelic experimentation, and the desire to search out meaning beyond what is currently acceptable as it appears in cultural forms of expression. The works have a timeless quality – they continually address the shifting present context from which the viewer approaches them. Shaw’s artistic position is unique: his work is both critical and socially engaged, speculative and embodied, conceptual and affective. There is a caution and scepticism in Shaw’s belief.

Illustrated Rapture Catalogue (Laying of the Hands) greets the viewer upon entering the gallery. The silk-screen is one of a series of images chosen from numerous documentary sources that depict subjects in a state of rapture. The original photographs have been refracted in-camera through a piece of kaleidoscope in the process of reshooting. The mediation of historical images by analog means (no digital manipulation or output) further obscures the date of production and flattens the images, allowing them to haunt the present from an uncanny dimension. Reproduced in a medium that is effective for wide distribution, the disparate subjects depicted herein now circulate in a disembodied form as though in accordance with the represented desires for a seemingly universal transcendence.

Presented across two walls in the main exhibition space one finds Towards Universal Pattern Recognition – an ongoing series of archival photographs that feature subjects experiencing states of spiritual, hedonistic or technological ecstasy. The photographs are framed under precisely faceted picture lenses, designed by the artist to create multiple refracted images of a specific element within the photo. This mediation of the presented image not only appears to approximate the altered state of consciousness of the photographic subject(s), it heightens an awareness of the perspectives of the camera, the beliefs or values of the original photographer and the viewer of the artwork; they are brought into relation around the very notion of capture, witnessing, authenticity and representability.

Sharing the main space is a quasi-experimental work in which Shaw becomes the subject of a scientific apparatus. In the Aesthetic Capacity series, the artist employs the obscure form of Kirlian photography to record experiments using himself as the basis for testing the visual effects of music. Discovered in 1939 by Russian inventor Semyon Kirlian, and still used in fringe science and mystical practices, it is a contact-based darkroom process used to capture the phenomenon of electrical coronal discharges that naturally occur around objects – considered by some to be their aura. Shaw listened to specific music on headphones and at a certain point in each song placed his finger on Polaroid land-film while charging it with a bolt of electricity. In the exhibited works, Shaw employed Billboard Hot 100 charts – the definitive list of a single year in American pop music – as the basis for his experiments. The resulting images capture the interplay of music, body and presence.

Installed in the back viewing room is the video work, This Transition Will Never End; a visual archive of footage taken from a wide variety of movies and television series in which the trope of a vortex is used to represent the undocumentable slippage of time or transition from one ‘reality’ or state of consciousness to another. Presenting one vortex after another, Shaw’s catalogue of this phenomenon ranges from low budget movies to Oscar-winning Hollywood films and takes viewers on an unending trip through a history of special effects from physical constructions (The Time Tunnel, 1958) through to split-screen animation (2001, 1968), early computer graphics (Tron, 1982) to highly advanced CGI (Enter the Void, 2008). The work underscores the curious agreement in representing this experience.

Ominously alone in the former car lift hangs Degenerative Imaging, one of a series of glow-in-the-dark, vinyl on metal, wall works that recall children’s astronomy stickers. Originally used both for educational purposes and at one time, popular with teenagers experimenting with psychedelic drugs, Shaw’s source material comes from 3D SPECT scan renderings that represent the degenerative effects of long-term substance use on the human brain. The visual language of neuroscience, often used in health and pharmaceutical advertising, functions here as horror-propaganda: the holes represent lack of blood flow and not necessarily brain deterioration.

Jeremy Shaw (Canadian, b. 1977) works in a variety of media to explore altered states and the cultural and scientific practices that aspire to map transcendental experience. His films, sculptures and installations have been exhibited extensively around the world including solo exhibitions at Centre Georges Pompidou, FR, MoMA PS1, US, Schinkel Pavillon, DE, and MOCA, CA, and have been included in international surveys such as the 57th Venice Biennale and Manifesta 11, CH. In 2018, Shaw was awarded a residency at the Hammer Museum, US, and was the winner of the 2016 Sobey Art Award. Works by Shaw are held in numerous public collections worldwide including the Museum of Modern Art, NY, Tate Modern, UK, Centre Georges Pompidou, FR and The National Gallery of Canada.

Explore from the comfort of your own home - Jeremy Shaw: Selected Facets and Translation @koeniggalerie London a presentation of a range of works that can be conceived as physical manifestations of his recent immersive and cinematic installations click the link in our bio to view the exhibition in VR #360 #360art #360photo #VR #VirtualReality #JeremyShaw #königgalerie #London #gallery #exhibition #art #installationart #photography #abstract #geometry #contemporaryart #modernart #seemoreart #GalleriesNow #lifestyle #ID18041