Perrotin Hong Kong presents the second solo exhibition by Jens Fänge in Hong Kong since 2017, featuring a body of new paintings as part of greater mise-en-scene that transforms the gallery itself into a human-scale composition. 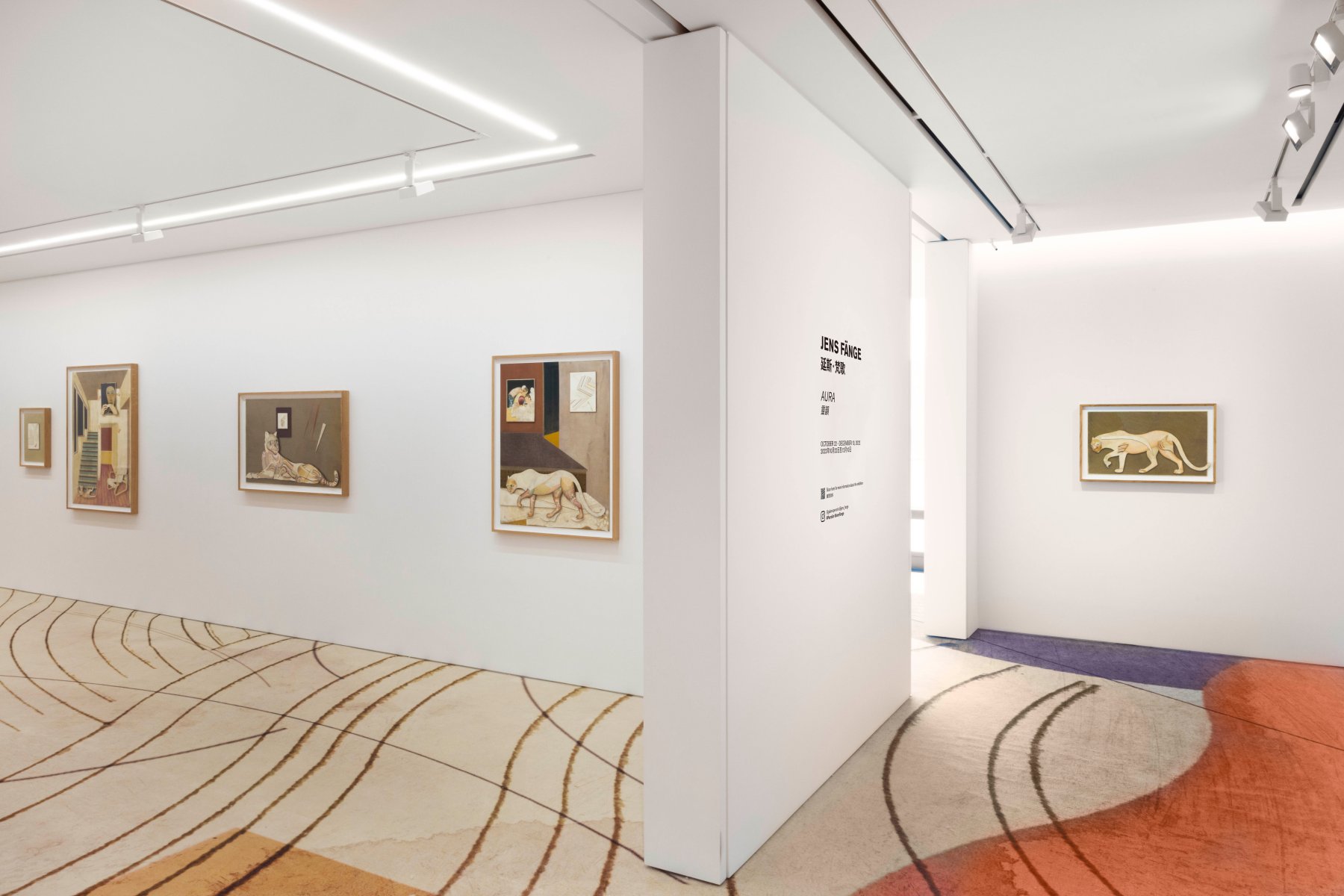 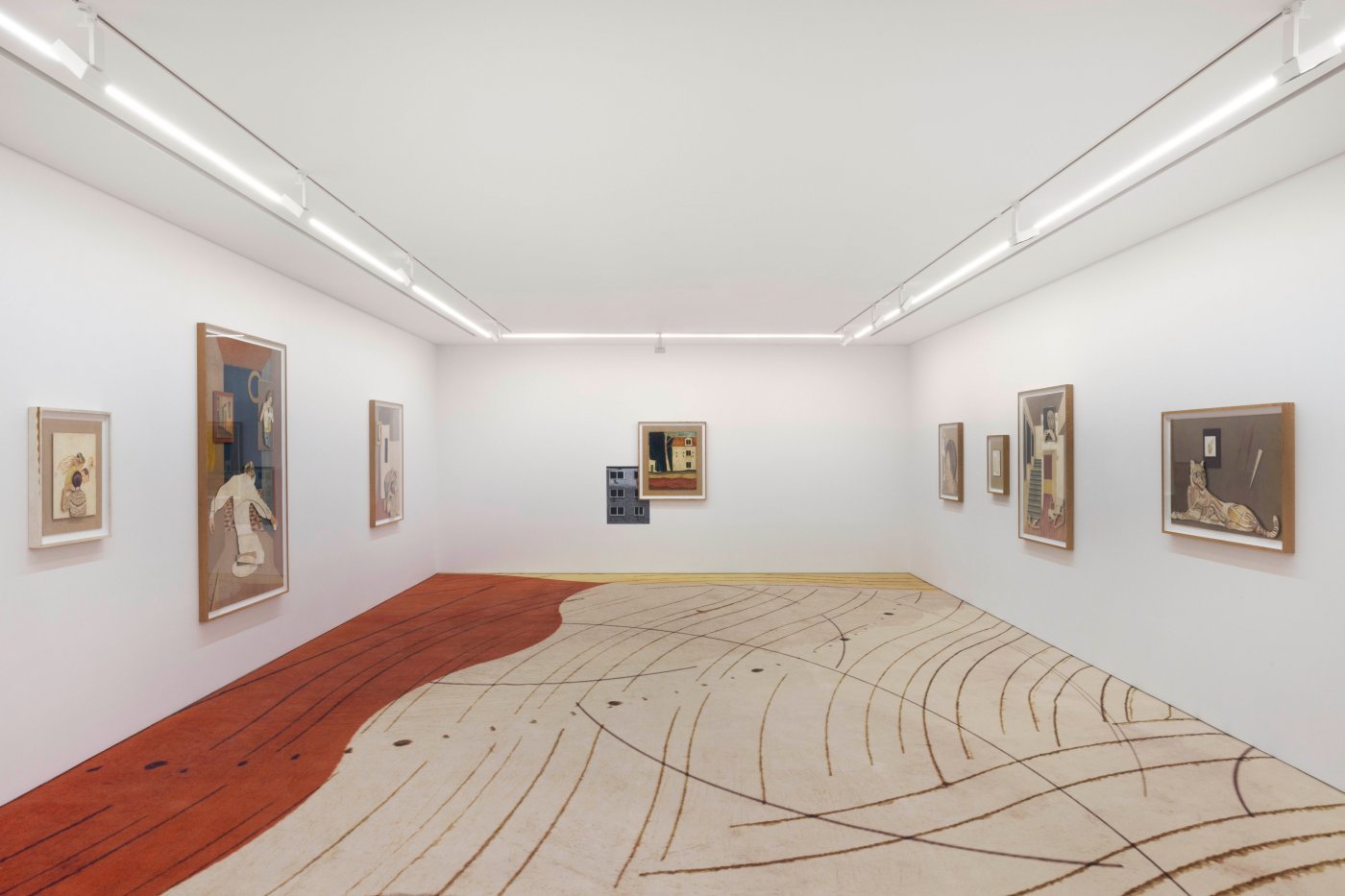 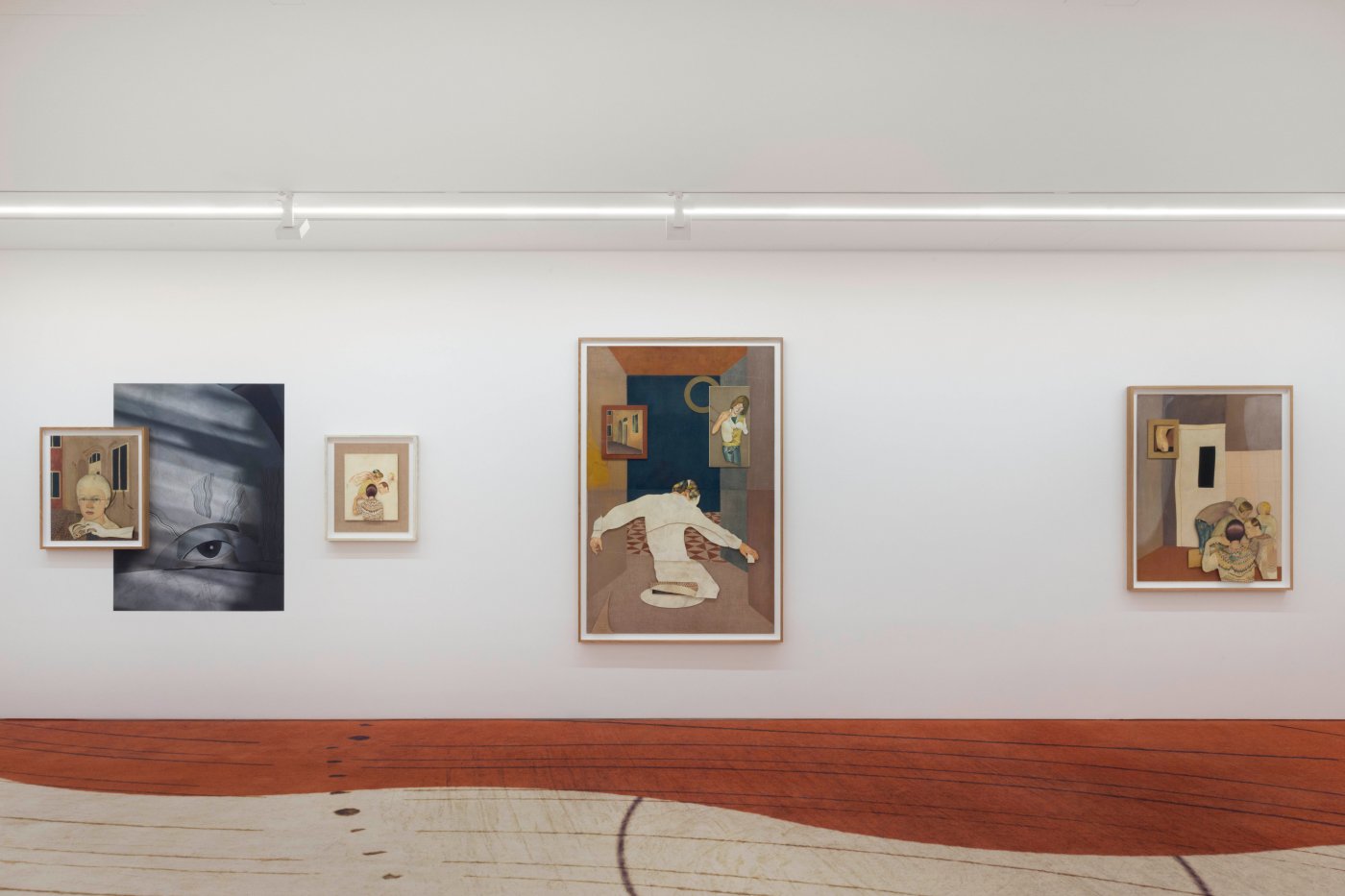 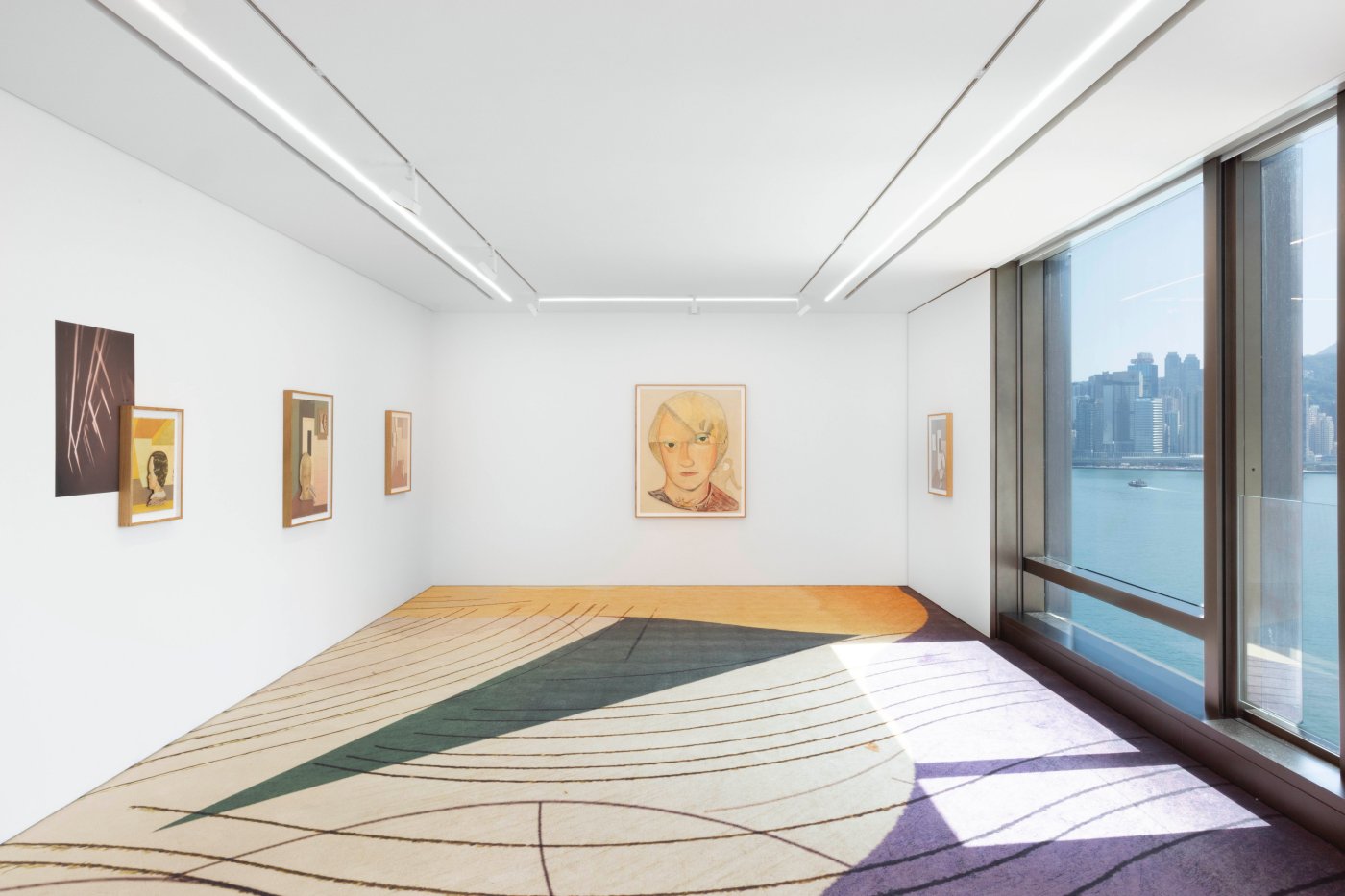 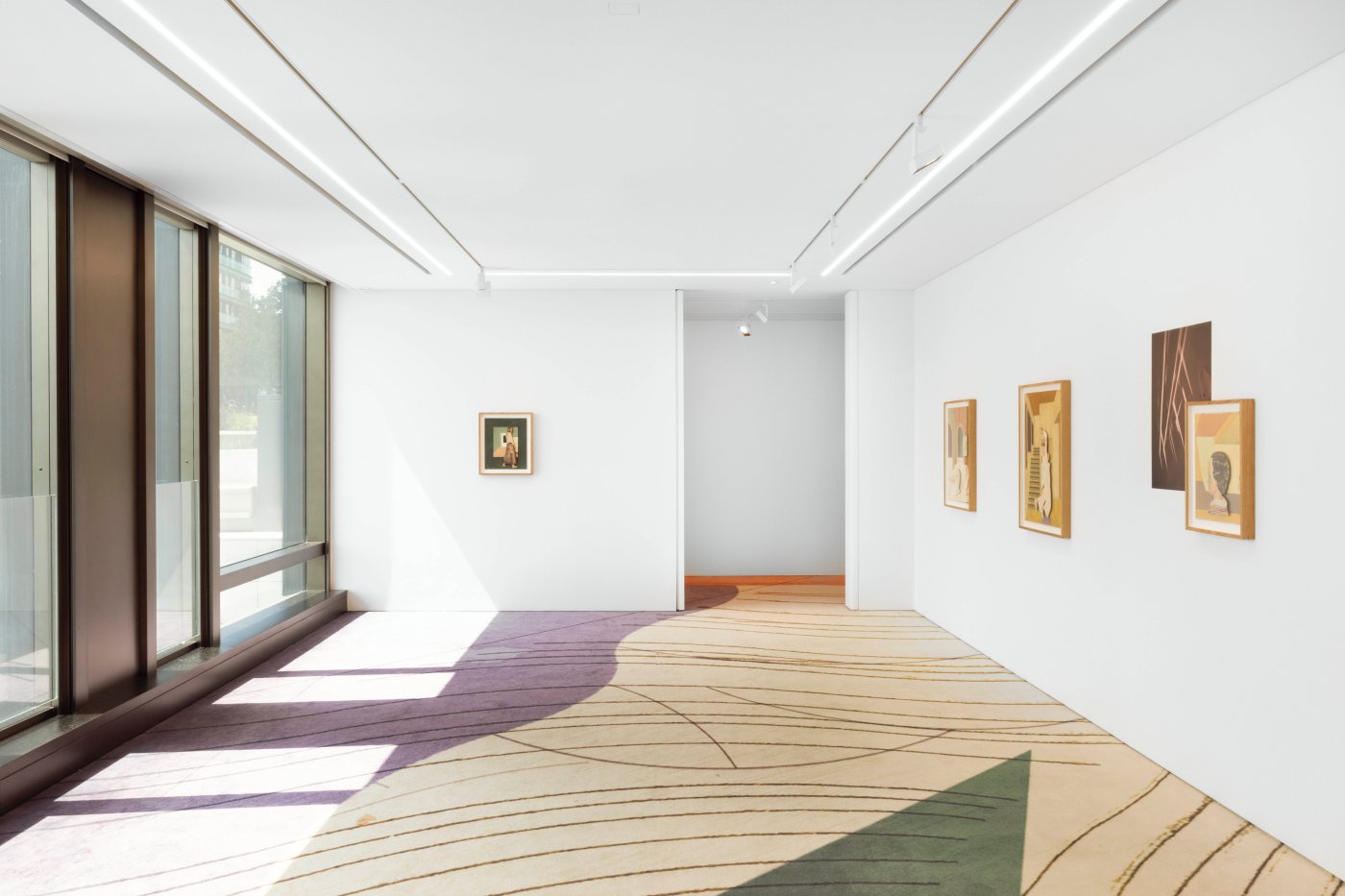 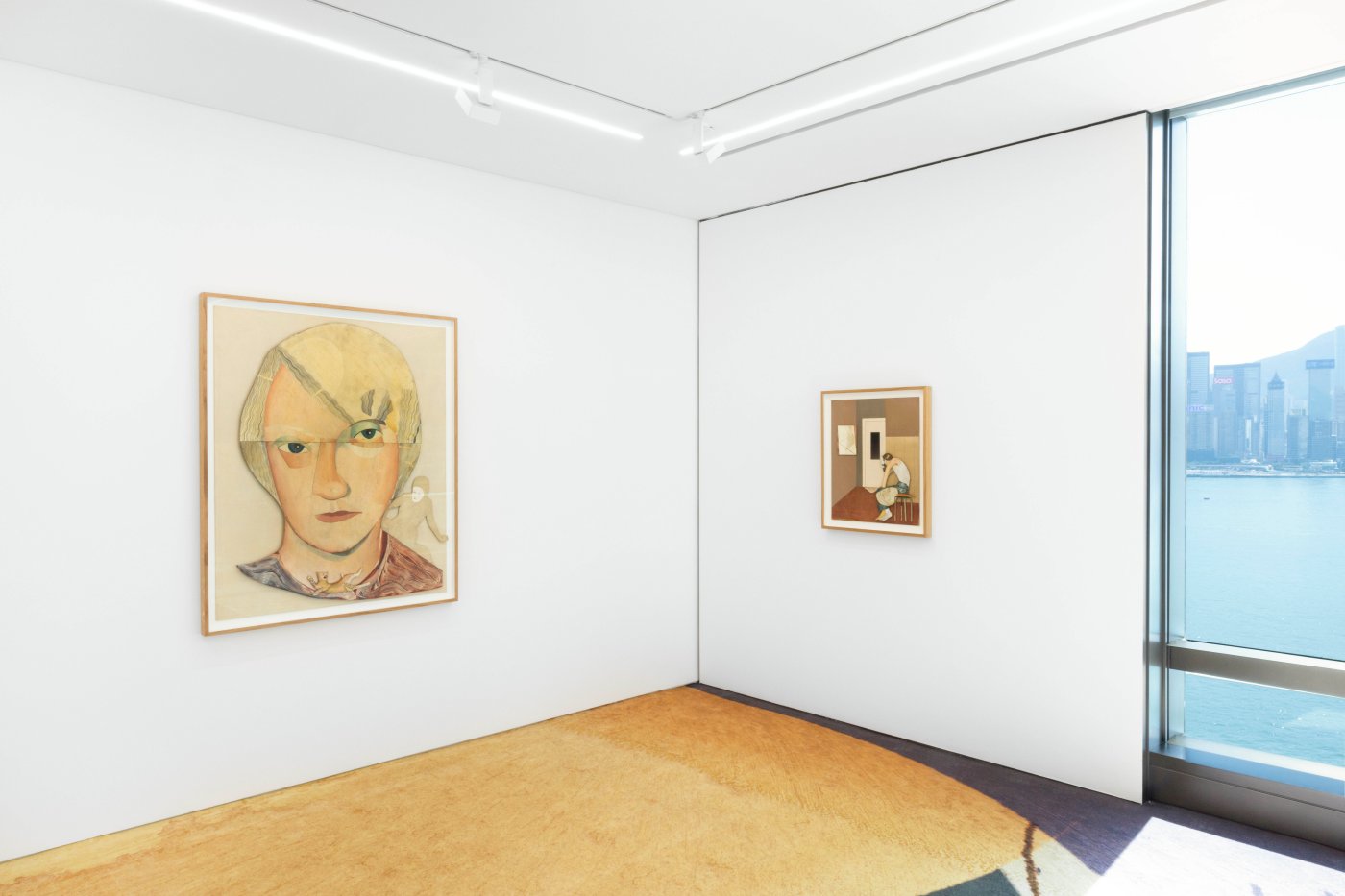 When Walter Benjamin wrote of art’s waning “aura” in his seminal 1935 essay, “The Work of Art in the Age of Mechanical Reproduction,” he was referring to the unique “presence in time and space” that is lost in the replicated image. In taking Benjamin’s concept as the title for his latest solo exhibition at Perrotin, Jens Fänge challenges his audience with a mind-bending conundrum: what does presence mean when time and space have no fixed reference point? What is the aura instantiated in his complex collages and assemblages, with their anachronisms and dizzying perspectives?

Often exploring the relations between people and architecture, Jens Fänge’s surreal compositions hint at profuse art historical influences, from the darkened archways of Giorgio de Chirico and the steely portraits of Tamara de Lempicka to Georges Braque’s faceted forms and Wassily Kandinsky’s colourful intersecting shapes. Yet Fänge seldom incorporates overt references, deferring instead to the vague and generic.

The illusion of depth is undone by collaging miniature paintings on card or copper over corner seams and doorways. Fänge occasionally adds contrast by conflating interior and exterior, for example by including a painting of a tree or a façade inside a cramped room.

Fänge’s cut-out characters intrude rather than inhabit, hovering like apparitions in stairwells and rooms, or opening stark voids amid densely patterned abstract backgrounds. Conversely, in works where the background has sparsely coloured sections, a painted arm or tufts of hair might come to the fore while the rest of the person dissipates into the blank wall or floor.

Still other works rely on incongruities in scale to estrange characters from their settings, shrinking a room or façade so the legs of the overlaid figures dangle beyond the edge of the space, as if they are walking in front of an artificial backdrop. More disconcerting is when the architecture is superimposed onto the figure, as in works where characters’ eyes are eerily occluded by small images of an alcove or basement steps.

Fänge collates various painted backgrounds, materials, and cut-outs on the floor of his Stockholm studio and experiments with different chimerical configurations. His process is one of motion and transmogrification, and it is this boundless dynamism that is imprinted upon his dioramas. There are no conceptual or narrative strictures here, only tangled associations for the beholder to unravel according to their own projections of narrative logic.

The works are enigmas even to the artist himself, a dissociation between the conscious and subconscious self that evokes what psychologist Kelly Bulkeley described as “the autonomous otherness of dreaming.”

The clearest sense of continuity stems from the recurrence of motifs. A room with an off-white door and tiled wall reappears with variations in palette, scale, and occupants. Near-identical people and animals populate multiple settings. These repetitions are like spatial-temporal footholds, allowing the viewer to organise the visual elements into a semi-coherent history in which people visit places, keep mementoes, and refurbish homes. Yet this is an unreliable history spun by conscious reasoning and subconscious instinct.

The intertextuality extends beyond the picture plane in Fänge’s exhibitions, where murals and custom carpets echo elements in the works. “Aura” features printed images of a façade photographed from the artist’s studio, but digitally altered so the windows are blacked out like the panes in a displayed painting of a house. The viewers are thus invited to step into the unfolding dramas of his mysterious mises-en-scène. If Fänge’s works can be said to exude a kind of aura, it is one structured not by the materiality of the aesthetic experience but by the unstable logic of a half-remembered dream, elusive even as it manifests before us.

Working at the intersection of the early-twentieth-century practice of collage and the ancient art of shadow play, Jens Fänge has developed a surrealistic matryoshka-like aesthetics that consists of assembling paintings within paintings. A master of eclecticism, he incorporates—so it seems—an entire hierarchy of genres into his composite works, juxtaposing iconic portraits, still lifes, domestic interiors, cityscapes, and landscapes with geometric abstractions, all of which he renders using a variety of media and materials, including oil paint, pencil, vinyl, cardboard, and fabric on panel. The contoured, often cut-out protagonists of the artist’s refined pictorial plays appear to be drifting into these overlapping stage-like layers of representations, giving rise to an intricate, seemingly endless maze of shifting perspectives, not only within each composition but also within each series as a whole.