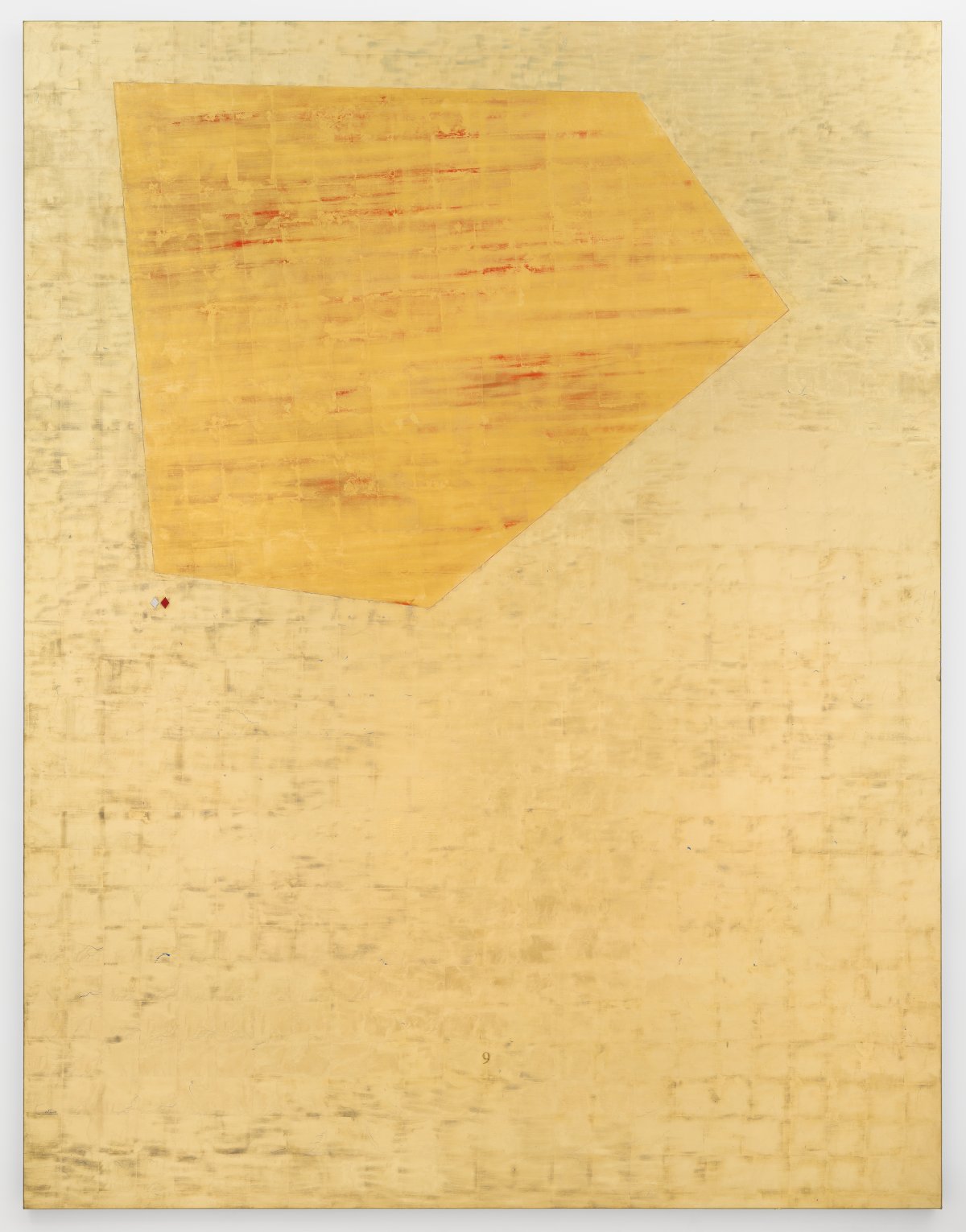 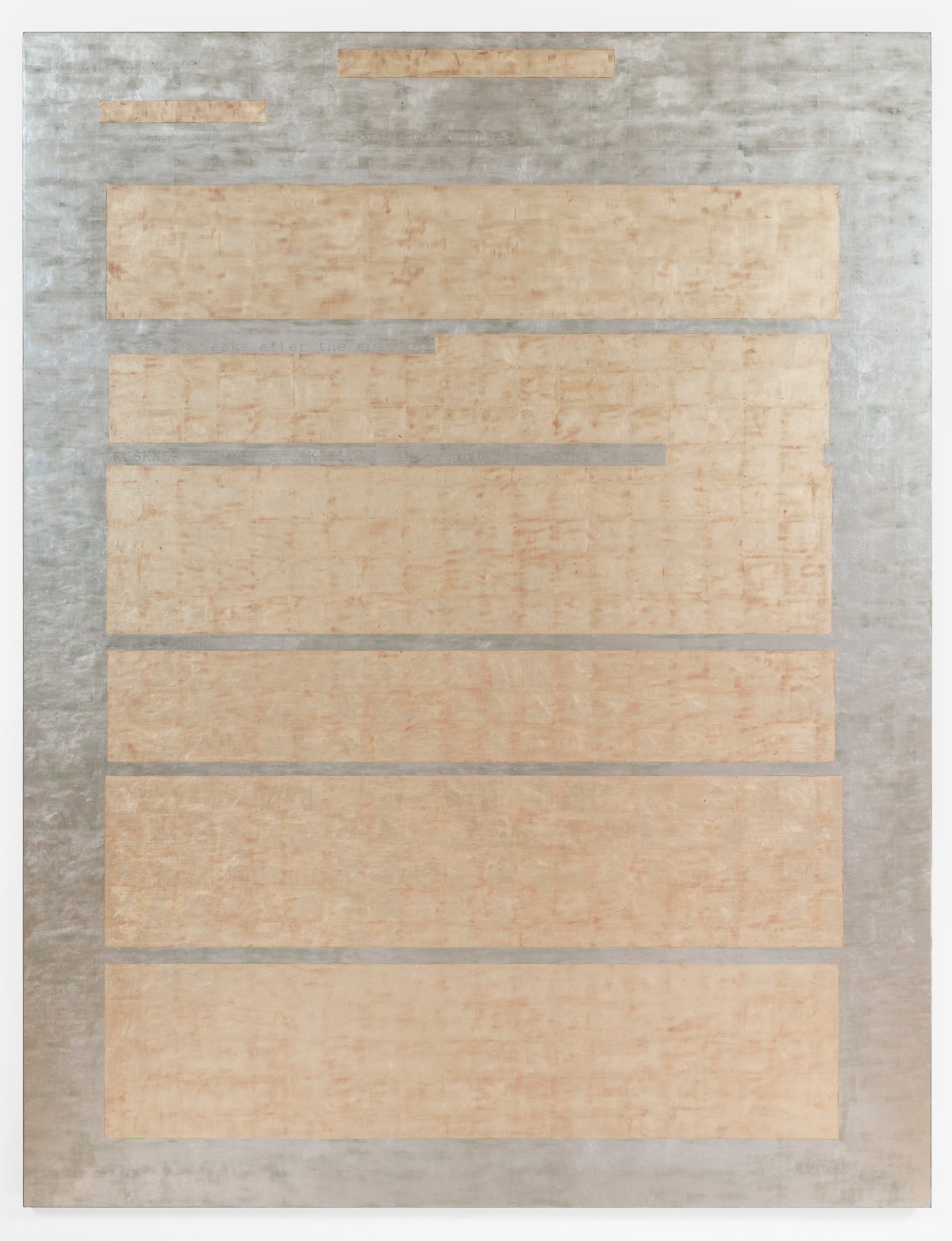 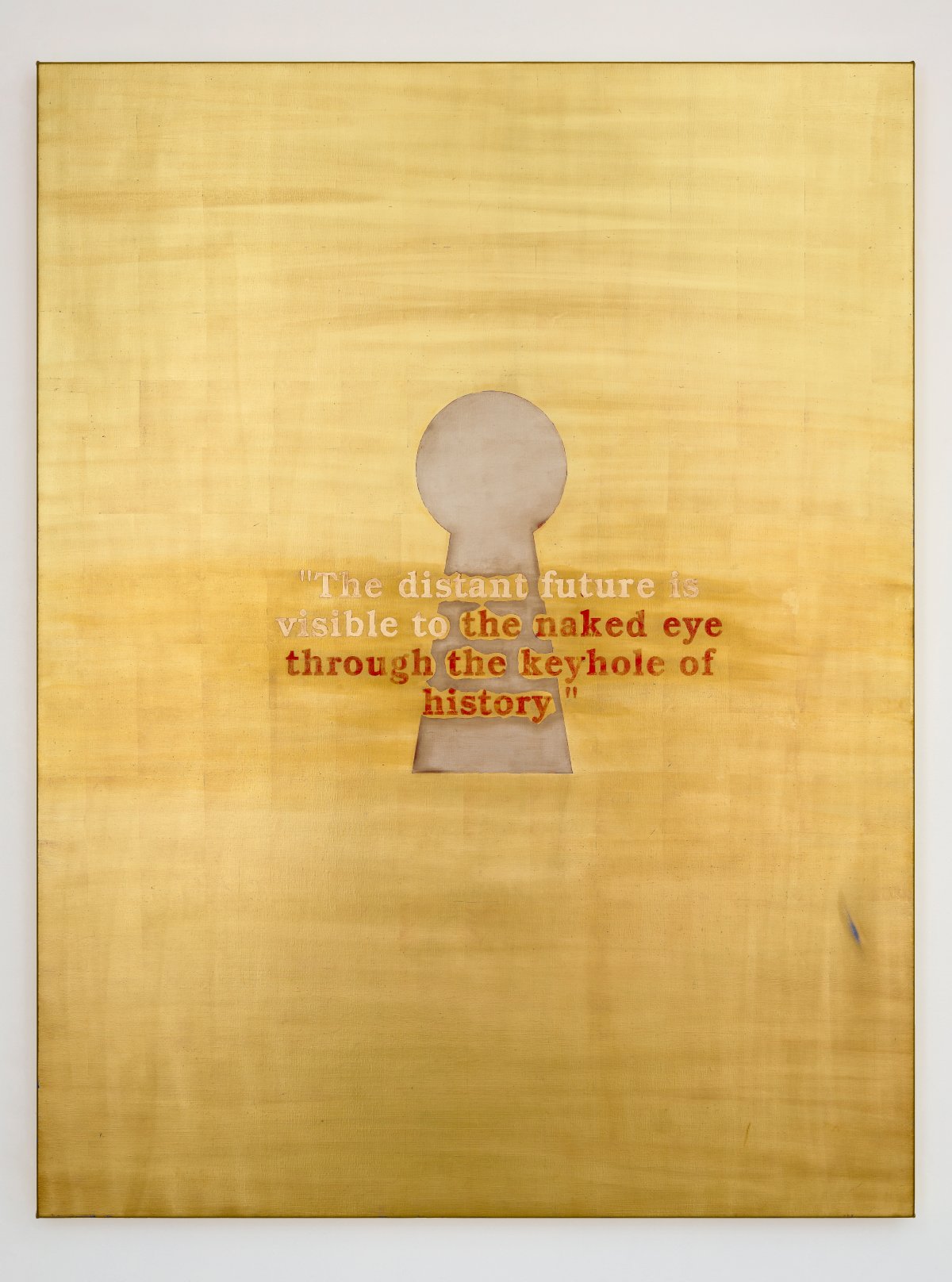 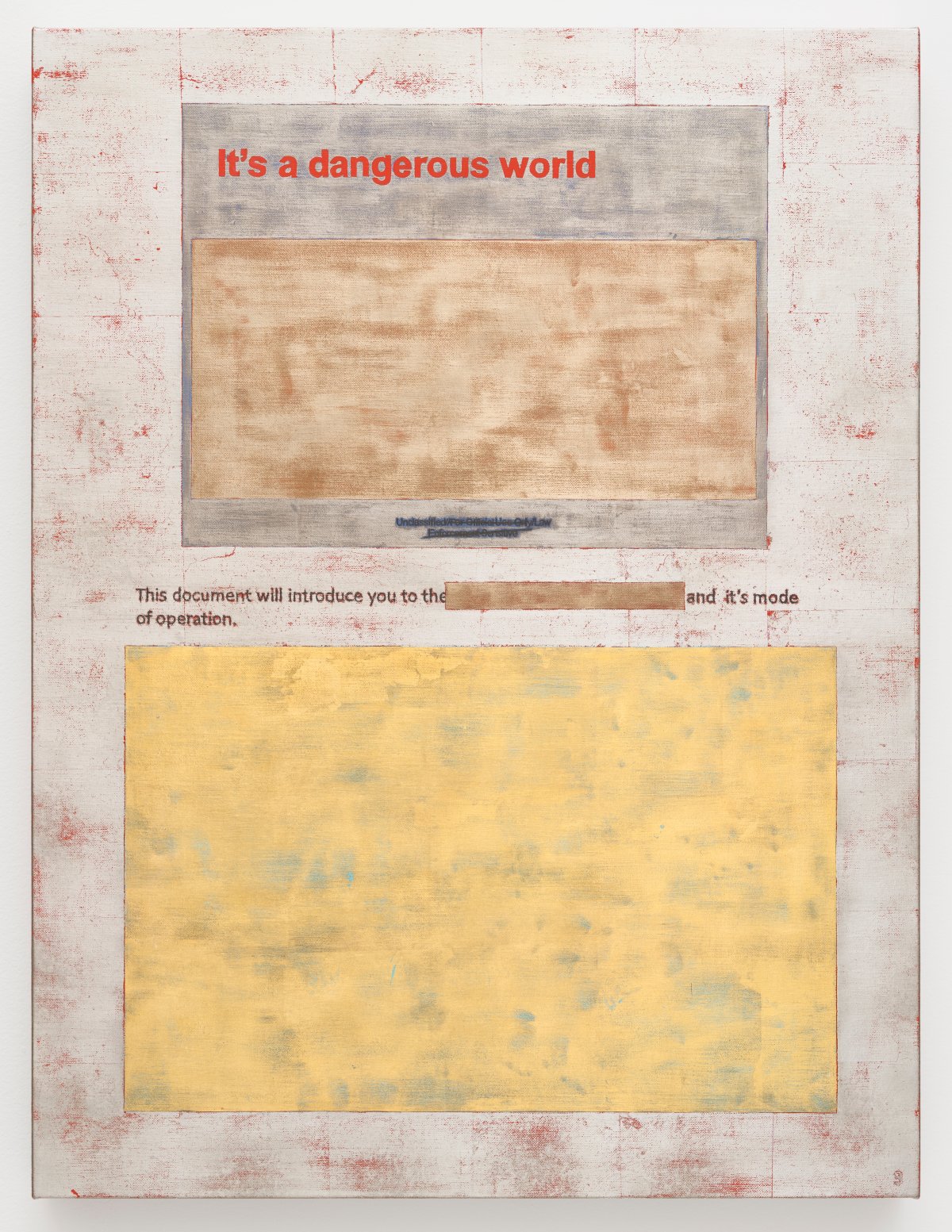 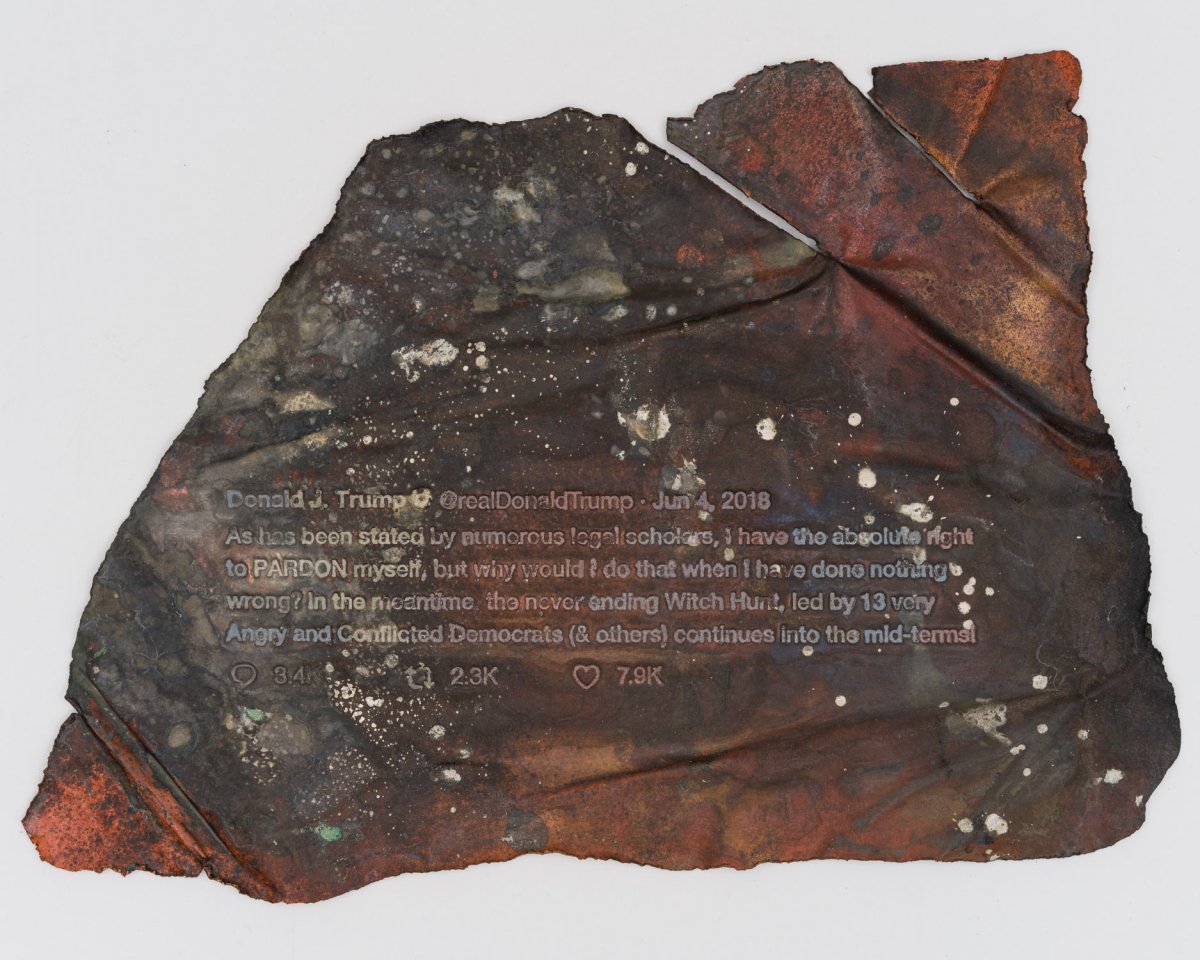 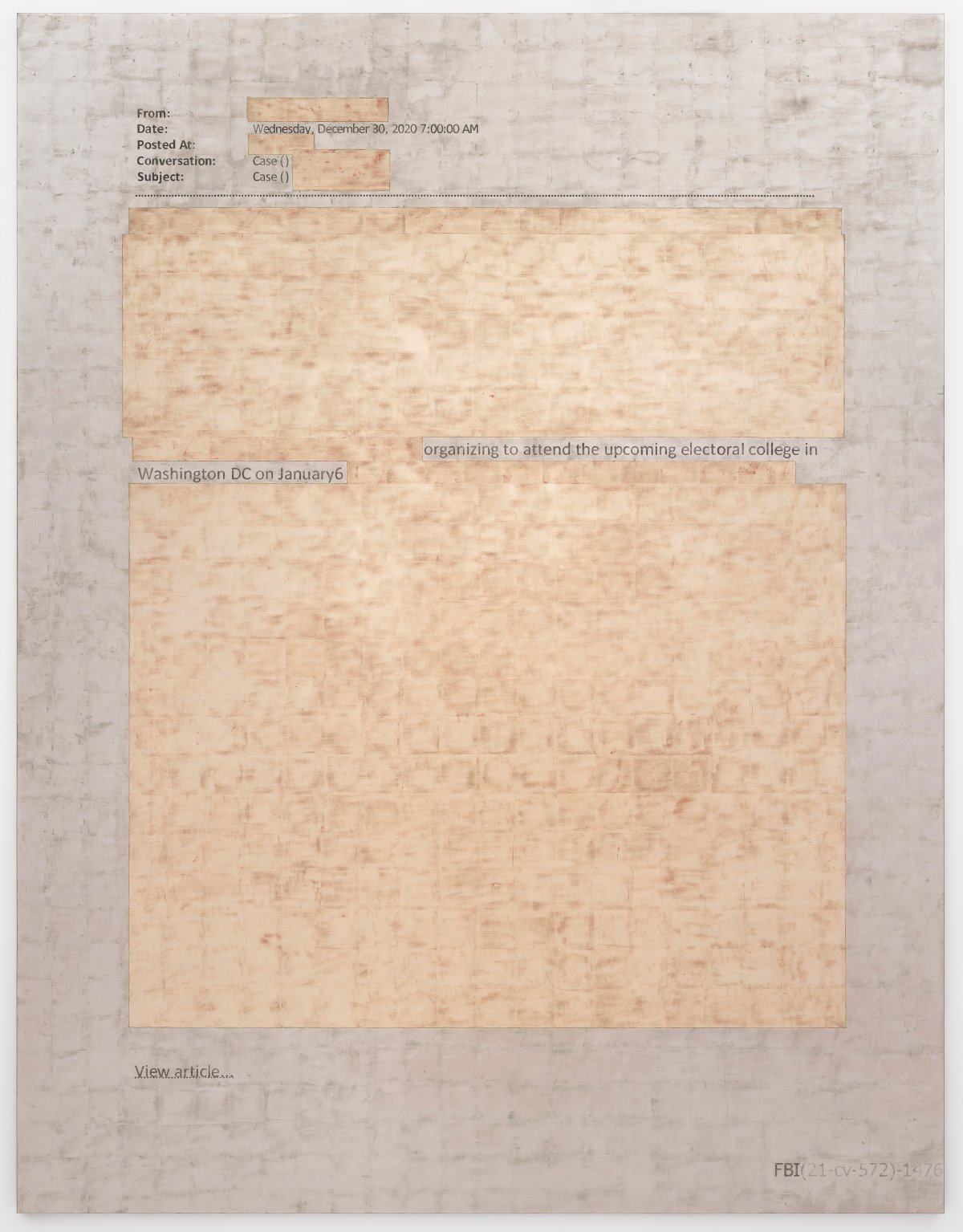 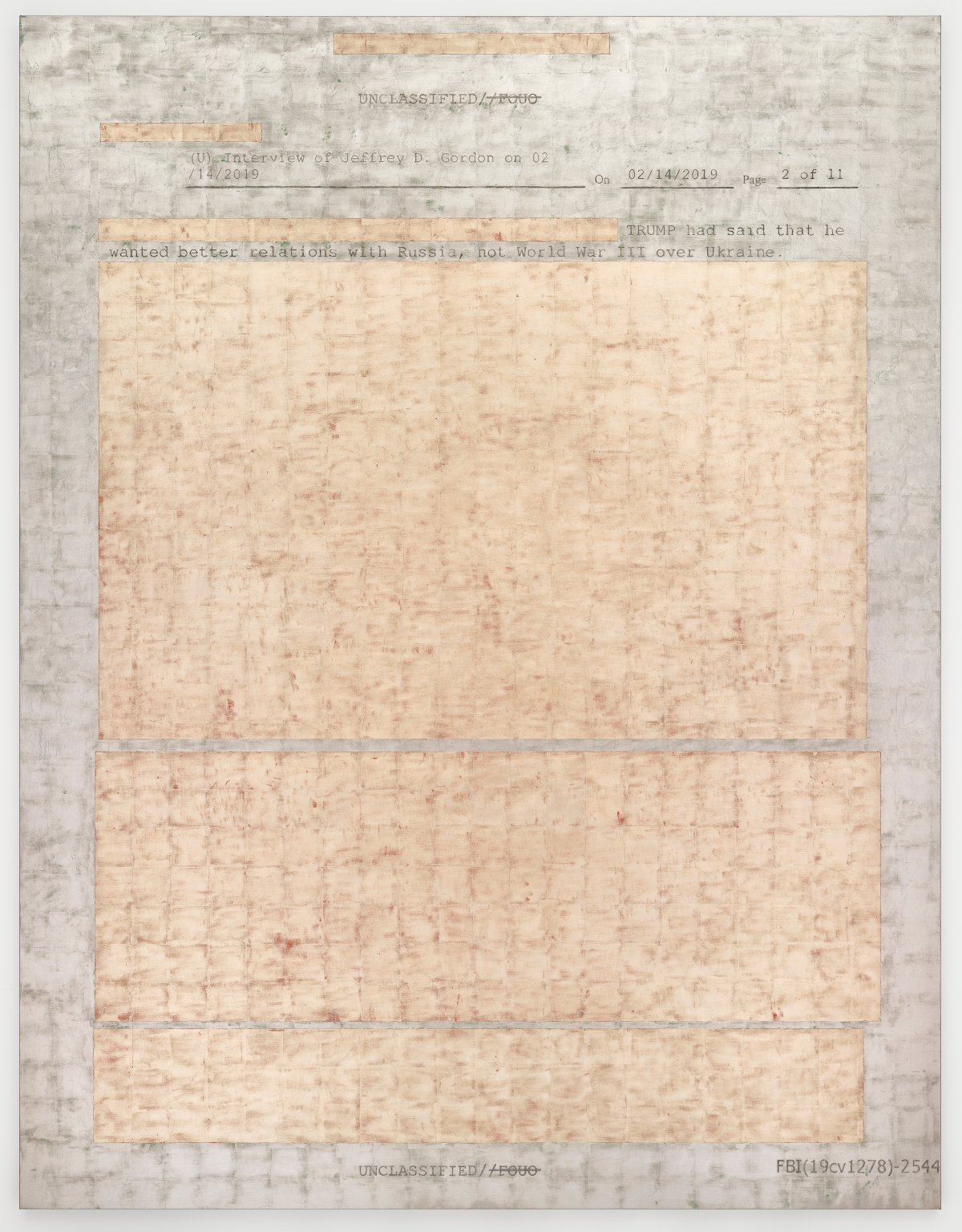 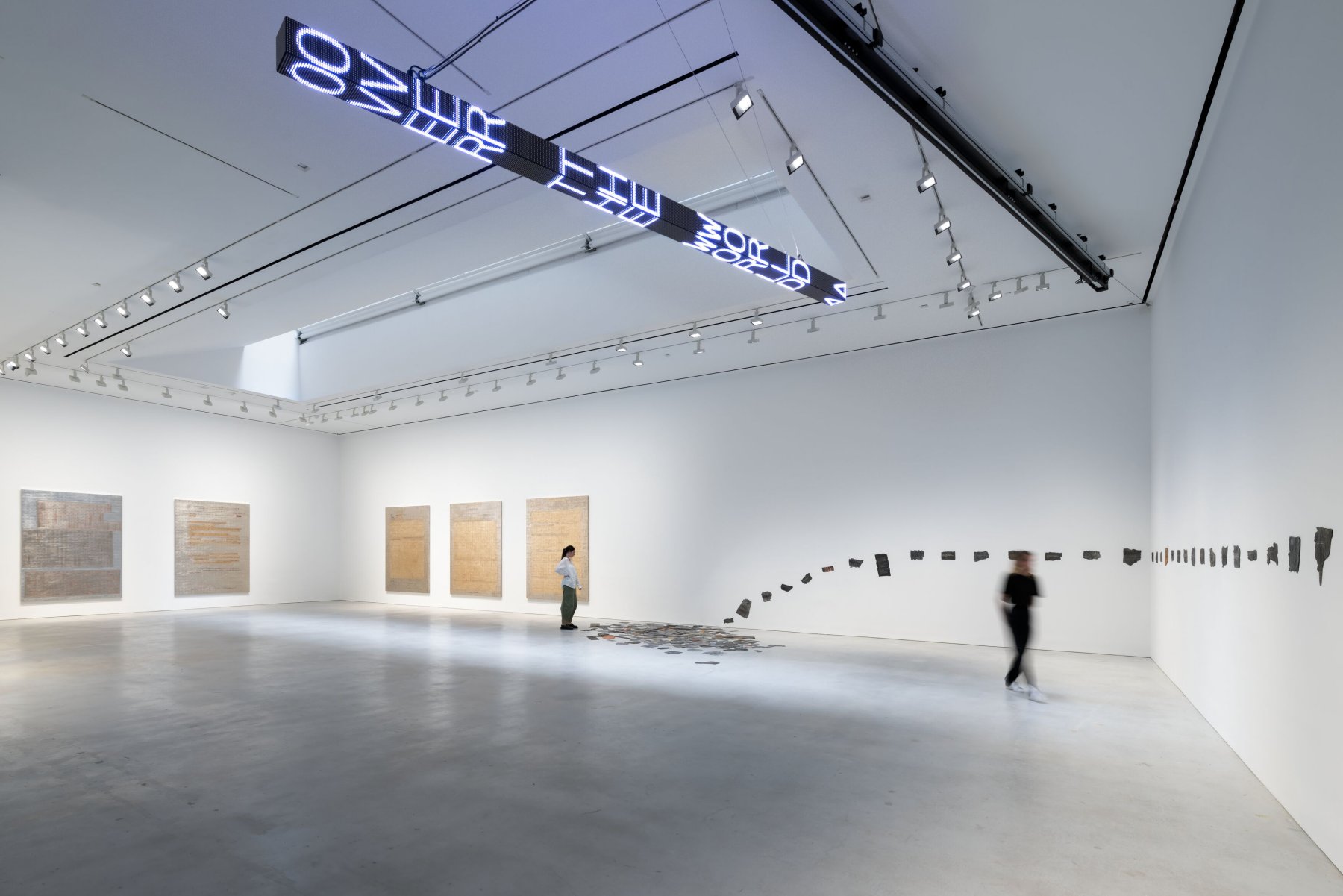 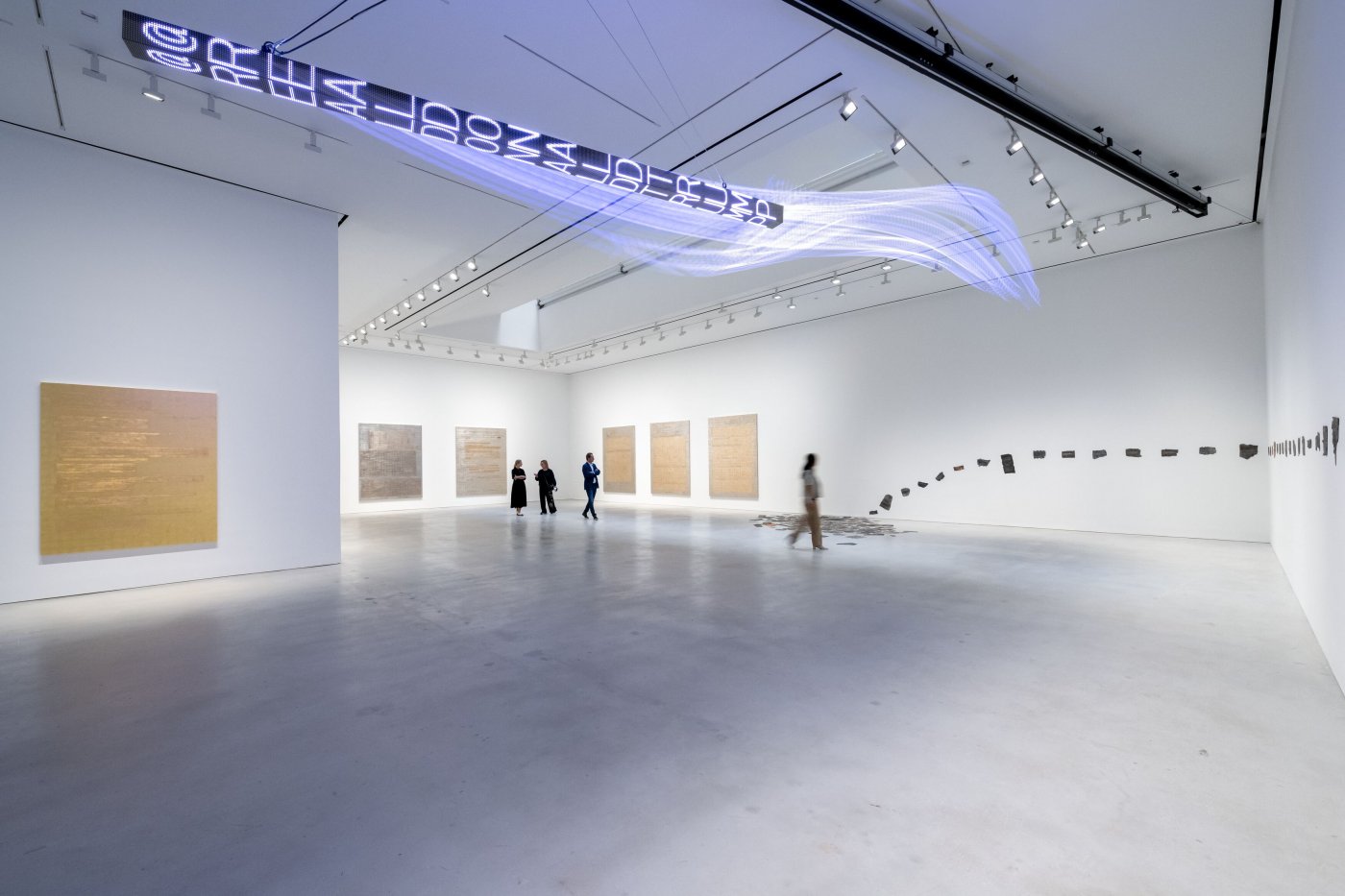 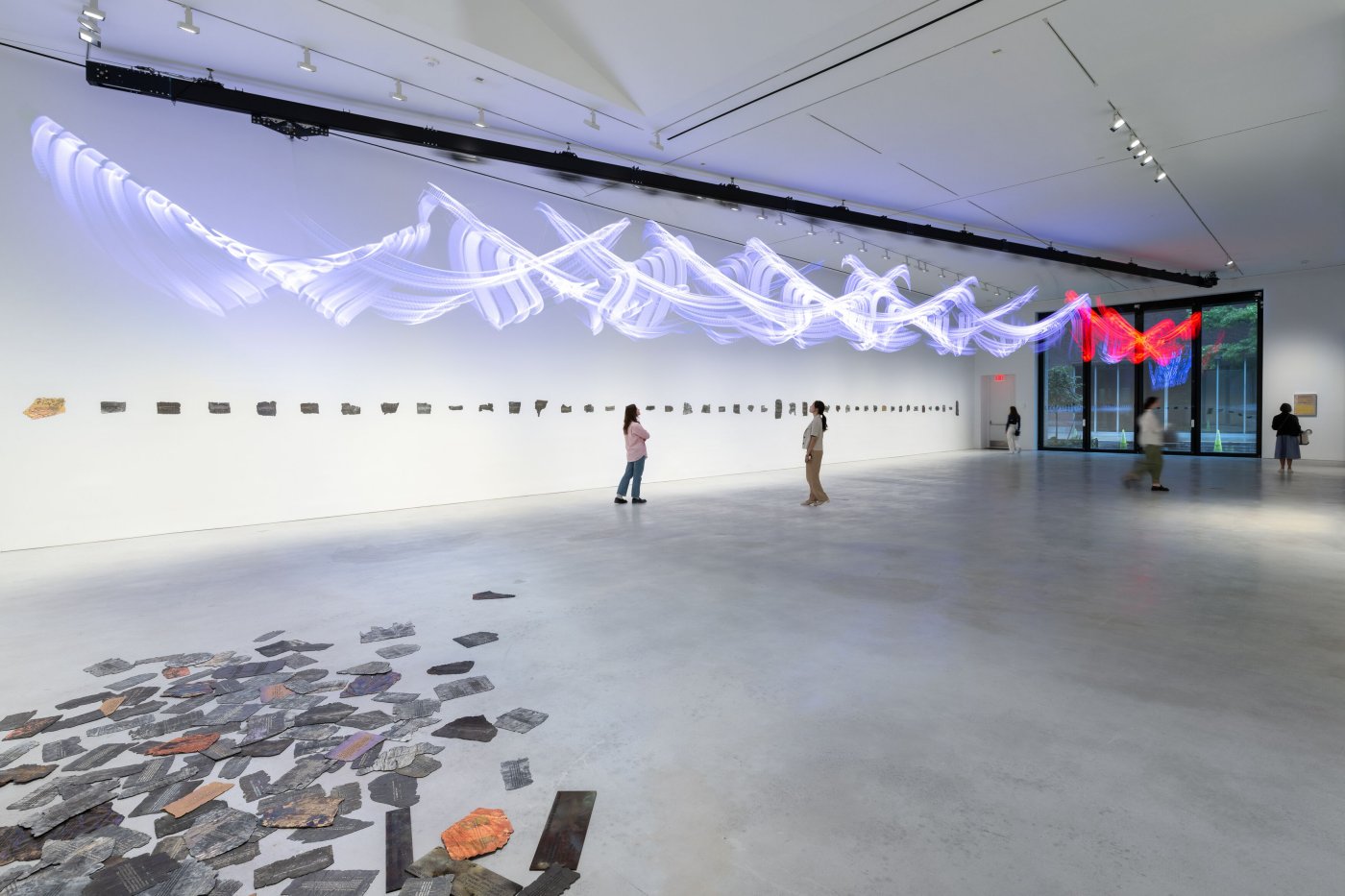 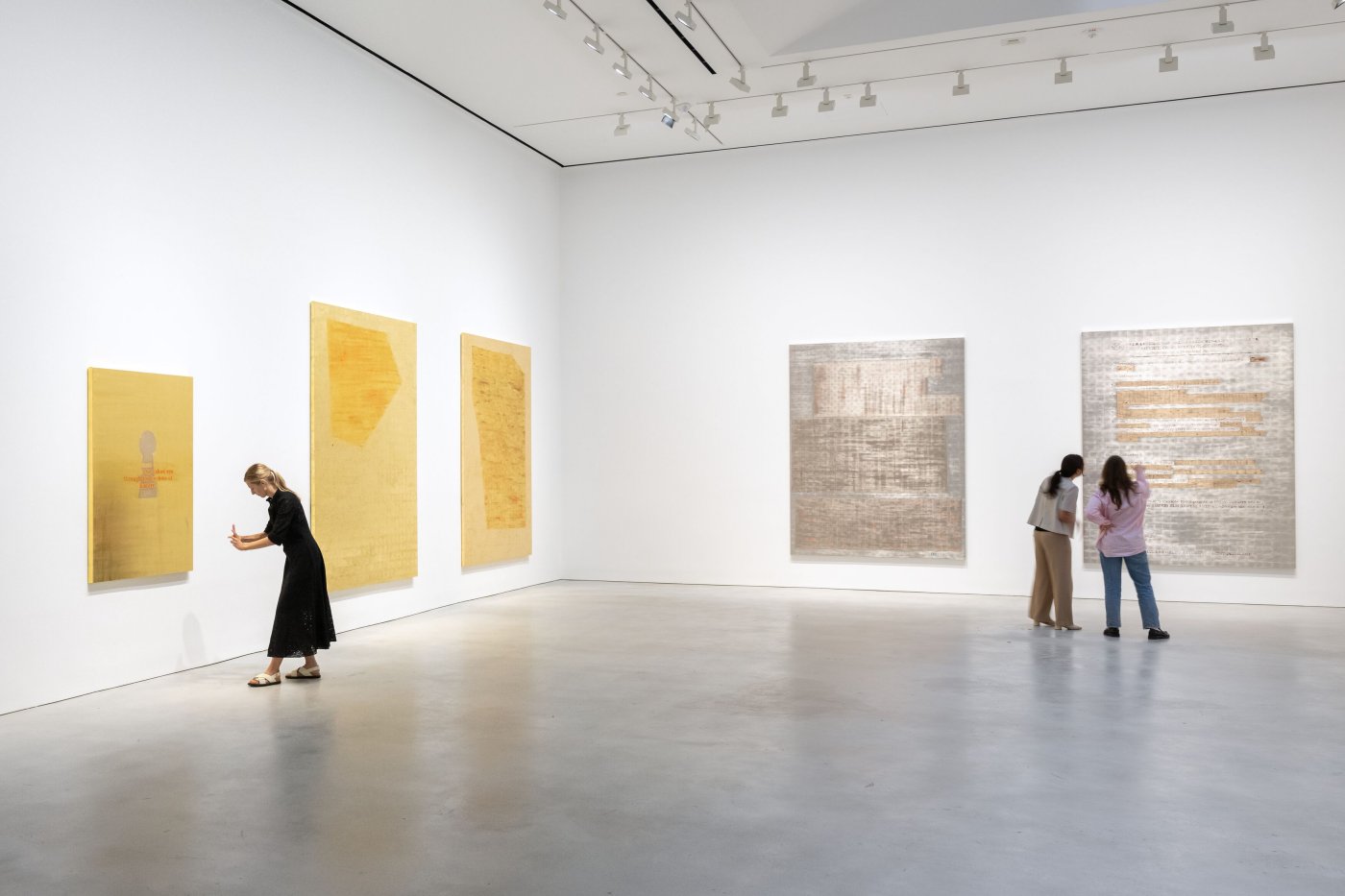 Holzer’s Hauser & Wirth New York debut sees the artist engaging directly with the present moment, drawing from new and ancient cultural-political materials to illuminate contemporary life. A centerpiece of the presentation, ‘WTF’ (2022), is a swinging electronic sign with tweets posted by Donald Trump during his presidency and posts by Q, leader of the QAnon conspiracy. The latest in a string of experiments with kinetics, ‘WTF’ slides along a track in an unpredictable cadence that echoes the erratic rhythm with which the messages appeared online. The flashing and scrolling texts illuminate nearly 300 ‘curse tablets’ lining gallery walls and scattered across the floor. This new body of work was inspired by inscribed lead tablets used by ancient Romans to seek vengeance. Holzer’s tablets were created by stamping tweets onto metal fragments, then distressing and aging them through crumpling, folding, piercing and chemical baths. Like ruined or molten iterations of Holzer’s previous evocations of public plaques, the damaged tablets suggest refuse, wreckage and devastation. Together, the battering-ram-like electronics and quasi-archaeological tablets compose a time capsule of the recent past and present, recording the hyperbolic, enraged rhetoric characterizing today’s political and media landscape—divisive language matching or exceeding that employed in Holzer’s ‘Inflammatory Essays’ (1979 – 1982).

The exhibition also presents a selection of new large-scale paintings on linen, marking the latest phase in Holzer’s painting practice, which analyzes and visualizes the ongoing and interconnected tumults in American politics from the era of George W. Bush to the present. The surfaces of these works are are built over tracings of enlarged pages of heavily redacted government documents, including Special Counsel Robert Mueller’s report on Russian interference in the 2016 US Presidential election and FBI records pertaining to the Patriot Act. Holzer meticulously covered the redactions and blank space with colorful blocks of oil paint before adding layers of luminous gold, platinum and other metal leaf. The paintings’ seductive beauty belies the difficult content beneath their surfaces, reminding viewers that the world around us contains truths and secrets that are suppressed yet eminently present.