Jeff Koons & Cy Twombly: Primal Gestures brings together a highly unusual pairing of two giants of post-war art. Highlighting two seemingly opposing practices, the exhibition exposes Twombly’s rich visual lexicon of mark-making and gestural abstraction, pairing it with the reductive nature of Koons’ machine-made fabrications while teasing out underlying elements that suggest a commonality that is perhaps not all it appears to be. 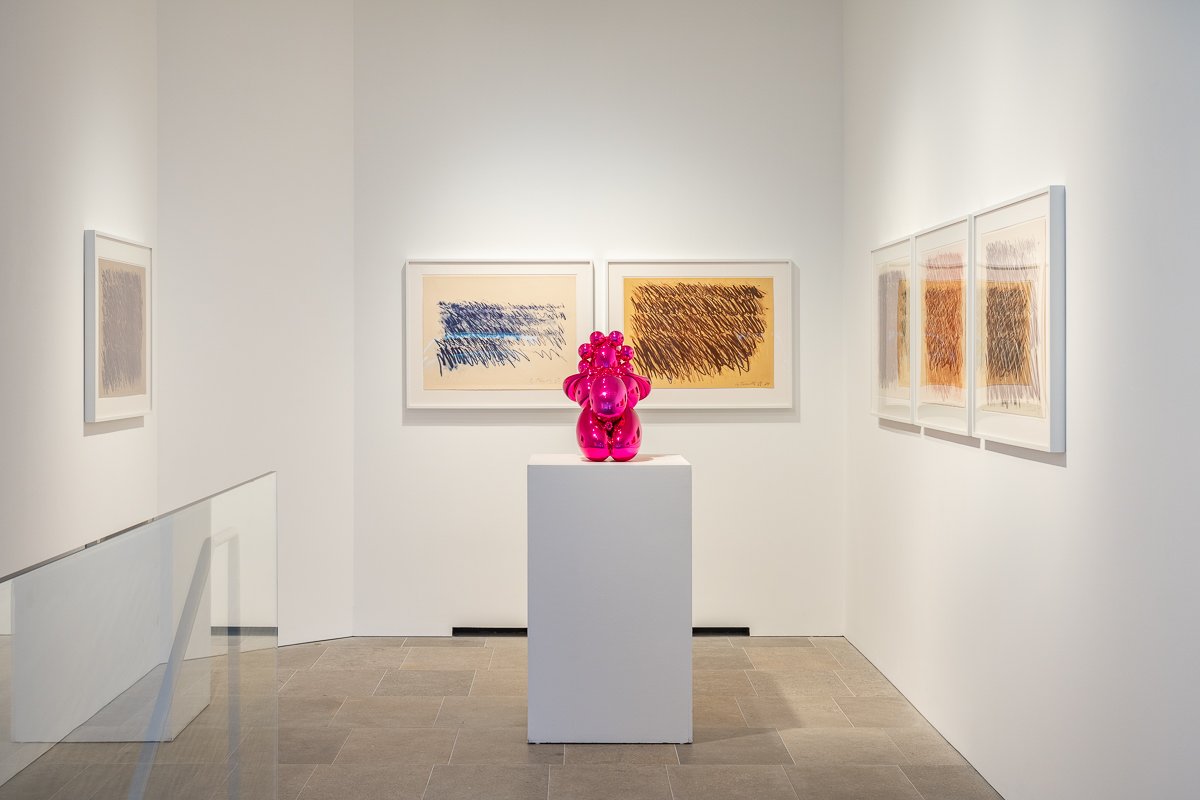 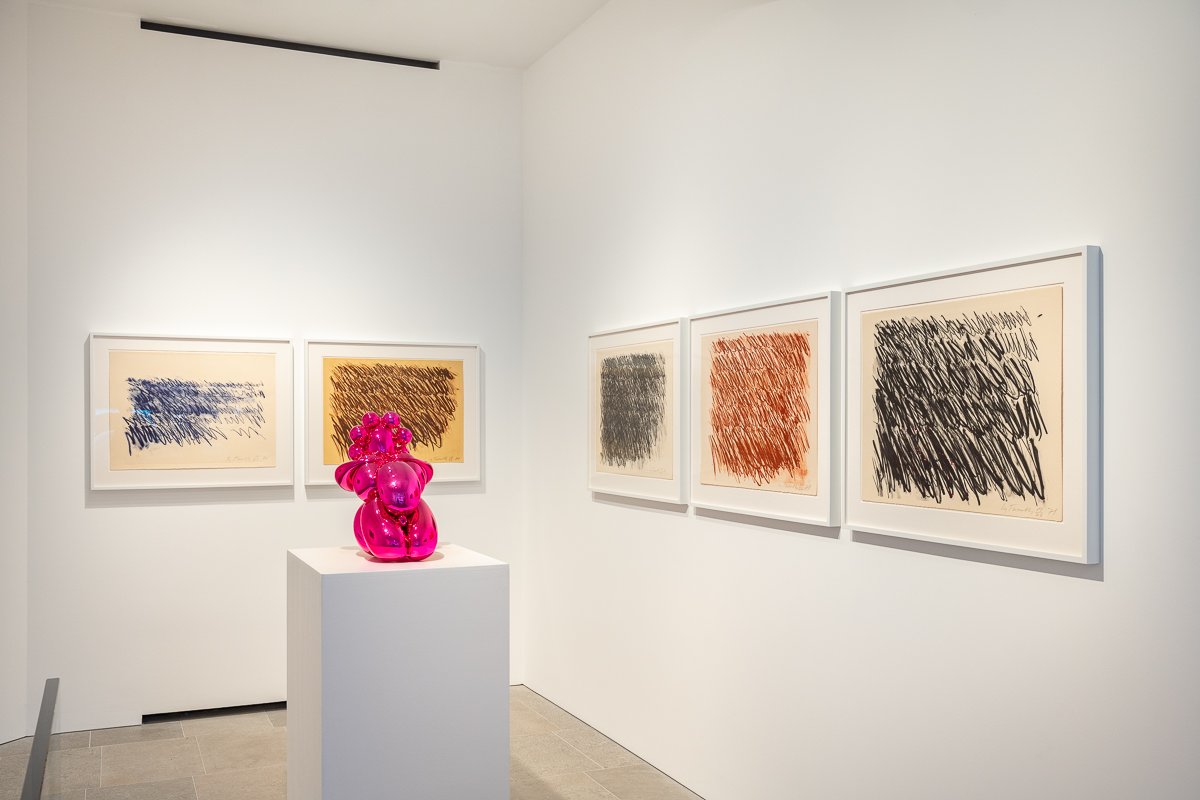 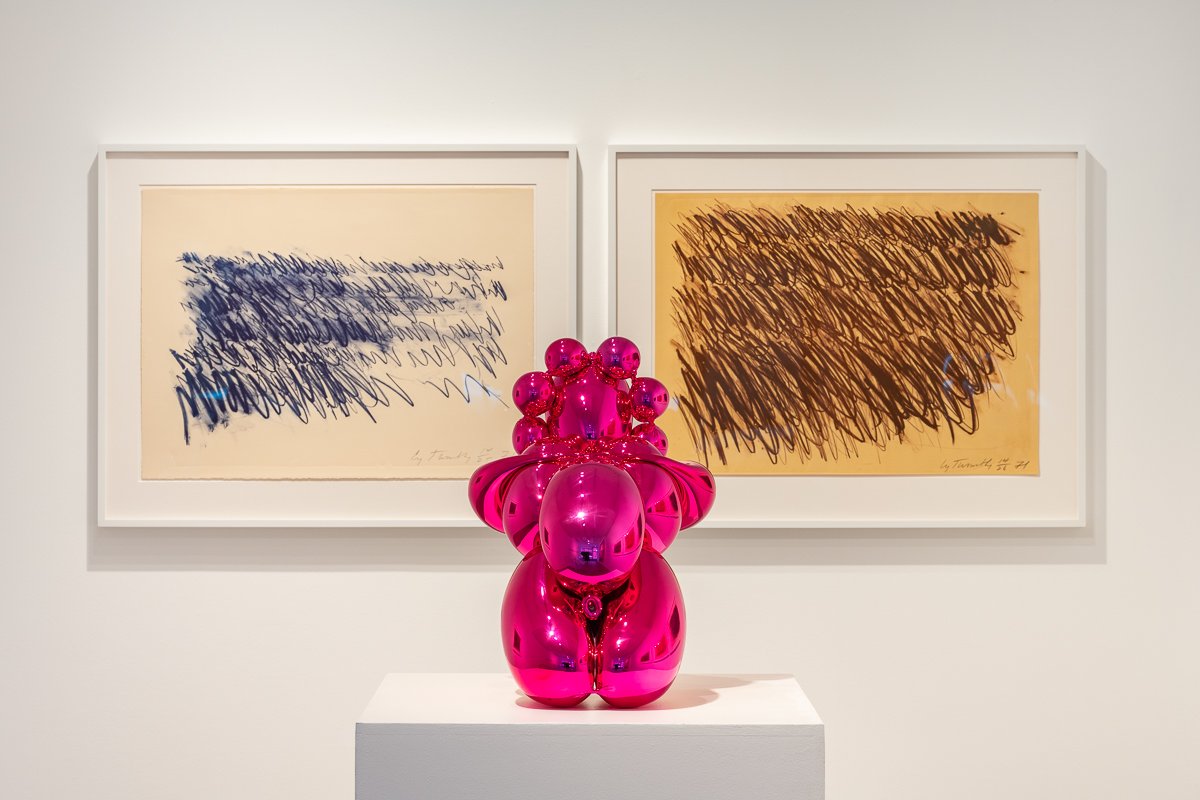 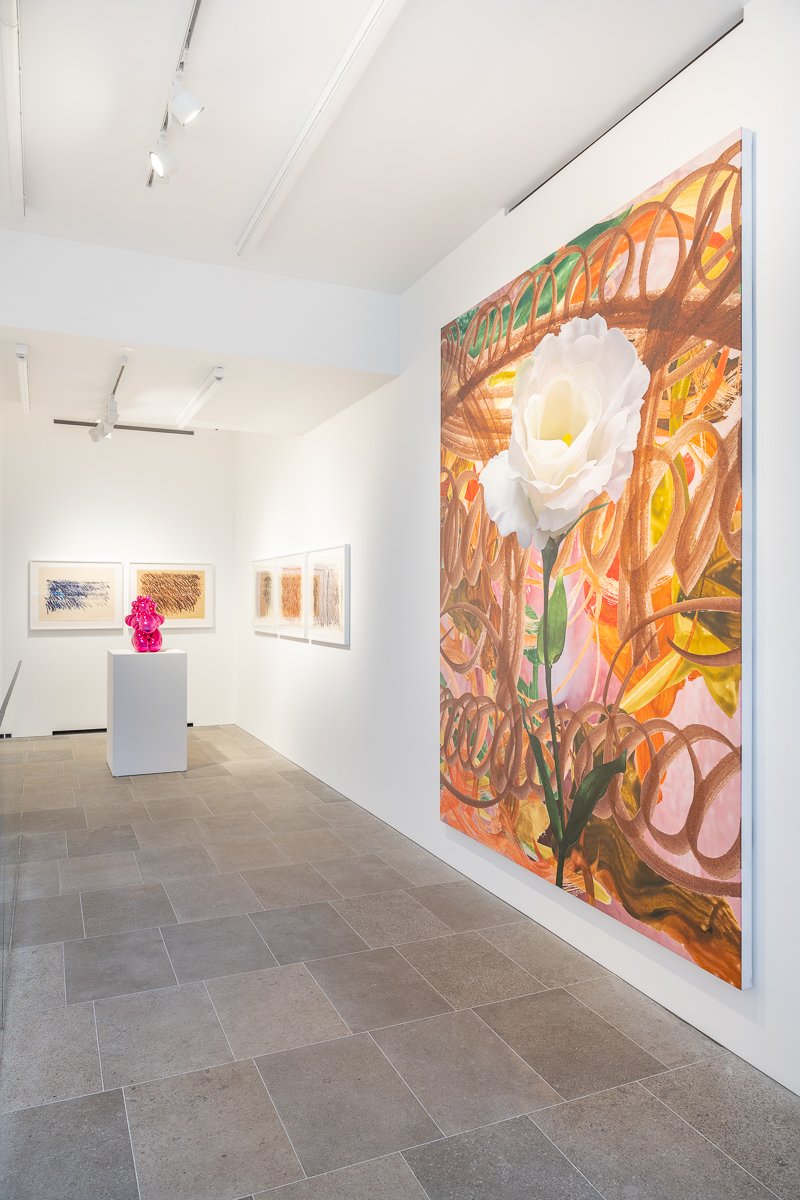 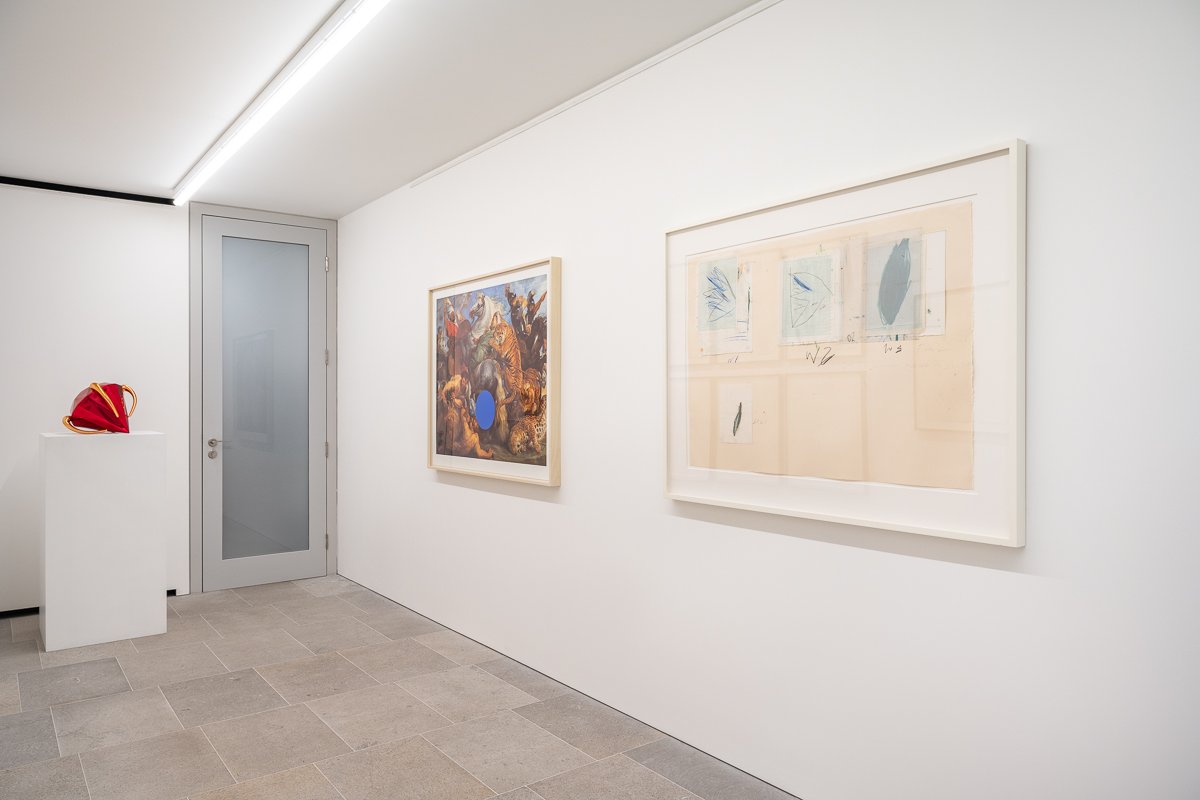 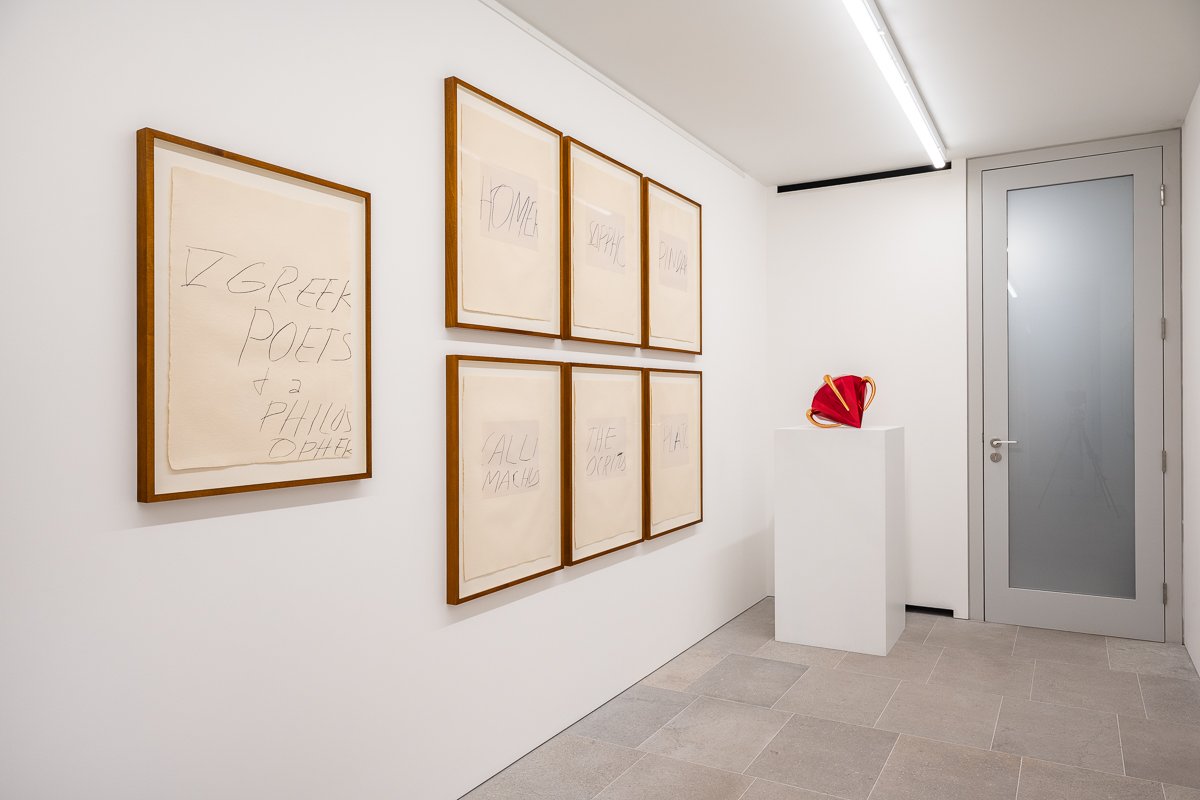 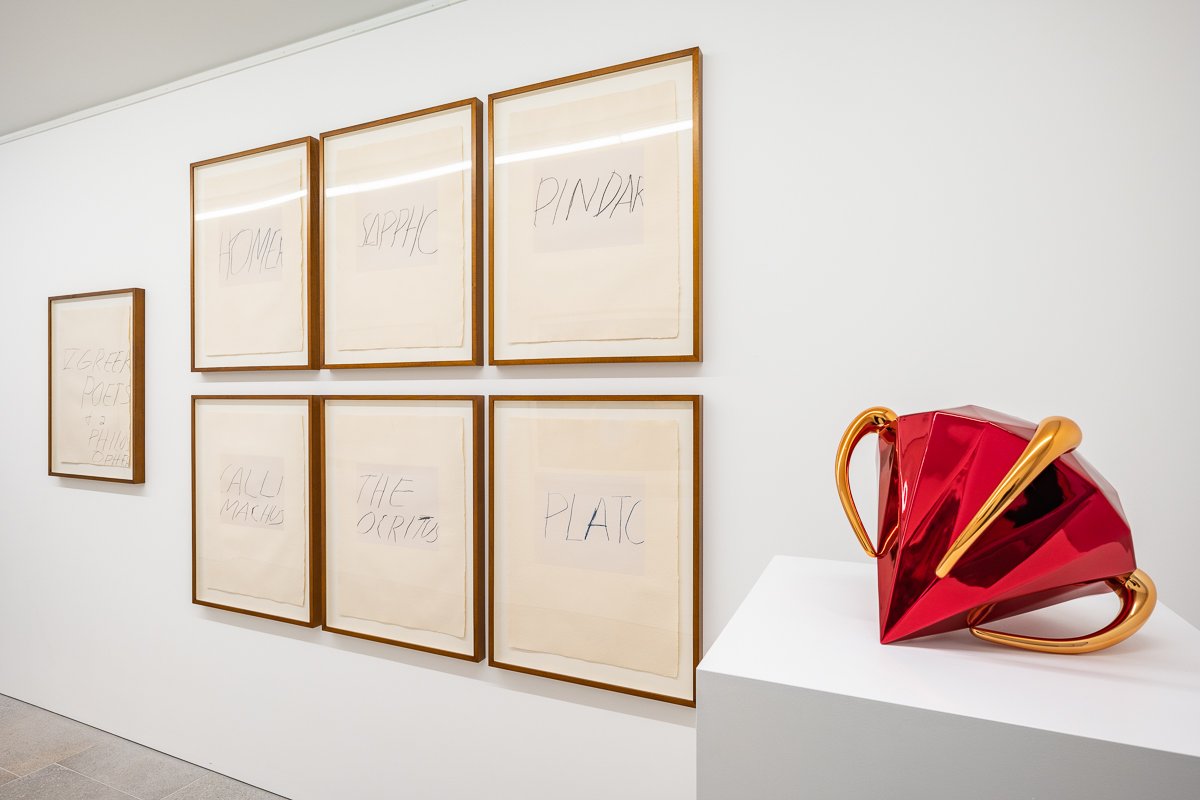 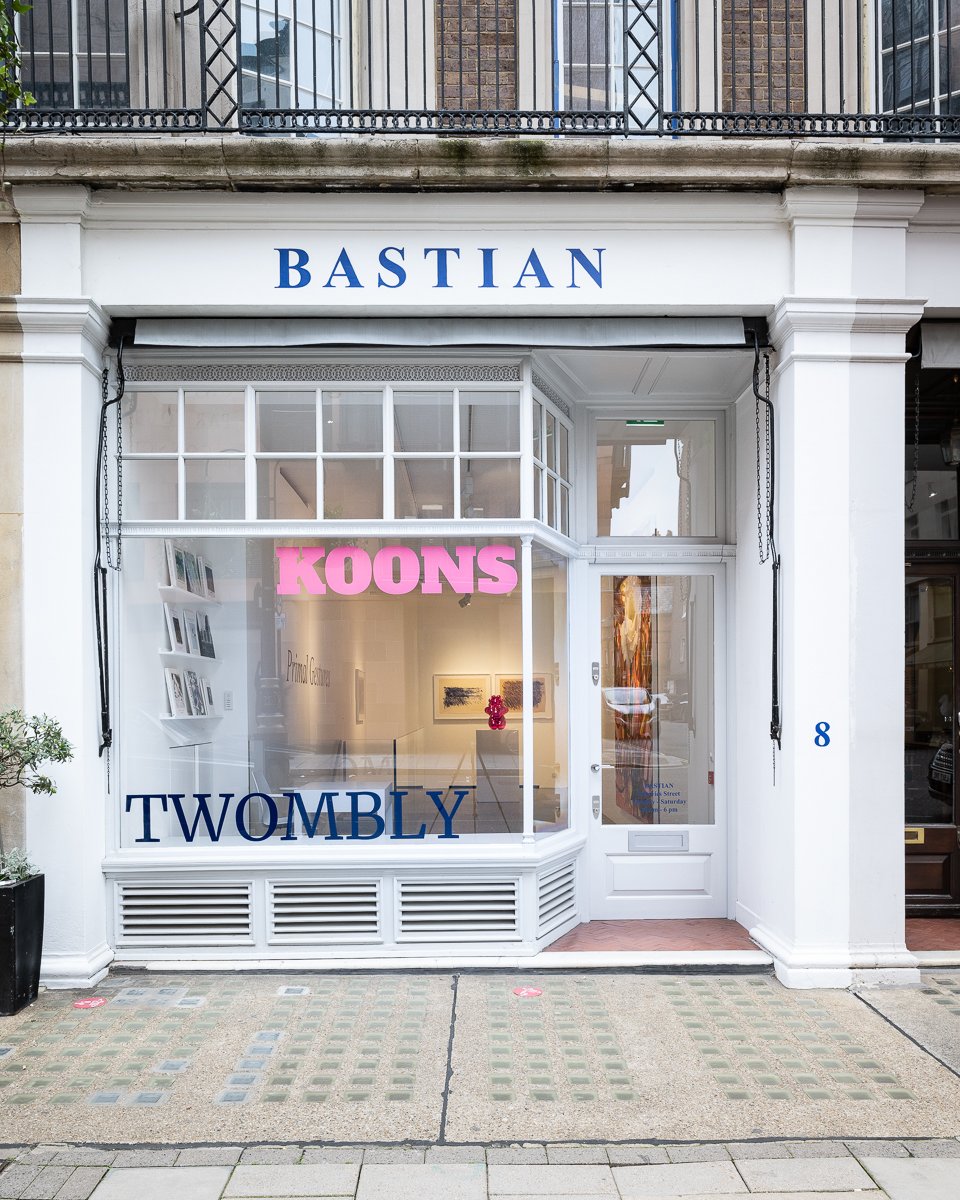 The title of the exhibition has its genesis in Koons’ monumental painting, Primal Swish. Executed between 2008-11 this rich tapestry showcases a multi-layered explosion of energetic swirls whose energy is jarred against the serenity and three-dimensional lure of a rose. There is, however, an unsettling precision in the way Koons has applied his expressionistic linear brushstrokes, luring the viewer into a Twombly-esque vigour of densely layered gestures. Lacking any emotive character and natural fluidity, these deceptive swirls and scripts have in fact been enlarged, edited and layered using Photoshop, before being fastidiously painted on canvas to achieve an exact replication. Koons writes, “They are fake gestures… – they make reference to gestures. A gesture can be an intellectual gesture, it doesn’t have to be physical.” Here we see Koons set his sights on a meticulous devotion to the mechanics of reality as he unpicks the chameleonic dynamic between the physical and the psychological.

Exhibited alongside is Cy Twombly’s Untitled set of six lithographs executed in 1971. A series born out of the artist’s desire to achieve a more expressive form of gesture. Working directly onto the litho stones, Twombly was able to indulge in a more visceral process of mark-making, developing a new script that spoke directly to the relationship between crayon and stone, ink and paper. Regarded as the pinnacle of Twombly’s achievements in printmaking, this series encapsulates the artist’s fascination with raw gestural mark-making while capturing a melody of heavy impasto coils, sharp scratches and frenetically sketched spirals.

Two further Koons works here are from the Gazing Ball series in which the artist makes direct reference to canonical works art. In each image a mirrored, seemingly three-dimensional, hand- blown blue glass gazing ball reflects its surroundings. On closer inspection the surface remains resolutely two-dimensional, drawing the viewer to dissect another cunning interplay between fact and fiction.

Like much of his work, the Gazing Ball series reactivates and intensifies familiar scenes, whether from legend or the everyday, reflecting and affirming viewers and their environments. Cy Twombly developed a gestural vocabulary in which each line and colour is infused with energy, spirituality, and meaning. His works are simultaneously personal and mythological, allowing narrative, language, and inner visions to erupt from his intimate, abstract notations. Also included in the exhibition is Twombly’s Five Greek Poets and a Philosopher, a set which captures the artist profound dedication to ancient culture. Sharp, gestural capital letters tease out the names of Latin poets and Greek philosophers, as if presented scrawled onto stone tablets.

The exhibition encourages the viewer to decipher the politics of process and presentation, to find merit in the hyperreal reproduction or the frenetic violence of primal gestures.