Nahmad Contemporary presents Jean-Michel Basquiat: Art and Objecthood. Curated by Basquiat scholar Dr. Dieter Buchhart, the exhibition is the first dedicated to the role of found objects and unconventional materials in the artist’s oeuvre. Basquiat, whose artistic practice has profoundly impacted audiences on an international scale, used objects and media from his environs to proliferate messages of social justice and change. 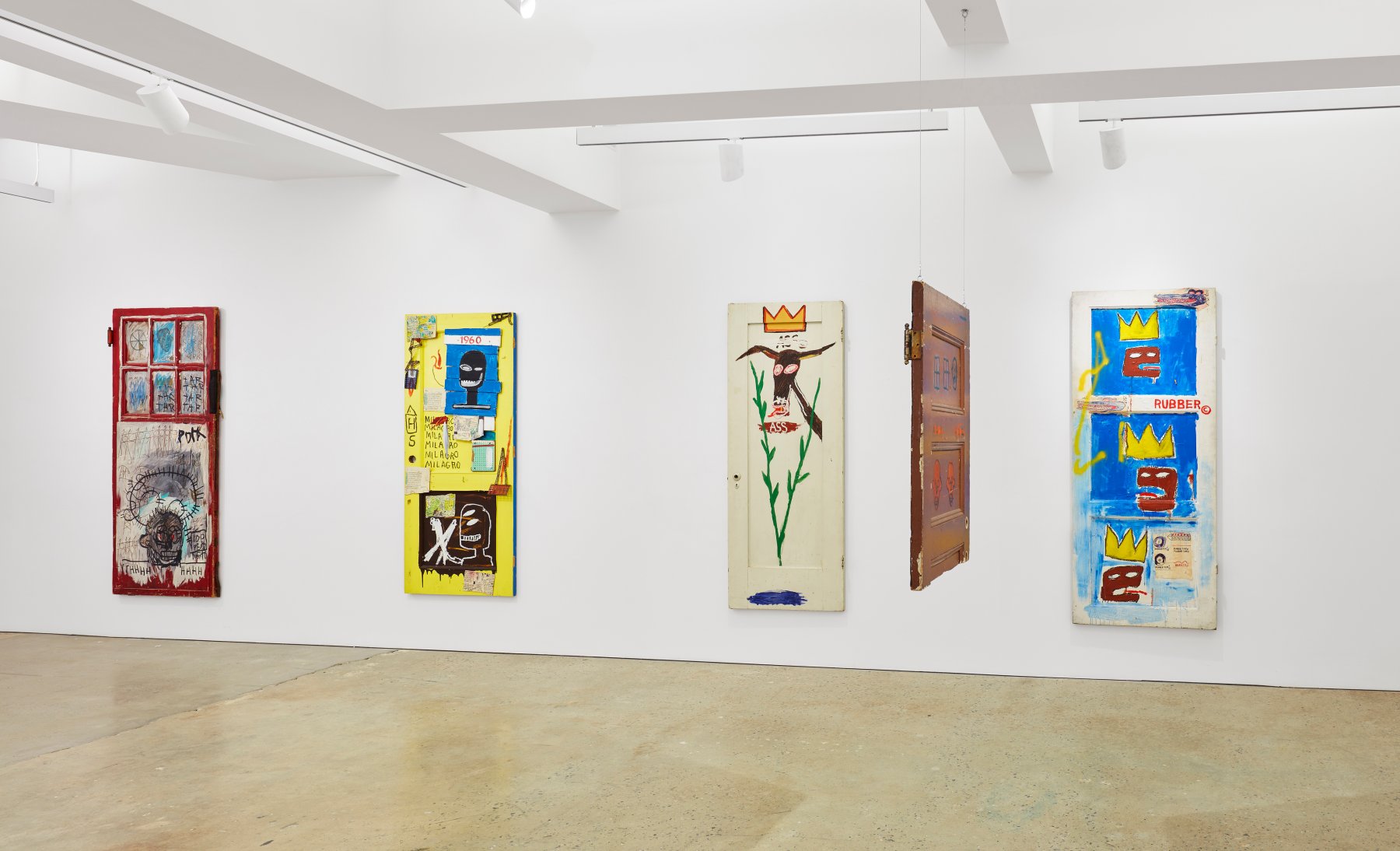 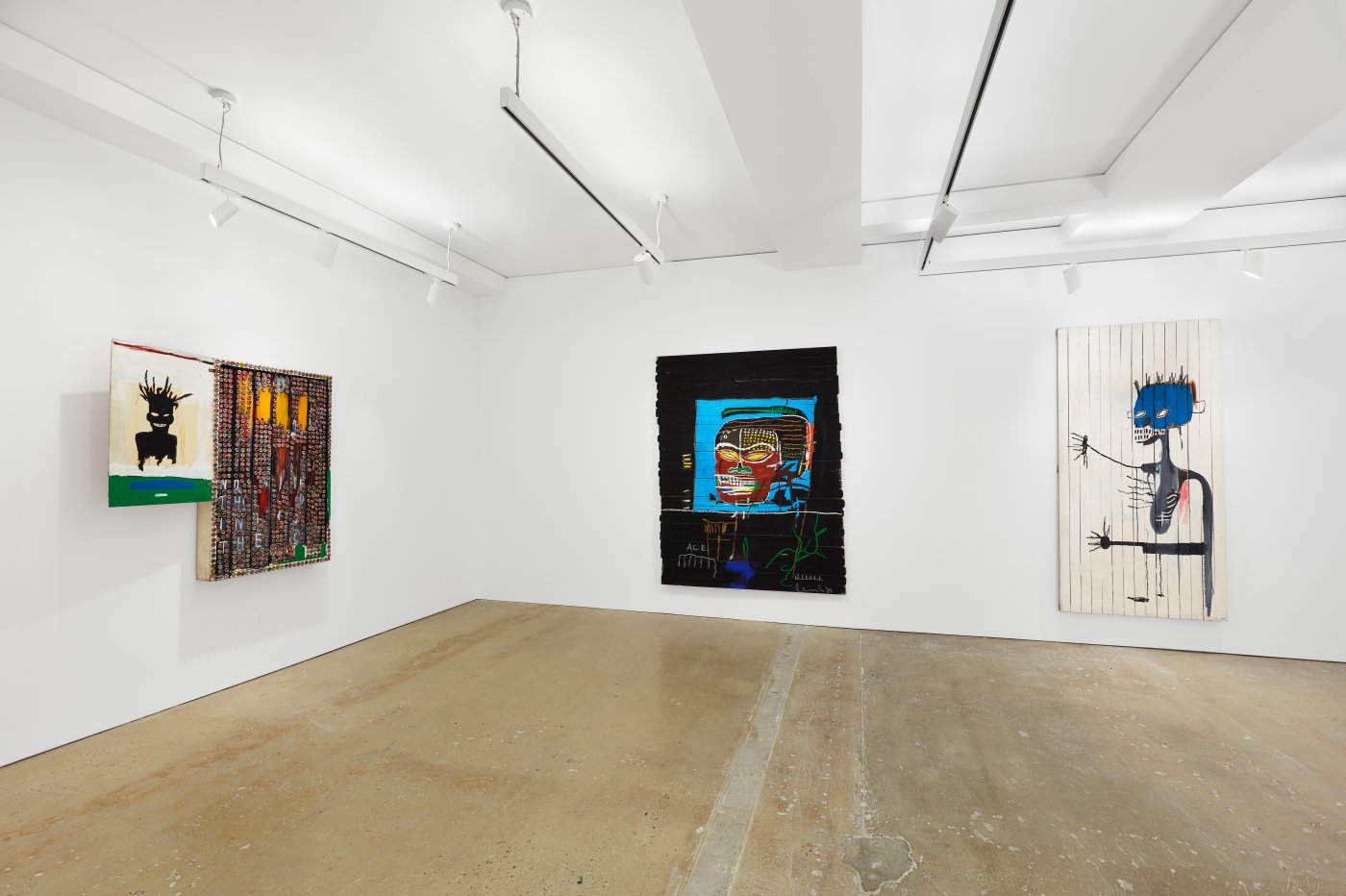 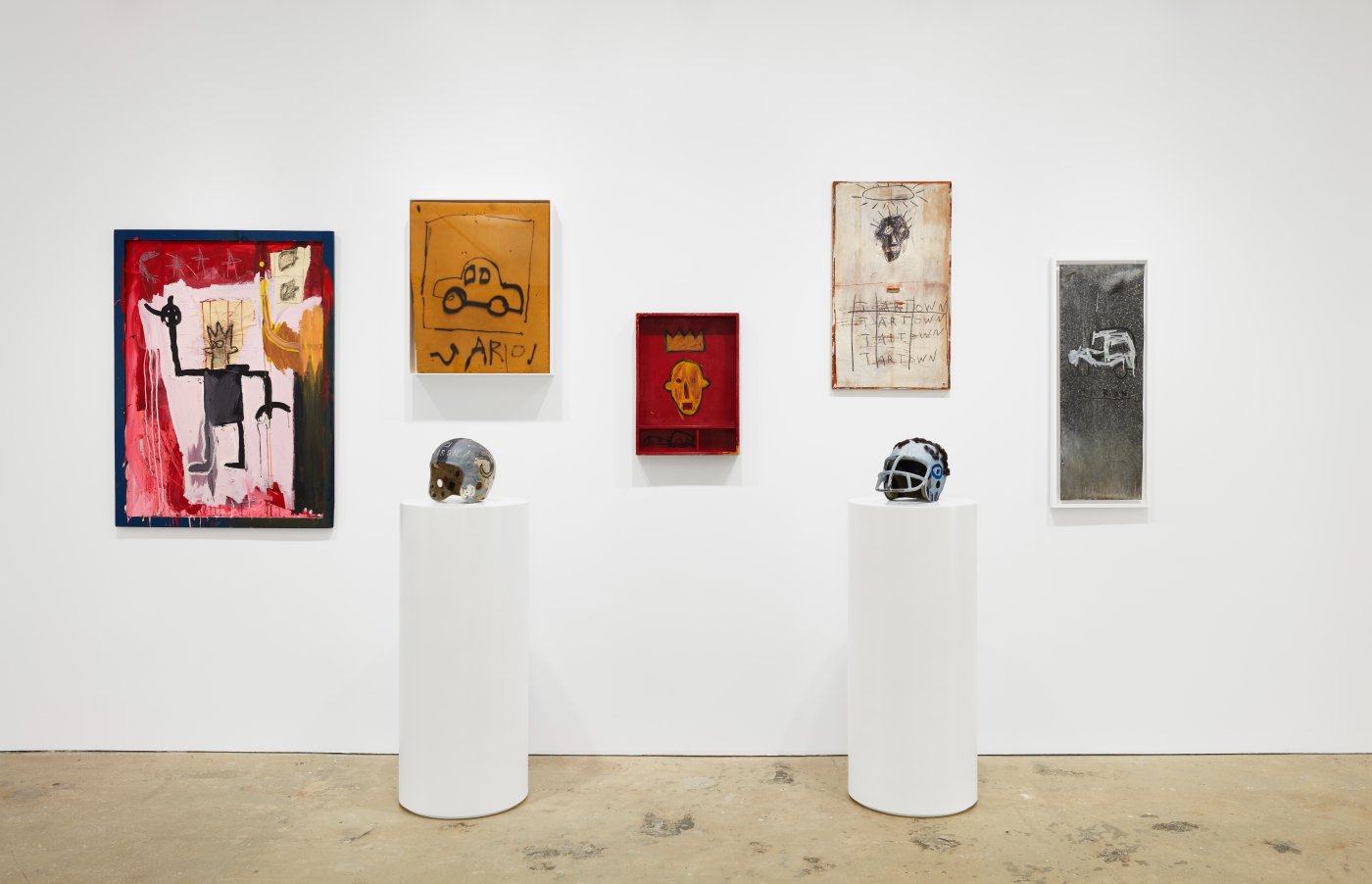 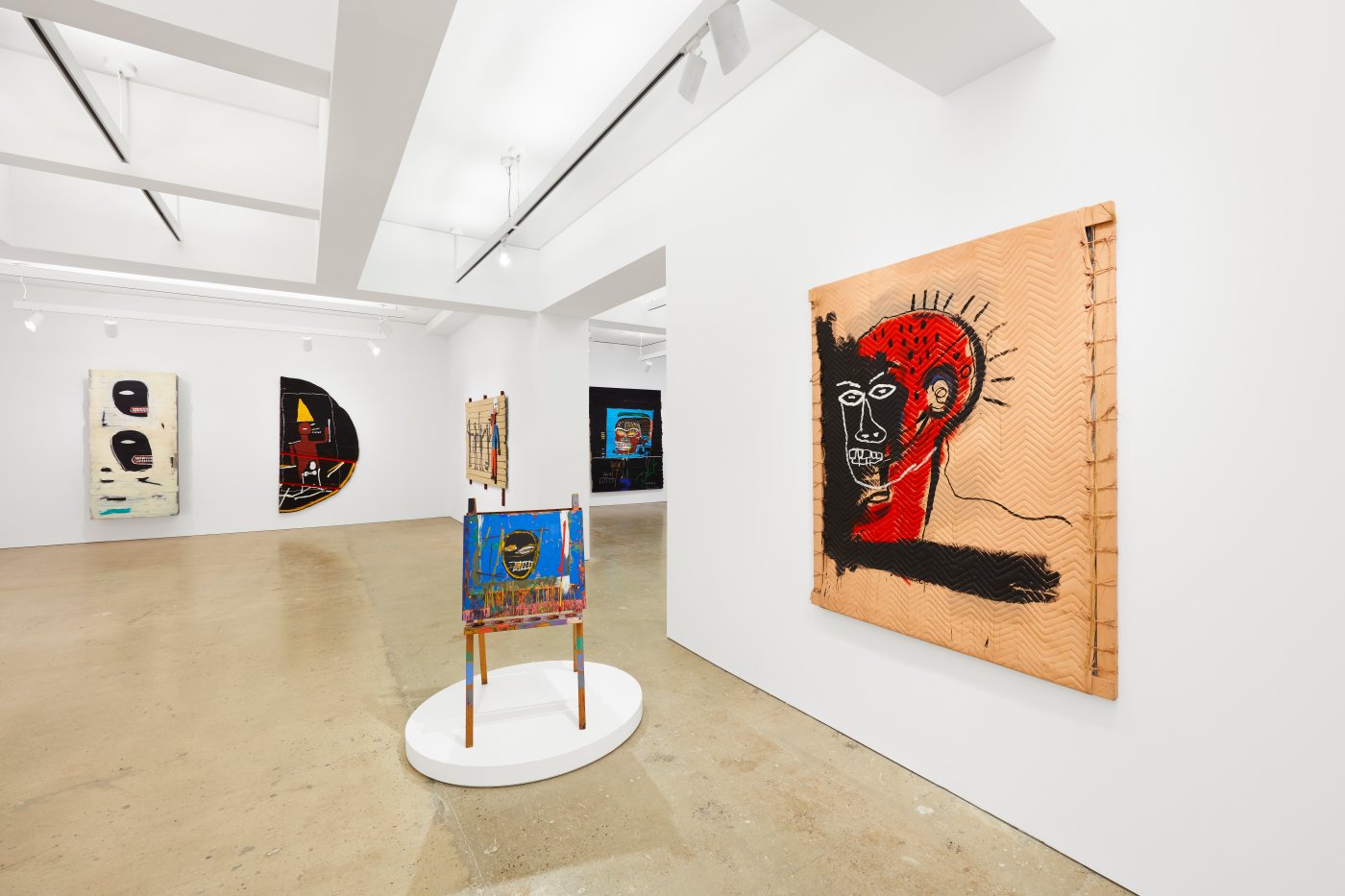 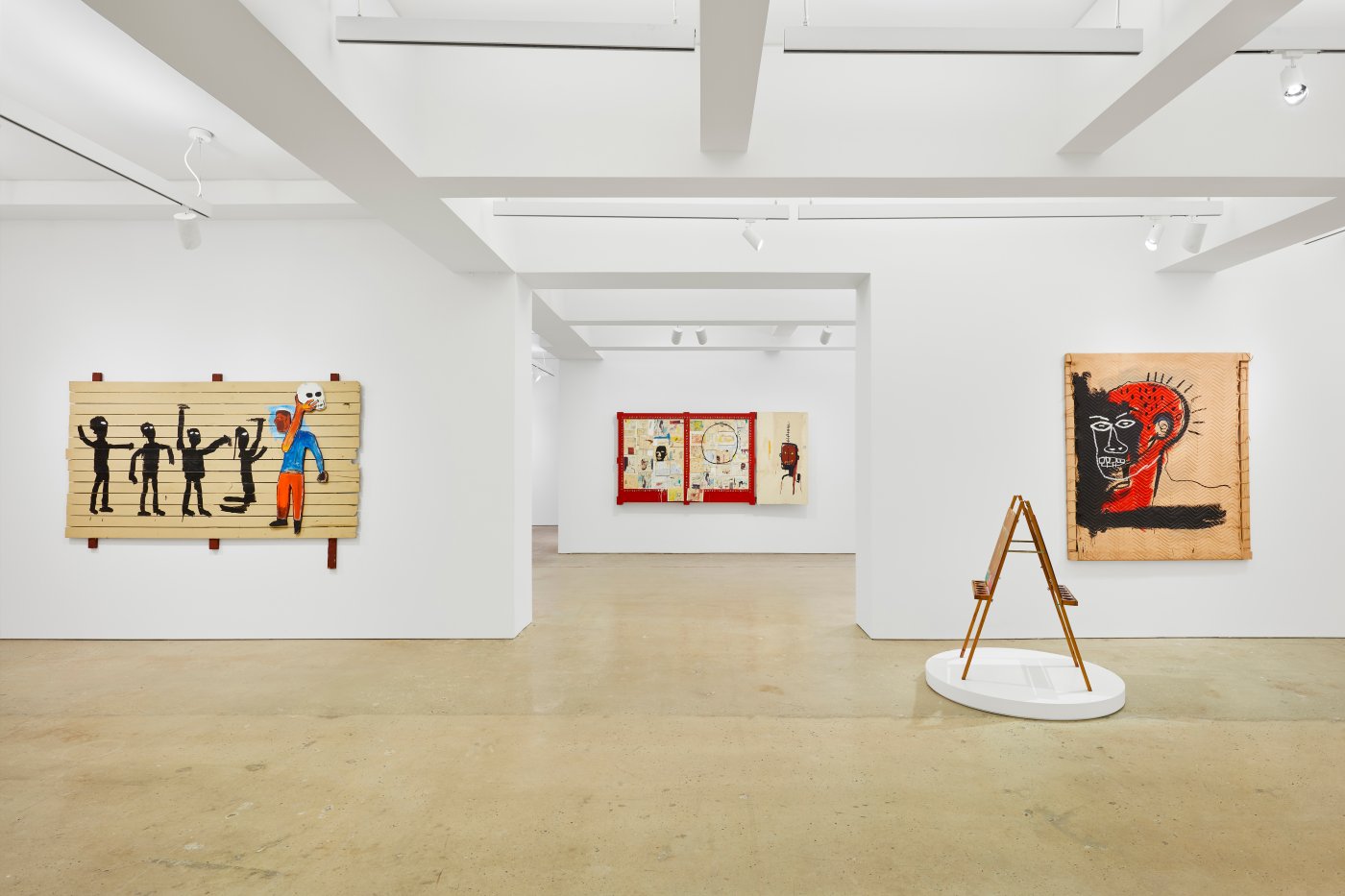 Bringing together a breadth of unconventional painted supports and found-object sculptures, Jean-Michel Basquiat: Art and Objecthood provides an innovative, in-depth look into the artist’s sculptural practice. In addition to painting and drawing on everything within his domestic spaces— refrigerators, chairs, cabinets—Basquiat harnessed and left his mark on items he encountered on the street—discarded windows and doors, mirrors, wood boards, subway tiles. Notably, such found objects were among the artist’s earliest creations. In a 1985 interview by Becky Johnston and Tamra Davis in California, Basquiat explained: “The first paintings I made were on windows I found on the street. And I used the window shape as a frame, and I just put the painting on the glass part and on doors I found on the street.” The found objects remained tied to their public origins, and the street, as a concept and space of association, became an important artistic subject.

Basquiat developed his artistic repertoire within the vibrant New York art scene of the early 1980s, during the emergence of hip-hop’s cut-and-paste aesthetic. Sampling from his surroundings with all five senses, he used this source material not only to create spaces of knowledge but also to occupy everyday places and integrate conventional artistic media with the rebellious gestures of marginalized society. This exhibition demonstrates the extent to which Basquiat’s sculptural practice and particular use of objects reveal his intense dedication to the struggle against social inequality, as well as his profound engagement with the politics of race in the United States. His universal system of communication—and the collective struggle against ignorance, fear, and silence portrayed by it—are more relevant today than ever.

Jean-Michel Basquiat: Art and Objecthood borrows its title from an influential essay written in 1967 by renowned modern art historian Michael Fried and ushers audiences back to the 20th century when artists forged new definitions of art by embracing nontraditional media on a wide scale. In “Art and Objecthood,” Fried decidedly critiqued the newfound minimalist sculptors for their dogmatic, literal separation between “art” and “object.” He argued that their presentation of isolated objects as works of art was mere theatrics rather than a true art, which for Fried, was mandated by the unification of art and object. Invoking Fried’s intrepid philosophical stance, the exhibition invites viewers to consider the enduring debate about art and objecthood as a lens
through which to consider Basquiat’s use of objects in the present works on view.

The exhibition is developed with the support of the Estate of Jean-Michel Basquiat and made possible by generous loans from several American and European institutions and worldwide private collections. In conjunction with the show, a comprehensive catalogue will be published by Hatje Cantz to present new scholarship by leading Basquiat academics and art historians.