For his sixth exhibition at Galerie Chantal Crousel, Jean-Luc Moulène takes us through a sculptural landscape where abstraction manifests itself as a force of thought and imagination, intertwined with still, bold figuration on a ritualized stage. 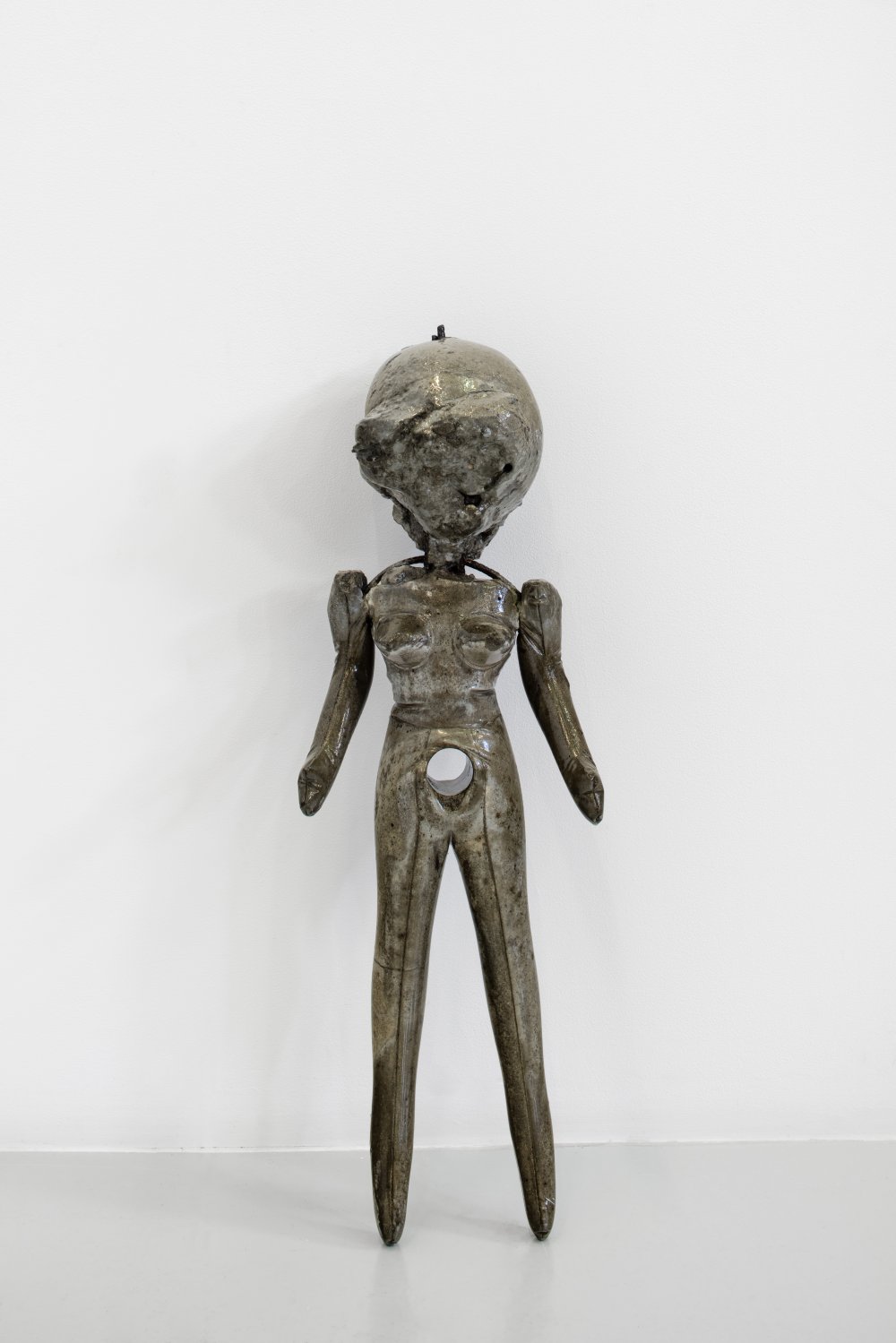 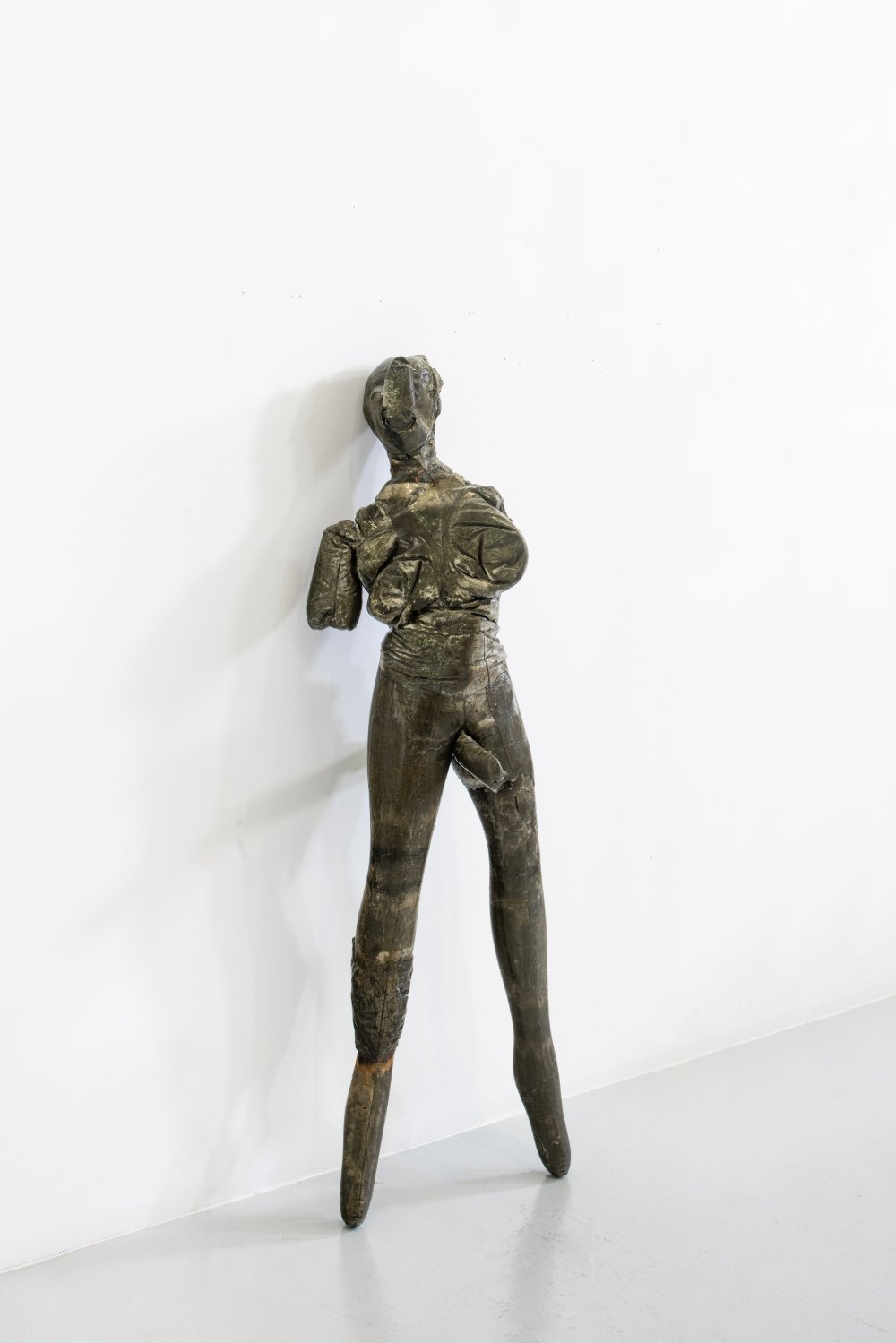 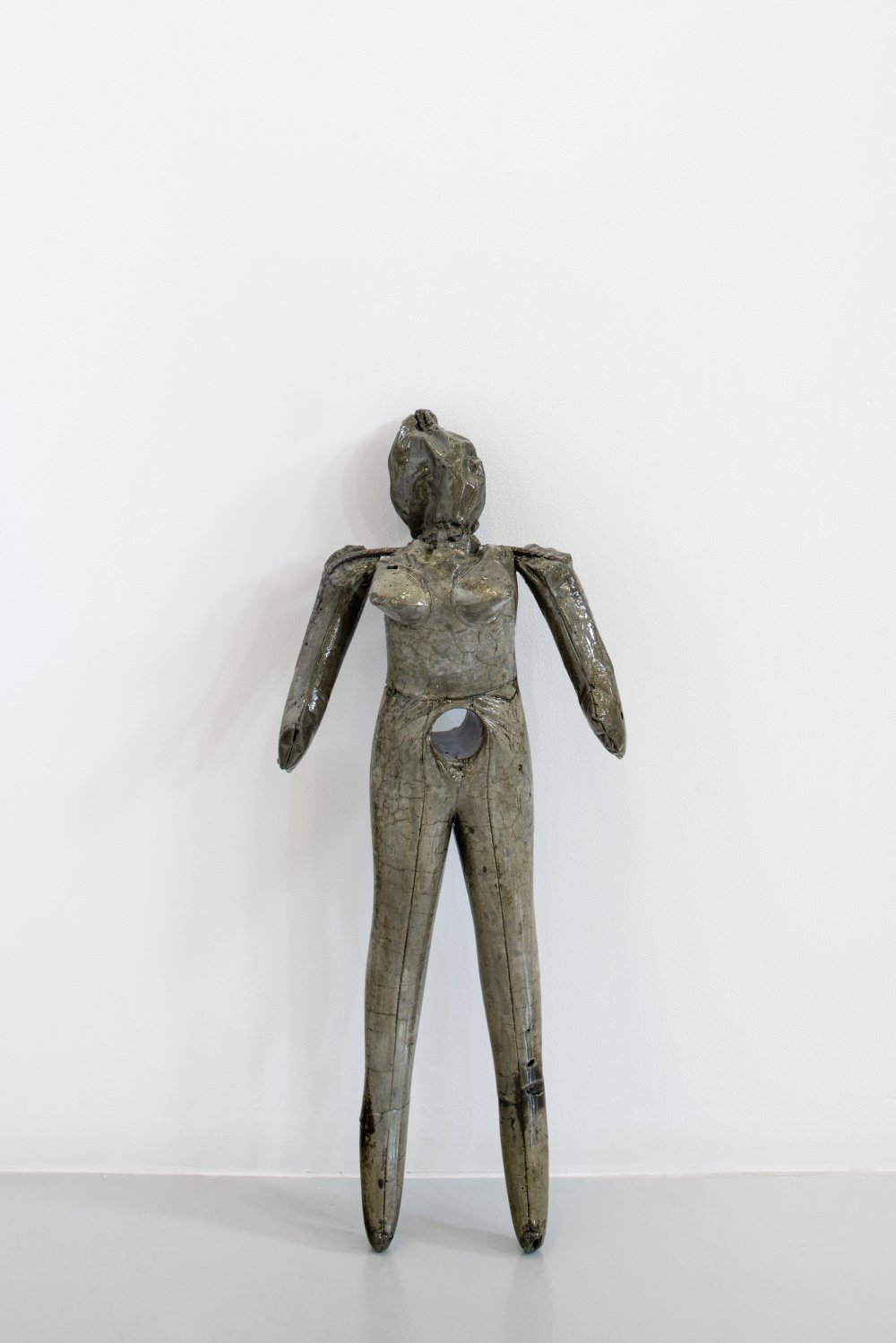 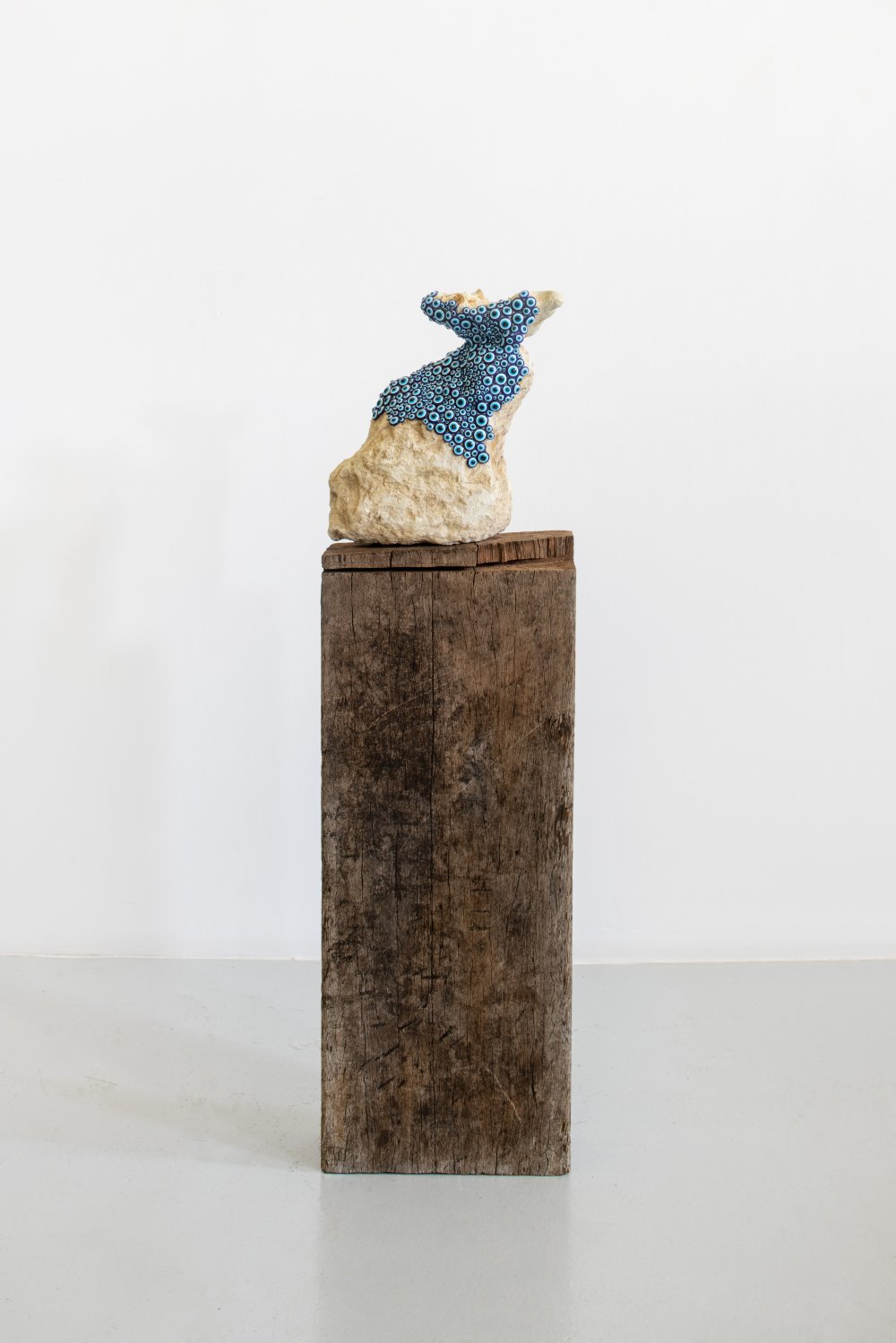 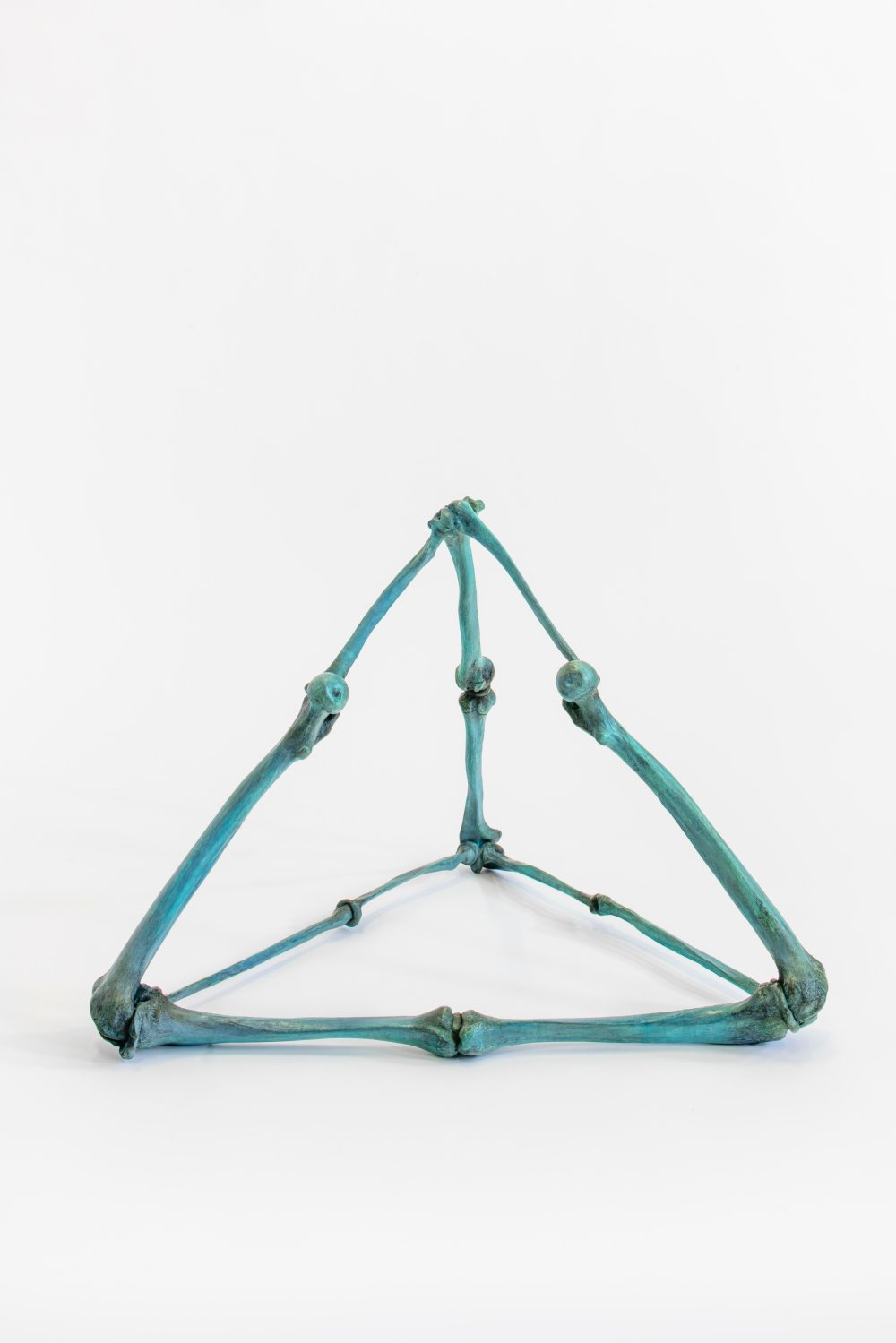 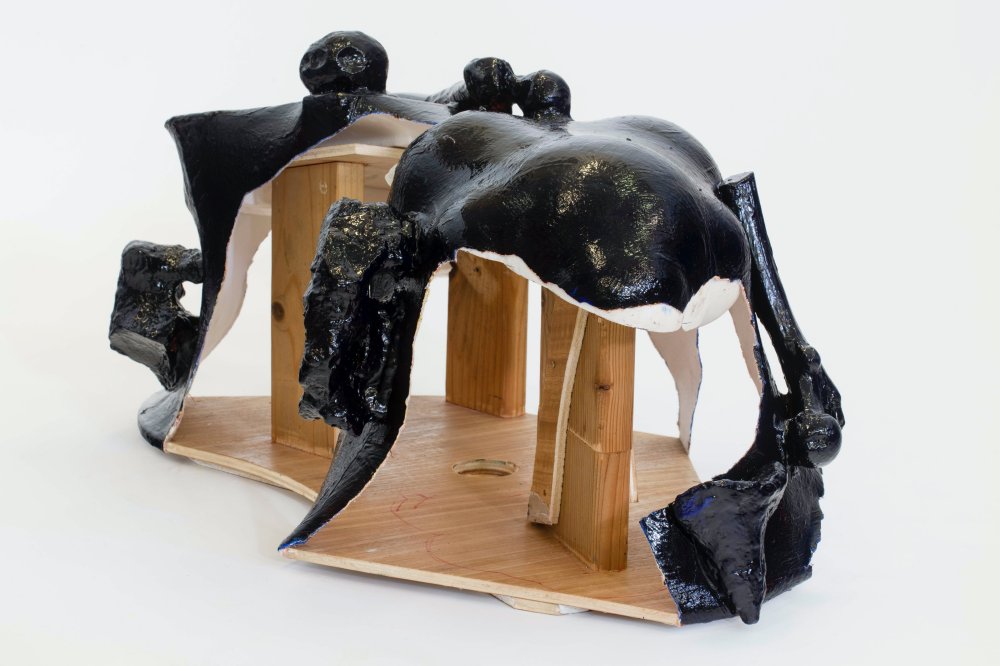 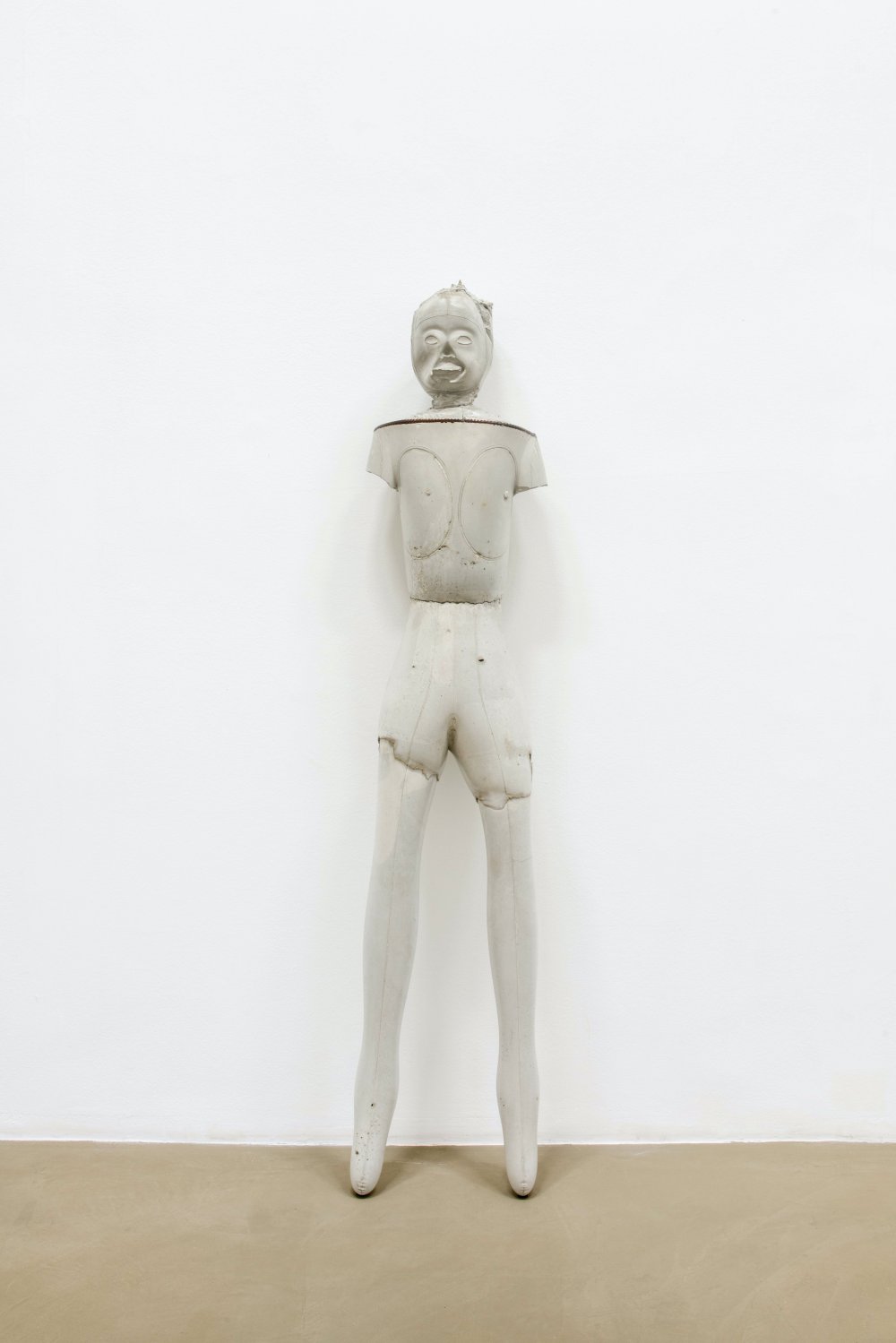 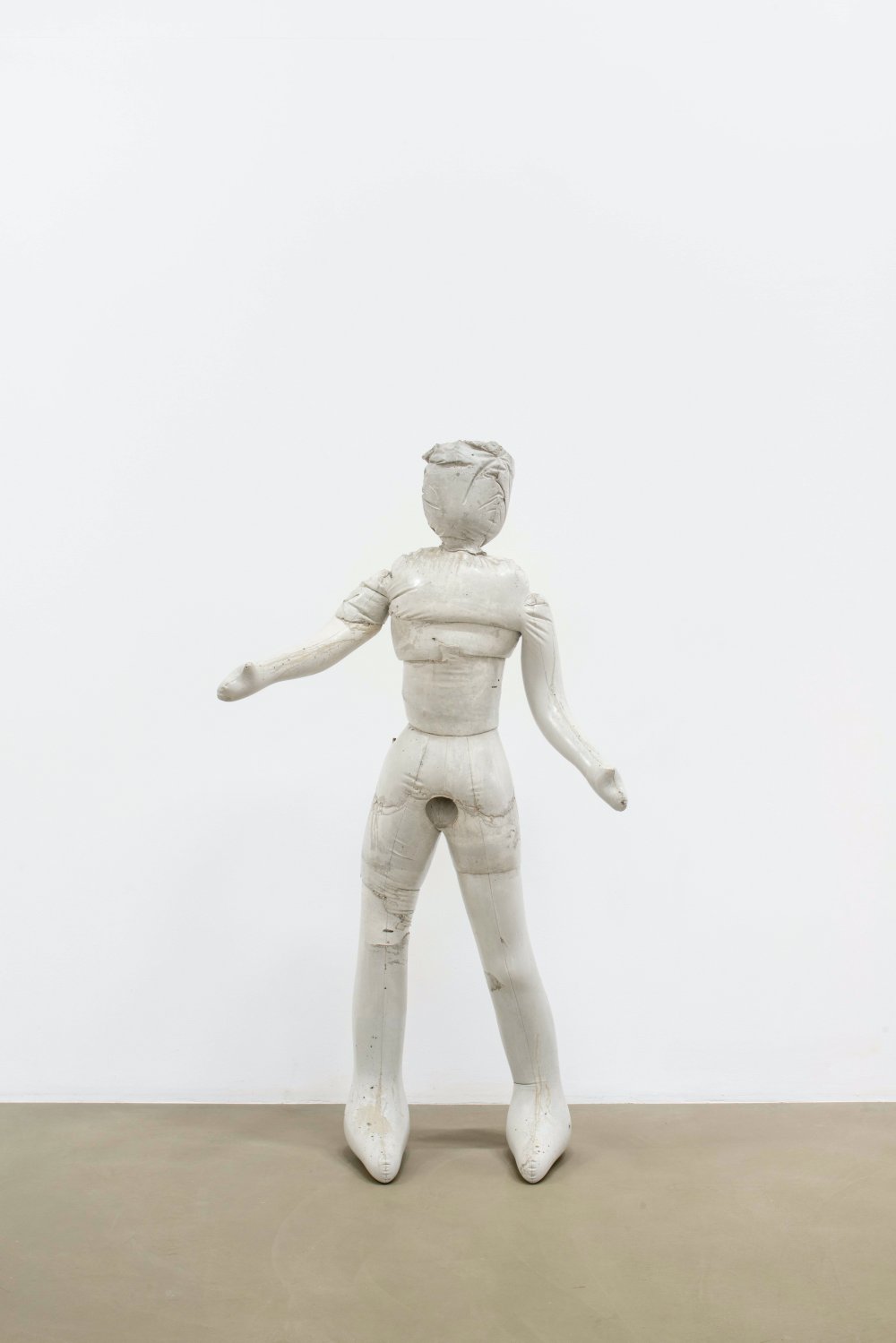 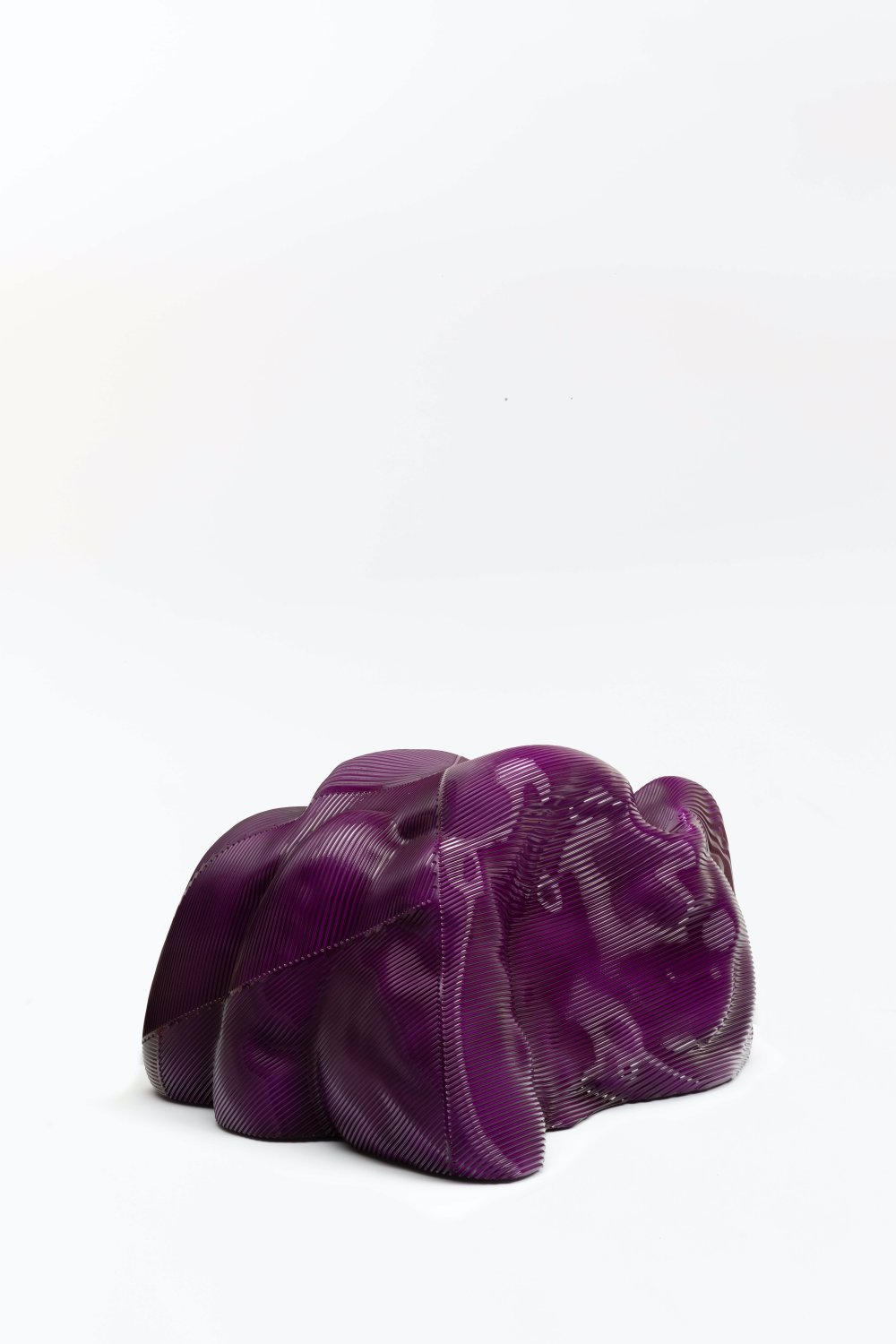 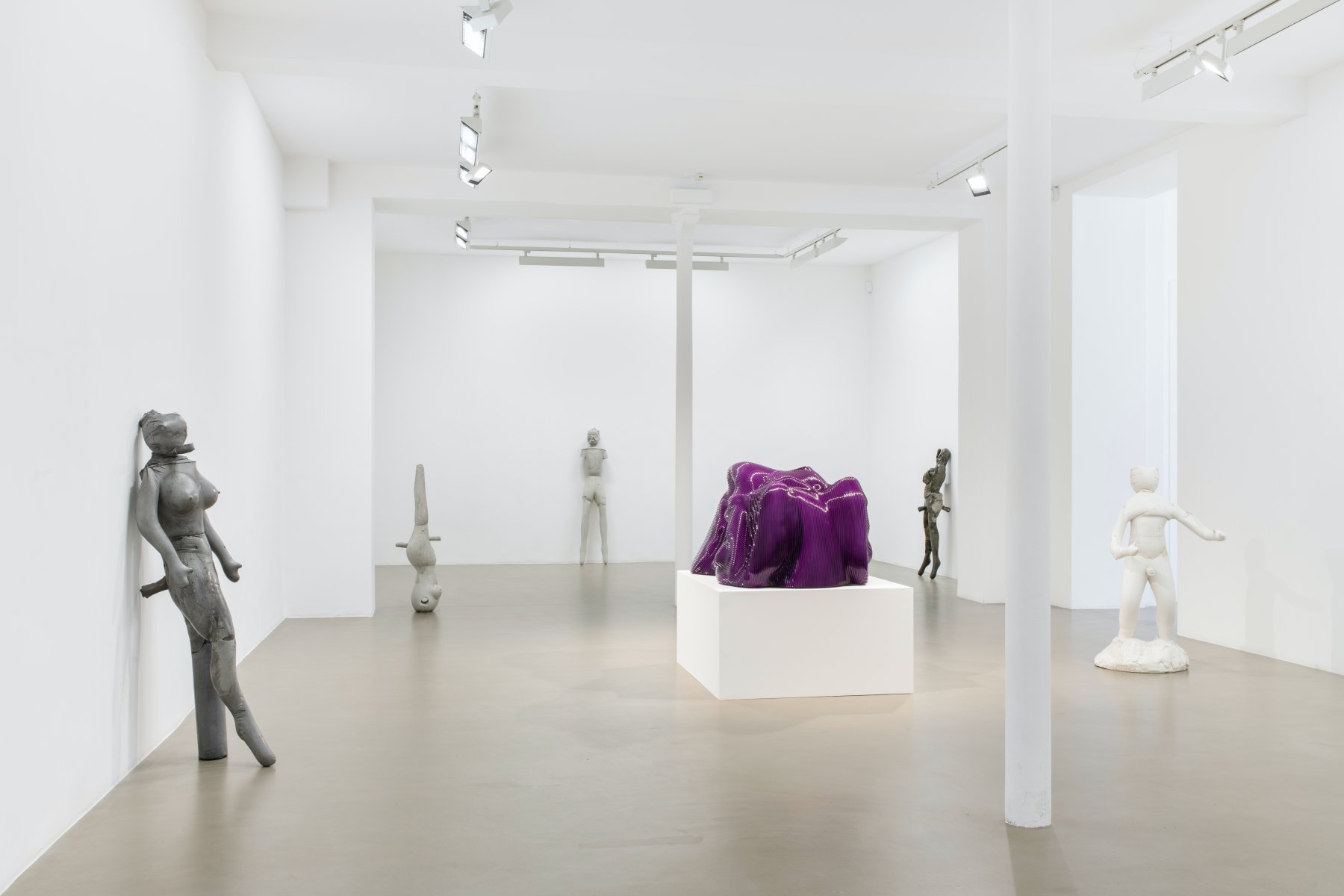 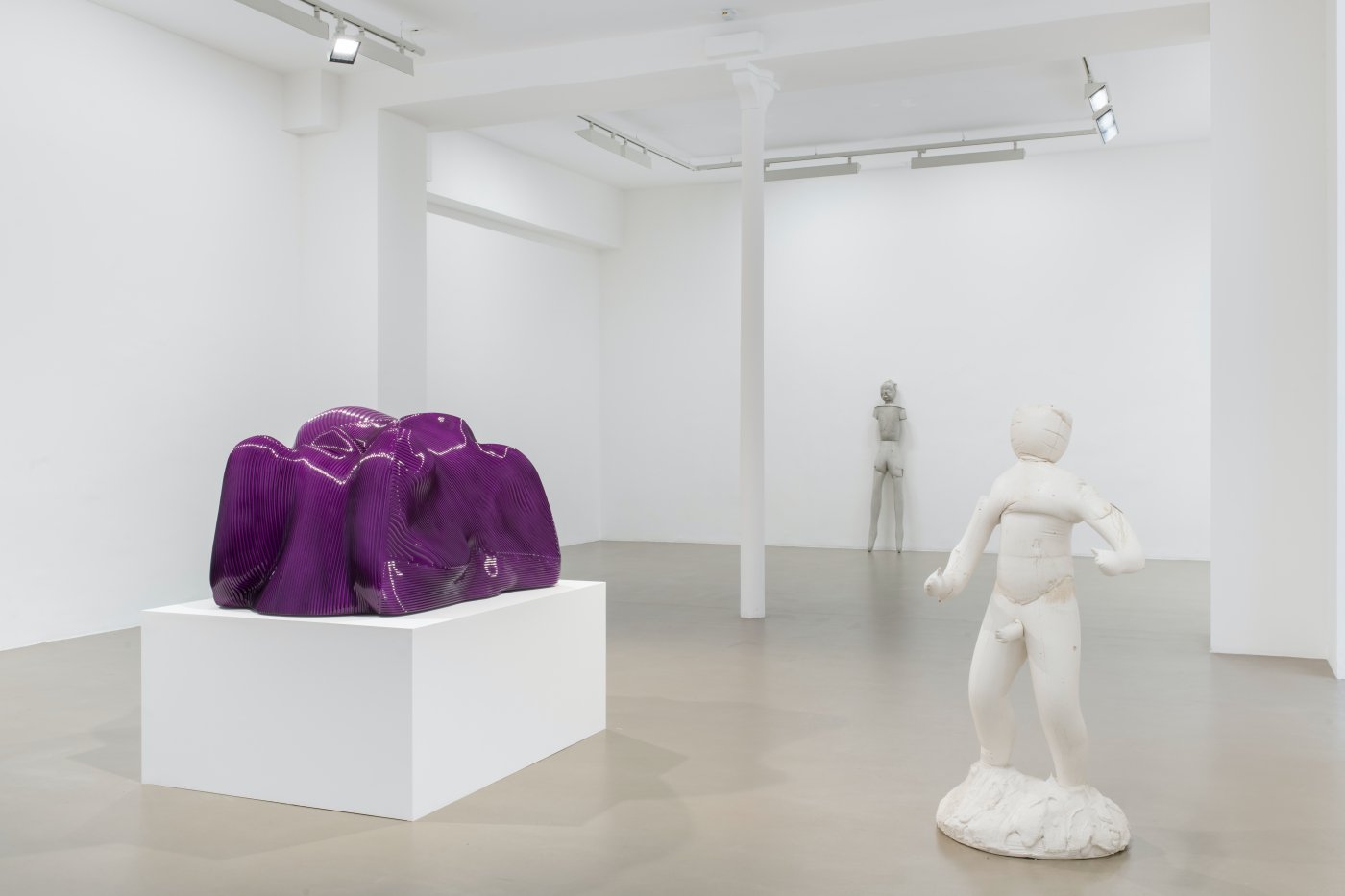 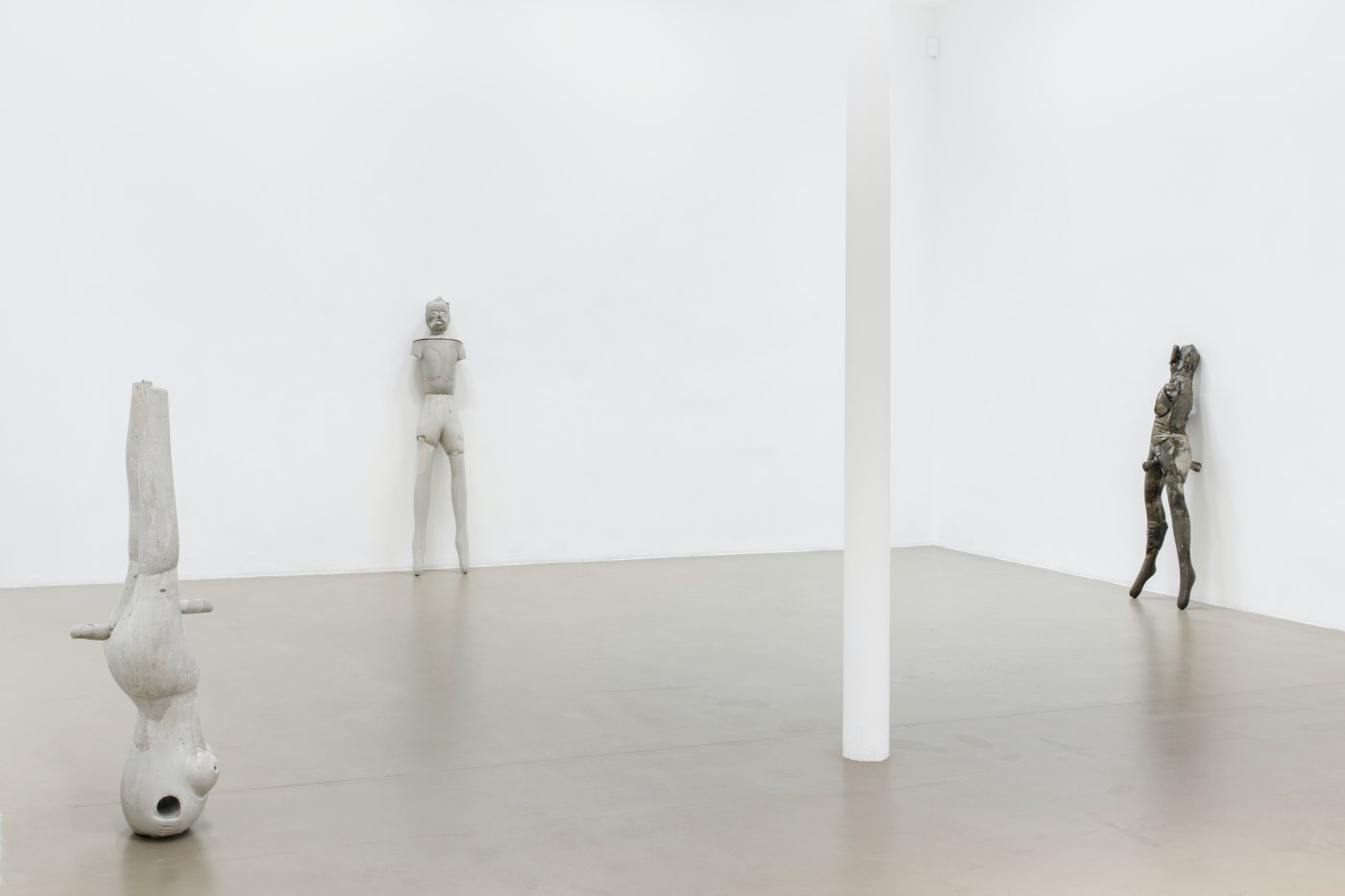 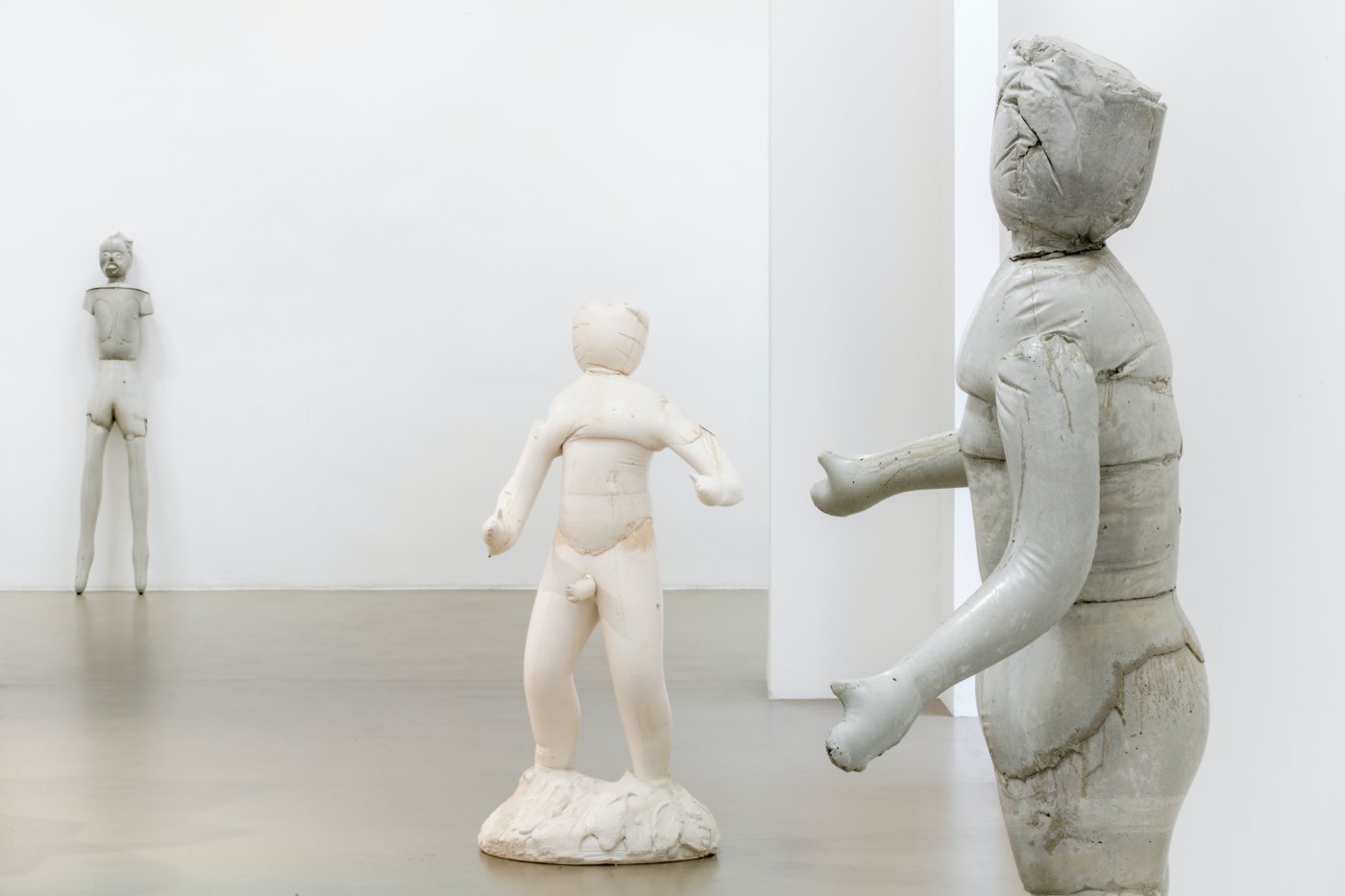 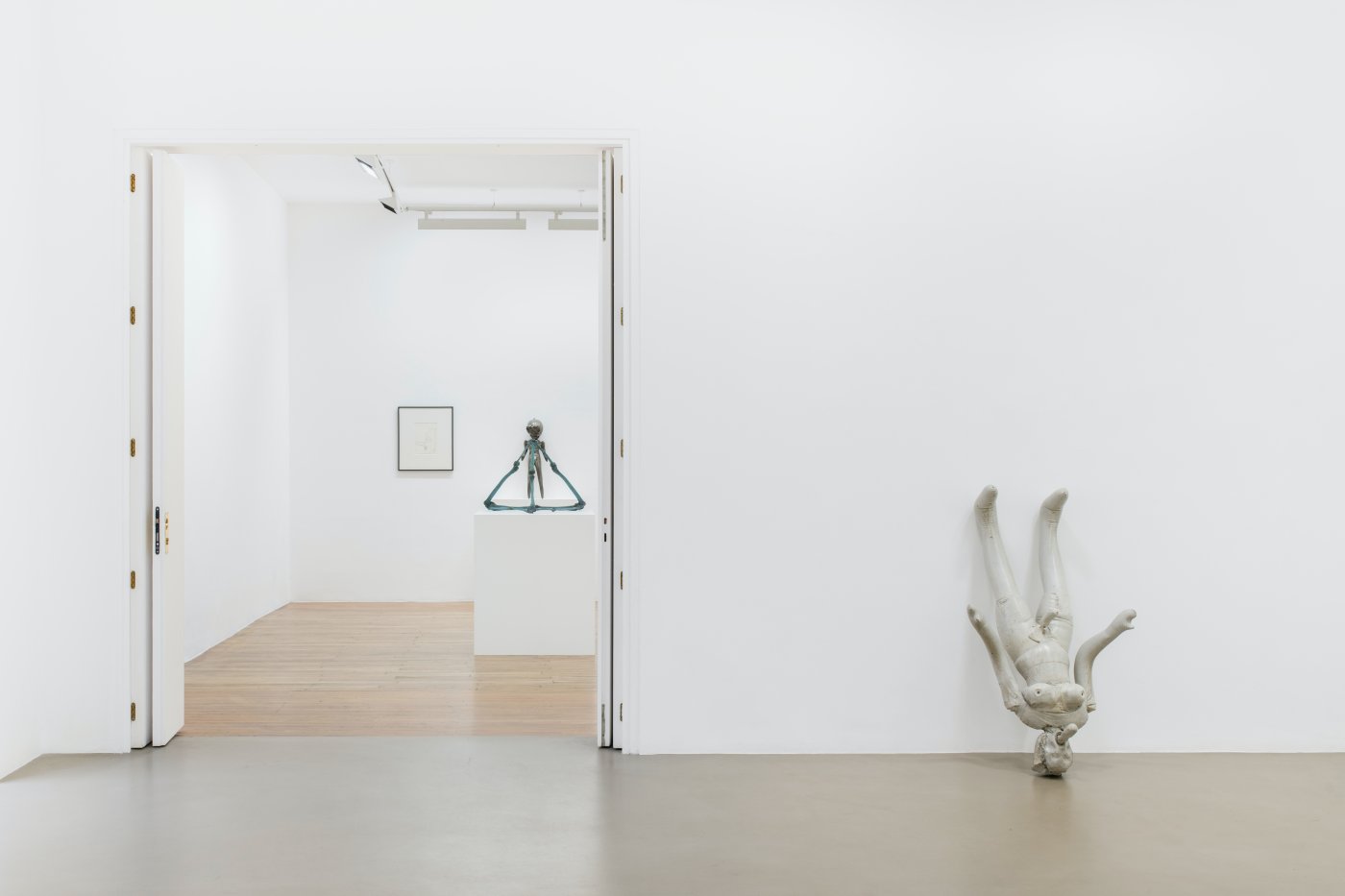 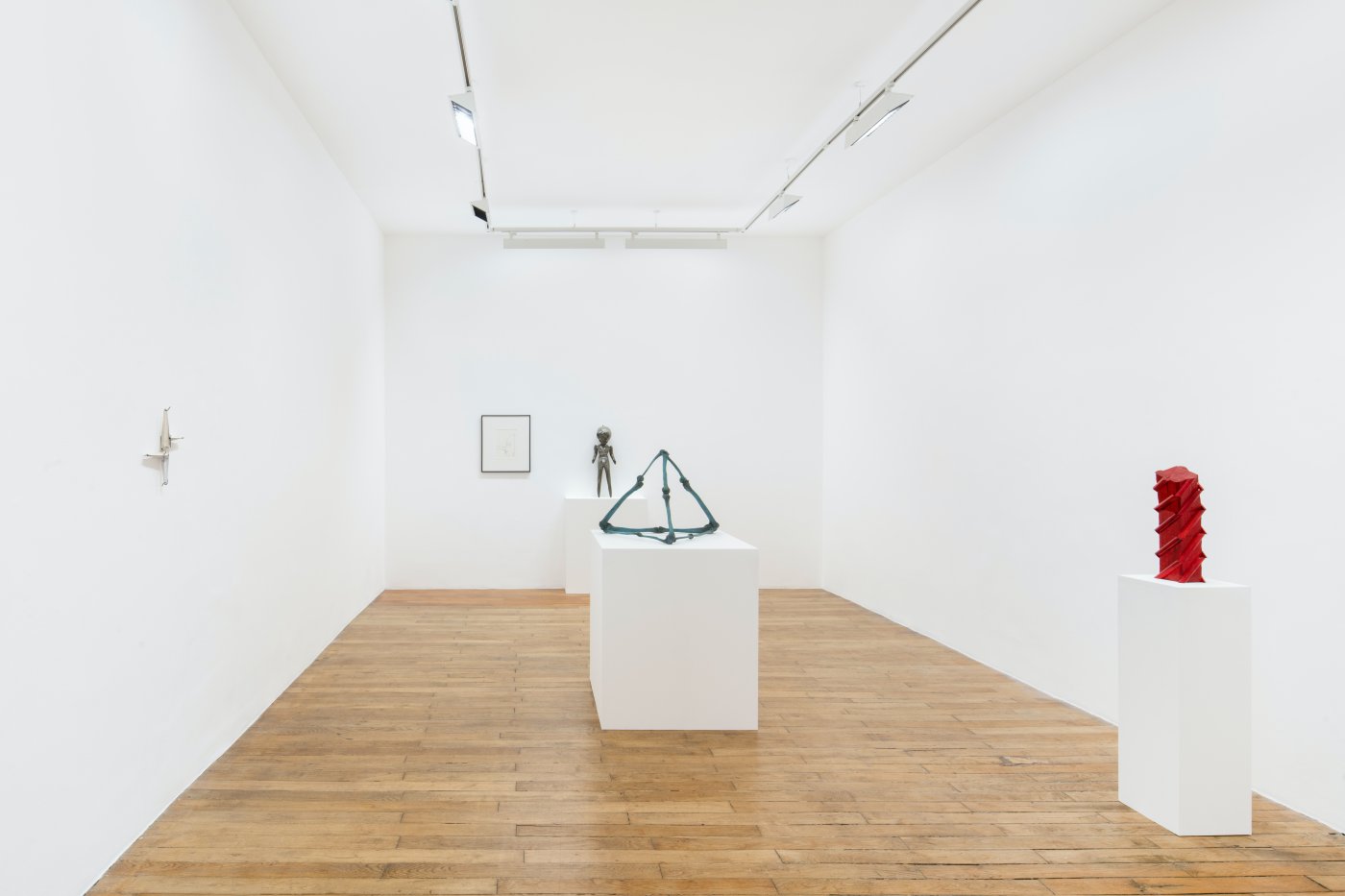 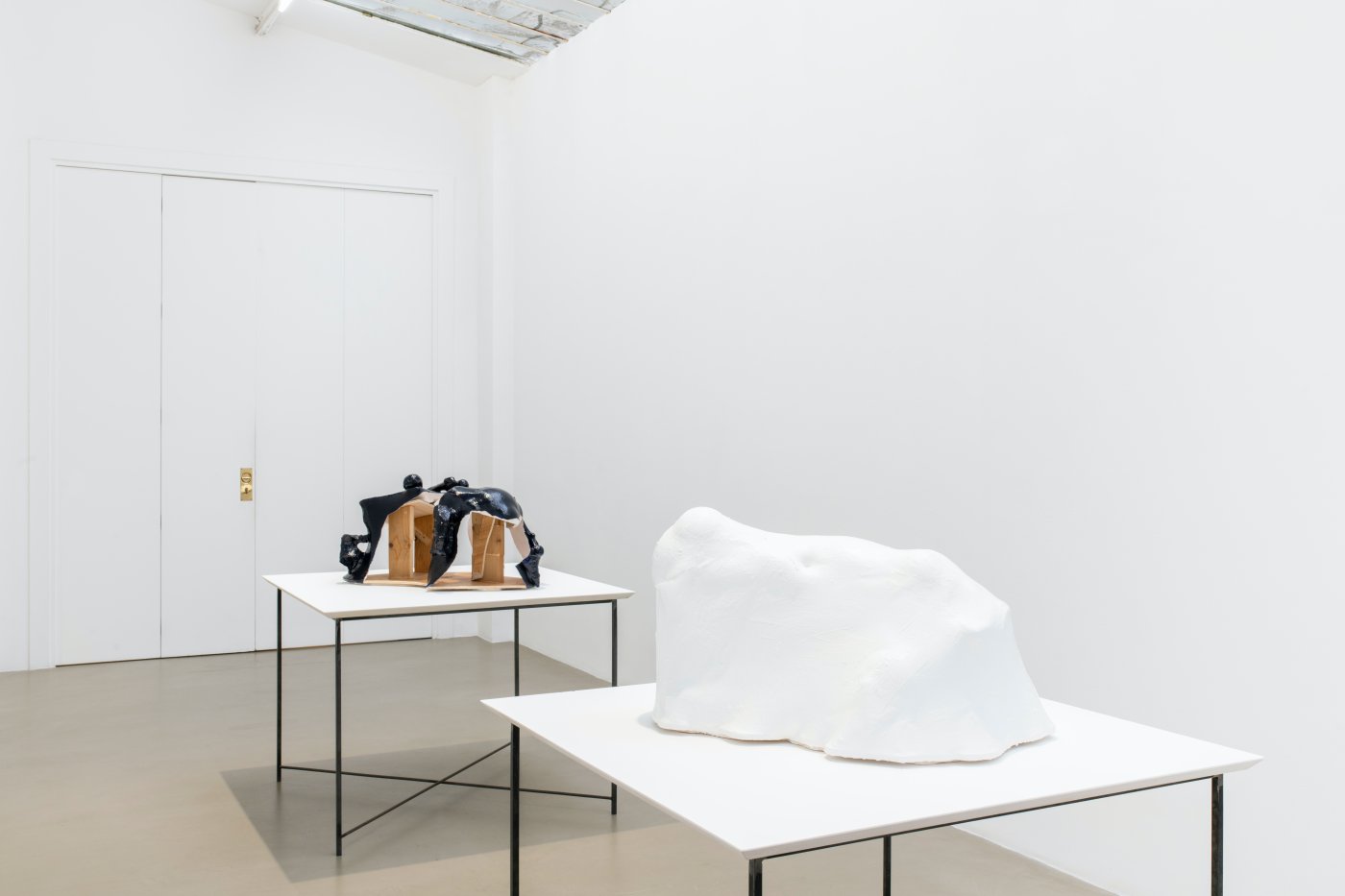 In the first room, the abstract object Montagne pourpre (2019) is put up upon its base. The fruit of 3D modeling turned out on machine-tools, this impressive hard-foam sculpture is a surface with body. Designed by the artist as a three-dimensional monochrome, the colored abstraction stands among a new ensemble of hand-crafted concrete sculptures entitled Implicites (2020). Grouped around the Montagne Pourpre and back against the wall, they watch from afar but, observers, the Implicites witness and observe their own interiority. Resulting from the same production protocol as the Tronches series (2014-2017) (1), the figures are upside-down and inside-out, interiorized then filled with concrete – effigies with distorted faces and bodies.
The concrete appears different from one sculpture to the next in terms of color (tones of grey) as much as surface (wax or epoxy). The bodies’ shapes and attributes burst out from their own erasing by the act of filling. This, in a sense, is a staging of sensitive existence.

At the heart of the second room, a bronze, totem-like sculpture is presented on a pedestal, Pyramid’os (2020). Here, the long bones of the human body both form the edges of a pyramid and delineate its surfaces, or rather absence of surface because its core remains empty. The joints, the articulations, become the peaks and cornerstones.
Pyramid’os shares quarters with a portrait sketch (Tronche, 2020) and various other objects including one small-scale Implicite (Redux Implicite, 2020) also back against the wall, opposite and eye-level with the pyramid.

Lastly, resonating with the above works, the third and final room to the side of the first presents three sculptures, two of which are large-scale abstractions placed on tables. Reiterating the formal issues raised by Montagne Pourpre, Montagne Blanche (2020) has a ‘quelconque’ (ordinary) (2), abstract shape, a large white monochrome still with traces of oil painting on its surface, each trace linking straight back to the visible gestures of the artist painting on canvas. A variation of this, Nature Morte (2020), is a relief painting too, a volume this time with realistic, non-covert parts, bones and stones.
“Abstraction […] is not simply a theme, a technique or a style, but an evolving protocol that enables thought to see the image of itself from the perspective of a matter that implacably stalks it.” (3)

To close, the two abstractions rub shoulders with one last sculpture positioned on a wooden beam, Yeux bleus (2020). From the observer viewpoint, this is an object composed of two stones found and glued together by epoxy paste. Spread over the top are hundreds of nazar boncukları, small, traditional, Turkish glass amulets designed to protect against the evil eye —tipping the wink one could say at the ‘quelconque’ abstraction shown at the 2019 Venice Biennale (Pale Blue Eyes, 2019)— which seem to proliferate and look around, eyeing as much the sculptures as the visitors.

As Philippe Vasset said so well, I like “to linger in Jean-Luc Moulène’s exhibitions: full of puzzles and suggestive details, they are real fantasy machines.”(4)

(1) Jean-Luc Moulène worked on the Tronches series from 2014 to 2017. They are latex Halloween masks the artist turned inside out and poured concrete into. Once dry, the latex is removed and the concrete waxed, then the mask placed on a cover for exhibition. The concrete is hence grey or colored. The artist exhibited an ensemble of Tronches in his solo exhibition at the Villa Medici in 2015.
(2) The French term, “quelconque” designating an unsurprising ordinariness with no one-to-one translation, is often part of Moulène’s vocabulary. It refers to “ordinary” shapes or things of which we know neither the structure, composition nor transformation.
(3) Reza Negarestani in “Torture Concrete: Jean-Luc Moulène and the Protocol of Abstraction”, Sequence press editions, New York City, U.S.A., 2014, p.5.
(4) Philippe Vasset: in “Un rituel sans liturgie” (ritual without a liturgy), Jean-Luc Moulène exhibition catalog; publ. Centre Georges Pompidou & Dilecta, Paris, 2016, p.108.