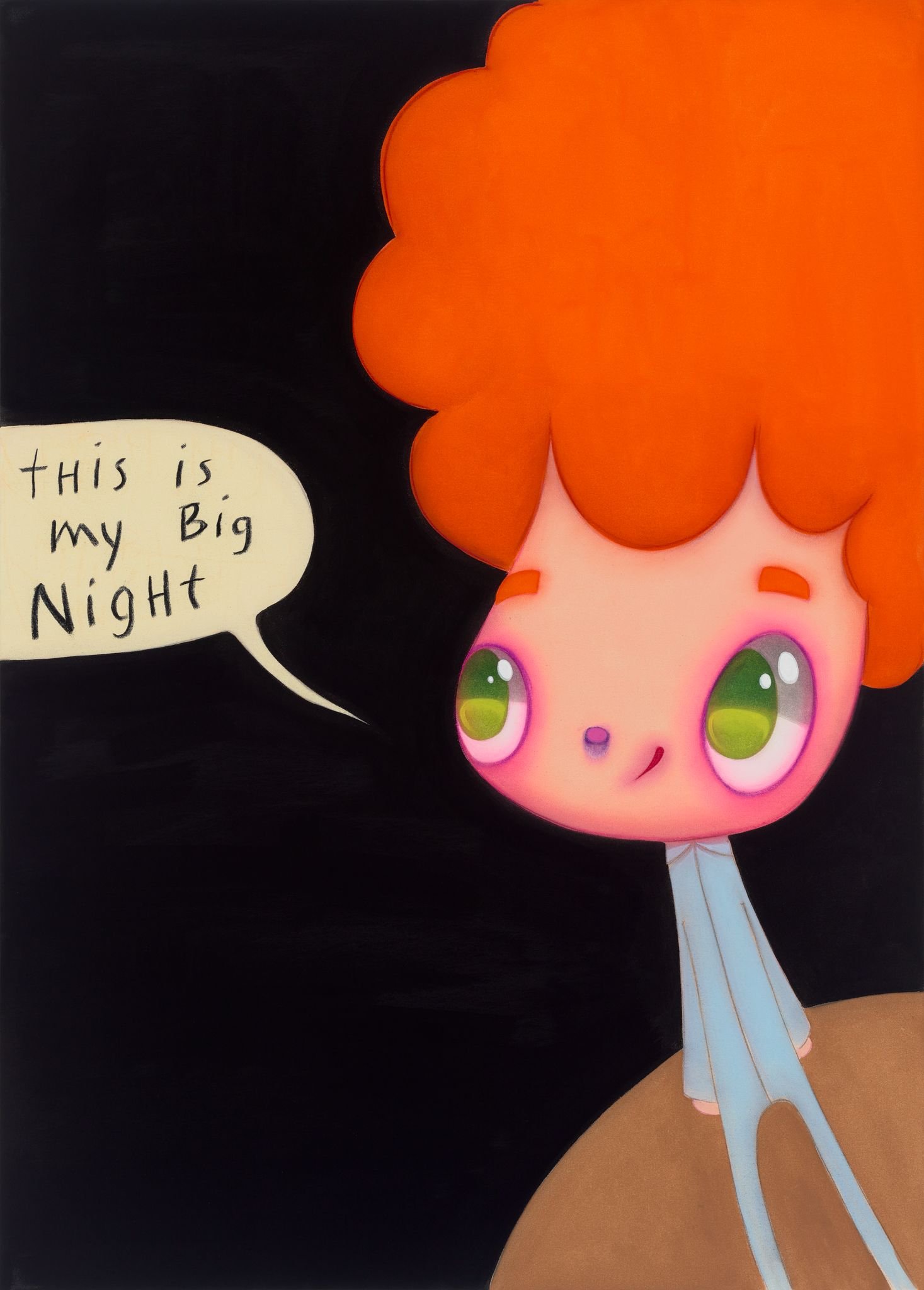 Existing in seemingly disparate spheres and utilizing unlike approaches and techniques, the works in this presentation are aiming to create a challenging dialogue and point at the latent connections between pop and conceptual, especially in the context of giving prominence to language within art.

It’s a little know fact that Javier Calleja’s emblematic characters evolved through experimentation with drawings and the use of non-traditional materials. Starting from the minimalist concepts in which simple pictorial elements were often contrast-ed against concise textual components, the work was from the beginning consciously revolving outside of traditionally set parameters. In particular, it was the two drops of water resting on a paper surface that prompted the artist to start working with oversized watery eyes, building his entire artistic universe from such a primordial base. And as if continuing the mitosis-like expansion, the new body of work that the Malagan artist is developing is shifting the focus outwards from the protagonist itself, attributing the surrounding elements with similar, almost principal qualities.

After years of revolving his drawings, paintings, and sculptures around the expressive faces of his big-eyed muses and witty texts on their shirts, the recent series of drawings and paintings compromising Calleja’s current exhibition are giving the textual aspect of the work a more pronounced position. In a way removing it from the pictorial sphere of pop-art aesthetic and back to its formal use and purpose, they are slowly becoming characters on their own, while being reduced to nearly pure information or idea at the same time. So instead of drawing or painting a scene or emotional landscape, the work can be seen as tautology about a certain actuality, in which the pictorial elements are used to further accentuate, question, or undermine it. At the same time, this approach allows for the elaboration of the characters, which are now depicted as full figures and with greater attention to the glowing blush of their telling faces.

With such exaggerated use of overly cartoonish aesthetics, Calleja is somewhat exploring or challenging the nature of art rather than working within what is traditionally considered “art”. In a way downplaying the art object and questioning its inherent nature, he is taking a very different route toward an arguably similar field in which conceptual art-questioning work exists. In extension to this, the paintings on canvas comprising his second solo presentation with the gallery in Shanghai are mimicking the classically framed drawings on paper, emphasizing the untouchable feeling of gallery or museum displays. Creating a sense of fabricated importance as well as artificial timelessness, the use of darker backgrounds gives these undoubtedly pop images an aura of seriousness while emphasizing the full figure as the newly used element in the work. As part of Calleja’s ongoing play with scale and perception, the oversized wooden frames and fittingly magnified Passepartout backings are reducing the appearance of the canvas to a drawing-like quality while elevating or even parodying the overall sanctified distance between the art and the viewer.