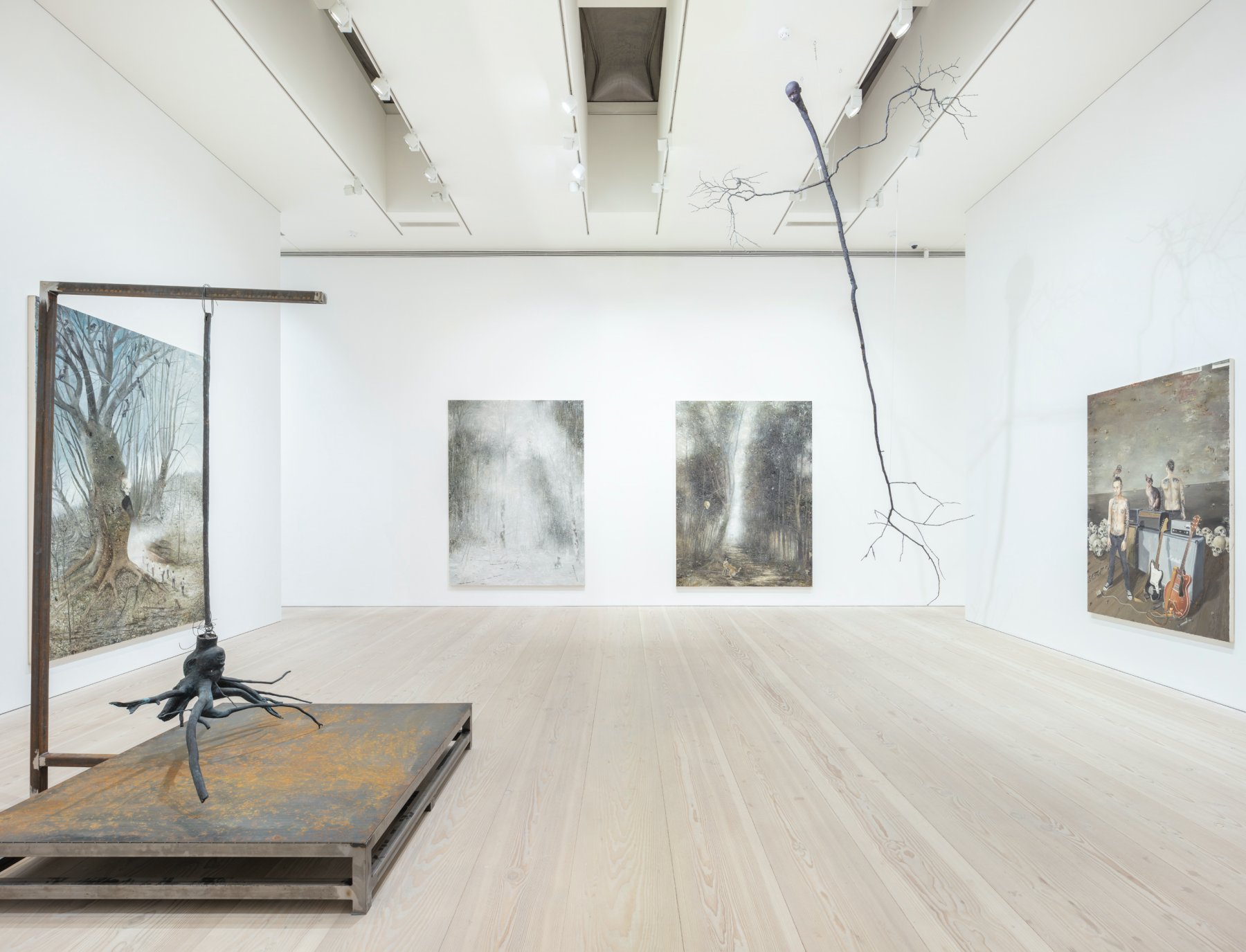 Jarmo Mäkilä (b. 1952) has spent the past few years immersed in childhood’s imaginary landscapes. In this new exhibition, he reflects on the end of childhood, asking whether childhood ever truly ends or whether the child lives on, hidden inside the man. Mäkilä reflects on what manhood ultimately means, asking when, exactly, boyhood’s innocence is displaced by the burden of manhood.

The paintings in his new exhibition depict contrasted locations with different emotional resonances: open forests and confined interiors. The forest is the bedrock and spiritual home of Finnish mythology. It represents boundless freedom – an open domain where boys escape the watchful gaze of the mother. They return as young men and look upon their childhood home from afar as if observing a world lost to them.

By contrast, his interiors are constricting. Mäkilä paints strong, sturdy men in lyrically brutalist, dream-like places, whether taking jabs at a punching bag, flexing their muscles, or displaying tattoos like a victory sign – flaunting classic symbols of masculinity. Mäkilä presents us with mythical images of manhood, telling the story of boys growing into men and letting the narrative unfold with the mythical force of ancient legend. The viewer, too, is gripped with the desire to pound a punching bag, tattoo their life story on their skin, and feel the life force pumping through their veins. Each one of us has a story. Each one of us is unique.

All the paintings in this new exhibition have one feature in common: the power to inscribe a narrative in the viewer’s mind. Every detail appears to have a deeper significance than is visible at first glance. A hidden world lies concealed behind what we see on the canvas. The artist poses the questions: Are boys just boys or children? Can a man ever be just a human being?

A trailblazer who has followed his own artistic path throughout his career, Mäkilä ranks among Finland’s most accomplished artists. He has exhibited widely worldwide and held solo exhibitions at venues including the Amos Anderson Art Museum, Helsinki City Art Museum HAM, Sara Hildén Art Museum, and Pori Art Museum. He was the first Finnish artist to hold a solo show at the Museum of Contemporary Art Kiasma in 1998. Mäkilä received the Pro Finlandia medal in 2002.