Yancey Richardson presents Time and Materials, an exhibition of new work by Jared Bark. Featuring sculptures and collages made from found materials related to recreation, leisure time and nature, the exhibition weaves together Bark’s childhood preoccupations with his interest in history and metaphysics. 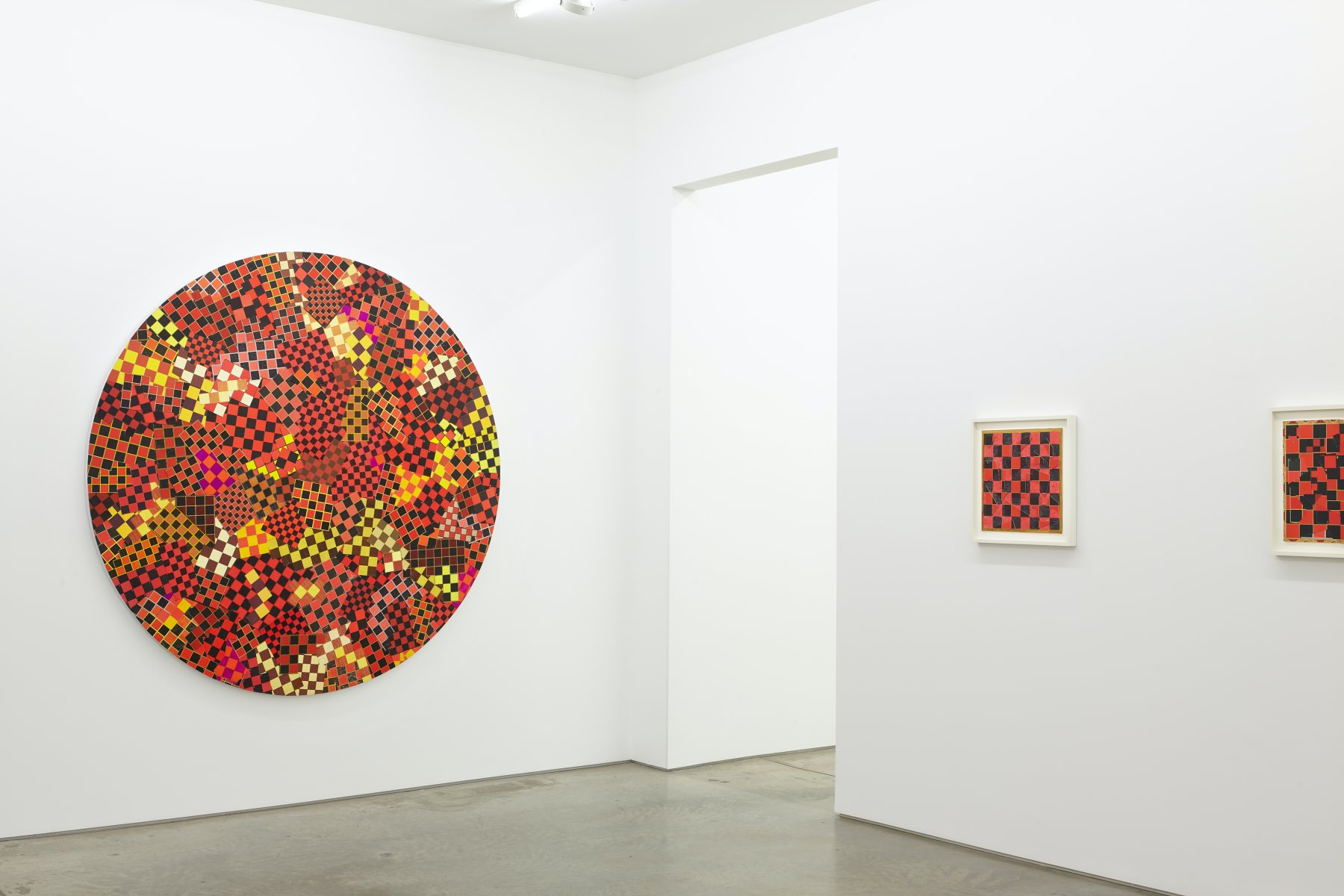 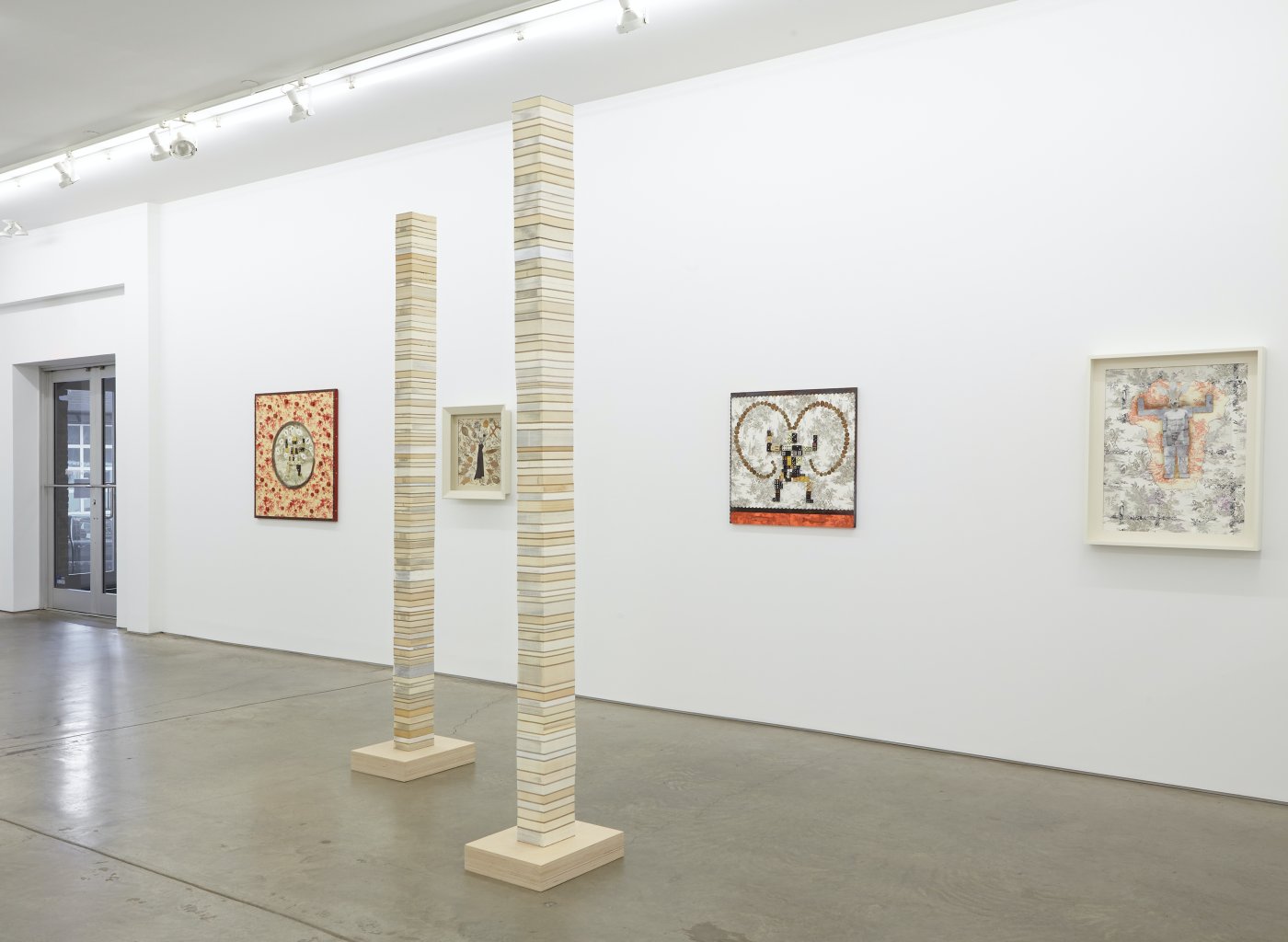 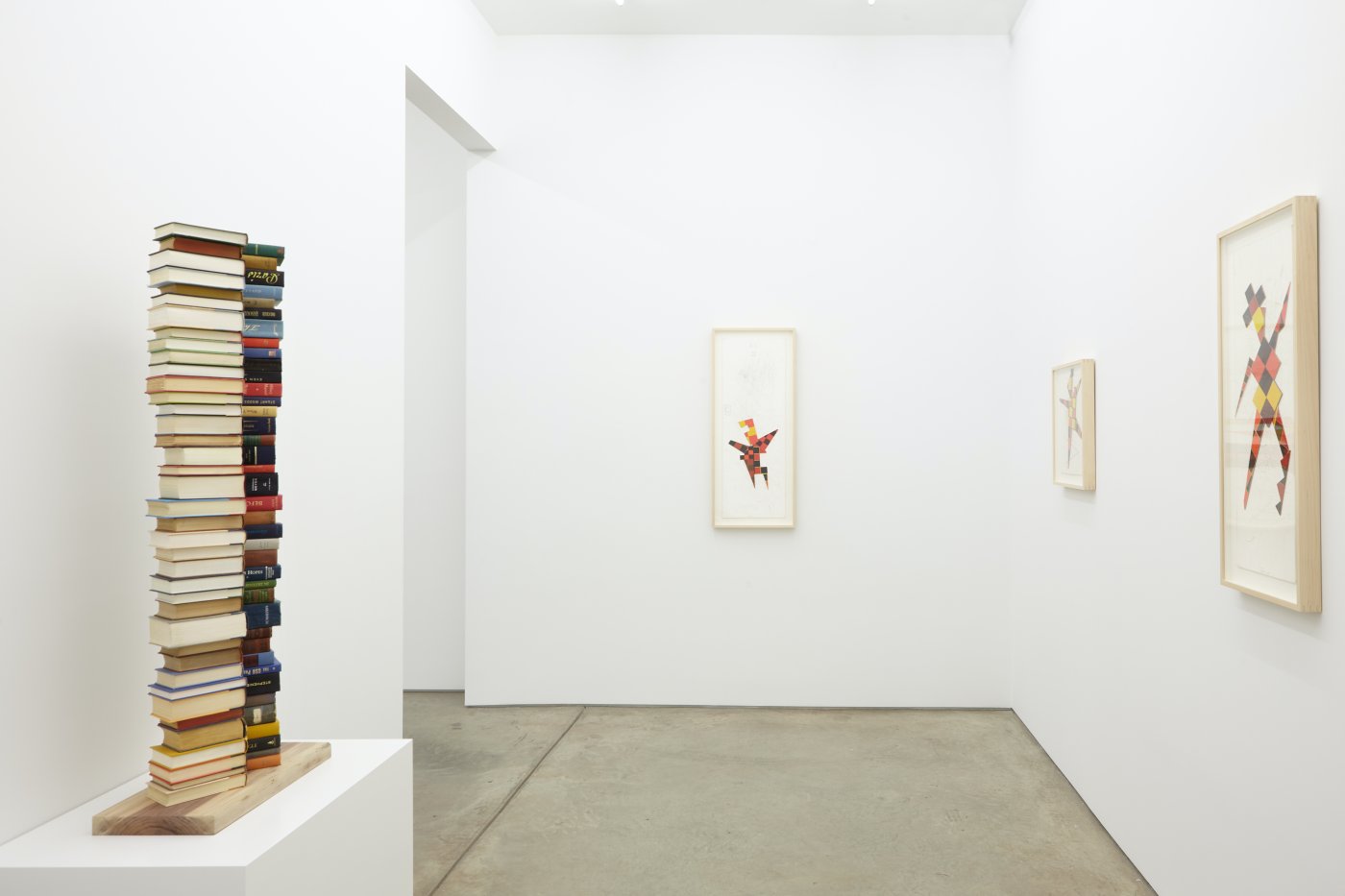 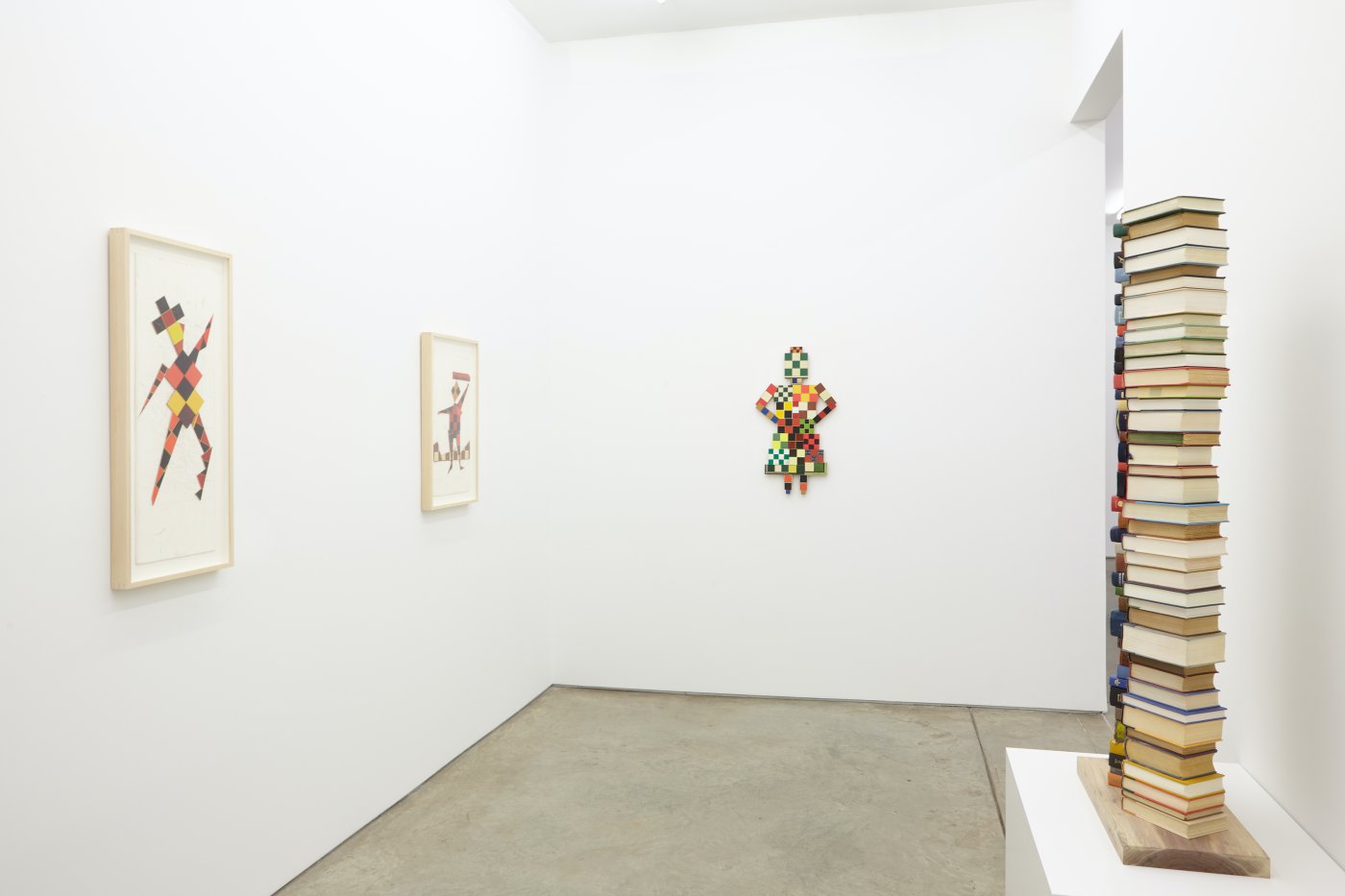 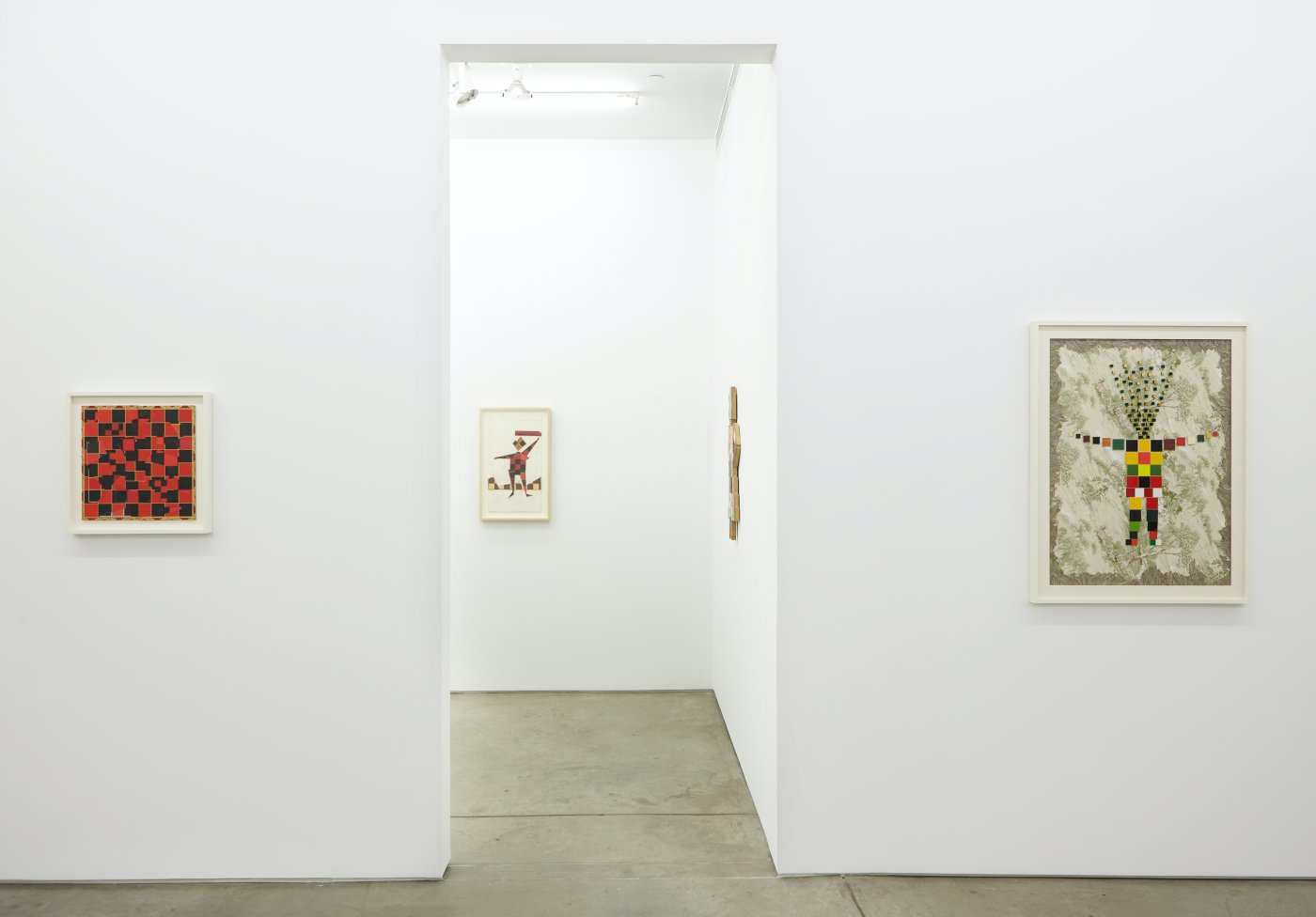 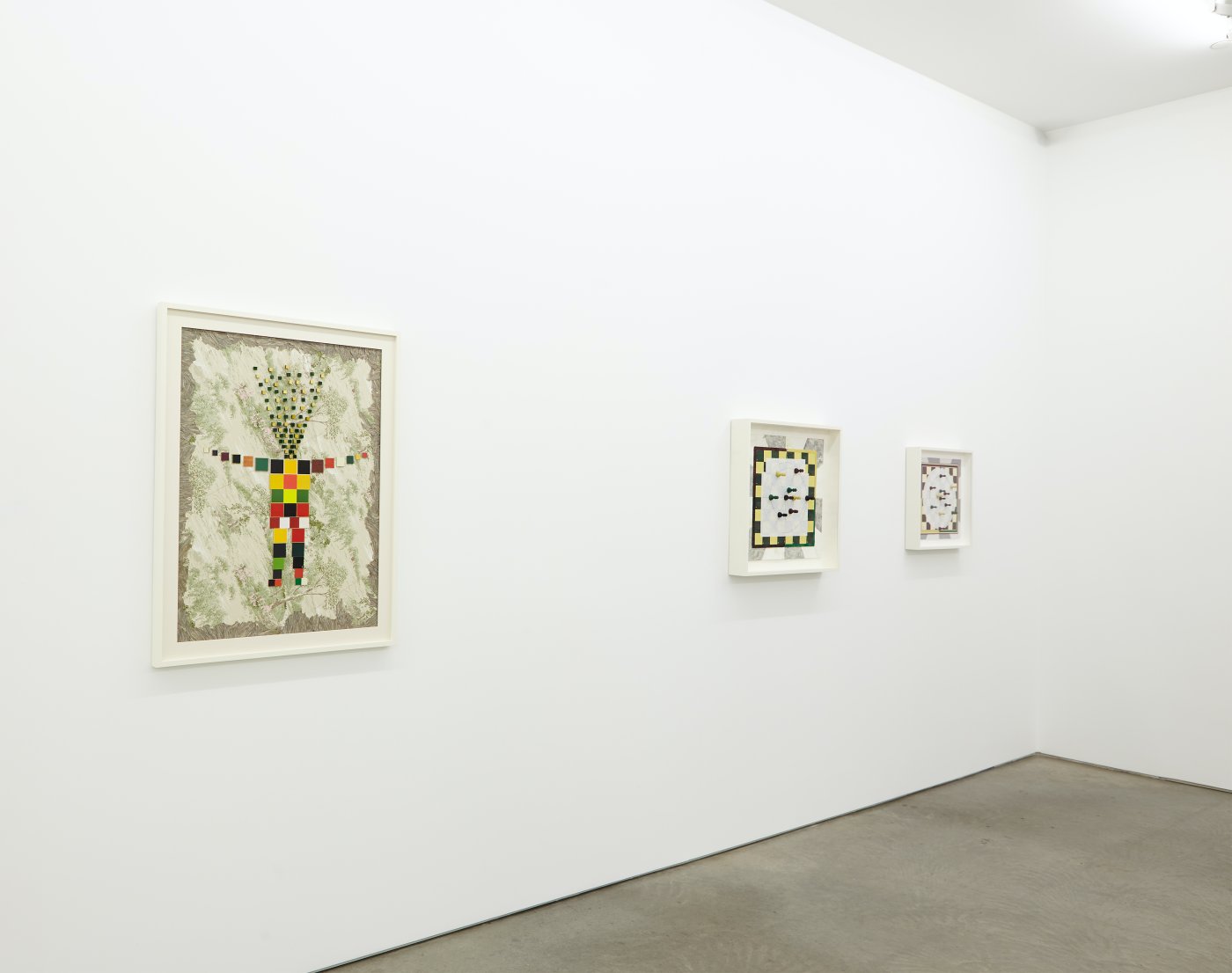 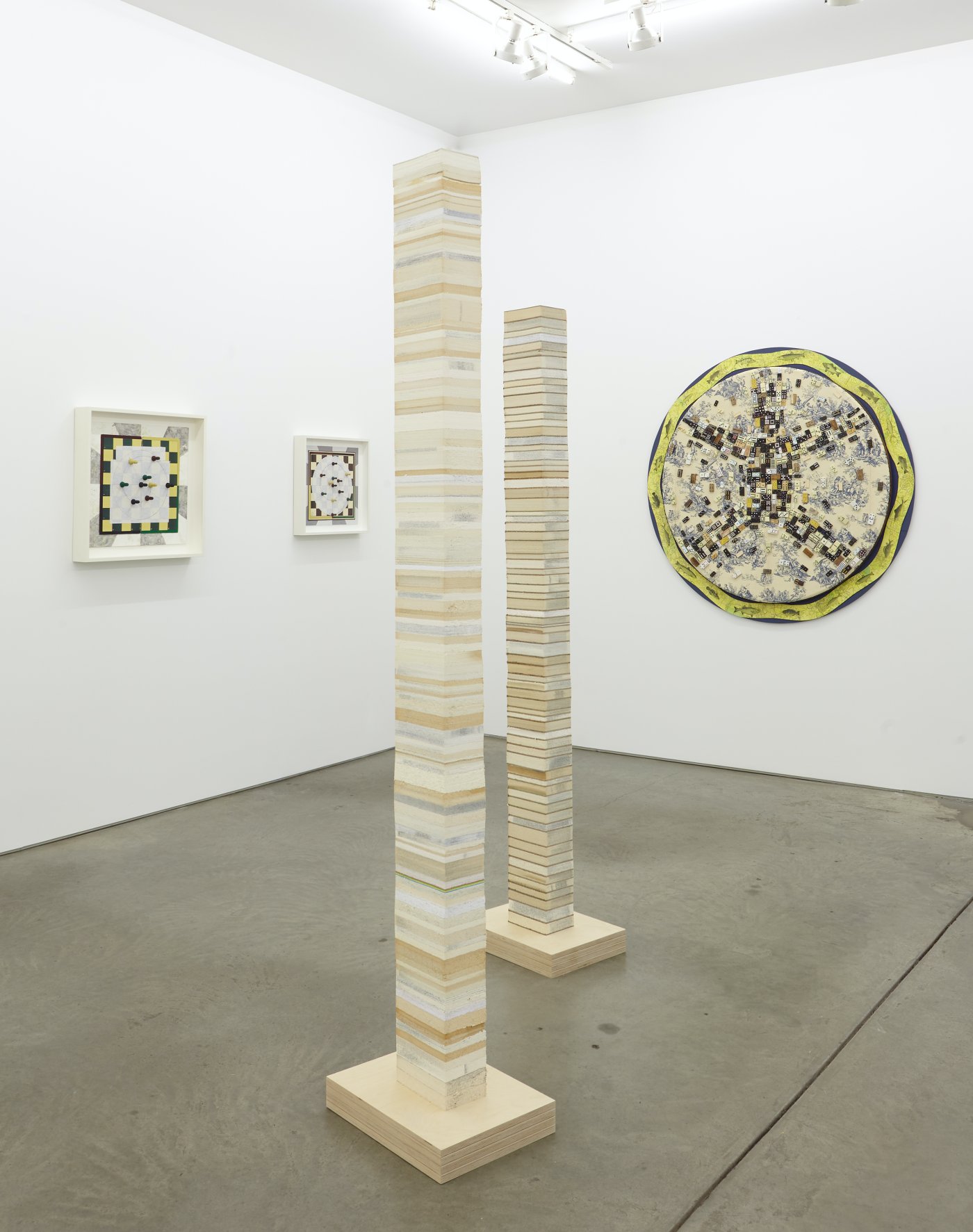 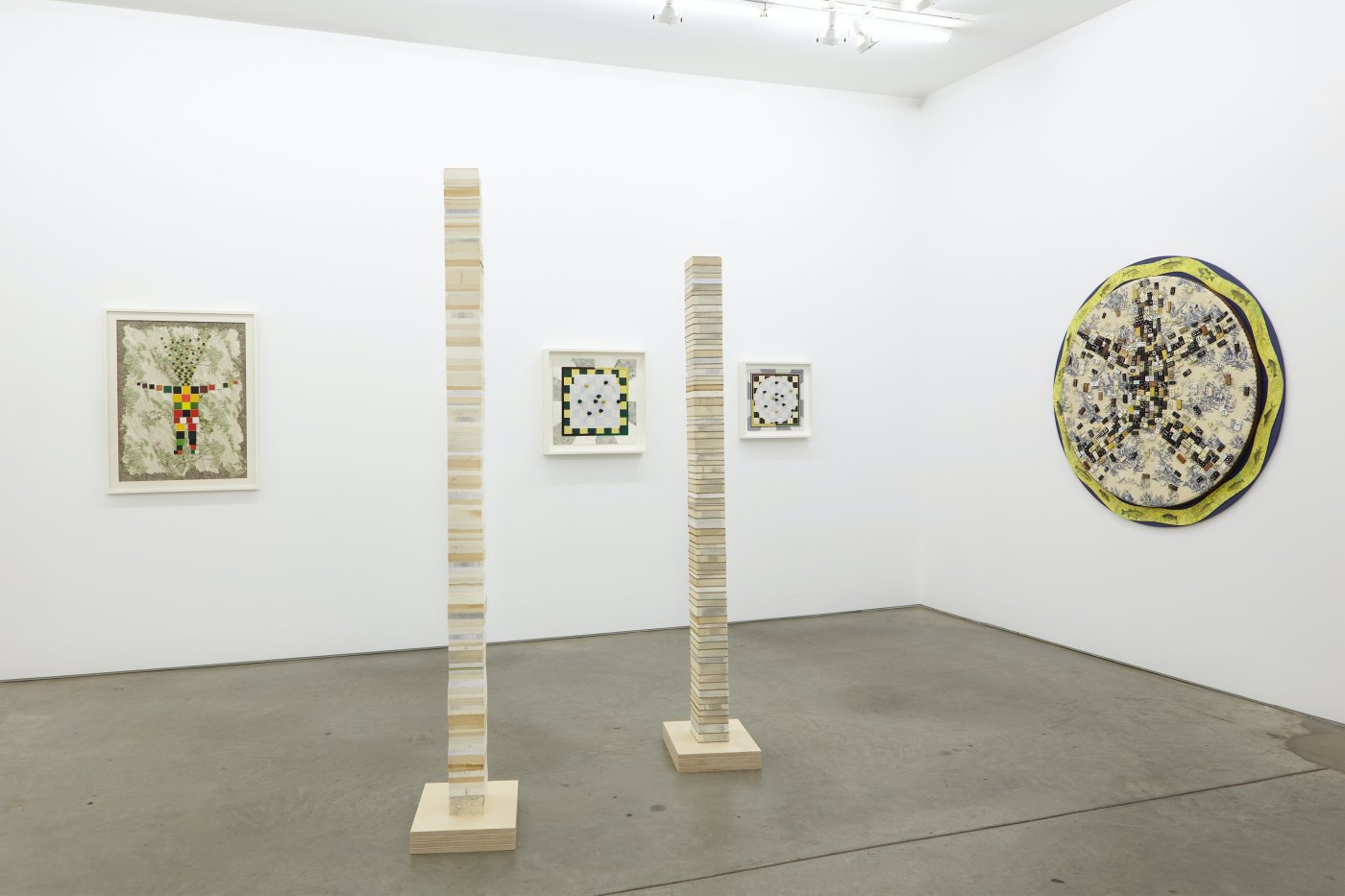 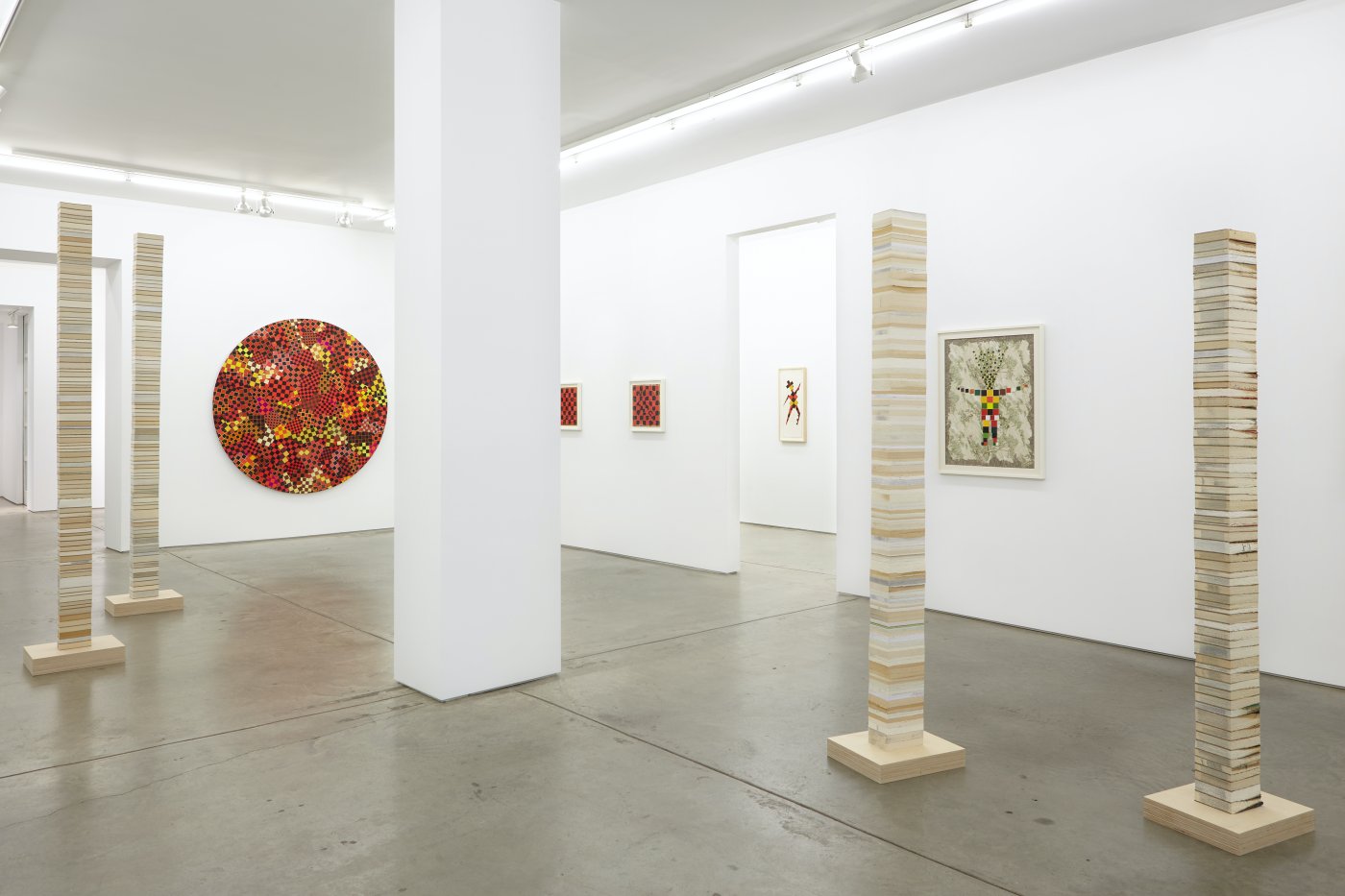 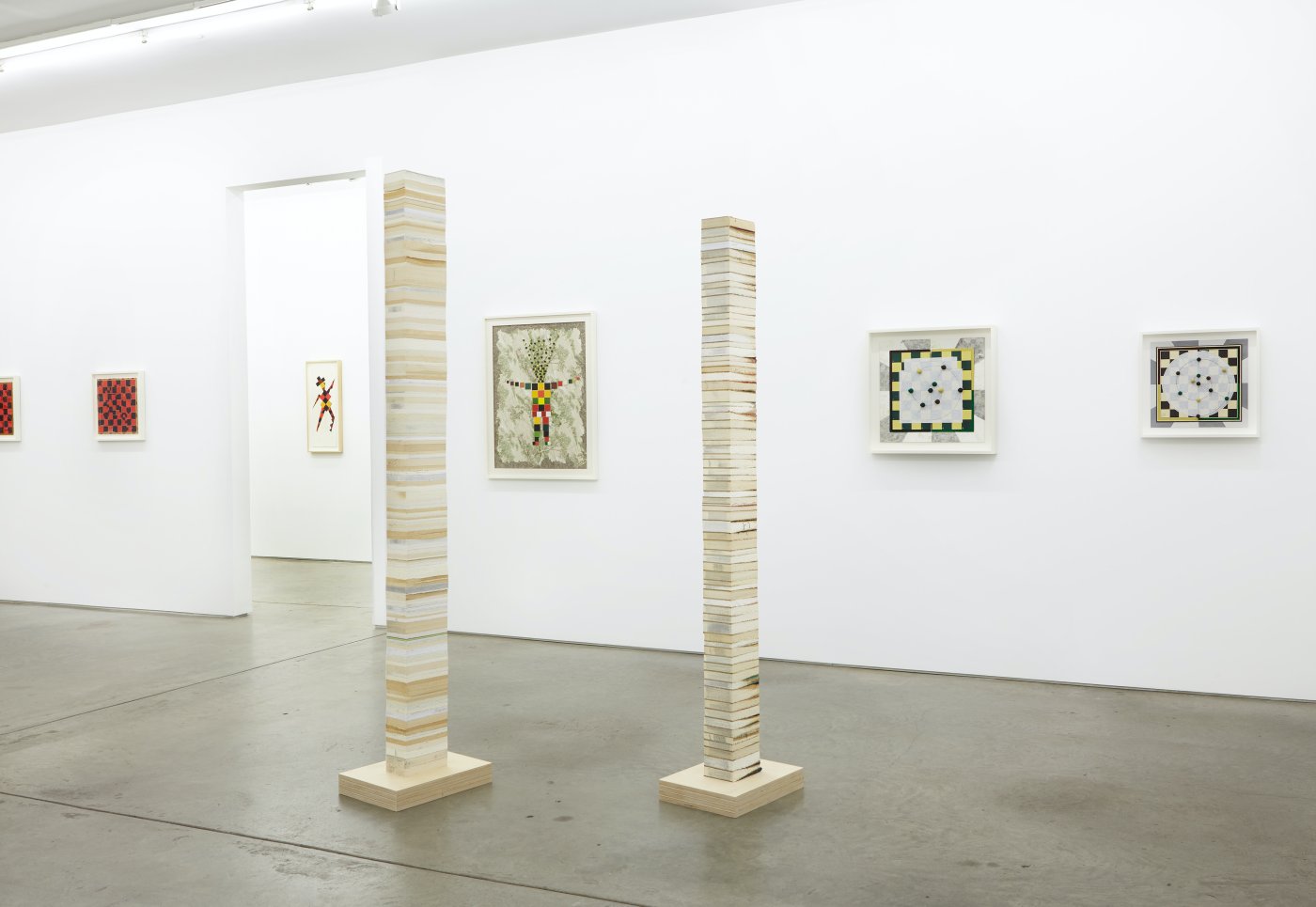 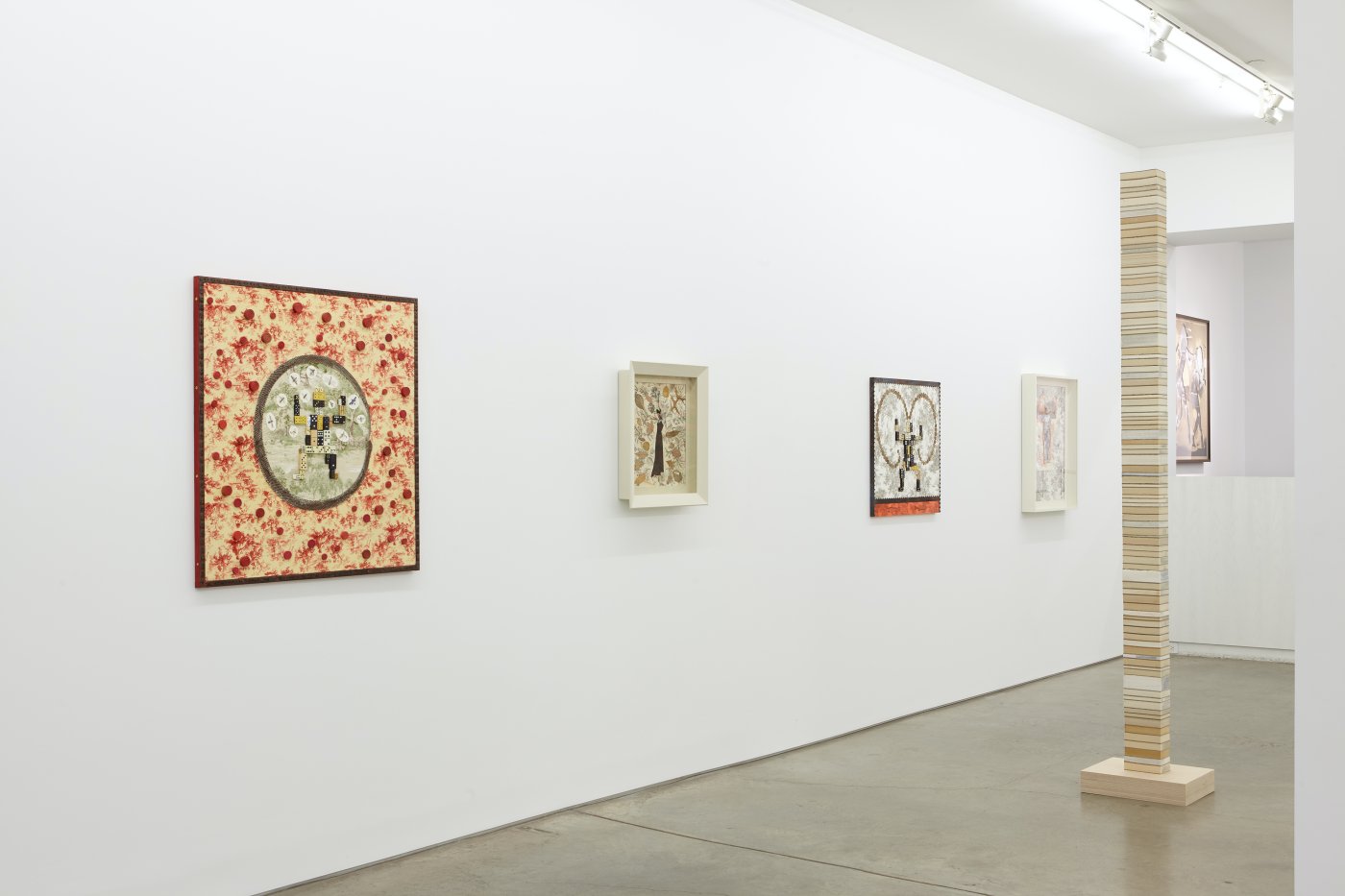 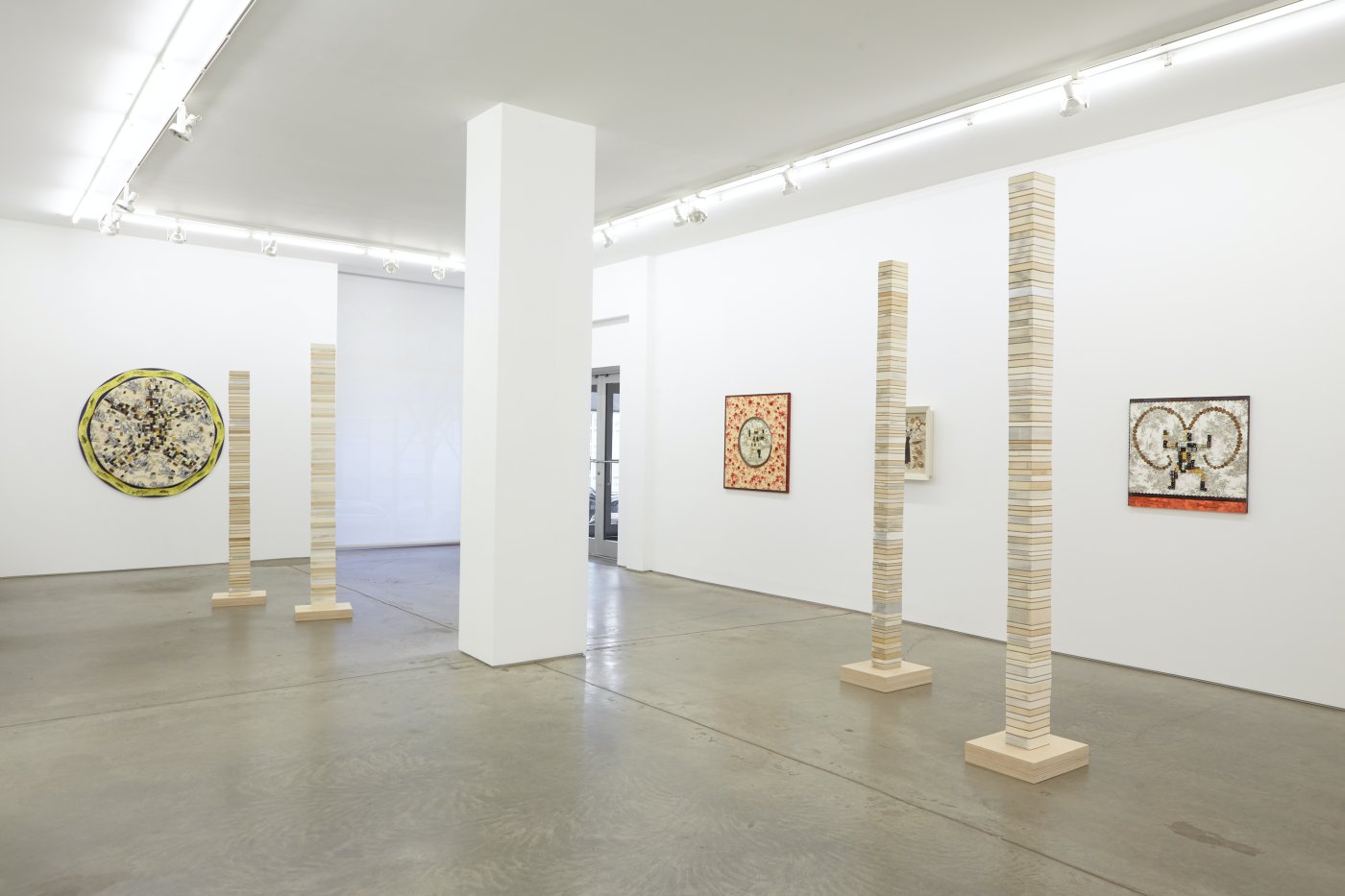 Through the use of familiar materials like books, game boards, dominos, old-fashioned wallpaper, insect nests and pressed leaves, Bark revisits the tangible pleasures of his adolescence in a pre-digital world, offering an antidote to our technologically driven, screen-filled lives.

Bark’s collages often employ the pastoral scenes of toile wallpaper as a background environment for elemental beings inspired by his interest in alternative belief systems like Animism, Anthroposophy and Theosophy. Formed from dominos or chess board squares and arranged in simple, pictographic poses, these nature spirits are surrounded by elements drawn from games, reading and the natural world including checkers, illustrations of insects and swimming fish, dried snakeskins and pressed eucalyptus leaves gathered on trips home to California. For other works, the static regularity of a gridded game board offers the opportunity for disruption. Gameboard I and II are dissected and reconstituted within their square perimeters in an intervention that renders them unplayable. Elsewhere, triangular pieces of patterned board form a series of dynamic, gesturing figures. In the large-scale work Spanda Tondo, Bark has cut apart brightly-hued chess and checkerboards and recombined them, creating a kaleidoscopic disc of color, pattern and energy.

In his ongoing series of Book Cants, Bark constructs vertical stacks of books that are then trimmed in a sawmill on all four sides into a cant, a term for a partially sawn log with at least one flat side. Measuring from seven to nine feet in height, the slender verticality of the sculptures reference both the trees from which paper is made and the ancient freestanding columns Bark experienced in Pompeii. By eliminating the colors and graphics of the books’ spines, Bark reduces the stack to a monolithic strata of paper grounded in the minimalist aesthetics of the late 1960s.

Bark’s interest in commonplace materials and imagery is evident in his photo booth assemblages made between 1969 and 1975. These unique works demonstrate the artist’s innovative and experimental use of a prosaic and restricted photographic format to explore a wide range of artistic concerns from performance to seriality, minimalism and abstraction. In addition, Bark’s gallery exhibition Public/Private held in 2018 highlighted his use of popular culture imagery sourced from magazines, posters and television sets.

Born in 1944, Jared Bark received his BA from Stanford University in 1966. A fixture of New York’s iconic downtown scene, he was featured in Harold Szeeman’s 1969 seminal exhibition, When Attitudes Become Form, at the Kunsthalle Bern, and the Brooklyn Bridge Event in 1971, organized by Alanna Heiss. His work has been exhibited widely and is included in numerous public collections including the Museum of Modern Art, Metropolitan Museum of Art, Whitney Museum of American Art, The Guggenheim, Centre Pompidou, National Gallery, London; National Gallery, Washington D.C.; Nelson-Atkins Museum, and the Albright-Knox Art Gallery. Bark’s monograph Photobooth Pieces, was published by Hunter’s Point Press in 2016.