Pippy Houldsworth Gallery presents Upstairs-Downstairs 1984-88: The Works on Paper a solo exhibition of previously unseen works by Jacqueline de Jong. This marks the first opportunity to see the complete group of the artist’s drawings related to her Upstairs-Downstairs paintings from the mid 1980’s, a series of works that is central to her wider oeuvre. 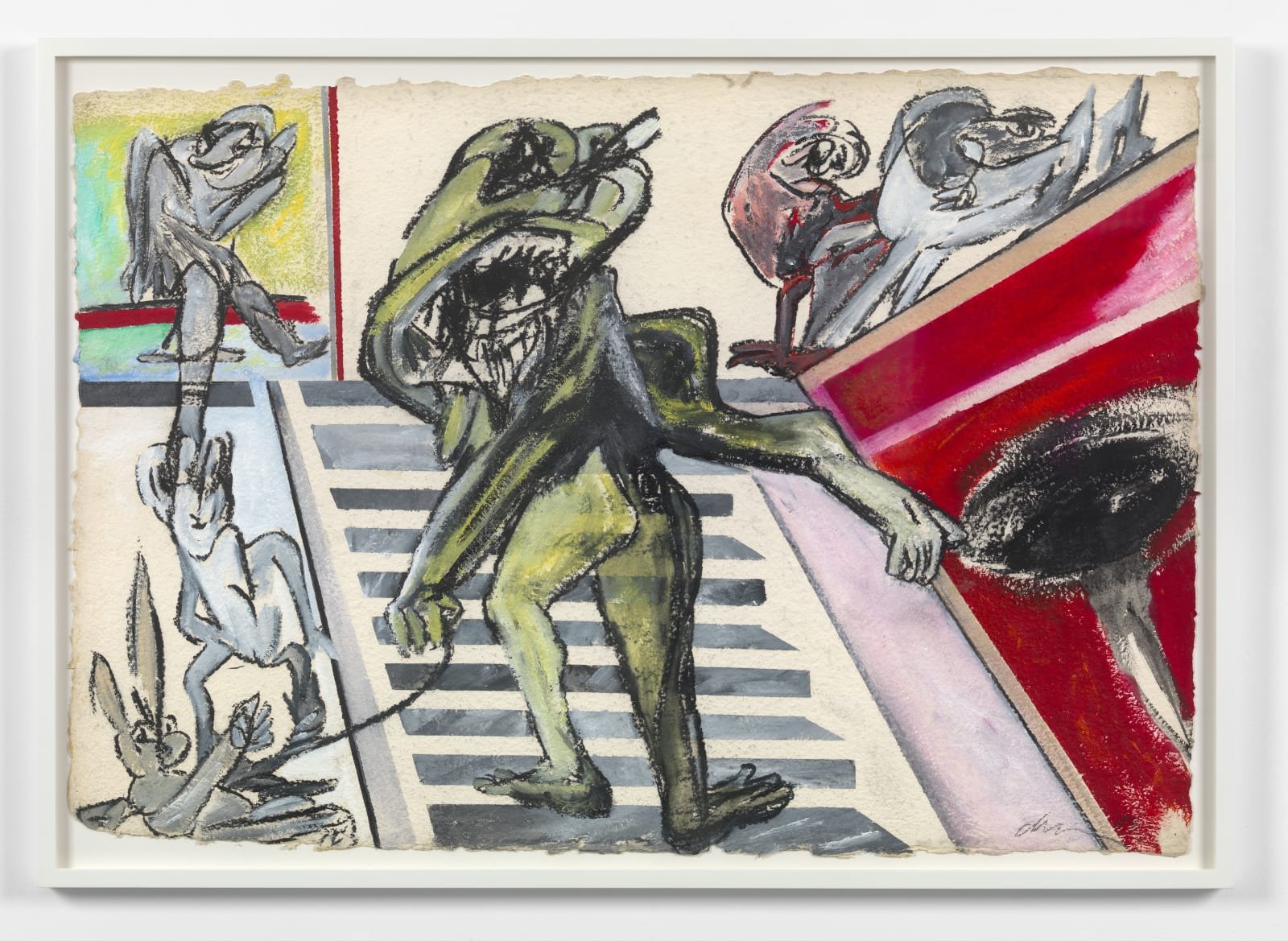 In 1985, de Jong was one of only 16 artists selected from 400 applicants to make work for the interior spaces of the new city hall in Amsterdam. The building had caused such controversy that it took over 60 years to come to fruition, but the final design by Wilhelm Holzbauer and Cees Dam was met with much acclaim, and City Hall was finally opened in 1988. De Jong was particularly interested by the central stairways and lobbies of this post-modern building, and subsequently made 27 paintings in response to these specific areas. The works remained in situ until parts of the building were demolished in 2017, after which they were acquired by the Amsterdam Museum.

The drawings featured in the exhibition at Pippy Houldsworth Gallery reveal the artist’s initial ideas for the commission, as well as glimpses into her working methods while contemplating it. Unlike their painting counterparts, the works on paper have remained removed from the public eye and in the artist’s own collection since inception. In the words of Juliette Desorgues, Curator of Visual Arts, MOSTYN, Wales:

Each drawing consists of bold, primary acrylic paint and thick black charcoal linework used to delineate monstrous, hybrid figures, set within a multitude of backgrounds, some representing claustrophobic interiors, or sea- and landscapes, and others devoid of any setting. A key common pictorial trope that defines the series as a whole is the presence of a central staircase, echoing the one found in the location it was commissioned for and which gave the series its suggestive title. At times sinuous, other instances imposing in stature, or depicted only faintly through a black line, the staircase becomes a theatrical prop which sets the stage for erotic, violent and humorous encounters.

As the title of the series suggests, the figures are in a process of constant movement ascending and descending the staircase. They hurriedly, humorously and violently enter and exit the picture plane. Like the Theatre of the Absurd, defined by post-war playwrights such as Samuel Beckett, Eugène Ionesco and Jean Genet, which itself found inspiration in the silent films of Charlie Chaplin and Buster Keaton, their behaviour twists and turns aimlessly. A theatrical or filmic performance of tragi-comic chaos unfolds on canvas.

It is the very medium of art itself that is subverted throughout de Jong’s aesthetic language. Her work moves playfully in a process of constant flux and experimentation, following Beckett’s staccato riddle which opened this text, caught in a play between failure and renewal. As we circle back to this Beckettian dictate, de Jong’s work may be defined as one of the most prescient and distinctive of the post-war era and beyond.

The exhibition runs concurrently with the artist’s solo museum survey exhibition, The Ultimate Kiss, inaugurated by WIELS, Brussels, in 2021; currently on show at MOSTYN, Wales; and touring to Kunstmuseum Ravensburg, Germany, later in 2022.

A small publication with the full text by Juliette Desorgues accompanies Jacqueline de Jong’s Upstairs-Downstairs 1984-88: The Works on Paper, and is available on request from Pippy Houldsworth Gallery.