Jaclyn Conley: In a New Field

Jaclyn Conley: In a New Field

Skarstedt presents In a New Field, an exhibition of new paintings by Jaclyn Conley, on view at the London gallery. 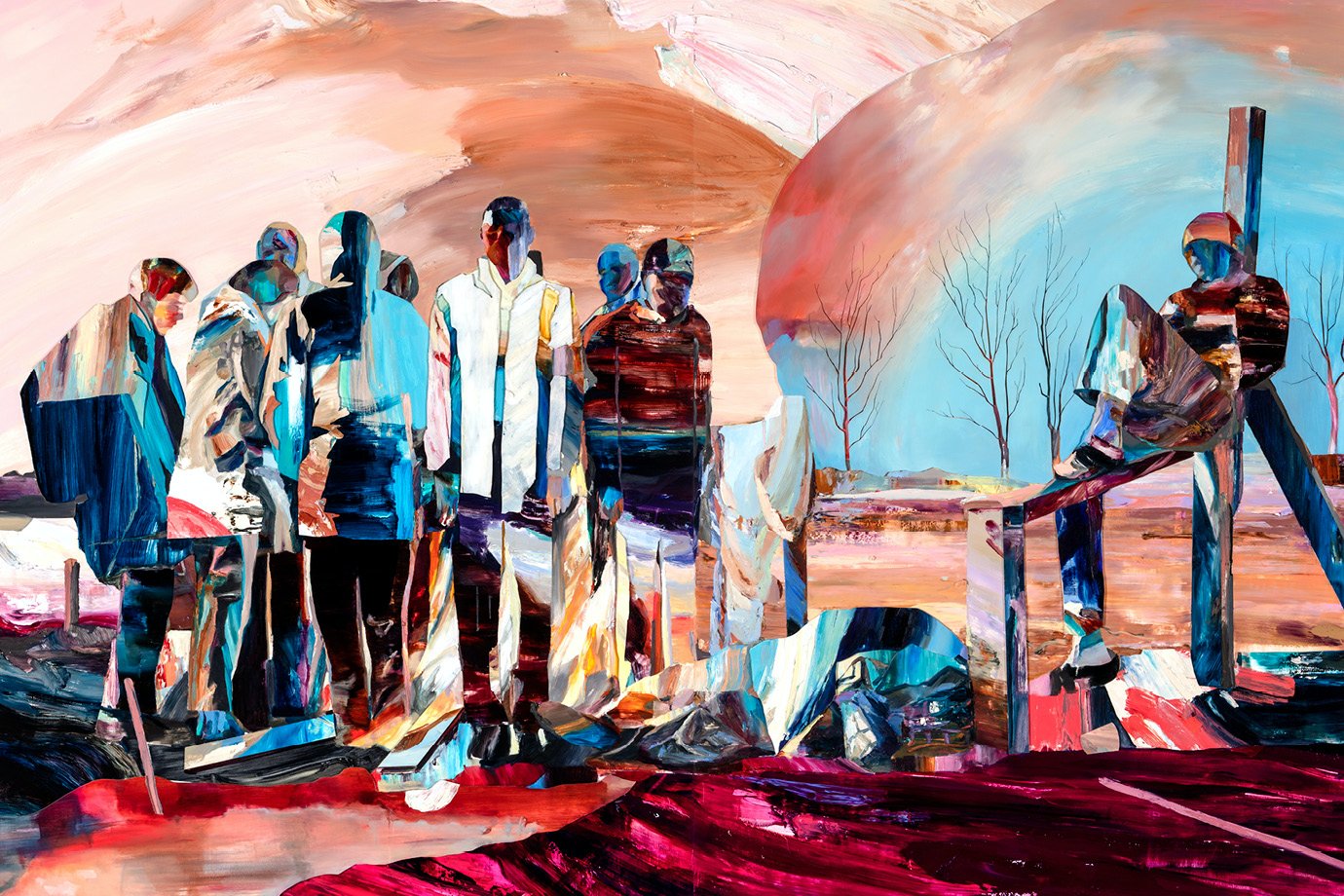 In her most recent body of work, Conley presents a poignant rumination on the social and political concerns of American life. Portraying the figures of ordinary subjects often on a monumental scale, Conley constructs history paintings of the present moment. In each work, the artist turns to some of the most iconic images in the history of art and documentary photography, reflecting on the notions of social progress and human experience.

In Those in Need of Hope (2020), Conley references Gustav Courbet’s ground-breaking painting The Burial at Ornans (1849- 50) and Paul Fusco’s photographic series titled RFK Funeral Train (1968), which captured the moment of national mourning following the assassination of Robert F. Kennedy in 1968. A radically realist image, The Burial at Ornans famously drew fierce denunciation in the Paris Salon of 1851-52 for its representation of an ordinary provincial setting on a scale which was previously reserved for heroic narratives or historic events. Importing the elements of Courbet’s frieze-like composition, Those in Need of Hope portrays a group of people gathering in silent observance, creating a vision of loss and unity. Combining the twentieth-century photographs with this celebrated art historical image, the artist simultaneously refers to the deeply rooted social tensions, and points at the universality of human emotion.

In this body of work, Conley reflects on the power of historic narratives and heroic figures to reverberate through time, shaping our memory and culture. “In my paintings I’m referencing historic photographs in which I can often glimpse the roots of our current moment, as parallels or connections that can act as a framework to comprehend the latest headline of chaos or hope,” the artist notes, “There’s been such a shared experience in this last year. The idea of collective inherited memory is something I’m interested in.” Presenting a tender portrait of a girl from Fusco’s photograph against the background of a historic 1968 graffiti, In Tribute (2021) speaks to the complex relationship between one’s sense of self and the stories, myths, and images which form our surroundings. The image of a child, a frequent subject in Conley’s work, both intensifies the sense of vulnerability of an individual against the tide of history and suggests the hopeful potential of life not yet lived.

In the painting titled In a New Field (2020), Conley transforms a figure in motion into an image imbued with stillness and intentionality. Turning towards the horizon line, the boy is rising on his bicycle to look beyond the tall crops, creating a powerful metaphor of hope amidst social turmoil. Here, the artist is referencing a photograph of a boy taken near Resurrection City, a protest encampment set up as part of the Poor People’s Campaign protest in Washington DC in 1968. The event was organized by Martin Luther King Jr. and the Southern Christian Leadership Conference (SCLC), although he had been assassinated before the event took place. For Conley, “the documented images of this patriotic gathering of a diverse crowd of Americans reflect a shared hope for victory over inequality.”

Painting in oil on wooden panels, Conley collages the panels to construct a composite image, alluding to her diverse visual sources and evoking at times the sense of fragmentation palpable in modern society. Operating in cadence with heavy impasto and areas of nuanced brushwork, the collaged elements slow down the process of reading the painting for the viewer, allowing a space for reflection and empathy with the subjects. As the artist explains, “The collage is also a tool of abstraction. Slowness is something I do think a lot about as a virtue, as a goal, as a refuge in some way. You just think of so many things in our lives today that aren’t slow. So having a picture that unfolds slowly, that isn’t legible quickly, that you can’t get right away is another goal.”

Jaclyn Conley is a Canadian born artist based in New Haven CT. Conley has exhibited nationally and internationally at venues including The Painting Center in NY, NurtureArt in NY, Projective City in Paris, Wynick/Tuck Gallery in Toronto, and the Aldrich Contemporary Art Museum in Ridgefield CT.

Conley has been the artist in residence at the Vermont Studio Center and The Emily Carr University of Art and Design in Vancouver Canada. Conley has received grants including the Connecticut Office of the Arts Fellowship, the Canada Council for the Arts Visual Arts Project Grant, the Elizabeth Greenshields Award and the Fellowship from the Sam and Adele Golden Foundation. Her work has been reviewed and featured in numerous publications including The New York Times, Canadian Art, Border Crossings, and New American Painting.