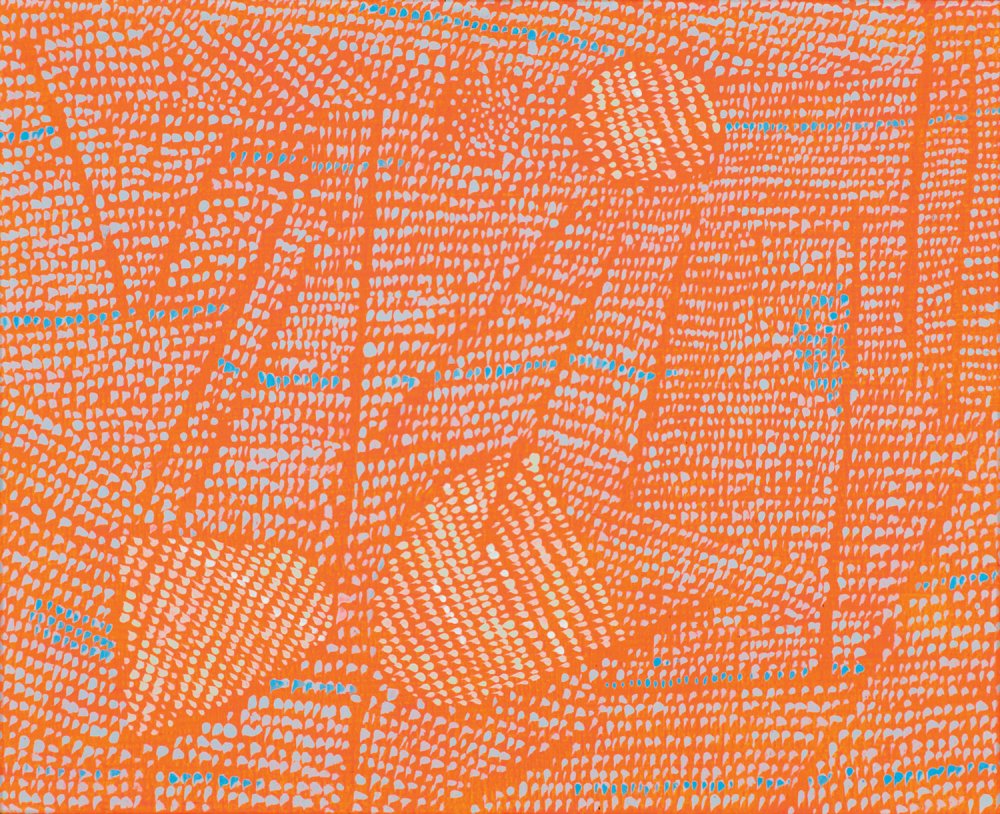 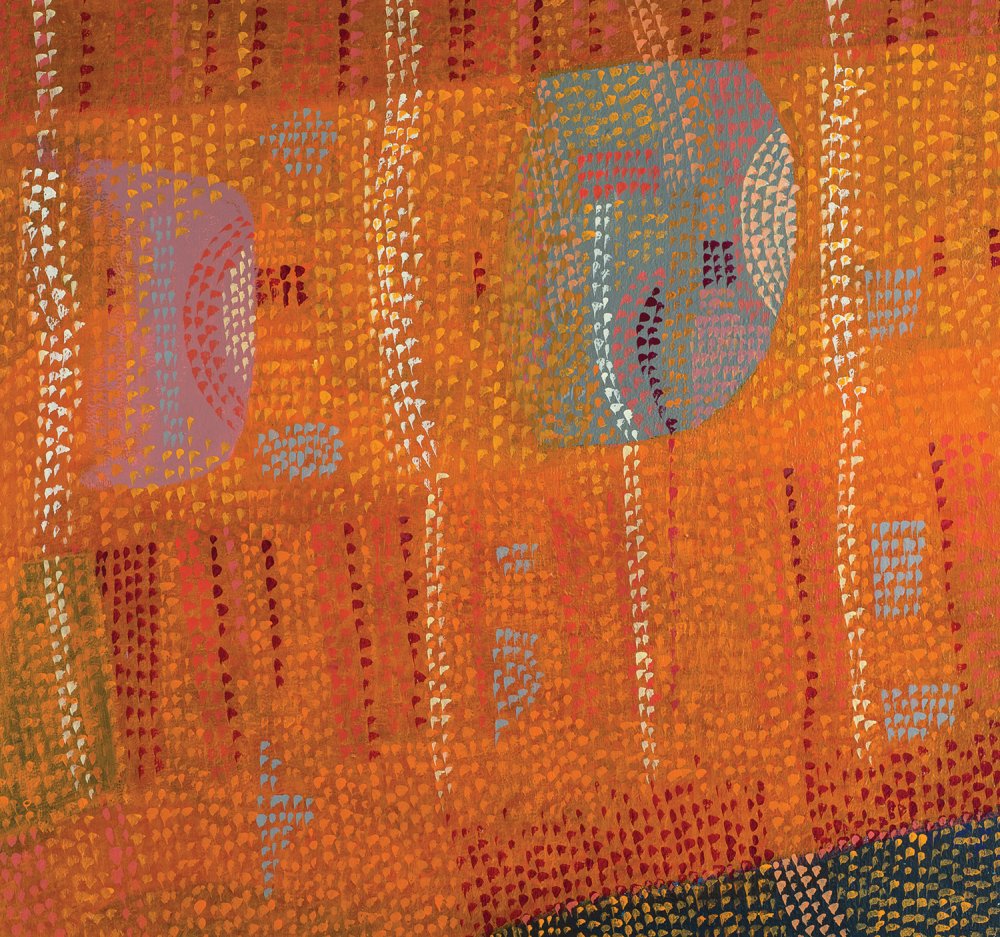 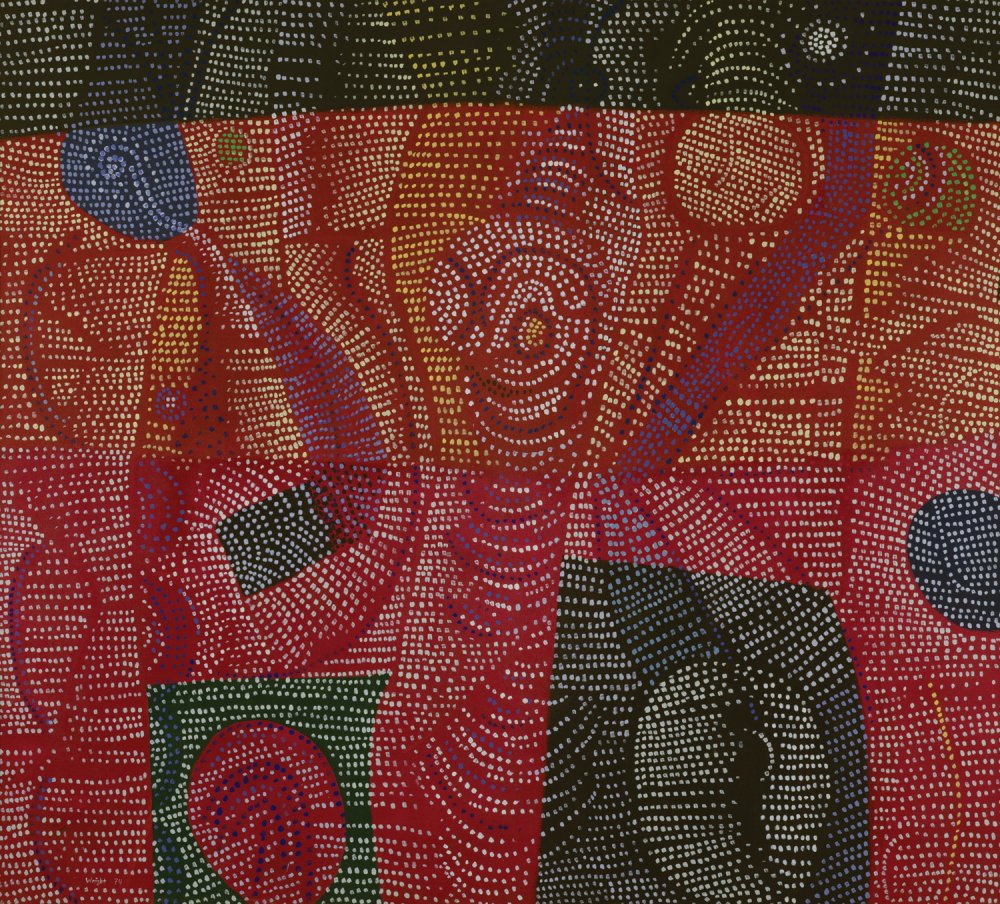 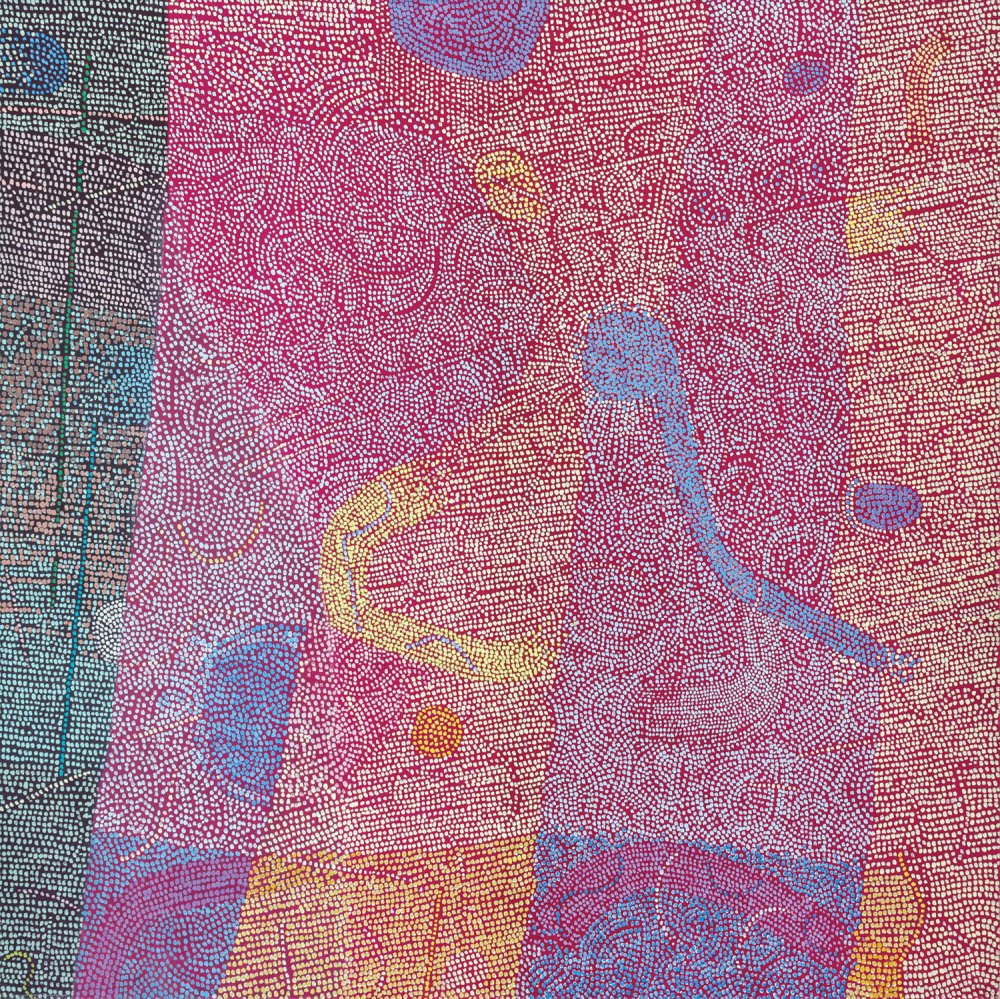 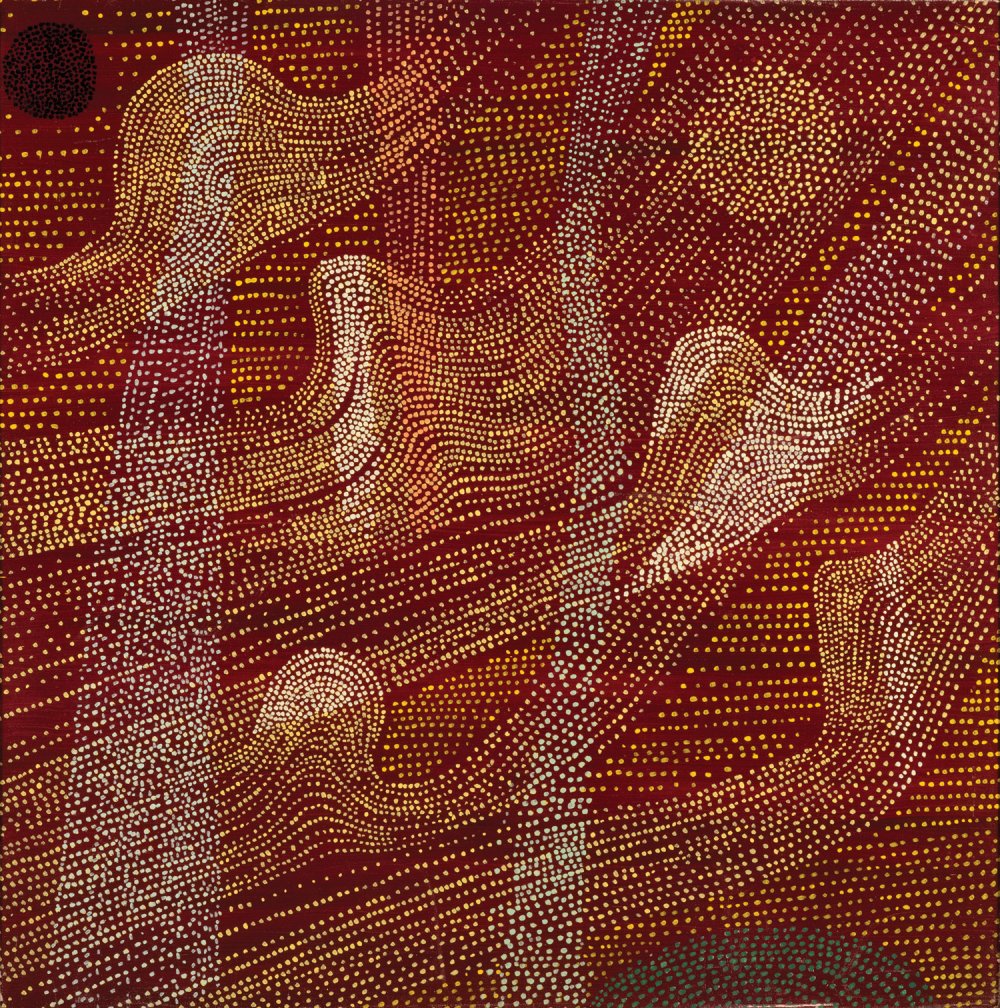 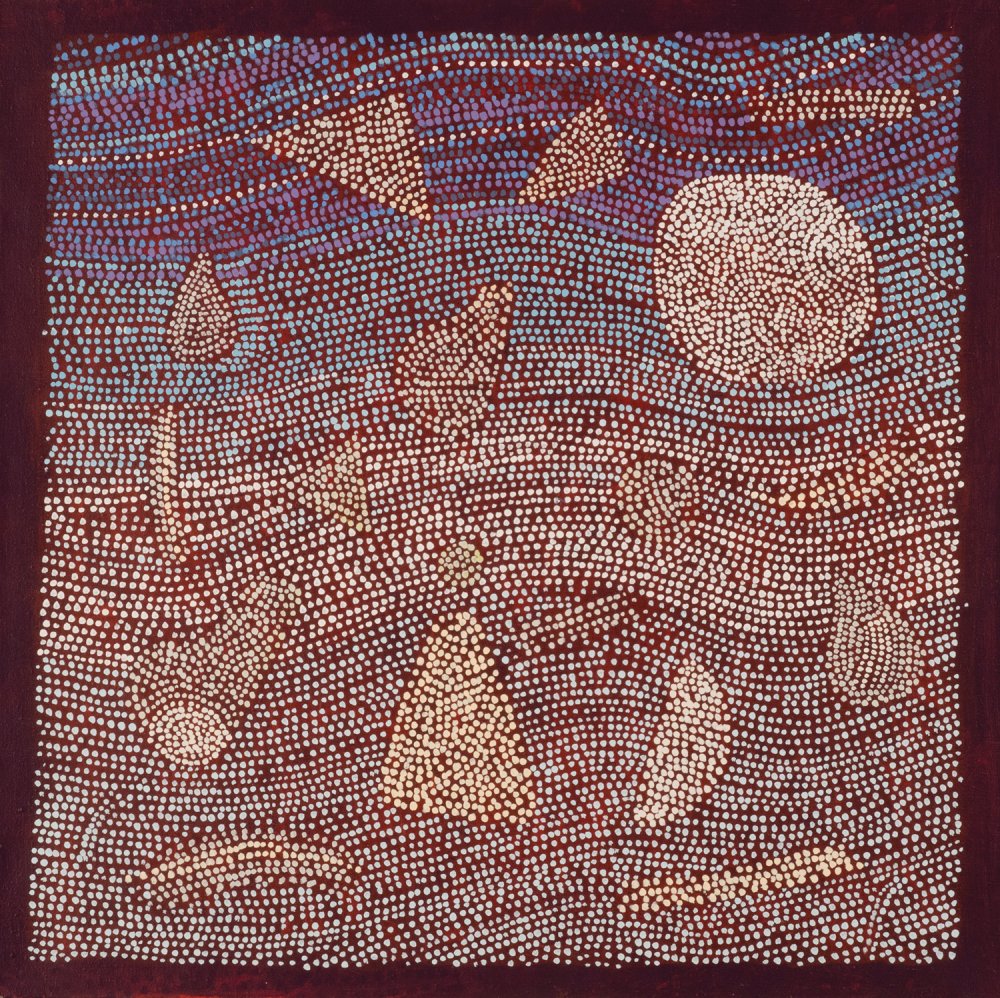 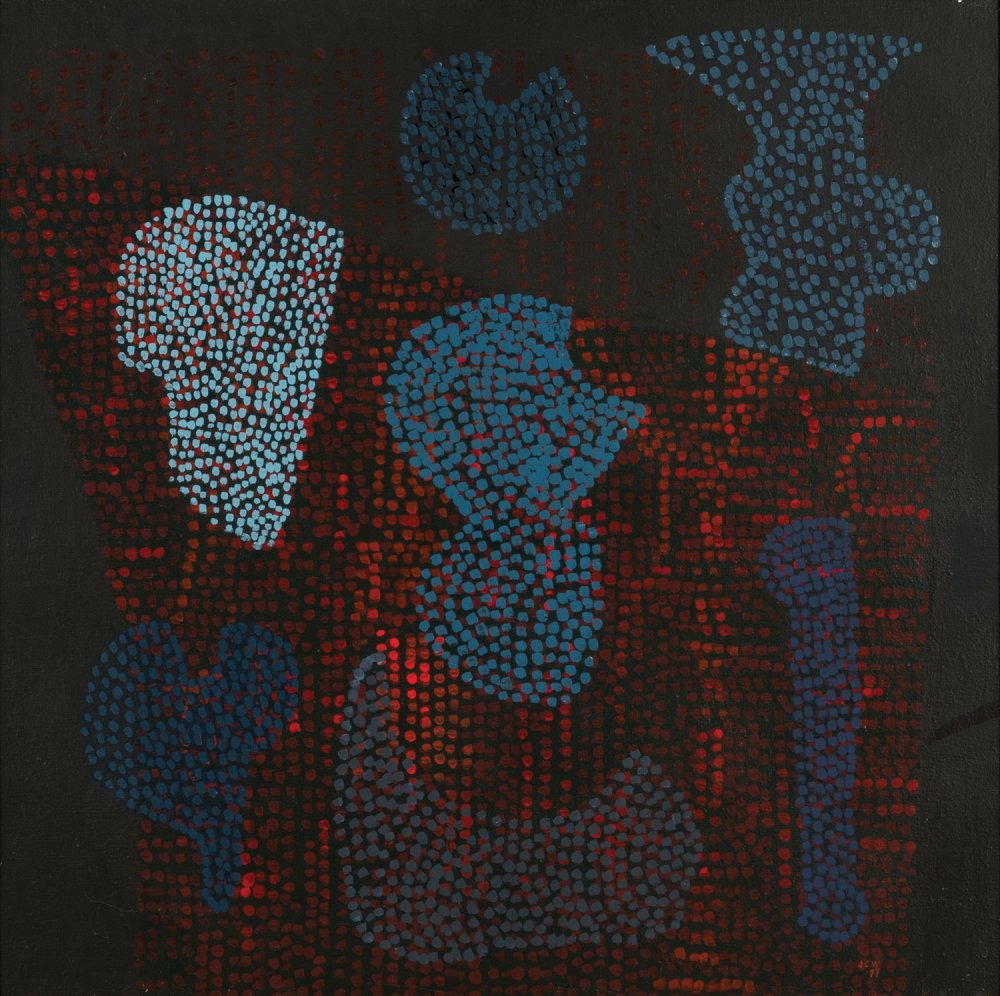 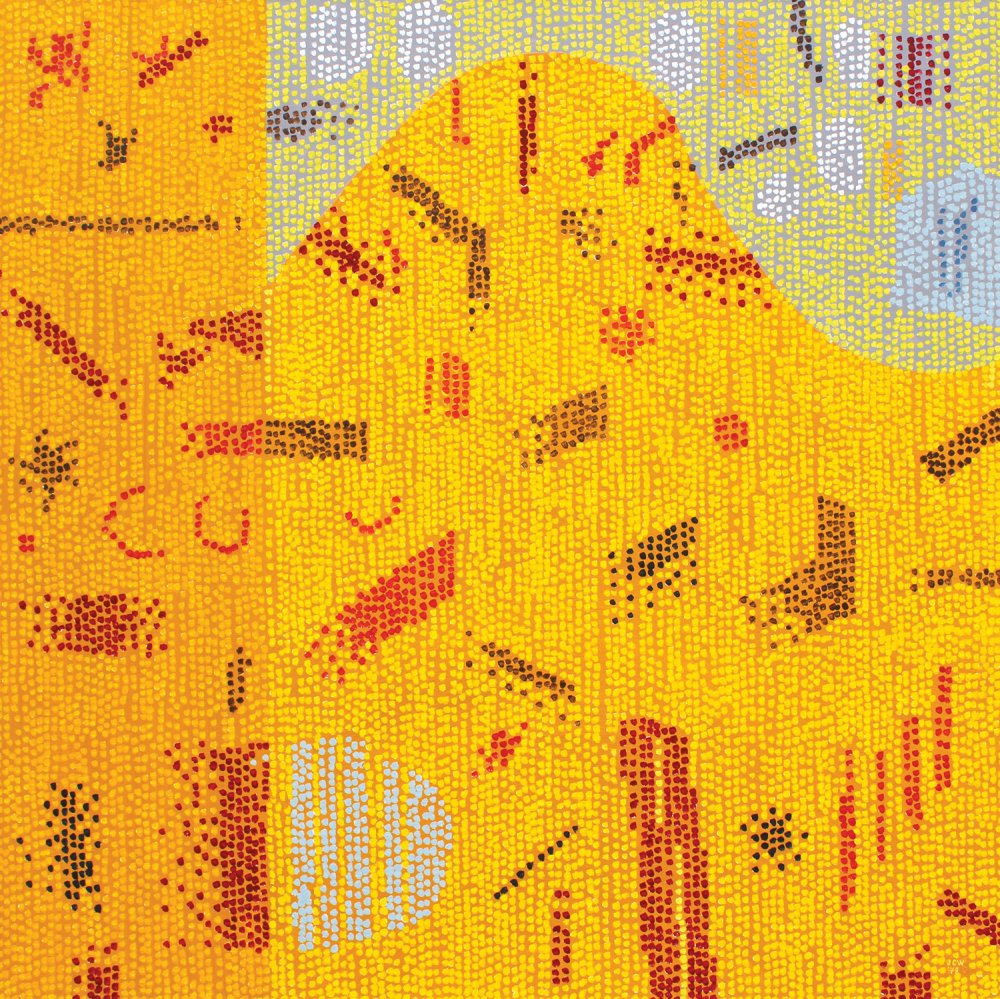 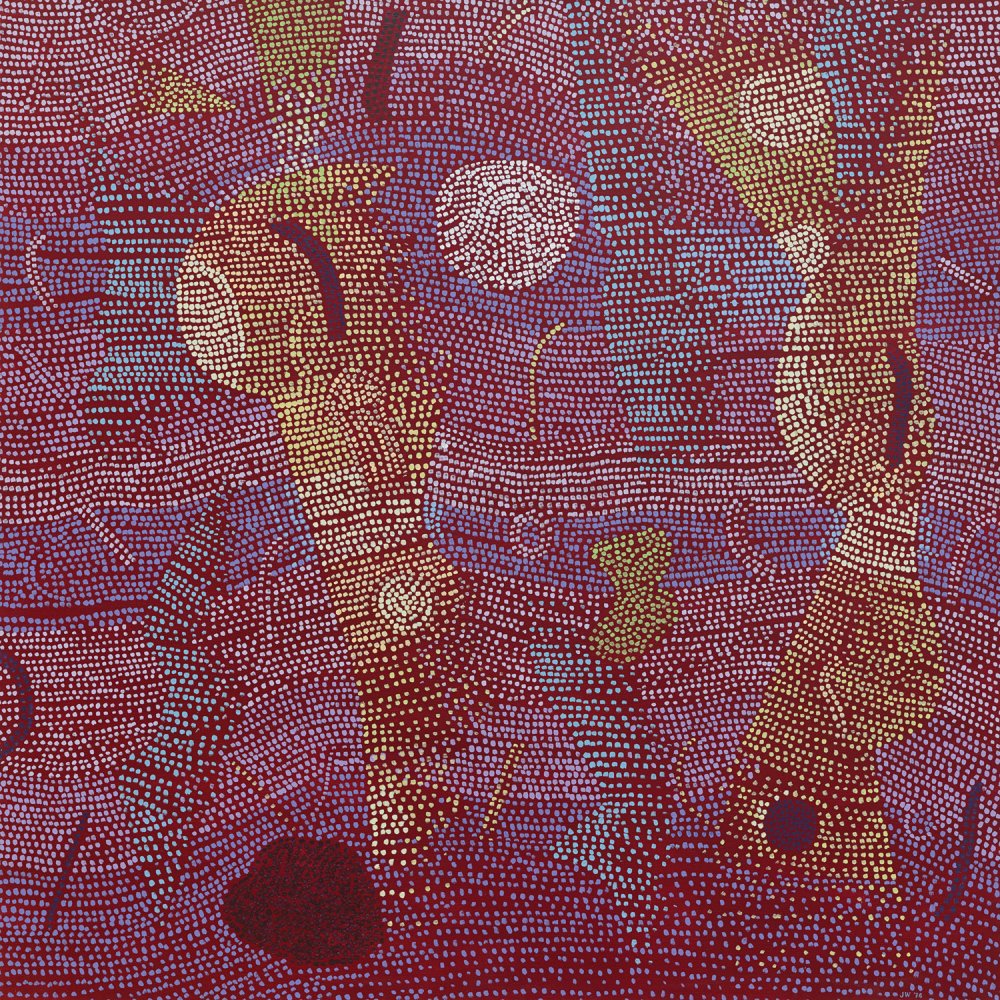 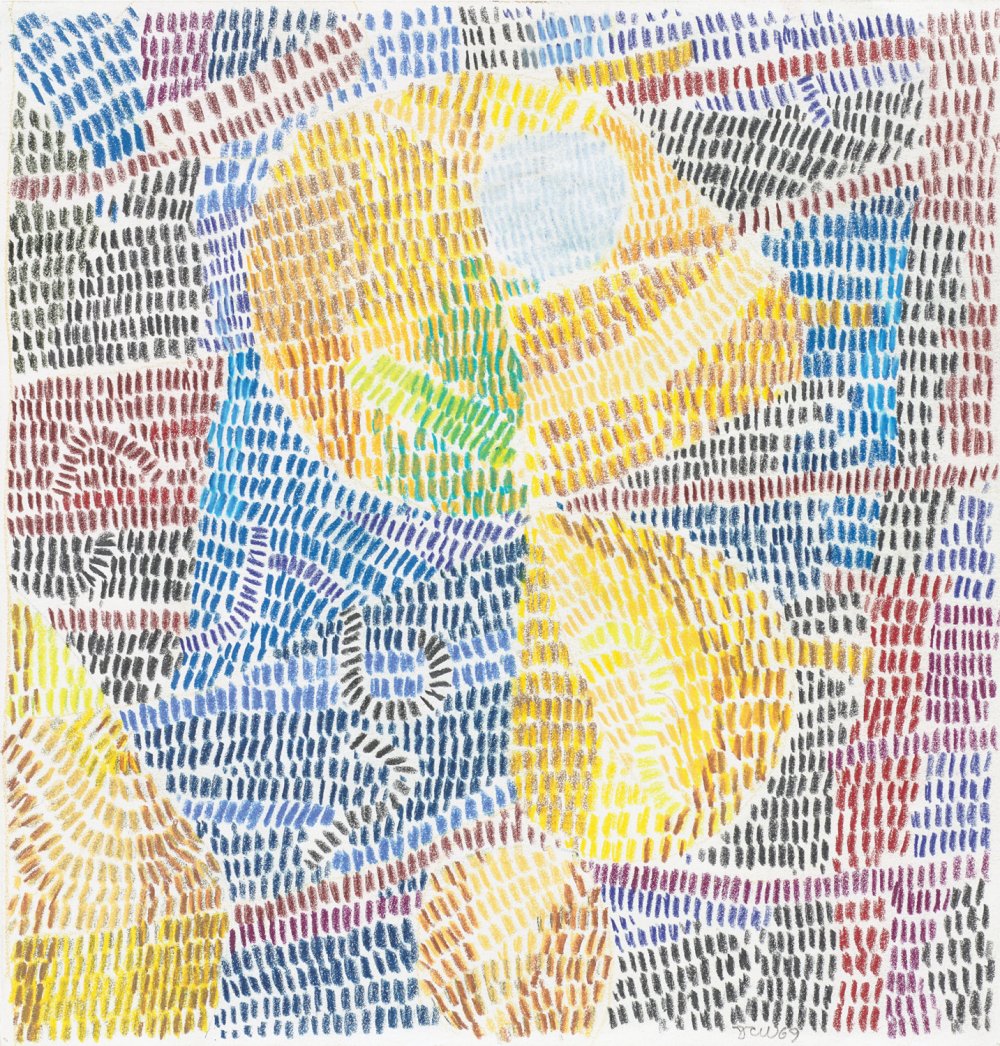 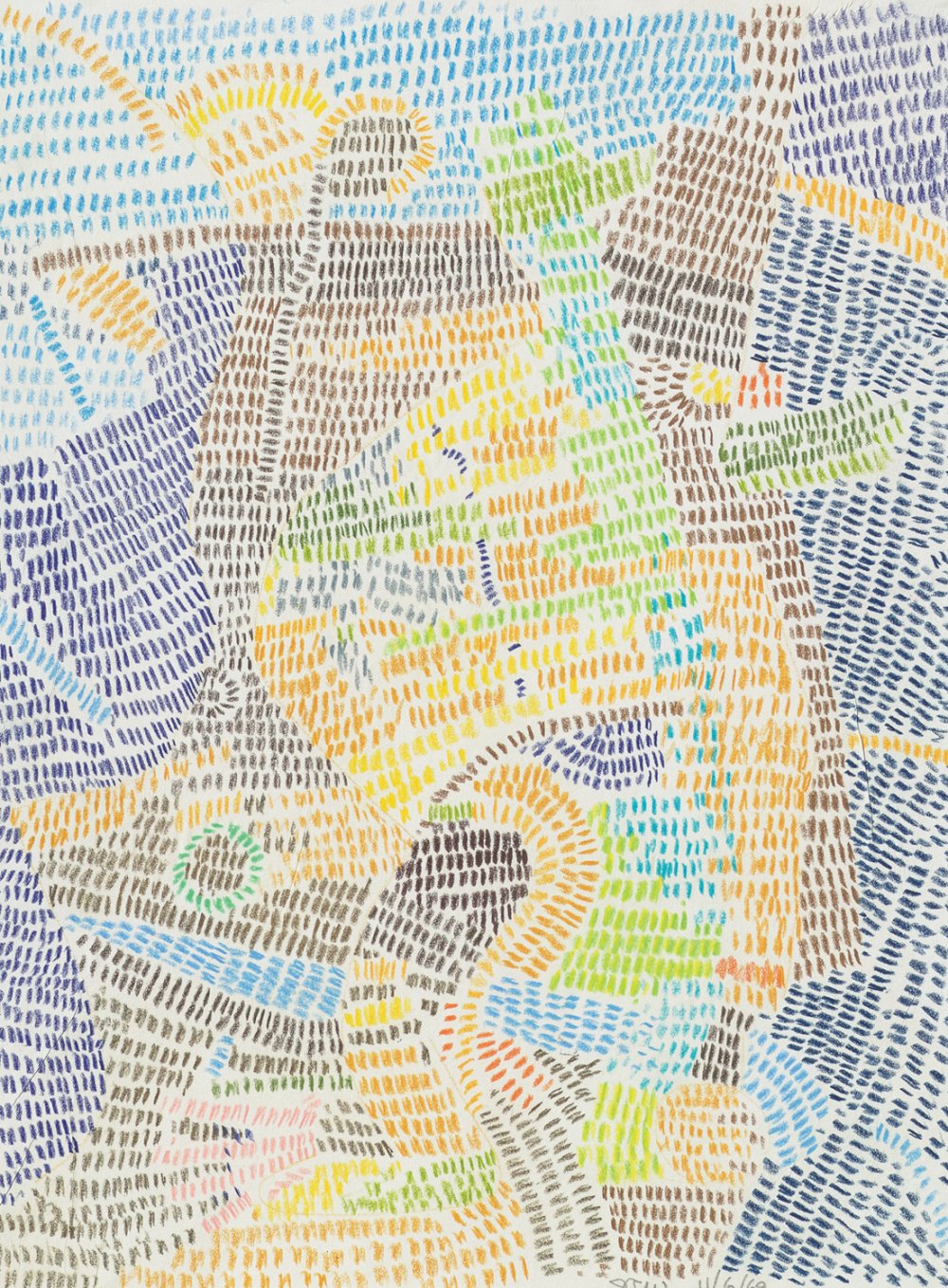 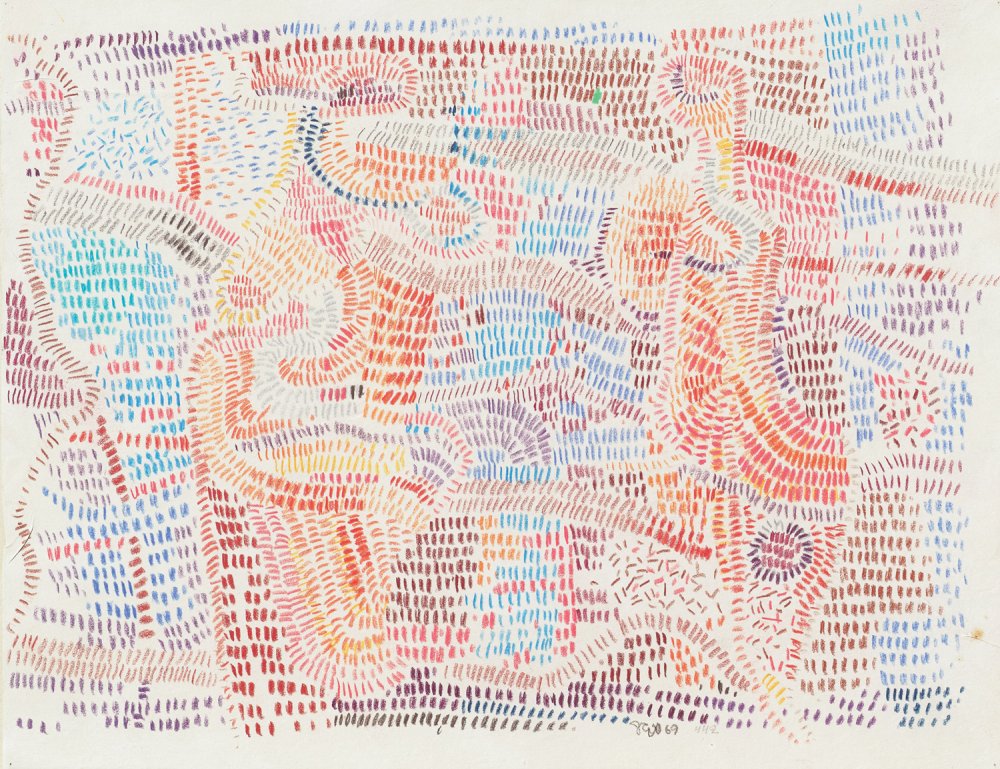 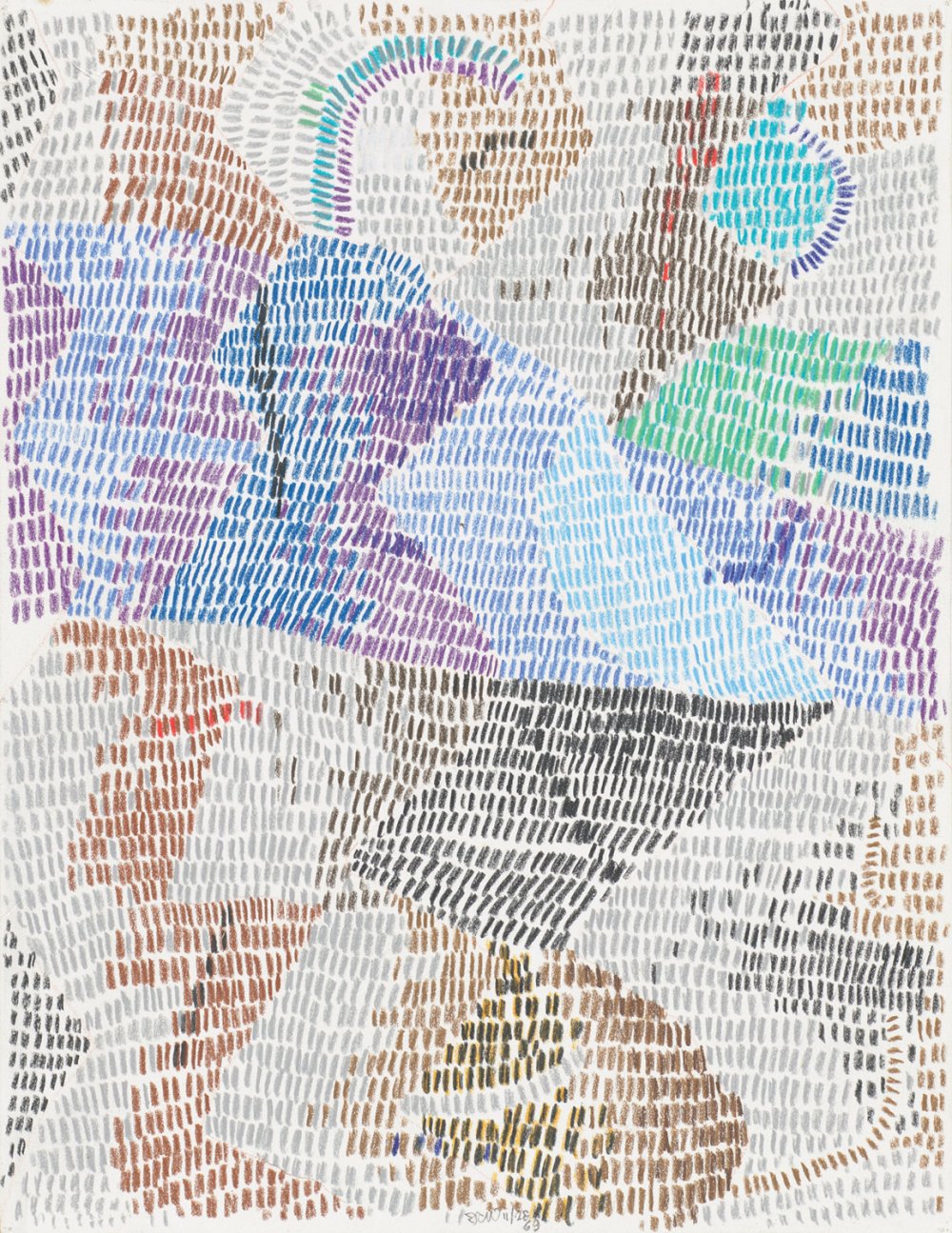 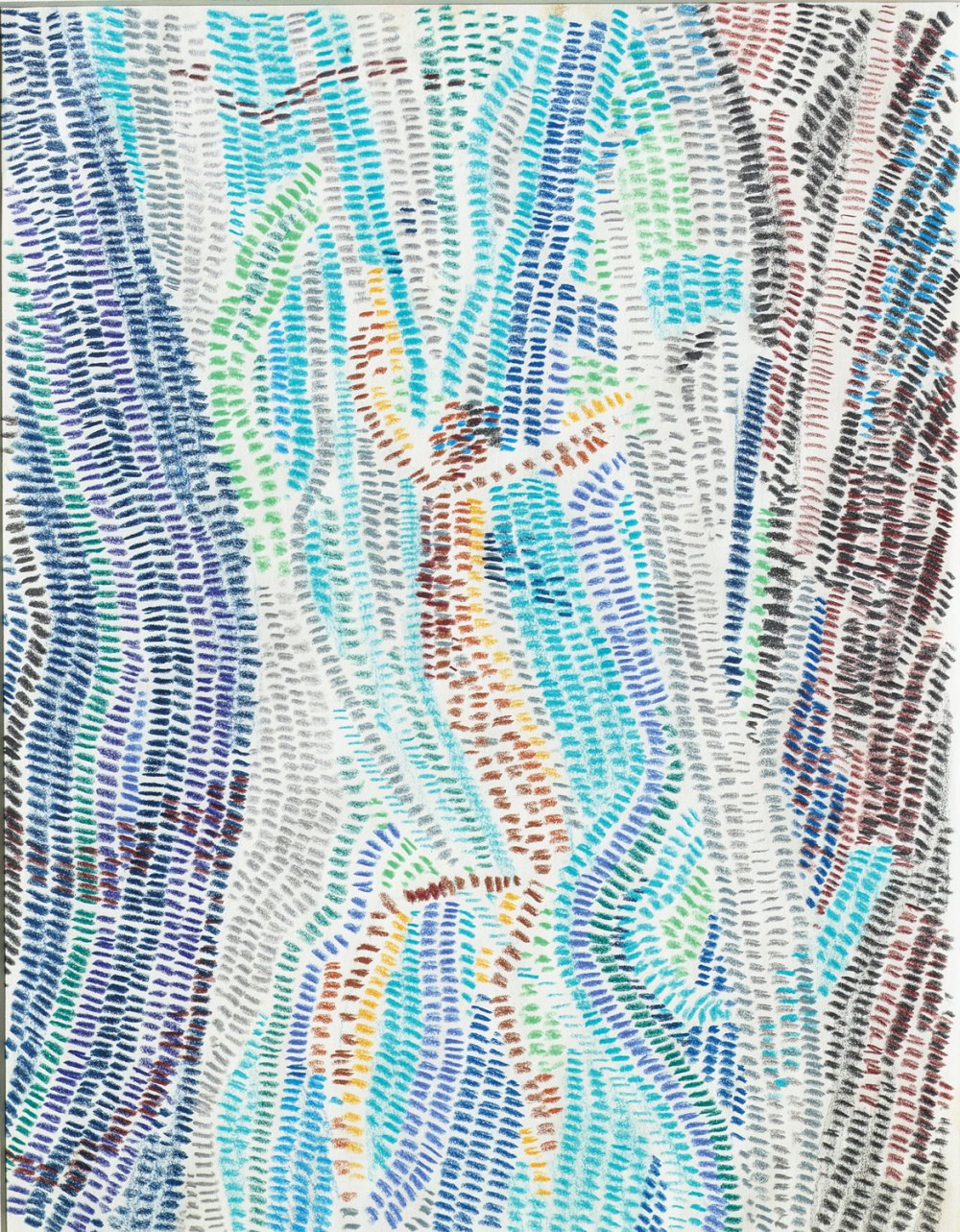 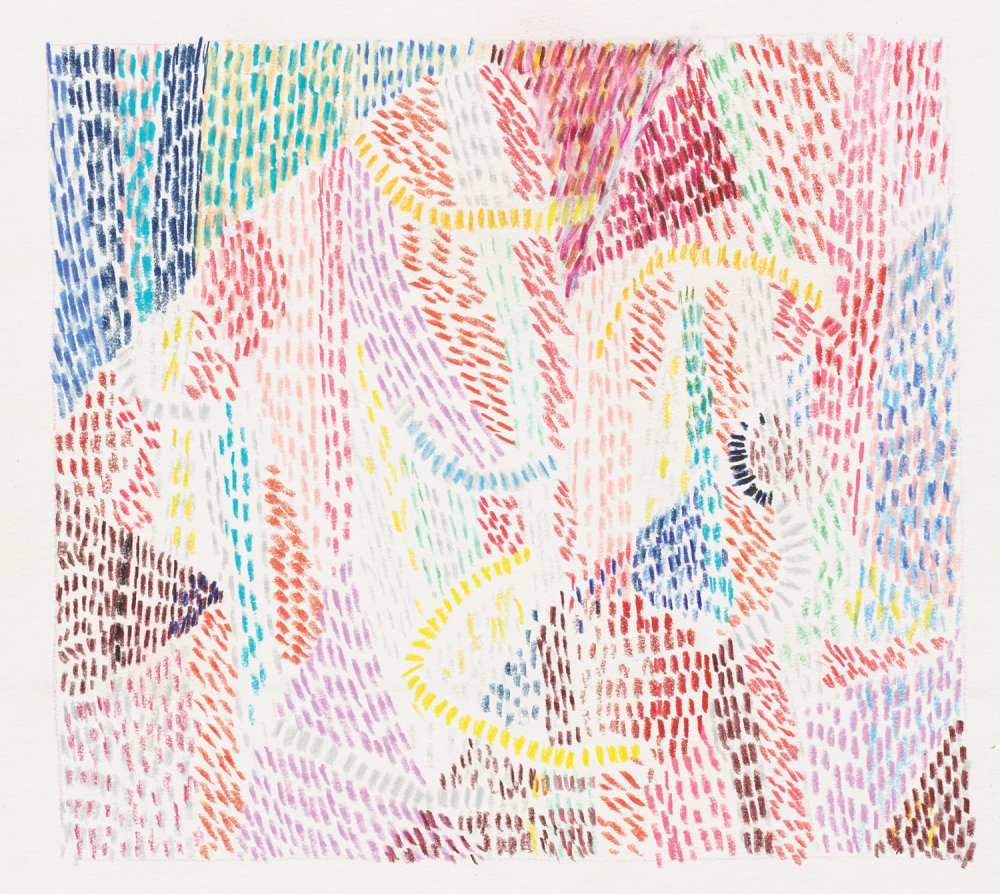 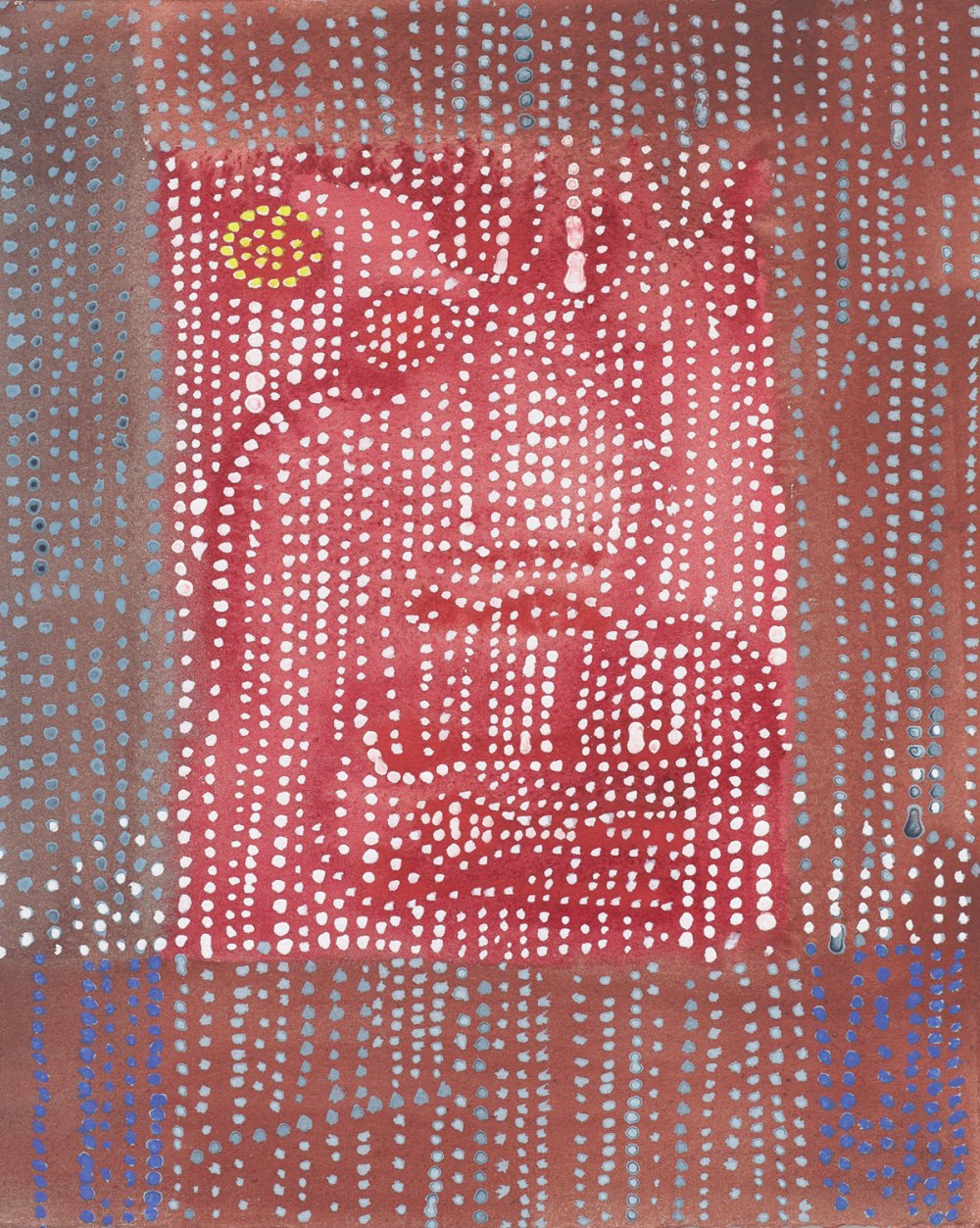 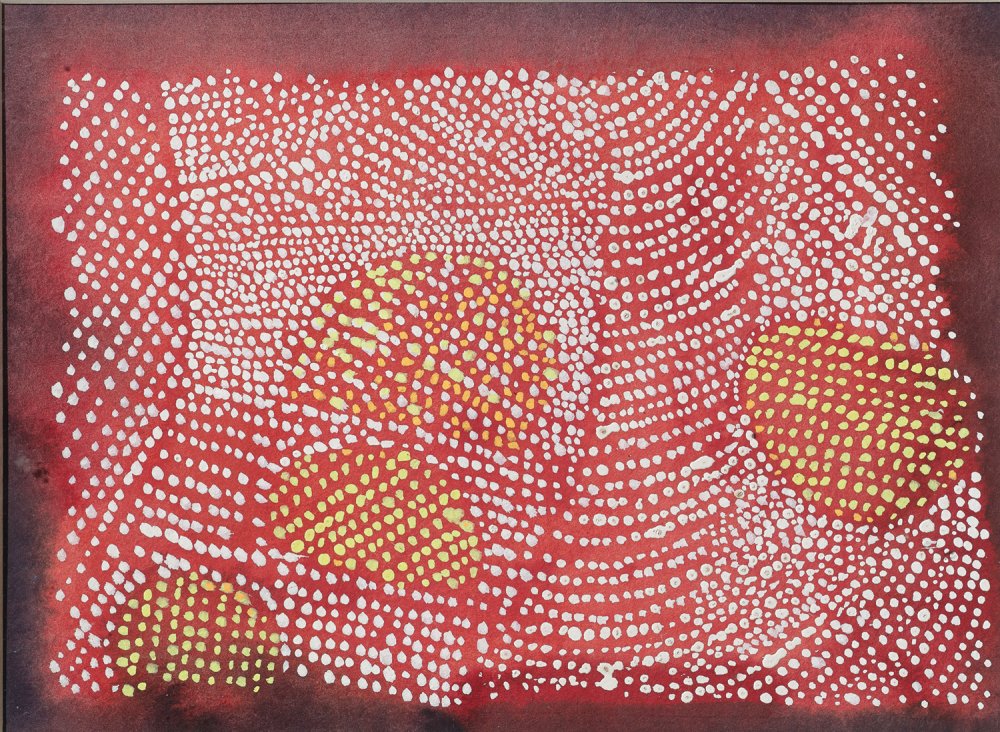 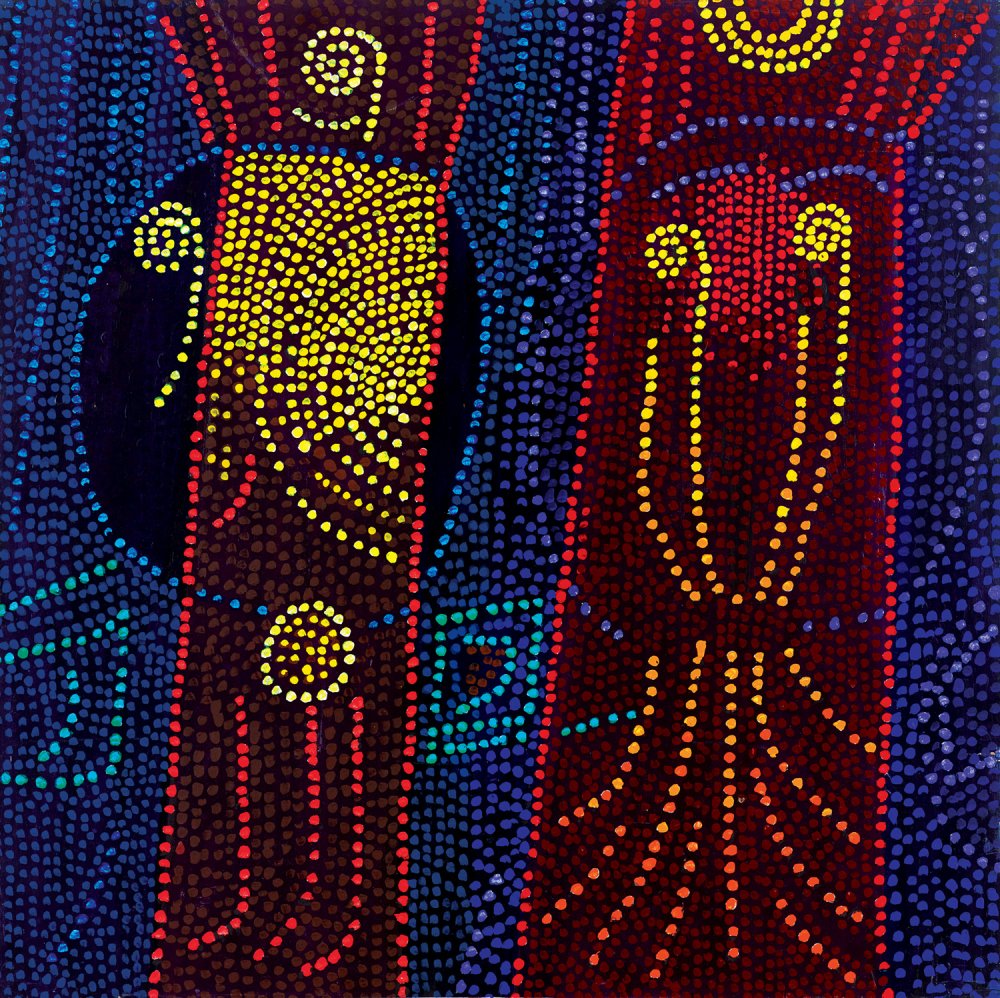 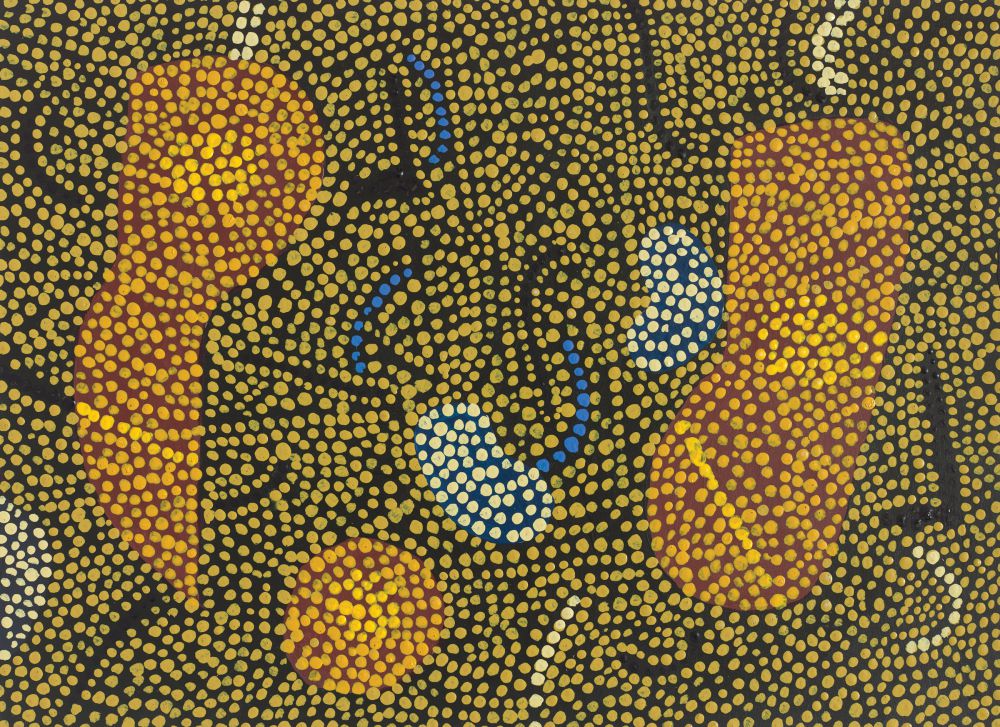 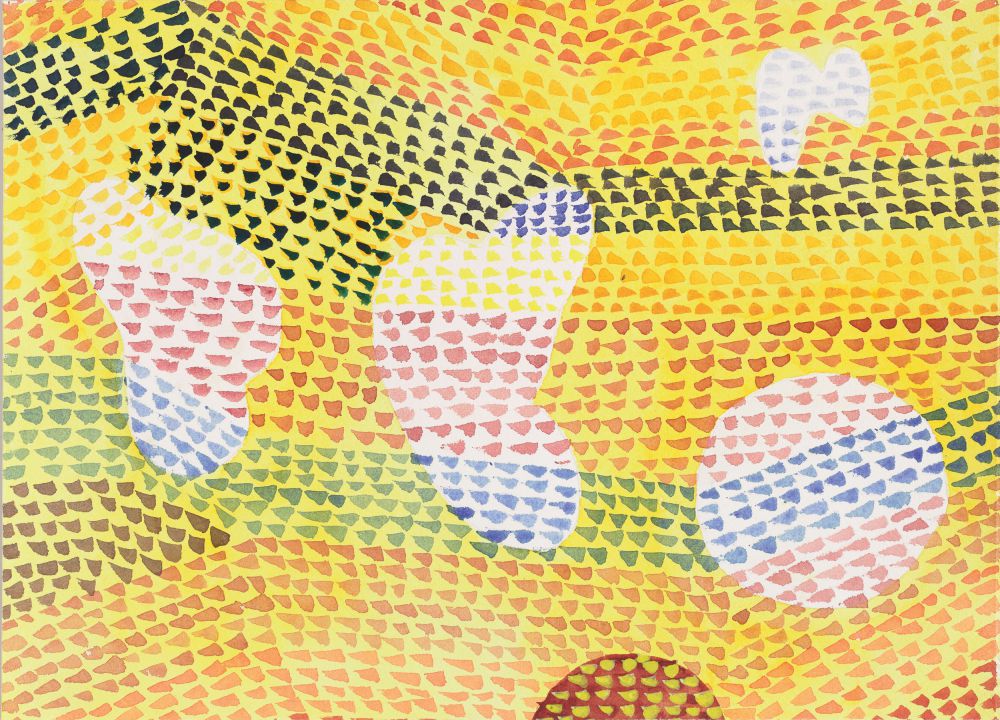 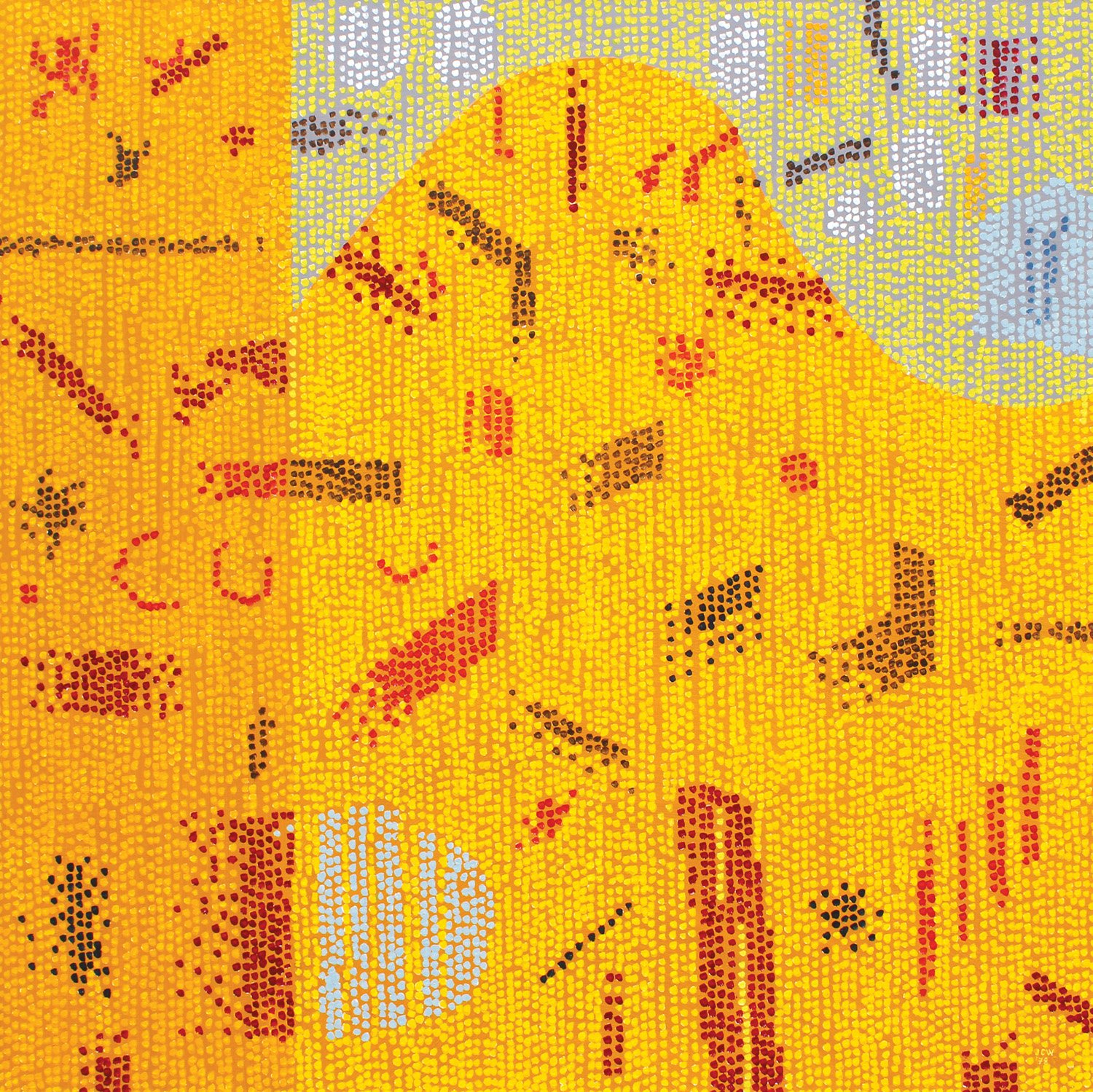 The luminous paintings of Jack Wright evolved from years of contemplation and introspection, during which the artist developed a subtle perception of the natural world, creating his own cosmological map. Wright’s early works recalled the techniques of a neo-impressionist using pointillism, yet his subject matter moved deeper into the unseen worlds of dreams and inner vision.

The primal mark he used to create his own worlds––dots––serves to convey an inner light and build an atmospheric field of luminous vision. The dots later evolved to calligraphic strokes, becoming lines.
– From Luminous Visions by Fariba Bogzaran

At first glance the work of Jack Wright presents a mystery. He gives you enough initial information to pique your curiosity and lure you in for a closer look, but the paintings don’t readily give away their deepest secrets. Instead, they make a compelling visual case to bring yourself to them, that you, the viewer, should be truly present to receive them. It is only in this state of mind that one begins to really see the works. Up to a point Wright worked like a scientist, carefully considering every element of light, color, depth, and composition until each painting worked in perfect harmony. But then it is clear that the deference to a scientific order stops, and a profound artistic vision takes over. The art begins to vibrate in a way that is almost musical, and you must abandon the mere visual clues and allow yourself to feel how the artist passionately conducted each mark and movement in his work, as if they were notes of a symphony.

John “Jack” Cushing Wright’s career as an artist mirrors the growth of American culture that came to prominence after World War II. Born in St. Paul, Minnesota, in 1919, he showed the inclination to be a painter at an early age. This was galvanized when he studied with the painter Cameron Booth at the St. Paul School of Art in the late 1930s. Booth introduced him to modernism and the work of Giorgio de Chirico, Eugene Berman, Pablo Picasso, Paul Klee, and Henri Matisse. Booth’s combination of art historical instruction and personal guidance helped pave the way to Wright’s artistic devotion and open-minded ideas based on personal liberty and individual expression.

Wright joined the Army in 1942, and in 1945 he married the painter and future ceramicist Patty Ordway, a partnership that would endure the rest of their lives. The Wrights moved their young family to Northern California in 1950, seeking the open-minded ideals that epitomized the Bay Area and which better mirrored their own. They settled in Marin County, and Jack worked as an architectural color consultant while still actively painting. In time the family grew to four sons. In this period he was also making inroads into the art world, having regular shows and exhibitions at such venues as the Walker Art Center and Minneapolis Institute of Art. Then, in 1948 his work was shown at the Betty Parsons Gallery in New York, one of the leading avant-garde galleries of its day.

In 1952 Wright made one of his first pointillist paintings. This would prove to be another crucial moment in his life. Although stylistically it was realistic, this work hinted at the abstraction and spiritual undertones to come. The image of two pieces of fruit sitting alone in front of a vast mountain range evokes the ethereal, almost surreal, weightlessness that would later define his work. The pointillist style would evolve into the large scale abstractions for which he was best known.

Another of the pivotal moments in Wright’s growth came in the mid-1950s when he met the English painter Gordon Onslow Ford, who had been one of the original members of the Parisian Surrealists. He had served as an officer in the Royal Navy and came to the United States in 1940 as an emissary of European culture; he was tasked to give a series of lectures on Surrealism at the New School for Social Research in New York, which would prove to have a far reaching effect regarding the transition of the art world from Europe to the United States during World War II. After that he lived in Mexico for several years and finally settled in the Bay Area by 1947. Jack’s relationship with Gordon would influence his work and refine his thinking about art’s purpose and production; he was introduced to lucid dreaming and benefited greatly from Gordon’s immense experience as an artist.

Through Onslow Ford, Wright was also introduced to a group of painters and sculptors with whom he would go onto collaborate for decades to come. John Anderson, J.B. Blunk, Richard Bowman, Fritz Rauh, and Lee Mullican, along with Onslow Ford, would form a veritable “lost school” of California artists. The shared vision and the collaborative efforts of these artists led to a group that made art without boundaries and limitations. As a result, they accomplished some of the most thorough visual research on consciousness from the perspective of visual artists done in the last century. It is only now that the public at large is being exposed to their conclusions. They acted as pioneers, forging a new direction unrestricted by the need to make gallery friendly art. This created a culture of creative purity: this group that existed on the pristine ridges and mountainsides of Marin County worked far away from the commercial demands of the art world and its accompanying anxious quest for fame.

In 1957 the Wright family walked away from their everyday life and spontaneously moved to Mexico. They were inspired by the stories of Onslow Ford and friends who had lived there and made the decision to act upon their need for adventure and change. The Wrights’ journey took them near Morelia, and later to San Miguel de Allende. It was there Jack worked in his first real studio, which had an outdoor space with incredible light.

The two year–journey to Mexico would prove to be another pivotal moment in Wright’s life. His work was forever changed; it became expansive in subject matter and in scale. His relationship to light also evolved significantly, creating paintings in which multiple layers of visual information are separated and then put back together seamlessly into a pattern of his own design.

Having learned the value of a proper studio, Jack set out to find the right environment in which to paint… [He built] his own studio close to his home high on Mount Vision in Inverness, California. As Jack put it “the studio was an answer to his dreams.” He recalled in the 1988 documentary Dragons on the Ridge that the view over Tomales Bay was so distracting that he had to paint the studio’s large east-facing window white so he could focus on his work. And focus he did; the new space allowed him to paint on a large and organized scale. The sophistication and concepts of his work grew as he realized the possibilities of his new space.

By the 1960s Wright’s mature style was well in hand. However, he was never an artist to be boxed in, and as a result of this liberated ideology, there was the occasional return to representational work… Like Van Gogh, Wright had the uncanny ability to break down his imagery into its essential components, while retaining its elemental and atmospheric vitality. Both artists kept the eye in motion and allowed the viewers of their paintings to discover something new at each viewing.

In the 1970s Wright’s work continued to evolve. The dot-filled canvasses of this period… emphasize subtle shifting colors and evoke thoughts of ethereal grandeur that, although mysterious, are also familiar and beckon us to inhabit them. The artist controls the wandering of our eye with patterned brush strokes that keep our attention drifting along the surface of the canvas. His paintings often have a geometric base that creates a visual platform for us to stand upon as we engage his shifting luminescent world. It’s easy to become transfixed by Wright’s technical prowess. By this point in his career his command of this highly refined technique was absolute. The artist’s work was largely composed of thousands of dots painstakingly applied, each with a specific intention. In some cases the shifts in the color fields are so slight that they are nearly impossible to distinguish from each other. Wright was a gifted colorist who understood how to incorporate the natural functions of the human eye. He would place strokes of color on larger fields, the result of which would be a secondary color that was a creation of the viewer’s eye. In other places, the dots drift together to form energetic masses that manifest thoughts of the cosmos and phantasmal apparitions.

The paintings of Jack Wright can also be read as portals and gateways. There is a special vitality in his work from this period—a sense of being pulled in and led to a place of weightless clarity. Large-scale pieces made up a significant amount of Wright’s late oeuvre, some as big as 18 x 12 feet. The benefits of working on such a scale are evident when you look at the encompassing complexity of pieces such as Two Figures on page 13. At first glance this piece appears to be as much woven as it is painted. The shifting patterns of subtle purples seamlessly transition into richer undertones. The lighter shapes then dance to the foreground and evoke transparent figures swaying rhythmically like treetops in a gentle breeze.

Jack Wright had a gift for seeing the world around him. He was incredibly sensitive and kept track of his life with photographs, newspaper clippings, and his extensive journals that chronicled decades of his existence and catalogued his day to day activities in exacting detail. But, mixed into the daily routine of his life are hundreds of small spontaneous sketches. It is not unusual to see a profound drawing existing alongside a laundry list or a description of the day’s meal. The artist did not separate creation from his everyday life; to him they were one in the same. This resulted in a refined body of work, emanating from an elegant mind that as easily navigated the extraordinary as it did the commonplace.

It is easy to focus exclusively on the work of the well known titans of modern art. However, to do so would lead to an incomplete understanding of the century itself. By reviewing the personal revelations of artists like Jack Wright we shed light on the great leaps forward that occur in quiet places and on the unacknowledged advances that fill in the gaps of history and give us the privilege of seeing a larger whole.

From Luminous Visions by Travis Wilson

“My hope is that a painting will have a silence to it and evoke a sense of mystery, I don’t think a painting is successful unless there is some mystery in it. It either gets it or it doesn’t. I think all great paintings have had some of that in them. There has to be some wonder, there has be something that isn’t all perfectly clear.”
– Jack Wright, Dragons on the Ridge