‘I can build anything I want to. I’m not a narrative painter. I don’t do the idea or the painting being the illustration of an idea. It’s all about the materiality of the paint.’
— Jack Whitten

Hauser & Wirth Hong Kong presents American abstractionist Jack Whitten’s first solo exhibition in Asia. Celebrated for his innovative processes of applying paint to the surface of his canvases and transfiguring their material terrains, Whitten’s work bridges rhythms of gestural abstraction and process art, arriving at a nuanced language of painting that hovers between mechanical automation and intensely personal expression. 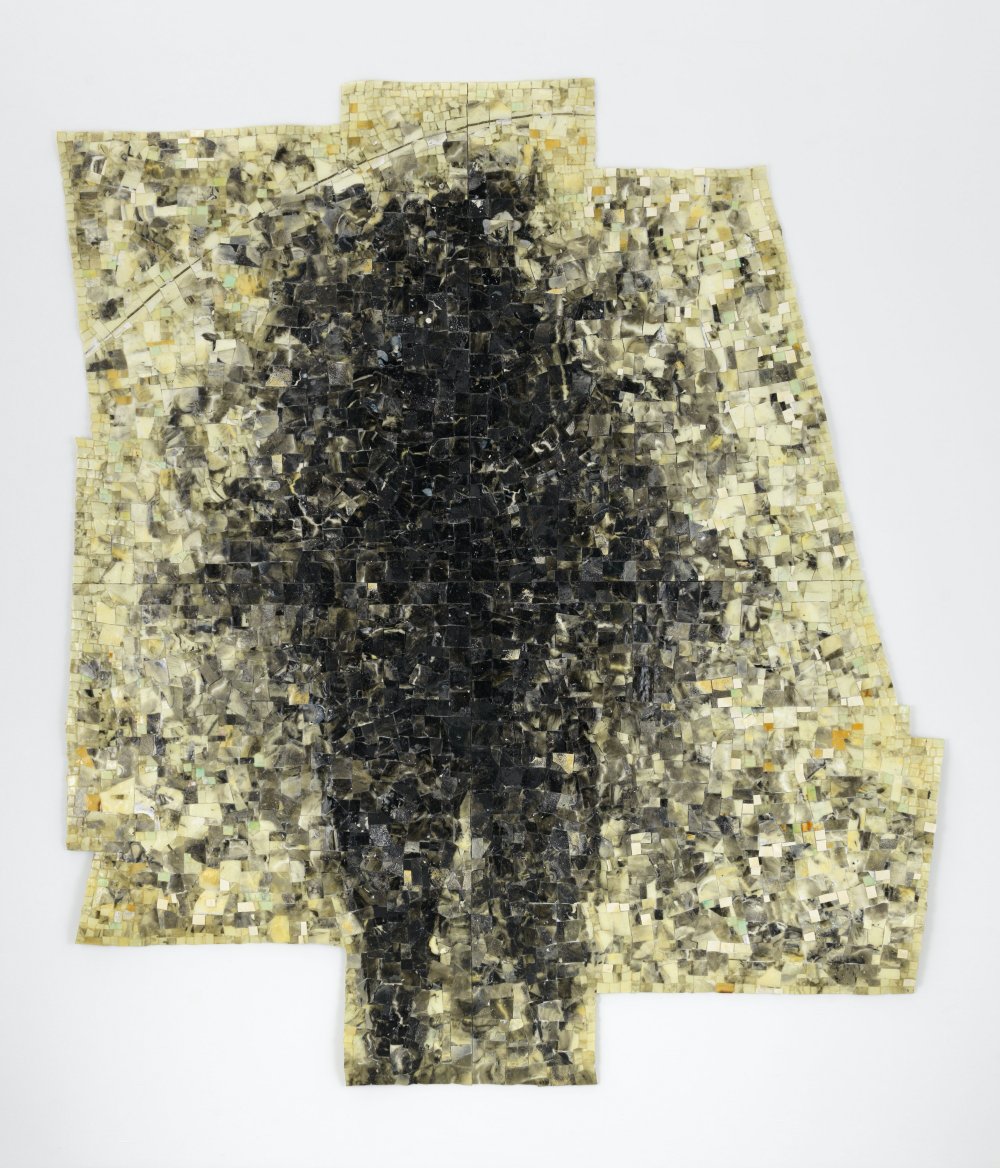 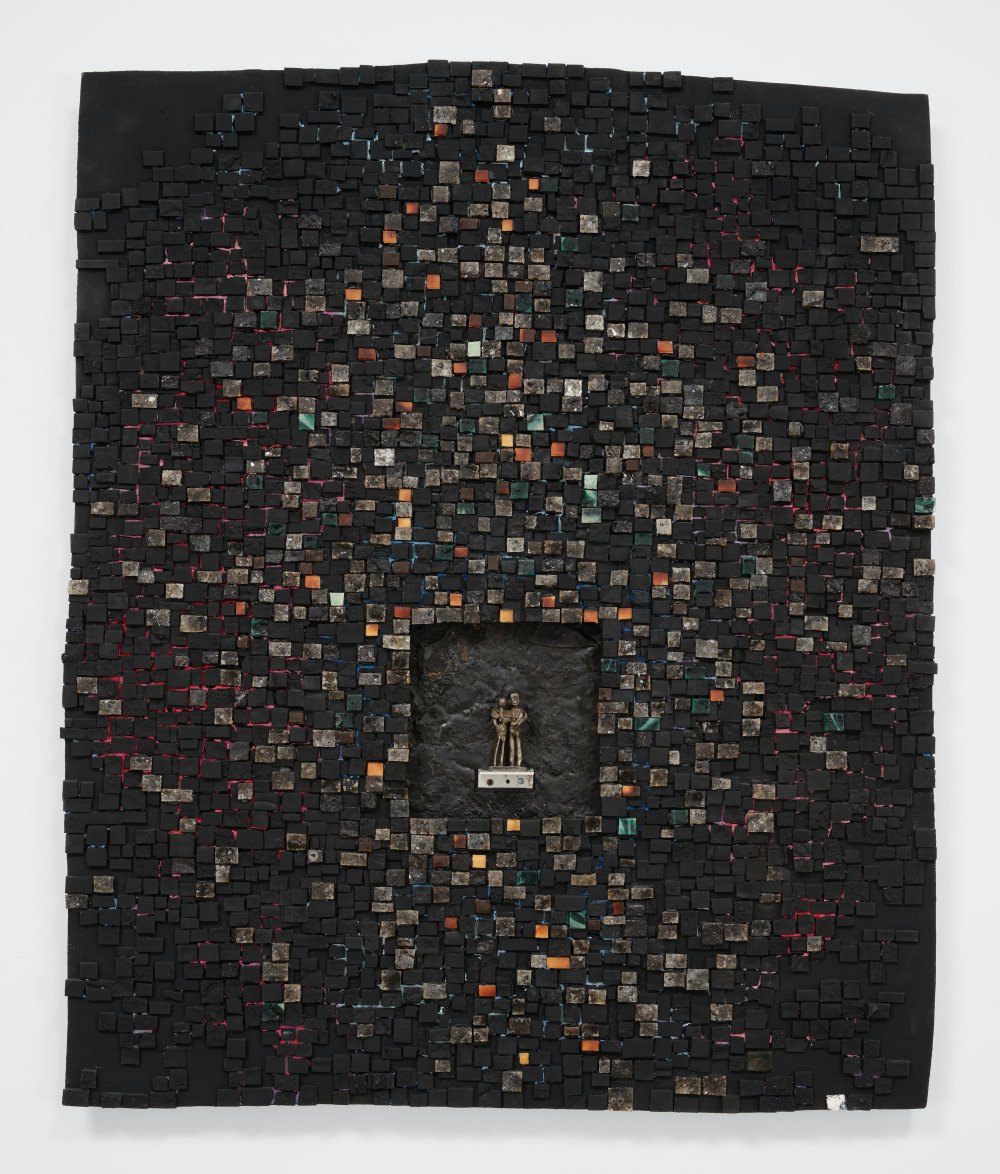 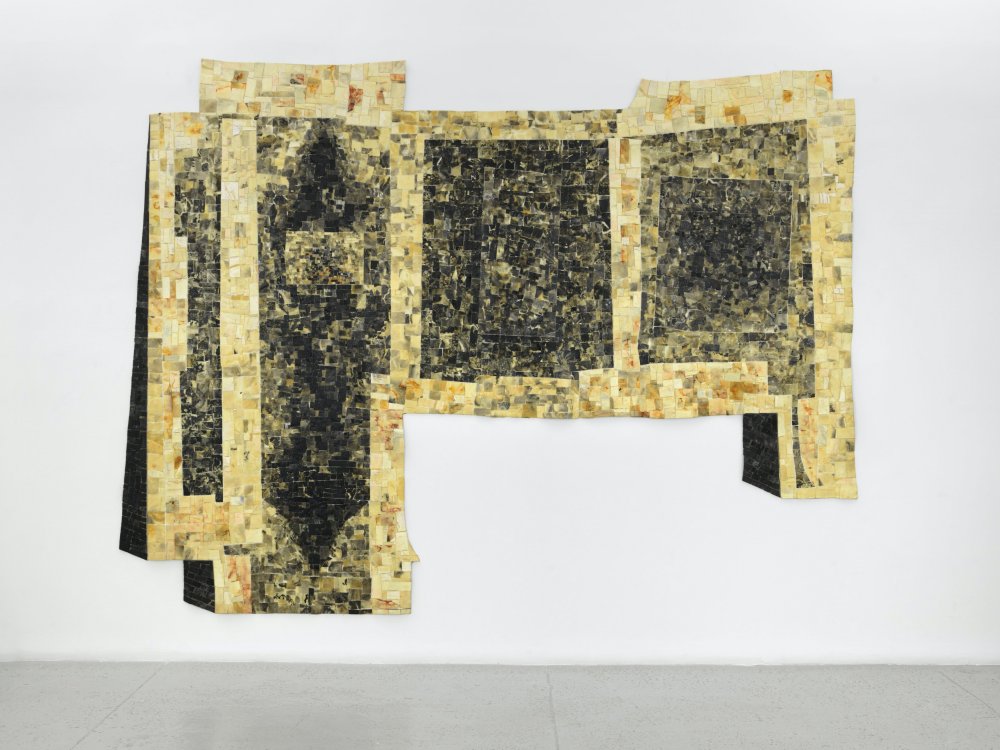 Jack Whitten
Windows Of The Mind: A Monument Dedicated To The Power Of Painting!, 1995 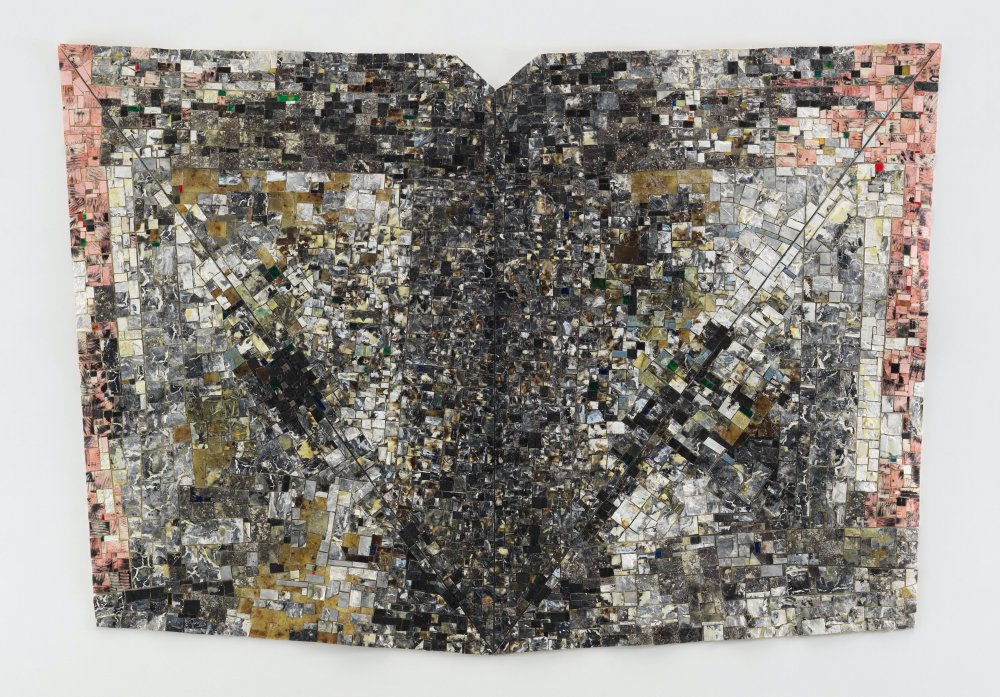 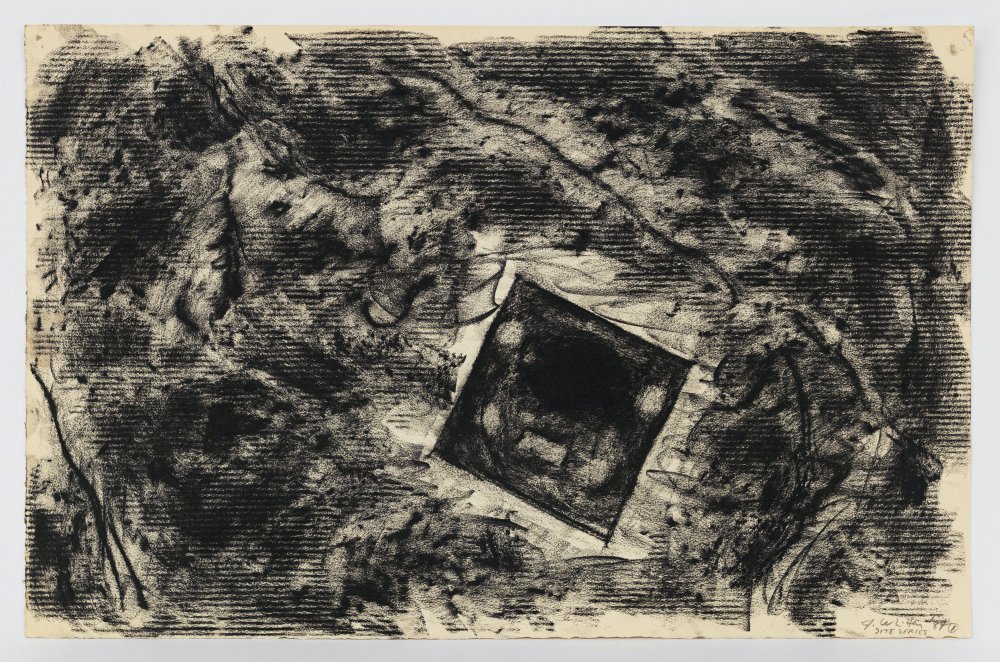 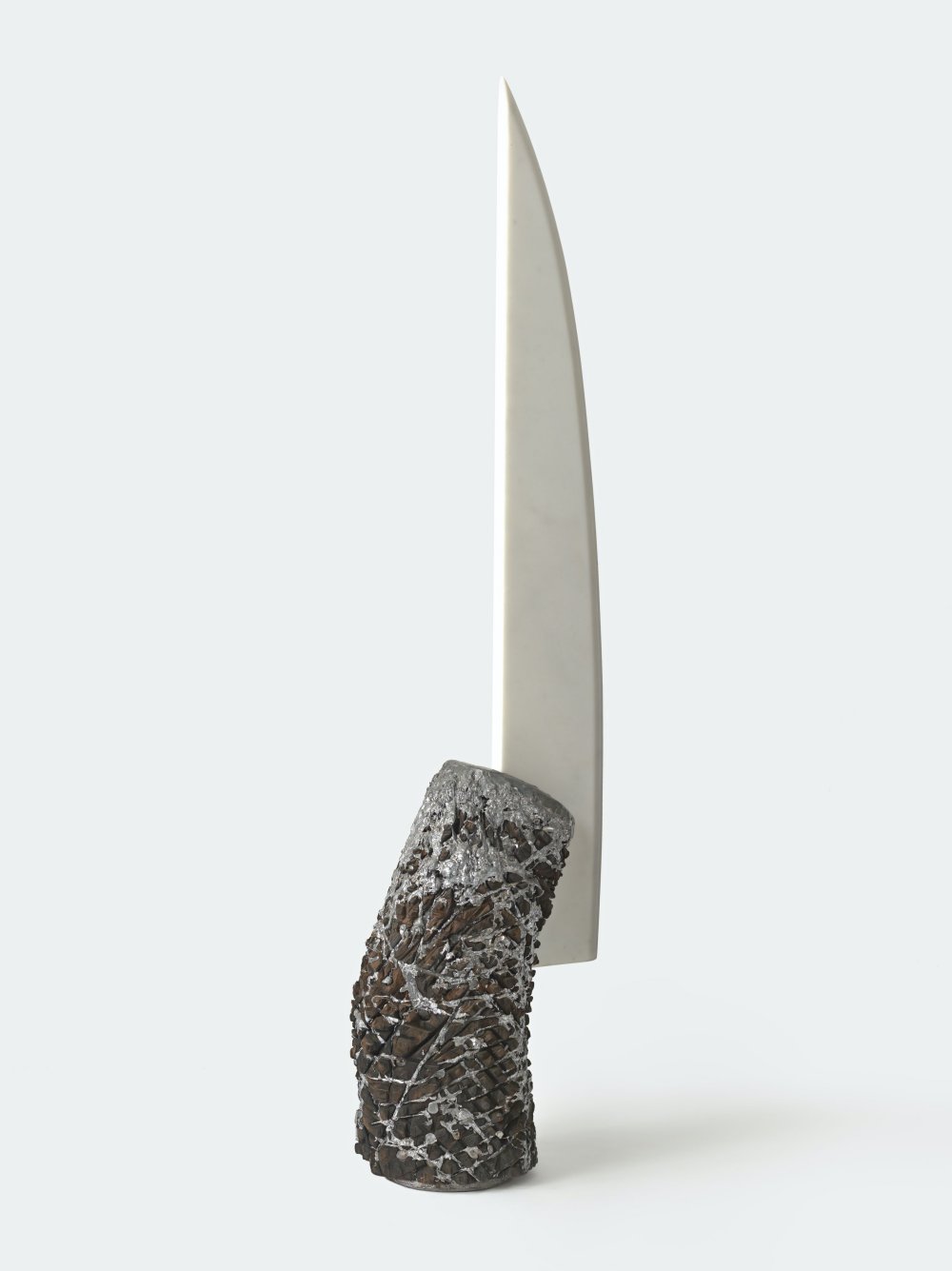 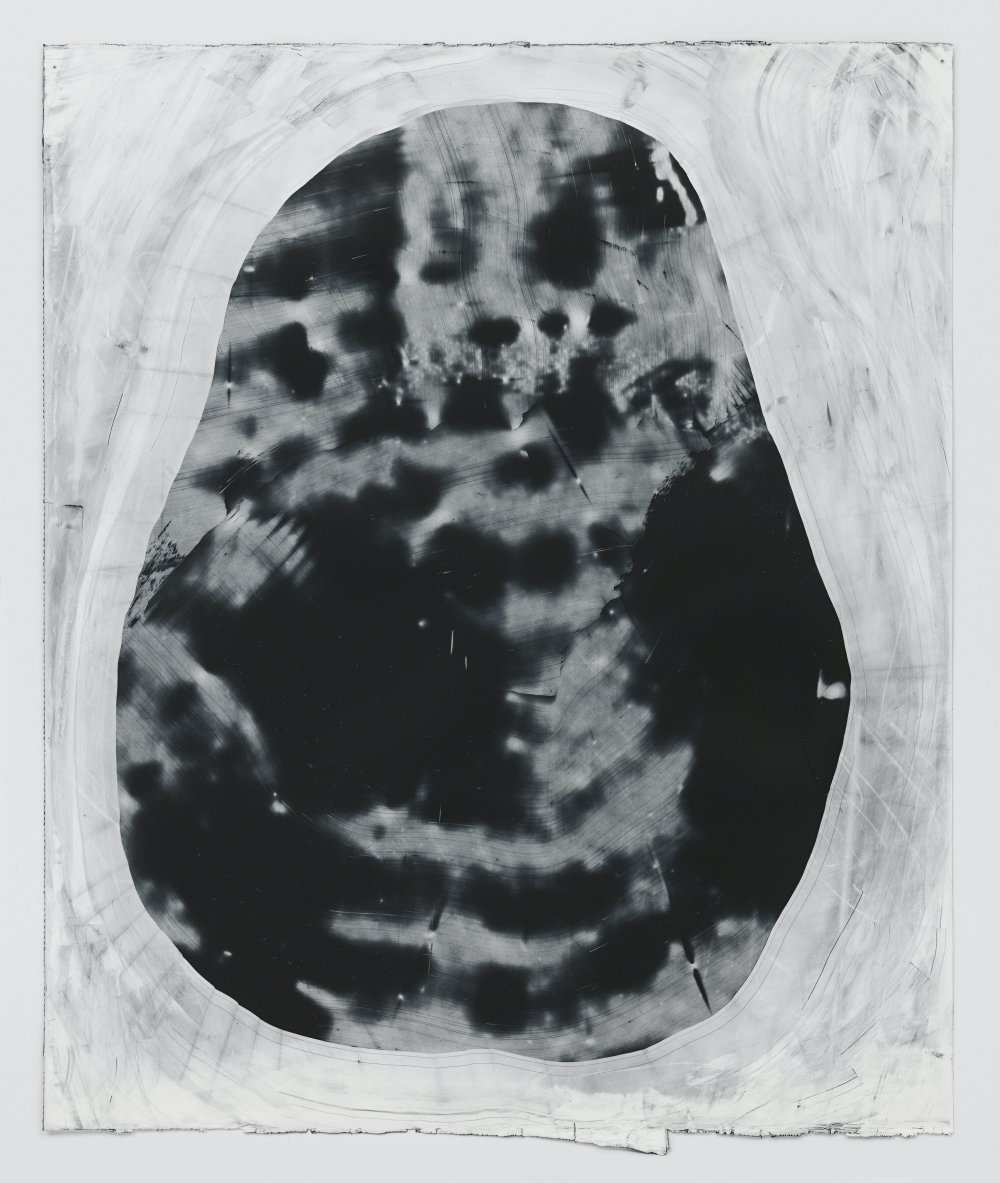 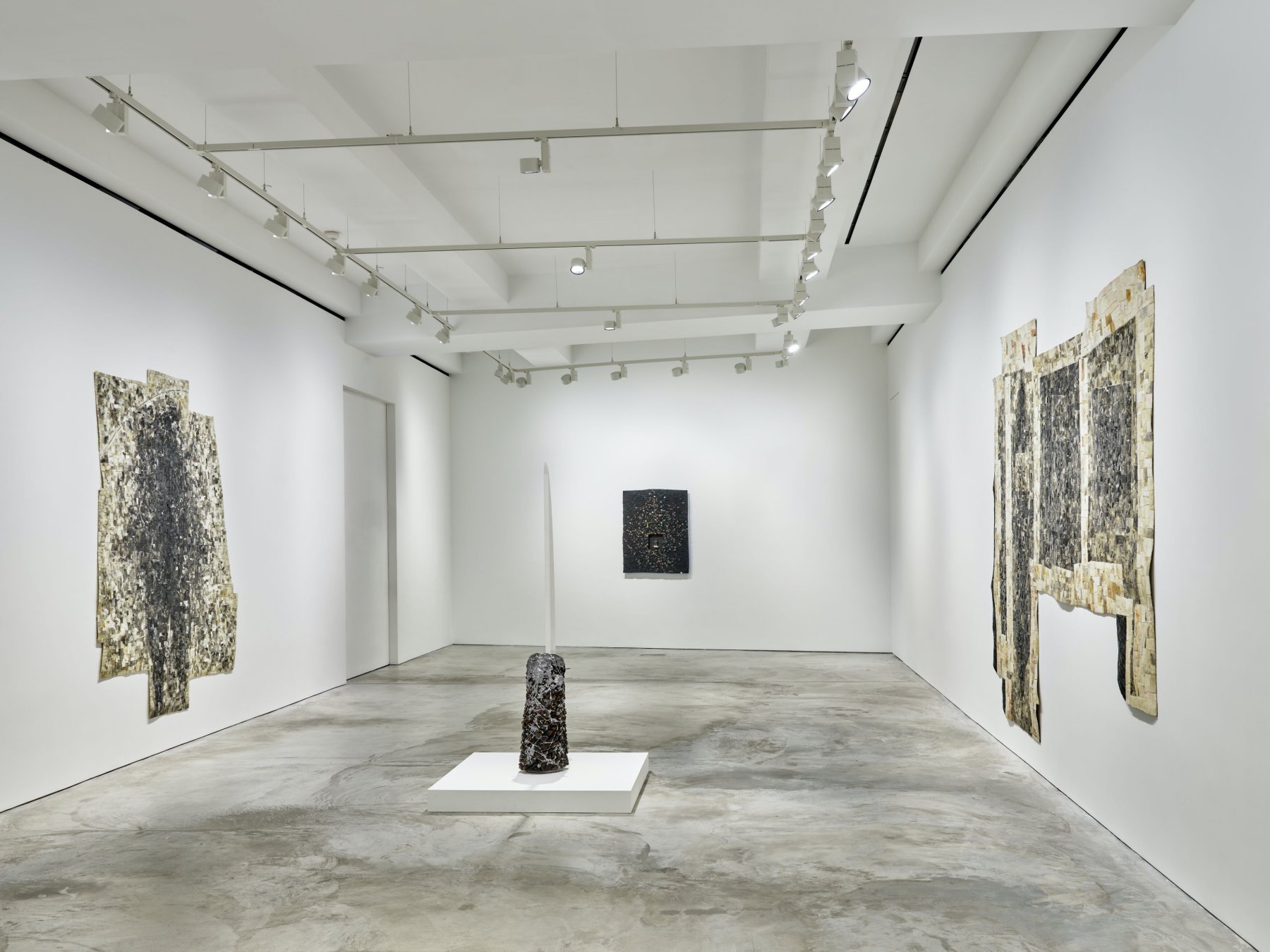 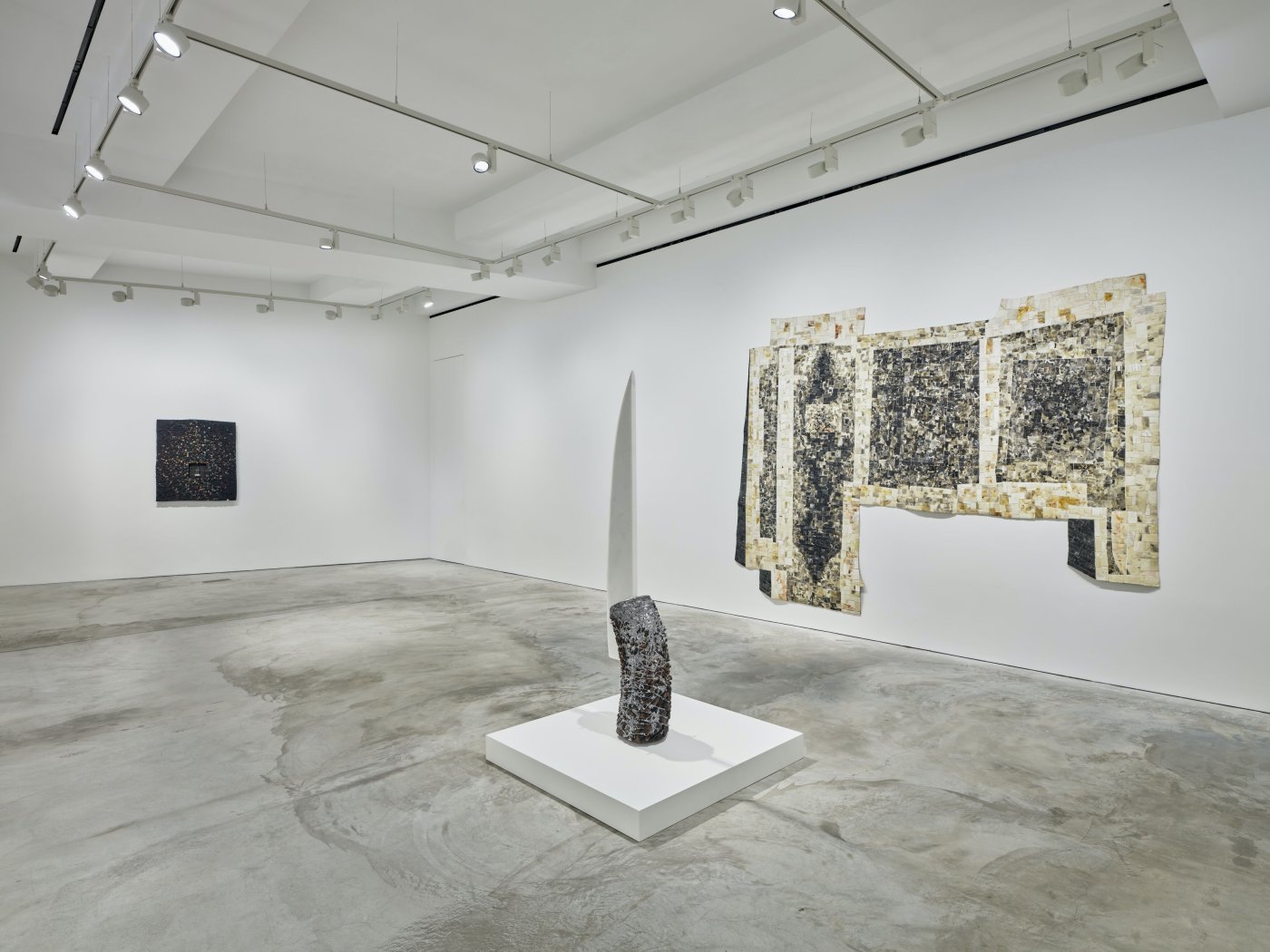 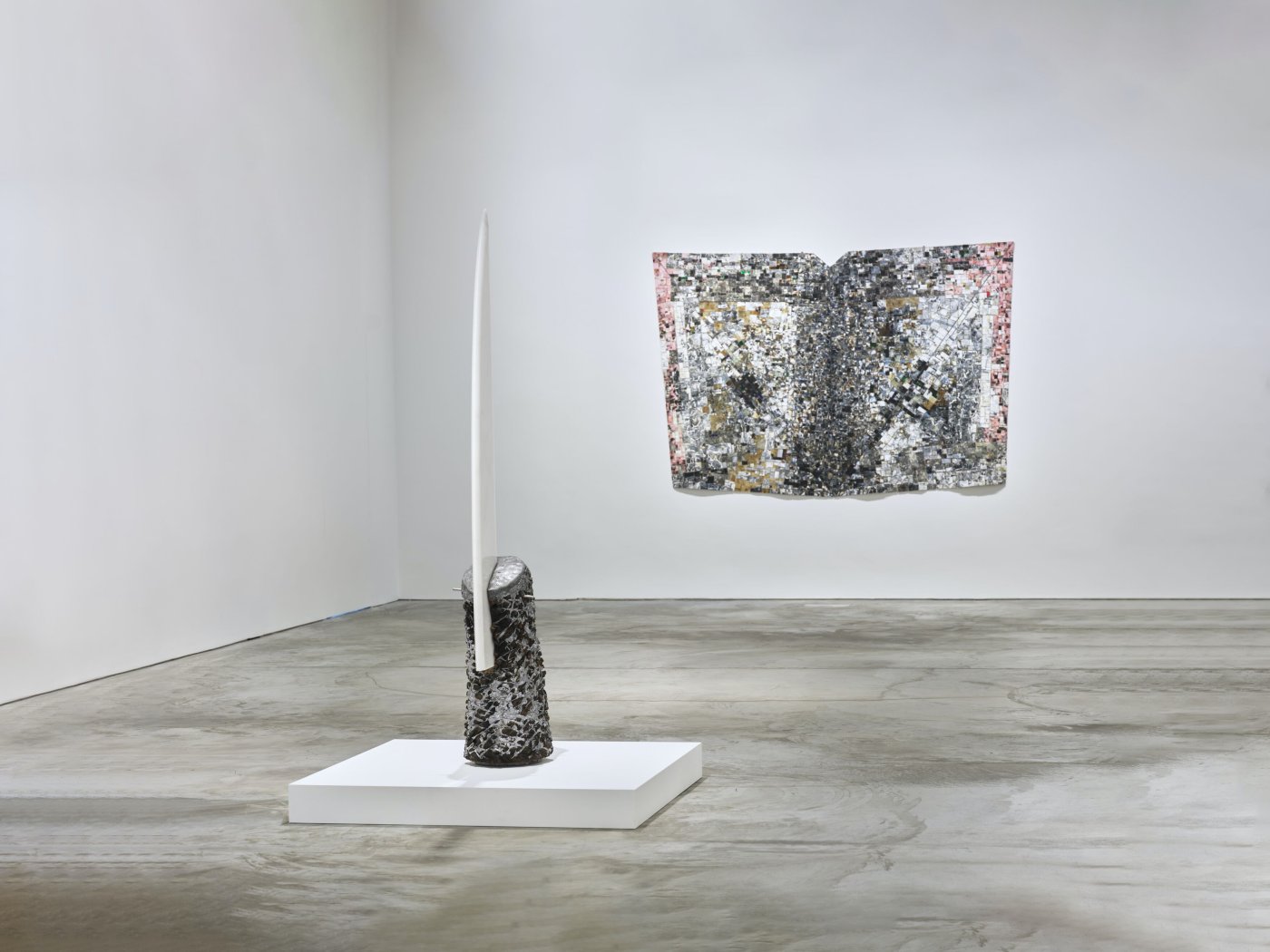 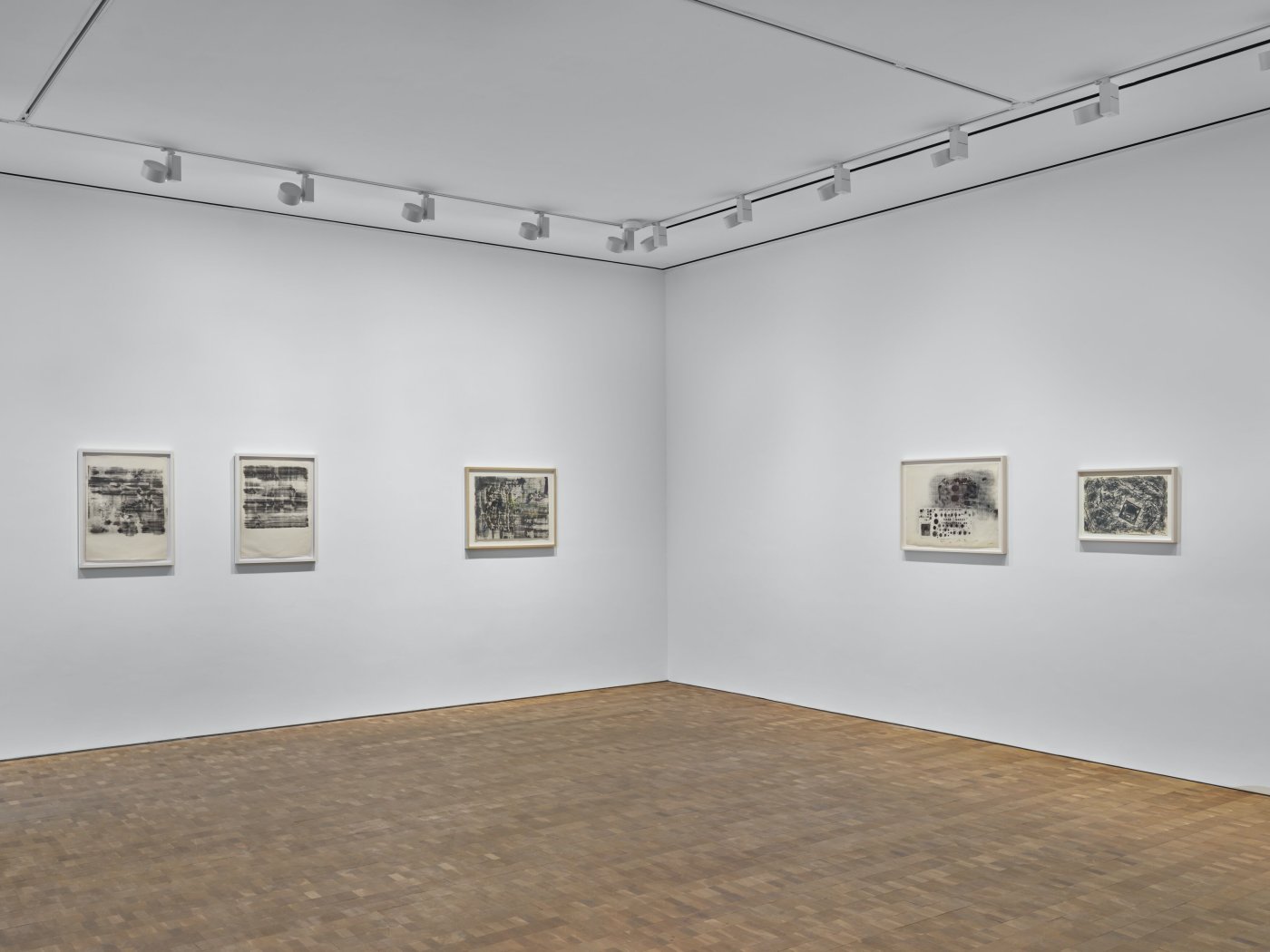 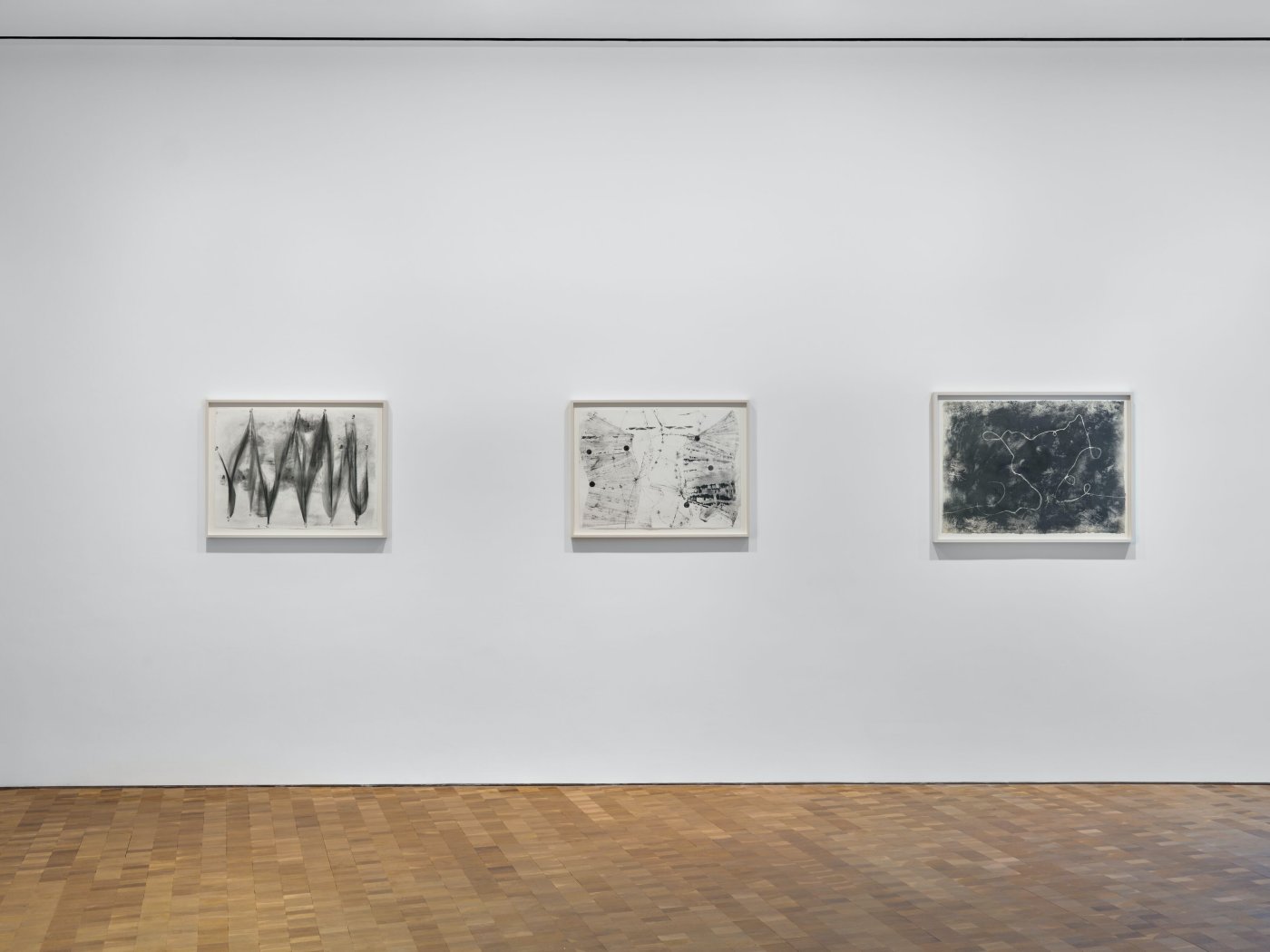 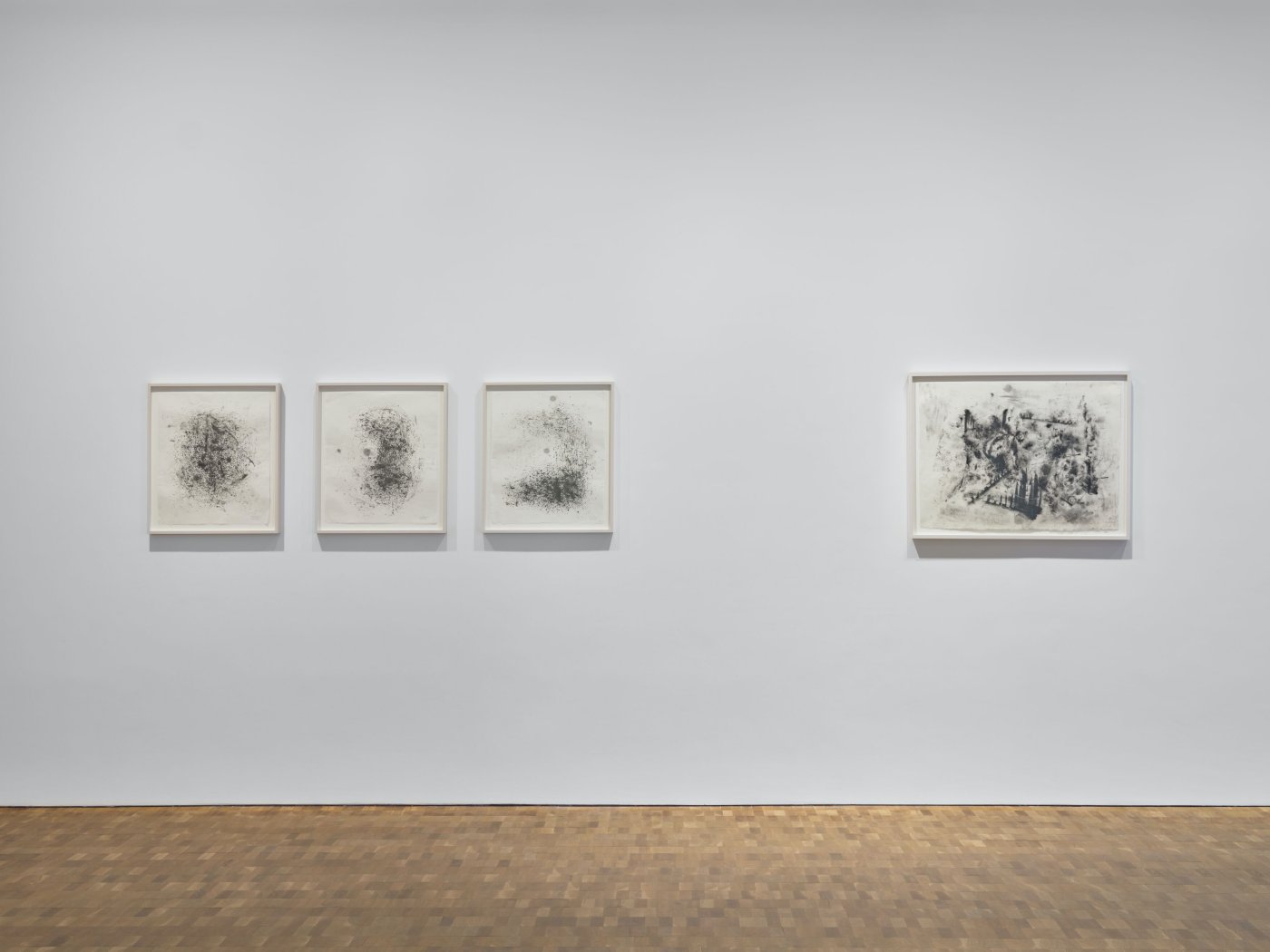 Consisting of rarely seen paintings, sculpture and works on paper, the exhibition highlights a selection of works from the 1960s through 2010s. Blurring the boundaries between sculpture and painting, and between the artist’s studio and the world outside, the multidimensional paintings on view combine geometric abstraction and found objects to mine spiritual and metaphysical thematic veins. Works on paper emphasize the artist’s playfulness and improvisational skill in searching for his own special visual language, a testament to his commitment to drawing as a means to make manifest his ideas and advance his methods. Together, the works on view reveal an artist of extraordinary sensitivity, capable of imbuing modernist abstraction with the vibrations of historical narratives and bringing the spiritual and material realms into alignment.

The upper floor of the gallery is dedicated to Whitten’s monumental paintings from the 1990s, which are outstanding examples of Whitten’s astute attention to process and experimentation with the materiality of paint. Imposing in scale and dramatic in composition, ‘Natural Selection’ (1995) skillfully shatters the conventional boundaries between painting and sculpture. To create this work, Whitten poured acrylic paint into moulds made from found materials, such as bottle caps, corrugated cardboard, and discarded plastic. Once dry, he removed the hardened acrylic units of paint – which he called ‘tesserae’, and applied them onto the canvas. The result is a mesmerising dissolution of spatial depth and a striking phosphorescent mosaic, reminiscent of Mediterranean tiling and sacred stained-glass windows. While ‘Natural Selection’ is seemingly monotone in appearance, the individual ‘tesserae’ are brilliantly coloured with jewelled yellow ochre, amber and emerald tones.

The largest-scale work in the exhibition is titled ‘Windows Of The Mind: A Monument Dedicated To The Power Of Painting!’ (1995). The formal composition of this work calls to mind the grandeur of classical history paintings, such as the essence of a multi-panel altarpiece of the European Renaissance, resonating with Whitten’s longstanding interest in the history of art. In many ways, Whitten’s practice paralleled that of the great Old Masters – in particular, their ceaseless experimentation, illusory rendition of three-dimensional space and the manipulation of natural light through paint. A bay-like window frame, made of miniature yellow-ochre and opal tiles, leads the viewer’s gaze into a dark void with faint, geometric shapes that hover in the distance. By doing so, Whitten creates striking perspectival lines that evoke the construction of Old Master space, despite not aligning to formal perspective systems.

Over the years Whitten made works in homage to a wide range of people whom he admired. His renowned ‘Black Monolith’ series consists of tributes to influential African American innovators, many of whom he knew personally and whose political or cultural contributions he wanted to honour. He strove to capture the essence of his subjects in symbolic abstractions. These laid the groundwork for the subsequent ‘Totem’ and ‘Mask’ works. ‘Mask II: For Ronald Brown’ (1996) is a highly sculptural canvas dedicated to the United States Secretary of Commerce in President Bill Clinton’s cabinet and Chairman of the Democratic National Committee. The first African American to hold these positions, Brown was credited with helping to unite the Democratic Party behind Clinton. On April 3, 1996, while on an official trade mission, Brown died in a plane crash in Croatia along with 34 other passengers. Prompted by his natural inclination to pay tribute, Whitten created ‘Mask II’ to celebrate the life of Brown while also mourning the public tragedy of his death. Another extraordinary work that exemplifies Jack Whitten’s experimental techniques and ingeniously innovative compositions, ‘The Mingo Altarpiece: For George Mingo 14 September 1950 – 6 December 1996’ is another intensely personal tribute. Composed of Whitten’s hallmark tesserae or tessellated squares, ‘The Mingo Altarpiece’ is multifunctional: it is a portrait as much as it is an homage. At the work’s center is a sculpture by George Mingo, a former student of Whitten’s at Cooper Union, to whom the work is dedicated.

The exhibition also includes a significant sculpture titled ‘The Apollonian Sword’ (2014), which was on view in Whitten’s major museum show ‘Odyssey: Jack Whitten Sculpture, 1963–2017’ at the Met Breuer in 2018. The title refers to the Greek god Apollo, who stands for beauty and refinement. The base refers to the god Dionysus, who is wild and savage. Whitten made this sculpture to put these forces in balance. Near the end of his life, Whitten produced a series of masterpieces featuring thin, blade-like pieces of smooth white marble protruding from bases of wood, some of it charred black, and poured molten lead. For this piece, which is over six feet tall, he attacked a chunk of black mulberry wood with a chain saw and drill, then set it on fire. He polished the marble by hand. After setting the marble into the wood and securing it with a metal pin, he poured molten lead into a cavity, letting it sear the wood and spill over its distressed surface.

The exhibition continues on the lower floor of the gallery, which focuses on Whitten’s works on paper. His analysis of the properties of different mediums engaged materials as diverse as watercolor, toner, cuttlefish ink, homemade walnut ink, and endless variety of Japanese and specialty papers. The trial-and-error of Whitten’s methodology can be felt through the multiple versions and renditions he created of particular works, many of which served as preliminary studies for subsequent paintings and monumental series.

Drawing was an integral part of Whitten’s artistic and technical maturation throughout the different phases of his evolution as an artist. The 1960s was a period of self-analysis for Whitten. Drawing from such sources of inspiration as the late Surrealism of Arshile Gorky and the abstraction of Willem de Kooning, as well as his studies of African sculpture, Whitten was driven by an interest in the current political climate of the period and a search for identity. In the 1970s, Whitten experimented with mechanical automation, moving away from gestural mark-making. He relied heavily upon the capacities of non-traditional tools for drawing and painting, finding inspiration in the Xerox machine’s electrostatic printing technology, which allowed him to update his visual vocabulary and manipulate planes and spaces. By the 1980s, Whitten’s predilection for the cosmic and quantum guided his focus further toward advanced science and technology and its relationship to spirituality. For Whitten, syntax – the ability to make sense of opposing systems of thought – was crucial. His artistic production functioned as a bridge between spirit and matter. In the 1990s, Whitten further honed his singular talent for transfiguring materials beyond their original intended uses. Experimenting with Sumi ink in the ‘Presence’ series, and metal filings in the ‘Assassin’ series, he constructed, deconstructed, and reconfigured forms. In the 2000s, Whitten combined wax or glitter with powdered pigment and acrylic to arrive at new expressive hybrids. More than an effective medium for Whitten, working on paper was akin to scientific research. With an aesthetic hypothesis in mind, he worked tirelessly on paper to both subvert and elevate the history of art and how best to represent the many layers of information packed inside his imagination.