Iulian Bisericaru: Zoom In, Zoom Out

Iulian Bisericaru: Zoom In, Zoom Out

There will be people and they will push the world further.
Radu Vancu, Canto I

For his new solo show at Anca Poterasu Gallery, Iulian Bisericaru delves into his reflection on nature and ecology, connected to the expanding urbanism and the ghosts of the post-industrial. After certain ideological dogmas and fanatic capitalism, how can nature reclaim its rights? What is the rapport between landscape and culture after Romanticism? The painter observes, creates compositions, reproduces, imagines, sublimates… proposing overviewing perspectives, idealised or less so, before zooming in to transform the vegetation into an infinite subject, to then let go and farther away from it yet again… 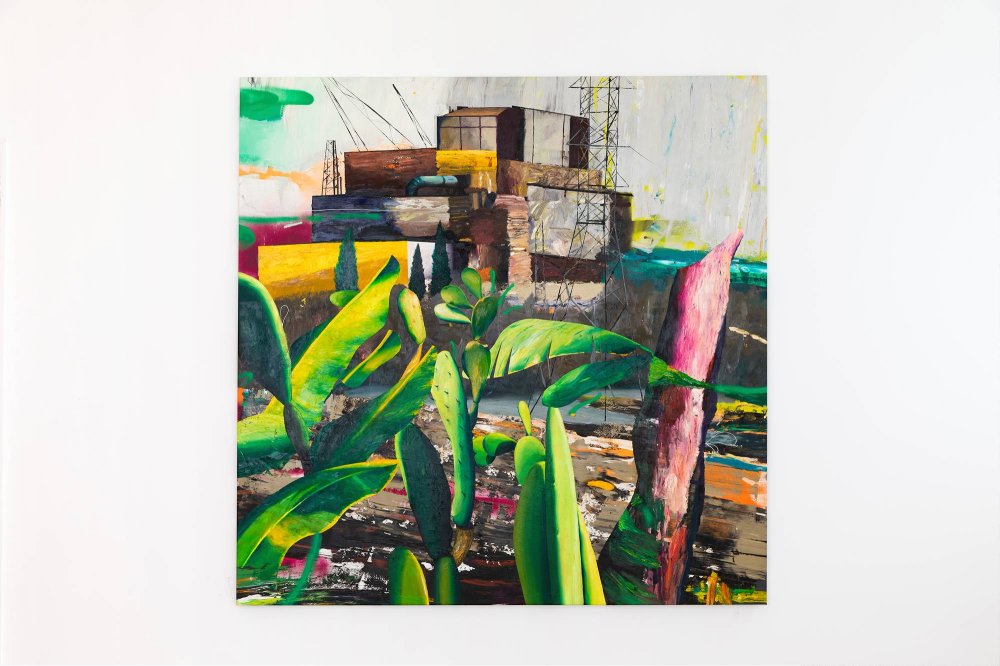 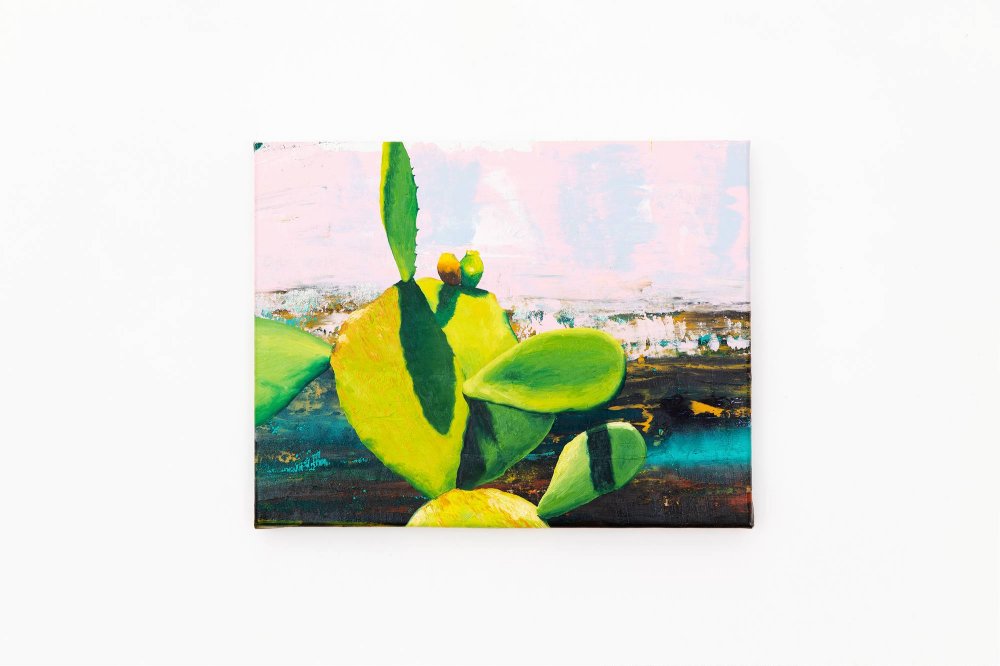 Iulian Bisericaru
Isolation from within 6, 2022 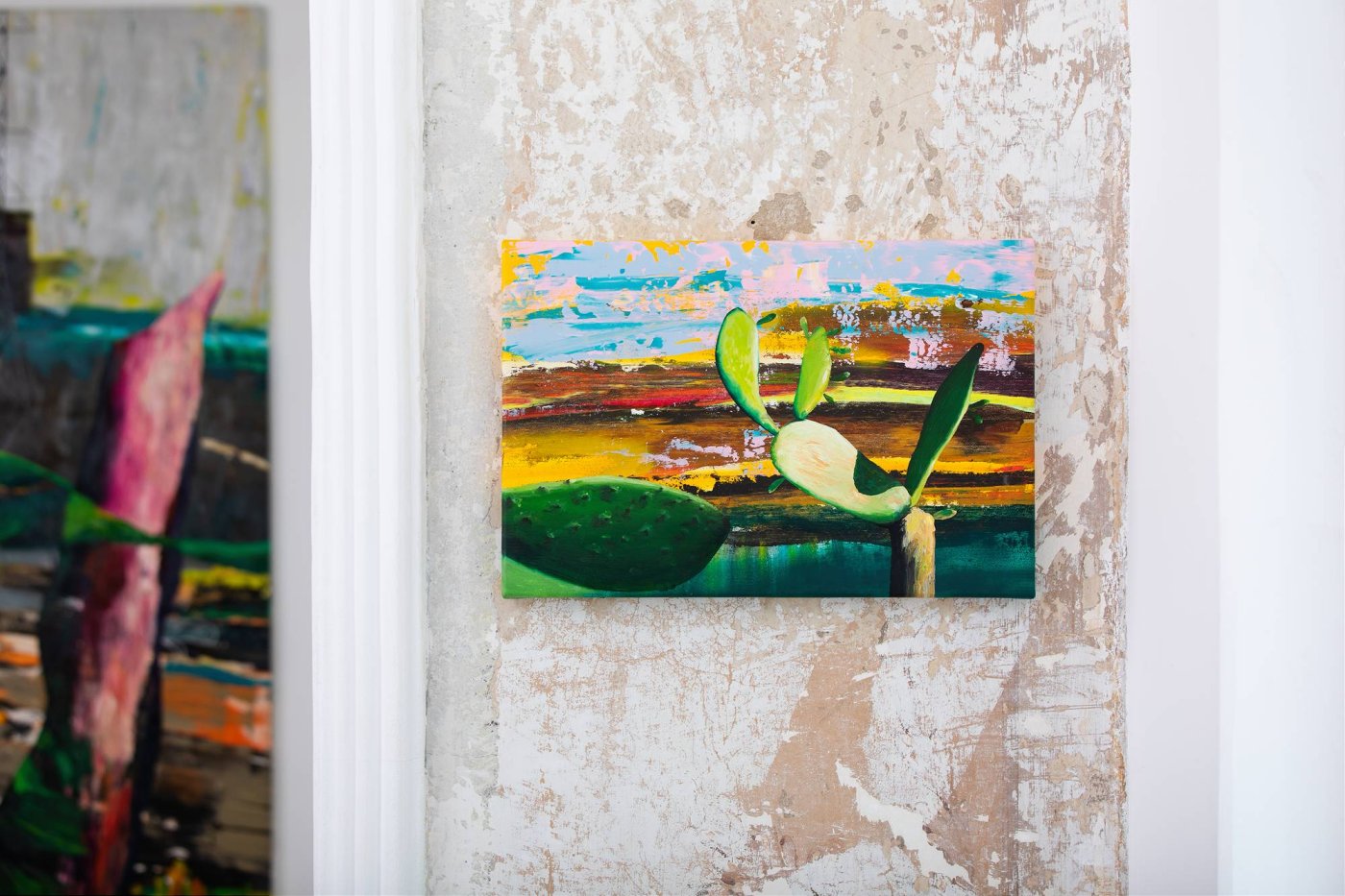 Iulian Bisericaru
Isolation from within 2, 2022 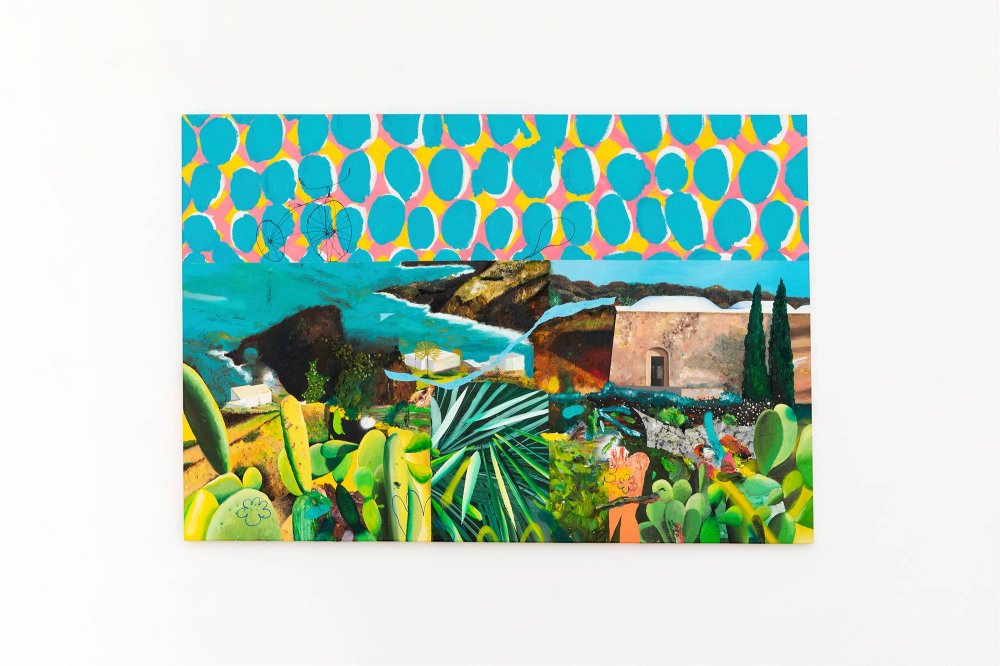 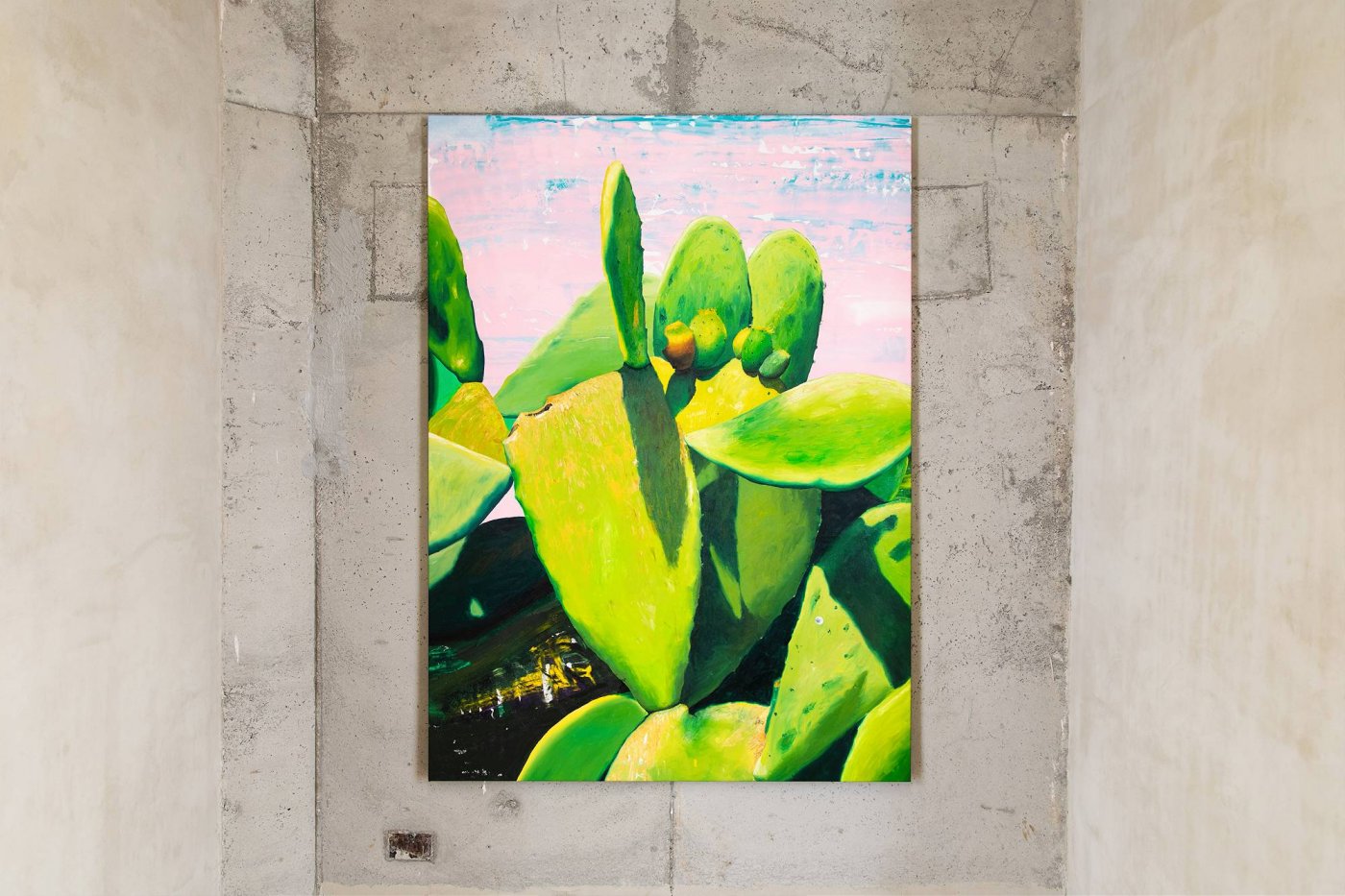 Iulian Bisericaru
Zoom in on my dreams, 2022 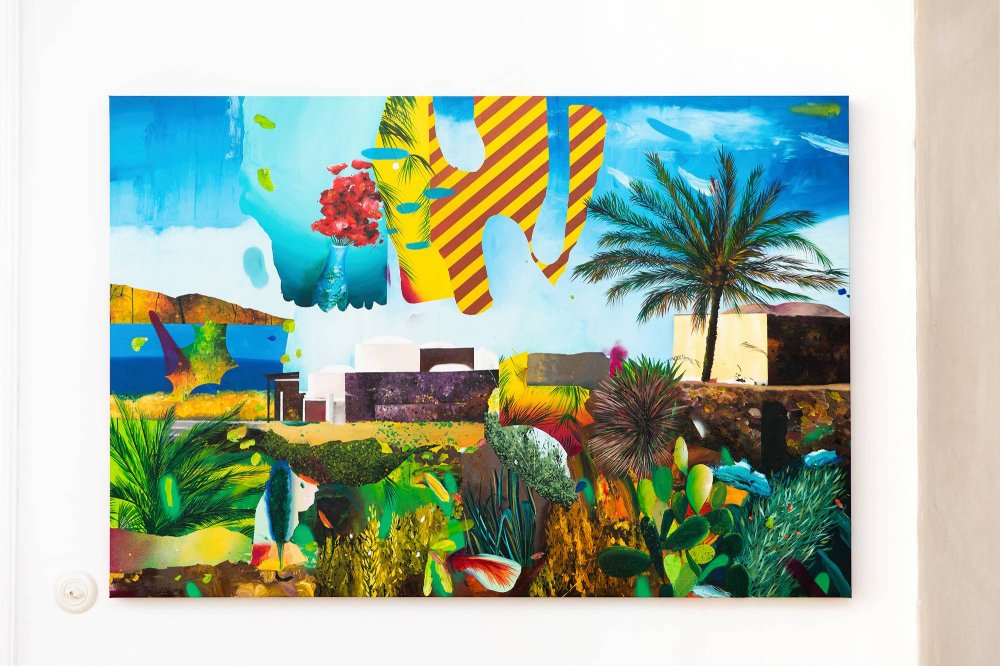 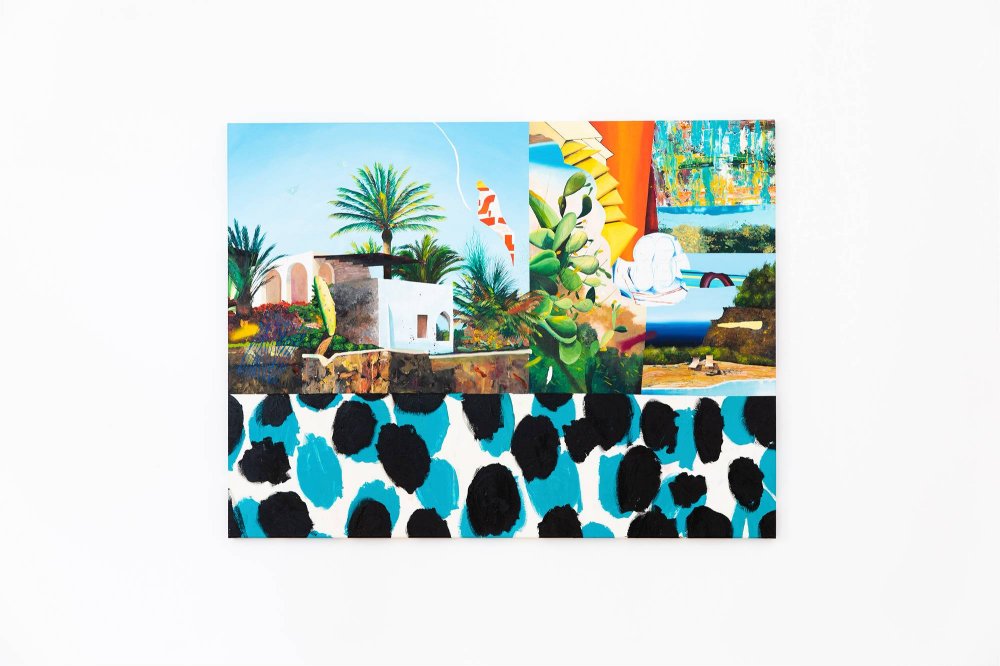 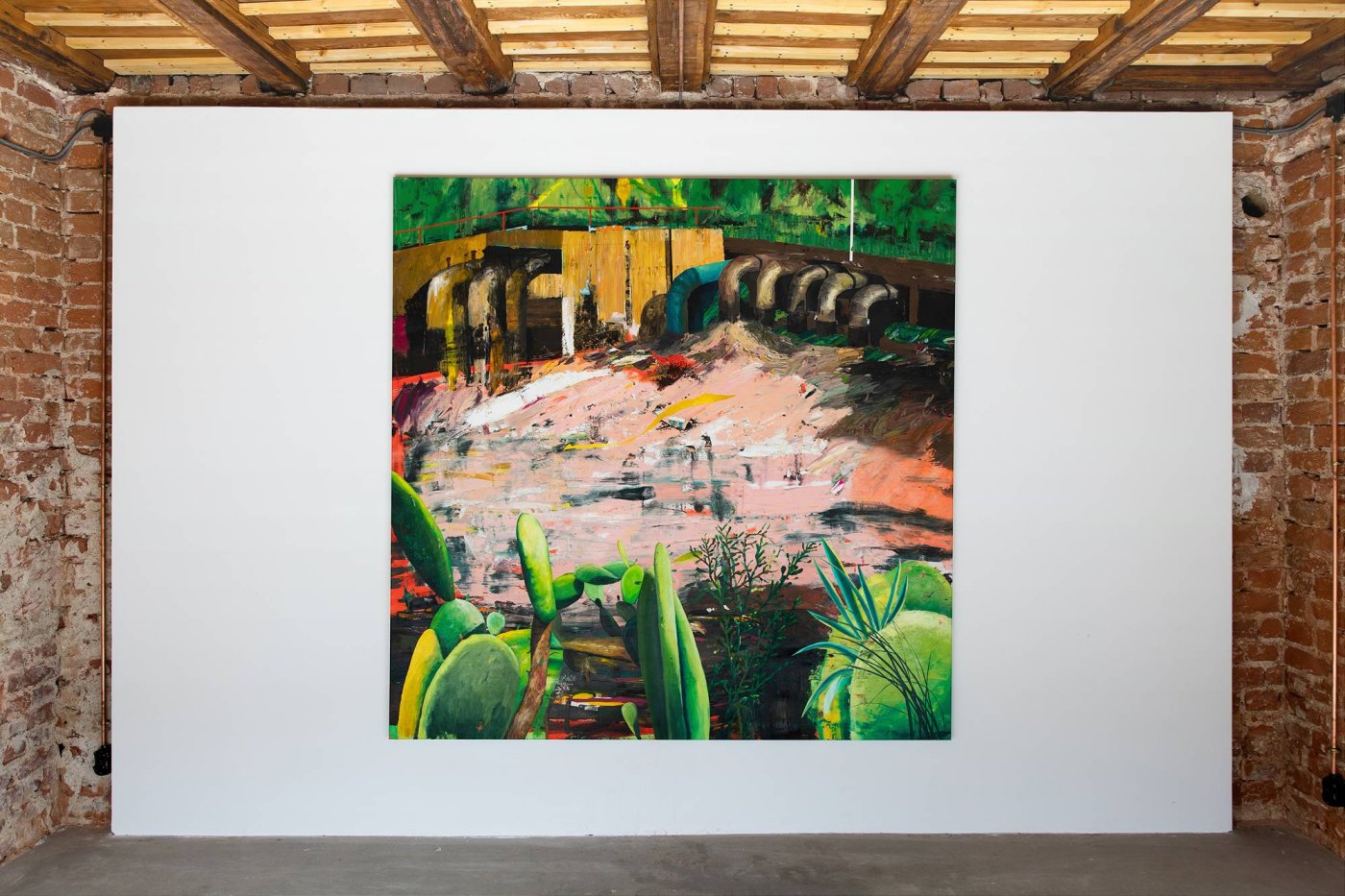 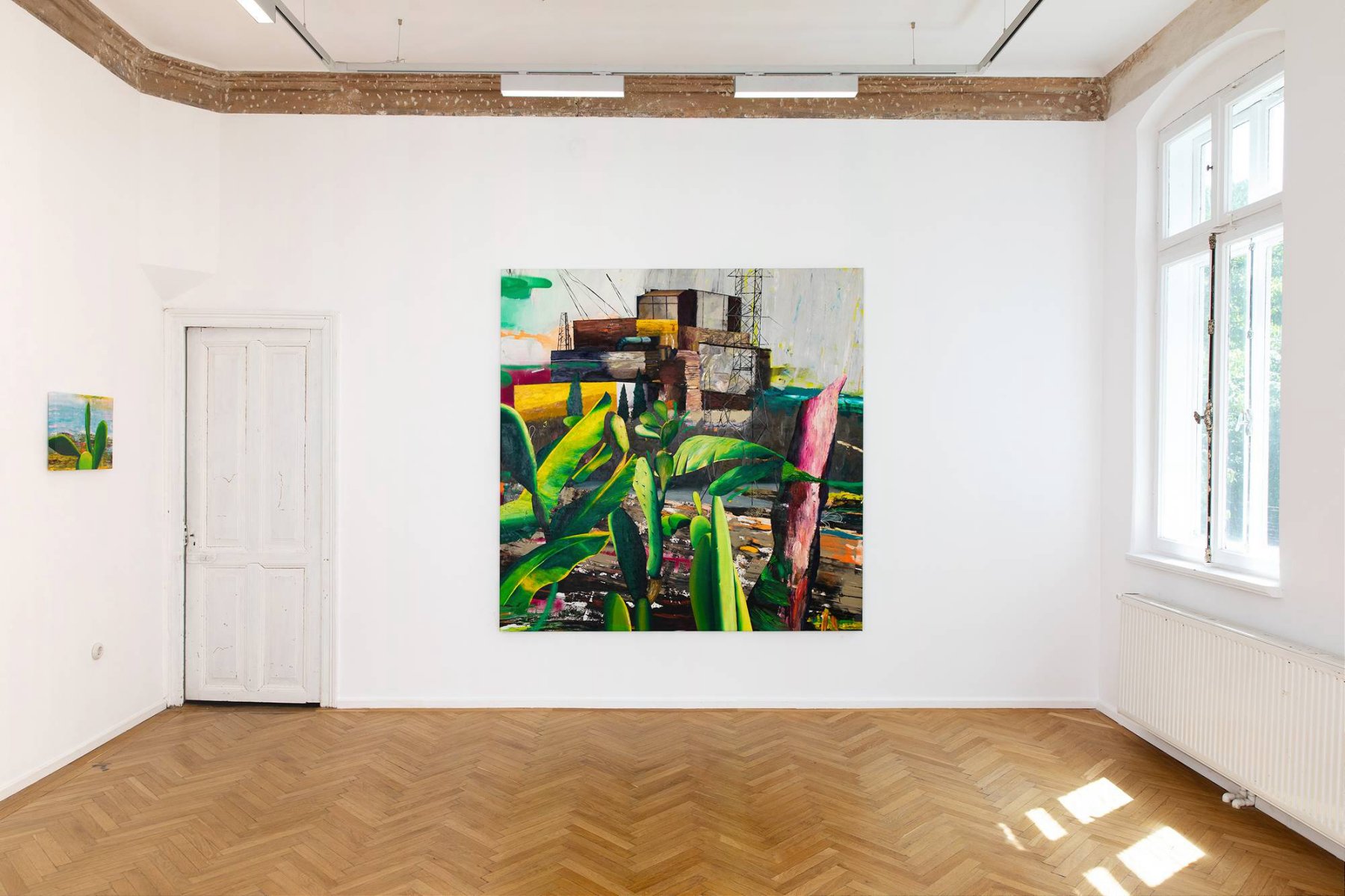 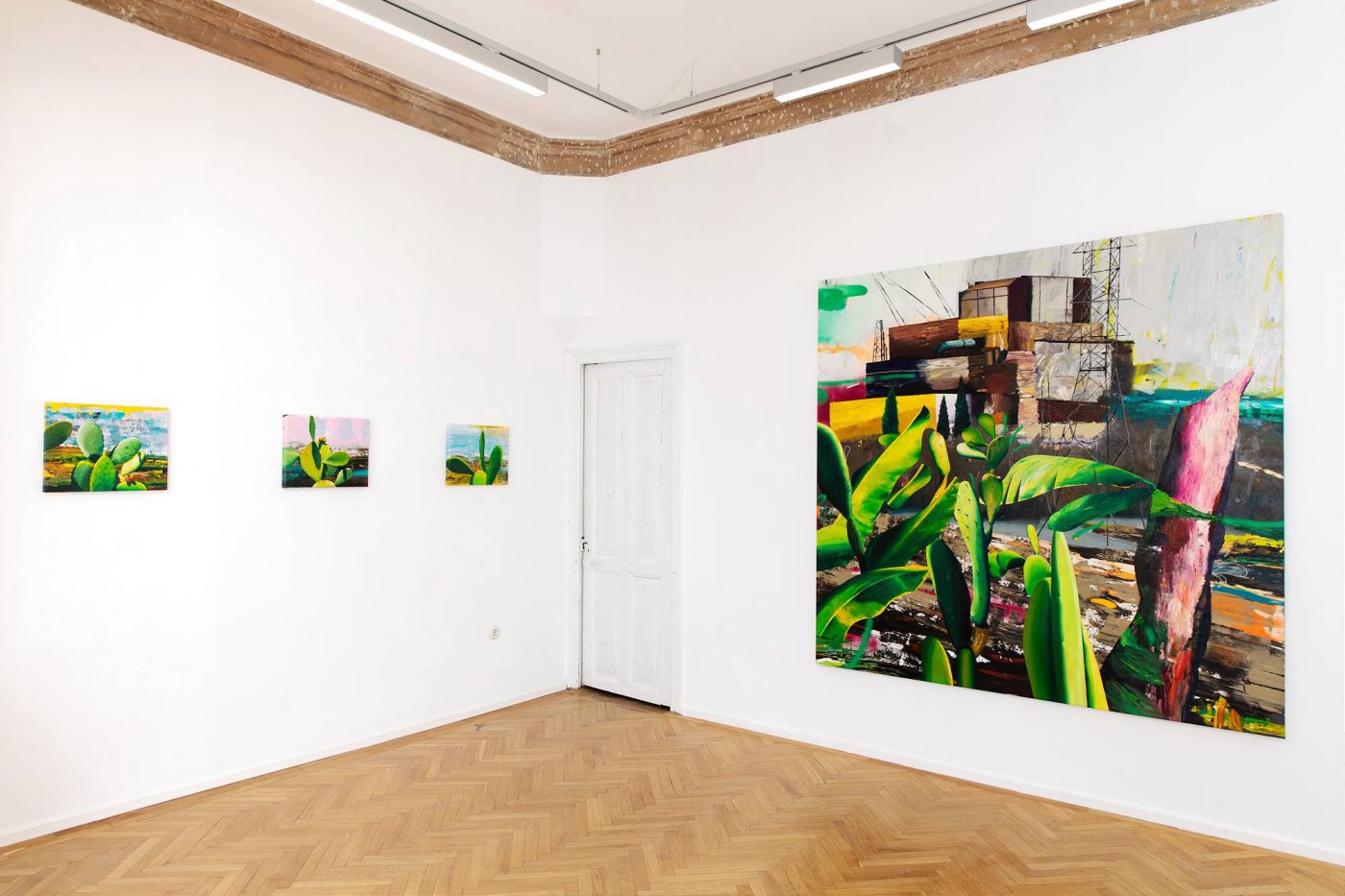 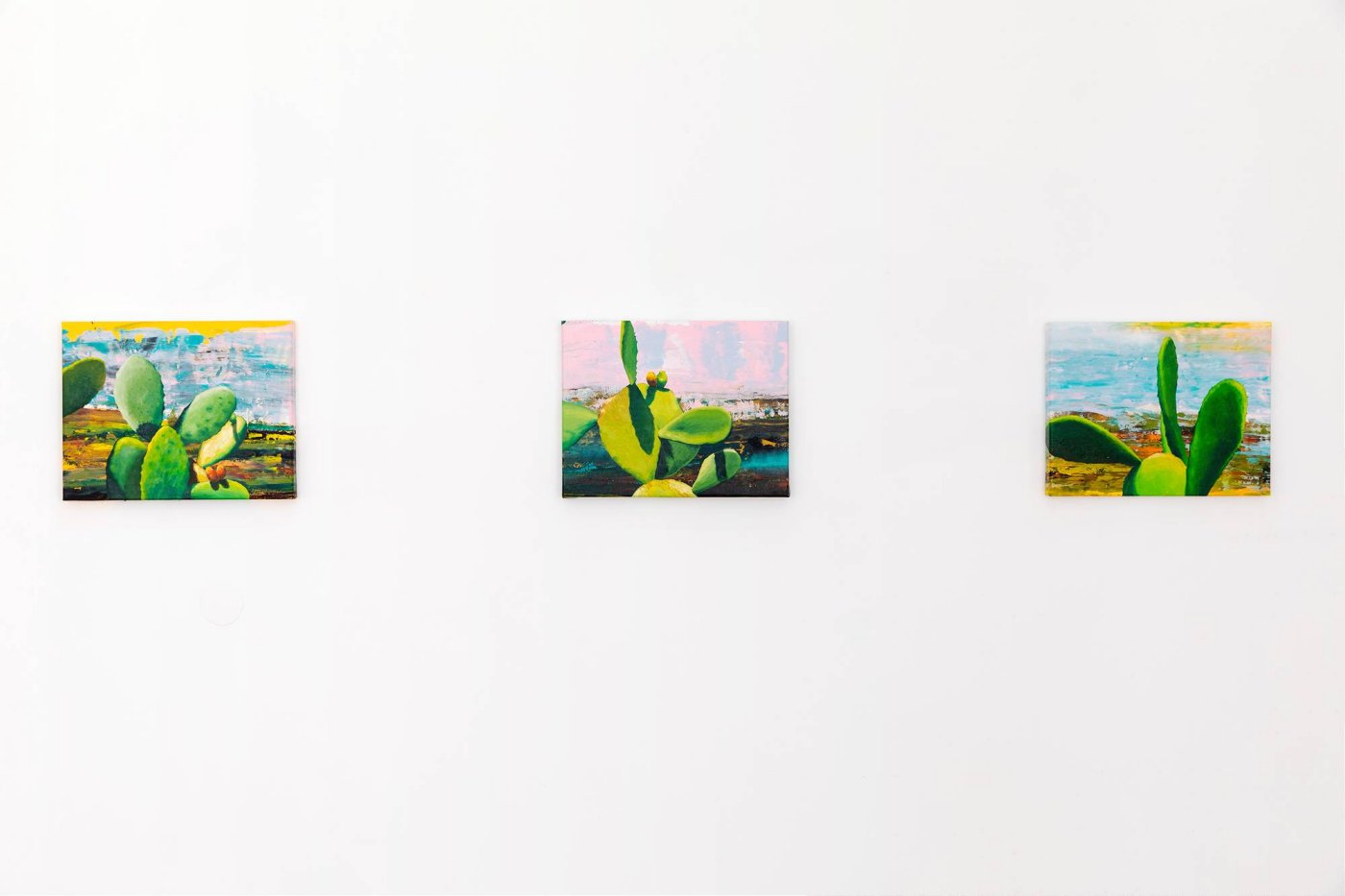 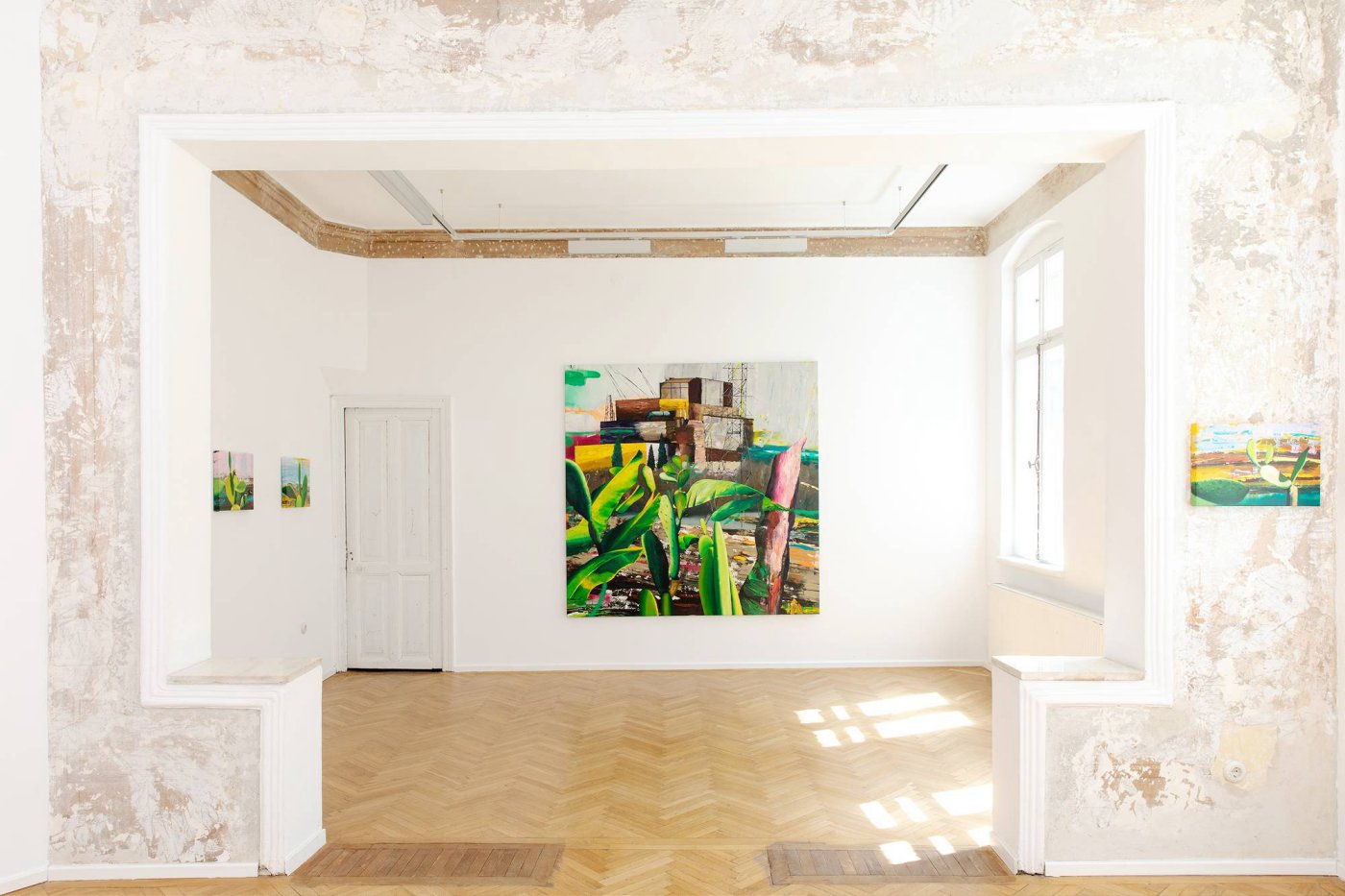 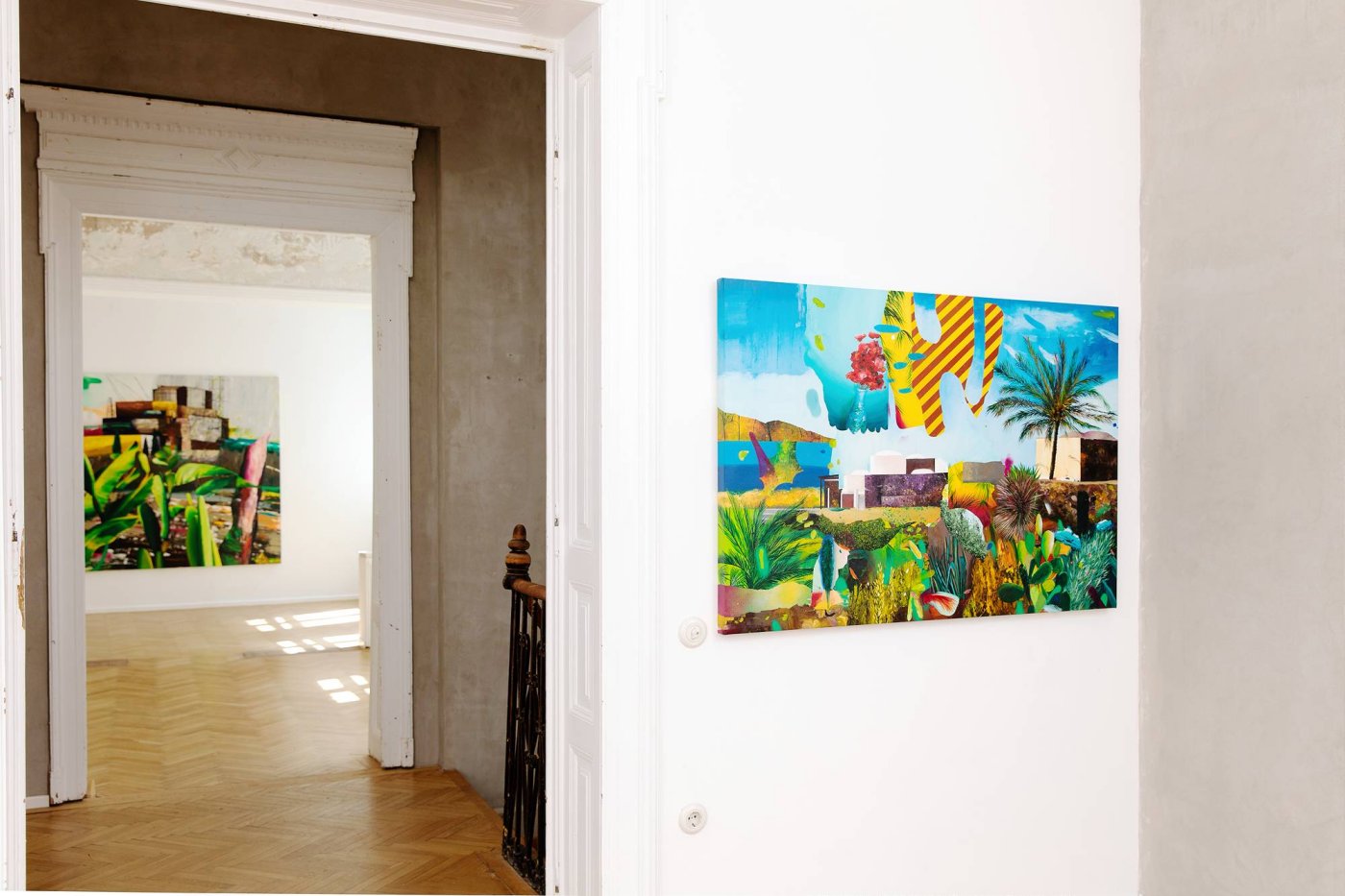 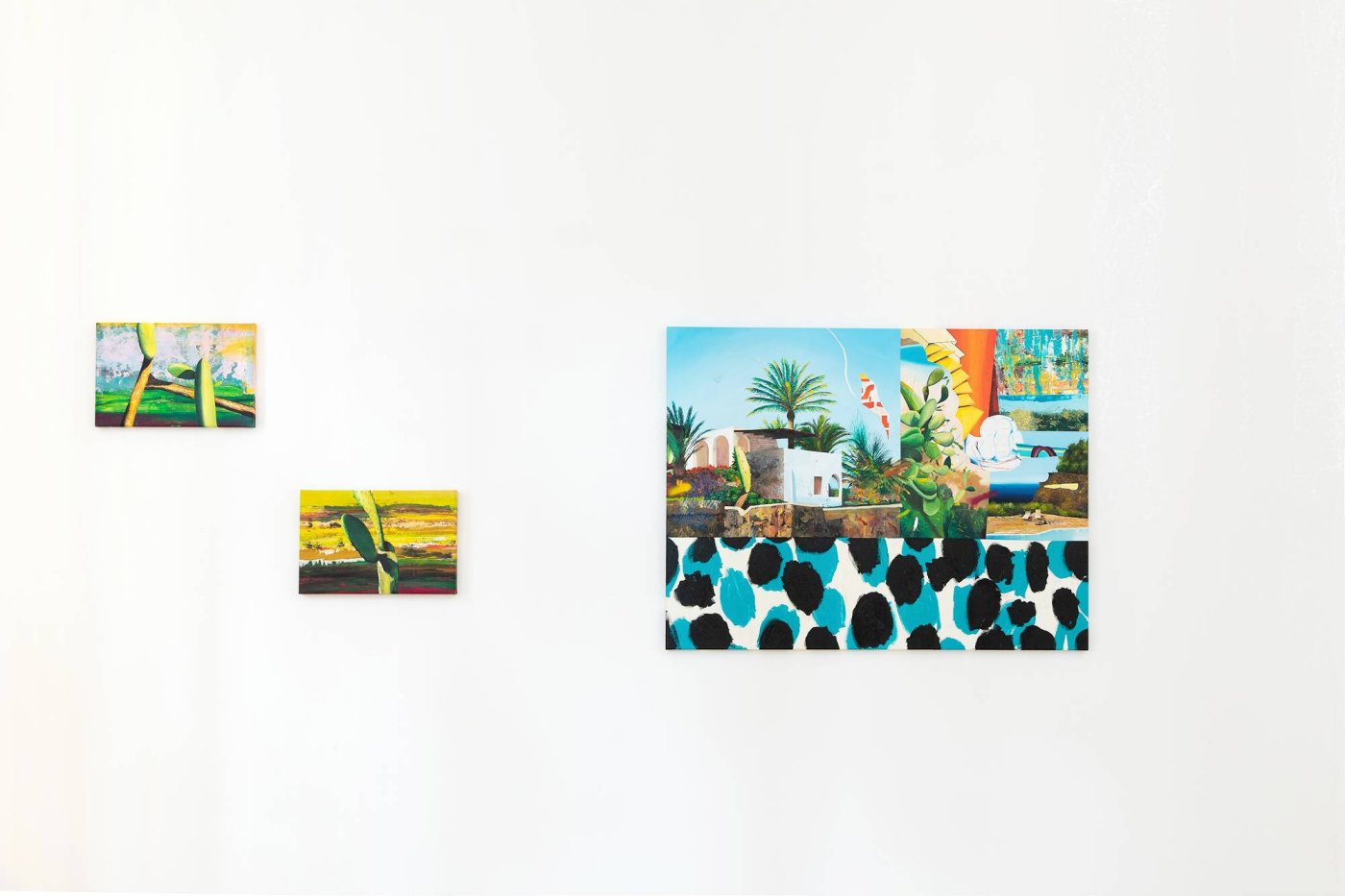 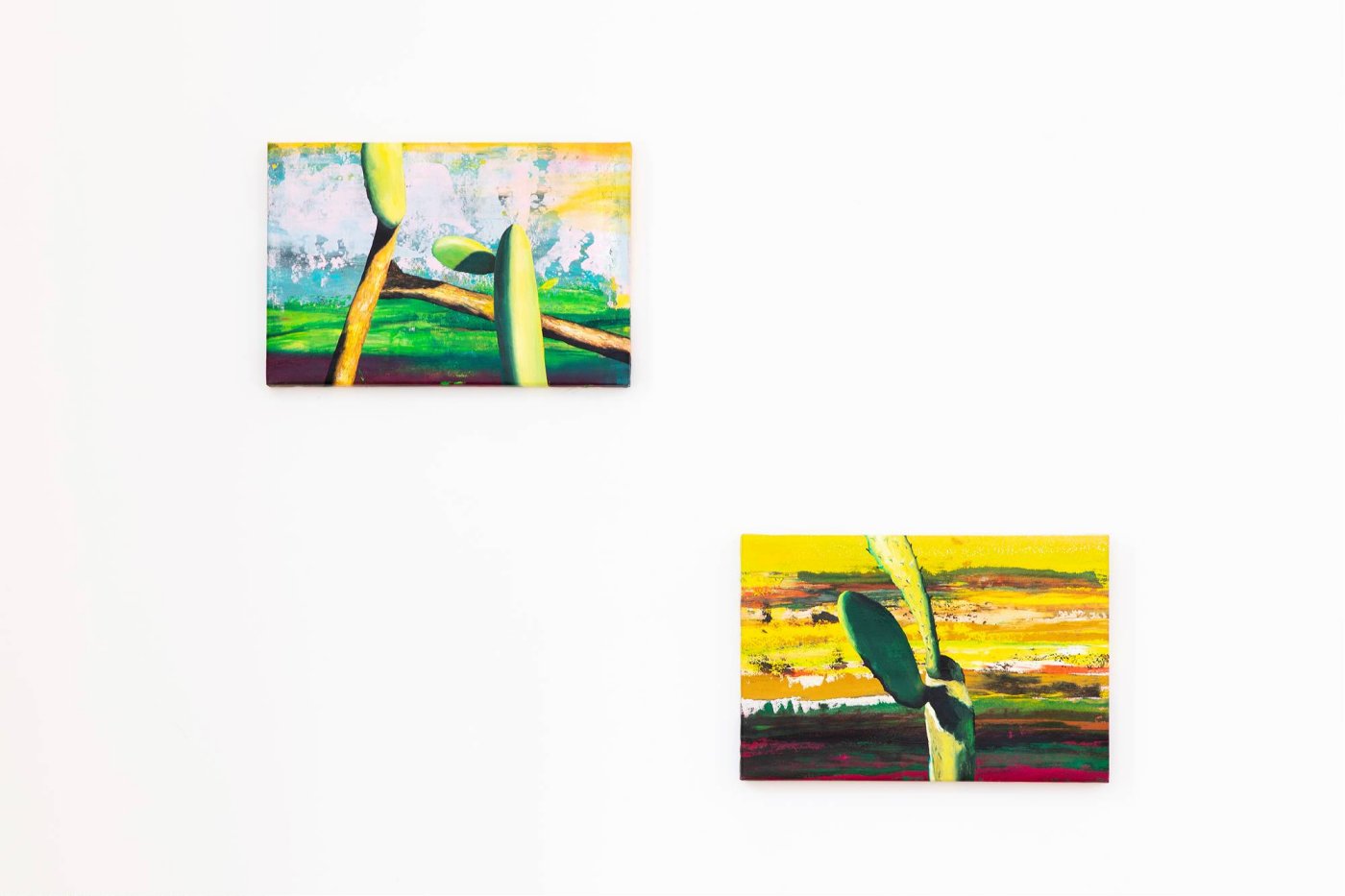 Born in the suburbs of Sibiu, confronted with the memories of an intense and then abandoned industrial era, Iulian Bisericaru has always felt an attachment to the environment, and explores so often in his numerous trips or residencies abroad. He is a declared admirer of Edward Hopper’s painting, for its solitary and melancholic atmosphere, or of the work of Hurvin Anderson, for his fantastical consideration of landscape before its real exploration. He also has a deep appreciation for David Salle, from a visual point of view, over the complexity of his compositions, of Robert Motherwell or Peter Doig, in an expanded view of painting with multiple perspectives, especially in the case of the latter. The fascination that Bisericaru has for depicting such a luxuriant nature is also connected with his childhood hikes, with a deep appreciation for an ineffable element that remains wild and unaltered, beyond feeling strongly about ecology. The ghosts of the former excessive industrial exploitations or cataclysms such as the one in Chernobyl are accompanied in his works by an environmental crisis that will be generated by the water deficit or by the climate changes that we are living through now. Iulian Bisericaru claims that we are sabotaging our world, yet in his studio – as we can suspect, with no less pleasure – he creates a lively and dynamic approach, in a free rapport with colours. He works with the rhythm and movement of his paintings. He creates various layers, firmly converging from the figurative to the abstract. The painter scrutinizes the details, using his eyesight as the zooming lens of a scientific device, and stops over the details of the cacti, well-known for surviving through drought. He makes them portraits of victors, contrasting between pink hues that symbolize pollution, the artificial, anxiety-connected, with an infinite array of green nuances. The ochre, brown, or grey hues connect the two worlds.

Especially in his most recent works, Iulian Bisericaru likes to draw us in the influence of Neo Rauch over his work, evoking industrial alienation and on a more general level, the resulting social issues. These topics allowed the two artists to build a subtle critique of the past, since the present always sends us back to other times. The social critique is underlined by the Romanian artist through disparate elements that are connected in his painterly collages, without a hierarchy of any kind or central perspective. By bringing together all of these points of view, Iulian Bisericaru draws information without imposing a precise narrative. In some of his paintings, we catch a remanent and inviting taste of an absolutely free nature, that could just as well be a fantasist vision pertaining to the XIXth century orientalists, some of which had never left Europe, or even to Douanier Rousseau, who almost always worked from his studio. At the same time, the vegetation that is usually associated with abandoned factories, on former worker sites now become ruins, transform the status of the paintings towards nihilism and absence, or even a voluptuous apathy…

Without any imposed script, the works from the show are accompanied by a sound piece created by French producer and composer Romain Poirier. In the framework of the Niamor project he composed, We Are the Rest of Mankind… The musician usually works with filmmakers and it is now for the first time that he establishes a rapport between his work and painting, thus creating a minimalist and intense sound-piece, that continuously evolves towards the psychedelic. The audience is guided in a new journey, losing oneself in the sound. In his 60 minute piece, he added passages from the discourse held by Jiddu Krishnamurti in 1984 at the United Nations, titled „Peace In Our Time”, translated and interpreted in Romanian by Diana Vidrașcu. ” Confronting painting and sound, We Are the Rest of Mankind is a cathartic journey through darkness and faith.”, the artist states. Once more, the past and the present react to one another in this alliance between the acoustic piano, field recordings and analogue synthesis. Just as in Iulian Bisericaru’s paintings, our reality is not completely explored, it still needs to give other voices the possibility to manifest or to reflect on the words of Radu Vancu from Canto I: ”There will be people and they will push the world further.”

Iulian Bisericaru (b. 1987) lives and works in Sibiu and Cluj-Napoca, Romania. He graduated from the Painting Department of the University of Arts and Design Cluj-Napoca (RO) and developed his PhD thesis on the relationship between architecture and painting, with a critical overview of the ecological ideology. Iulian Bisericaru’s artworks offer a somehow neglected or hidden perspective on aspects of contemporary society, that the human eye willingly avoids.

Ironic and playful at the same time, Iulian Bisericaru invites the beholder to take a position on environmental issues, be it by depicting the remains of industrial society or by approaching the controversial topic of city planning and resource exploitation. The artist was awarded a grant for an ongoing virtual artistic residency organized by the European Alliance of Art Academies through Akademie der Künste, Berlin in 2022. During February – May 2019 Iulian Bisericaru attended the residency Cité Internationale des Arts, Paris and two years earlier he took part in the International Summer Residency in Aschersleben. In 2012 he was nominated for Start Point Prize and he also received the Expomaraton Award. In 2017 his work “Diebenkorn Background” (2016) was featured in the Italian journal La Lettura – Corriere dela Sera (July, 2017). His first artist book is published and launched in May 2022.

Sound producer and composer, Romain Poirier develops original compositions for documentary and fiction films. In 2014, he co-founded Mer-Noir Studios, allowing him to deepen his research and affirm a free and radical creative process in his way of thinking, composing and producing music. He accompanies artists, directors and musicians through the production of works and performances and develops projects such as the extreme noise band Uzhur or the radio collective Scalarstation.