Zabludowicz Collection presents an exhibition of paintings by Tal Regev. Primarily depicting the human figure, Regev creates luminous and ethereal spaces on the surface of her canvases. Bodies and objects oscillate in mysterious territories conjured from light washes of colour, often threatening to slip from a viewer’s grasp completely. 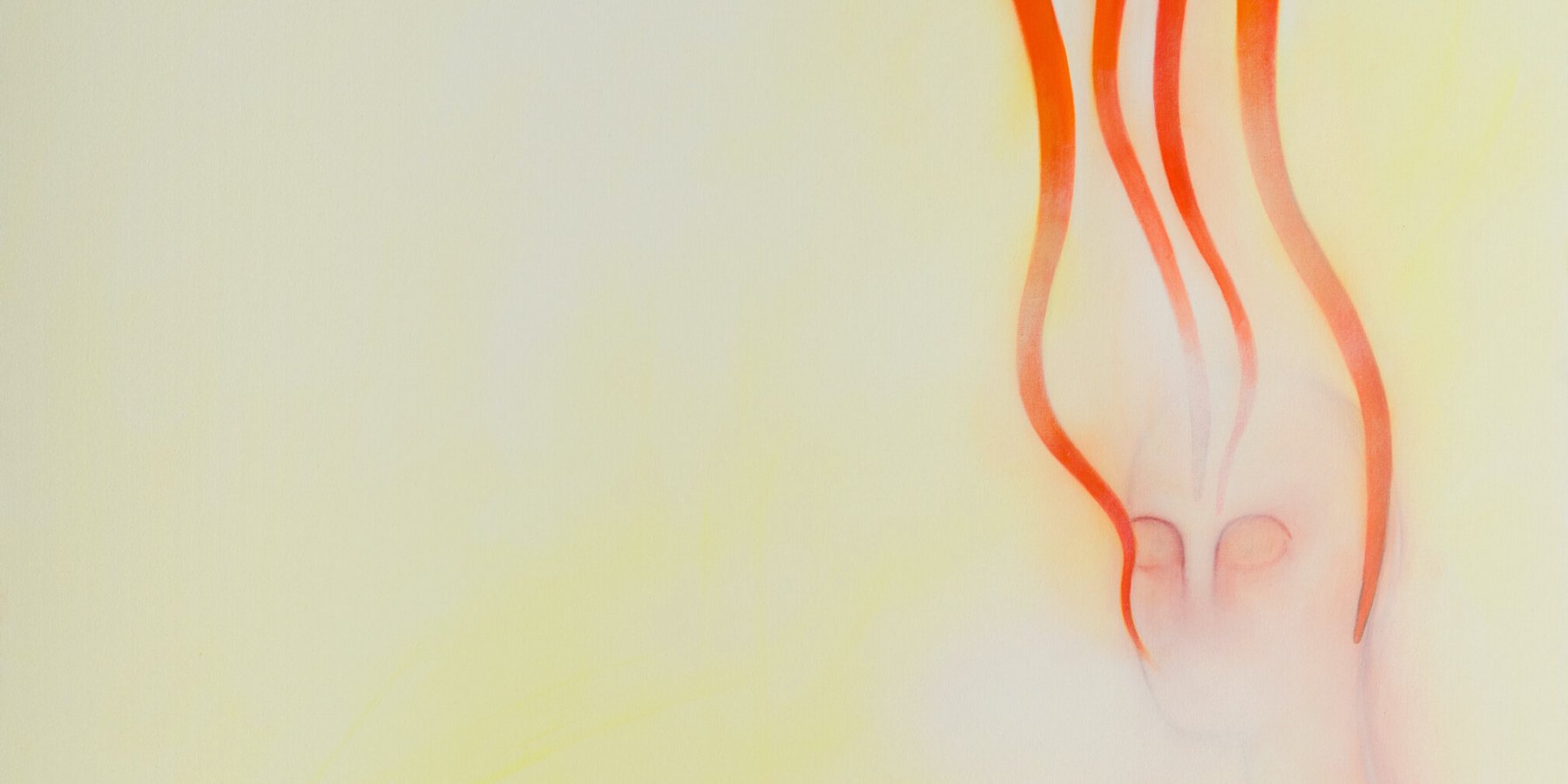 Conceptualising the body as a porous vessel through which forces flow, Regev engages in a highly personal meditation on her experiences, while also alluding to more universal questions of political histories, borders and health. Regev looks to the invisible things we carry within us; how memories and feelings become embodied rather than stored solely in one’s mind. This ‘psychic map’, as she describes it, unavoidably incorporates troubling darkness alongside lightness and joy. Residing in the subtle delicacy of the paintings is an acute sharpness.

In the spring and summer of 2020, while working in her studio in London during lockdown, Regev continued her investigation into notions of transmission and interaction between bodies. The impact of a new virus, highlighting the imbalances within our social and economic structures, casts Regev’s pursuit of invisible forces in an even more urgent light. The painting Flames in May (2020) features a seated figure with a glowing chest, seemingly serene aside from the violent heat that rises up from their head and off the canvas.

Predating the current pandemic is a large canvas titled Viscera (2017). From the abdomen of a leaning, toppling figure projects a large red orb which drips onto the lighter ground below. Alongside such raw and unsettling motifs Regev’s practice also gestures towards healing. The series Rapid Shifts (2018­–ongoing) depicts talismanic snake-like forms alongside, or sometimes in place of, the human figure. Here Regev zooms into the molecular, with translucent coils imagined as pulling out information embedded within biological cells, and thus detoxifying the blood.

At the heart of Regev’s practice is an exploration of tension; that which we feel within our own bodies, and that which exists between ourselves and others. It also foregrounds the tension present within ambitious picture making. Materials and composition are fearlessly pushed and stretched in these paintings, resulting in a reviving energy that offers pleasure to uncertain eyes.

Tal Regev (b. London 1985) lives and works in London. She completed an MA in Painting from the Royal College of Art, London in 2017 and prior to this she studied BA (Hons) Fine Art at Goldsmiths, University of London. In 2019 Regev was awarded the Derek Hill Foundation Scholarship, British School at Rome. She has exhibited internationally, with a solo presentation at Alice Folker Gallery, Copenhagen (2019) and numerous group exhibitions. These include: December Mostra, British School At Rome, Italy (2019); Futures of Love, Magasins généraux, Paris-Pantin, France (2019); All in green went my love riding, Calle Zucchero, Venice, Italy (2019); All our Friends, Unit601f, New York, USA (2018); Artagon III, Petites Serres, Paris, Fance (2017); Birth Rites Bi-annual award, Media City, Salford, UK.

Tal Regev, Flames in May, 2020 (detail), courtesy the artist