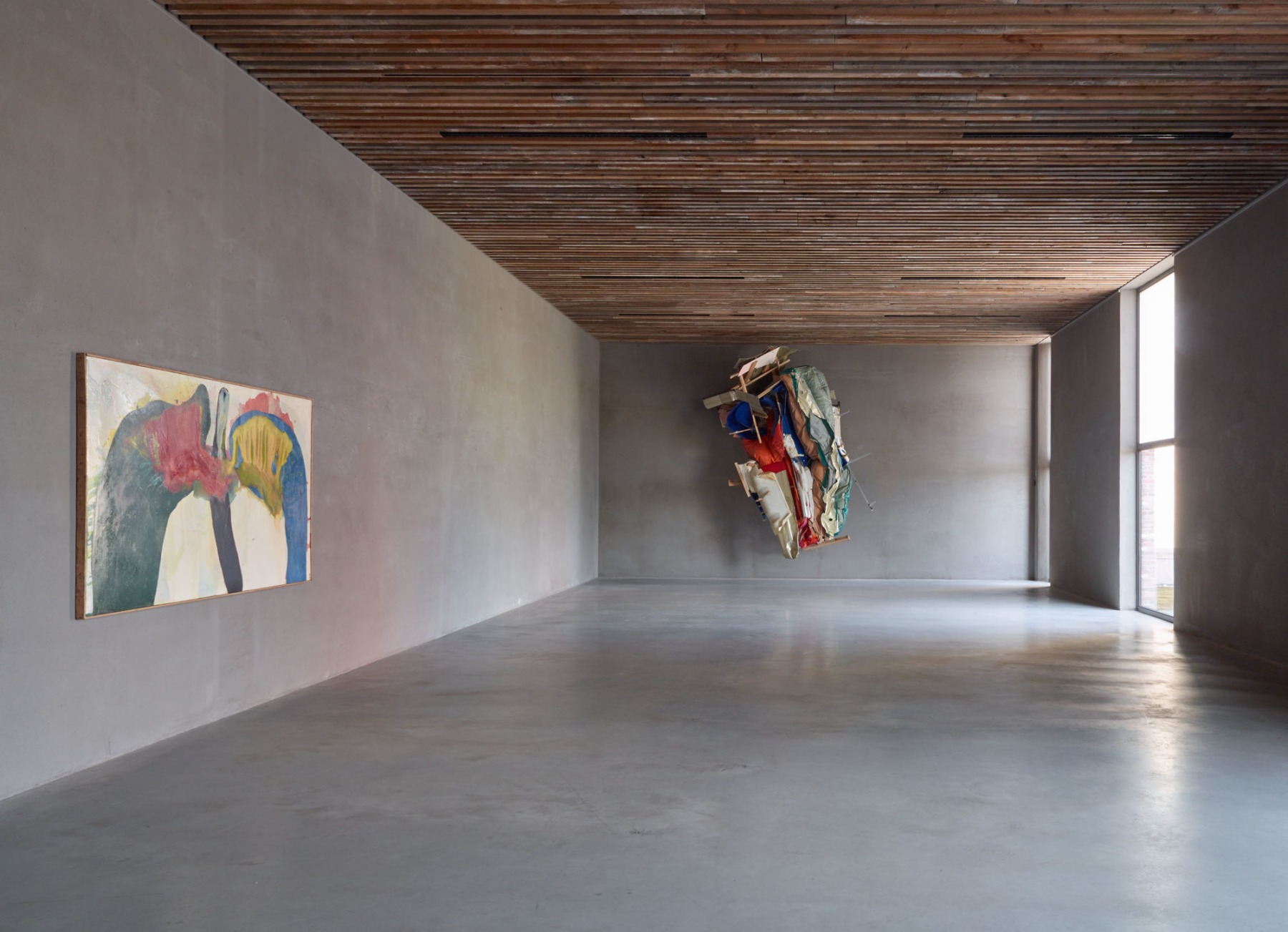 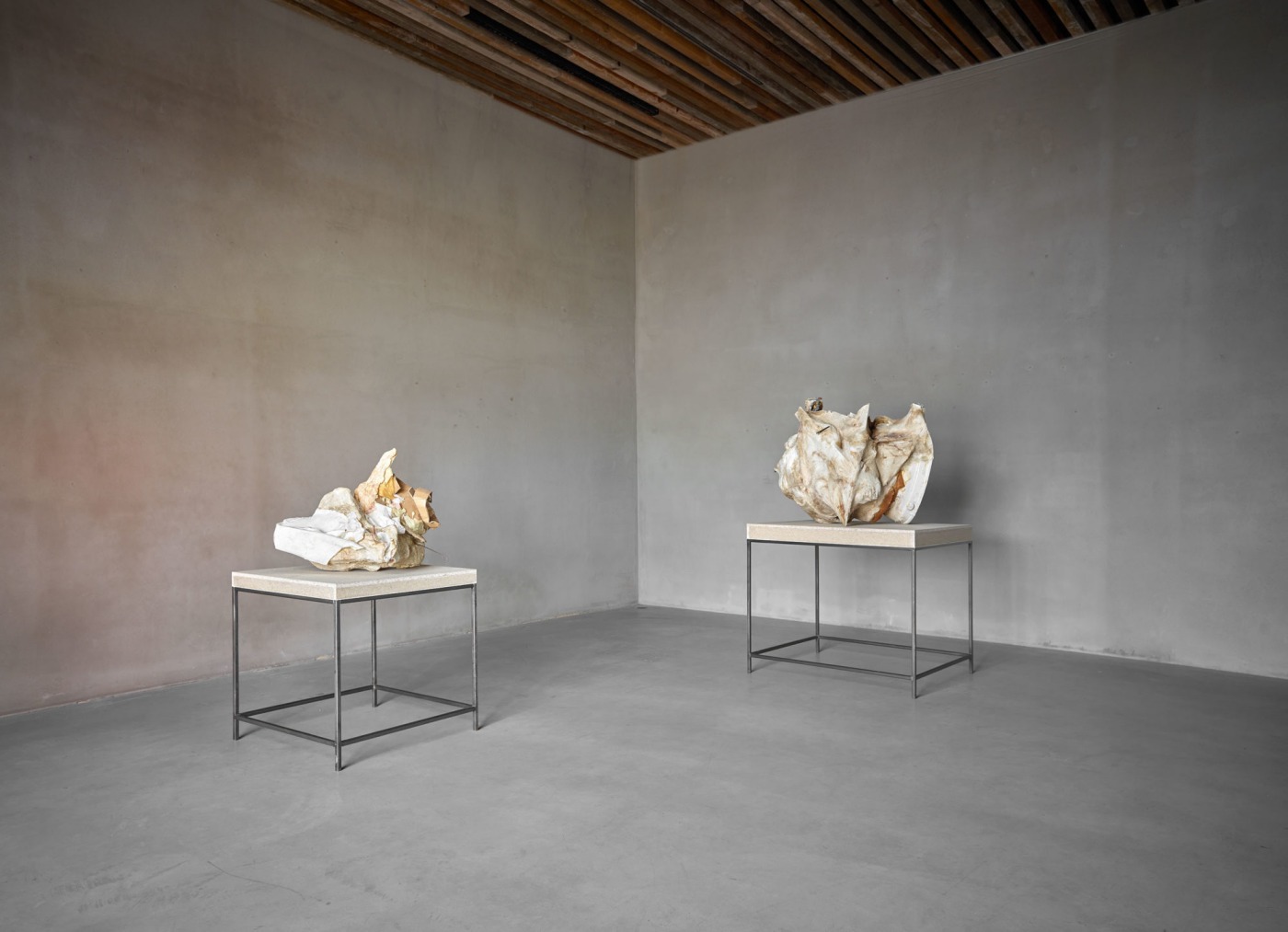 With his “On Hold” series, Peter Buggenhout makes sculptures that seem to be in an uncomfortable state between stability and decay, between the notion of “under construction” and that of a completed balance. The spectator is expected to move around a work to get a complete idea of it, and then to reconstruct the various impressions into a whole, but with confusion and blurred recognition as the result. “On Hold”, therefore, refers to both the construction of the installation, the inflatable elements under tension that are part of the work, and the perception of the viewer – the uncontrollable goals that man sets for himself but fails to achieve.

“On Hold #4”, presented on the Terrace Gallery’s wall, is constructed with a seemingly contradictory meticulousness. Certain facets allude to the time-honoured subject of the vanitas scene: transience and decay. Buggenhout enhances these sensory impressions by using different materials, shapes, colours, and surfaces. In the catalogue of the exhibition “No Shade in Paradise” at the Neues Museum, Nurnberg, 2017, where this work was shown, Eva Kraus described its form as “defined by the limits of their surroundings and structure and form are thus mutually dependent upon another”.

After the Second World War, investigations of materiality, form and medium were made in an avant-garde art world that tried to redefine itself. In Japan, one of the movements that did this was the Gutai Art Association, founded in 1954. Sadamasa Motonaga carried out this research in performances and installations, with natural and industrial elements. Most famous, however, were the installations where the central notion was liquid and ephemeral: paint, or water – such as his well-known installation “Work (Water)” (1956), which was re-enacted in 2013 at the Guggenheim Museum in New York. A series of vinyl sheets filled with dyed water seemed to be in a state of unstable balance, affected by the visitor’s moving gaze and by natural elements such as light and the gravity of their being.

Motonaga’s brazen and monumental “Work 145” (1964) demonstrates the artist’s independence from dogma through a spontaneous and commanding torrent of paint which spans the entire width of the canvas. Motonaga poured colour directly onto the canvas, then tipping the canvas to direct the flow of the paint. Motonaga emphasised the performative aspect of artistic production by utilising his own body and its physicality as a creative agent and unfiltered expressive tool. The ensuing patterns, which created from a balance between intention and chance, manipulation and intuition, stand testament to the artist’s deep respect for the primordial life forces present in all matter and beings.

Tsuyoshi Maekawa was following the same true Gutai spirit, where matter was the true vehicle of expression. Raw, gritty, tough, chosen from life, the weft and weave of burlap are his medium of choice. The work “Untitled” (1963) represents nothing other than itself. Maekawa places himself fully at the service of matter and the ego of the artist never prevails over it. The artist is at the behest of the medium. Gutai is about the concrete: that is its essence. A painting does not have to represent a landscape or still life: it does not have to represent anything at all. Instead, it presents itself in all its pure materiality. Paint is paint; found canvas is canvas… It is what it is.

A similar complexity of materiality and a rejection to resemble anything or to relate to anything at all is found in Buggenhout’s work. The historical work “Bergen zijn geen kegels” (Mountains are no cones, 1998) presents an amorphous volume created by organic materials hiding a secrecy yet exploring a monumentality. The indescribable mass is like an opaque and sealed-off form, devoid of identity and orientation, constituting the material of the unthinkable and the promise of all possibilities, including those of the void and absence.

The two sculptures in the small space of the Terrace Gallery, which are part of the “Mont Ventoux” series, refer to the same idea and can only be viewed from a distance, although this does not provide any new insights. The titles are analogies, just like the work itself ­– after all, the world cannot be understood, and any representation of it would fail to grasp reality. Buggenhout seems to be placing himself in the tradition of renouncing representation, which was also a central pillar in the post-war avant-garde movements, although he wants to go further – into such a state of abstraction that it is no longer abstraction.

“When we look at an image, we instinctively aim to recognise something in it. My sculptures do not escape this entirely natural impulse on the part of the beholder. However, my works are built up in such a way that each impression one has of what one sculpture could refer to is dismantled as one walks around the world. Once you have finished walking around one of my sculptures, you cannot but conclude that it resembles nothing other than itself.”