The exhibition takes its starting point from a recent project initiated by Capitain Petzel during the Corona lockdown called Rhizome. Among the works presented online and later at the gallery was one of Sarah Morris’ films, Finite and Infinite Games. The work posits two opposing worldviews of politics, thinking, strategy and even creativity. This sparked the idea for the subsequent group show Infinite Games. The exhibition encompasses 13 artists whose practices reflect the power that the deviant, ambiguous and disjointed can play both in art and society as a whole. 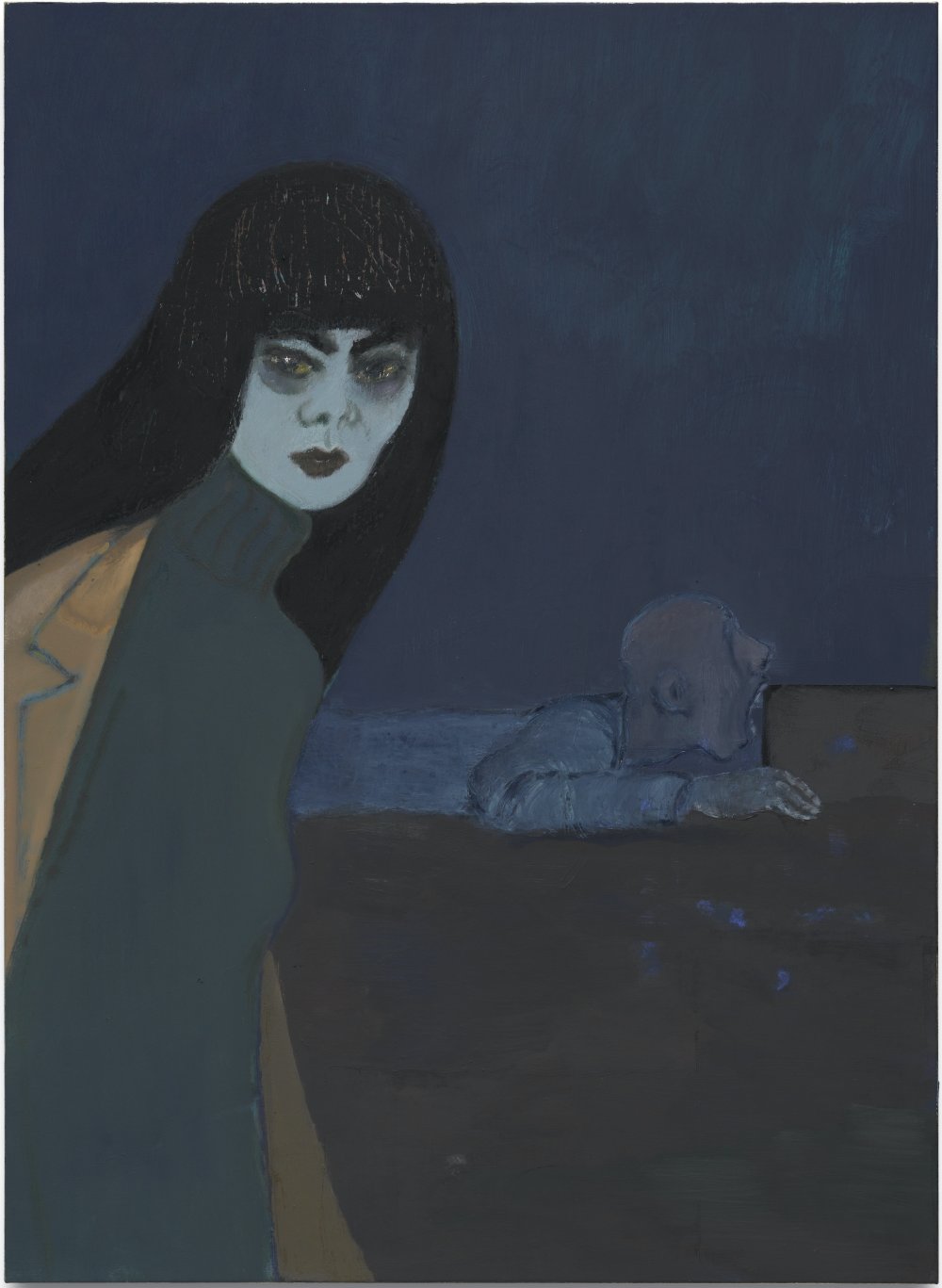 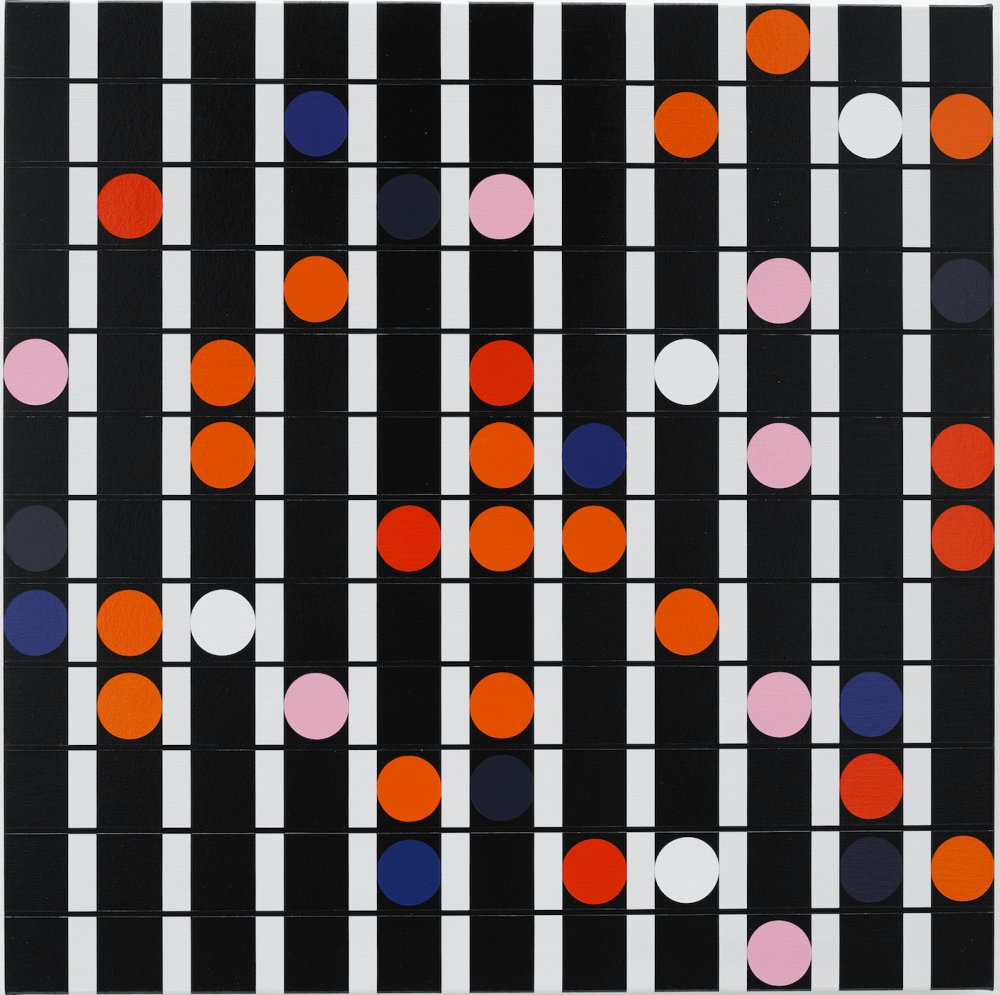 Sarah Morris
Deviancy is the Essence of Culture [Sound Graph], 2018 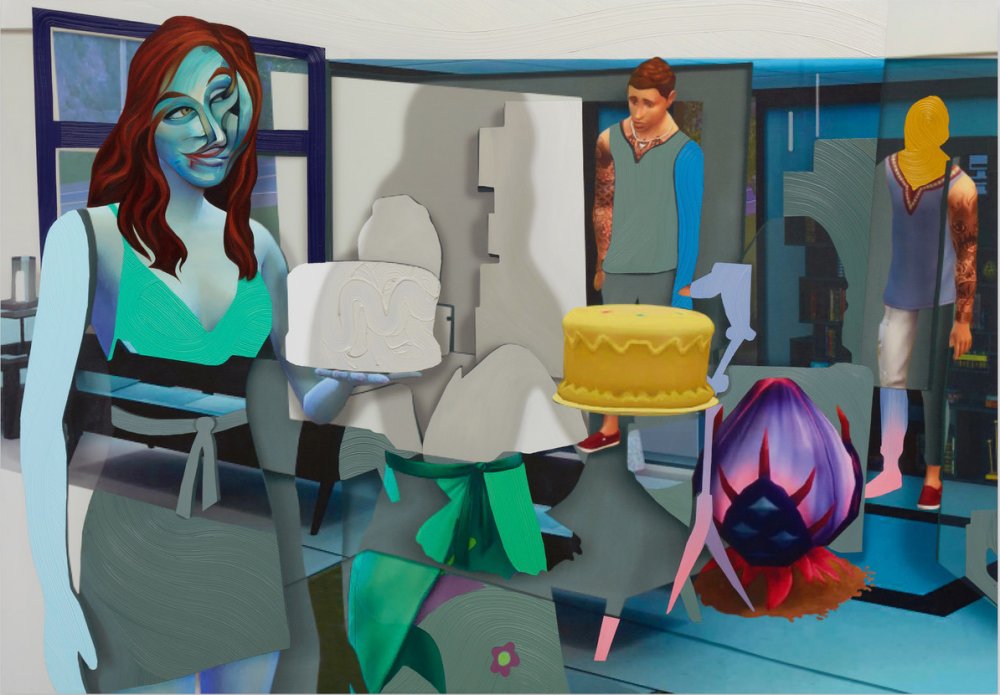 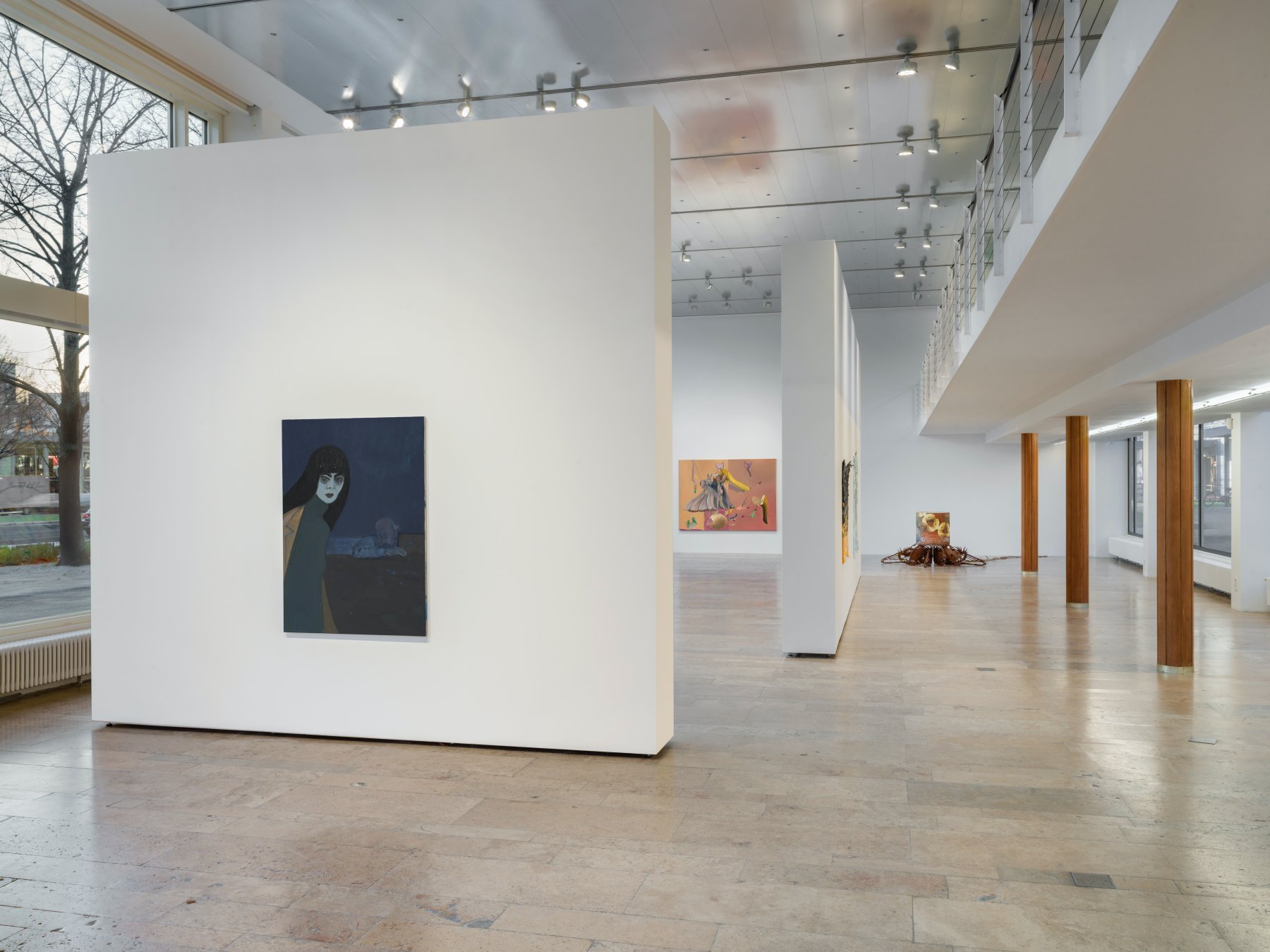 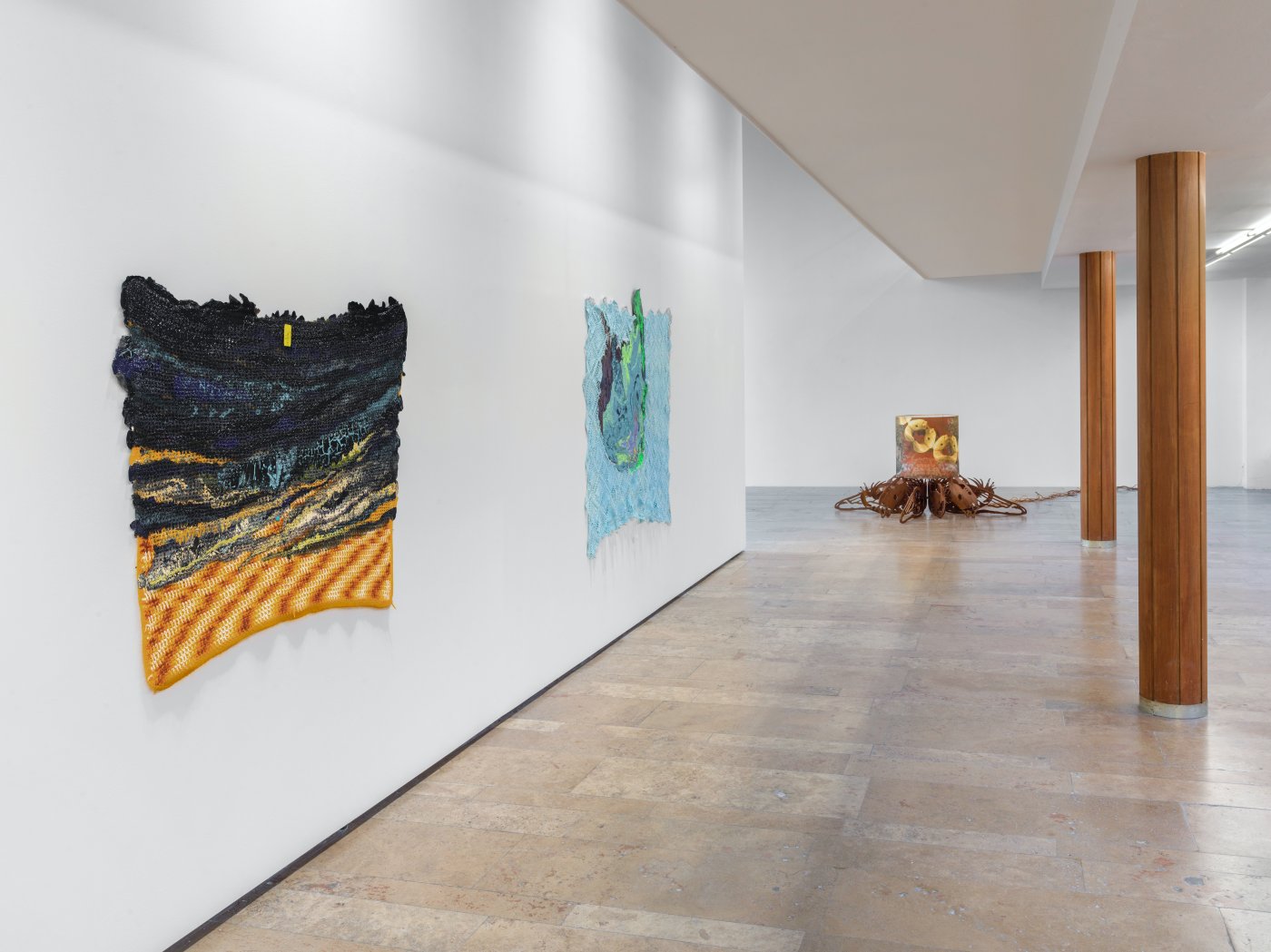 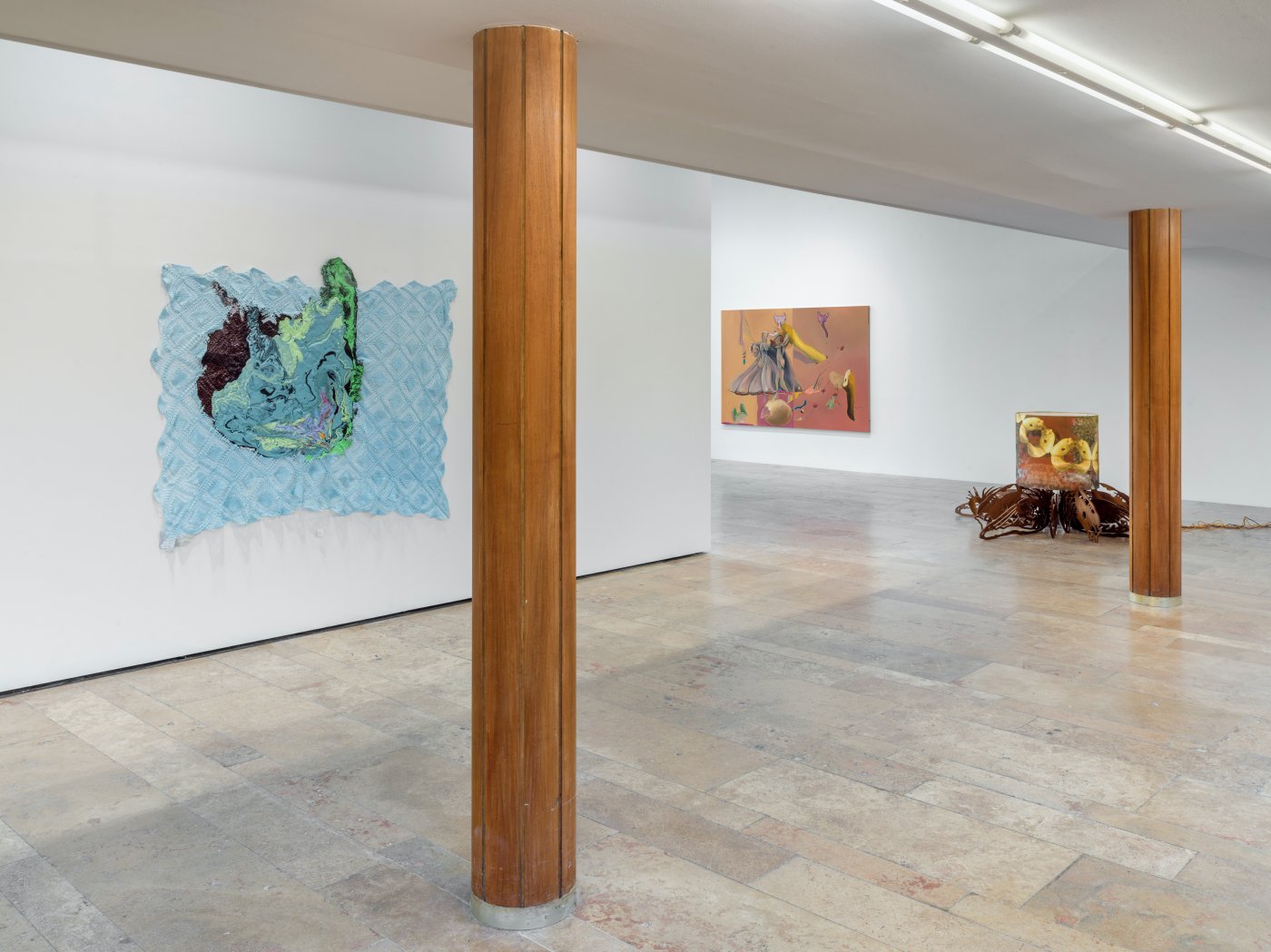 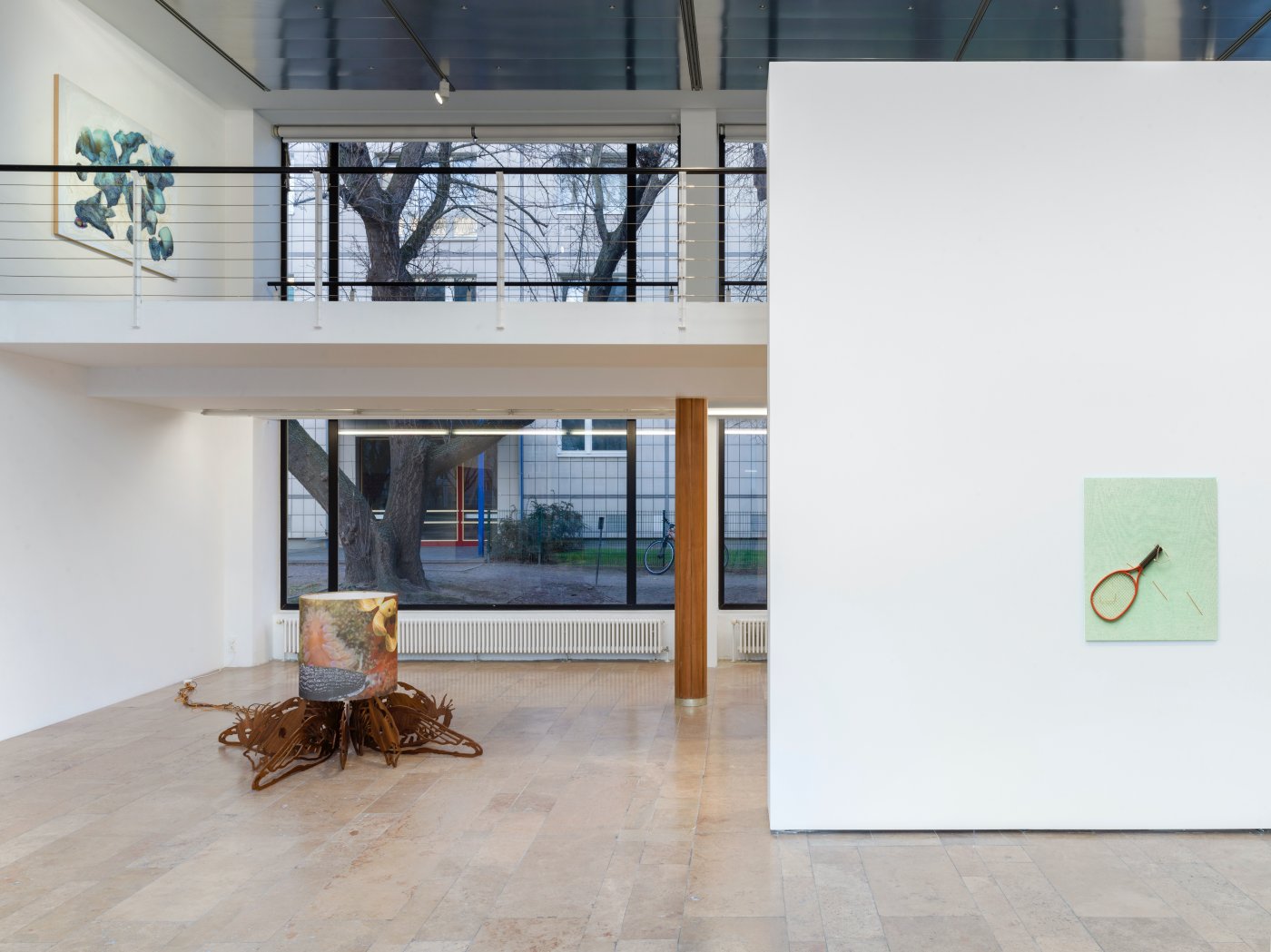 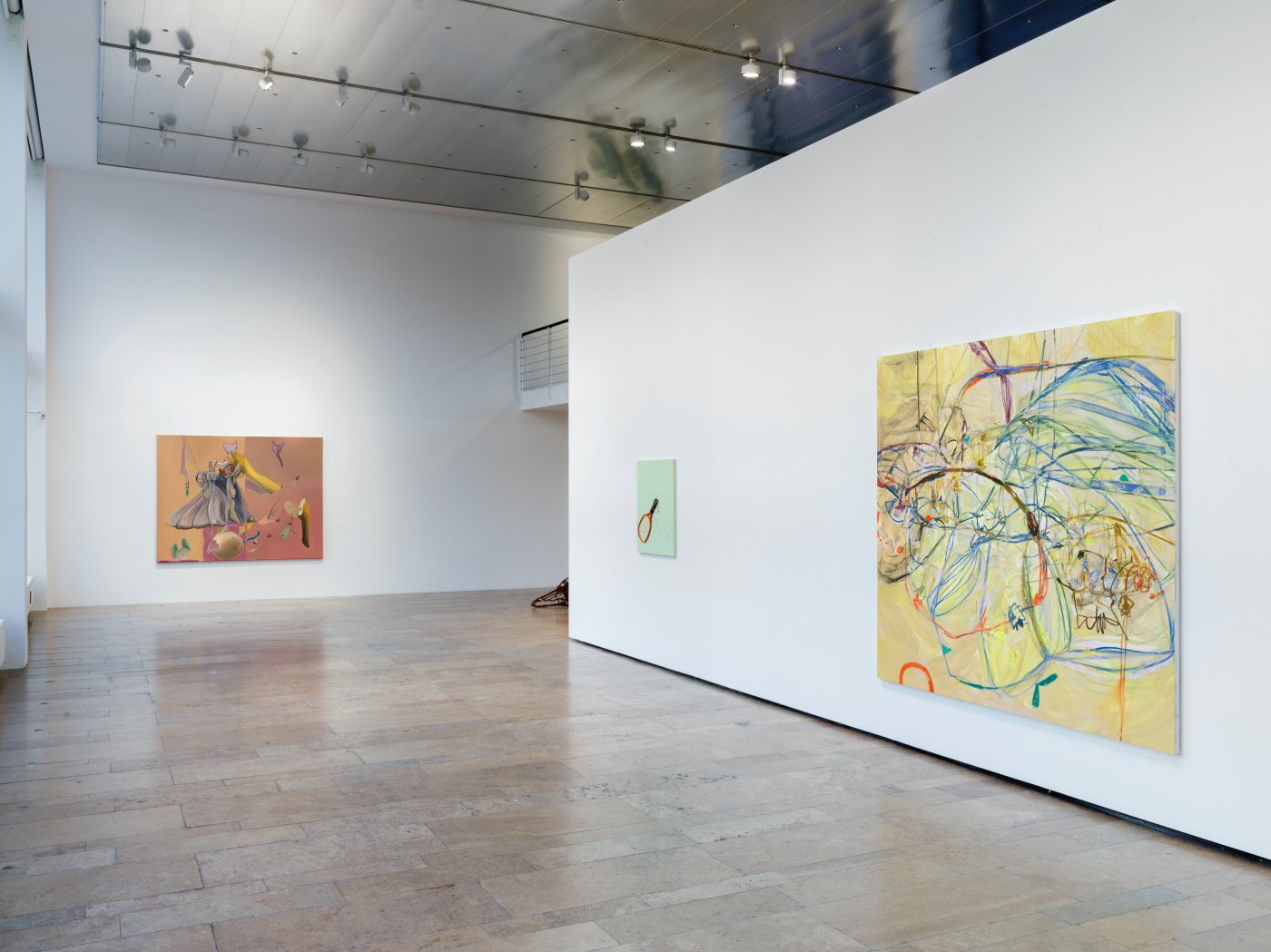 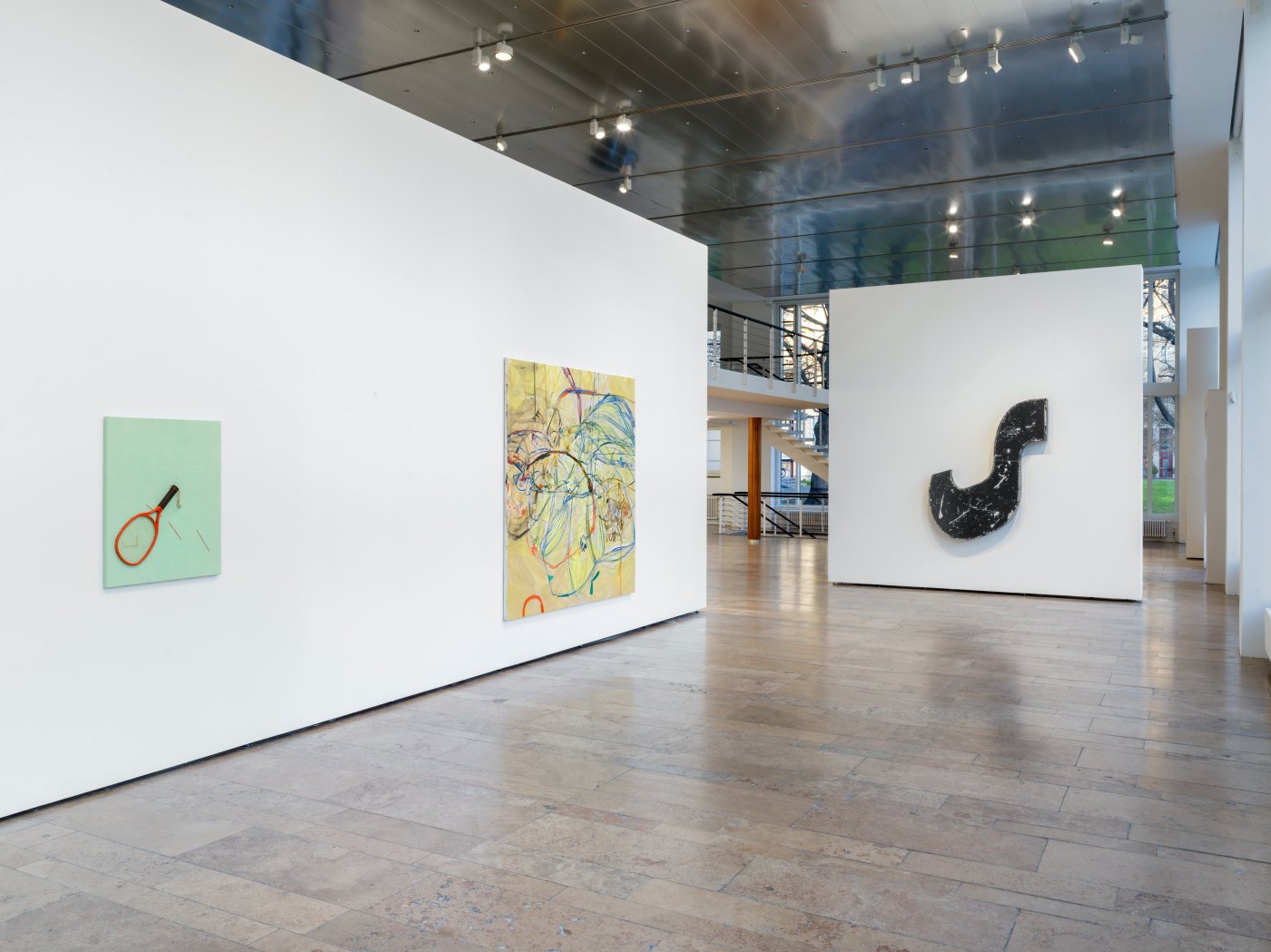 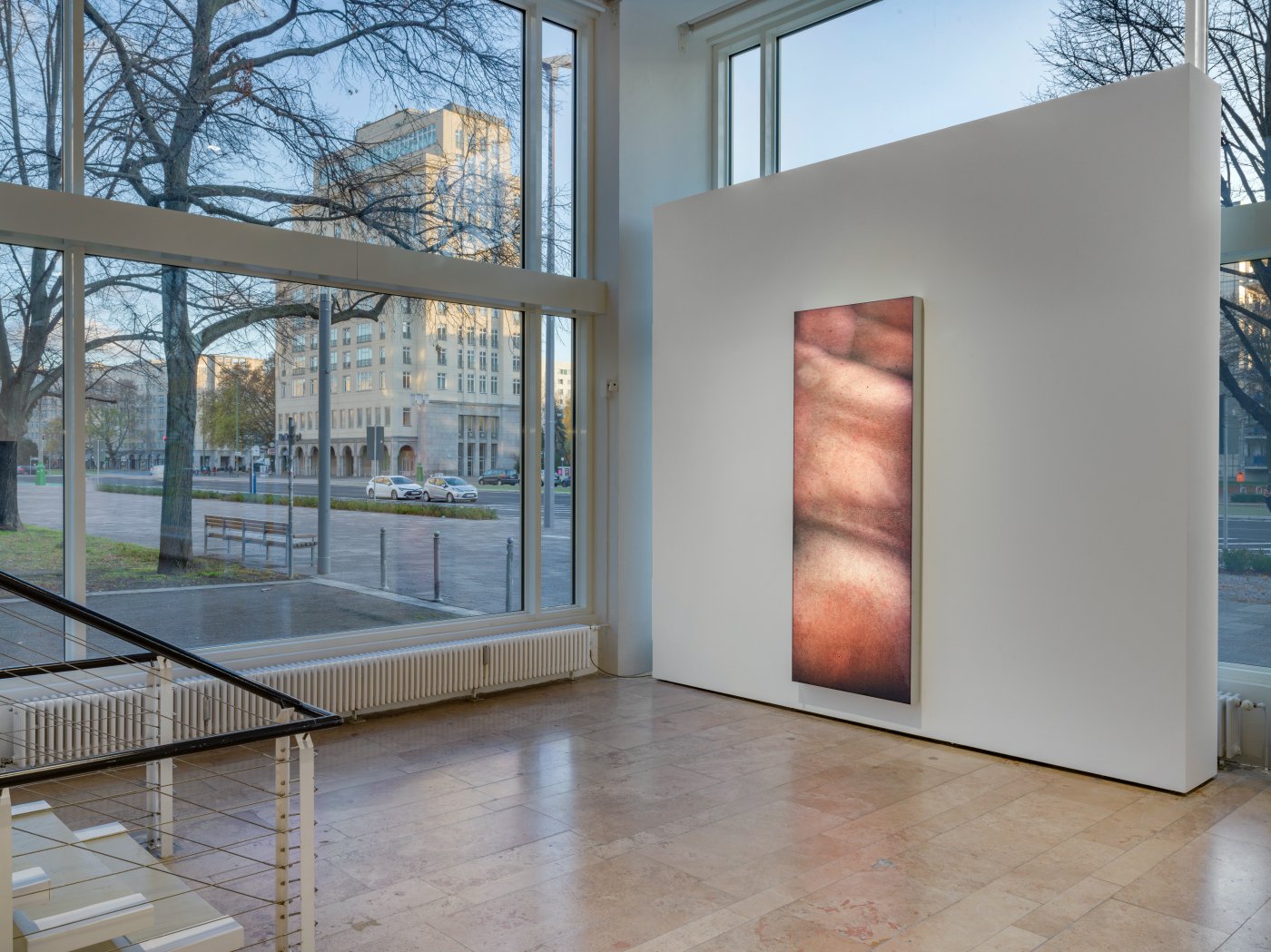 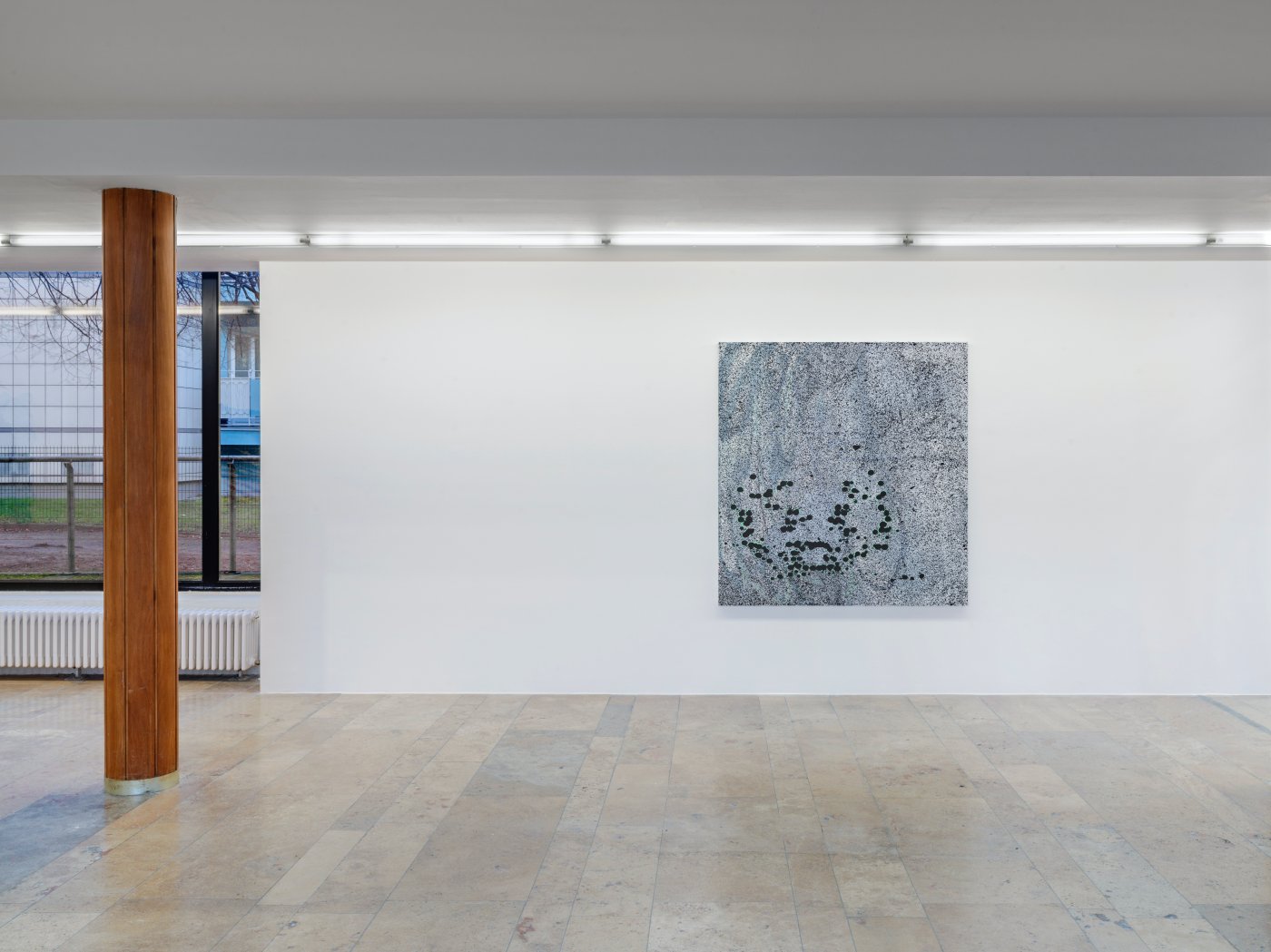 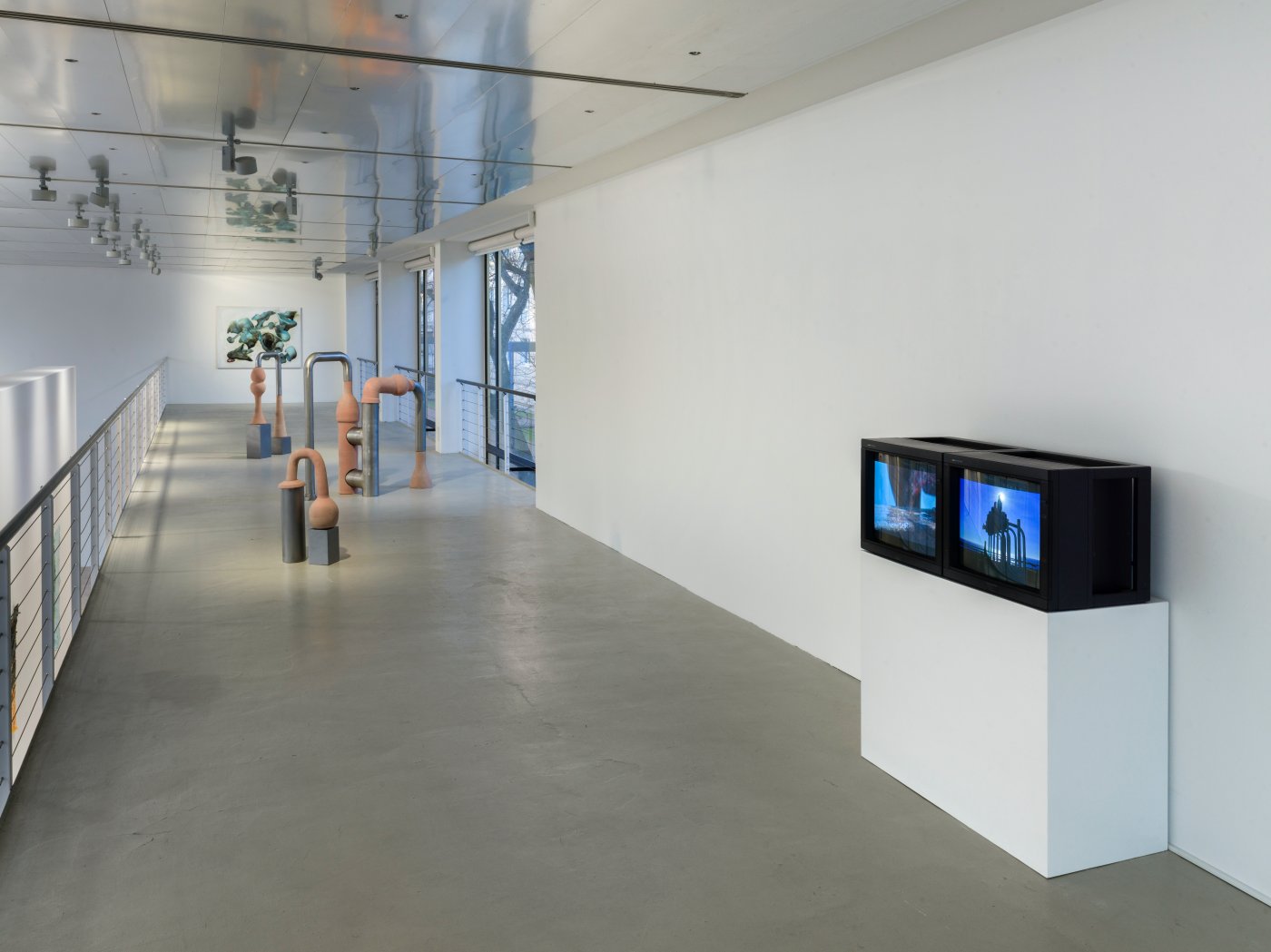 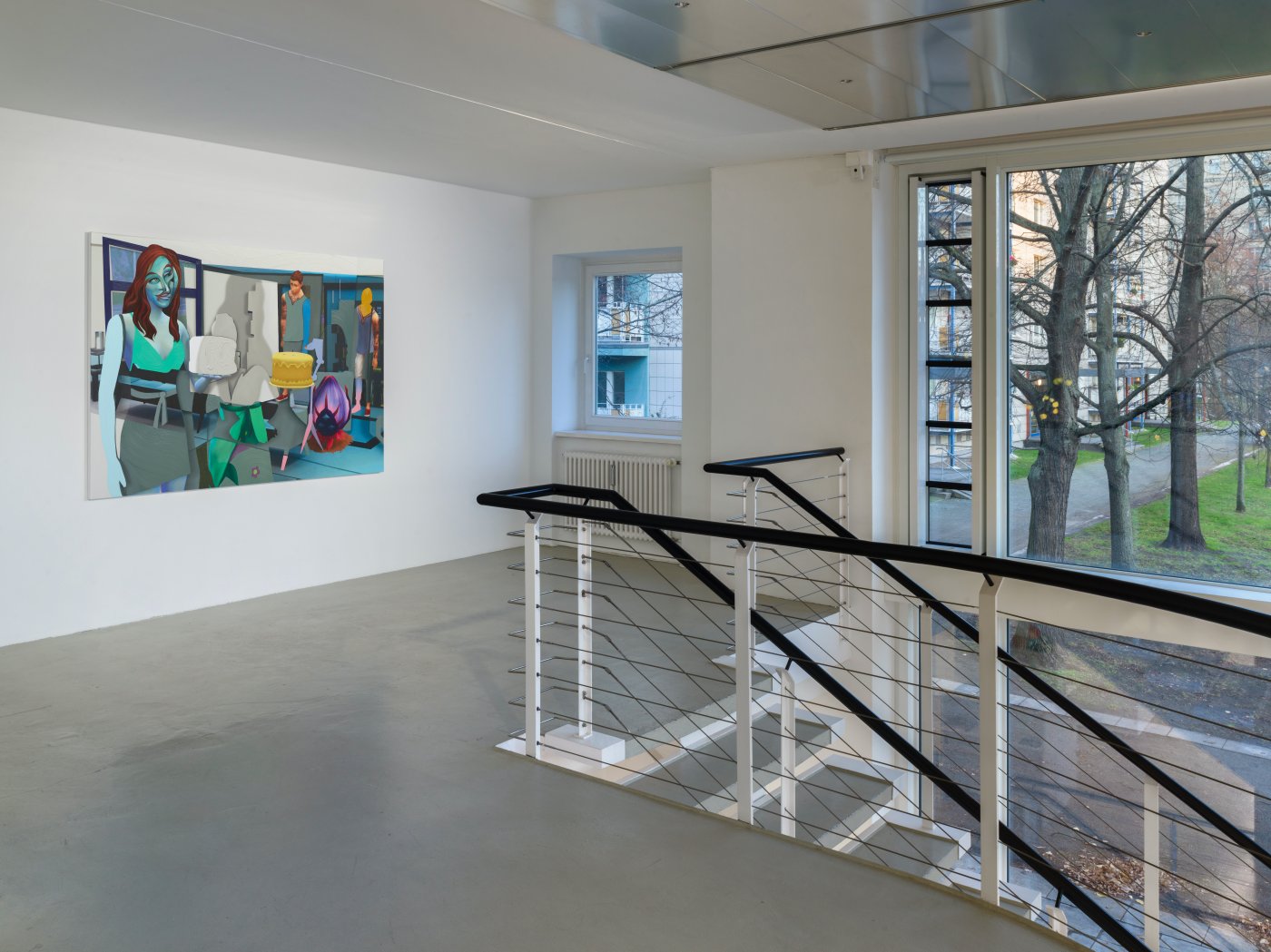 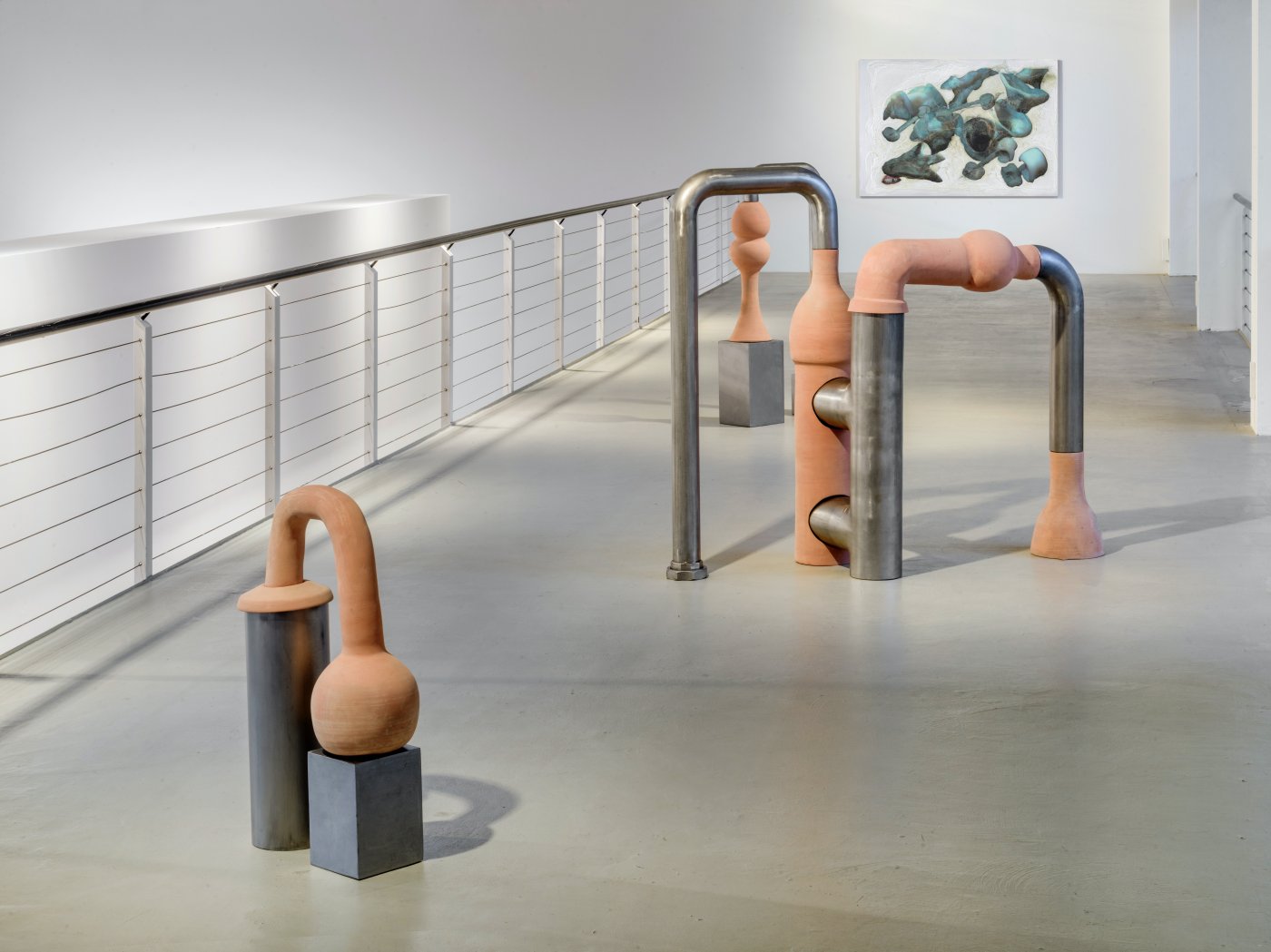 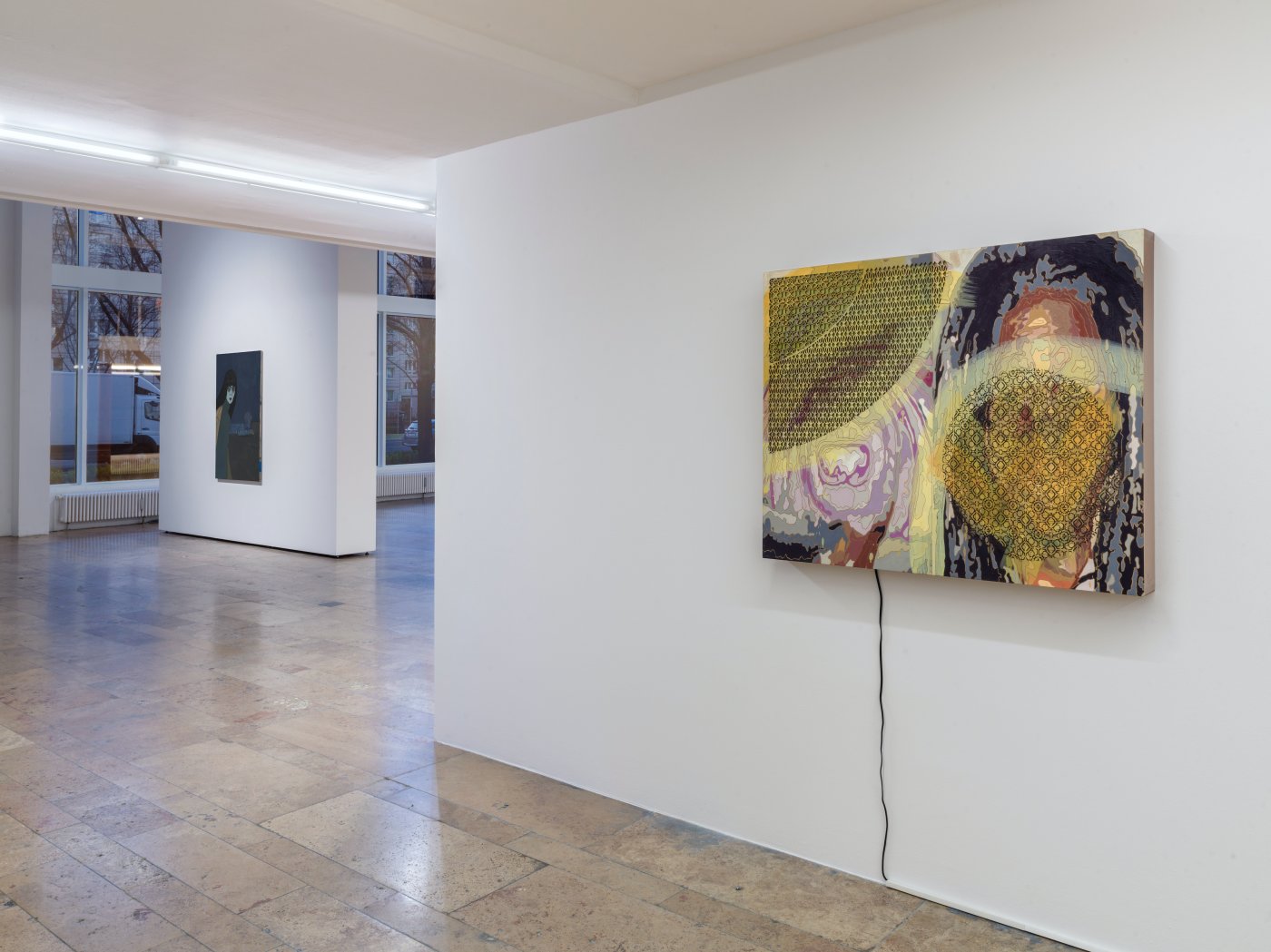 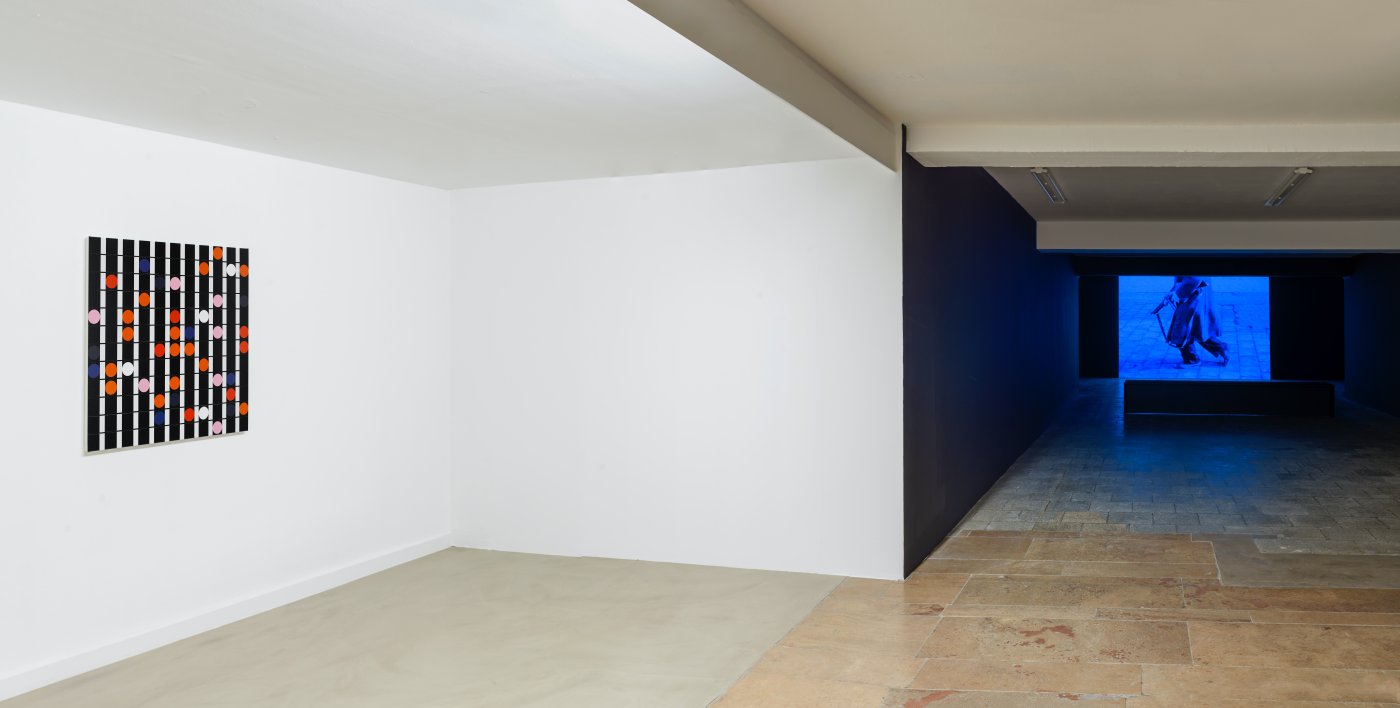 Jadé Fadojutimi’s (b. 1993 / lives and works in London) new painting To hover, to flutter, what will be, will be is a true testament to her unique painting practice in which her endlessly colorful, haphazard brush strokes replace language to become a visual reflection of their own fragility. Seemingly light and playful, the work conveys Fadojutimi’s subjective reactions to everyday experiences and the awareness of her own identity.

Ximena Garrido-Lecca (b. 1980 in Lima, Peru, lives and works in Lima and Mexico City) engages with the turbulent history of her native Peru through sculpture and film, examining how neocolonial standards are continuously enforced by globalization. Her project Destilaciones (Distillations) began as an investigation into the Peruvian town of Lobitos, in which the petrol industry asserted immense power. The two-channel video Aceite de Piedra depicts the realities of the socio-economic life of Lobitos. Similarly, her sculptures, composed of stainless steel and ceramic, present a powerful juxtaposition of the ever-present oil purifier machines and local artisanal practices.

Stefanie Heinze’s (b. 1987 / lives and works in Berlin) new work As You Treat Me (Specious Prosperities) features her archetypal surreal figurations in which obscured forms become recognizable as unexpected subjects, drawing us into her intimate visual worlds. From disembodied body parts, to everyday objects, to animal-like figures, Heinze’s subjects melt into colorful, fantastical forms to create vivid compositions which, in combination with their lyrical titles, are both deeply personal as well as cleverly subversive in their questioning of the status quo.

Jacqueline Humphries (b. 1960 in New Orleans, lives and works in New York) contrasts traditional brushstrokes with stencil-mediated applications in her textural paintings. The artist makes use of ASCII, an image encoding system which dates back to the 1960s, to translate forms into stenciled grids through which she applies paint to the canvas, thus reflecting the increasing influence of technology in contemporary abstract painting. For one such form – the emoji as seen in the painting presented – Humphries uses a handheld, portable inkjet printer to create the image, which she then enlarges on a computer and cuts into a stencil, a process that produces a heavily degraded, almost unrecognizable emoji.

Sanya Kantarovsky’s (b. 1982 Moscow, lives and works in New York) new work is a tribute to Maki Asakawa, a Japanese jazz and blues singer from the 1970s. The work is named after her song Ura Mado (translating to Rear Window), which is a reading of a poem about lost love by Shūji Terayama. The image in the background shows a figure conflicted in an act of self-sabotage. The scene presents a stark juxtaposition; a dark and disturbing background behind the foregrounded magnetic figure of Maki Asakawa. As typical for his practice, Kantarovsky toes the line between seductive and unsettling – humorous but frightening.

Rodney McMillian (b. 1969 in Columbia, South Carolina, lives and works in Los Angeles) explores the complicated relationship between history and contemporary culture, not only as it is expressed in American politics, but also as it manifests in its modernist art traditions such as landscape painting. His paintings on knitted blankets, sometimes with clear representation of a landscape, reflect on the systems of exchange that domestic objects can exist in, and their relation to the histories they evoke, whether personal, national or art historical.

Sarah Morris’ (b. 1967 in Sevenoaks, UK, lives and works in New York and London) Sound Graph painting utilizes the language of American abstraction, minimalism and pop, while its forms are derived from the artist’s sound files, using the speech from audio recordings as a starting point for the composition. Deviancy is the Essence of Culture takes its title from James P. Carse’s cult novel Finite and Infinite Games, from which Morris had crafted a film script, which functions as both philosophical thesis and warning. By encoding sound in her signature visual language, Morris demonstrates the constructedness of language — a notion particularly relevant to our post-truth age.

Virginia Overton (b. 1971 in Nashville, lives and works in Brooklyn, New York) pulls viewers into heavy semiotic traffic by playing with elements of the literal and the reconfigured. Responding to her physical presence in the empirical world, her sculptures often consist of simple, non-artistic materials, which previously had practical value and use. The lacquered aluminum of Untitled (Ceci n’est pas une pipe) was manufactured by a US advertising company that designs logos and signs for large corporate buildings. The material for this sculpture was salvaged from one of these locations and later manipulated into a new sculptural form, playfully alluding to Magritte’ famous eponymous work.

Laura Owens (b. 1970 in Euclid, Ohio, lives and works in Los Angeles) combines a variety of art historical techniques and conventions to create a dense network of references that range from the avant-garde to pop culture. Untitled (2016), consisting of an old-fashioned tennis racket attached to a monochrome blue canvas, exemplifies the eclectic nature of Owens’ playful work. Her approach to painting is experimental, often melding digital composition and analogue personal touches that command attention, ensuring that there is always a form of interaction between the viewer and the painting.

Jorge Pardo’s (b. 1963 in Havana, Cuba, lives and works in Merida, Mexico) work functions at the junctures between sculpture and painting, design and architecture, craftsmanship and computerized production. The wall object in the exhibition is a hybrid between photography, sculpture and painting. Shapes from computer- manipulated images of the artist’s everyday environment overlap and are ornamentally perforated and milled on wooden panels that are painted, mounted on Plexiglas and illuminated from behind with LED lights. Similarly, Pardo’s free-standing Slug Lamp exemplifies the capacity of the artist to create works which hover between functional design and art while questioning these definitions.

Seth Price (b. 1973 in Sheikh Jarrah, Palestine, lives and works in New York) experiments with materiality through a range of media. His connection to the body recurs throughout his work, whether through media images, casts, or clothing. Price’s closeup photographs of skin mounted on lightboxes are made using a robotic camera typically deployed for scientific research or forensic study. This vast data set was then algorithmically stitched together by a mapping program similar to the one used by Google’s street view camera so as to explore the self as continually mediated by technology in the modern age. His Photo Paintings, a series that includes 90s Style Teeth, creates a similar contrast between the material and immaterial, as bodily elements are digitally configured and printed on canvas.

Pieter Schoolwerth (b. 1970 in St. Louis, MO, lives and works in New York) also takes the mediation of life through technology as a central theme of his work. His interest lies in how these “forces of abstraction” affect the interpersonal communication and atomized social relations of contemporary society. In his new series Shifted Sims, Schoolwerth makes use of the imagery of popular life-simulation computer game Sims to explore the reality of “once-removed” existence; a life split between material substance and virtual space. The composition is slightly shifted and distorted, deviating from a simple scene of avatars to one that depicts the increasingly relevant condition.

Wim Wenders (b. 1945 in Düsseldorf, lives and works in Berlin) contributes a digitally restored loop from his first 16mm short film dating from 1967 to the group show. The featured work Same Player Shoots Again was shot whilst Wenders was still a student at the University of Television and Film in Munich. The camera follows a figure played by the famed German actor Hanns Zischler, bearing a gun, stumbling along a war-torn street in a seemingly Sisyphean manner. The more the viewer watches the figure, the more his walk deviates and appears to be painful, conjuring familiar feelings of ominous vulnerability. Originally shot in black and white, the adaptation consists of a three-minute take repeated five times, “like the five balls in a pinball machine”, each time in a different color. “It did not really turn out a color film. Just a bit of blue, red, yellow and green along the
road.” (Wim Wenders)