“This ocean borne detritus, or flotsam, was laid out in the vestigial formations of the waves that washed them onto the shore as the tide receded. It said everything I wanted to say and I knew I could run with it. The question then became, run where?” – Ashley Bickerton

Lehmann Maupin presents In Focus: Ashley Bickerton, a special presentation by the Bali-based artist featuring a series of new paintings, collectively titled Flotsam Series. This is the artist’s first presentation with Lehmann Maupin in New York since 2013; his last exhibition in New York City was with the FLAG Art Foundation in 2017. 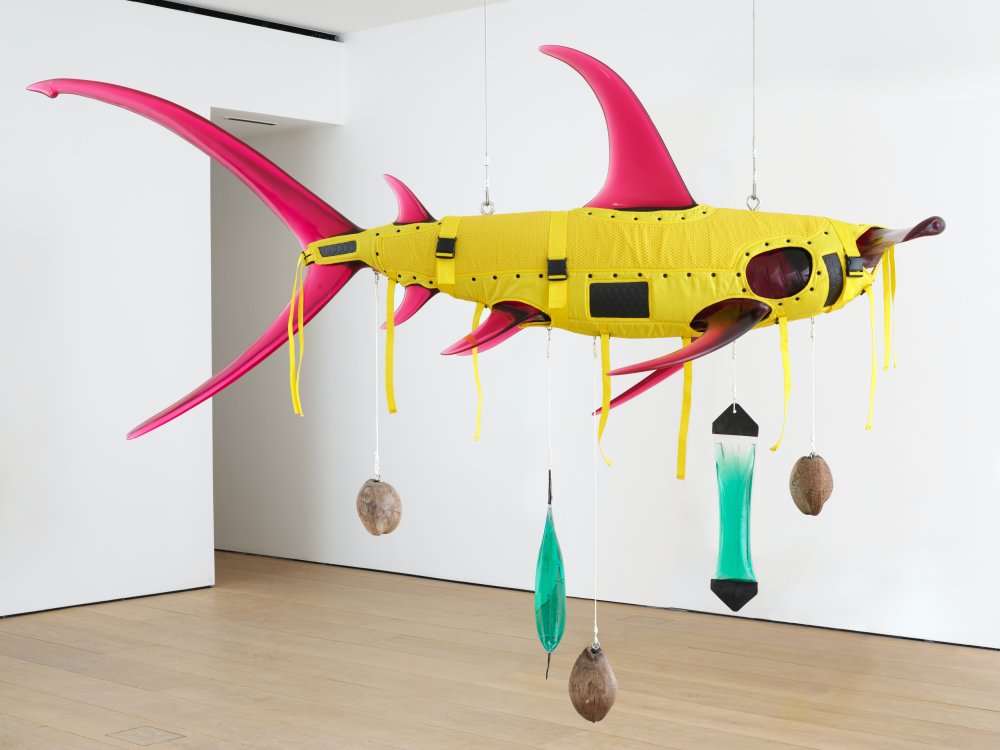 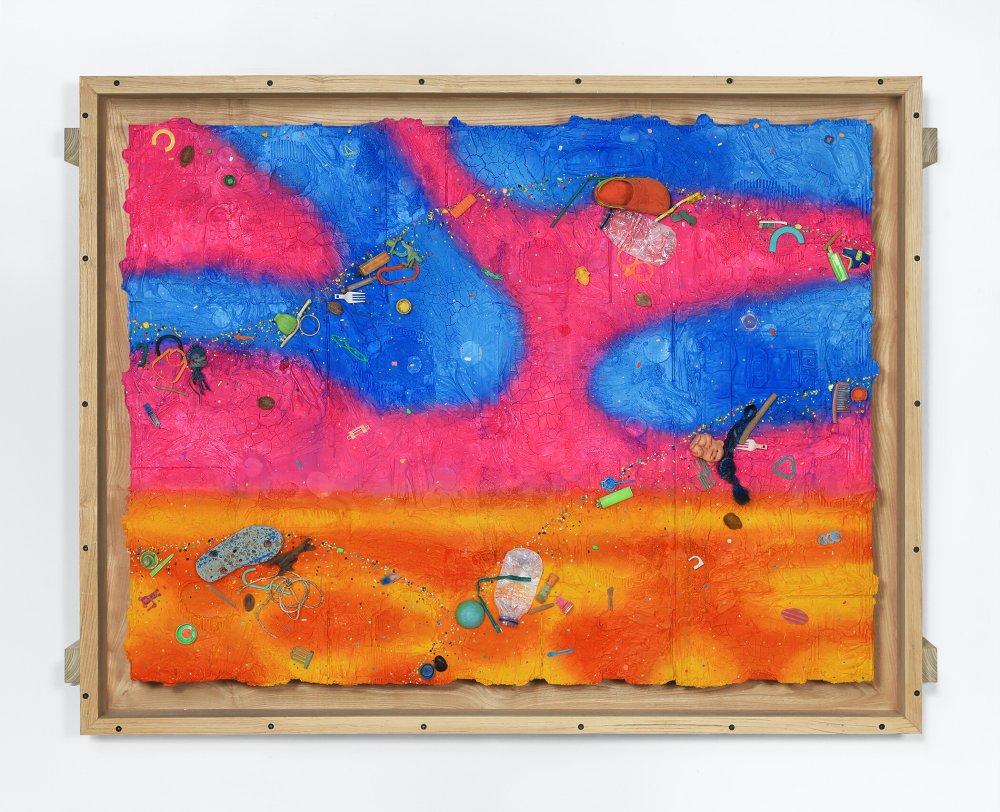 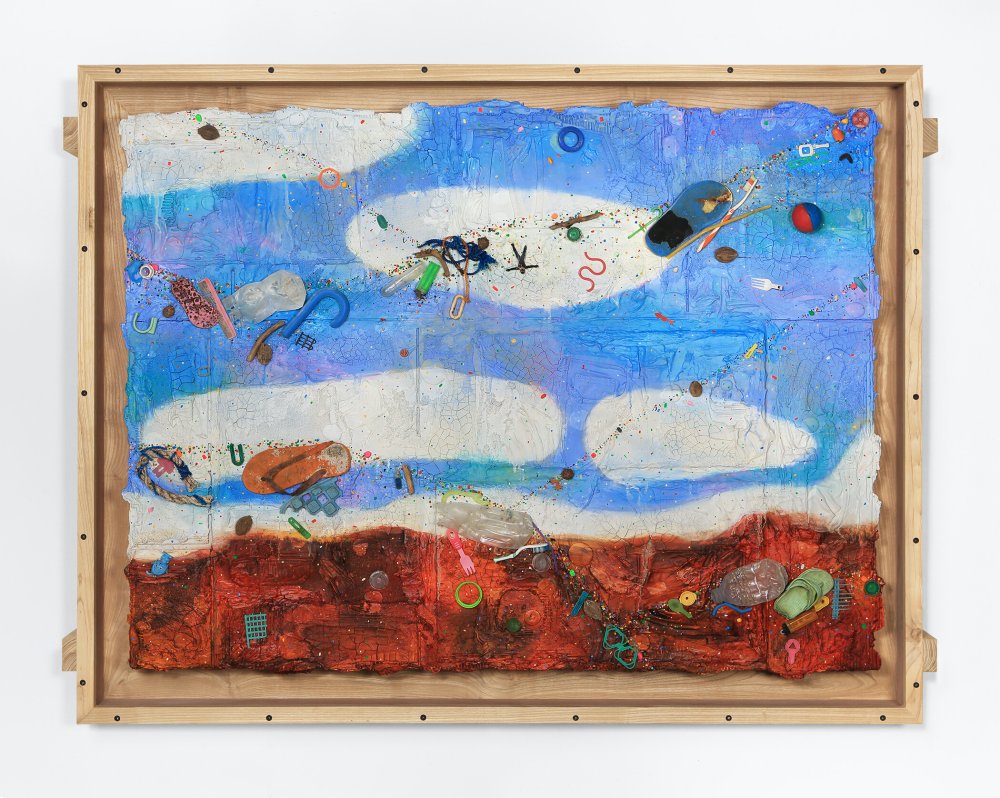 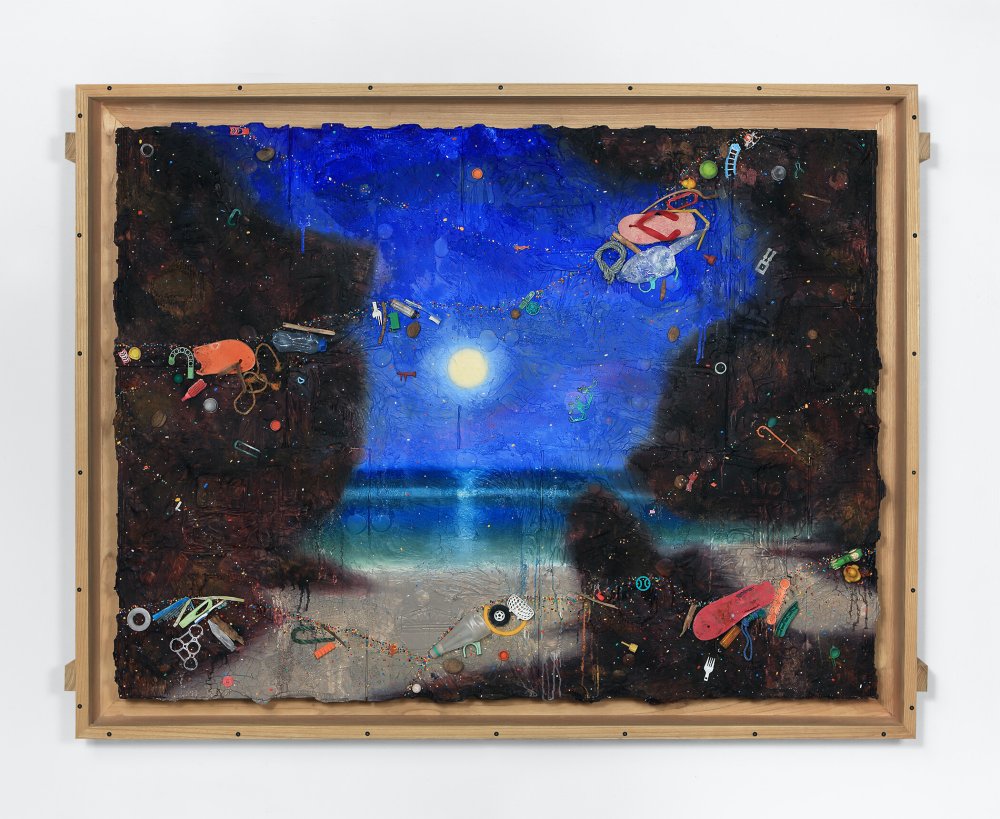 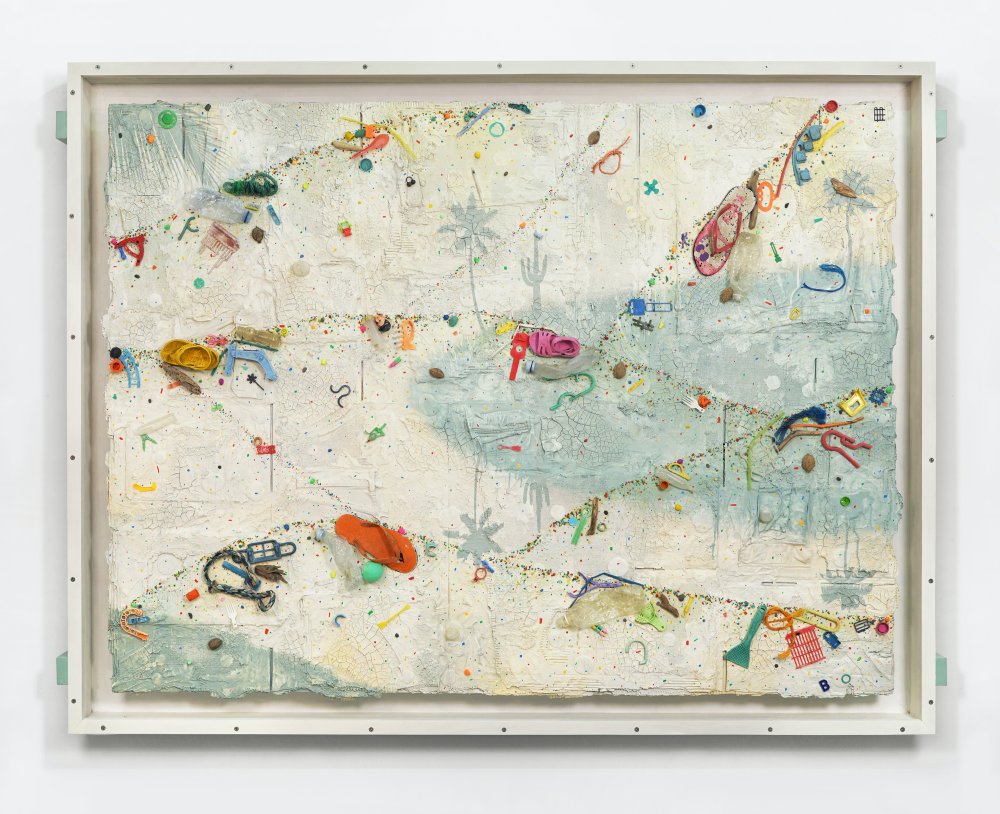 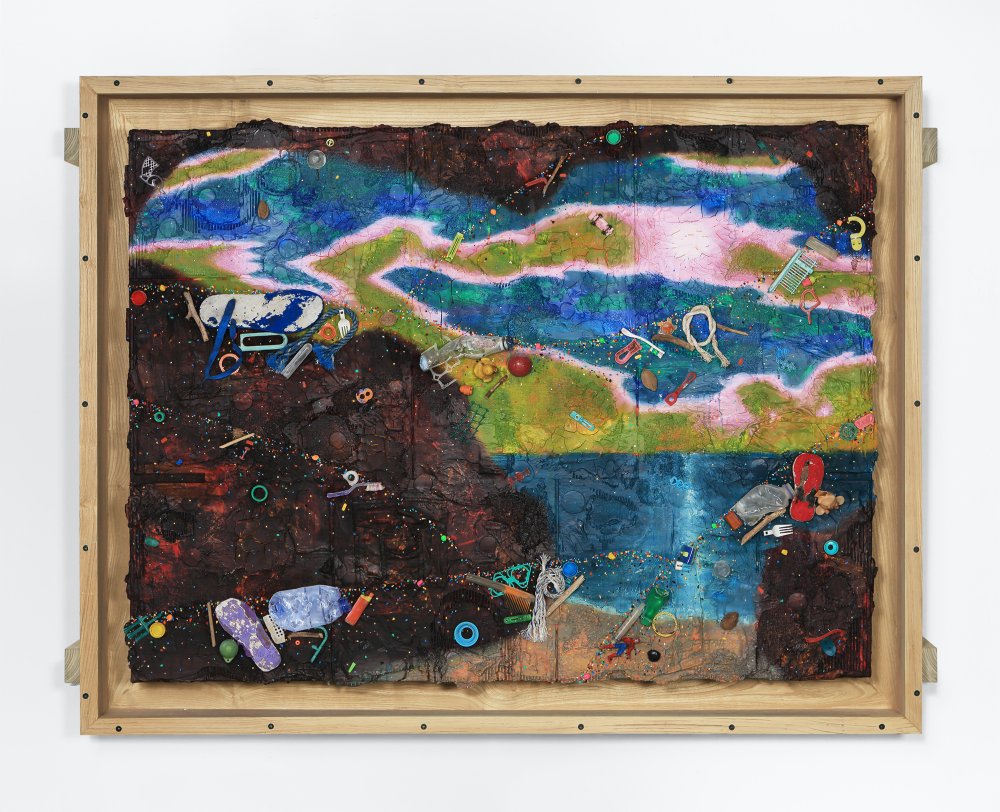 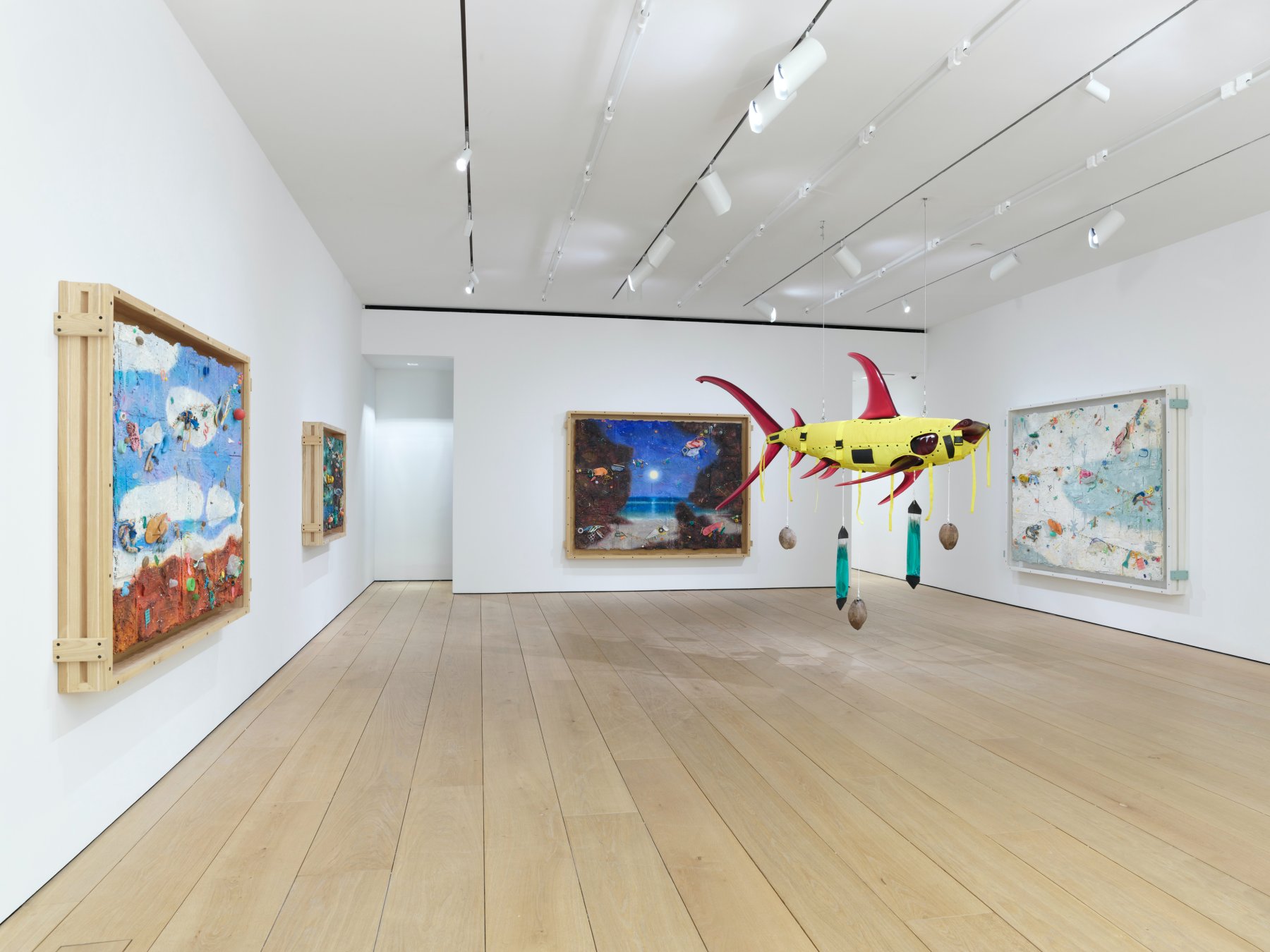 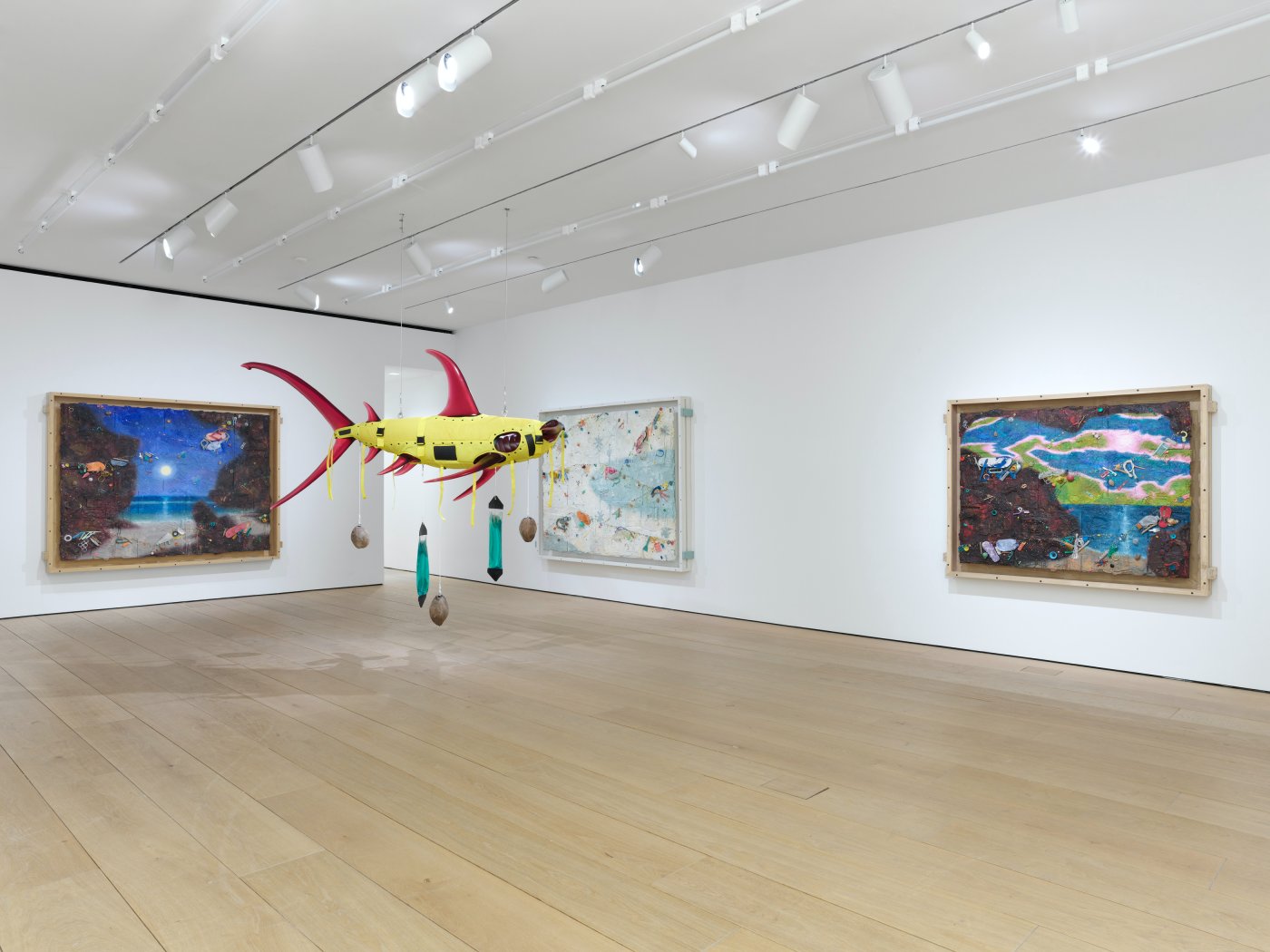 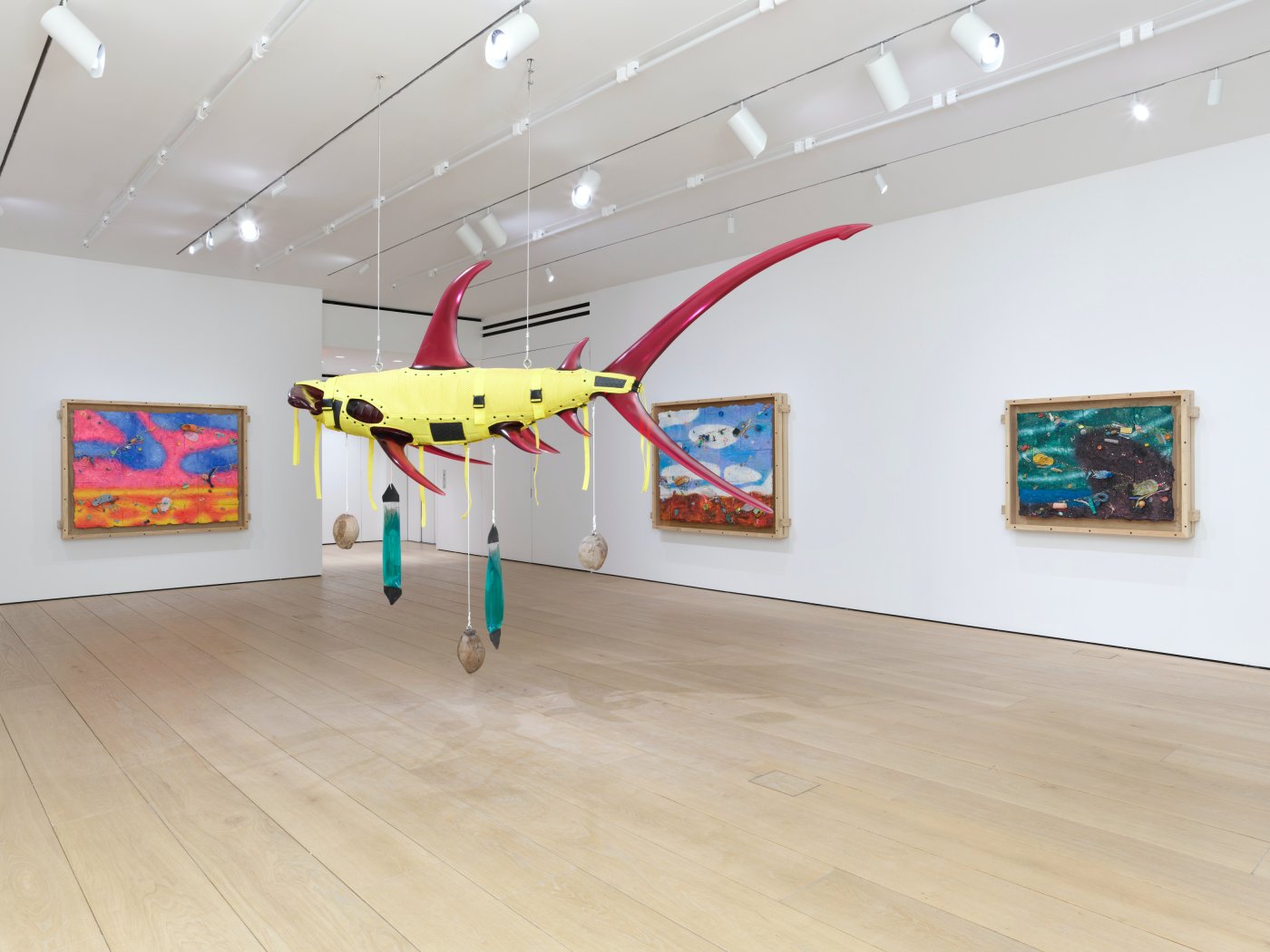 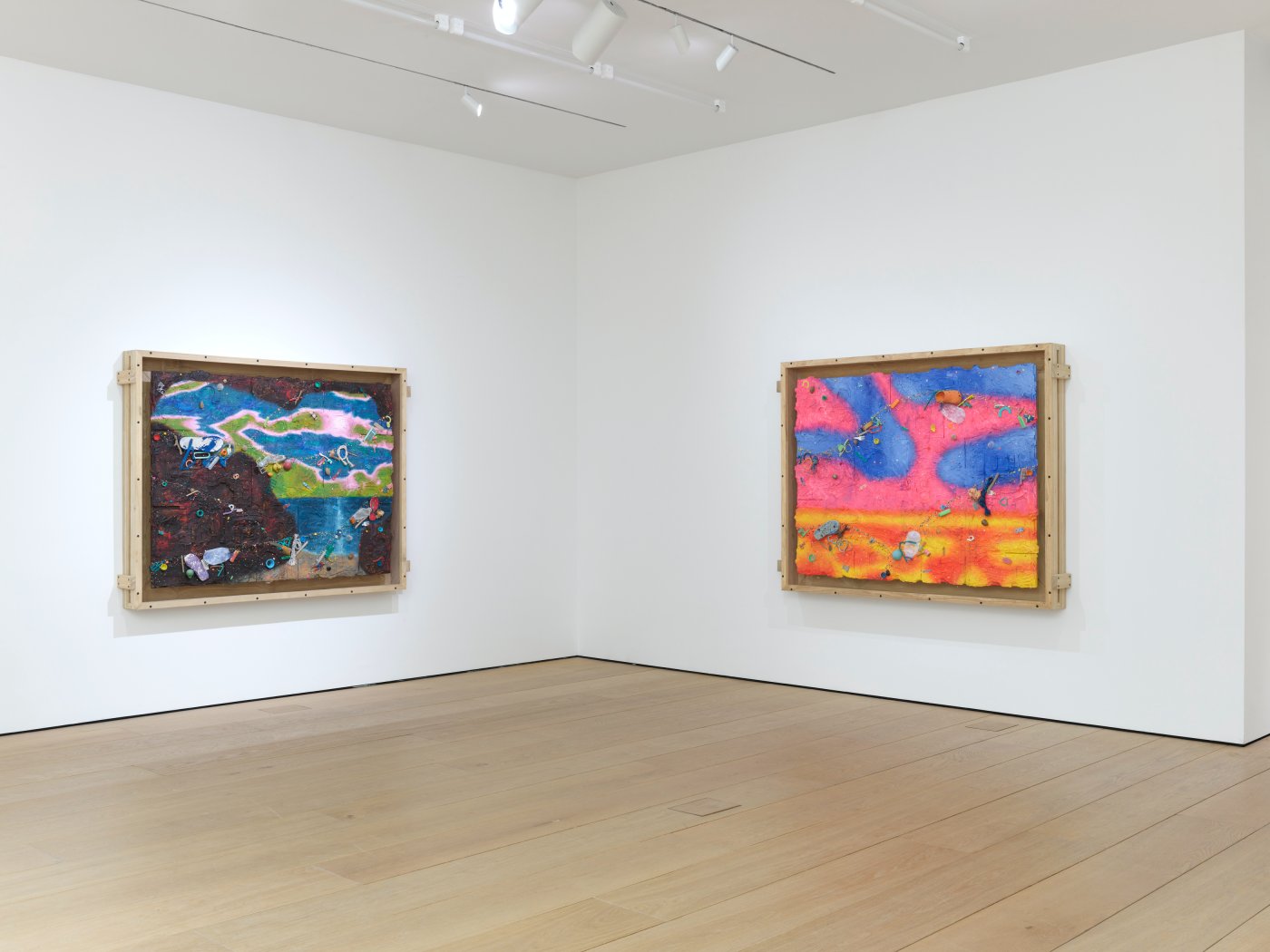 Bickerton is best known for his paintings and sculptures that insistently raise questions about the art object and many aspects of art production, from its cultural fetishization, to industrial fabrication, to stylistic branding, to art marketing and sales―particularly as these relate to the revered tradition of painting. The artist has spent much of his career experimenting with the hybridization of forms, materials, and methods. Often merging media, genre, and subject, Bickerton challenges the parameters of art making, calling into question the value, signification, and function of the art object itself. Since the 1980s, each of Bickerton’s series, though seemingly disparate, have been aligned in their often-critical evaluation of culture. For his most recent body of work the artist engages traditional landscape painting in order to examine the reality of today’s cultural and ecological landscape, both of which have been shaped irrevocably by human desire, consumption, and industrial waste.

Bickerton’s Flotsam Series takes inspiration from both organic and human-made debris that has made its way into our global waterways and washes up on beaches the world over. Initially inspired by the waste left by the receding waves at the base of the cliffs near his home in Bali, Bickerton became interested in the growing trash vortexes around the world (massive island-like forms comprised of human and marine debris). The works in the Flotsam Series, meticulously constructed by overlaying ocean born detritus over a painted textured base comprised of cardboard and discarded clothing on plywood, are thus contemporary pictures of the global landscape today. The paintings are framed in the artist’s signature wood crates―a reference to shipping containers―which recall Bickerton’s work from the 1980s/90s that questioned the role of the art object as a fetishized commodity. Padang Moon (2020) depicts an idyllic beach at midnight, the bright full moon illuminating the vibrant blue sky, deep green ocean, and sandy beach. Framing this scene are large boulders that partially obstruct our view, offering only a glimpse of the serene landscape beyond. The entire scene is littered with human refuse―flip flops, water bottles, combs/brushes, plastic soda can holders, fragments of children toys, toothbrushes, ropes―and natural detritus such as rocks, wood, shells, and sand. By merging the readymade landscape with abstract painting, Bickerton creates a work that engages both observed reality and that which often goes unseen or unacknowledged by the wider public. The artist states, “When I think about these pieces, I think of words and terms like flotsam, borderless oceanic detritus, seascapes, culturescapes, swirling cosmologies of micro plastics, fragments of human narratives, residues of lives lived, of vestiges of human presence now swirling in great molecular vortexes.”

The Flotsam Series invites comparisons to the romantic seascapes of JMW Turner, the backdrop compositions of Milton Avery, and the American landscapes of Albert Pinkham Ryder, Mardsen Hartly, and Ferrest Bess―but with the artist’s signature keyed-up palette that gives the work a clear Bickerton edge. Bickerton is not interested in landscape as a depiction of a specific place, but rather as a psychic trigger for human experience as it relates to the fate of the earth and vanishing natural spaces and resources. In Dawn Estuary (2020), the artist has created a white and seafoam green abstraction marked by lines of tiny plastic fragments, flip flops, a doll head, mouth guard, and plastic bottles, among other refuse. Rather than alluding to a seascape, Dawn Estuary resembles the aerial view of a beach. The lines created by the plastic fragments stand in for the patterns made in the sand by receding waves, while the background is marked by graphic imprints of palm trees, fronds, and cacti, referencing common symbols of idyllic landscapes. Bickerton has stated that, “In premodern China, elite painters used imagery not to mirror the world around them, but to evoke unfathomable experience.” Dawn Estuary, and the other works in the Flotsam Series, imbue abstraction with allusions to observed reality, inviting a critical investigation into the perceived natural order and the complex intertwining of the human species and the planet.

The works in the Flotsam Series are not meant as a call to environmental action or even a condemnation of the role human beings have played in the decimation of ecosystems, but rather present an accurate representation of the natural world in the 21st century. Bickerton does not consider himself an environmentalist in the traditional sense of the term: “To be an environmentalist, one must labor under the illusion that one is saving the planet. This idea is of course absurd, we are only struggling to maintain our niche and the planet’s ability to support us as a species. We cannot destroy the planet. It is ever resilient and adaptive, far bigger than us, and ultimately will just shake us off as so many fleas.” This series thus invites us to simply consider the trajectory of our planet’s future, and what we as human beings will leave behind at the close of the anthropocene.

Bickerton will have a solo exhibition at Lehmann Maupin New York in early 2022.

About In Focus
In Focus presentations are a recent addition to the Lehmann Maupin program that allow the gallery to highlight a crucial aspect of an artist’s practice. These installations offer public access to recent, or timely and significant works by the gallery’s artists and provide greater flexibility for Lehmann Maupin to contextualize its growing international program. Installed in the gallery at 501 West 24th Street or showcased online, these presentations run concurrently with the gallery’s existing exhibition program.