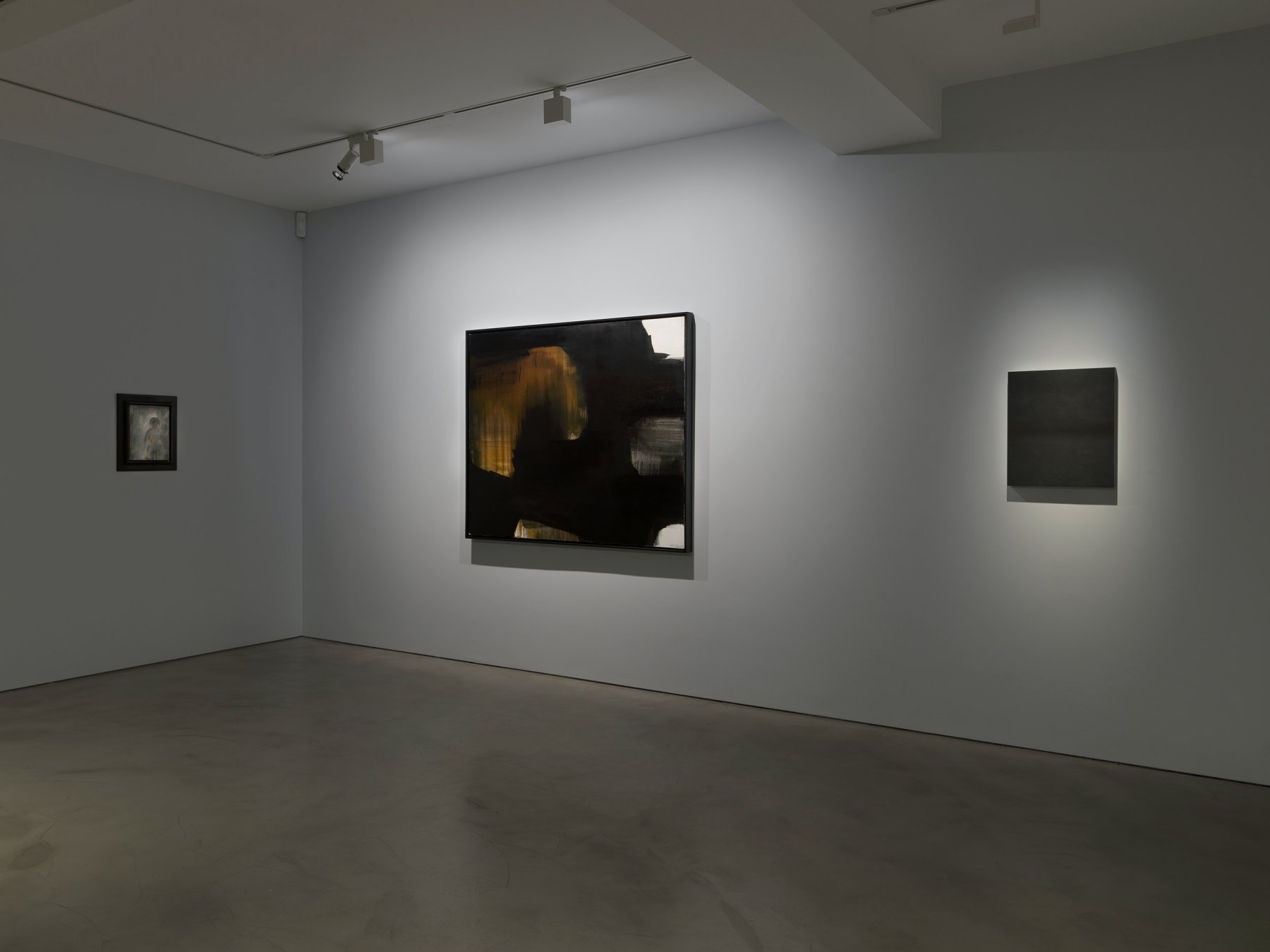 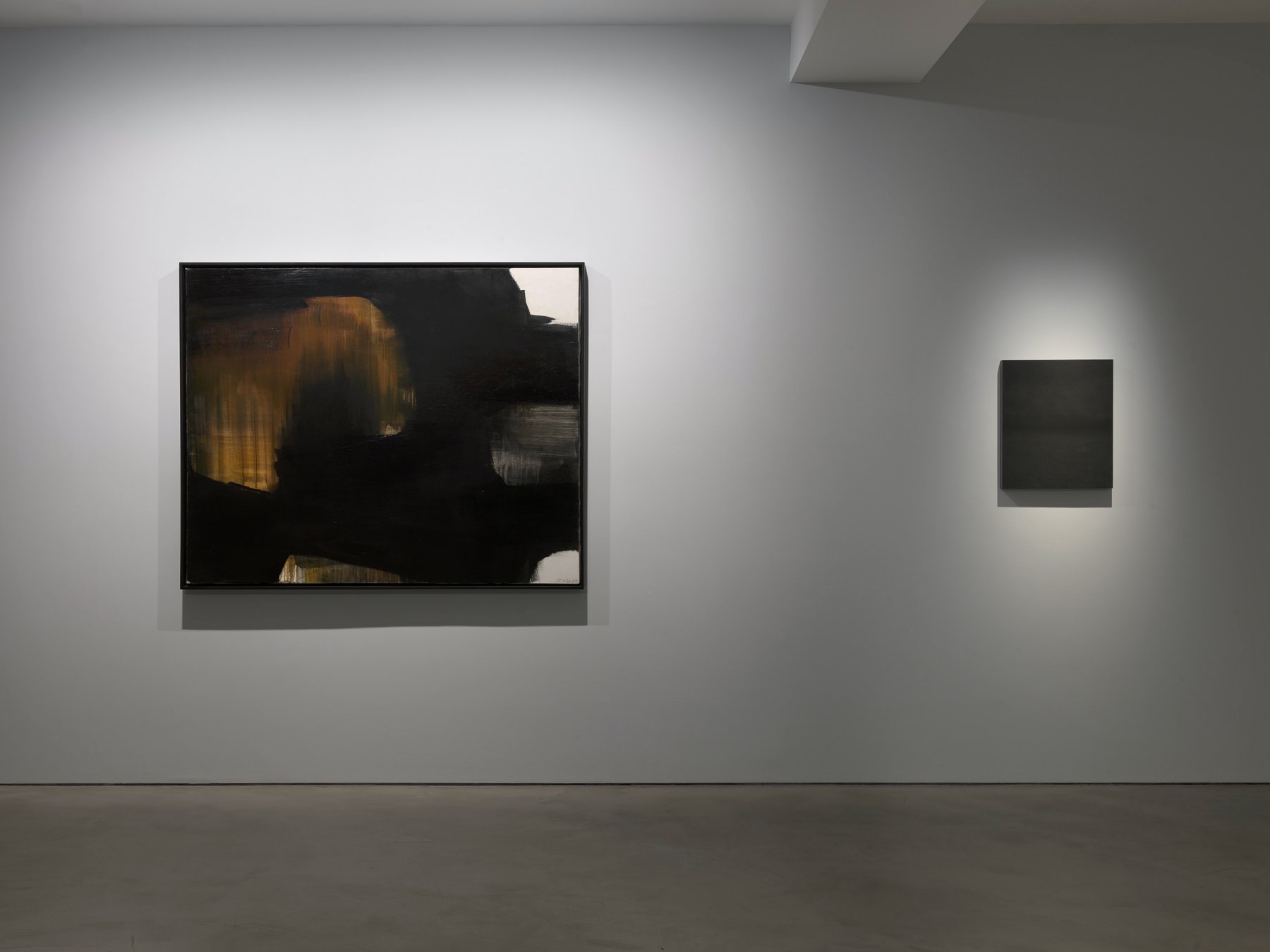 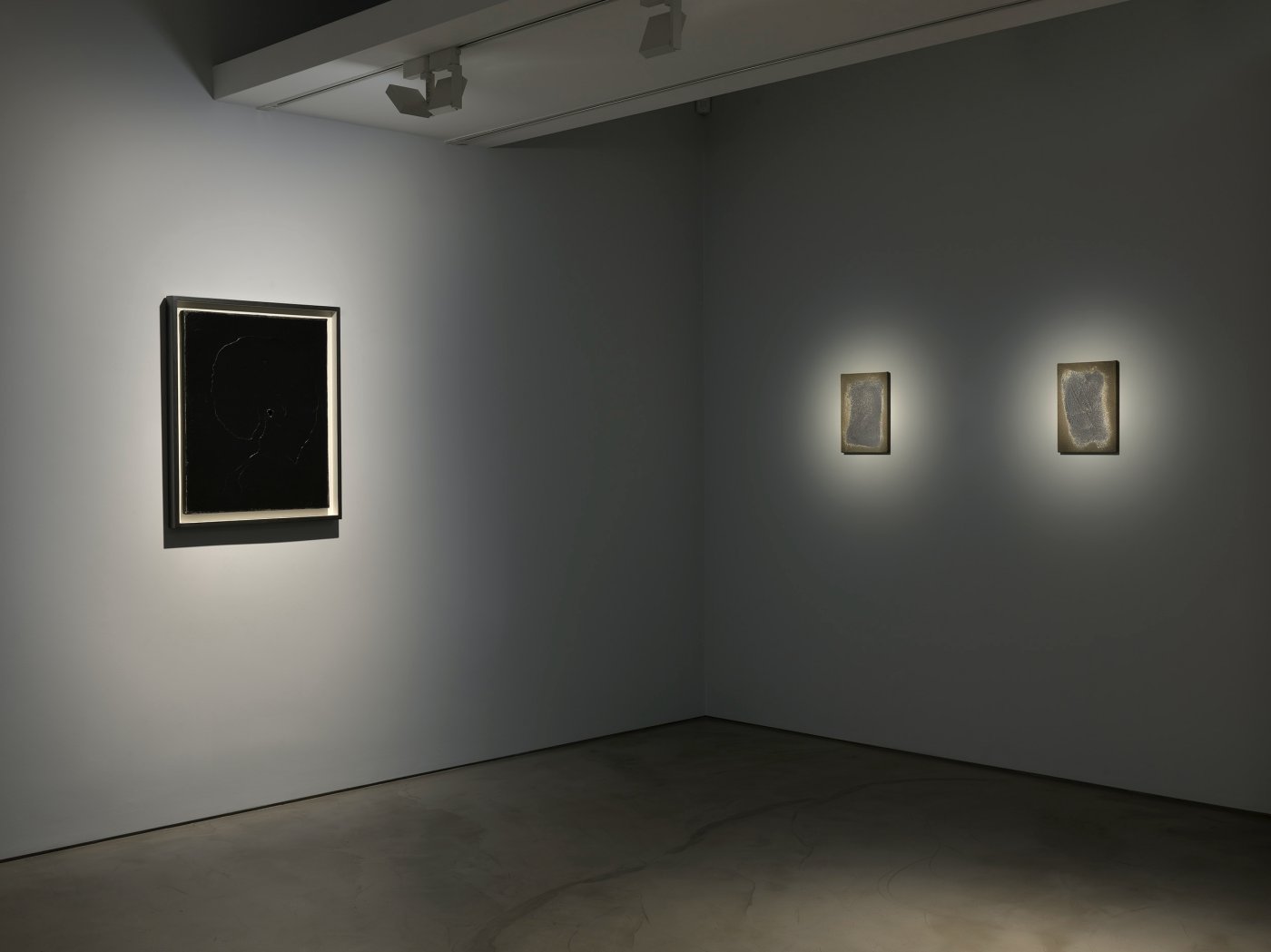 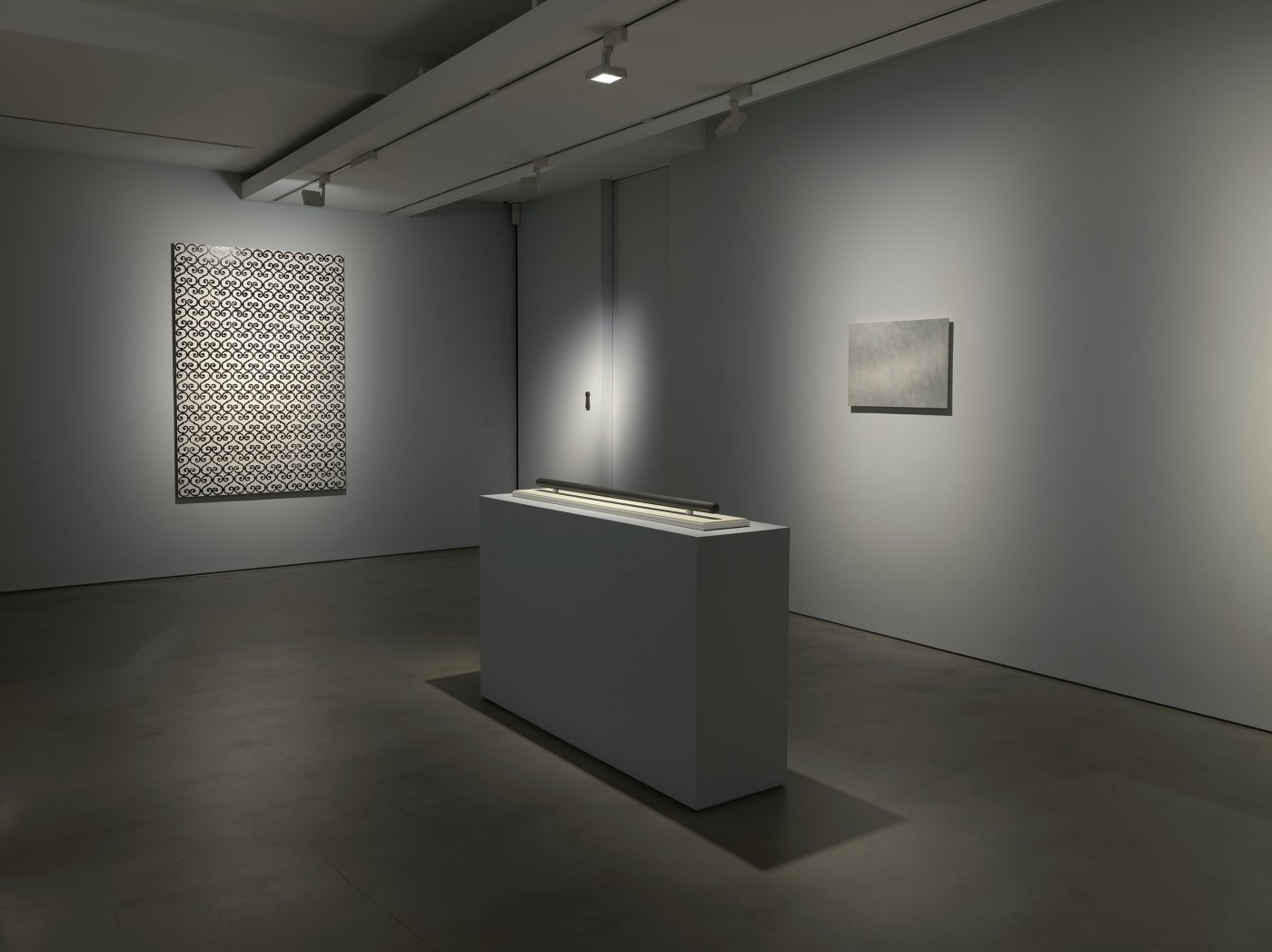 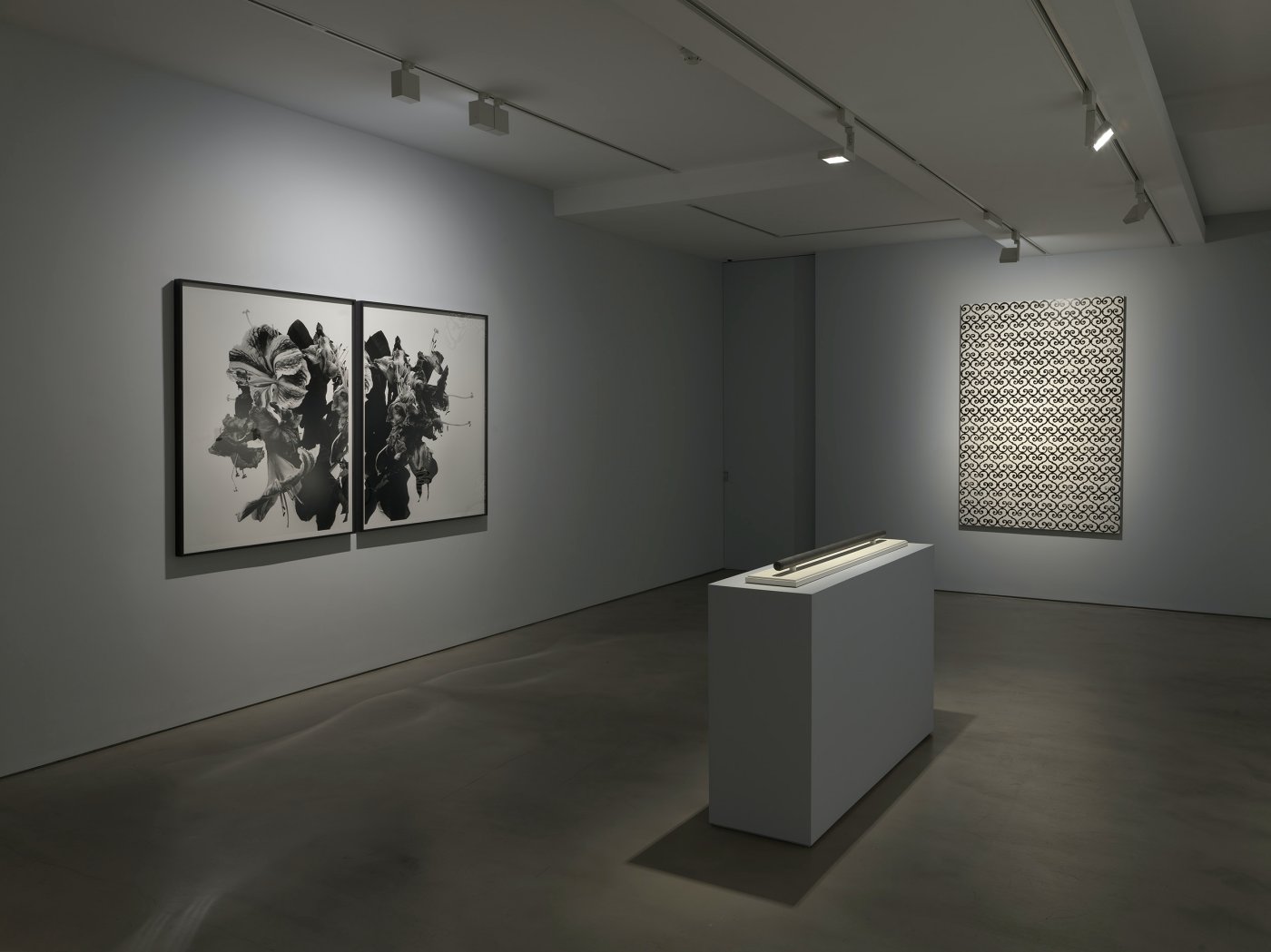 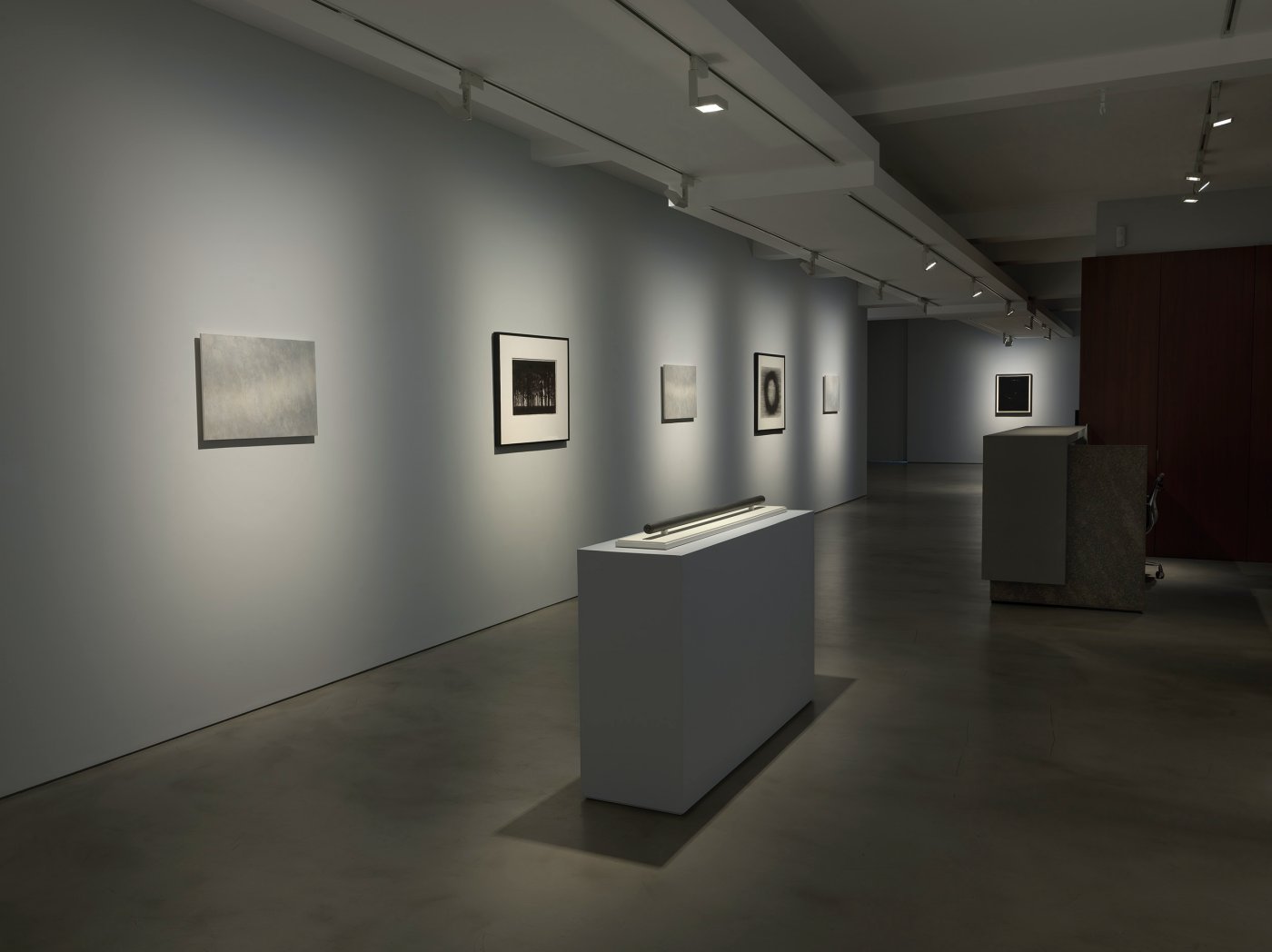 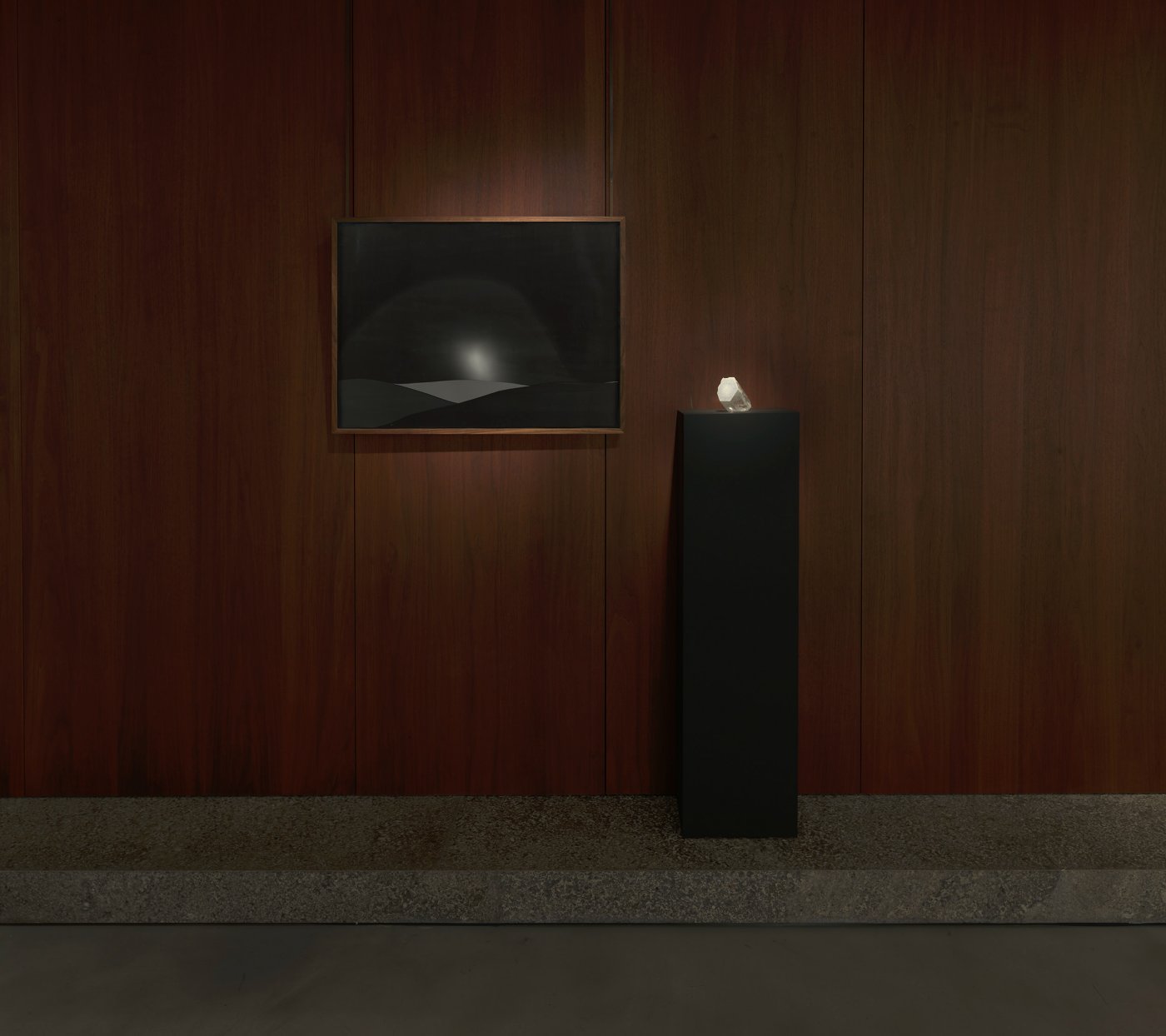 ‘In absentia’ is a latin term that literally translates as ‘in the absence’ or ‘while absent’. Fundamentally, the concepts of presence and absence are diametrically opposed, yet the term addresses the liminal space found between the two concepts: presence does not necessarily negate absence, nor does absence necessarily negate presence.

This indeterminate position between the dichotomy of presence and absence, whether one asserts or negates the other, is the unifying thread that runs through this exhibition, expanding the concept of ‘in absentia’ to address varied artistic and aesthetic properties.

The limited, or indeed complete absence of, colour palette in all the works in the exhibition embrace the liminality of chroma in absentia. This is apparent on a more immediate level in the works by Pierre Soulages and Lucio Fontana, where the limited palette asserts an alternative present; in the former, it is the compositional qualities that are brought to the fore, in the latter, the monochromatic intensity draws attention to its materiality. In Jacob Kassay’s silver electro-plated canvases, the concept of chroma in absentia resides more prevalently in the idea of what is colour itself. The work is technically achromatic, not utilising any form of pigment, yet the canvas takes on a nuanced palette through the electro-chemical process: colour is technically absent, yet abundantly present.

The notion of an object in absentia is raised in Adam McEwen’s exacting replicas in graphite and the untitled cast bronze keyhole by Robert Therrien, both of whom present a recognisable object in an unrecognisable form: the object is present but its utility, absent. Meanwhile, in Untitled, Christopher Wool appropriates a curlicue motif, filling the pictorial plane with its decorative form. The repetitious design evokes a wrought-iron gate, but also enacts it, visually halting the viewer with its stark immediacy; the obstructive presence of a gate is experienced, even in its absence. In contrast Nobuyoshi Araki’s From Close to Range presents an anthropocentric interpretation of this idea. The image, a monochromatic diptych of dying flowers, is a memorialisation of his recently deceased wife, Yoko. Suffused with melancholy, this portrait of love lost embodies the individual in absentia.

Running concurrent to these aesthetic interpretations of ‘in absentia’ is the prevailing understanding of the everyday semantics of the term as relating to the agency of an individual when not present. For instance, an individual may cast a vote ‘in absentia’, affecting the final outcome without actual physical presence.

In the context of the exhibition, this is interpreted as the pervasive ‘aura’ or ‘presence’ that bridges the threshold of familiarity and unfamiliarity in a dream-like way. This ‘aura’ is present in that it is felt by the viewer, yet is indeterminate: invoked not by a single element of the artworks, nor their specific subject but by the entirety of the work as an experience. It is physically absent yet phenomenologically present. This aura is the circular void of the Anish Kapoor’s Untitled (Circle), Robert Longo’s oneiric ‘fairy tale’ forest, the unnerving, phantasmagorical figurative outline of Jean Fautrier’s Petit nu and the elemental spirit of Makoto Ofune’s meditative abstractions.