Galerie Thaddaeus Ropac presents The Seeming Endless Path of Memory, an exhibition of new work by Imran Qureshi. Born in 1972 in Hyderabad, Pakistan, Imran Qureshi has developed a contemporary practice rooted in the tradition of 16th-century Mughal miniature art, encompassing figurative and abstract works on paper, painting and site-specific installation. 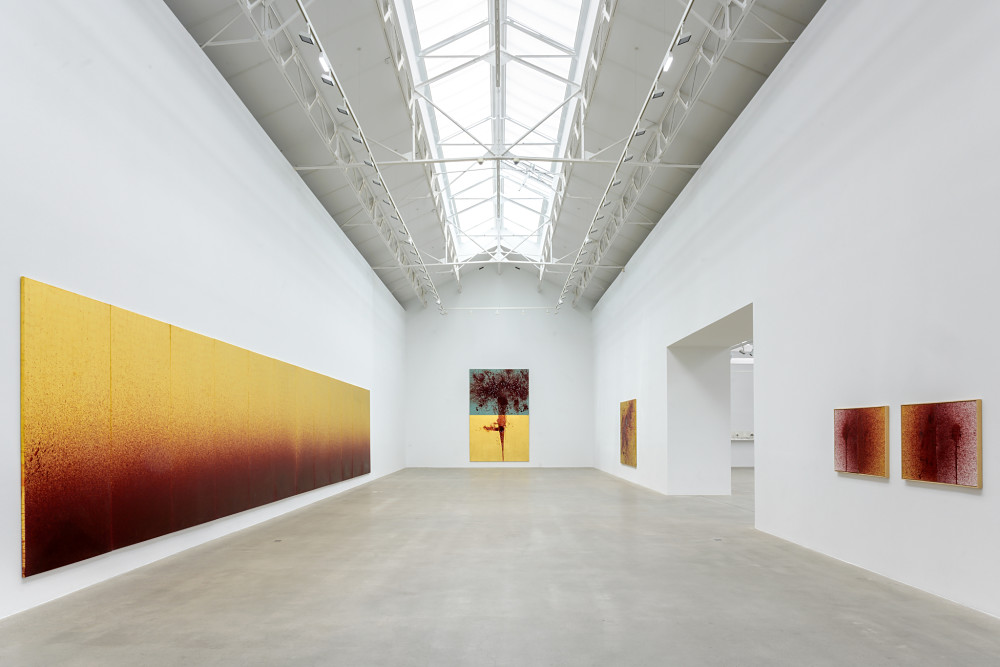 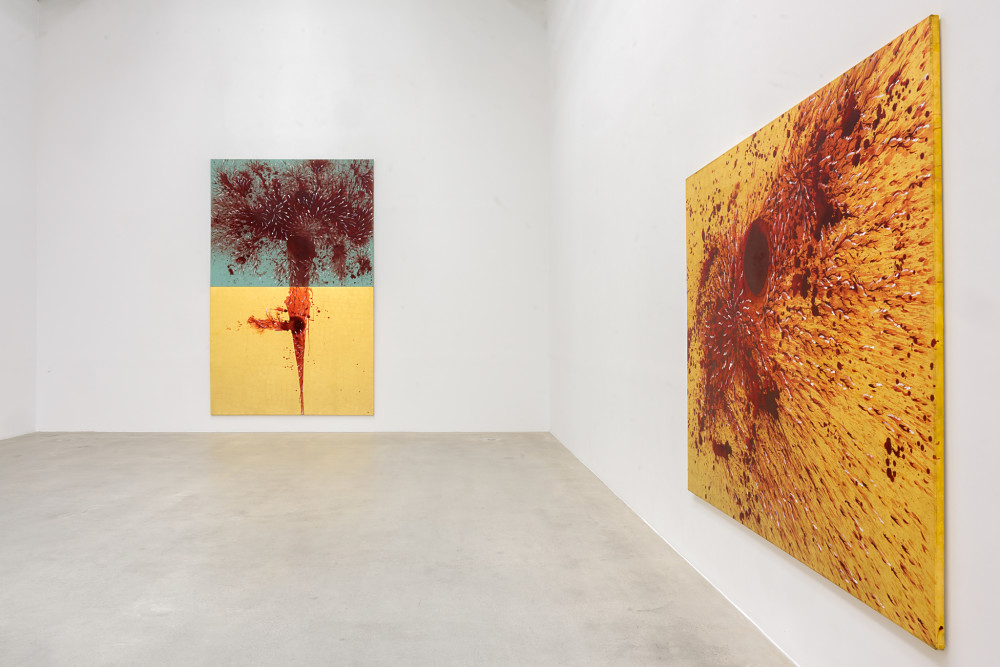 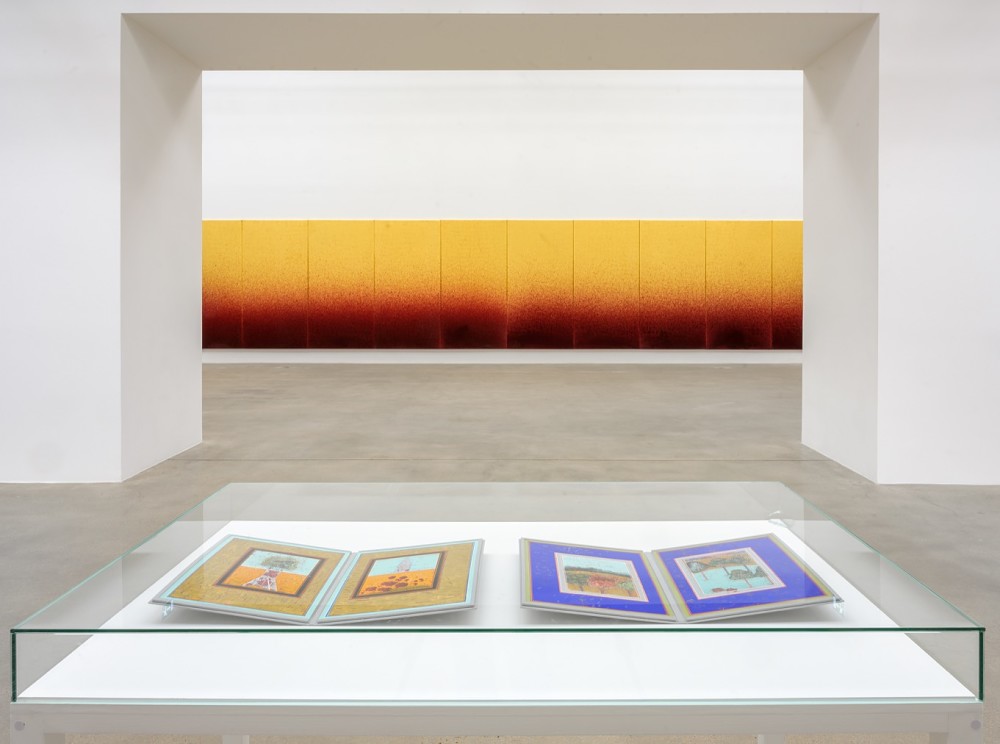 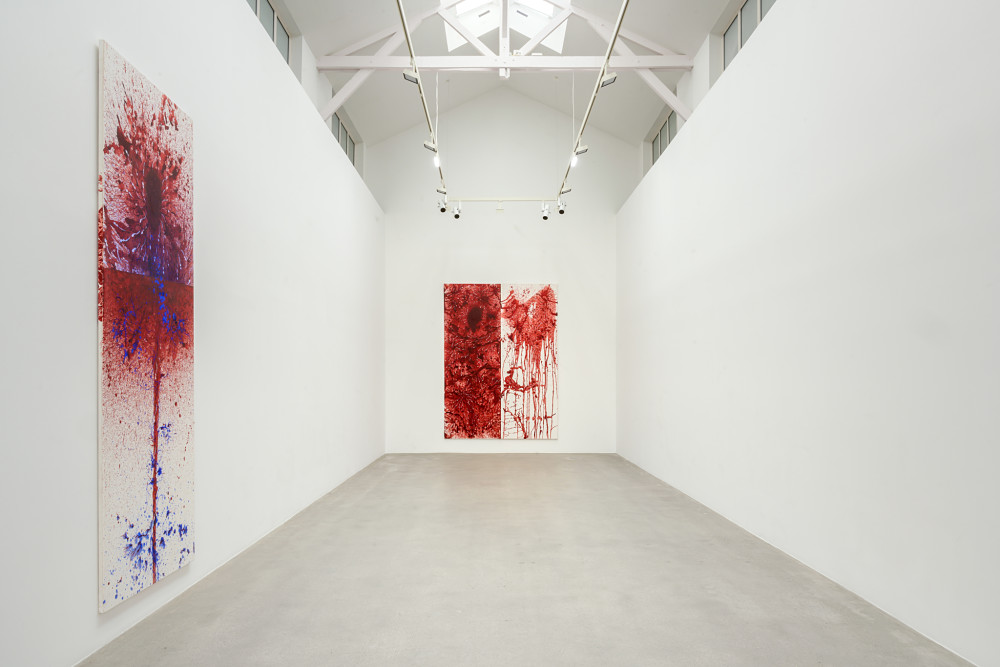 Resonating throughout the exhibition is the artist’s exploration of the infinite through the motif of the fold: the screen-like structure of his panel painting, with gradations from red to gold leaf and measuring ten metres in length, the undulating shape of an endlessly extending miniature painting, and the folded canvases of the relief paintings. The large-scale exhibition also features a series of distinctive miniature paintings exploring self-portraiture and the artist’s idea of landscape. Qureshi’s varied abstract paintings created over the last two years reflect at times the traces of his own body and personify the constant dialogue between monumentality and the minute.

The exhibition title, The Seeming Endless Path of Memory, along with the titles of the works on display, echo the words of Pakistani poet Faiz Ahmed Faiz (1911-1984) prevailing throughout Qureshi’s work. They reveal human metaphors, with various social and cultural connotations, and subtly reflect the threat of violence as a continuous motif.

In a number of works, dark layers of red or blue gradually transform into a light gold, the subtle and rhythmic changes of tonality appearing as one continuous course of action. Elsewhere, Qureshi draws upon the tradition of action painting, welcoming gravity, velocity, and improvisation into the artistic process: through direct physical engagement with the canvas, the act of painting becomes a performative part of the painting’s expression.

Throughout Qureshi’s practice, the artist reflects on the symbolic meaning of numbers. For example, the twelve panels of The Endless Path (2018), with delicately placed gold leaf and dark splashes of red paint, refer to the number twelve, which has more divisors than any other scaled relative. The power of the number itself and its scientific value has seen its integration into both culture and religion. The artist’s choice of specific numbers suggests a reflection on the relationship between the rational and the spiritual, the human and the divine, within the context of his contemporary practice.

Furthermore, the exhibition features a prominent series of miniature paintings depicting the Story of Two through finely painted trees that show a subtle unity and separation, akin to arteries of life juxtaposed against the self-portraits taking position of sole observer. The artist, in contemporary dress, is situated within an abstract background, surrounded by the detailed ornamental motifs of the miniaturist style – traditionally commissioned by the Mughal Emperors (1526-1857). Within the parameters of the small-scale, refined imaginary and the strictness of this ancient discipline, Qureshi uses a contemporary artistic language in an innovative way conveying complex political references. Ian Alteveer, curator of Qureshi’s 2013 Roof Garden Commission at the Metropolitan Museum of Art in New York commented on the artist’s miniatures: ‘There is an exquisite tension between the stringent parameters of this antediluvian miniature practice and the modernity of the depicted sitters – one that speaks in part to the friction of a world in which novelty collides daily with orthodoxy.’

The Truth Path spans the nave of the gallery and consists of fourty pages joined together. It is laid out in such a way to allow the viewer to walk along the increasing and decreasing folds. Depicting an imaginary landscape of trees, leaves, stones and dragonflies alongside missiles, it is rendered in soft shades with incursions of fine red vines reflecting an idyllic altered by a threatening undercurrent. In parallel, the work contains a sequence of numbered dots from one to 566, reminiscent of a child’s dot-to-dot book but also, through the number 566, connoting a spiritual reference The viewer is invited to trace the path meandering its way through an earthly landscape of life’s challenges.

Imran Qureshi’s more recent series of relief paintings Fabric of Heaven combines red acrylic paint with a gold-leaf surface, developed singularly along the multiple creases of its folded canvas to create a mesmerising visual experience. The characteristic use of gold-leaf is a recurring motif in Imran Qureshi’s work. The luminosity of gold-leaf alludes to the celestial plane, contrasting with the stark splashes of red and ornate vine motifs encroaching the canvas through its multiple folds. Curator Stinna Toft wrote on the occasion of Imran Qureshi’s exhibition at the Kunsten Museum of Modern Art in Aalborg, Denmark: ‘applying the valuable gold leaf is a time-consuming task, but its effect on the large formats is monumental. The surfaces of the paintings are like small landscapes, or skin caressing the paper or canvas. (…) The painting’s skin becomes a symbol of the vulnerability of the human body. The effect is powerful and menacing (…) and makes Imran Qureshi’s paintings distinctly physical and sensuous.’

Present in various works throughout this exhibition, is the historical idea of ‘heaven’ in opposition to violence and nature, an idea that proves crucial in the understanding of Imran Qureshi’s artistic universe. The dark red as a clear allusion to violence and death contrasts with the delicate pattern of red vines and flowers. They work together in a striking manner, as if simultaneously attacking both the painting and the metaphorical idea of heaven. Whilst the colour ‘red’ on the first hand alludes to splashes of blood, the flower motifs shaped by the paint evoke the possibility of renewal and life. For the artist: ‘the flowers that emerge from the paint in my work represent the hope that – despite everything – the people sustain somehow their hope for a better future’.

Imran Qureshi’s works are modulated through a socio-political reflection on the precariousness and inherent violence of the contemporary world. Ultimately, whether presented in large-scale or in miniature formats, his works tend towards an aesthetic, religious and spiritual inquiry on the proximity of creation and destruction and recreation in all aspects of life – engaging the viewer on both a visceral and spiritual level.