Iman Issa: PROXIES, WITH A LIFE OF THEIR OWN

Iman Issa: PROXIES, WITH A LIFE OF THEIR OWN 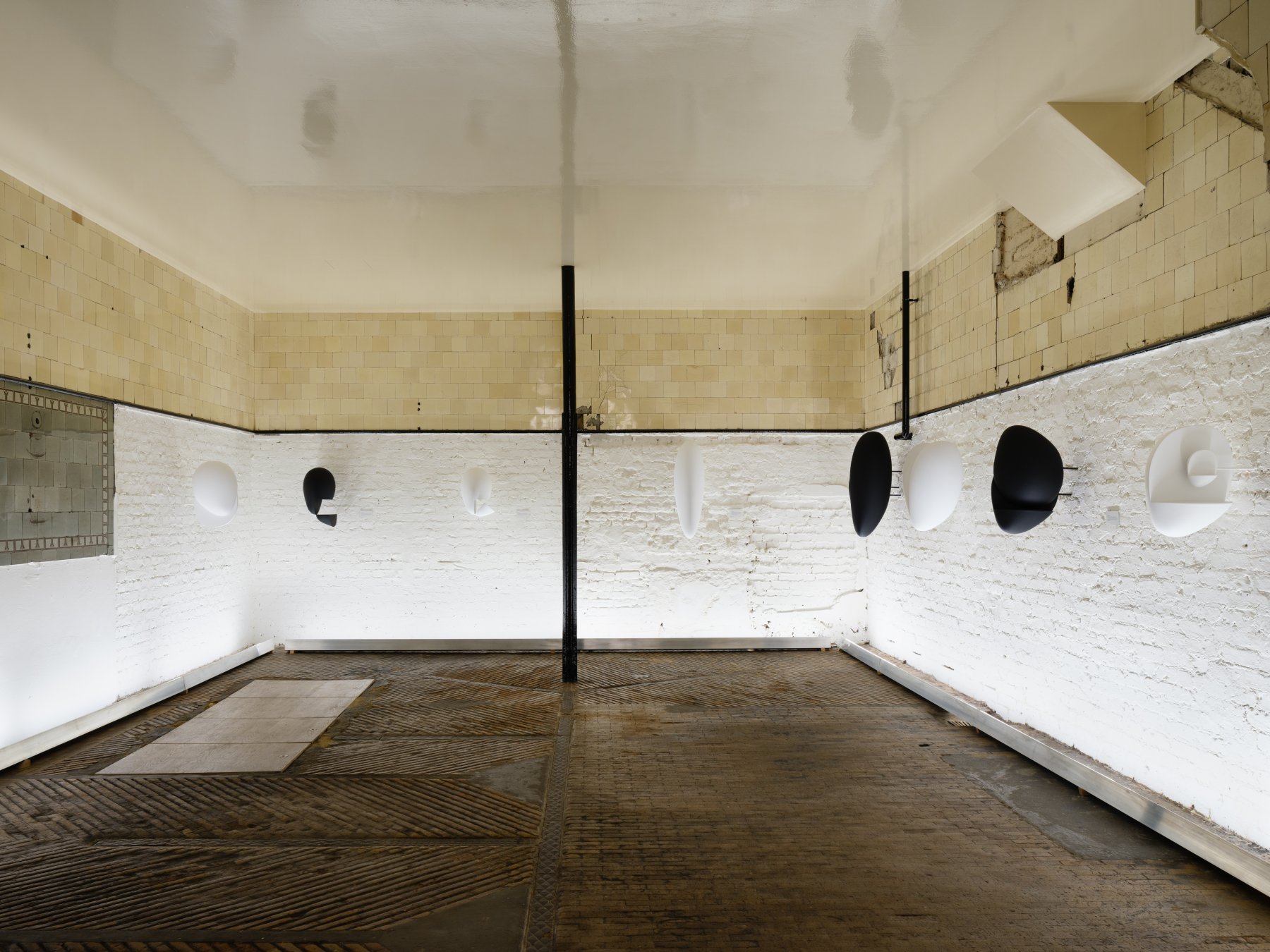 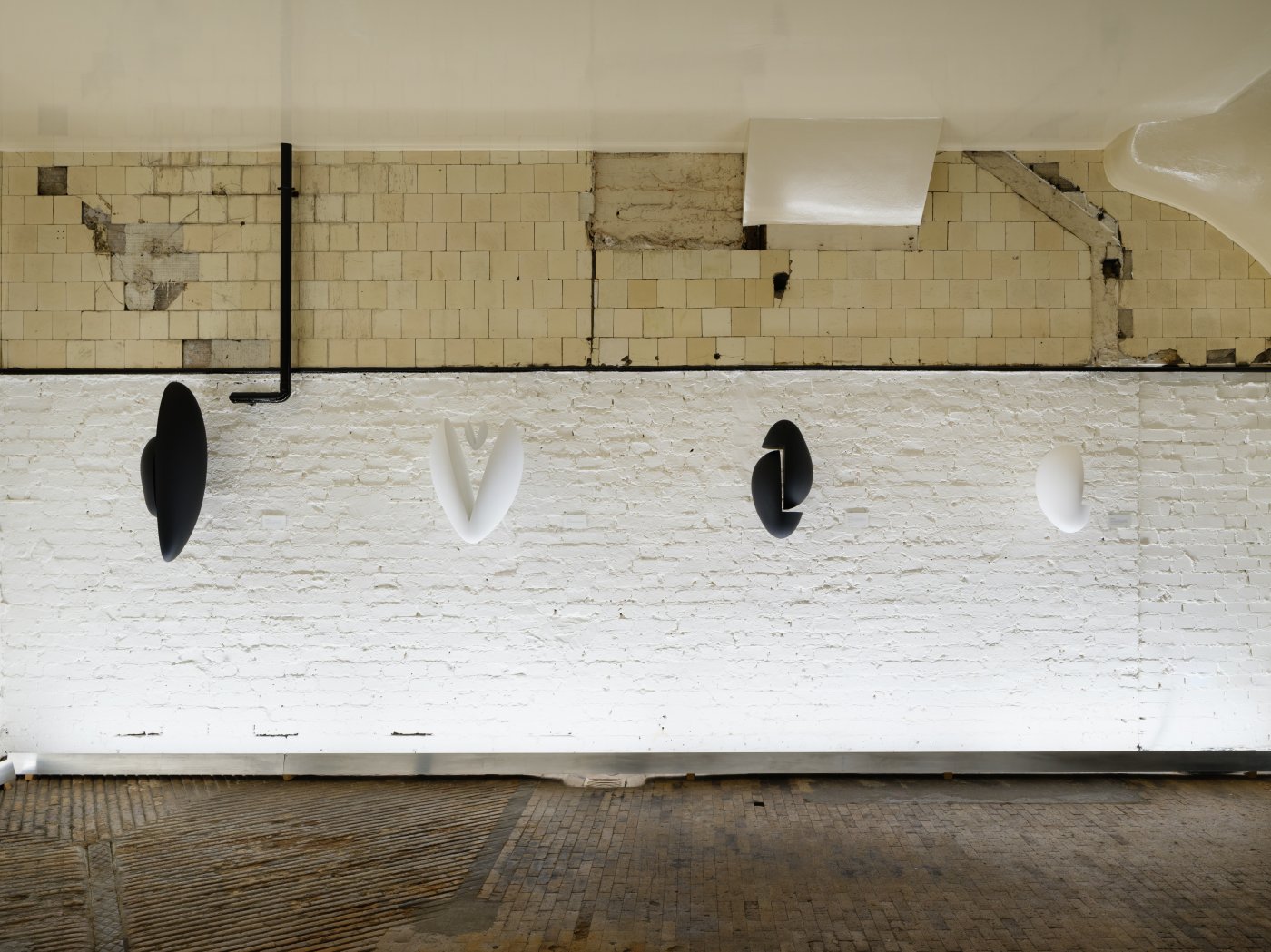 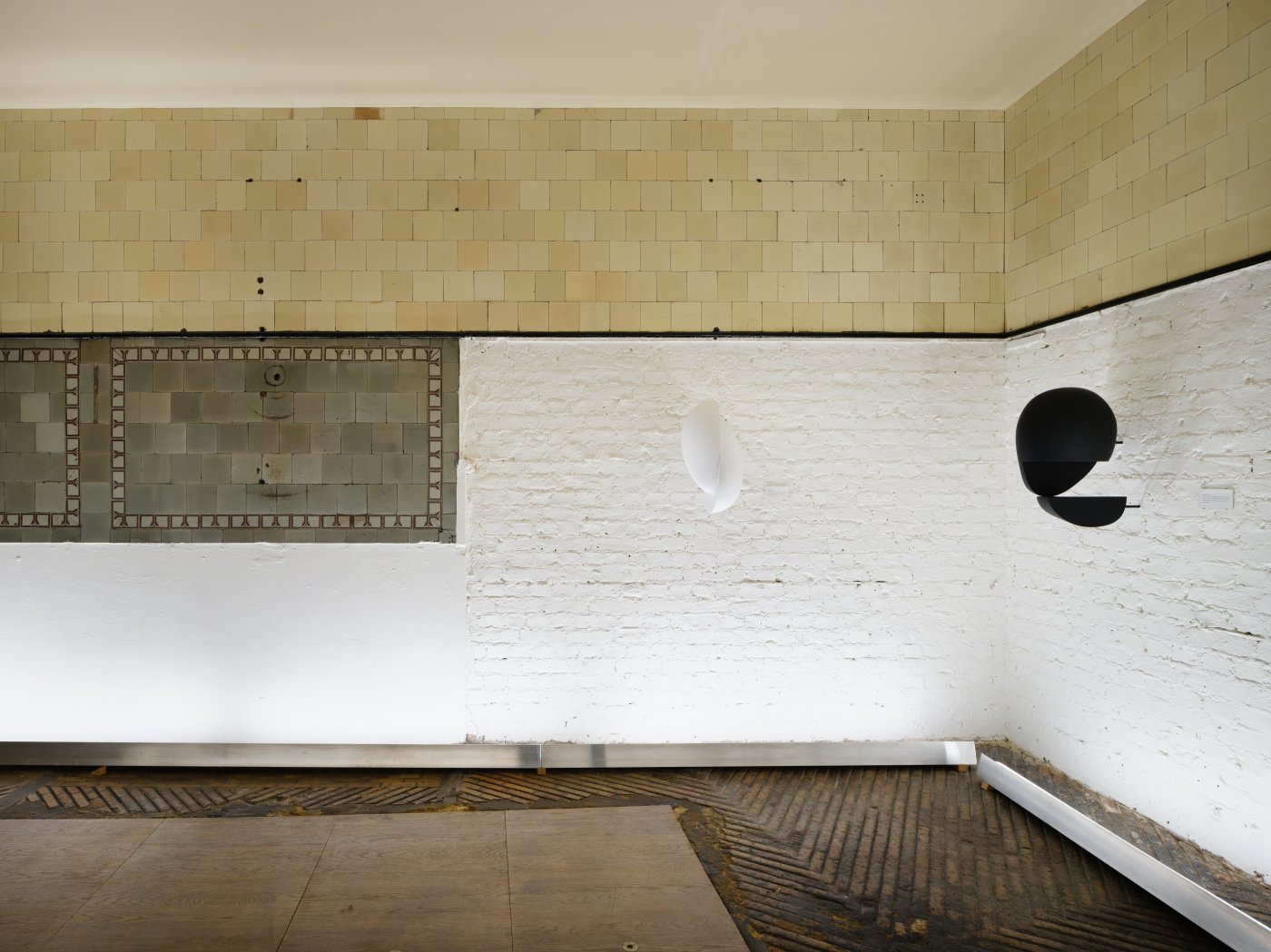 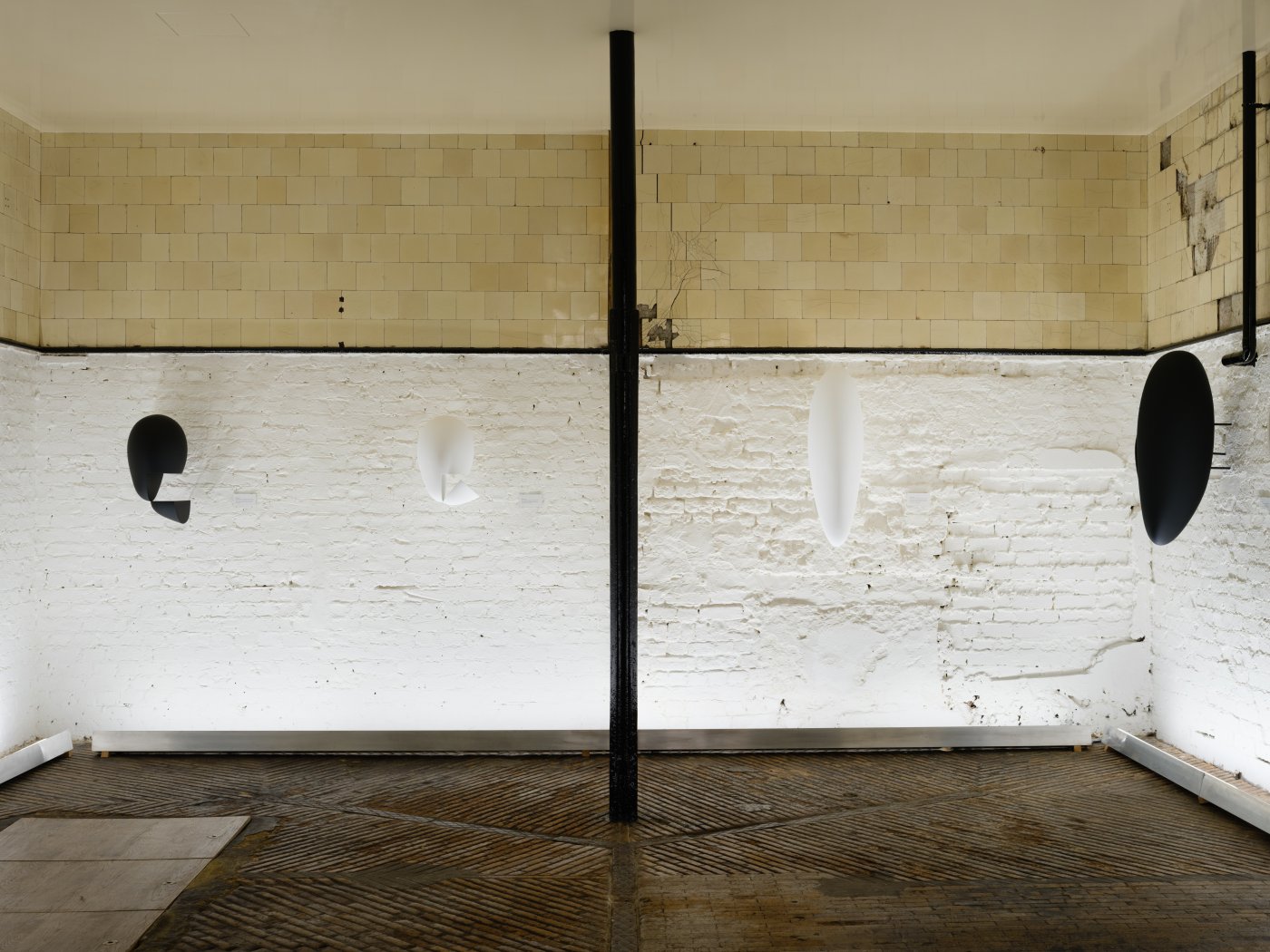 Shown in its entirety for the first time in London, Iman Issa began her series “Proxies, with a Life of their Own,” in 2019, with the shape of a head. Every iteration of the work since then has involved the same head, only stretched out, broken open, or cut in half. Issa wanted the original shape to be exactly the same every time, so she drew it first and had it 3-D printed. Then, she would take the heads to a paint studio, where they were covered with acrylic in white or black but never a color. The resulting works exist in the world as sculptures composed of pieces: two halves of a white oval, with the left half mounted on a wall slightly higher than the left; or the same oval in black with the lower right quadrant cut out and tilted over on a right angle to the chin; or the oval elongated to the shape of an absurdly exaggerated egg; or the oval creatively divided, as if someone had split a face down the middle of the nose and across to one ear, taking half the forehead, the eyebrow, the eye, and the cheekbone, and flipping this part upside down and turned around and nestled back into the other three-quarters of the head. Puzzle it out, the sculptures seem to say, as so many of Issa’s works do.

Next to these sculptures are small text panels behind glass, identifying the works as self-portraits, and also, at the same time, as portraits of other people, usually literary figures. Each text panel includes what Issa refers to as a qualifying statement, sometimes a quotation, other times a paraphrase of something the writer or thinker once wrote or said. The statements, attributed to people ranging from the philosopher Hannah Arendt, the poet Georges Henein, and the prominent feminist Doria Shafik to the writers William S. Burroughs, Taha Hussein, and Christa Wolf, are lines and references that Issa has come across in her reading and thought to herself, “I relate exactly but at the same time I don’t fully understand.” That capacity for paradox, for two opposing things being simultaneously true, and for holding opposites in the tension of a single object, defines much of the work that Issa has been making for twenty years.

Issa has spent large parts of her life living in Cairo, New York, and Berlin. She started out a painter, then moved into photography, made videos and sound installations, wrote compelling and elusive texts, and is most often considered a sculptor these days. But her answers to the question of medium remain highly variable, and deliberately so. What links her works together, from her early photographs and sculptures made of wood, glitter, bits of mirror, and colored light bulbs through the masterful chains of association that fire long-term series such as “Triptychs,” “Material,” and “Common Elements,” is both a method, of consistently stripping away identifying details—footholds that would give viewers an illusion, reliably false, of knowing what the artist is up to—and a sustained inquiry into how meaning is produced, communicated, and received. That suggests, in effect, that her work is a constant, rigorous, and probably inexhaustible search for the forms that may tell us something about how meaning is made, and why.

For what is arguably the most ambitious of these series, titled “Heritage Studies,” of which a selection is shown in Piraeus, Issa has plotted out forty-six sculptural displays since 2012. She began making them in 2015. Forty have now been produced, including objects that appear like plinths, pyramids, brass crescents and spirals, and an oversized pencil stub rendered in copper. While earlier or parallel series have explored the weird temporal slippage and bombastic rhetorical moves of national or cultural monuments, or the moments in autobiographical writings when private experience crosses over into public life, “Heritage Studies” delves into history, the compulsion to look to the past, and conventions of museological practice, juxtaposing sculptures that often distill more decorative or intricate objects into a precise language of lines, forms, and volumes, with exceedingly brief texts that refer to relics from antiquity to the eighteenth-century, which themselves may (or may not) exist in all manner of archeological, ethnographic, regional, provincial, encyclopedic, and blockbuster museums.

Issa’s method of paring down to form is neither heroic nor virtuosic. The point is not to showcase artistic genius, either in herself or in others. Issa’s commitment to form is deeply philosophical, possibly even ethical, though she would never spell that out for you as a viewer. She would expect you to figure it out for yourself and to struggle through the work and the fusion of meaning it proposes in a system that you have to piece together in your mind. So meticulous is her language that one can forget that Issa’s works are often funny, albeit with a dry sense of humor. Her insistence on the elusive and the cryptic, the mystery and the riddle, is a gesture but never a gimmick. Dramatic lives, uncomfortable memories, complicated politics, and complex geographies are all present in the work, just not in familiar or easily digestible formats. True to themselves, they are conveyed through positions, relations, and associations. They communicate as shifters: your east is my west, or perhaps my center. Again and again, Issa’s work refuses pat divisions between form and content, self and other, art and life, public and private, abstraction and figuration.

What did it mean for Doria Shafik, a major figure in the Egyptian women’s movement, to say that women were both different and no different from men, or for Georges Henein, one of the founders of the pioneering (and distinctly political) surrealist group Art et Liberté, to say that only the silent had no contempt for language and he was not one of them, or for Hannah Arendt to waver on issues of shame and for William S. Burroughs to equivocate on issues of control? How does one resolve an argument with oneself, or a text, or an artwork? It may be somewhat irresistible to see in the generic shape and lack of color in Issa’s “Proxies” a faint echo of Man Ray’s photograph, as captioned by Vogue, of a mother of pearl face with an ebony mask. But that kind of association is in fact exactly what Issa’s work wants to question. Her displays arrange for an operation to occur, which calls attention to and opens up those links. If we think so much in relation to objects, relate to them, and see ourselves in them, then we might as well understand what we are doing. And no, the shape of the head in “Proxies” is not hers. Of course it’s not.

Installation view, Iman Issa, Proxies, with a Life of their Own, Rodeo, London, 2022. Courtesy the artist and Rodeo, London / Piraeus. Photo: Lewis Ronald