The genesis of the Arte Povera movement is, in many ways, inseparable from the history of Ileana Sonnabend’s legendary gallery. In celebration of the fiftieth anniversary of the movement’s inception, Lévy Gorvy presents Ileana Sonnabend and Arte Povera. 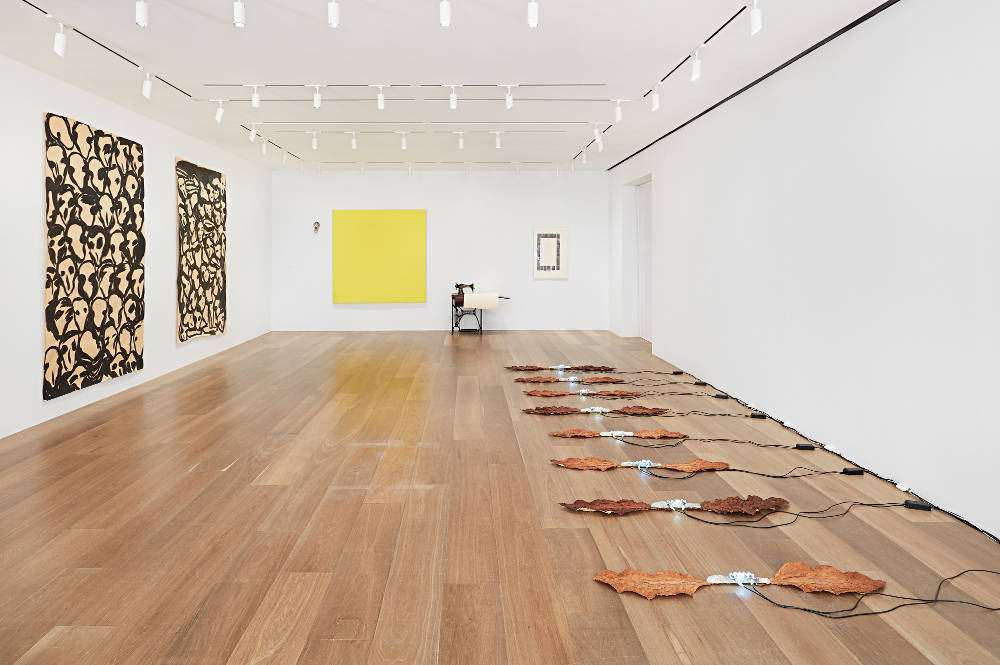 Installation view of Ileana Sonnabend and Arte Povera: Curated by Germano Celant, on view at Lévy Gorvy from November 2 through December 23, 2017. Courtesy of Lévy Gorvy, Photography by Tom Powel

Curated by the renowned art historian and Arte Povera forefather Germano Celant, this exhibition is the first to investigate Ileana Sonnabend’s central role in the international reception of Arte Povera, and the close friendship between Celant and Sonnabend that grew out of their shared interest in the Italian artists.

“The process of bringing together this project at Lévy Gorvy has been a personal journey,” said Germano Celant, curator of the exhibition. “My memories of Ileana and Michael Sonnabend go back to our first meeting at Venice Biennale in 1964. My friendship with them continued for decades, and our affection for each other was strengthened by professional exchanges. Ileana’s contribution to Arte Povera artists was profound: she brought them into an international context. Today, this exhibition celebrates her work and shares this history, from 1962 to 2014.”

Arte Povera, or “poor art,” began in 1967 with a small group of young artists in Bologna, Genoa, Rome and Turin. They were noticed by Celant, who gave the artists a name and mission in his text “Arte Povera: notes for a guerilla warfare,” published in Flash Art in November 1967. Although the artists were interested in new possibilities for international exchange and collaboration from the beginning, they purposefully set themselves against the hegemonic American art of the time, particularly Minimalism, which they considered impersonal, and the materialistic sensibilities of both Optical Art and Pop Art. Indeed, Celant positioned the movement as an insurrection and its artists as radicals, and the artists of Arte Povera engaged with the politics of representation and the structure of labor in postwar Italy, often with subversive, wry wit. Recognizing the revolutionary potential of these “poor” artworks, Sonnabend introduced Arte Povera to the American art world through a series of influential exhibitions.

Highlights on view
Highlights of the exhibition include Michelangelo Pistoletto’s enigmatic Marzia con la bambina (1964), which was featured in Sonnabend’s first exhibition of the artist’s work in 1964. This early mirror painting stages the artist’s wife, Marzia, and their daughter, Cristina, with their backs to the viewer, demonstrating Pistoletto’s theatrical impulse, and creating a tension between the static painted figures, who the viewer can never fully see, and the circumstantial, frenetic movements reflected in the polished steel surface. Also included in the exhibition will be Gilberto Zorio’s canvas, copper, and concrete sculpture Untitled (1968), which was included in Sonnabend’s 1969 solo exhibition of the young Italian artist in Paris; and Giulio Paolini’s Autoritratto col busto di Eraclito e altre opere (1971–72), exhibited at Sonnabend Gallery in New York in 1972.

Merz’s Igloo (1971), on loan from the Walker Art Center, Minneapolis, will be on view. This work, which was included in Sonnabend’s first Arte Povera exhibition in New York, is emblematic of Merz’s most renowned series, which he began in the late 1960s using a variety of materials, including neon lights, glass, stone, clay, wood, fruit, wax, and metal tubes. In 1971, the artist described the igloo as “the ideal organic shape—both a world and a small house—a synthesis, a complex image.” In this way, the igloo becomes both a site of shelter and a site of habitation, evoking the ways in which primitive modes of survival create social and cultural norms. Merz’s igloos attempt to answer the artist’s questions: “Is space straight or curved? Do houses move around you or do you move around houses? What does making a house mean?’ In addition to Igloo, one of Merz’s acclaimed Fibonacci works will be installed on the building’s façade.

The Sonnabend Gallery
In autumn of 1962, Michael and Ileana Sonnabend opened Galerie Ileana Sonnabend in Paris. They exhibited not only the work of American artists, but also work by several young Italians, beginning with Michelangelo Pistoletto in 1964. In addition to Pistoletto, Sonnabend would go on to exhibit work by Giovanni Anselmo, Pier Paolo Calzolari, Jannis Kounellis, Mario Merz, Giulio Paolini and Gilberto Zorio. When she opened her New York gallery in 1970, she brought work by the Italian artists along with her, introducing Arte Povera to the American art world.

The Sonnabend and Arte Povera circle was composed not only of artists, but also of collectors, art dealers, curators, critics, and friends. The central figure of the movement was curator and critic, Celant, who fervently supported postwar avant-garde art with a desire to internationalize the art of Europe, and particularly Italy. With these aims, Celant found a likeminded partner in Ileana Sonnabend.

The two would go on to organize Giulio Paolini’s first US solo exhibition at Sonnabend Gallery in New York in 1972, for which the artist produced a series of eight new paintings meant to provide an overview of his conceptual strategy. They were among the first gallerists and curators to become key figures in the immediate postwar period, working to define and defend contemporary movements, encourage artists to produce new work for groundbreaking exhibitions, and develop a strong sense of collaboration, community, and interconnectedness in the newly global art world.

About Germano Celant
Germano Celant, renowned art historian and theoretician, internationally acknowledged for his theories on Arte Povera, has served as the curator of hundreds of exhibitions worldwide and published more than one hundred books and catalogues. A longtime Contributing Editor to “Artforum” and “Interview Magazine”, Celant writes regular columns for the Italian magazines “L’Espresso” and “Interni”. In 2013 he received The Agnes Gund Curatorial Award from Independent Curators International, New York. From 1995 Celant was the Director and since 2015 he is the Artistic and Scientific Superintendent of Fondazione Prada. He is also the curator of the Fondazione Aldo Rossi in Milan, and of the Fondazione Emilio e Annabianca Vedova in Venice. He was the Senior Curator of contemporary art at the Solomon R. Guggenheim Museum in New York from 1989 until 2008, the Co-Director of the first Florence Biennale (1996), the Director of the 47th Venice Biennale (1997), and the Artistic Supervisor for “Genova 2004, European Capital of Culture”. Most recently, he was the Curator of the exhibition Arts&Foods. Rituals from 1851 in the Expo 2015’s Art Pavillion at The Triennale, Milan and in 2016 the Project Director of The Floating Piers, Christo and Jeanne- Claude work at Lago d’Iseo.