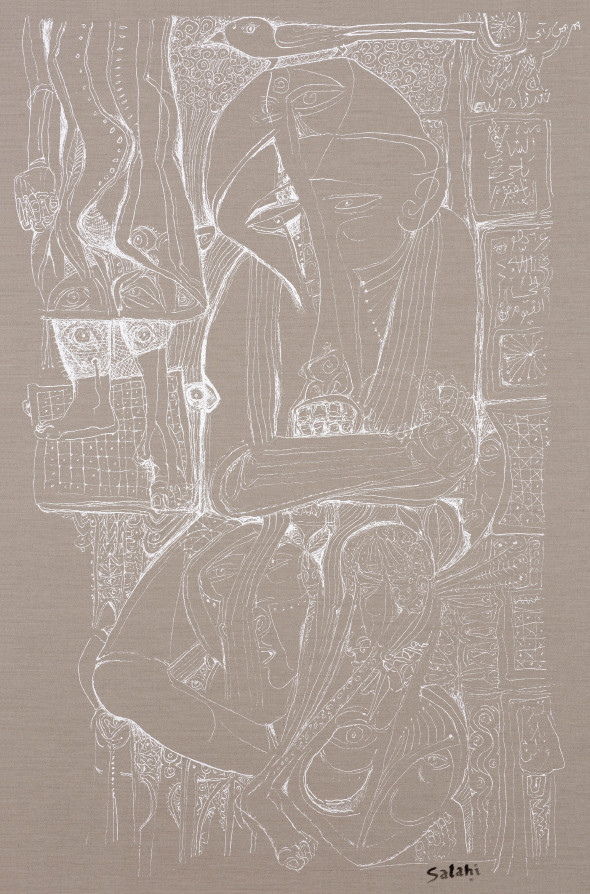 When Ibrahim El-Salahi is drawing he becomes lost in his work and has temporary respite from his sciatica and chronic back pain. For the last two years he has created an extraordinary body of work from the comfort of an armchair, refusing to let physical restriction limit his ambition, making around 180 tiny but incredible drawings in pen and ink on the backs of medicine packets, scraps of paper and envelopes.

Despite his physical restrictions, he still wished to communicate in an expanded format, using these drawings as a source or nucleus, pressing paint through a gauze onto strong woven linen canvas many times over until a thick inky texture was achieved, amplifying the character of the marks. Limited by his ailments, this method allowed him to do something that otherwise would not have been possible.

Throughout his career Ibrahim has returned again and again to the nucleus versus the whole and the organic opening up of an image. When in prison in the 1970s he drew on small scraps of cement casings, which he would join together while the guards were not watching. Thereafter all his black and white works were expansive in nature, whether starting with the nucleus and adding pieces of paper, letting the work grow organically, or in series within notebooks.

As far back as the 1950s Ibrahim was thinking how to engage people’s attention. Hence his first forays into what became known as the School of Khartoum. Disappointed by the lack of attention from his fellow countrymen and women when he showed his Slade work at the Grand Hotel in Khartoum in the late 1950s, he noted that if he wrote something in Arabic calligraphy on the drawings it attracted interest and people paused to look and read. The words and letters slowly then evolved as he began an exploration of the pictorial qualities and hidden shapes within calligraphic forms. It was a practical means to an end, a way into the work for the audience. The Pain Relief imagery includes a nod to these early works, with the artist making use of the pictorial possibilities of the braille on the medicine packets.

This body of work, made despite and because of circumstance, serves as a record of memory and contemporary experience fused with ambition to communicate.

Since completion of this project the artist has been inspired, re-entering his new studio for the first time in over two years—every day.

Biography
Born in Sudan in 1930, Ibrahim El-Salahi is one of the most important living African artists and a key figure in the development of African Modernism. El-Salahi grew up in Omdurman, Sudan and studied at the Slade School in London. On his return to Sudan in 1957, he established a new visual vocabulary, which arose from his own pioneering integration of Sudanese, Islamic, African, Arab and Western artistic traditions. In 2013, Ibrahim El-Salahi became the first artist of African birth to be given a full retrospective at Tate Modern. His work is included in the permanent collections of the Museum of Modern Art, New York; The Metropolitan Museum of Art, New York; The Art Institute of Chicago; The National Museum of African Art, Smithsonian Institution, Washington DC; The British Museum, London; Tate Modern, London; The Guggenheim Abu Dhabi, UAE; The Ashmolean Museum, Oxford; Newark Museum, Newark; Sharjah Art Foundation, Sharjah; The National Gallery, Berlin and many others.