Hynek Martinec: Will and Representation

Hynek Martinec: Will and Representation


Parafin presents an exhibition of new works by Hynek Martinec. It is the artist’s third exhibition with the gallery and his first since his landmark solo show at the National Gallery in Prague in 2018. 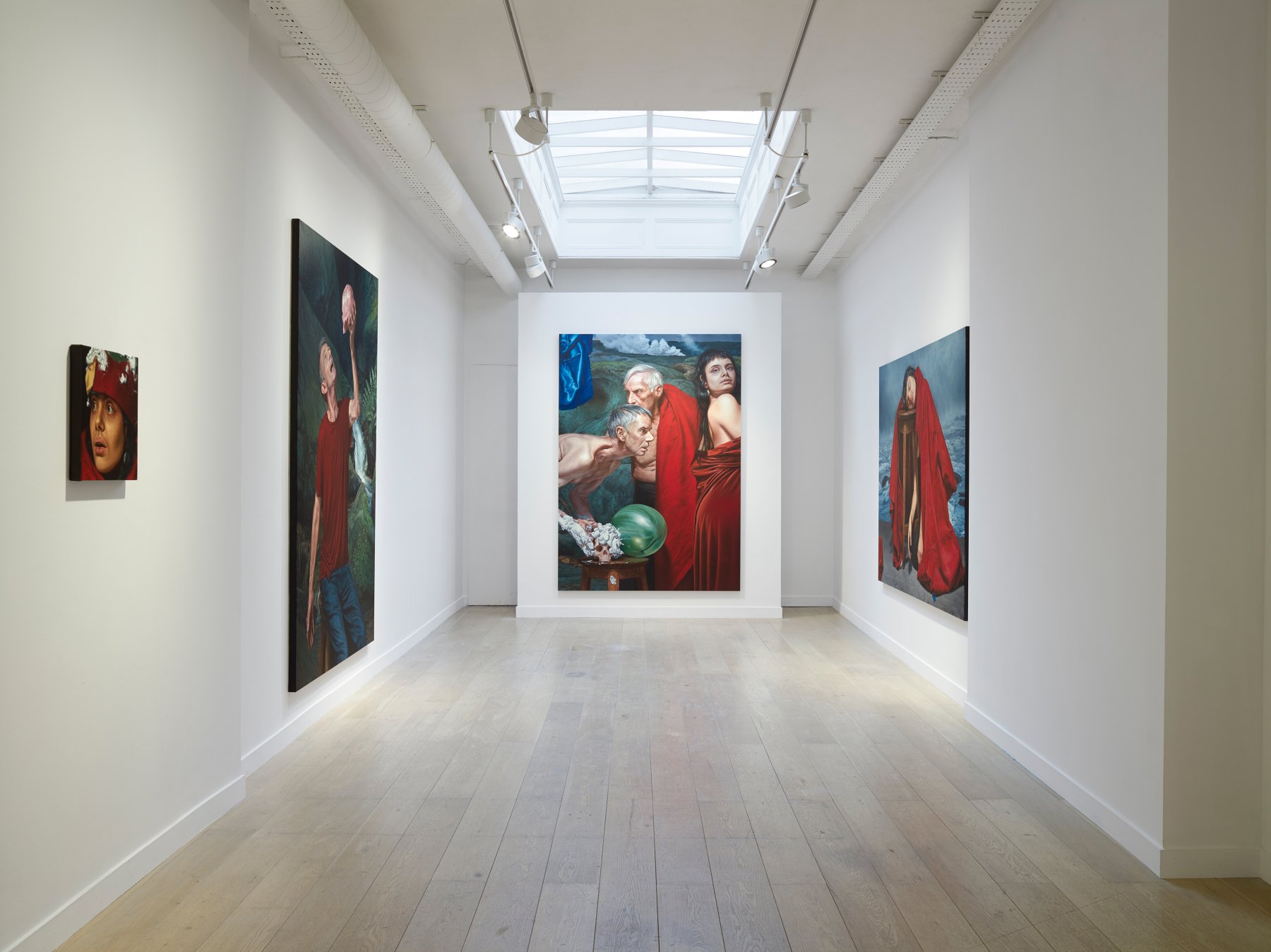 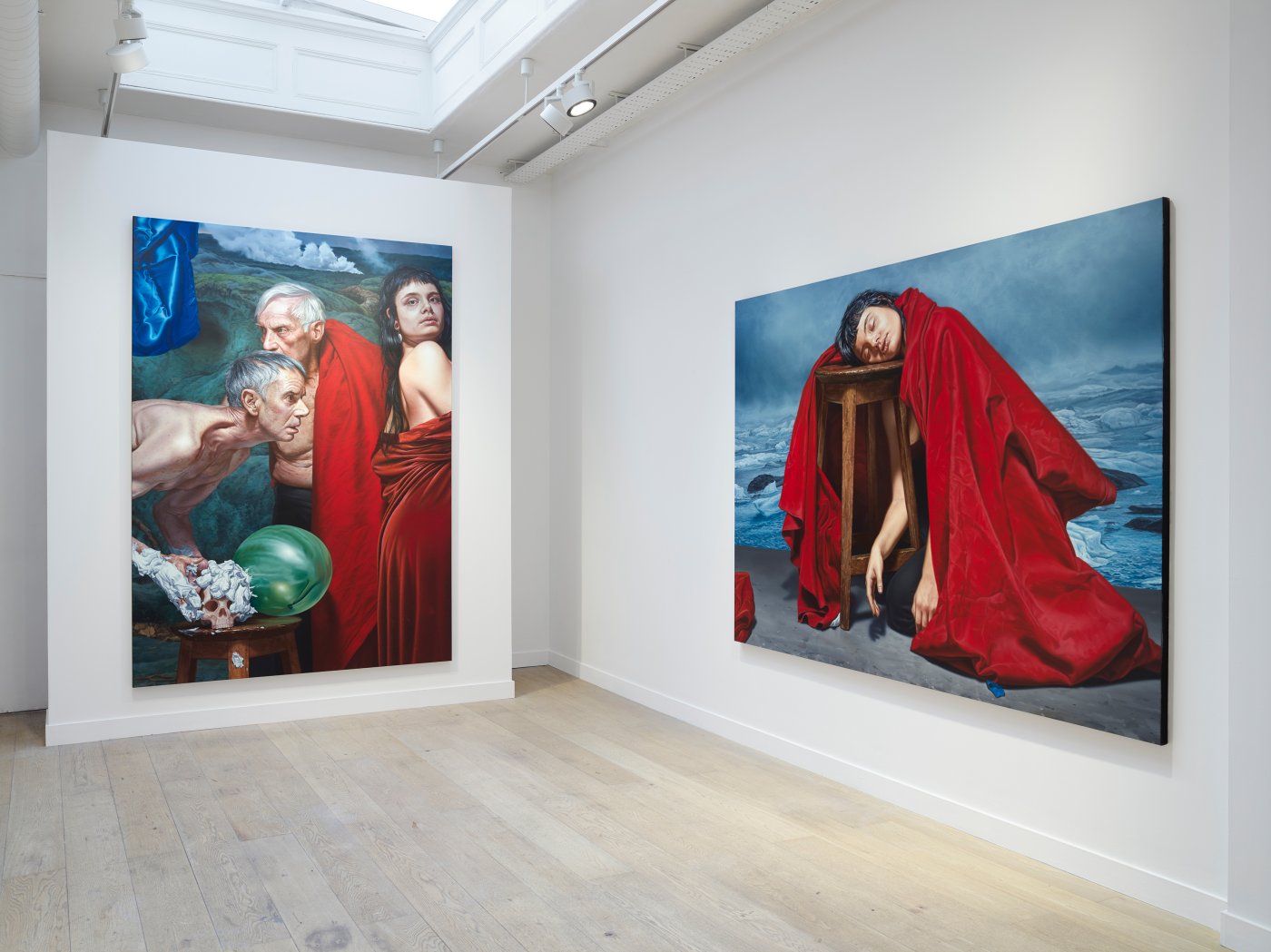 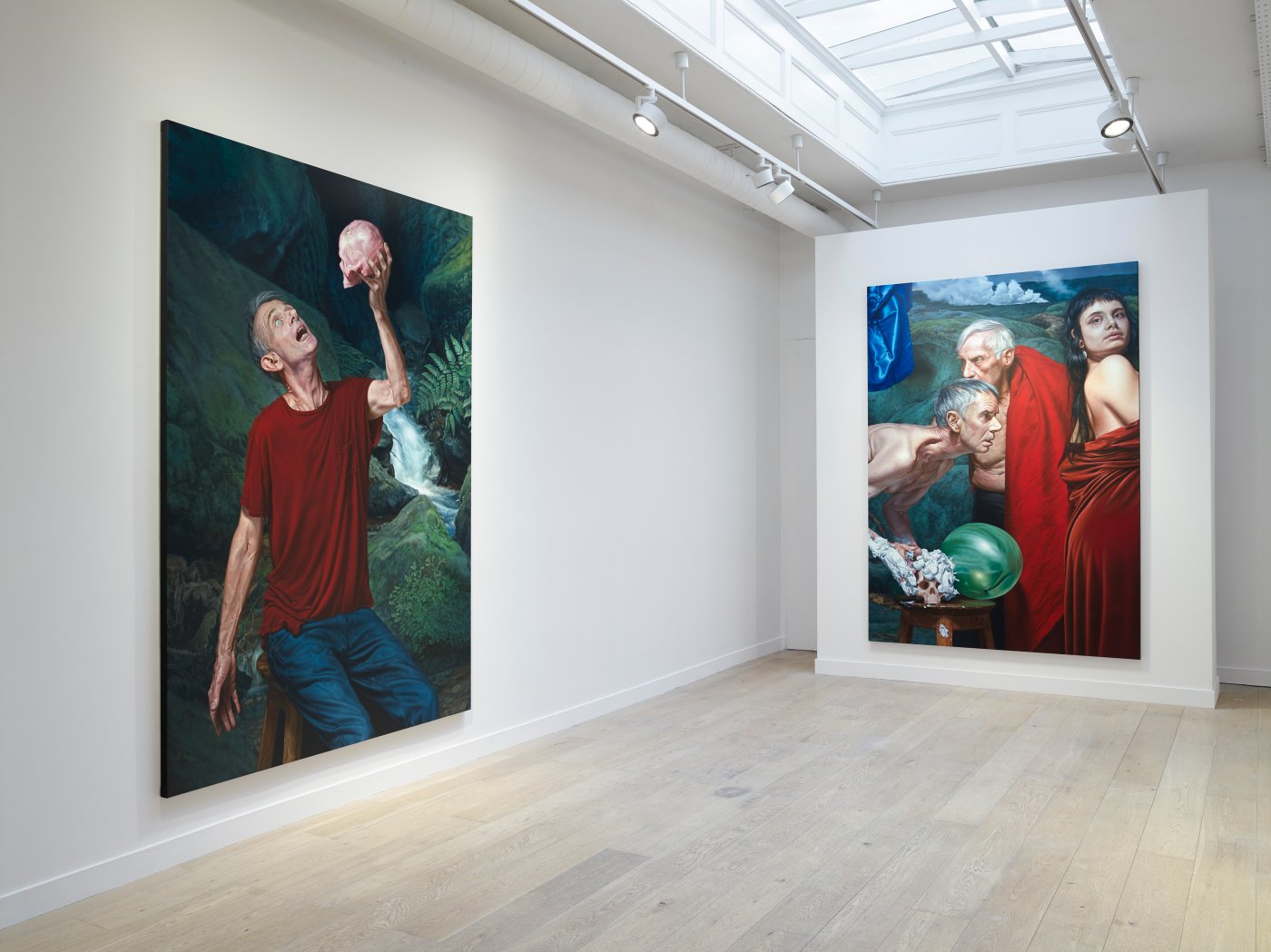 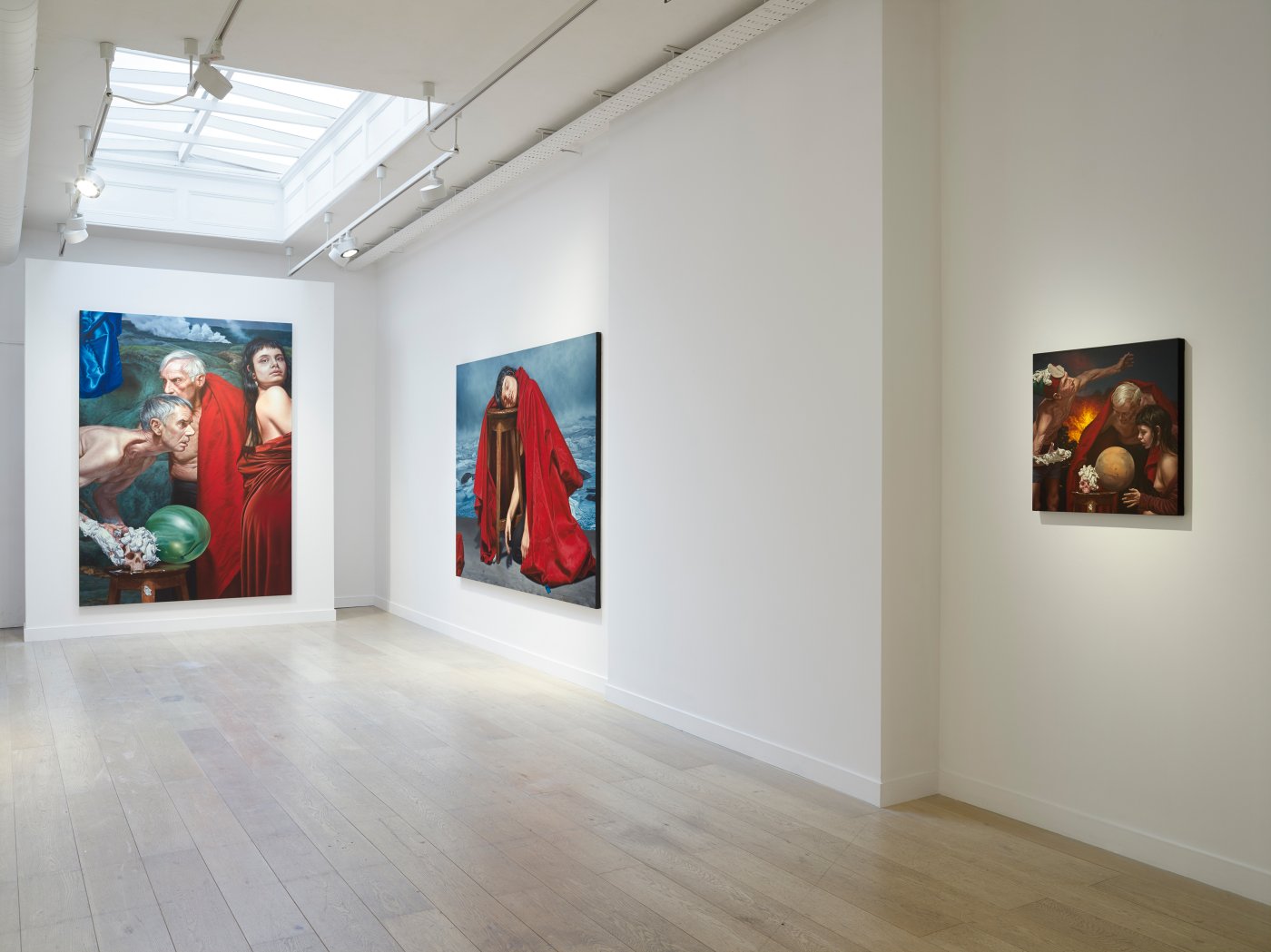 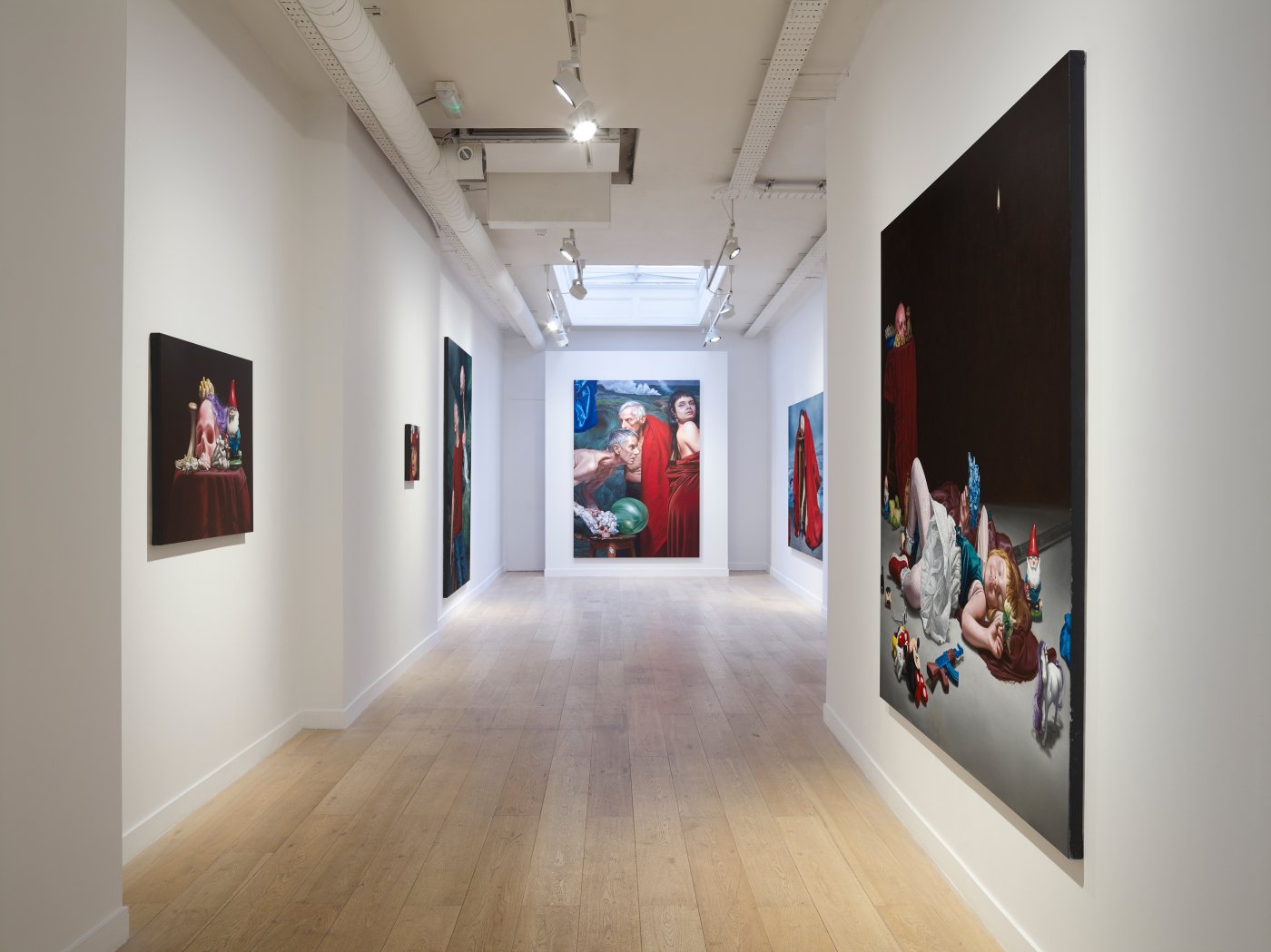 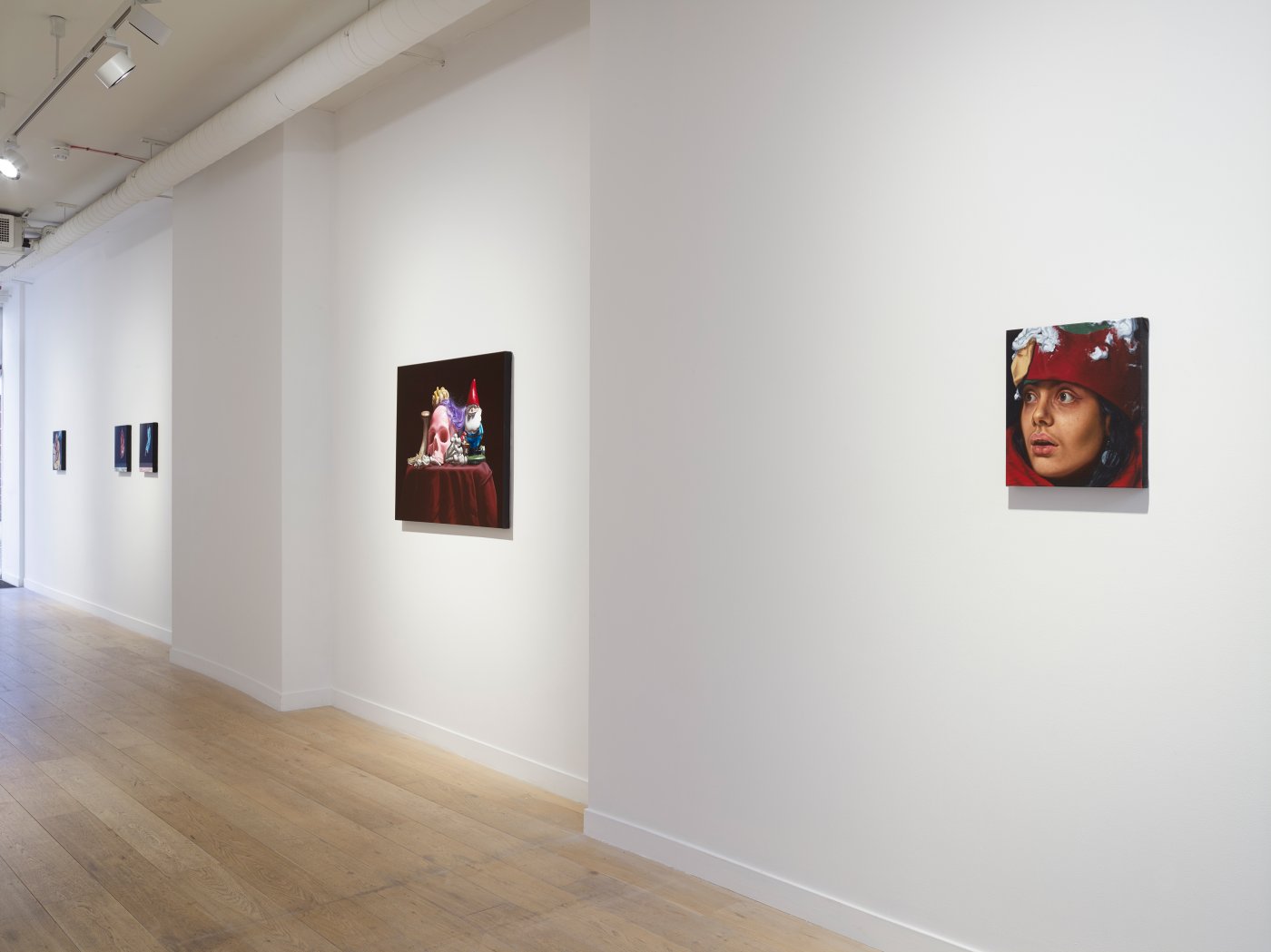 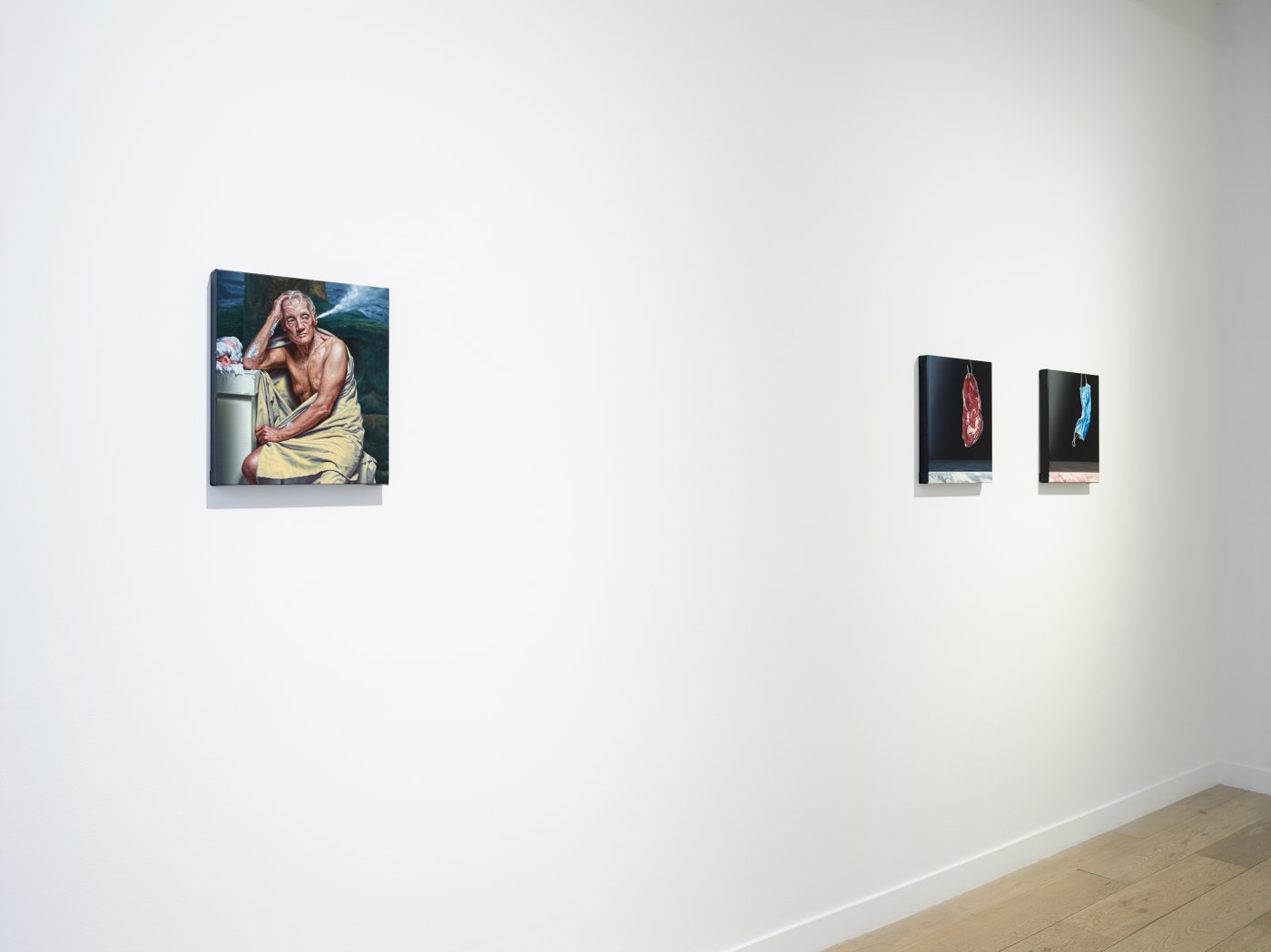 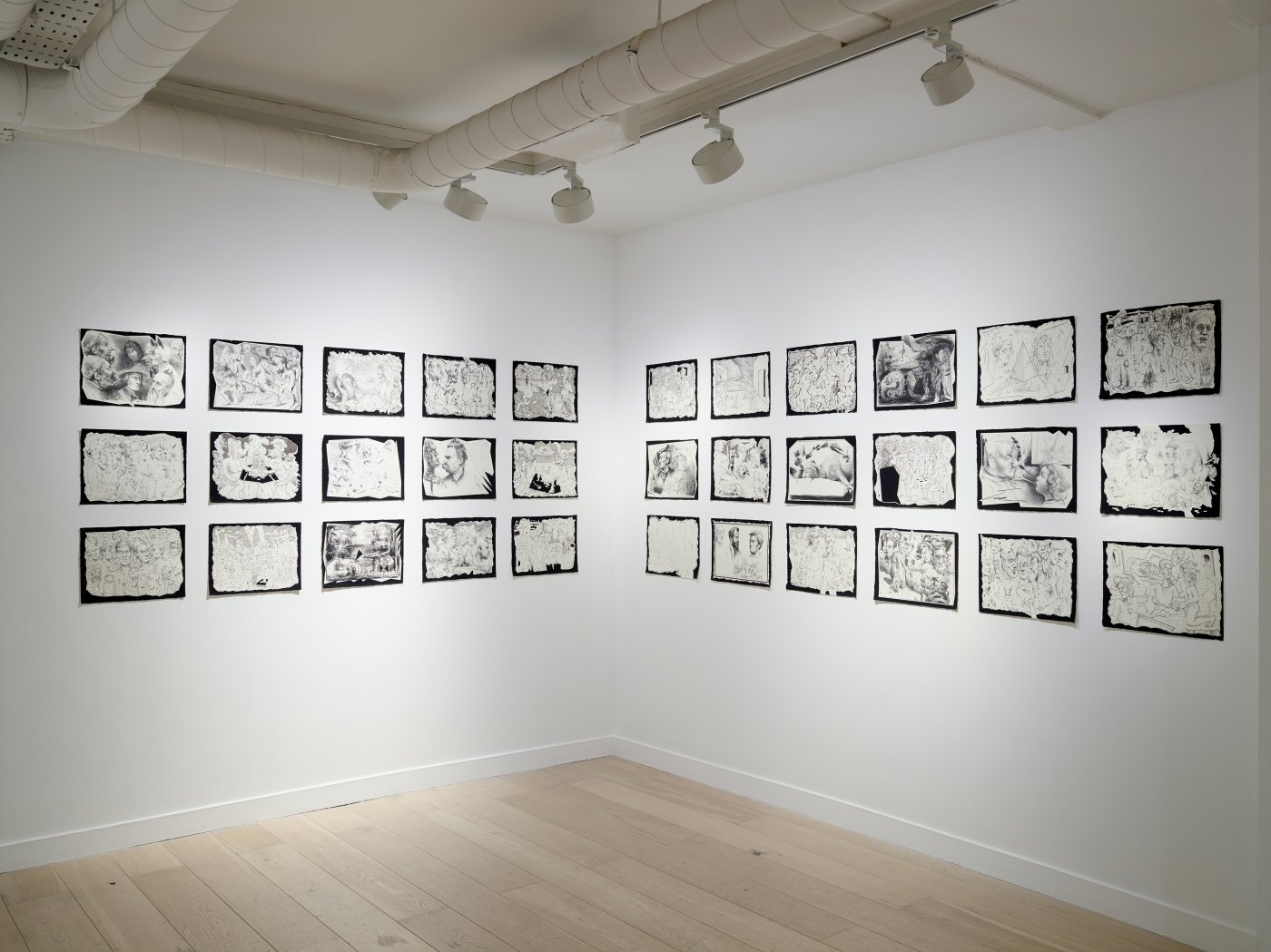 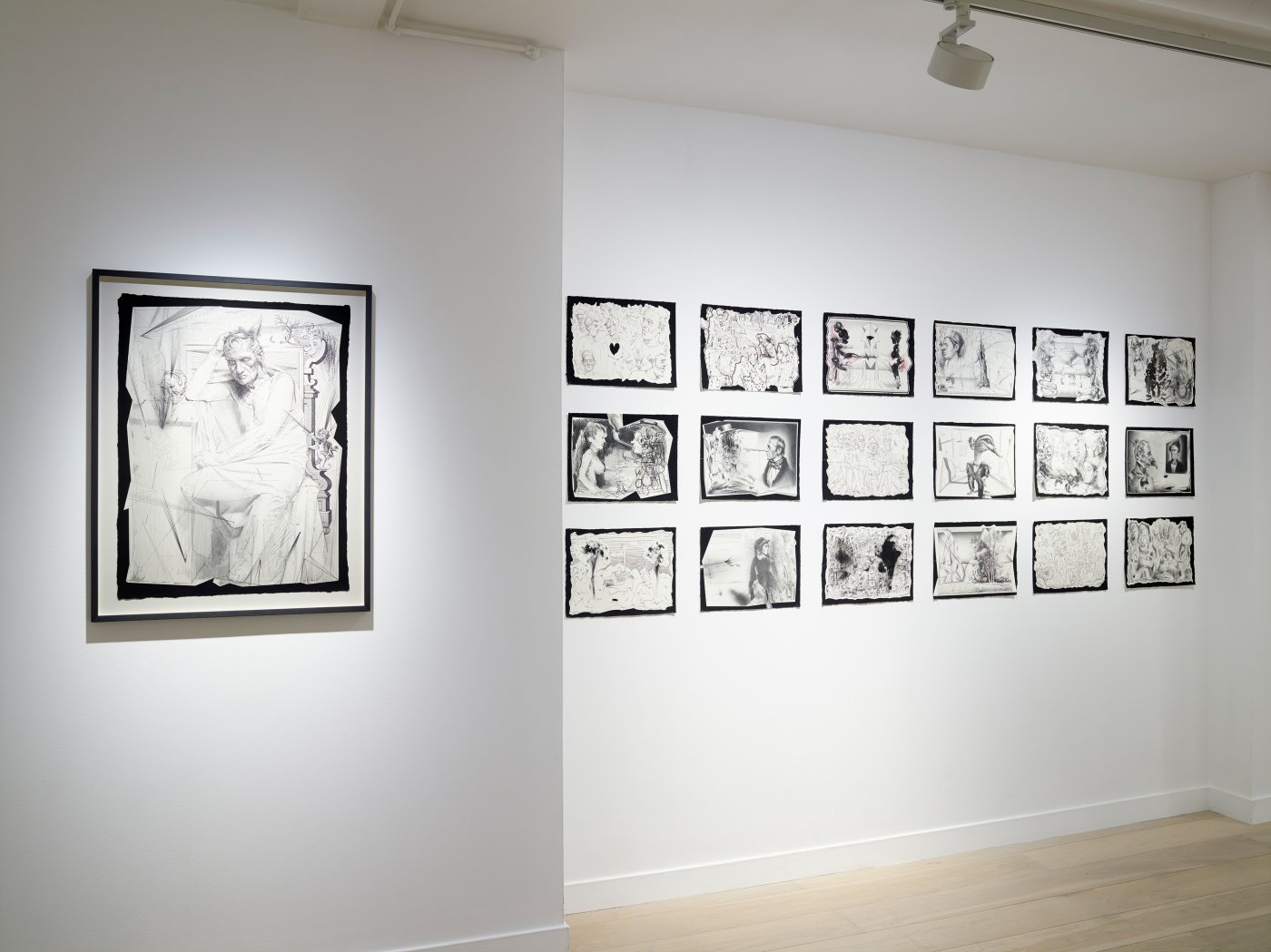 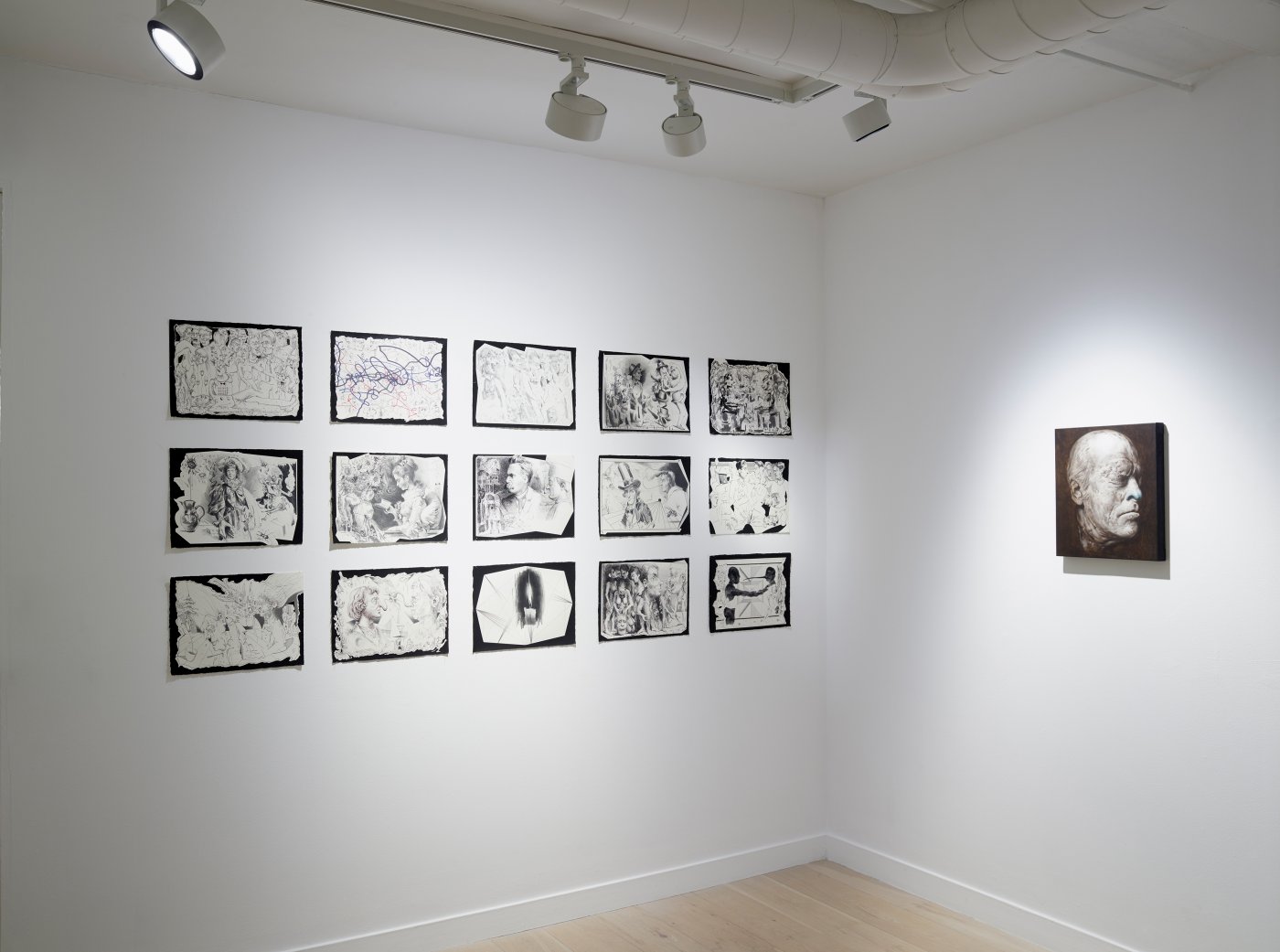 It is with parodic timing that Martinec draws our attention to Schopenhauer. By referencing ‘The World As Will And Representation’ (1818) – a pithy, disillusioning philosophy – Martinec is not attempting to align himself with the philosopher himself, or the other artists and writers in his wake but he is drawing our attention to an experience of disillusionment, a feeling that may be especially resonant now. This has set the scene for Martinec to borrow from Schopenhauer’s witty, negative perspective, considered to be so derisive it is almost optimistic.

In 2019 Martinec worked with live models, directing and photographing a series of tableaux which, during the pandemic, formed the basis for his new paintings. This exhibition introduces some significant developments within Martinec’s practice. While reflecting Martinec’s technical mastery and his ongoing use of photorealist techniques, in a striking formal development and in contrast to his first two exhibitions at the gallery, which featured monochrome and grisaille works, Martinec’s vibrant new paintings are rich with theatrical colour, satirical objects and individuals.

Martinec’s new works continue his fascination with his use of mythic stories and images from the past as tools with which to speak about the present moment. Saint Rosalia (2020) is titled for a saint who has historically been invoked in times of plague; Addressing this moment in time, Deepfake (2020) refers to a contemporary culture of fake or manipulated images; Don Quixote (2020) depicts the deluded Spanish nobleman in contemporary dress, both blind and apparently contemplating a pink skull – actually a wax candle; Tristan and Isolde (2021), after Wagner’s opera where Isolde chooses to submit to death rather than departing from Tristan. Taken together these works seem to portray a world in which reality is unreliable and untenable.

A pink skull recurs in a number of the works in the exhibition, becoming an uncanny leitmotif for both mortality and unreality. You Will Bury Me (2021), which is the most recent work in the show, is an image of innocence and will. It depicts a young girl lying with her eyes closed in bliss as she daydreams amidst her toys, which range jarringly from a unicorn to a gun; nearby, a pink skull sits on a table, a classic memento mori defamiliarised by its puce colouration.

In addition to the new paintings, in Parafin’s lower gallery Martinec will for the first time create an installation titled ‘The Dance of Dreams’, in reference to Holbein’s satirical series ‘The Dance of Death’ (1523-26) after the late-medieval allegory danse macabre. He maintains a daily practice of recording his dreams from the night before. Striving to reach the unconscious mind, he questions whether we really can consider the human will as our one window to the world behind the representation.

The exhibition will be accompanied by a fully illustrated catalogue featuring a new text by Tom Morton.

Courtesy of the artist and Parafin, London. Photography by Peter Mallet