Over the last three years Hurvin Anderson has focused his attention on a particular subject – or ‘image’ as he refers to it – a hotel complex on the north coast of Jamaica which he visited on a trip to the country of his heritage. Reverb , spanning both spaces at Thomas Dane Gallery is the first time the artist will present works exclusively from this series, and offers a unique insight into one of Anderson’s most arresting cycles of paintings to date. 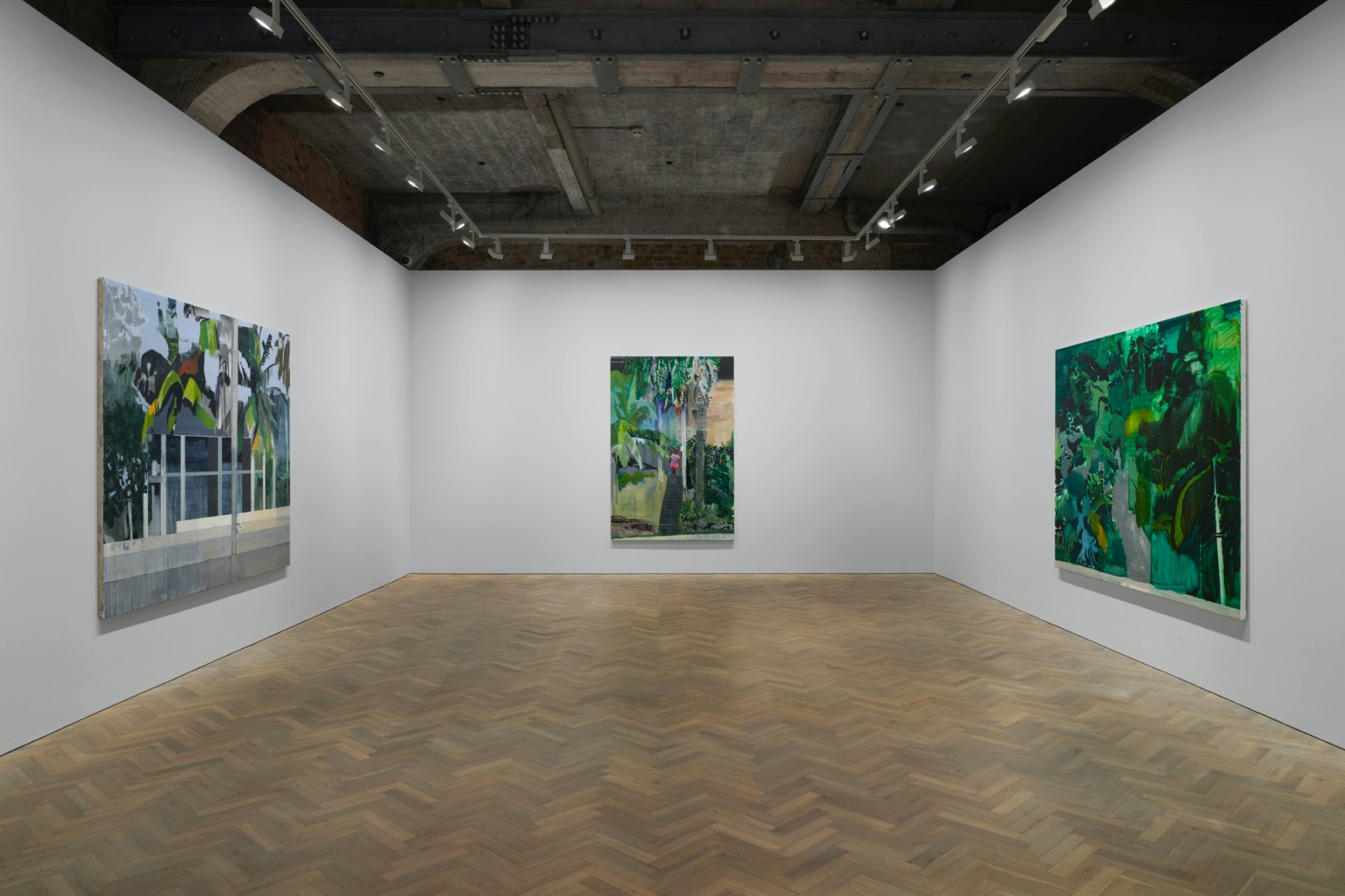 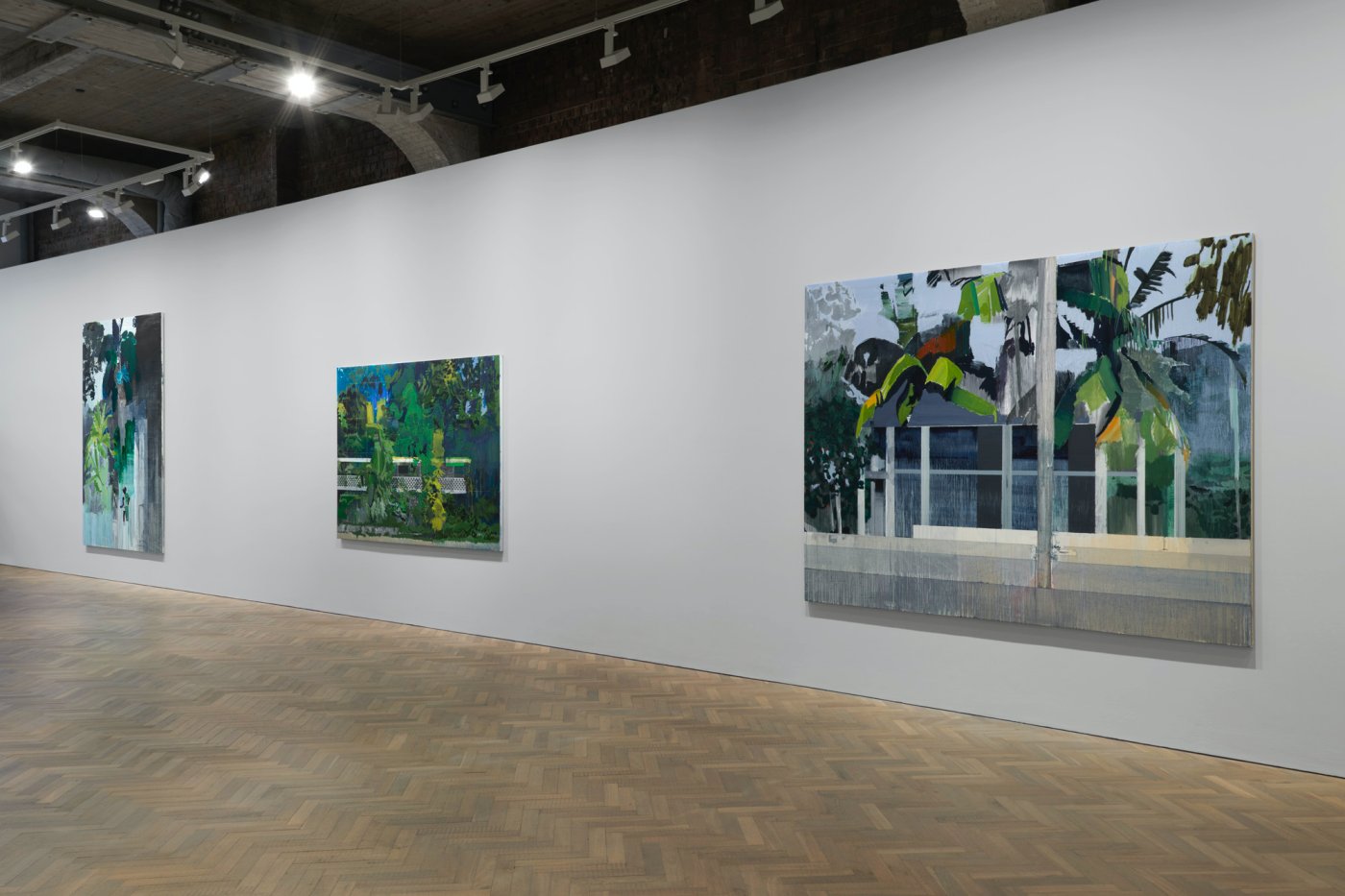 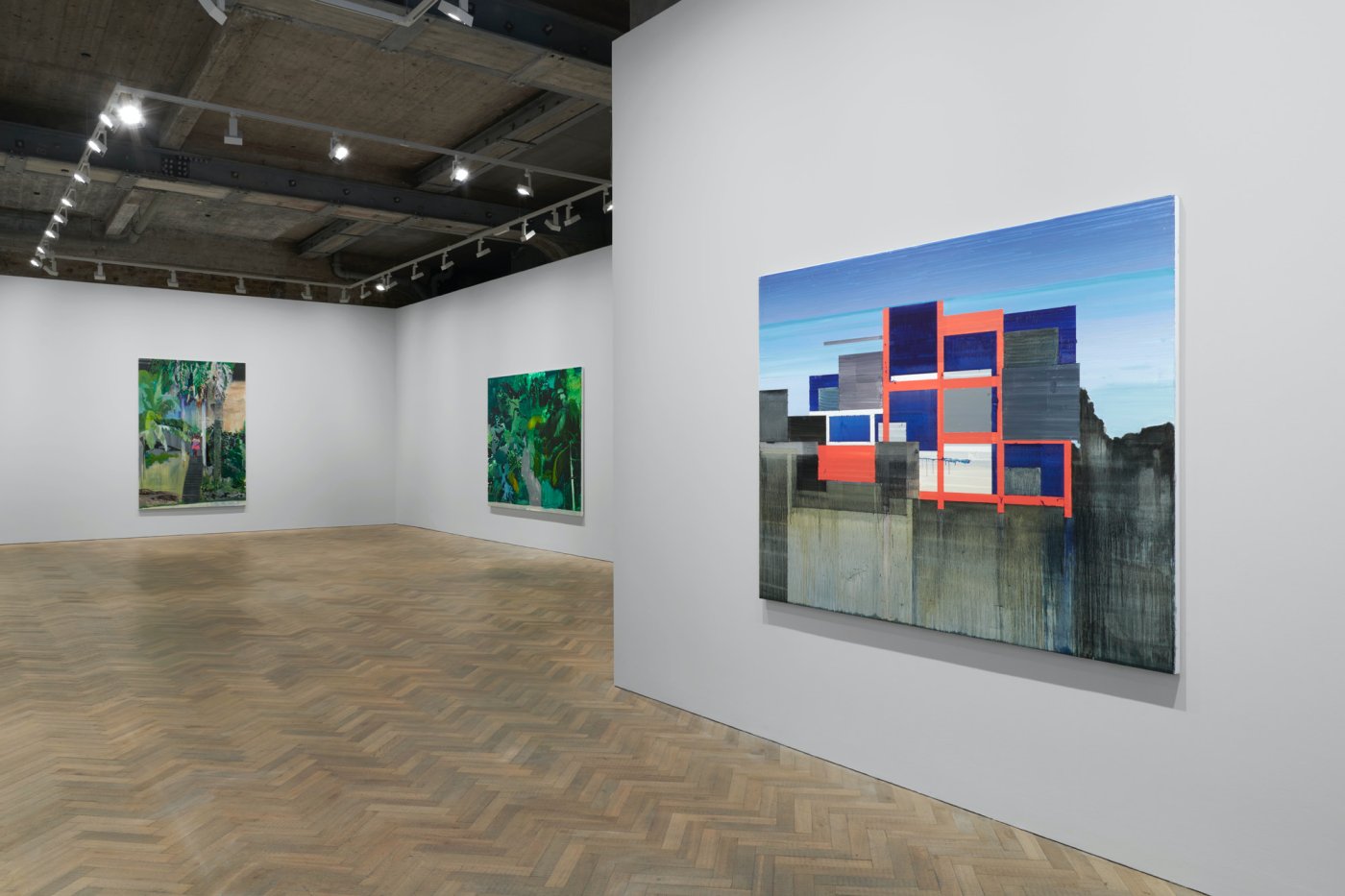 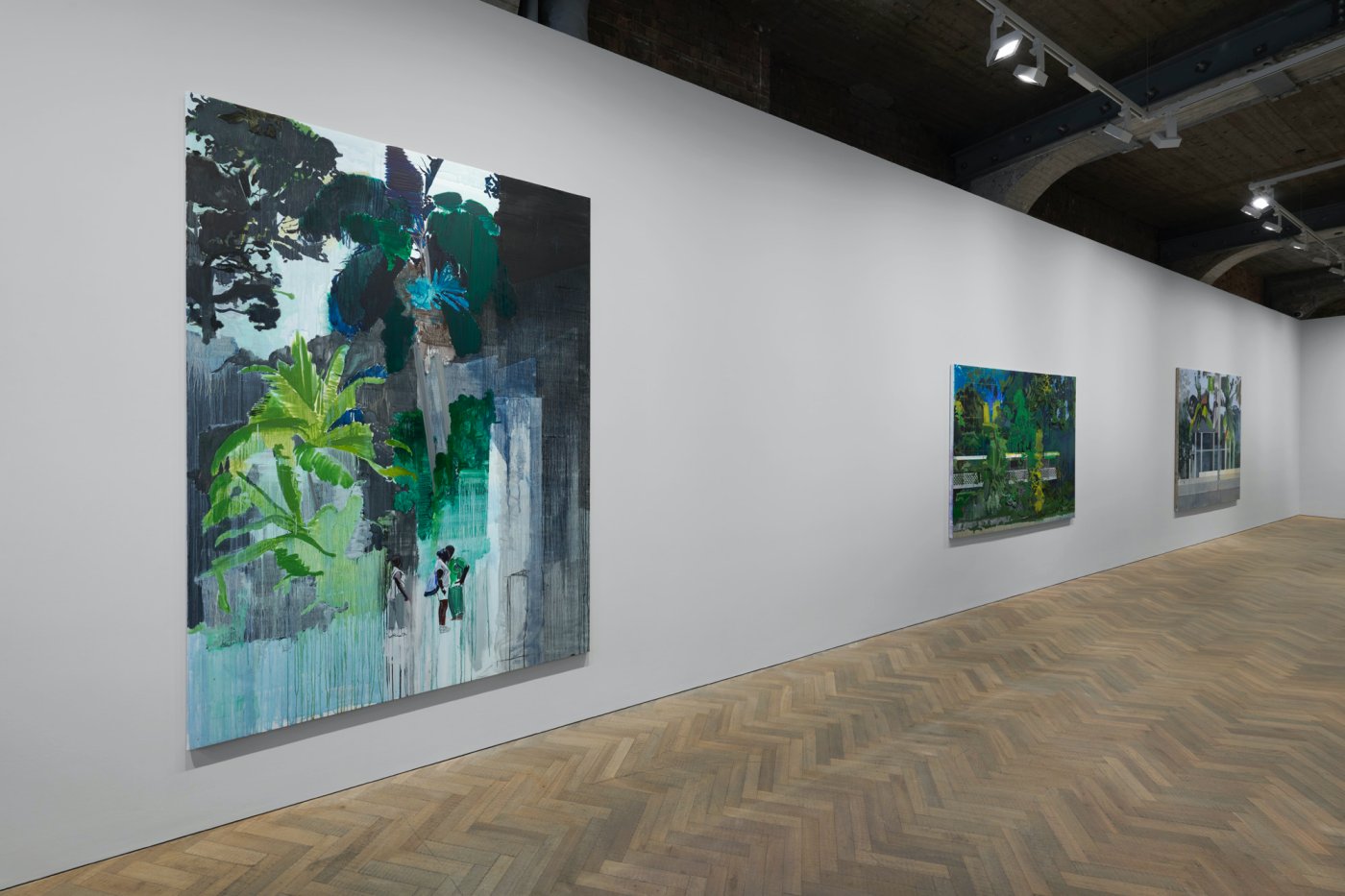 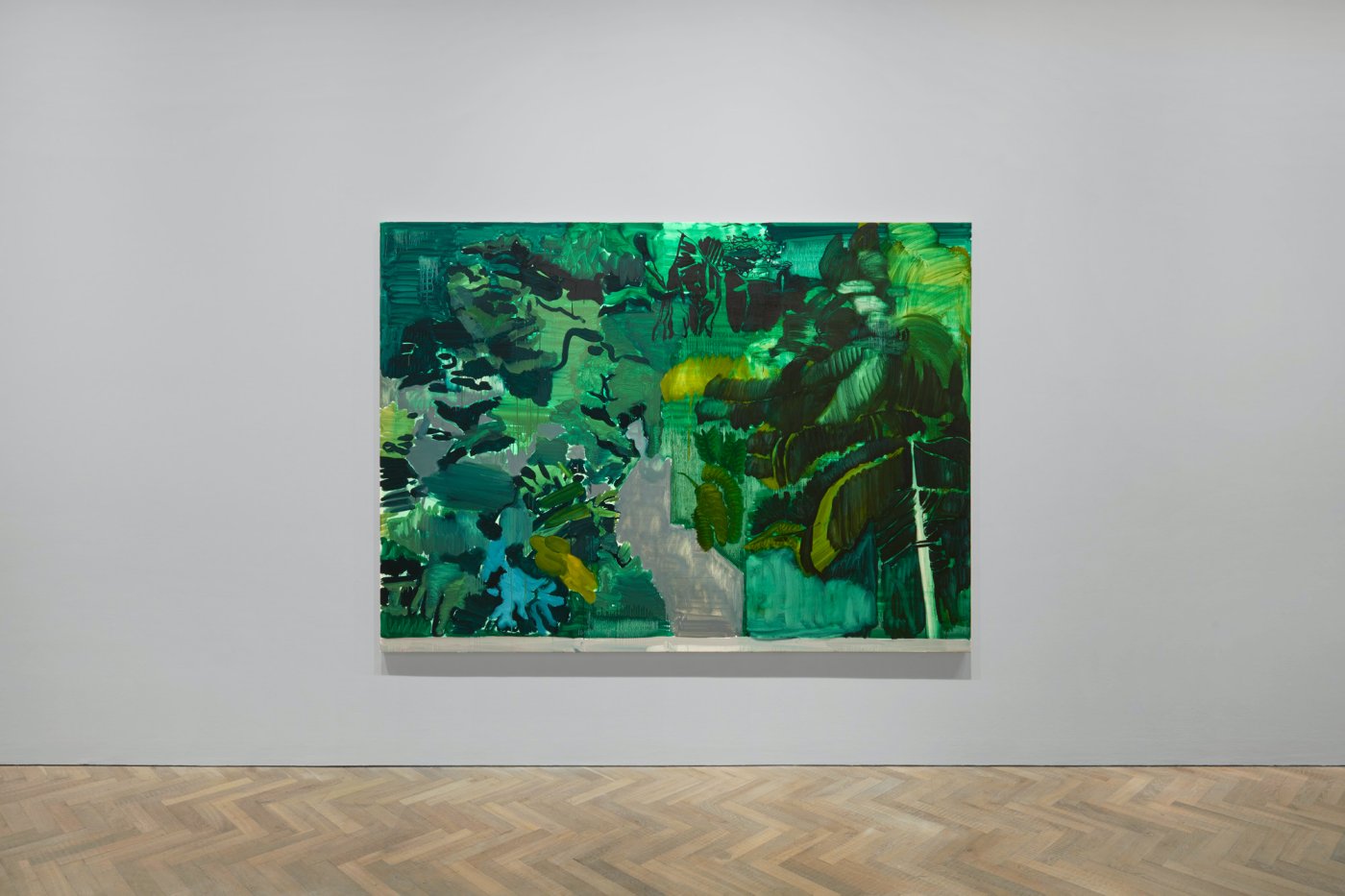 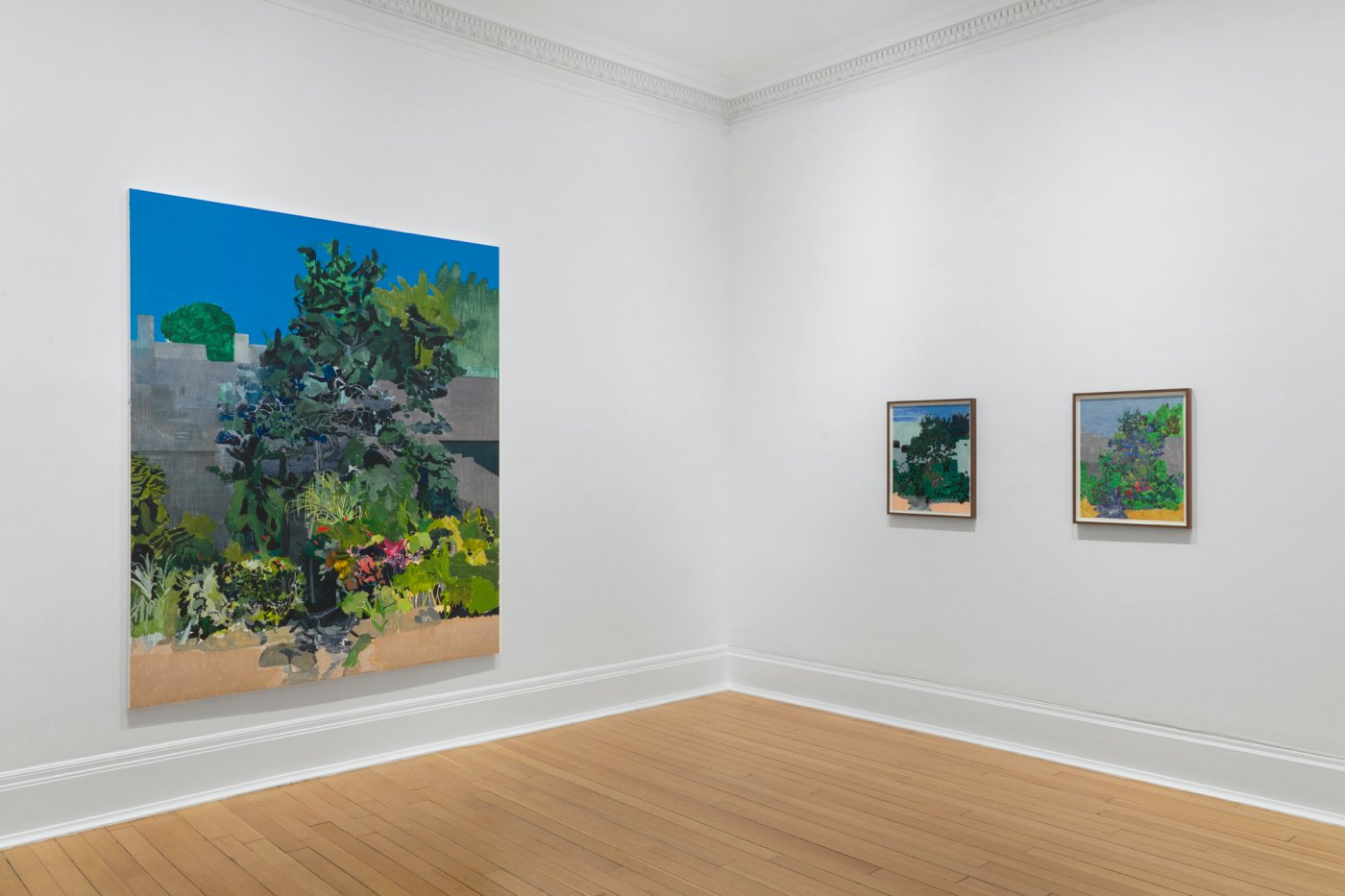 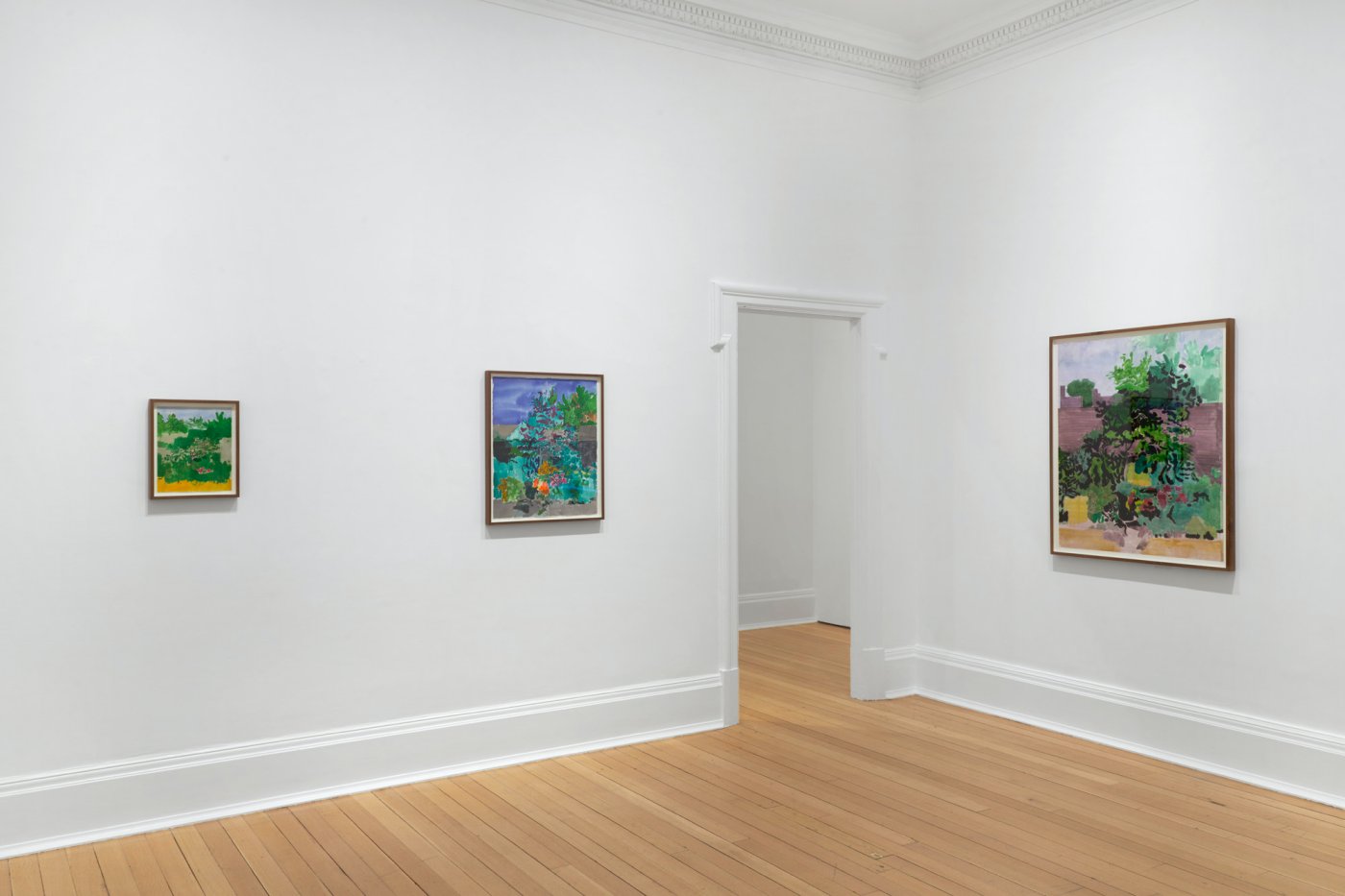 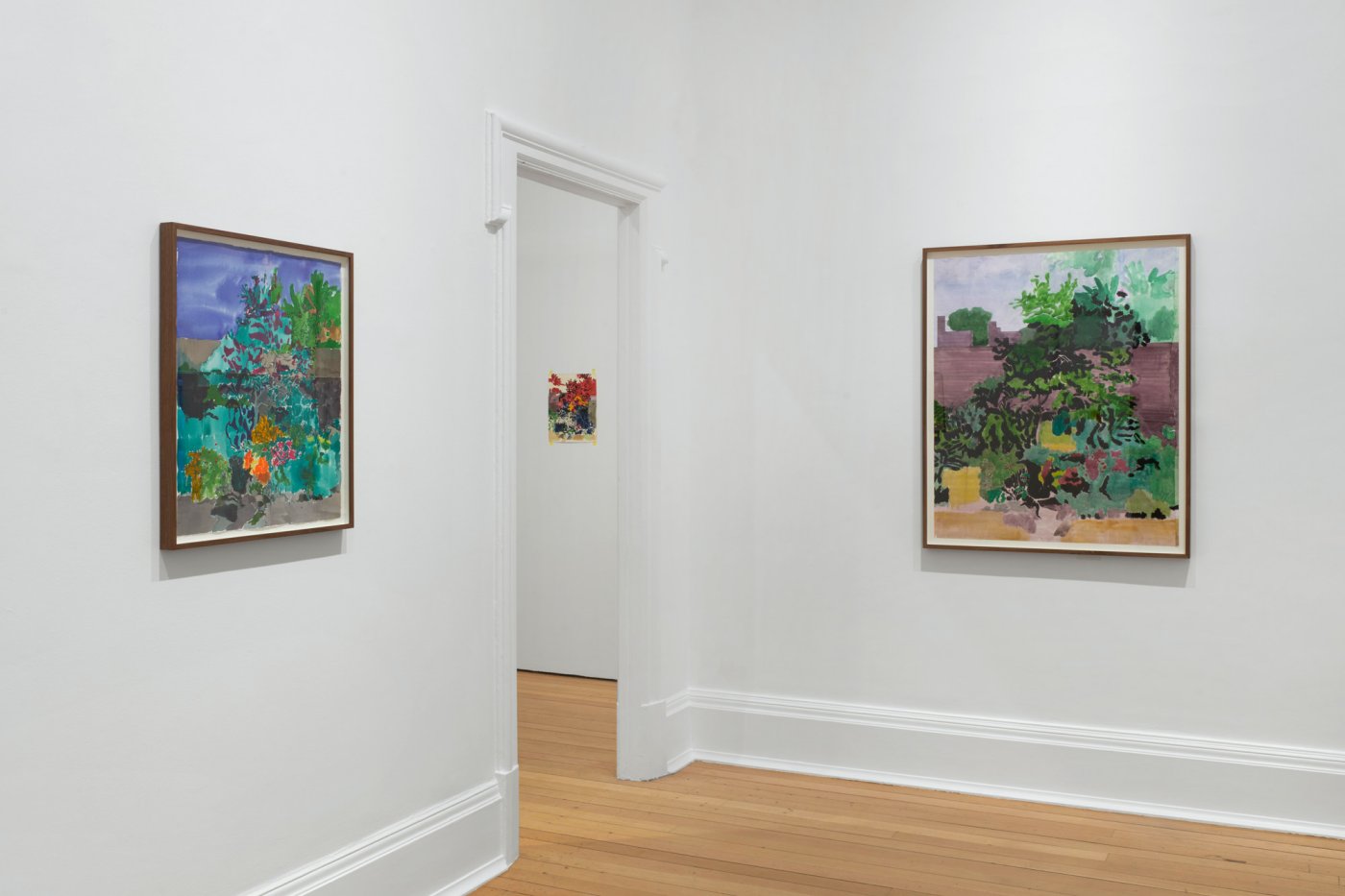 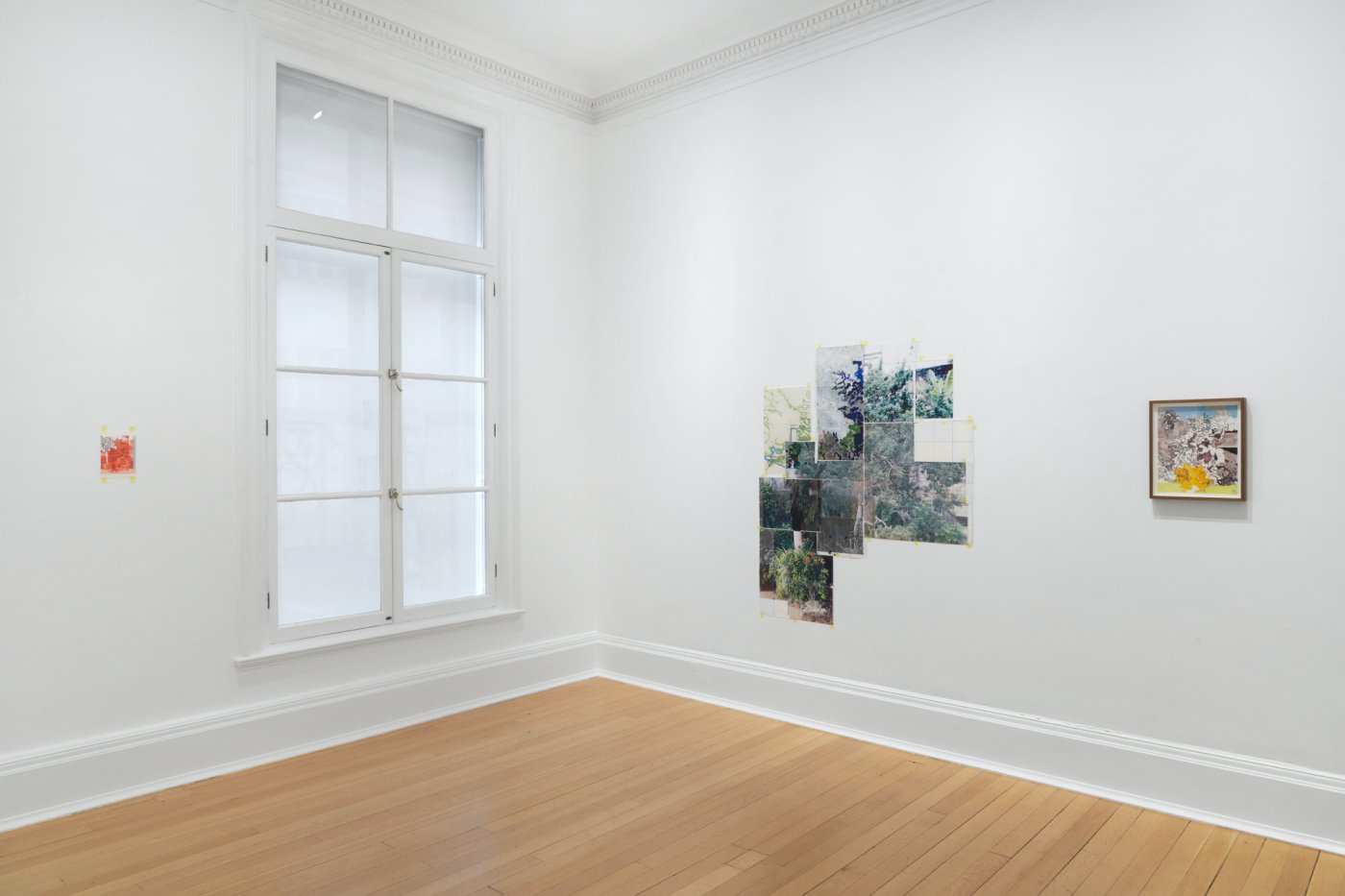 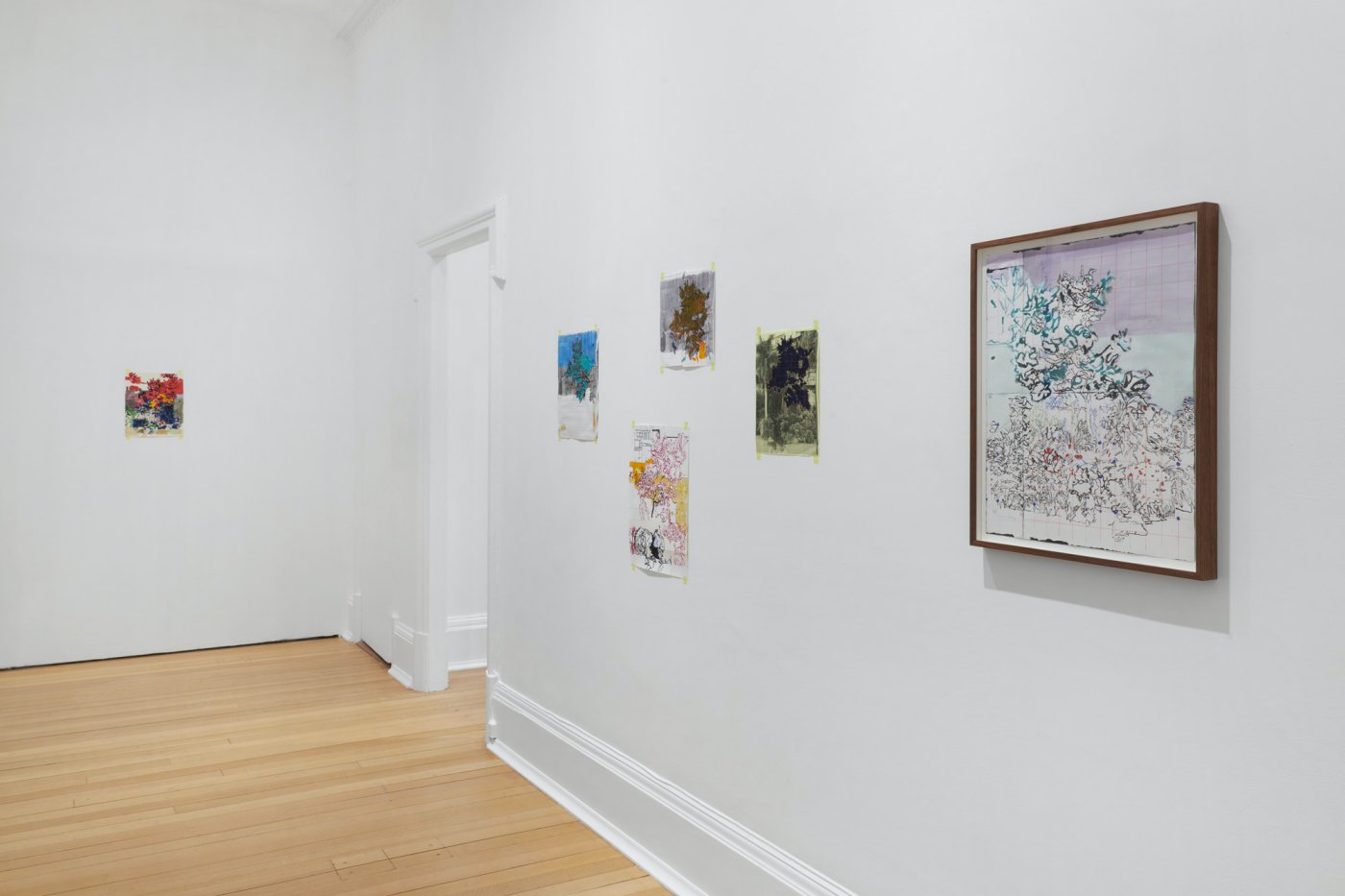 As often with Anderson the legibility and clarity of the scenes he presents is left ambiguous and open-ended. Is the hotel derelict and slowly being taken over by vegetation, or is paradisiac nature losing the battle against the concrete ruins? Anderson likes to entertain and draw upon that ambiguity: he calls it his ‘no-man’s land – where structure and clarity intermingle with looseness and fluidity.

Anderson almost never sketches while in the landscape, but instead takes photographs and works from these as well as from memory. Whether he focuses his attention on more intimate interior scenes of barbershops, or more elegiac landscapes, his methods and thinking are the same. He will study every plant, analyse every architectural pattern, research every brand of hair product, until he understands how they are made, how they are structured, and how they can be depicted.

This method of ‘rehearsing’ which Anderson shares with other painters, has perhaps never been as apparent as in his ‘Jungle Garden’ paintings – a focus in itself within the Jamaican Hotel Series . Here the process becomes even more deeply analytical. It is not so much that he wants to learn a painting and make more of them, but rather, make the picture again and again, in order to know it more and more.

Anderson has worked throughout his career on a singularly small number of such images. As if he was experimenting with a musical note or chord – tweaking and amplifying it, scrutinising the ripple effects of the reverbs and trebles. He very similarly and painstakingly works and reworks his images using a variety of methods and surfaces, framing and reframing the composition, saturating it in contrasting tonality and layering and erasing elements at ease. For instance, removing a palm tree which would have occupied the very centre of a picture, or a waterfall which flows in the midst of the building blocks. These very much still exist but as ghosts or mental images, giving the compositions their cryptic ethereal originality.

Sometimes ghosts quite literally (re)appear and populate the pictures, such as in Grace Jones (2020). Here the addition of memory, or perhaps an element of make-believe, brings forth an allusion to Marcel Duchamp or Gerhard Richter.

Commentaries in Anderson’s work, whether political or societal are always elegantly muted. In Reverb , an exhibition that seems to close a personal chapter and leave the door ajar onto another, Anderson comes the closest he ever has to an actual critique. On a certain loss of innocence, an impending ecological meltdown, and the consequences and excess of tourism and exploitation of nature. Beneath all this it also seems that Anderson alludes to a state of mental shift and musical drift, and perhaps, almost unconsciously, to the displacement of his family, global migrations and diaspora.

Hurvin Anderson was born in 1965 in Birmingham, where his Jamaican parents settled after immigrating to England. The origin of Anderson’s work often stems from his experience growing up within Birmingham’s African-Caribbean community and his time spent living in Trinidad as an artist-in-residence. Distilled from memory, his work investigates notions of identity, space and community, exploring the complexities of cultural influences and social histories.

Anderson’s compositions exist like a fleeting moment, visually characterised by a sense of temporality often depicted in his paintings. Working across a range of mediums including photography, sculpture, drawing though predominately painting, Anderson’s work is steeped in lush, vivid colours of the Caribbean and contrasted with urban, English landscapes. It is this ambivalent relationship that most effectively disrupts binaries of place, revealing how Anderson negotiates these cultural influences by reimagining his surroundings.