Howard Hodgkin: Strictly Personal is a retrospective survey of prints by Sir Howard Hodgkin (1932 – 2017) spanning six decades. Hodgkin made his first lithograph in 1953 and continued to make prints, in a variety of print mediums, until his death in 2017. This exhibition, held in collaboration with the artist’s estate, covers the full range of Hodgkin’s printmaking oeuvre and includes important examples from all the major series he made. 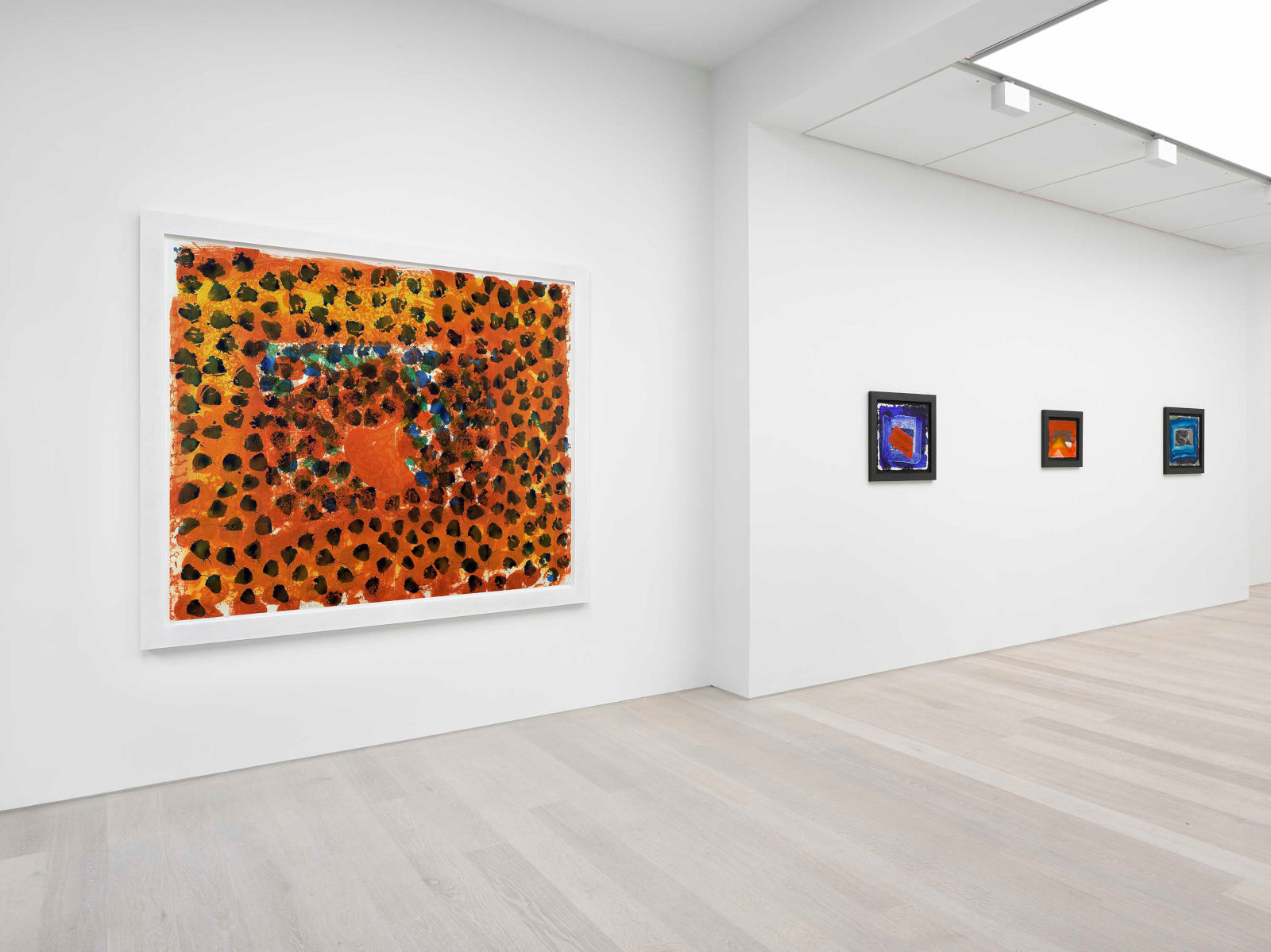 Alan Cristea gently fuelled Hodgkin’s ambitions over a thirty-year period and together they worked on over 120 prints. Hodgkin was the quintessential painter, but as time passed printmaking became a weapon in the artist’s armoury that equalled his achievements in painting. Howard Hodgkin: Strictly Personal is divided into two consecutive shows, each of which covers both floors of the gallery. Part I features prints made between 1966 and 2005 and Part II covers the period afterwards up to his death in 2017.

Although Hodgkin made his first print in 1953, as a 20-year-old student at the Bath Academy of Art in Corsham, he made relatively few in the first 25 years of his artistic career. These were either
lithographs or screenprints – the latter being the predominant medium for English artists of his generation. The works made from 1966 onwards give a fascinating insight into the major preoccupations of his oeuvre as a whole. One of these was his desire to conjure up the atmosphere and the emotions of social engagement within an intimate context, such as the series of interiors made from 1966 to 1968, a group of five lithographs, 5 Rooms, that show brightly coloured figures emerging from their settings.

In the late 1970s he turned his back on the surface qualities of screenprint and began to hand-colour his lithographs to better evoke the experiences and emotions life was beginning to offer him. Hand-coloured etchings also made their first appearance. Obvious figurative elements all but disappeared but vitality increased with hand-painting giving richness to the printed surface. This was the beginning of the hybrid labour intensive process which Hodgkin was to employ for the rest of his career. During this time Hodgkin began to work with some of the best printers in America and Europe, including Petersburg Press in New York and Aldo Crommelyck in Paris, who was responsible for so many of the most accomplished graphic works by Braque, Picasso and Matisse.

In 1986 Hodgkin made the acquaintance of master printer Jack Shireff who introduced him to carborundum printing, a method which allowed the artist to increase the emotional intensity of his printed work by adding texture and depth to his work. By introducing gritty silica compounds to the plate, Hodgkin was now able to apply colour directly with a brush, creating etchings with painterly effects, such as Red Palm and Black Monsoon, both executed in 1987.

“Howard’s prints became bigger and more complex from the late 1990s onwards and printmaking dominated his late career,” says Alan Cristea. “Through a highly personal hybrid fusion of printmaking and painting, an intaglio base of carborundum and aquatint accentuated and enlivened by hand-painted touches, Hodgkin threw out the printmaking rule book in the service of hard won spontaneity.”

Large scale editions including Street Palm, 1990-91 and Flowering Palm, 1990-91, were in part inspired by the large advertising posters which he saw in Parisian metro stations. Hodgkin filled the entire sheet with the fronds of a palm tree. His prints were becoming more physical. Venice Evening, 1995, described by Hodgkin as “on the edge of not being a print” is representative of the prints that were now often much larger than his paintings. The works from his Venetian Views series, which evoke the mood of different times of day in Venice, were inspired by Thomas Mann’s novel Death In Venice (1912).

The prints that Hodgkin produced in the final 15 years of his life convey a vitality, almost a wildness, only hinted at previously in some of his unique works. These late works often refer to memories and personal experiences. Green Thoughts, the series made in 2014, references Andrew Marvell’s seventeenth-century poem The Garden. Although Hodgkin resisted interpretation, the artist’s gestural marks, vibrant colours and evocative titles such as Storm Cloud, 2014, and Sundown, 2014, invite contemplation about encounters with nature. Acquainted with the Night, a series of twelve works made in Hodgkin’s eightieth year, was inspired by a Robert Frost poem of the same name. Seven of these works were executed on a large scale (measuring 174 x 244 cm), printed over several sheets of hinged, hand-torn paper.

The last series of editions that Hodgkin ever made, entitled After All, was completed several months before his death in March 2017. These works were the summation of the visual language that Hodgkin called “representational pictures of emotional situations.” Works from this series including Ice Cream, 2015-16, and Black Blush, 2015-16, are sure, deft, direct, and vital. These visual gestures have synaesthetic qualities; a colour that evokes a touch, a brush-mark that conjures up a taste or an aroma. The After All series hints at memories of England, days by the sea, the taste of an ice-cream on a summers’ day, the wind brushing clouds across the sky, and yet they remain unequivocally in the present.

Cristea Roberts Gallery is the official representative for the prints from the Estate of Howard Hodgkin.