Timothy Taylor presents Bourgeoisie in Bloom, a solo exhibition by Honor Titus (b. 1989, Brooklyn, NY), which follows the artist’s presentation with the gallery at Frieze London, 2021. Bourgeoisie in Bloom is accompanied by an illustrated catalogue with a foreword by artist Henry Taylor and an essay by critic Durga Chew-Bose. 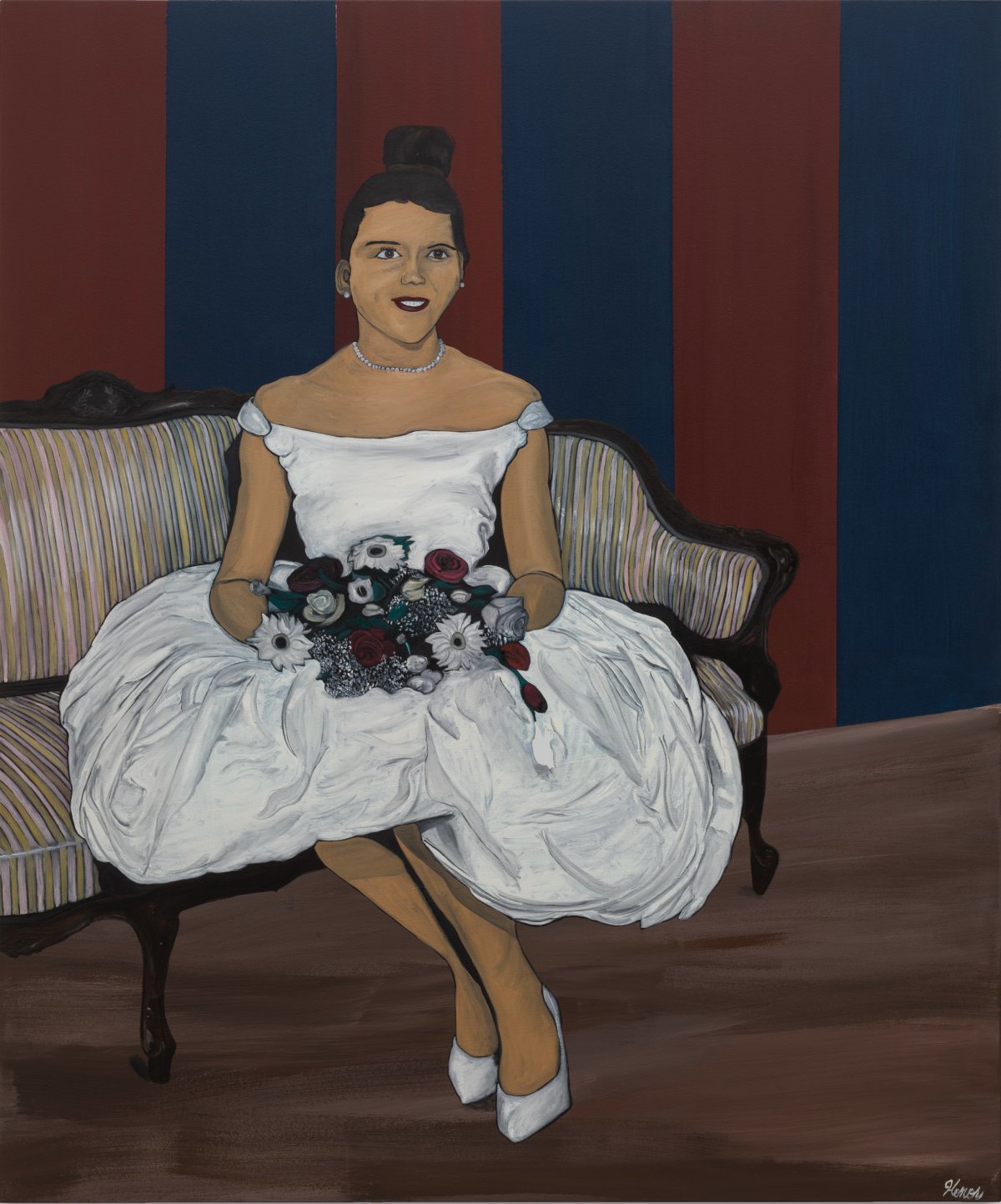 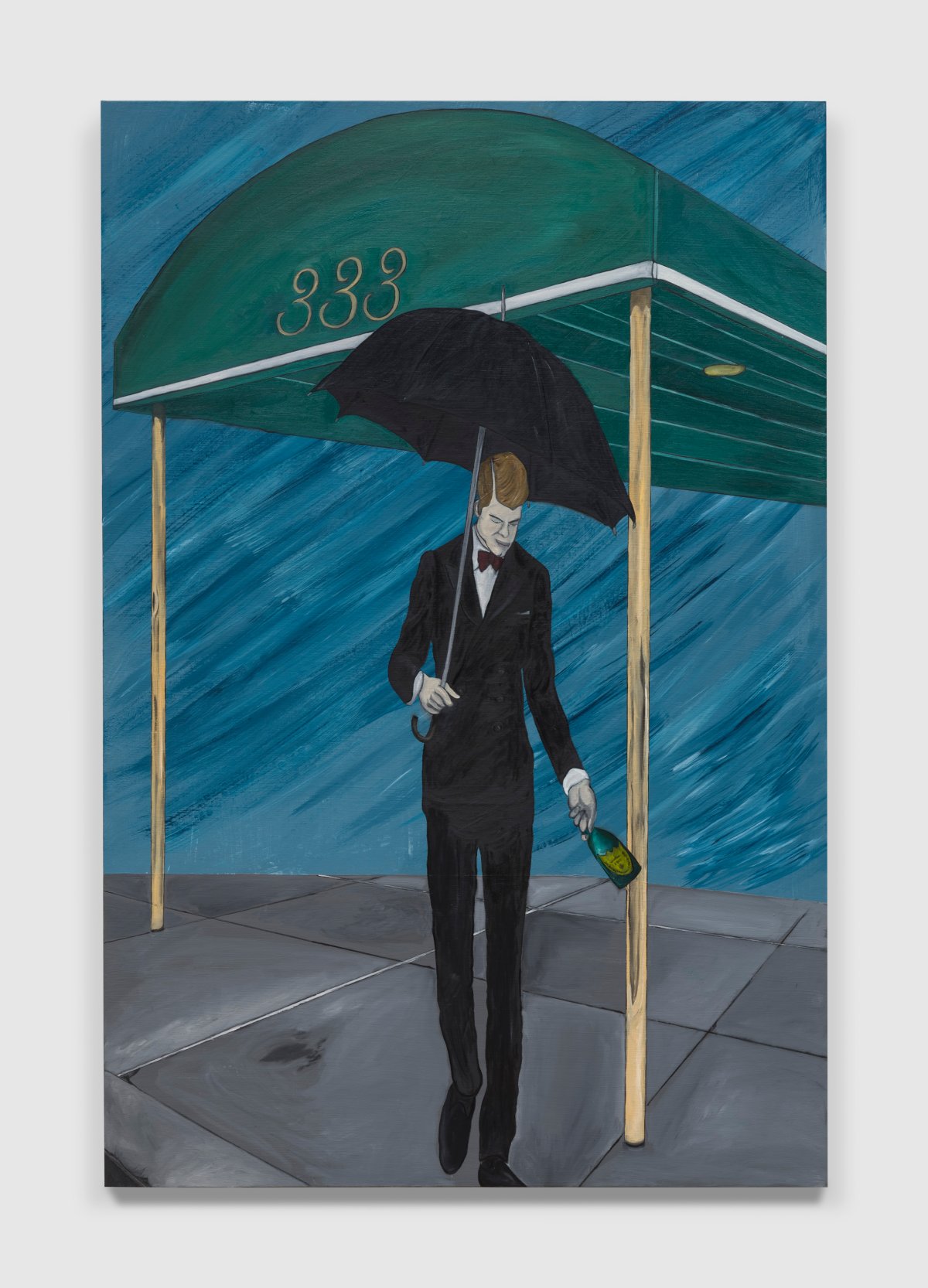 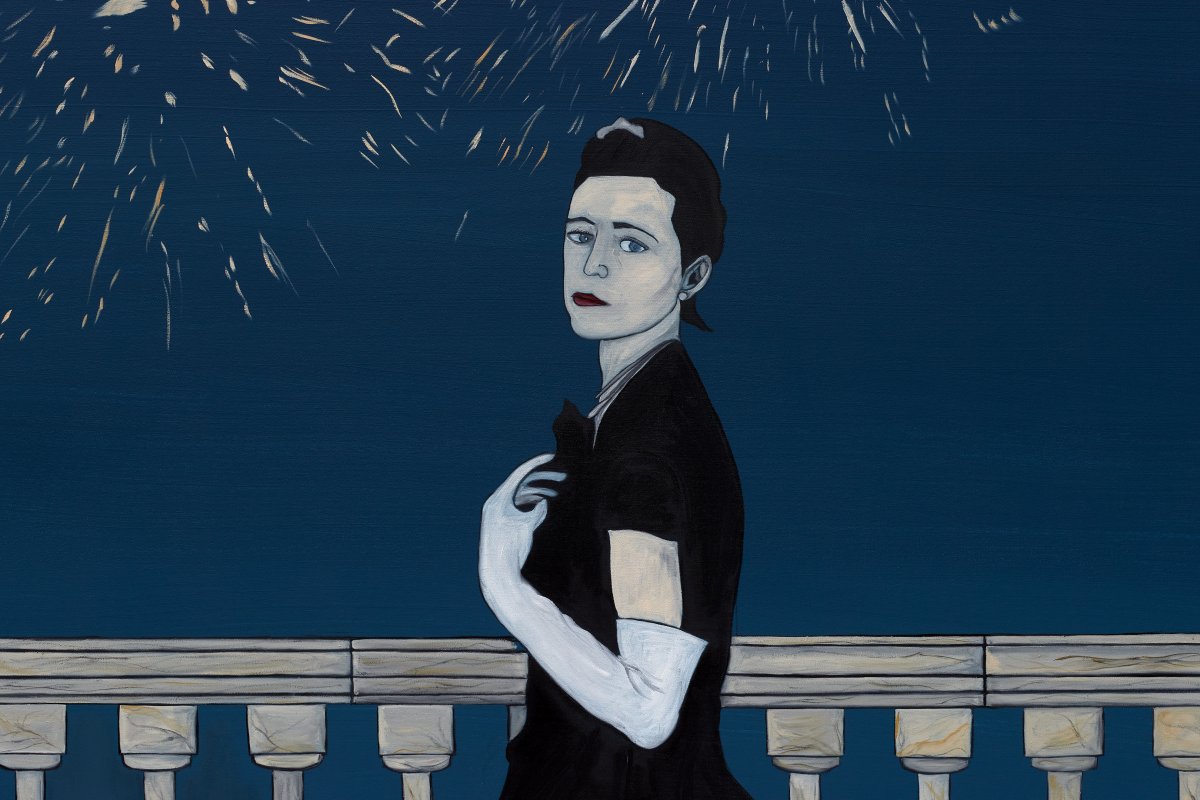 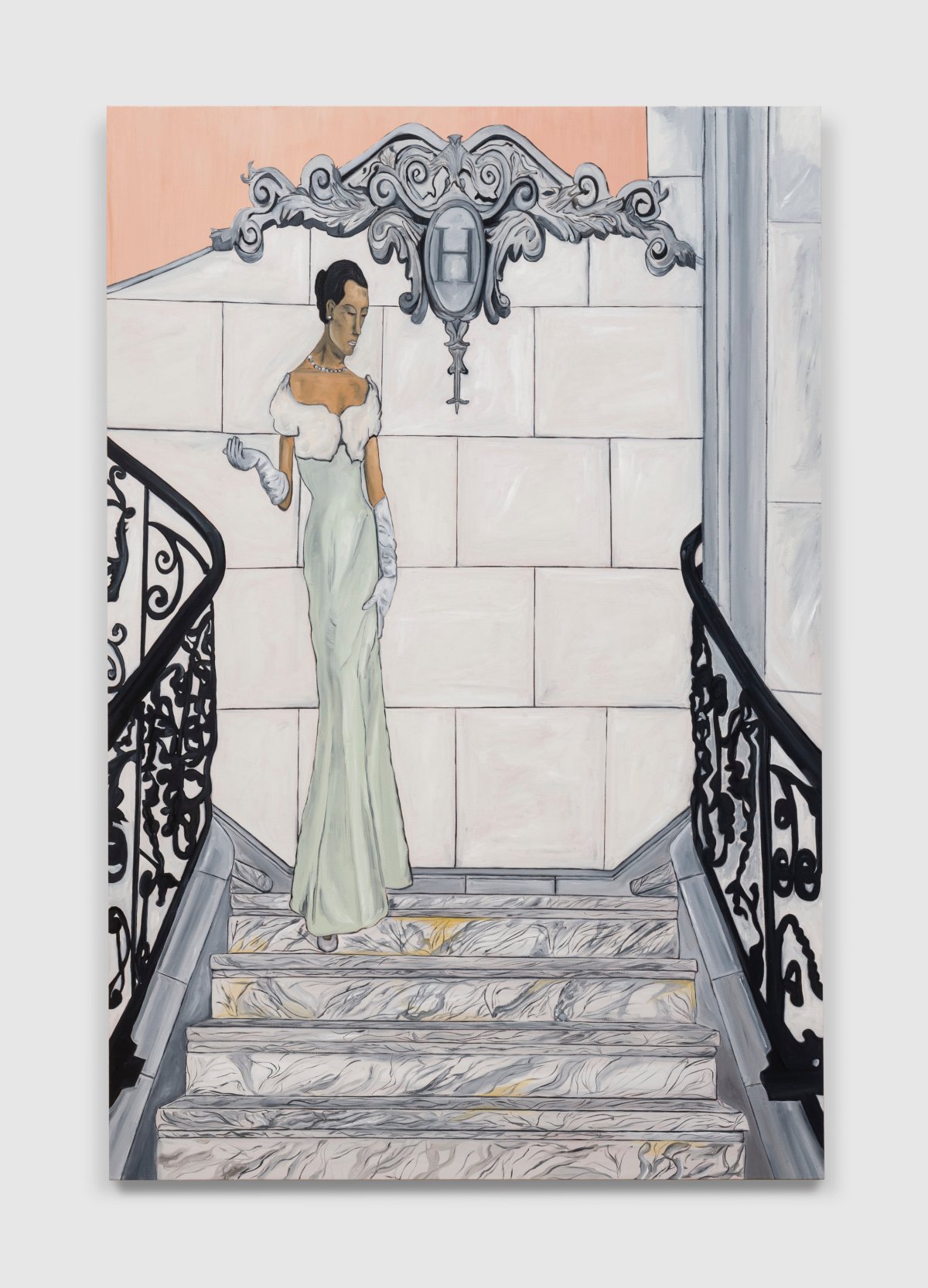 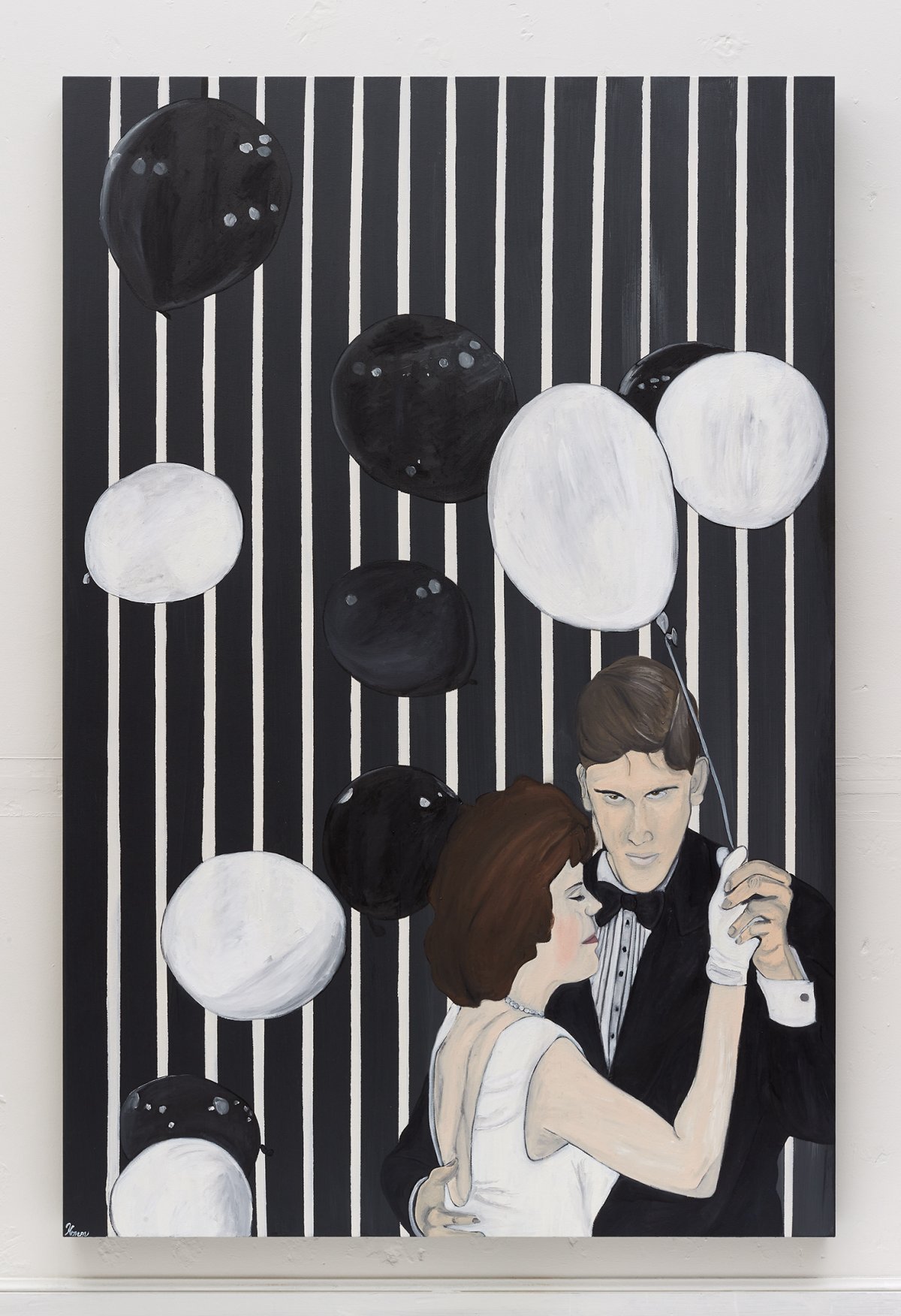 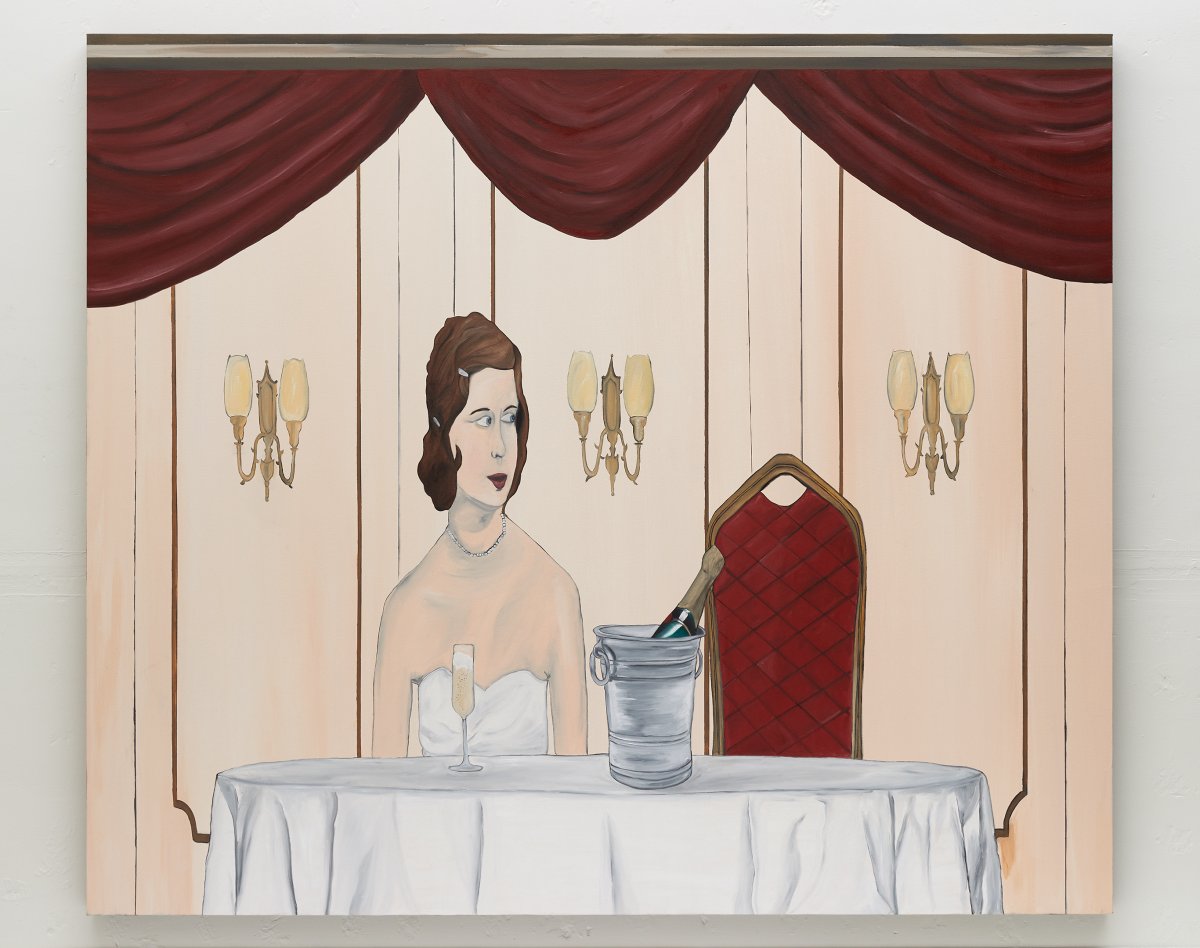 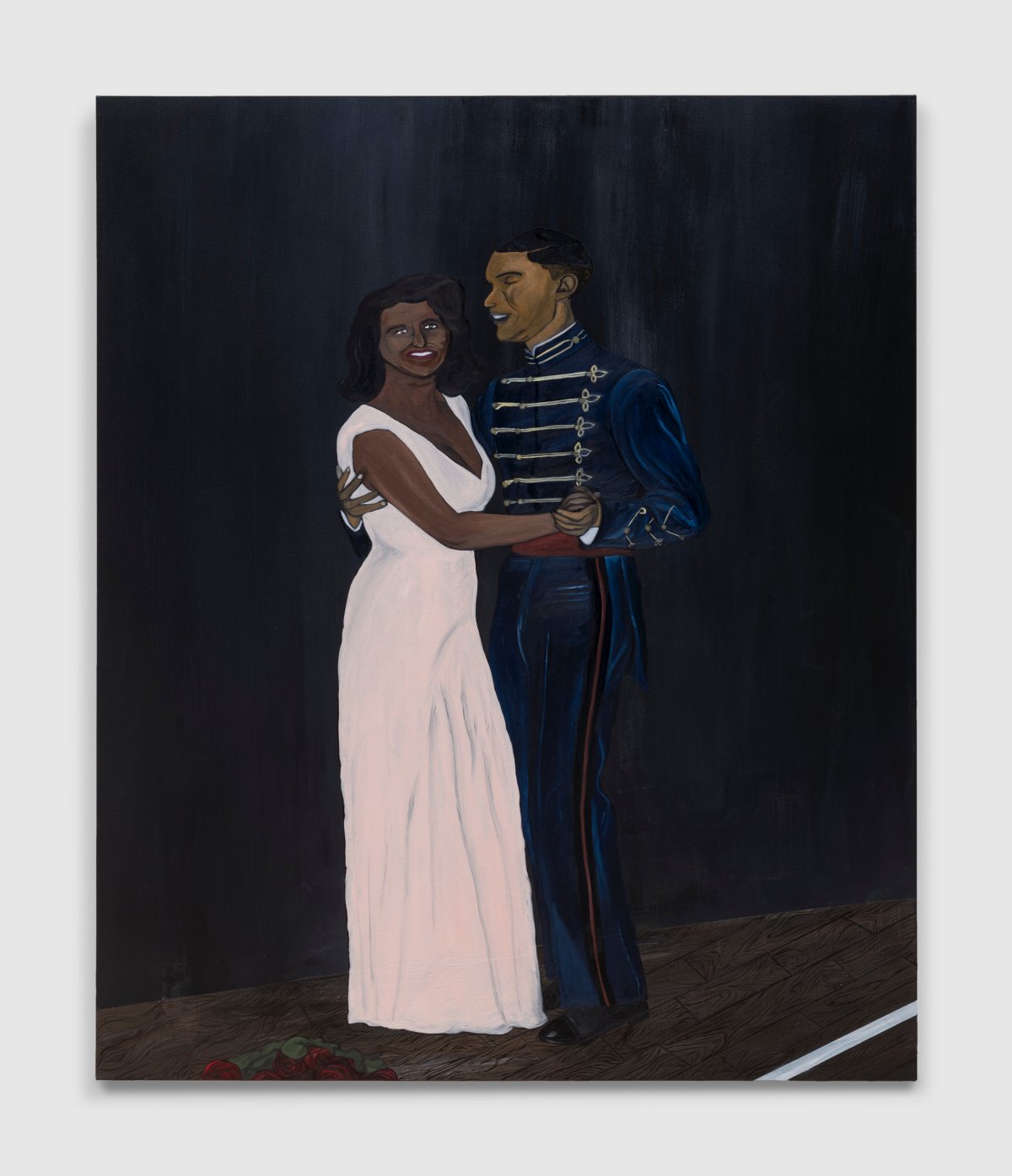 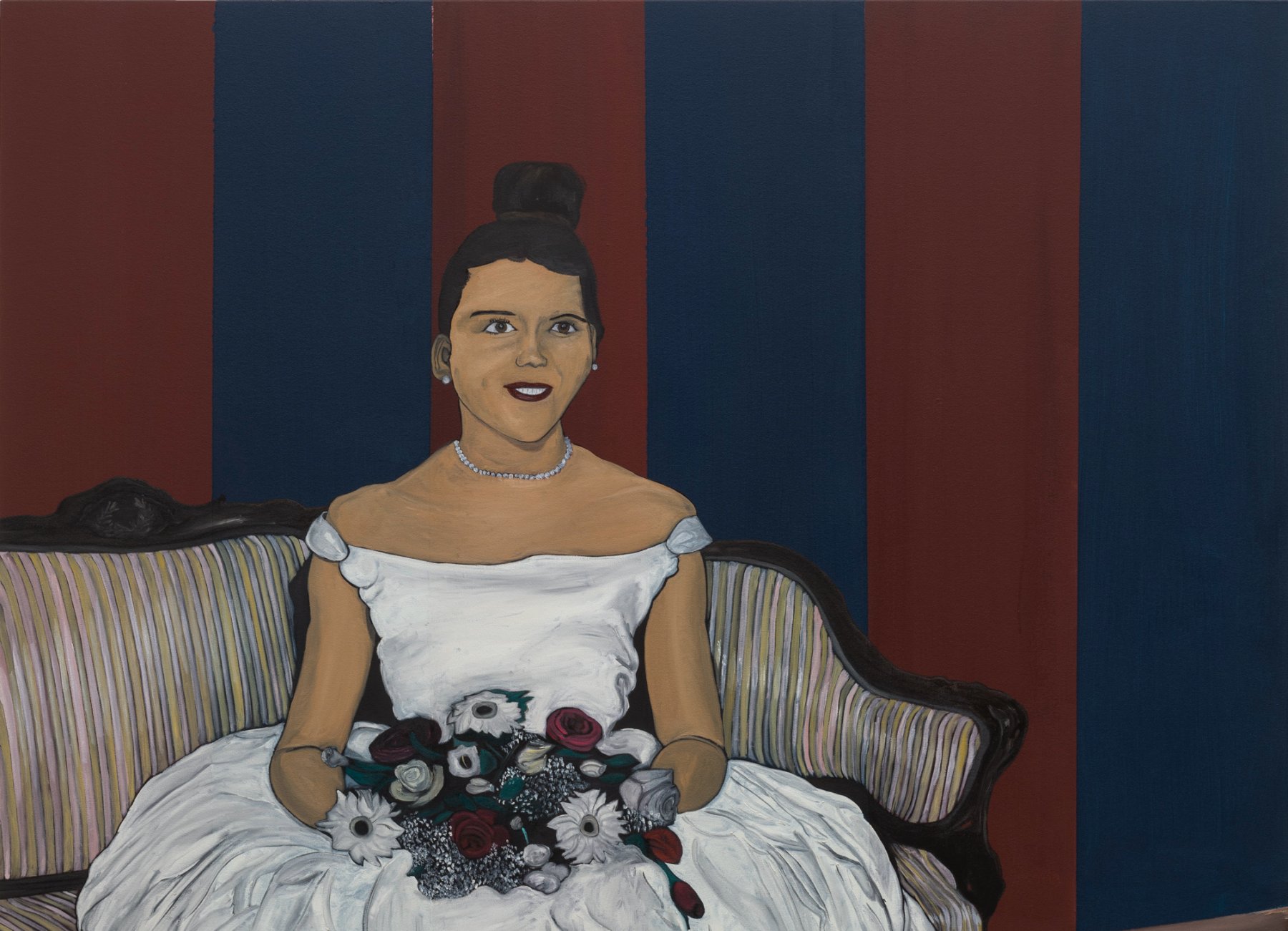 Bourgeoisie in Bloom sees Titus expand on the themes of ritual, nostalgia, and class that have characterised his previous work. In his new paintings, he focuses on debutante and cotillion balls in which young adults are presented to society. These mannered, stylized performances have undertones of class coding and inheritance that feel both timeless and contemporary.

Titus sees a vision of youth on the cusp of entering the adult social world, suffused with both longing and scepticism.

In ‘Central Park West,’ a lone figure holding a glass of champagne at the margins of a party lends a sinister note to the festivity. The figure at the centre of ‘My Baby’s Breath’ floats in a meringue-white dress, while stripes on the wall and divan recall the pattern-play interiors of the nineteenth-century French artist Edouard Vuillard. In ‘Shimmering Jubilee,’ a female figure seeks solitude on a balcony under a brilliant show of fireworks, as if she has fled the party just as the countdown begins.

The allure of glimpses recurs frequently in this series, as in much of Titus’s work. His subjects often seem caught unawares, alone in a well-oiled social machine. In contrast to other work on debutante culture focusing on large-scale social choreography, Titus’s work examines a choreography of solitude. Figures find themselves outside the action, ‘occupying spare moments with grace,’ as Chews-Bose writes.

Since his first solo exhibition in 2020, Titus has become known for his vivid, detailed style. Favouring bright panels of colour, he evokes lost traditions of cultural formality, using precise brushwork to delineate details of old-world glamour: the tilt of a bow tie, the line of a ballgown. His work recalls the work of Les Nabis and the Chicago Imagists, as well as the Eastern Seaboard pastoralia of Fairfield Porter.

Titus, who often draws on literary tropes, has said that he approached the subjects of Bourgeoisie in Bloom as though through the eyes of an ‘unexpected confidante,’ such as Nick Carraway in The Great Gatsby or Charles Ryder in Brideshead Revisited. This vantage point gives the work a subtle tension: reinscribing an old-fashioned ritual in the eyes of a younger audience for whom such pageantry has become cultural memory. ‘I wanted to imagine this exhibition as a morning walk through palatial grounds, where last night’s party is fading in the sunlight,’ writes the artist.

Honor Titus (b. 1989, Brooklyn, NY) is a self-taught American artist who lives and works in Los Angeles, California. Recent solo exhibitions include Spotlight: Honor Titus, FLAG Art Foundation, New York, NY (2022); For Heaven’s Sake, Timothy Taylor, New York, NY (2021) and Goodness Gracious, Studio Henry Taylor, Los Angeles, CA (2020). His work has been part of numerous group exhibitions, including IRL (In Real Life), Timothy Taylor, London, United Kingdom (2021); Parallel Worlds, Nassima Landau, Tel Aviv, Israel (2021); and I will wear you in my heart of heart, The FLAG Art Foundation, New York, NY (2021); (Nothing but) Flowers, Karma, New York, NY (2020); among others. His works are held in the collections of the Rennie Museum, Vancouver, Canada; the Beth DeWoody Foundation, New York, NY; and the Longlati Foundation, Shanghai, China. Titus has been the subject of reviews and articles in publications including Art in America, Artnet, Frieze, GQ, Interview Magazine, The New York Times, Town & Country, among others.