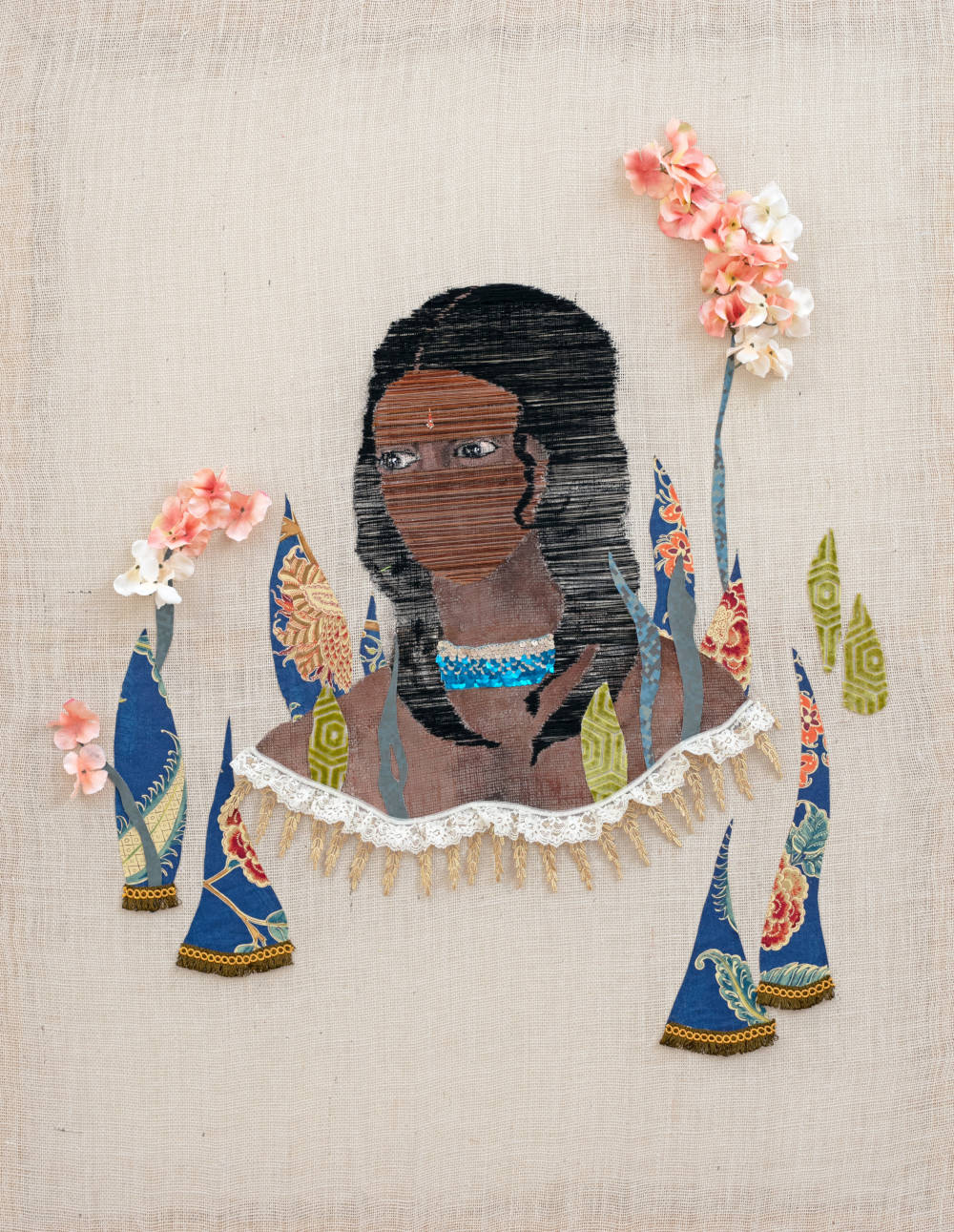 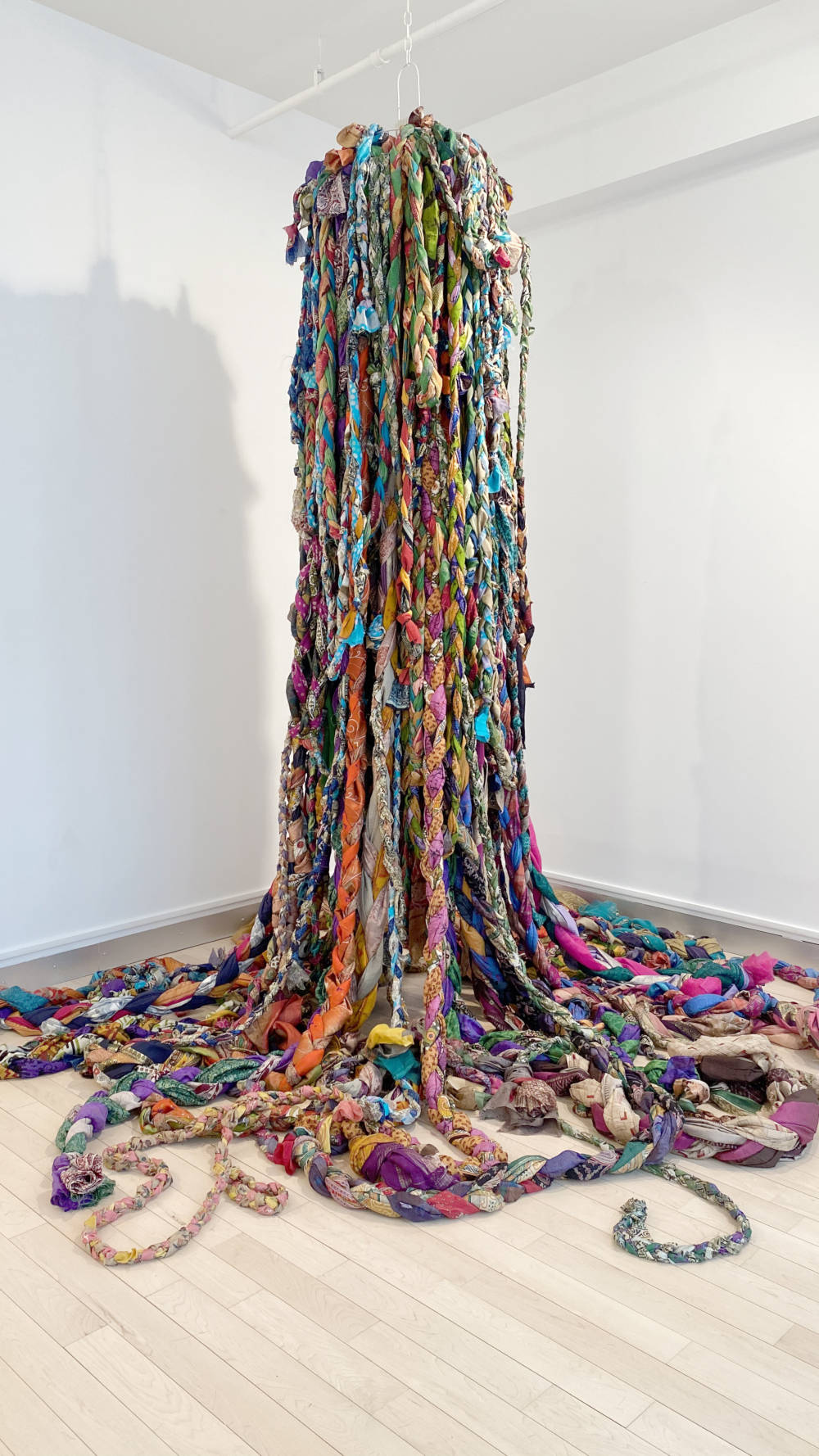 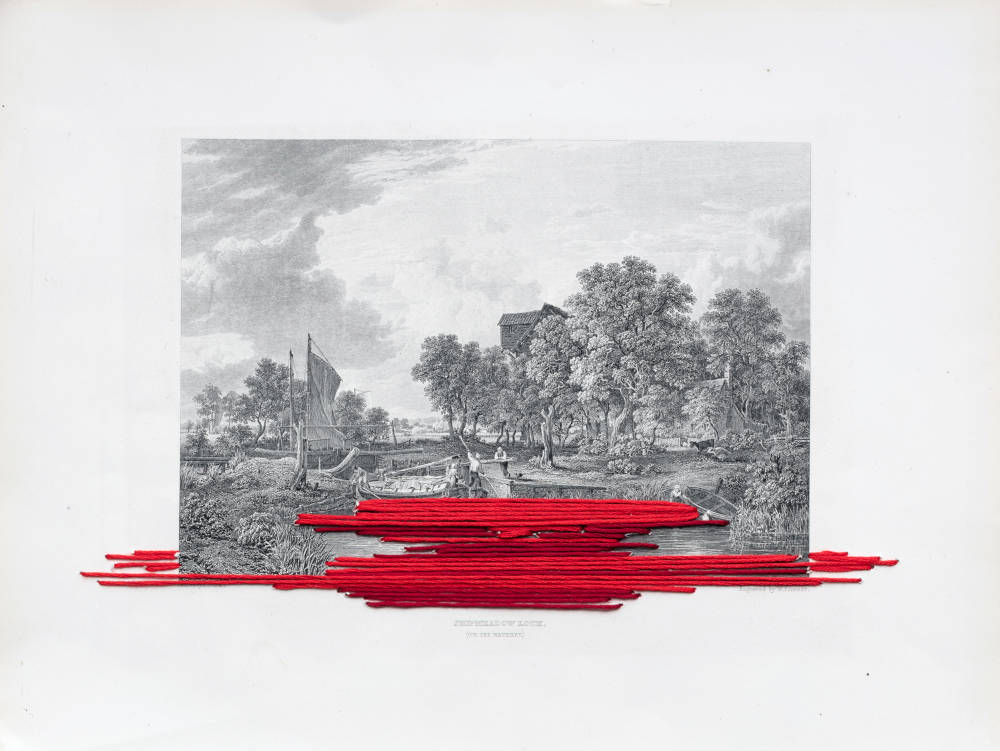 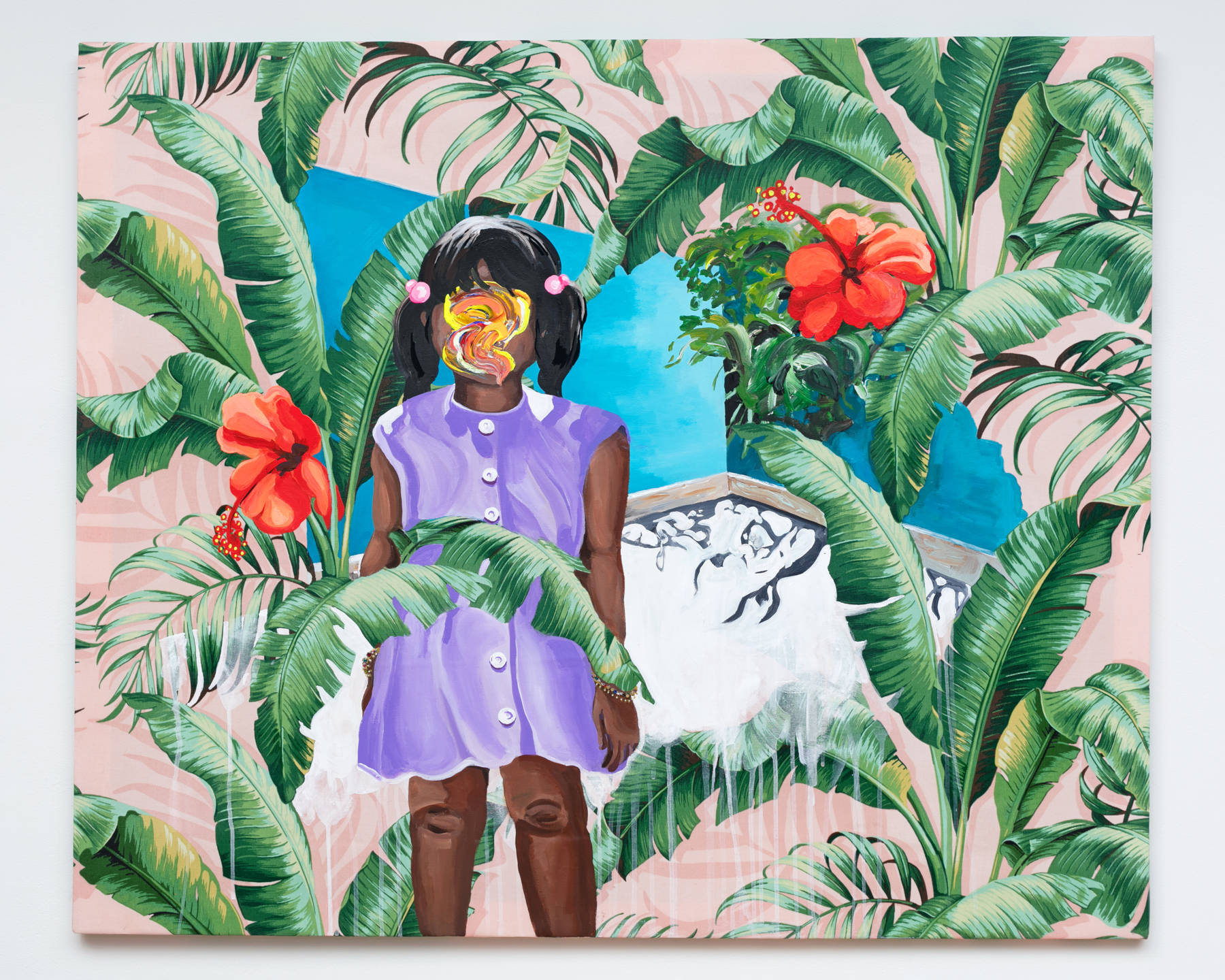 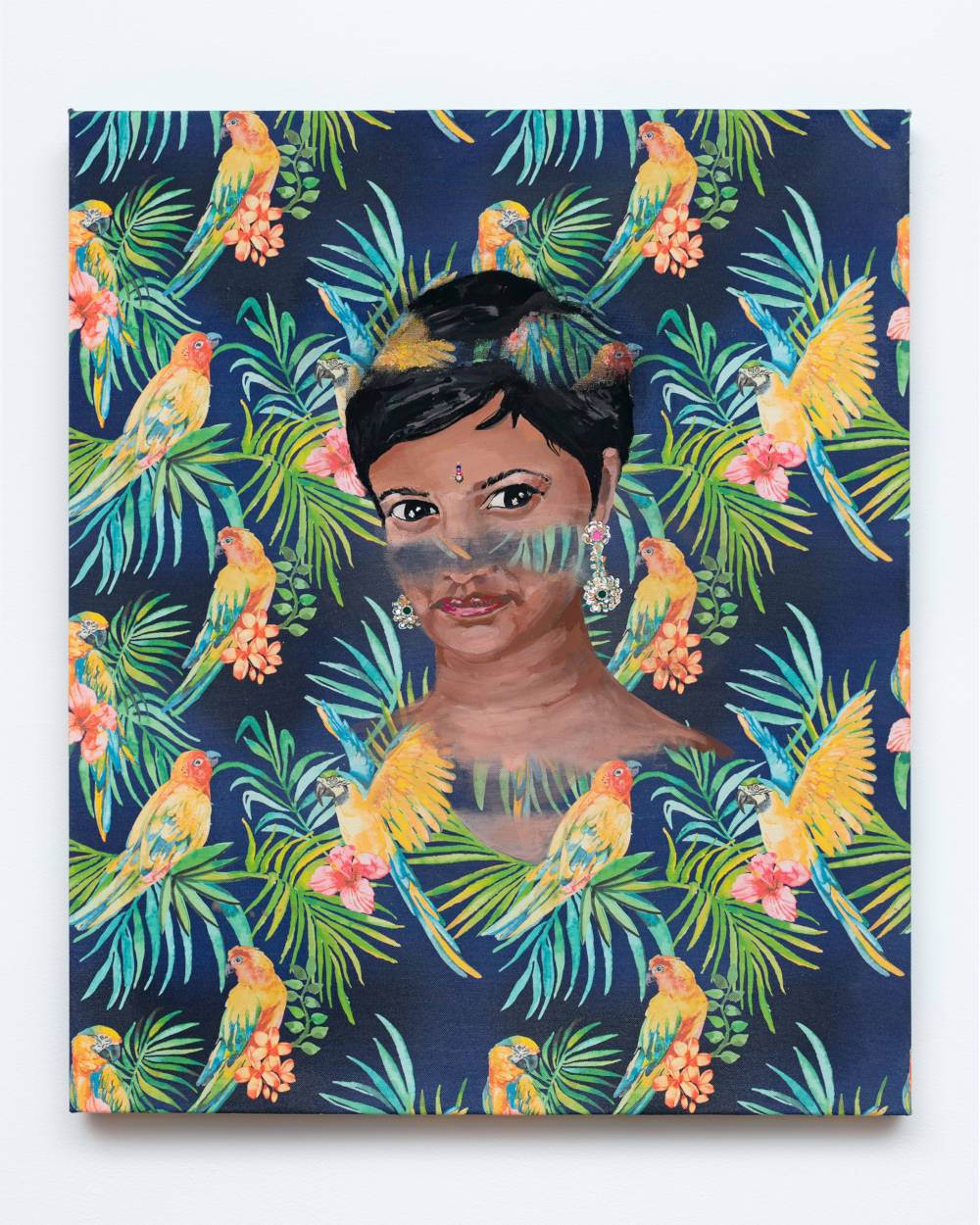 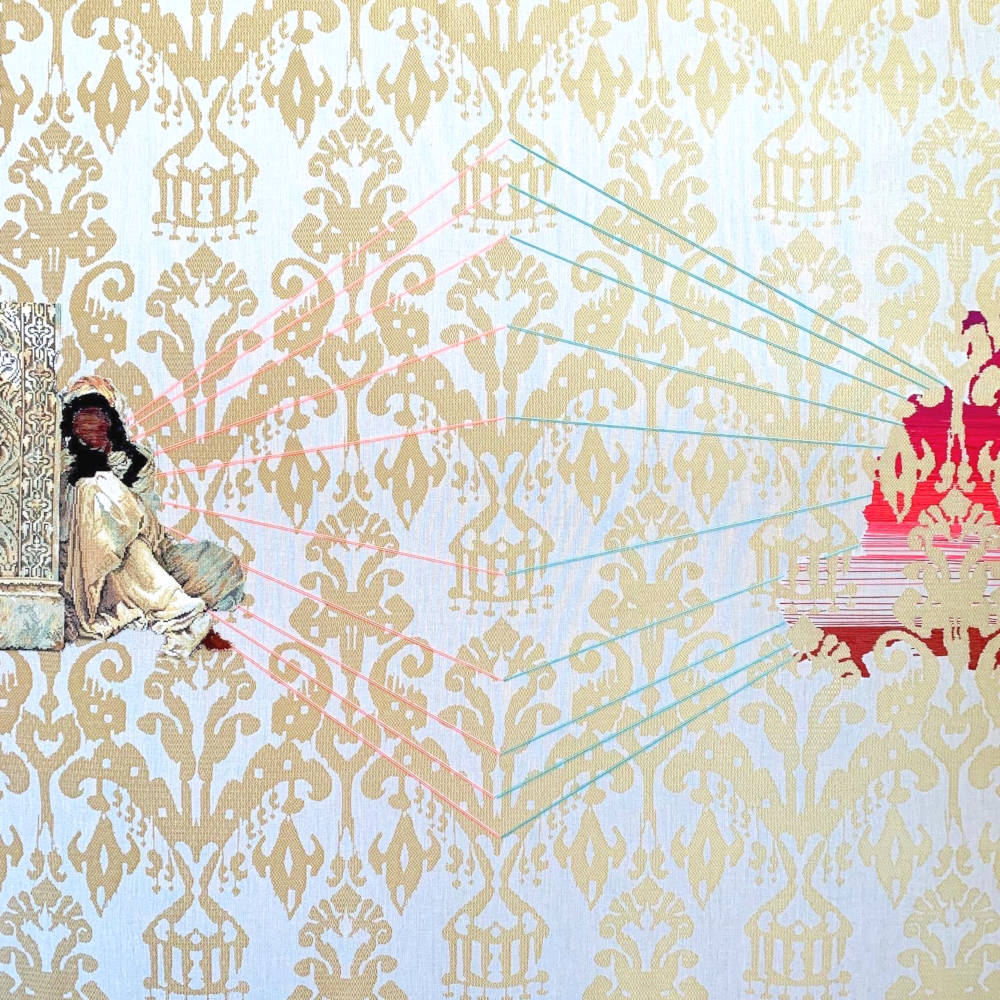 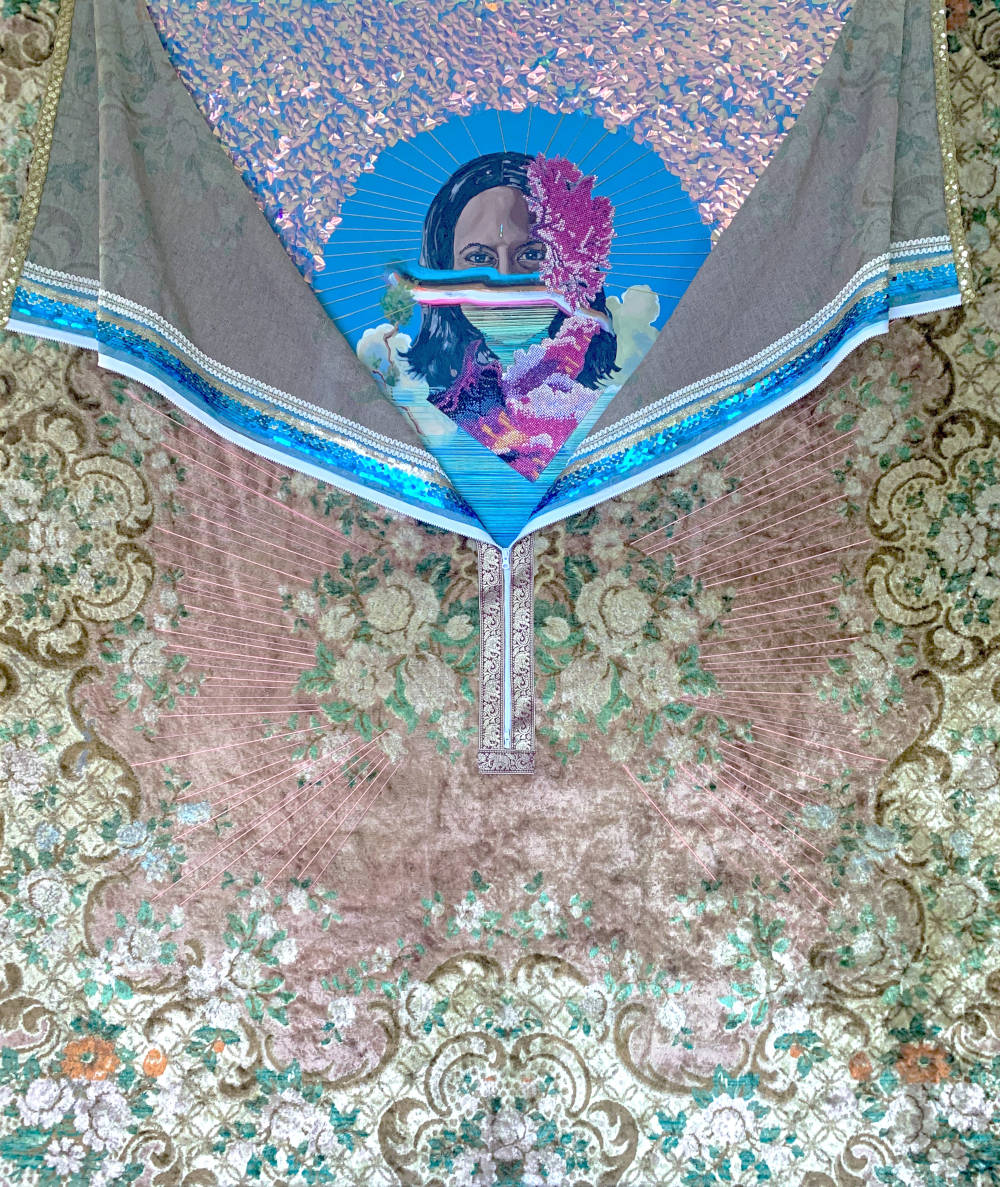 Suchitra Mattai
Self Portrait as a Stranger, 2020 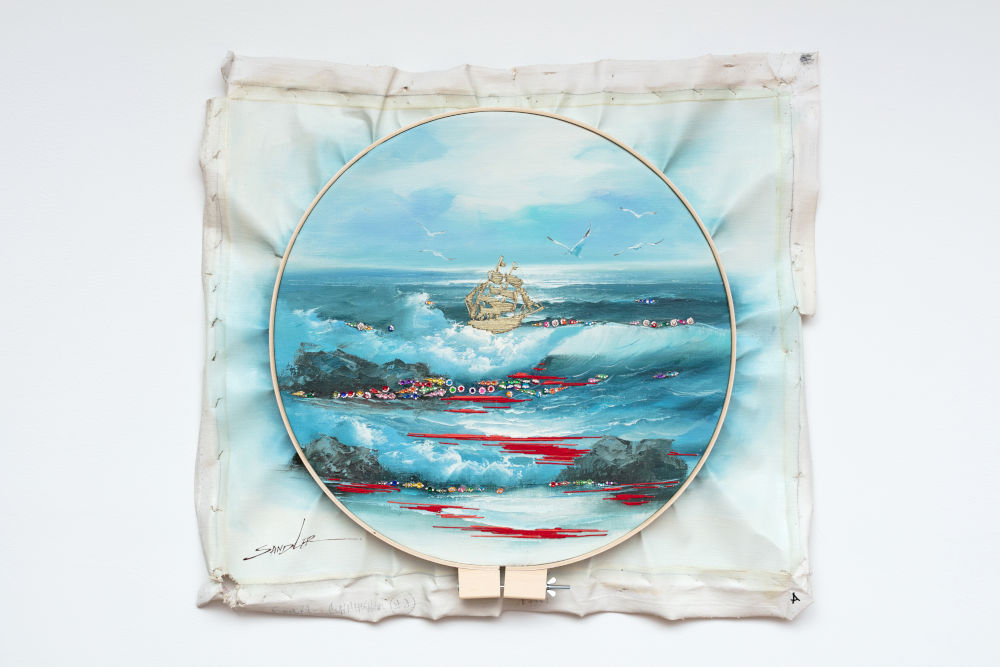 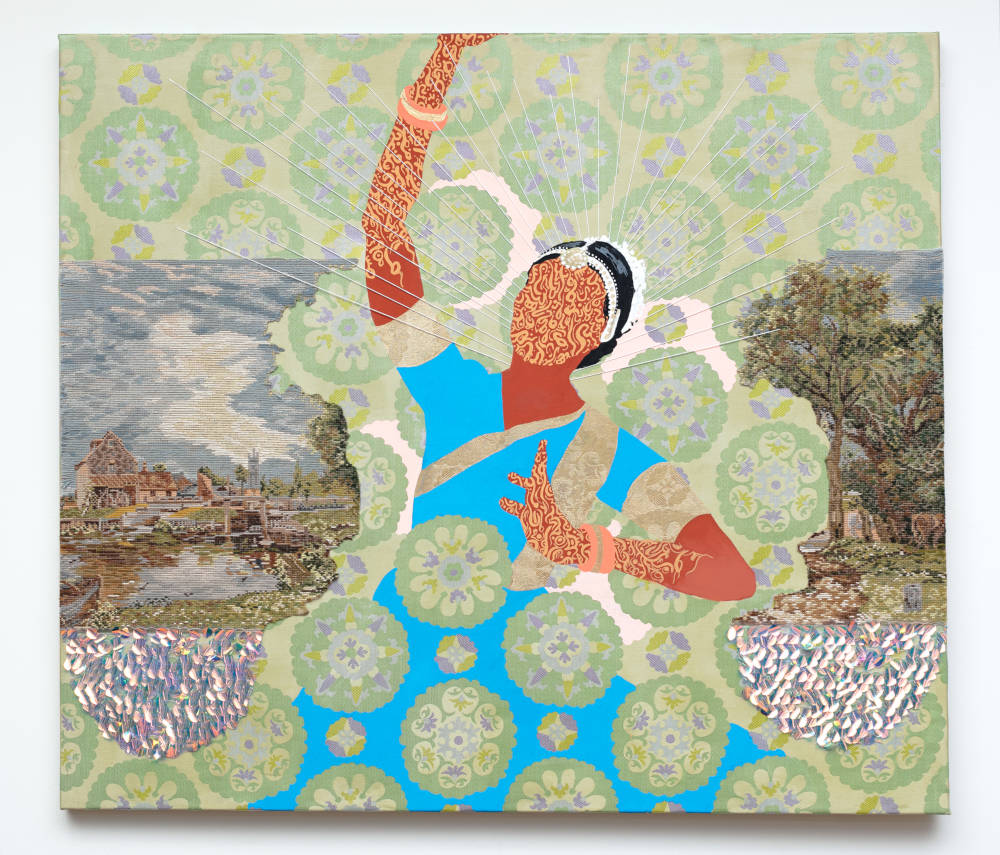 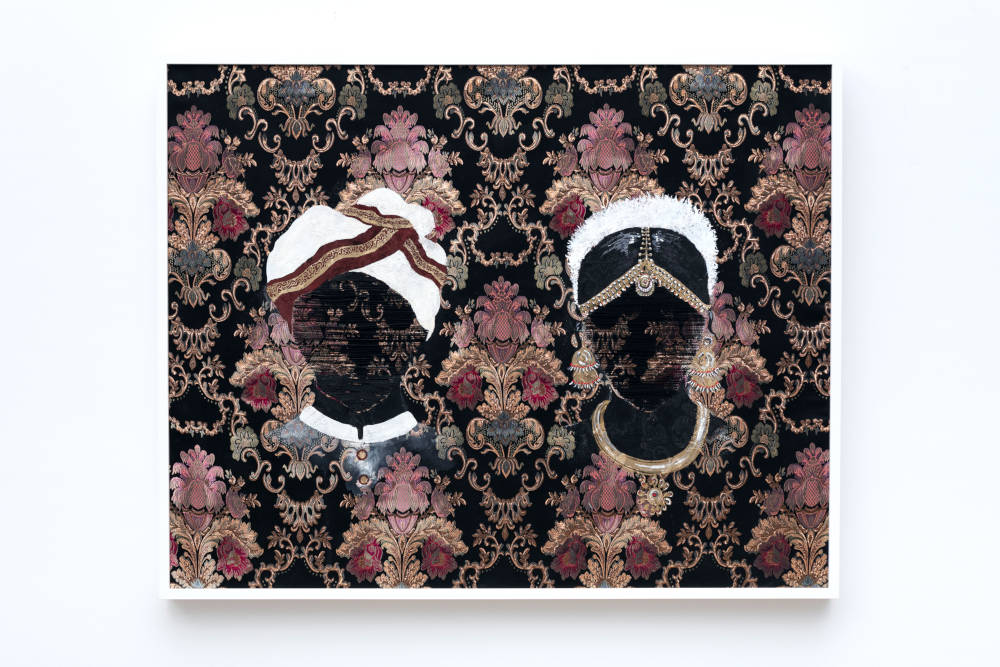 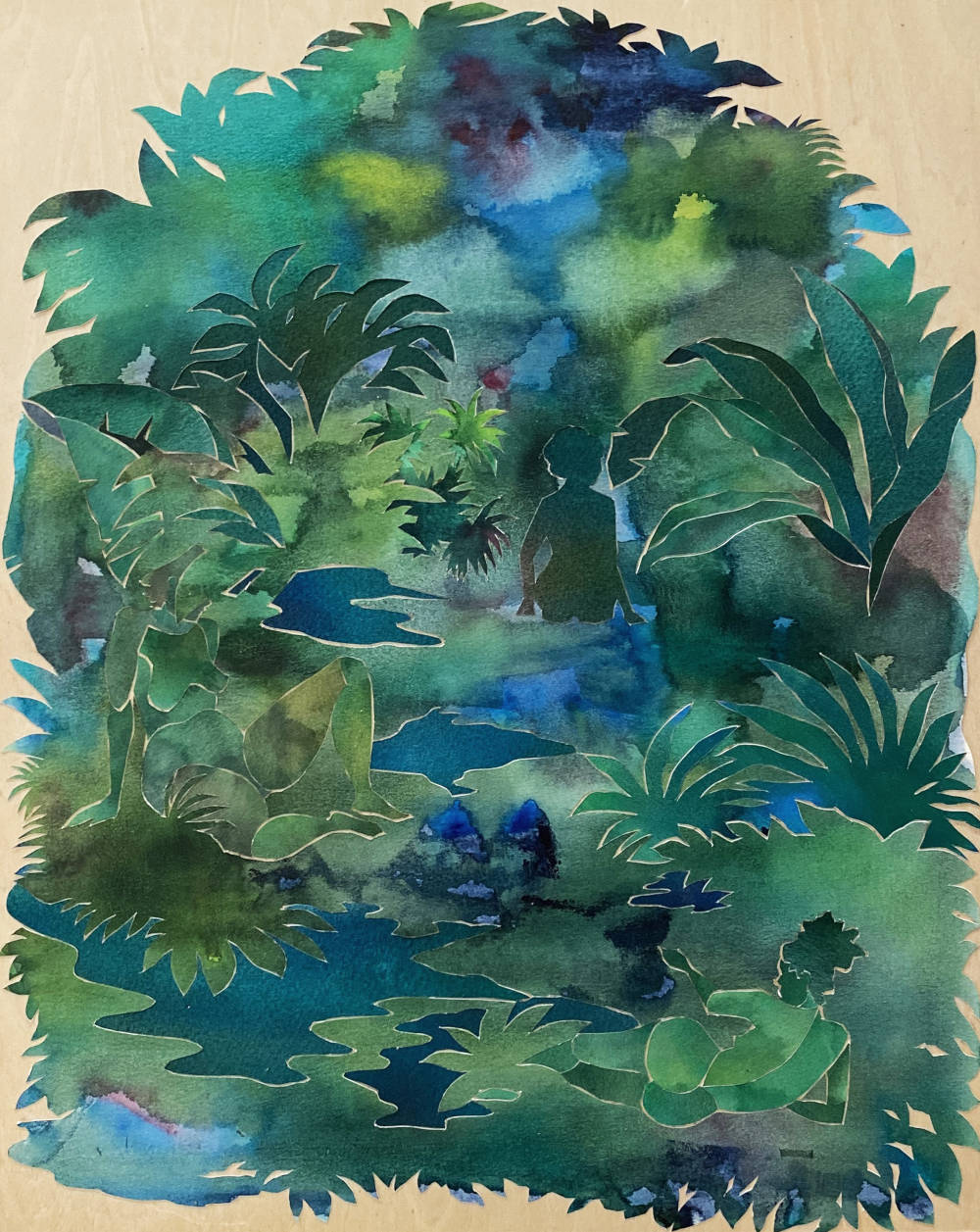 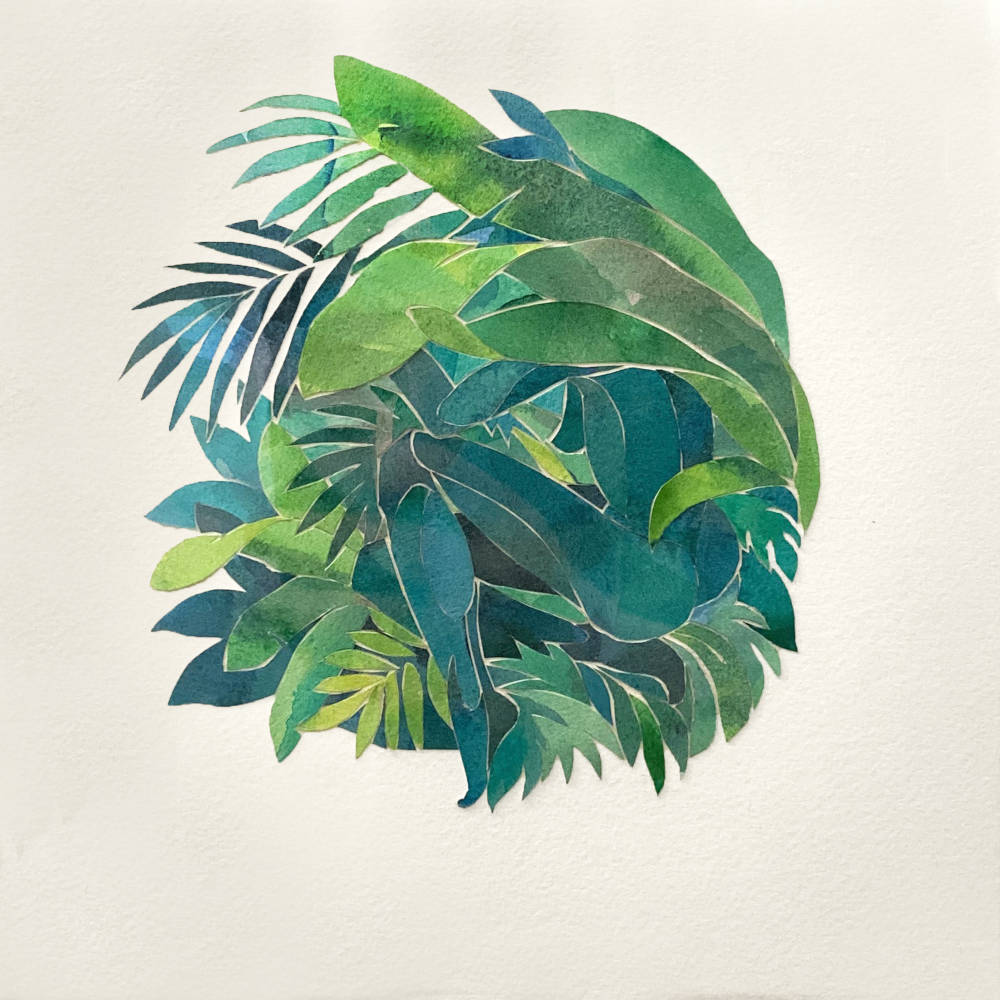 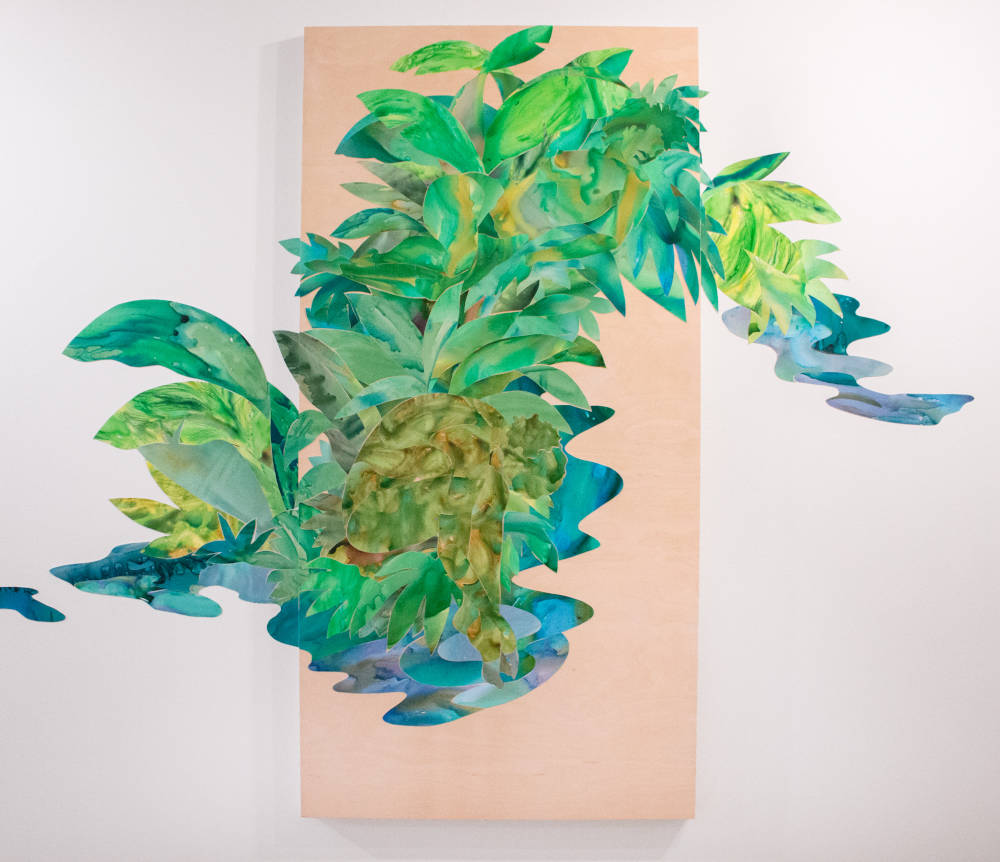 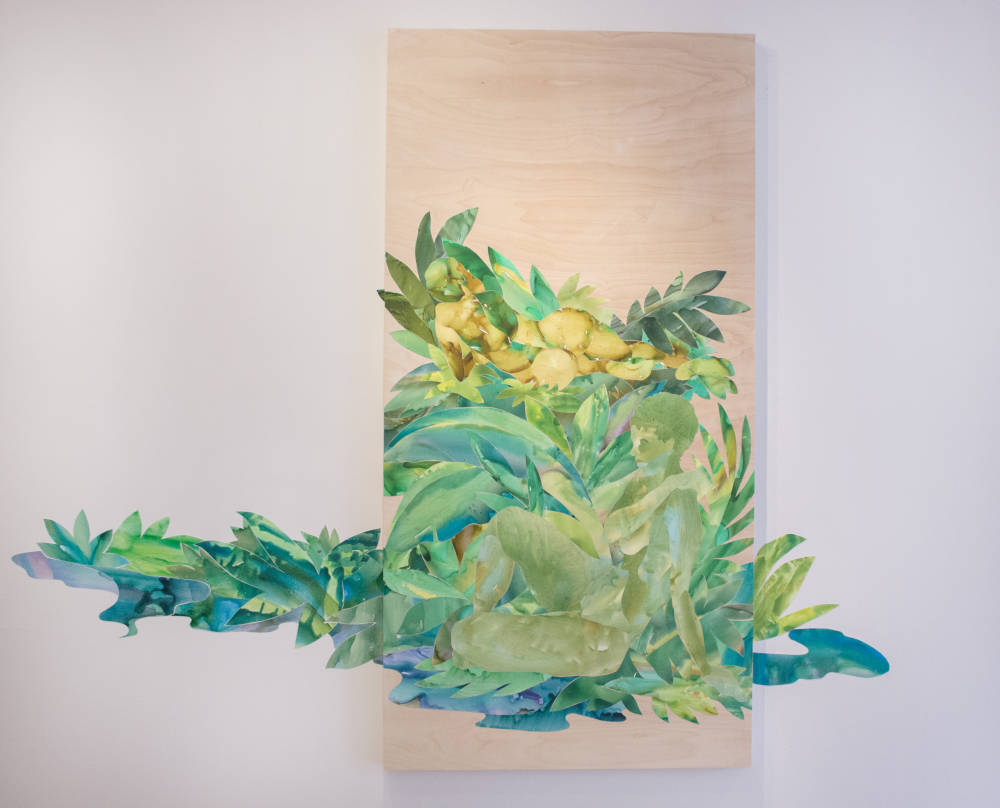 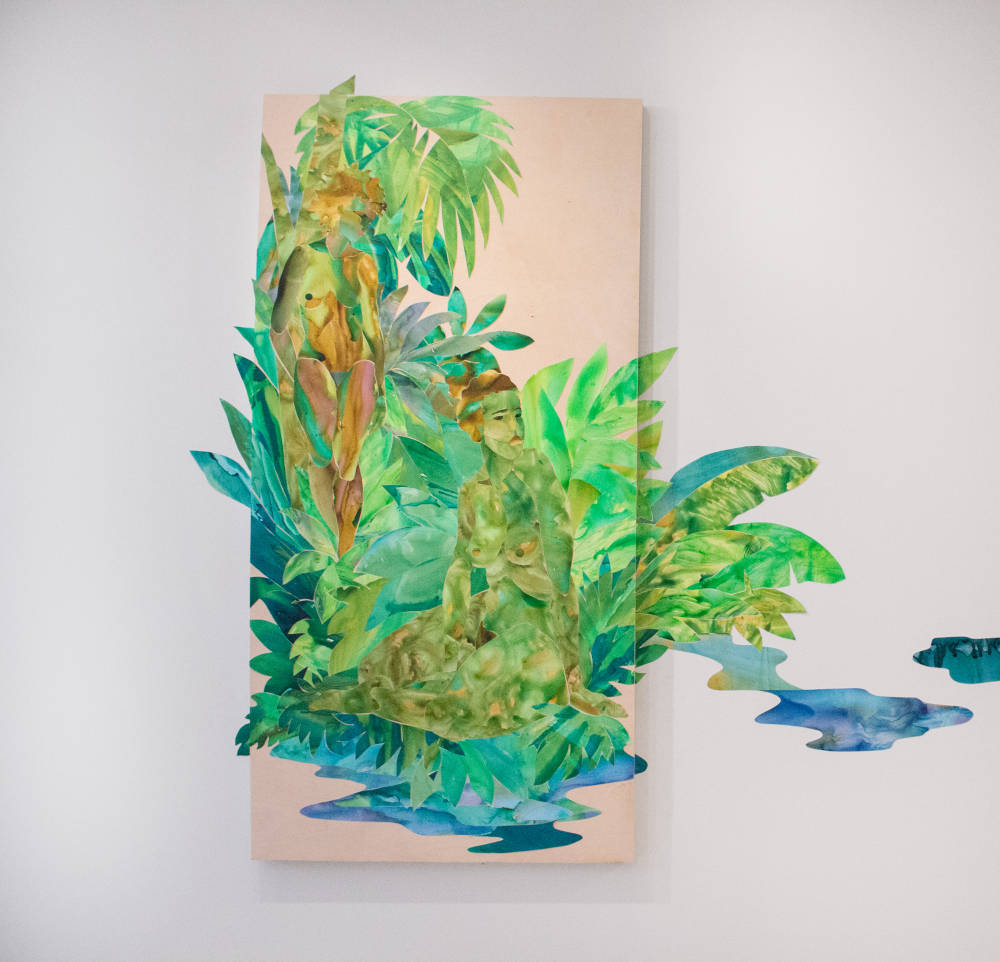 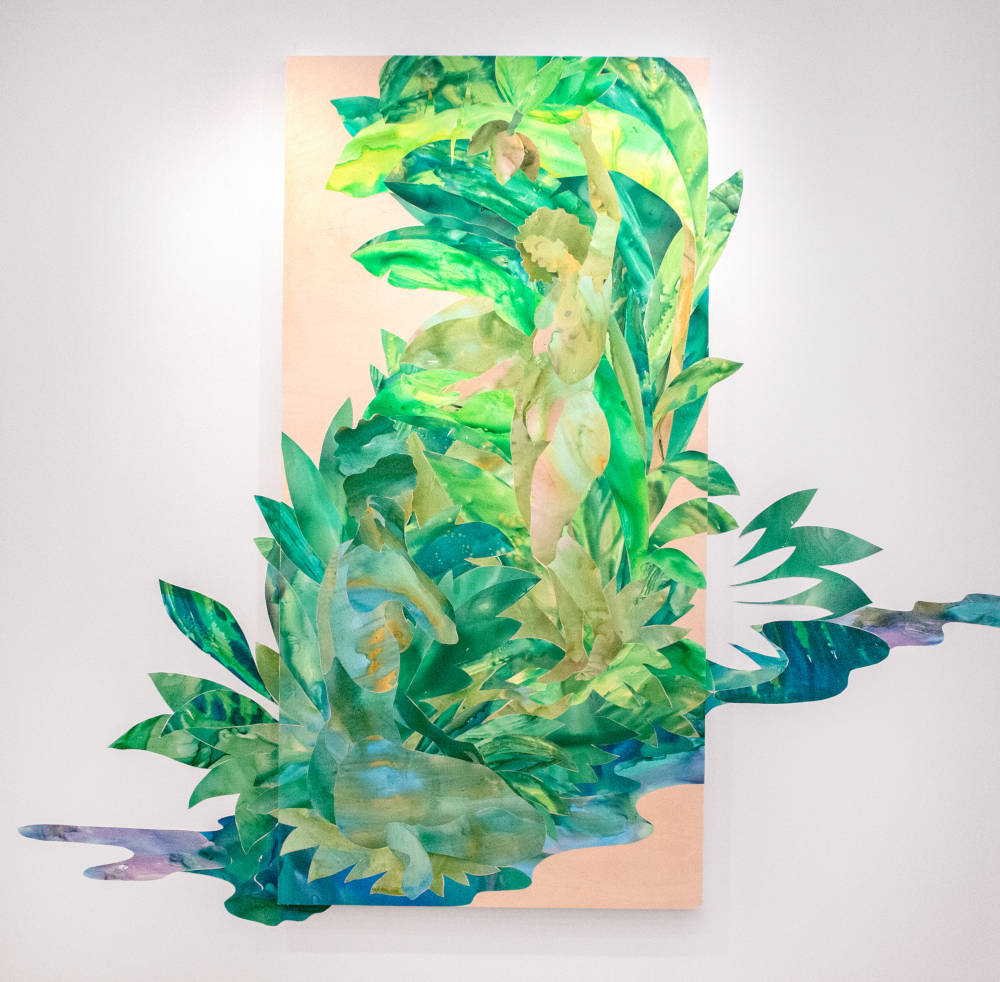 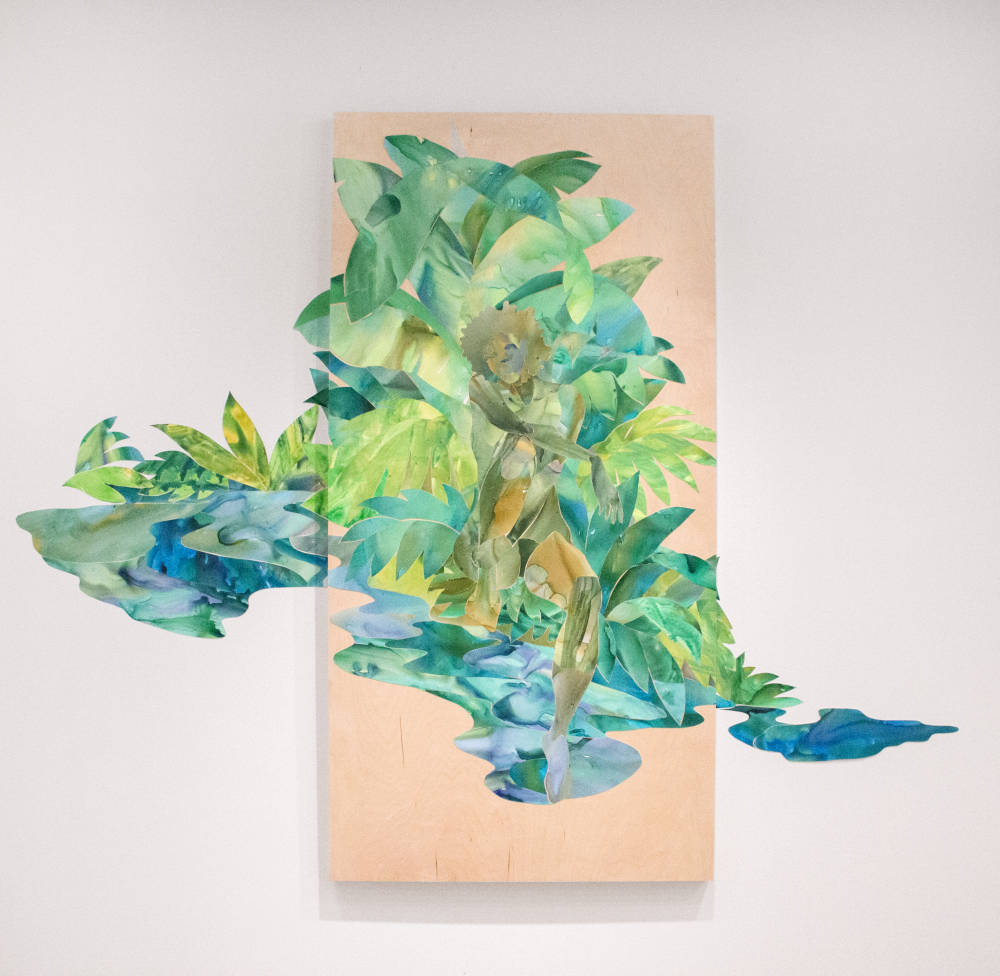 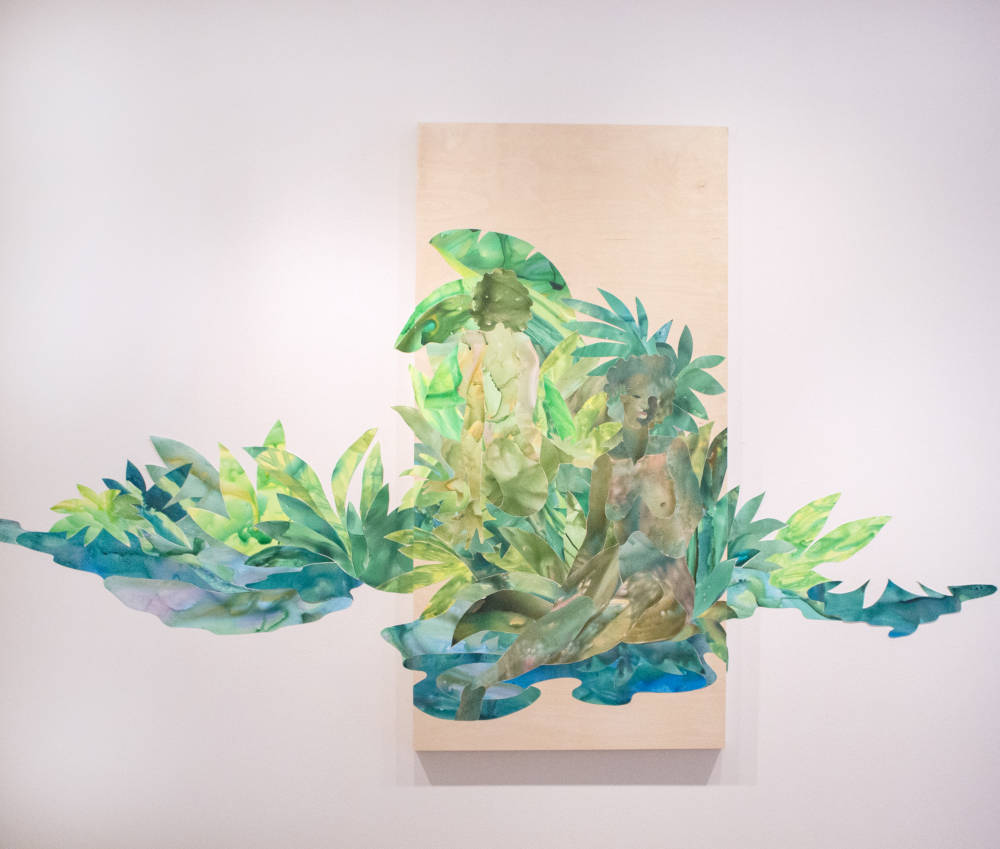 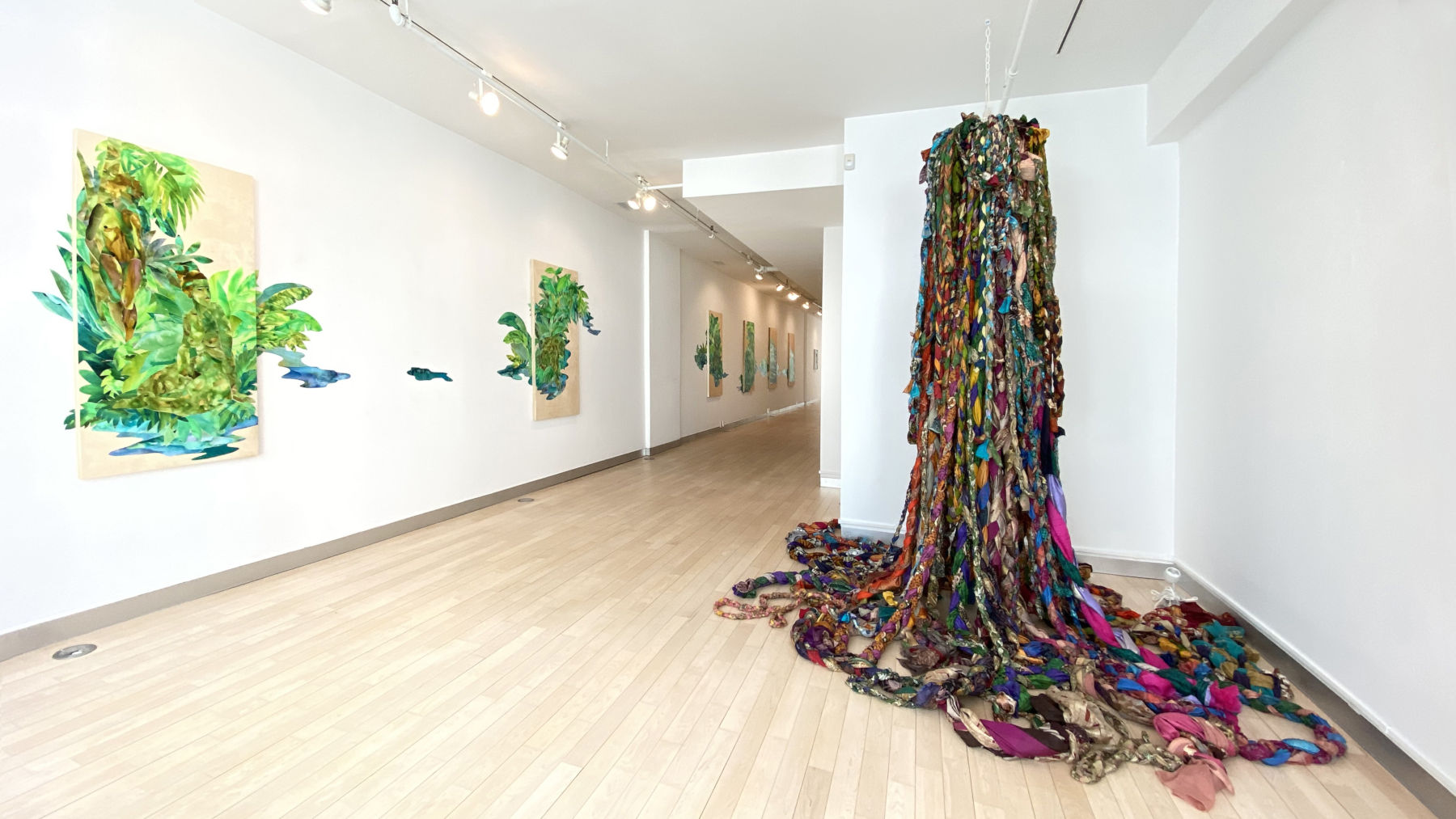 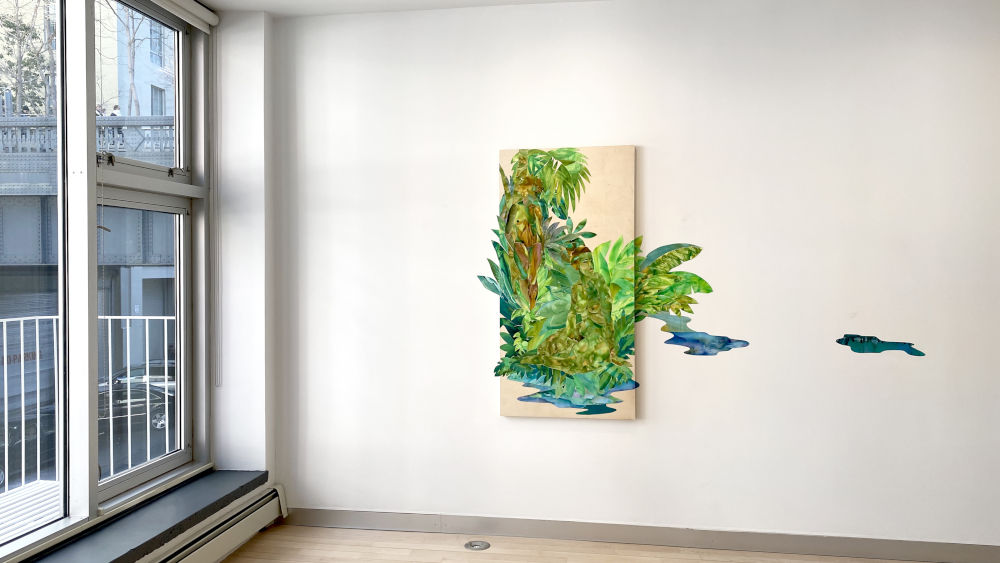 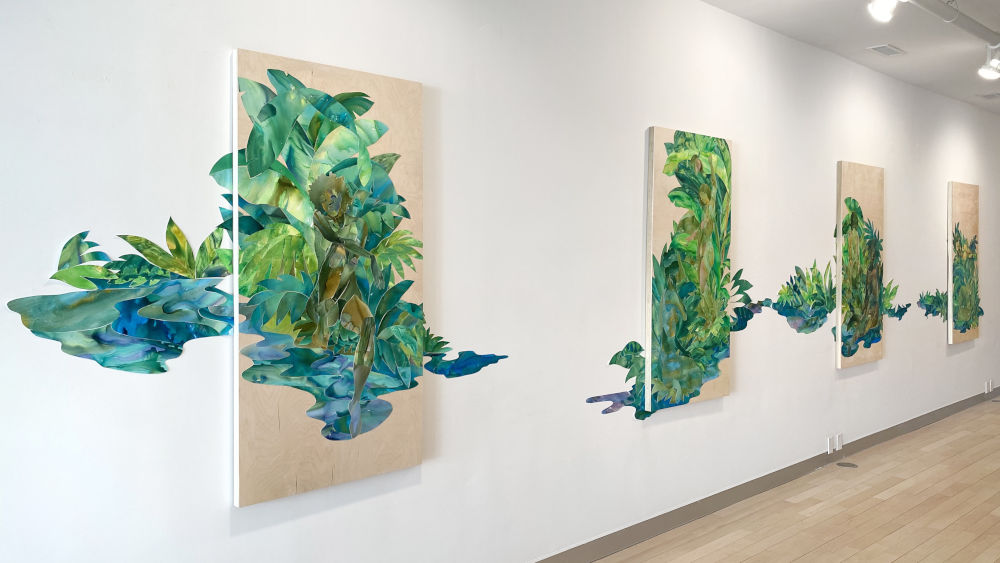 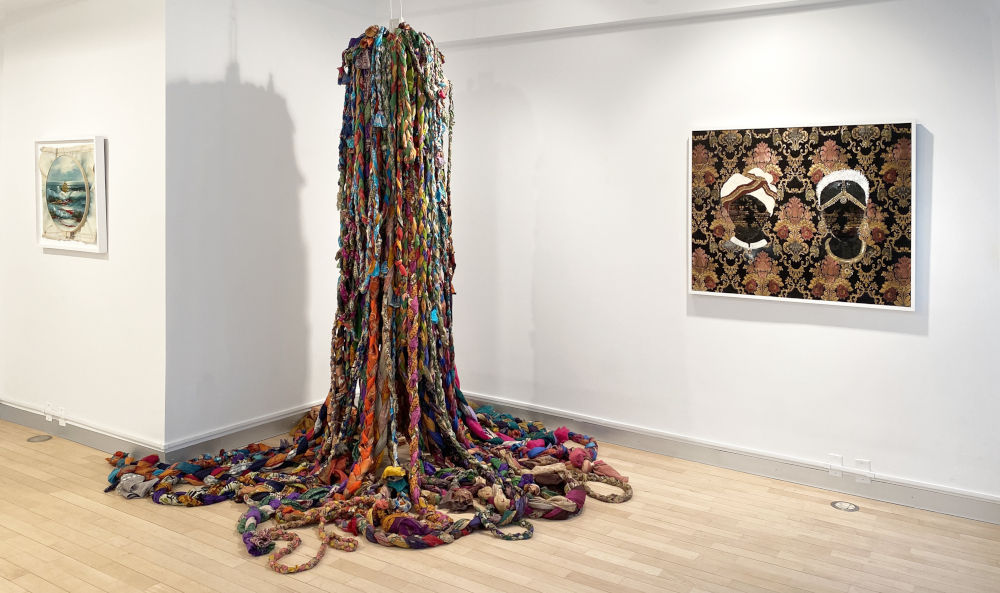 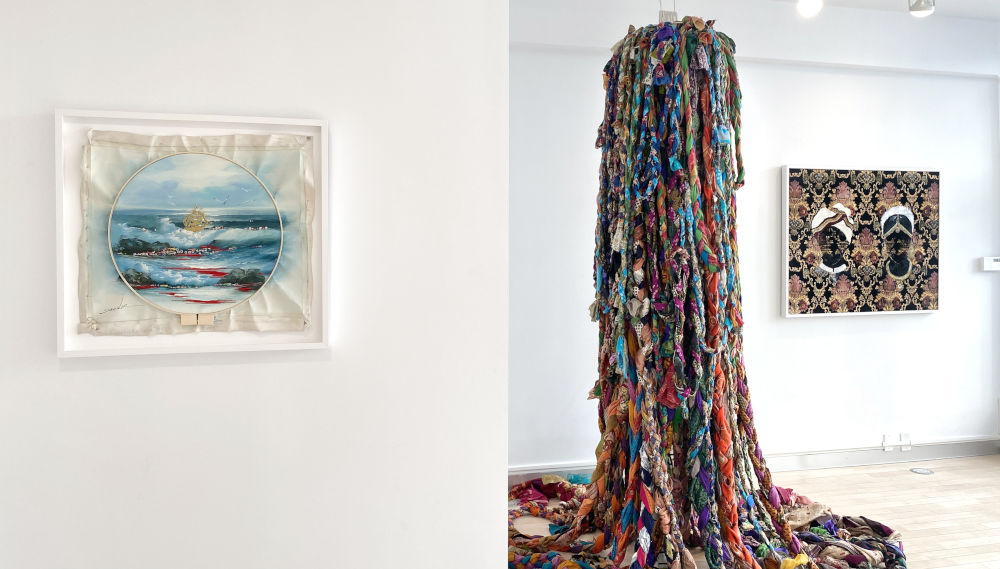 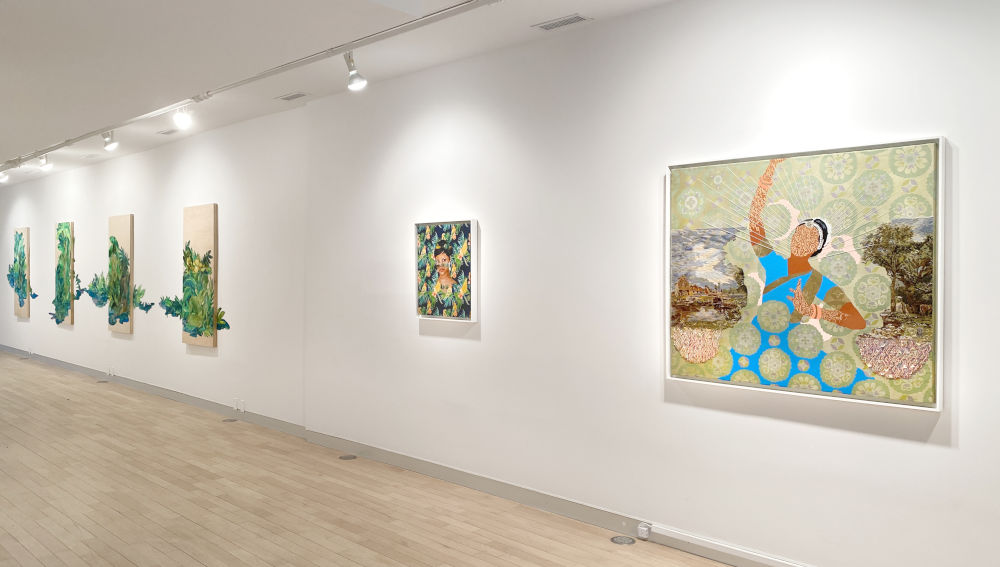 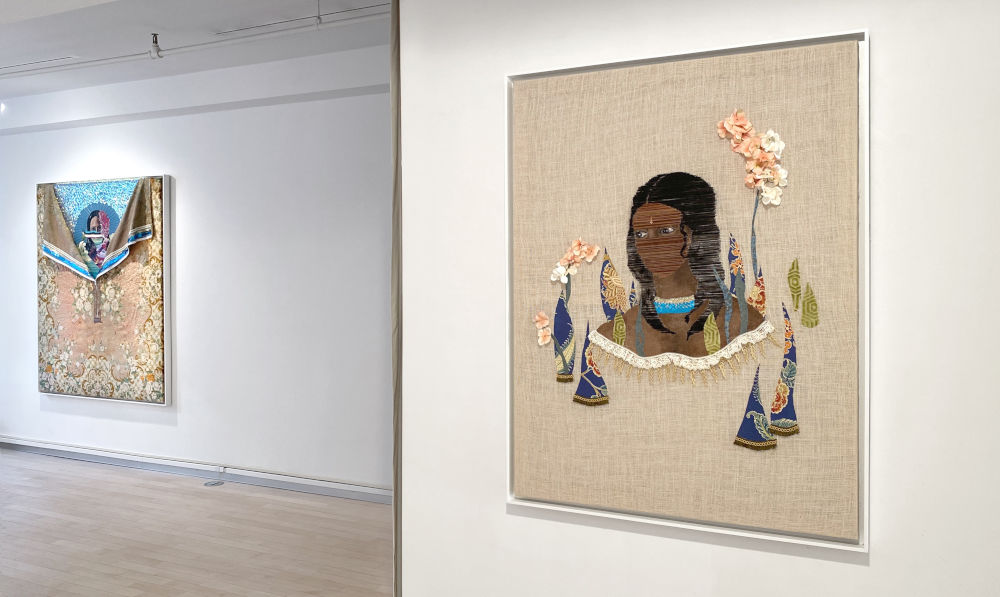 Featuring painting and embroidery as well as a large-scale, site-specific installation by Mattai, the exhibition captures the intricate formal approaches Mattai and Tarver take to reveal the voices and identities of individuals—in particular women—who have been obscured and made invisible through colonialism, oppression, and deep rooted stereotypes and tropes. Mattai and Tarver bring their distinct backgrounds to bear as they explore the complexity of identity through personal and collective histories, engaging with narratives of subjugation that remain relevant today.

Born in Guyana and currently working in Denver, Colorado, Suchitra Mattai uses her personal and family history as a starting point to unearth themes relating to postcolonialism. Using a wide range of materials and media, Mattai is interested in questioning mainstream narratives of colonialism and uncovering what and who has been written out of history. In recent years, the artist has been particularly focused on the untold stories of indentured female laborers and slaves, especially those who worked on sugar plantations in the Caribbean in the 19th and early 20th centuries. Often using meticulous threadwork and embroidery, Mattai views her work as a “collaboration with the women of the past,” giving voice to those who were often voiceless during their lifetimes.

At Hollis Taggart Contemporary, Mattai presents a new site-specific large-scale installation made from hundreds of vintage saris the artist sourced from India, her own family and friends, and other parts of the world. History Reclaimed also features recent wall works by the artist, including Wedded Bliss (2019). Inspired by a photograph of her parents on their wedding day, the artist used acrylic paint, goauche, and thread to portray her parents against a background of European Baroque threadwork. With their headwear depicted in elaborate brushwork, Mattai’s parents’ faces are hidden behind black thread which blends into the European threadwork. Weaving together various influences as if connecting diaspora and complex identities, Mattai’s work is a bold visual statement questioning what is lost and what is preserved over the course of decades of colonization, displacement, and migration.

Currently based in Atlanta, Adrienne Elise Tarver engages with the invisibility and complexity of Black female identities in the Western world. With a practice that spans painting, sculpture, installation, photography, and video, Tarver investigates the individual and collective experience of the Black female as she relates to her landscape, from domestic spaces to the often Western-created fantasy of her tropical origins. In recent years, Tarver has turned to the tropics, exploring the ways in which the forced migration of people from tropical climates is mirrored by that of exotic plants, which are still today often uprooted and transplanted for Western audiences.

In History Reclaimed, Tarver presents a new series of hanging portraits of Black women, including both archetypes and specific historical figures. The exhibition also includes works from Tarver’s recent Terra Incognita series of large-scale paintings, with tropical imagery extending off the canvases and spreading onto the surrounding white gallery walls. Referencing areas marked as “unknown territories” on colonial maps made by Western white male cartographers and explorers, Terra Incognita reclaims the fantasy and mystery of such lands and presents them from a Black female perspective.

“Since its founding in 1979, our gallery has been committed to reexamining the art historical canon and uncovering the stories of artists – often female – who have been written out of history,” said Hollis Taggart. “We’re thrilled that our growing contemporary program has created new opportunities to expand this mission in a contemporary context through the innovative and exciting work of today’s practitioners. Suchitra and Adrienne’s work, in particular, gives voice to those who have been silenced during decades of repression and displacement, creating a multifaceted conceptual dialogue about issues which remain at the forefront of our society today.”

Suchitra Mattai received an MFA in Painting and Drawing and an MA in South Asian art, both from the University of Pennsylvania, Philadelphia. In 2019, Mattai was commissioned by the Sharjah Biennial to create Imperfect Isometry, a large-scale fiber-based installation investigating the complex relationship between history, memory, and the construction of identity in diasporic communities. Mattai was also recently commissioned to create a large-scale installation for Crystal Bridges Museum’s State of the Art 2020. Other recent projects include commissions with the Denver Art Museum, the Museum of Contemporary Art Denver, and solo exhibitions at the Center for Visual Art, Metropolitan State University Denver (2018), K Contemporary Gallery, Denver (2018), and grayDuck Gallery, Austin (2018). She has also exhibited her work in Philadelphia, New York City, Washington, DC, Minneapolis, Denver, Austin, Berlin, London, and Wales.

Adrienne Elise Tarver received an MFA from the School of the Art Institute of Chicago and a BFA from Boston University. In 2017, Tarver was selected by artnet as one of “14 Emerging Female Artists to watch in 2017.” She has exhibited nationally and abroad, including solo exhibitions at Ochi Projects, Los Angeles; Wave Hill, Bronx; Victori+Mo, New York; BRIC Project Room, Brooklyn; and A-M Gallery, Sydney, Australia. Tarver is currently the Associate Chair of Fine Arts at Savannah College of Art and Design’s Atlanta Campus (SCAD Atlanta) and a Residency Advisor for Trestle Art Space in Brooklyn, NY.

Courtesy of the artist and Hollis Taggart, New York