“Hiro is no ordinary man. He is one of the few artists in the history of photography. He is able to bring his fear, his isolation, his darkness, his splendid light to film.” Richard Avedon 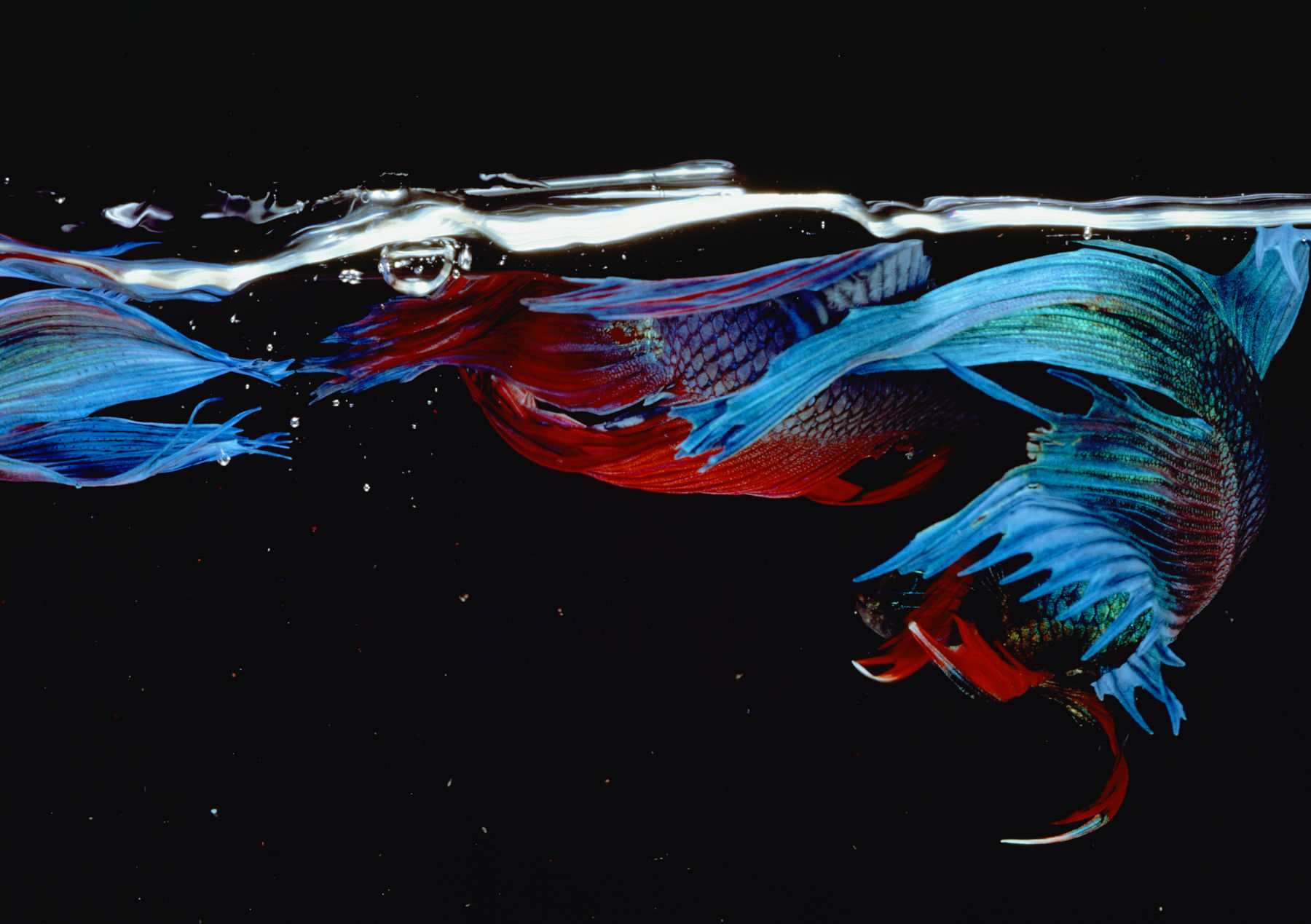 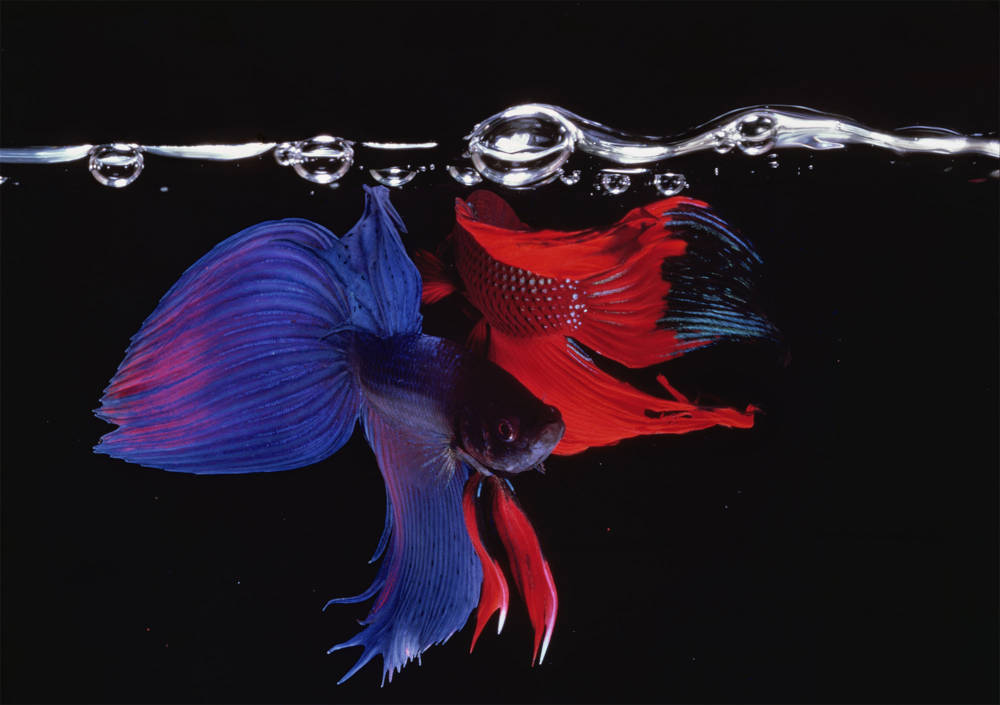 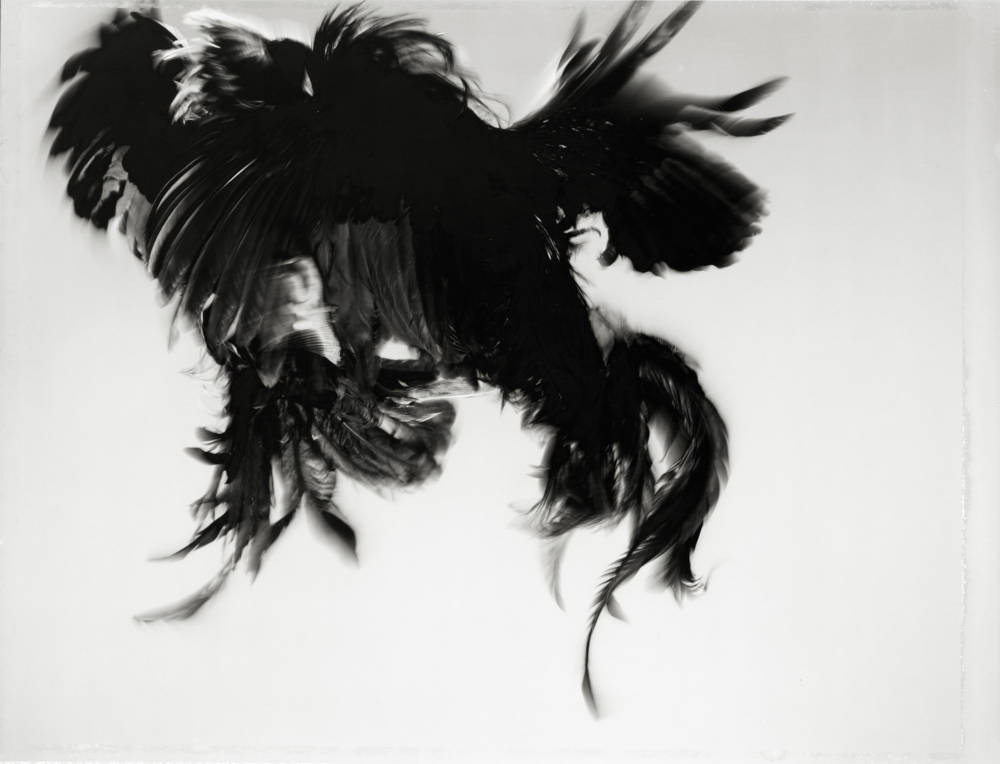 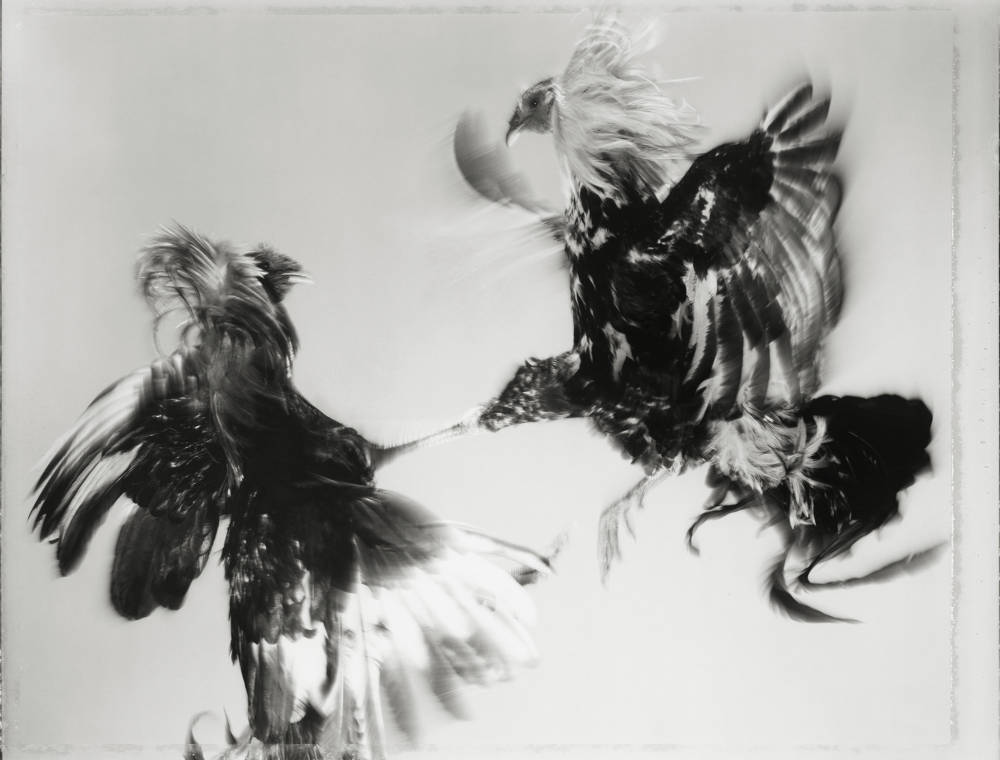 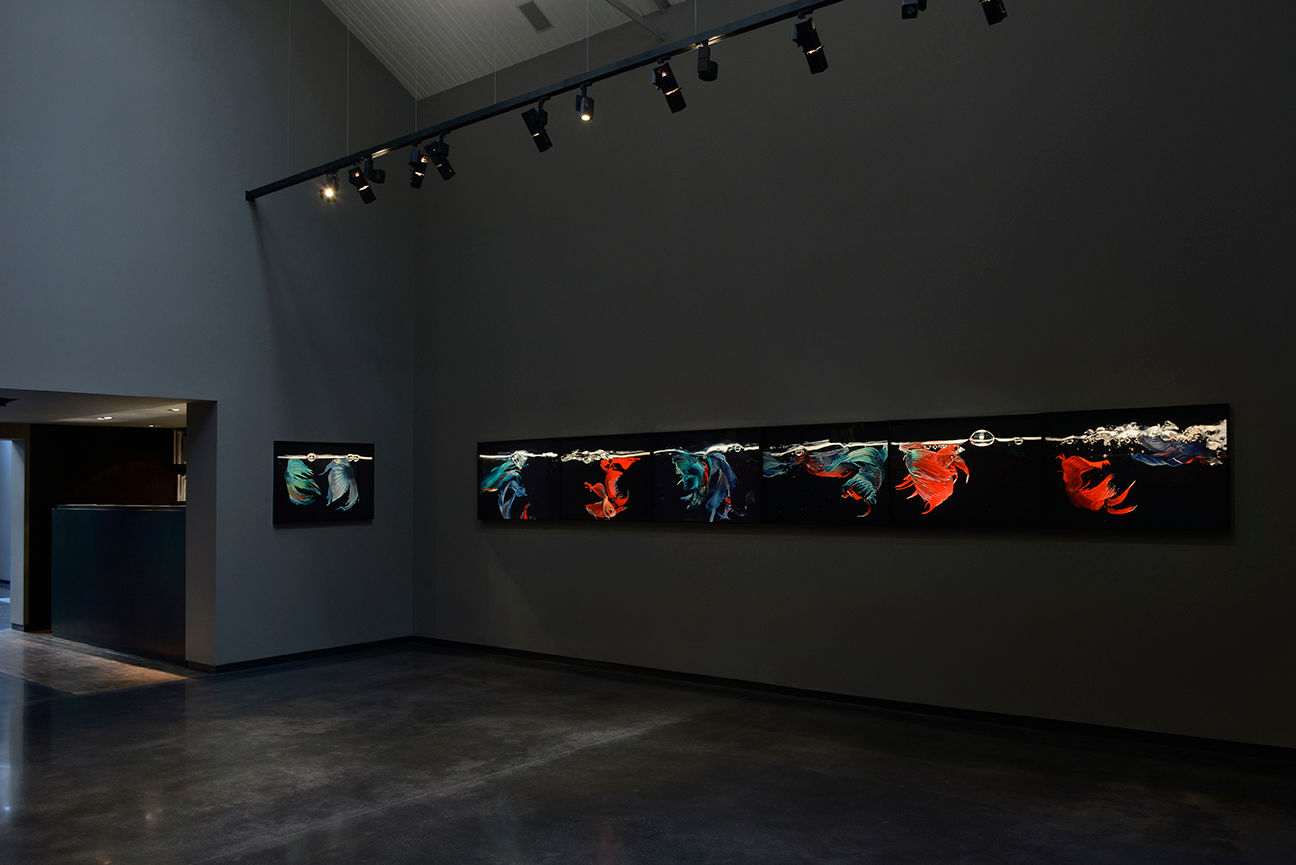 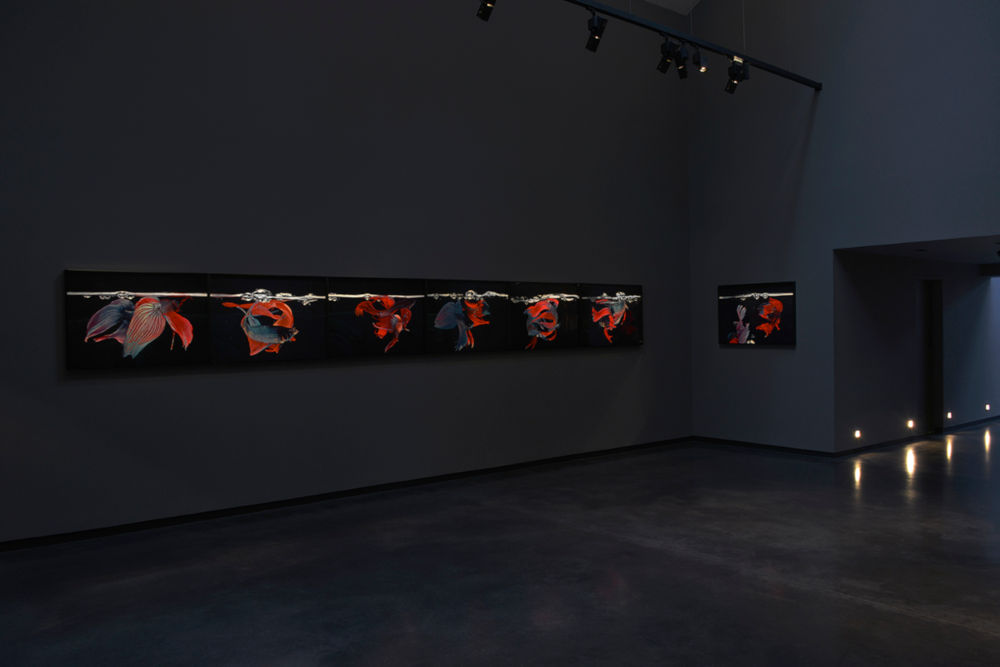 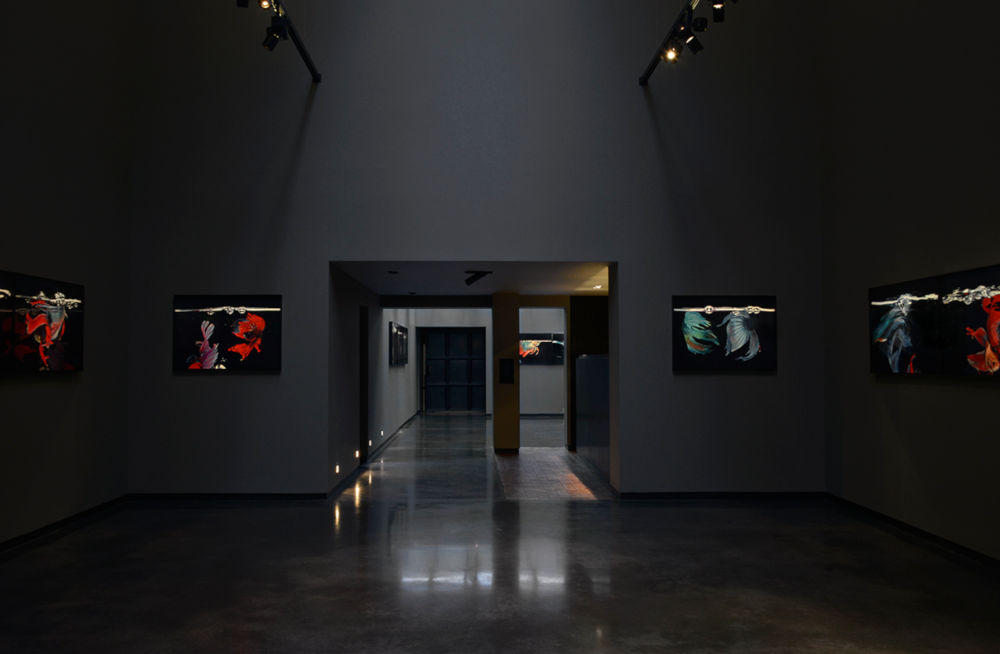 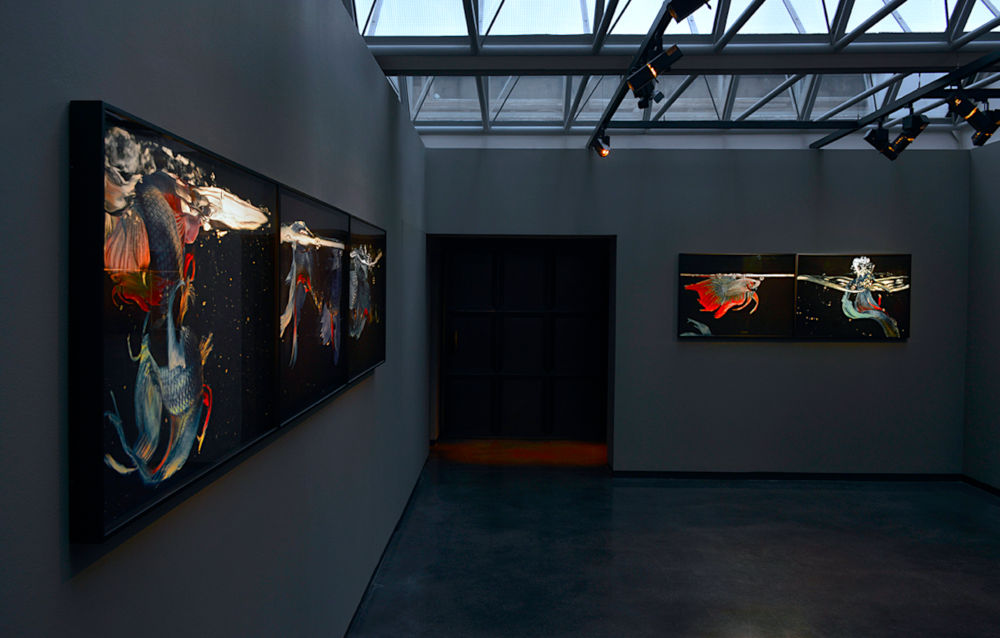 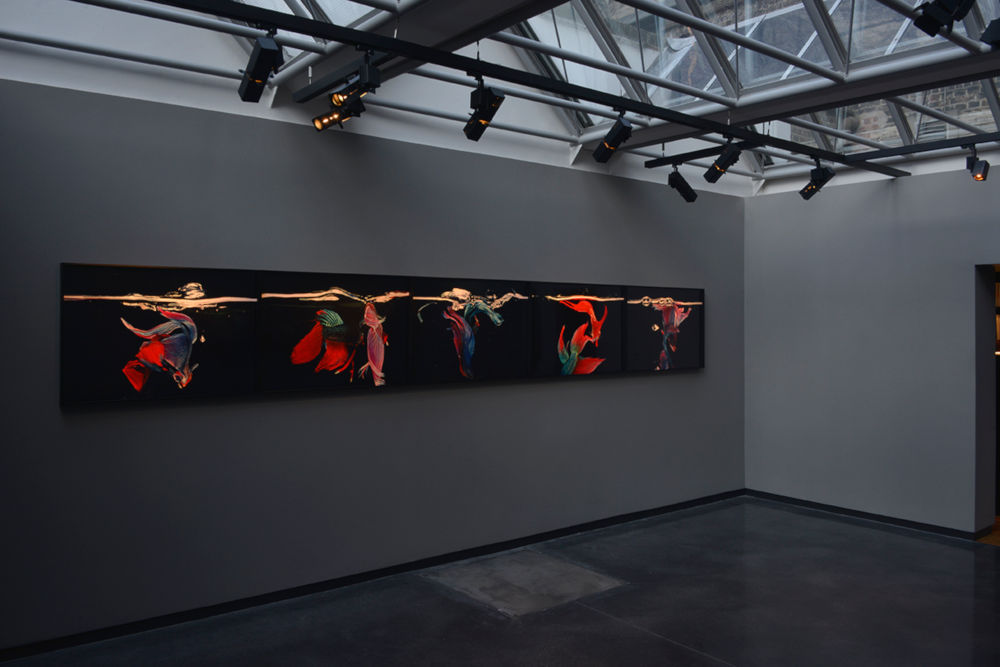 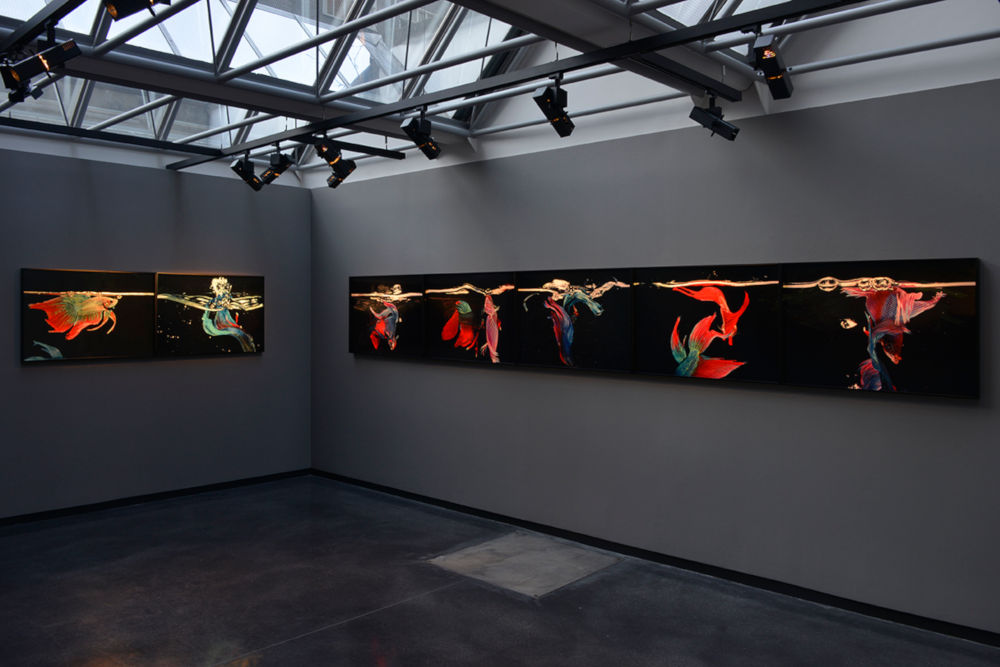 For decades, the legendary photographer Hiro has become highly regarded for his fashion, beauty, still life and portrait photography for Harpers Bazaar, Vogue, Rolling Stone and many other publications. In the 1980s, as a purely personal project, Hiro photographed dazzling fighting Betta Splendens fish and powerful male game fowl. These photographs, charged with brilliant colour, violent movement, and high emotion, reveal Hiro’s genius in discovering beauty in the unexpected. In places where one could not imagine finding it. His work is characterised by surprises, abnormalities, unusual lighting, surrealism, and an astounding vision. To look at a photograph of Hiro’s is to come face to face with a picture rife with unusual lighting effects, surprising angles, juxtaposing elements and bold colours.

The Fighting Fish series comprises 24 colour images of Siamese fighting fish, which Hiro photographed in a tank in his studio, and the Game Fowl series comprises 26 black and white images. The photographs make an astonishing visual statement of the ferocity of animals. In these bodies of work, taken over ten years, Hiro marvels at the survival instincts of these creatures. As noted by Susanna Moore in her essay for Fighting Fish/Fighting Birds, the images are reminiscent of early Chinese literati paintings and eighteenth-century Japanese paintings known as the Kano school. “And especially those paintings of ink on paper by the Buddhist, Jakuchu, who was famous for his love of chickens.”

The animals react as nature tells them and thus are unreceptive to the photographer’s arrangement. The speed at which the animals engage in their fighting causes them to become indistinguishable from one another. Before a fight, the animals are particularly magnificent – the colours of the fish vivid, mouths open, gills expanded, eyes bulbous, undulating fins and tails falling victim to deadly bites from the opponent. The birds warrior-like. “The photographs are provocative. The emotionless, monochromatic cocks and the sensual fish are emblematic and even illuminating. Nature, in the end, whether it manifests itself in the seductive display of beauty that in the fish is both solemn and gaudy, or in the cold workaday belligerence of the rooster, will always have its way. Nature is unsentimental…so too are these photographs…One does not feel pity or revulsion looking at them, but a kind of humble recognition… We are not the fish. But we are, as are the fighting fish…governed by our own dance of survival.” (Susanna Moore)

Known for the originality of his photographs, Hiro’s photographic career began at Harper’s Bazaar in New York as a fashion, still-life and portrait photographer. Shortly after arriving in America from Japan in 1954 with his memories of China, where he spent most of his childhood, and Japan, both of which have a place in the genesis of his work, Hiro landed an apprenticeship in Richard Avedon’s studio. Avedon soon sent Hiro to legendary art director Alexey Brodovitch after he proved too talented not to work independently, and within a few years Hiro had risen to extraordinary fashion photography heights. Hiro began working under Brodovitch’s direction in 1956 and in 1963 he became the only photographer under contract at Harper’s Bazaar, a position he kept for the next ten years. Now in his 80’s, Hiro continues to take assignments with the magazine. Richard Avedon described Hiro as ‘a visitor all his life’, enabling Hiro, neither completely Eastern or Western, to document both cultures in his work with a perception that only comes from a certain detachment.

Explore from the comfort of your own home - Hiro: Fish and Fowl @hamiltonsgallery London Hiro is no ordinary man. He is one of the few artists in the history of photography. He is able to bring his fear, his isolation, his darkness, his splendid light to film - Richard Avedon click the link in our bio to view the exhibition in VR #360 #360art #360photo #VR #VirtualReality #socialdistancing #Hiro #Hamiltons #HamiltonsGallery #London #gallery #exhibition #art #photography #abstract #figurative #geometry #contemporaryart #modernart #seemoreart #GalleriesNow #lifestyle #ID17540

Hiro: Fish and Fowl @hamiltonsgallery London “Hiro is no ordinary man. He is one of the few artists in the history of photography. He is able to bring his fear, his isolation, his darkness, his splendid light to film” - Richard Avedon until Friday 17 April click the link in our bio for more #firstlookart #mustsee #Hiro #Hamiltons #HamiltonsGallery #London #gallery #exhibition #art #photography #abstract #figurative #geometry #contemporaryart #modernart #seemoreart #GalleriesNow #lifestyle #ID17540