„Paint is poured and splashed onto a surface and then smeared, pulpy color mass is smeared upon the picture. The painting process becomes a real happening. Theatre occurs on the perspective plane. I always say that the painting of the O.M. Theatre is the visual grammar of my theatre on such a surface. The intrinsic action, the intrinsic action theatre leaves the places of refuge of the painting itself and goes beyond space to total reality.“ 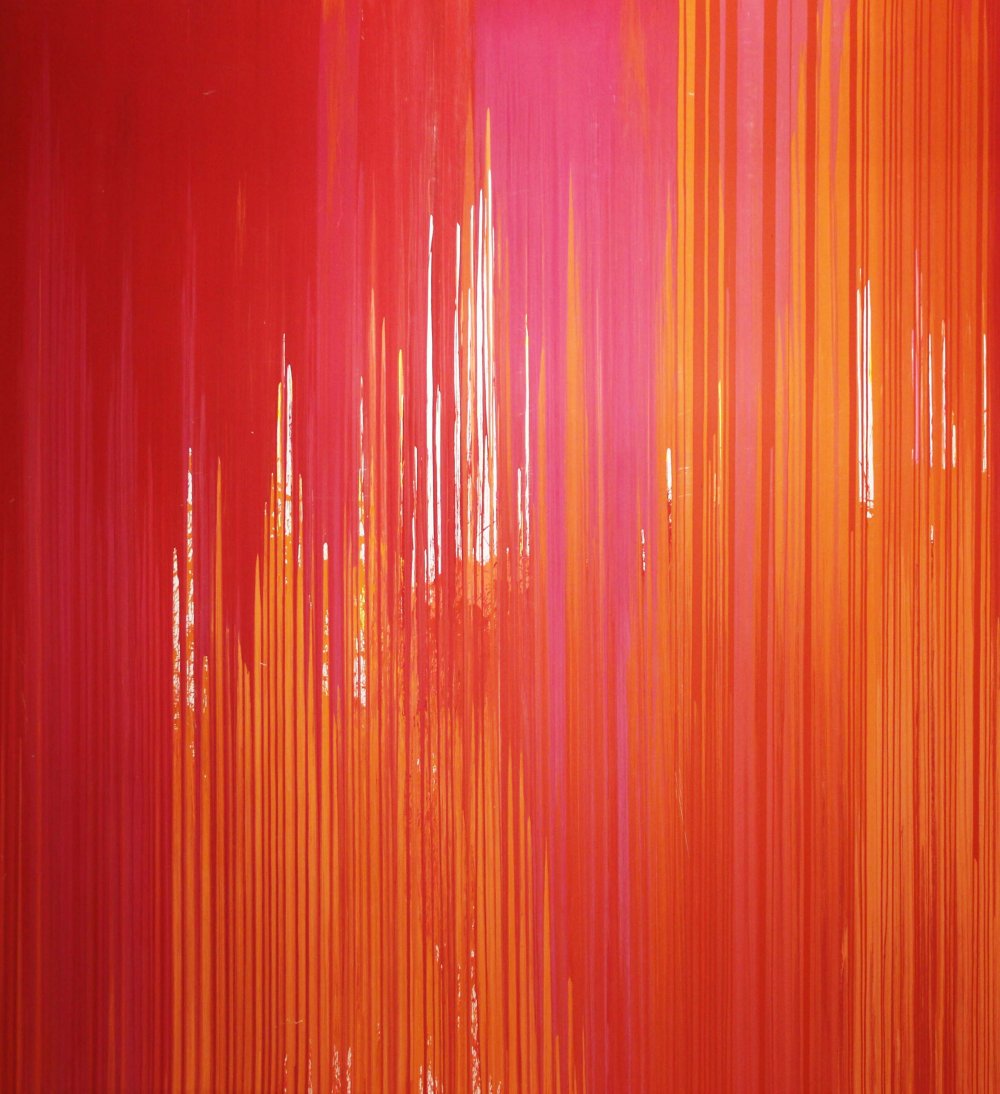 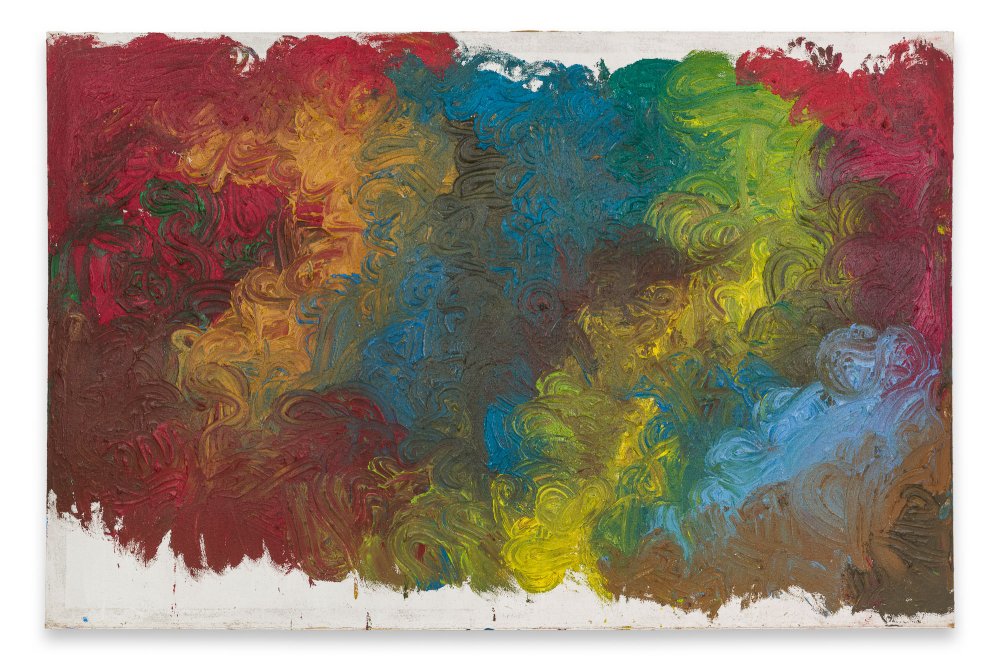 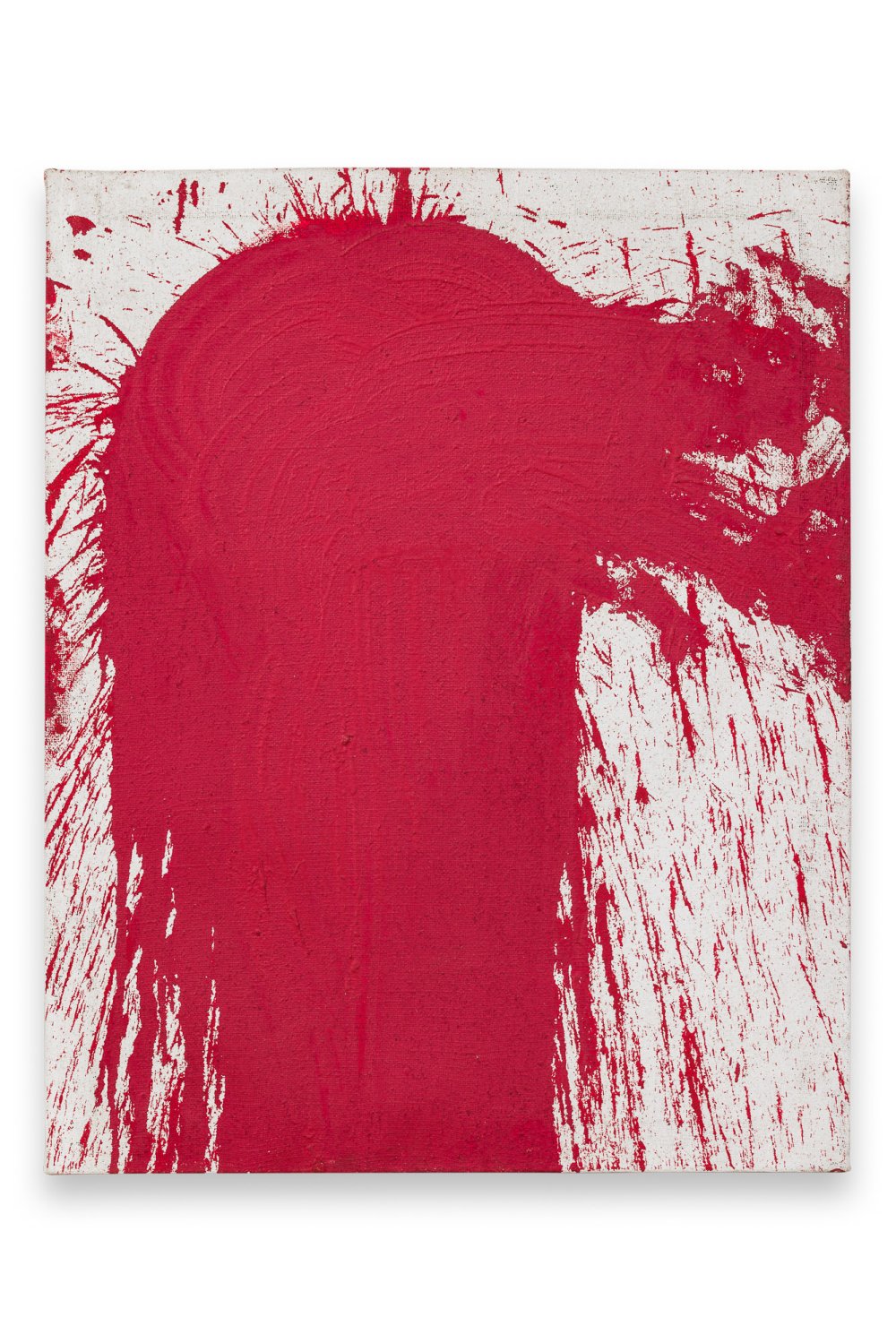 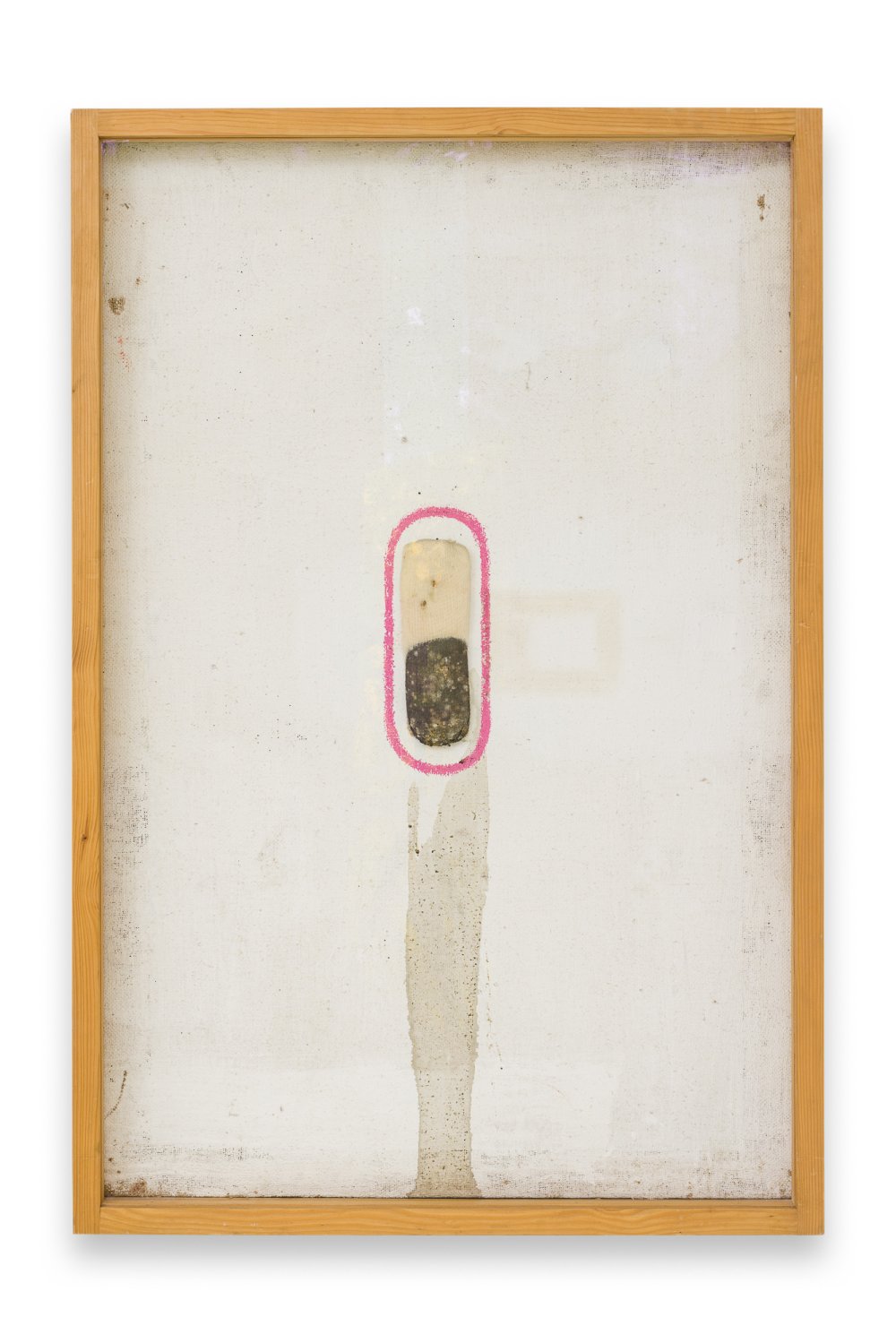 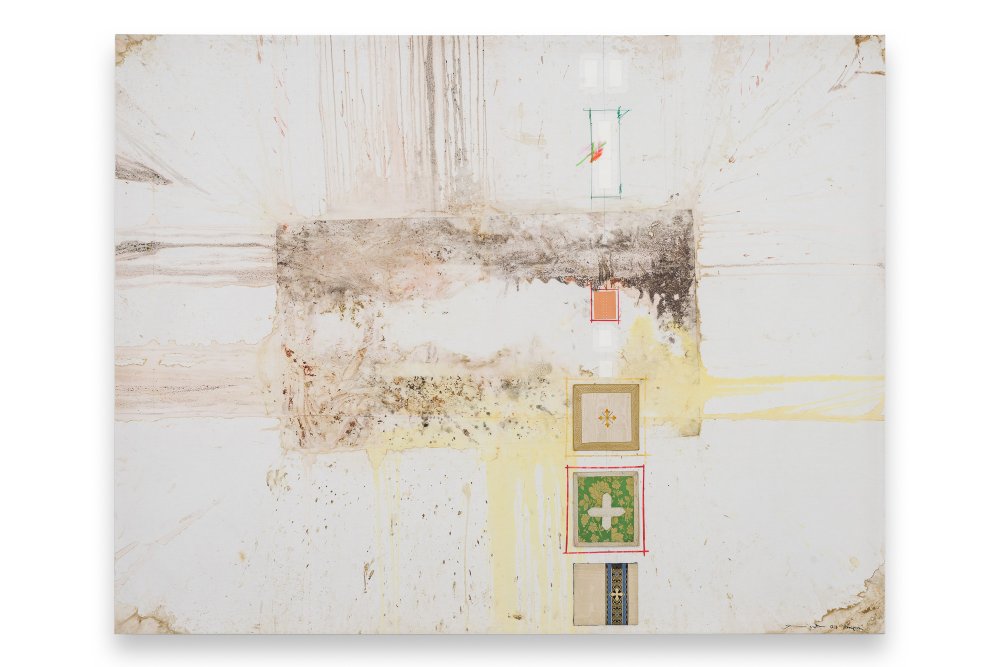 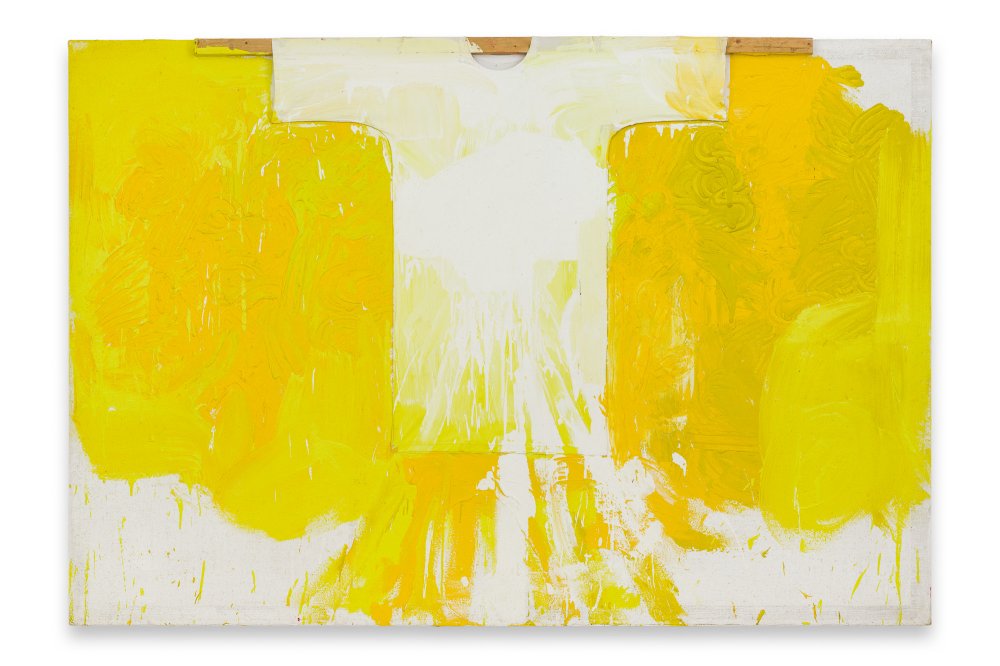 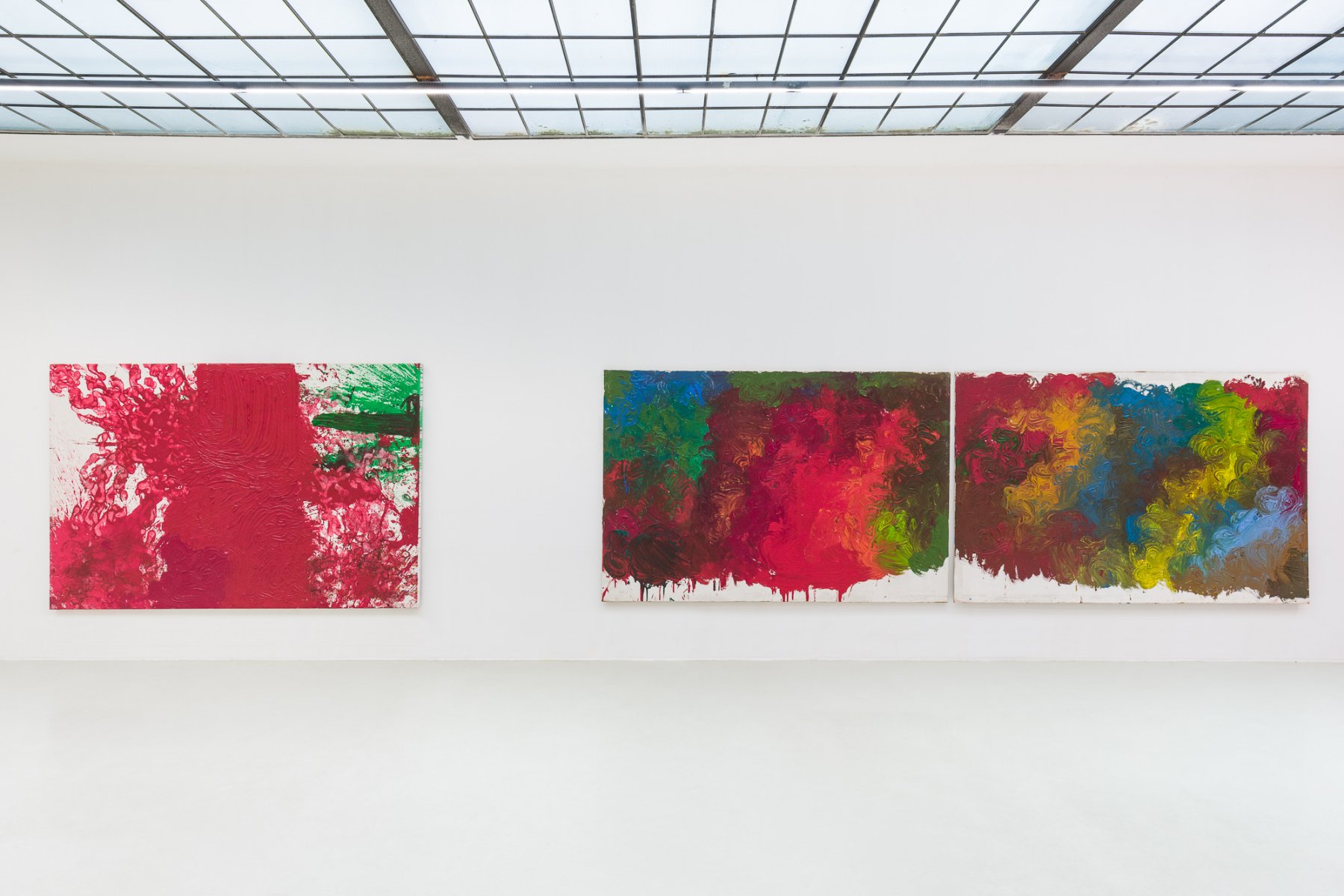 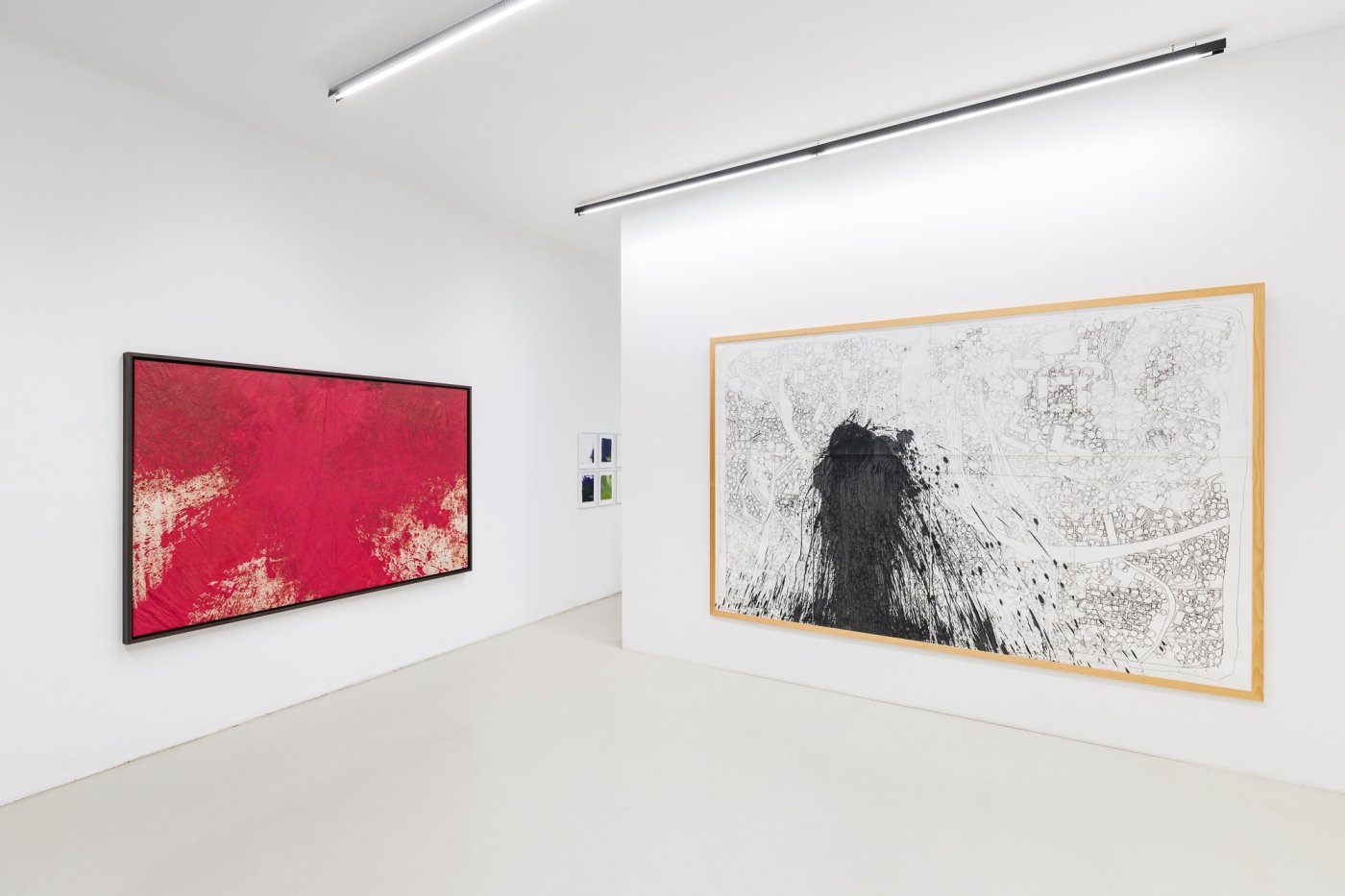 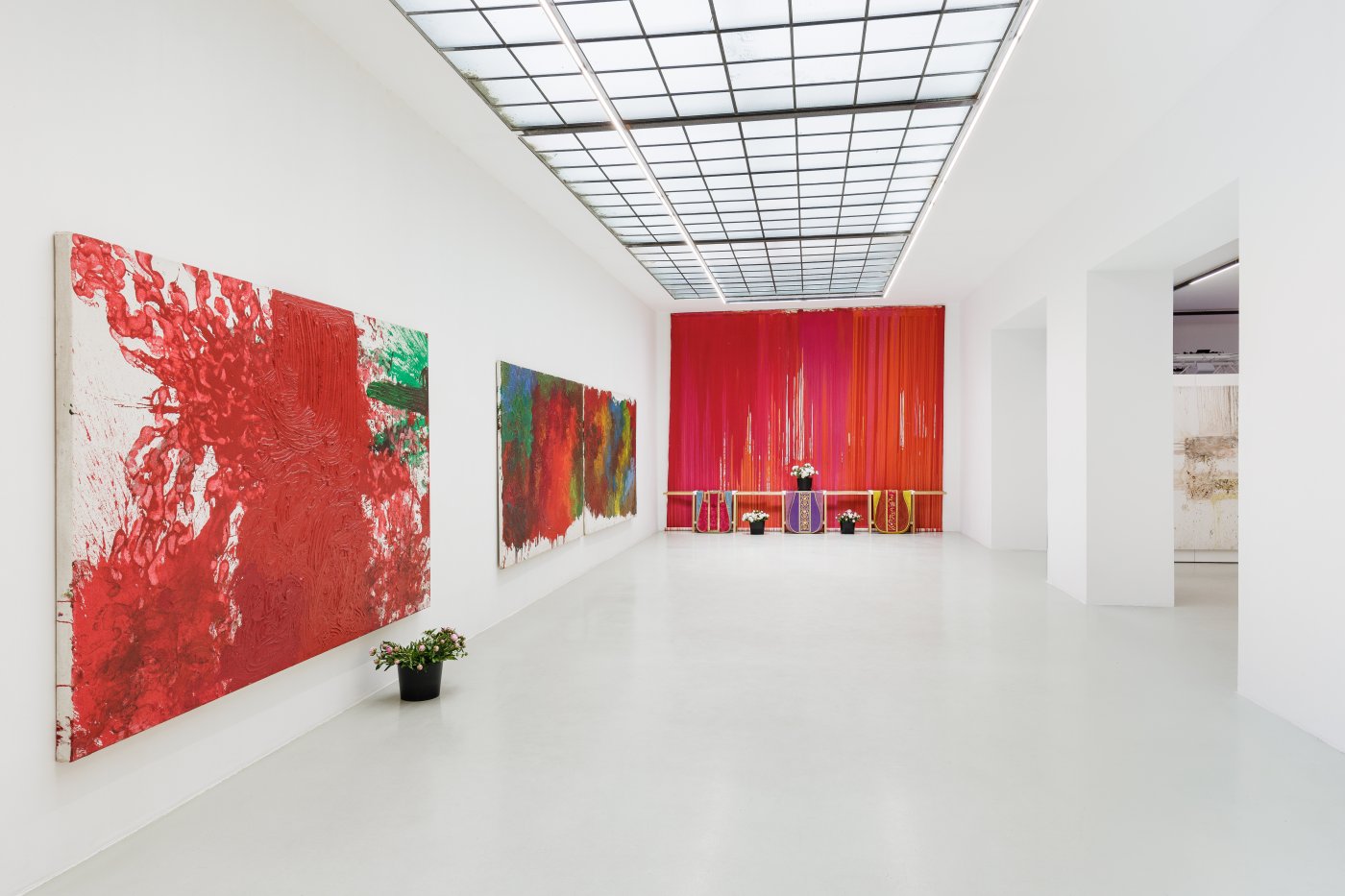 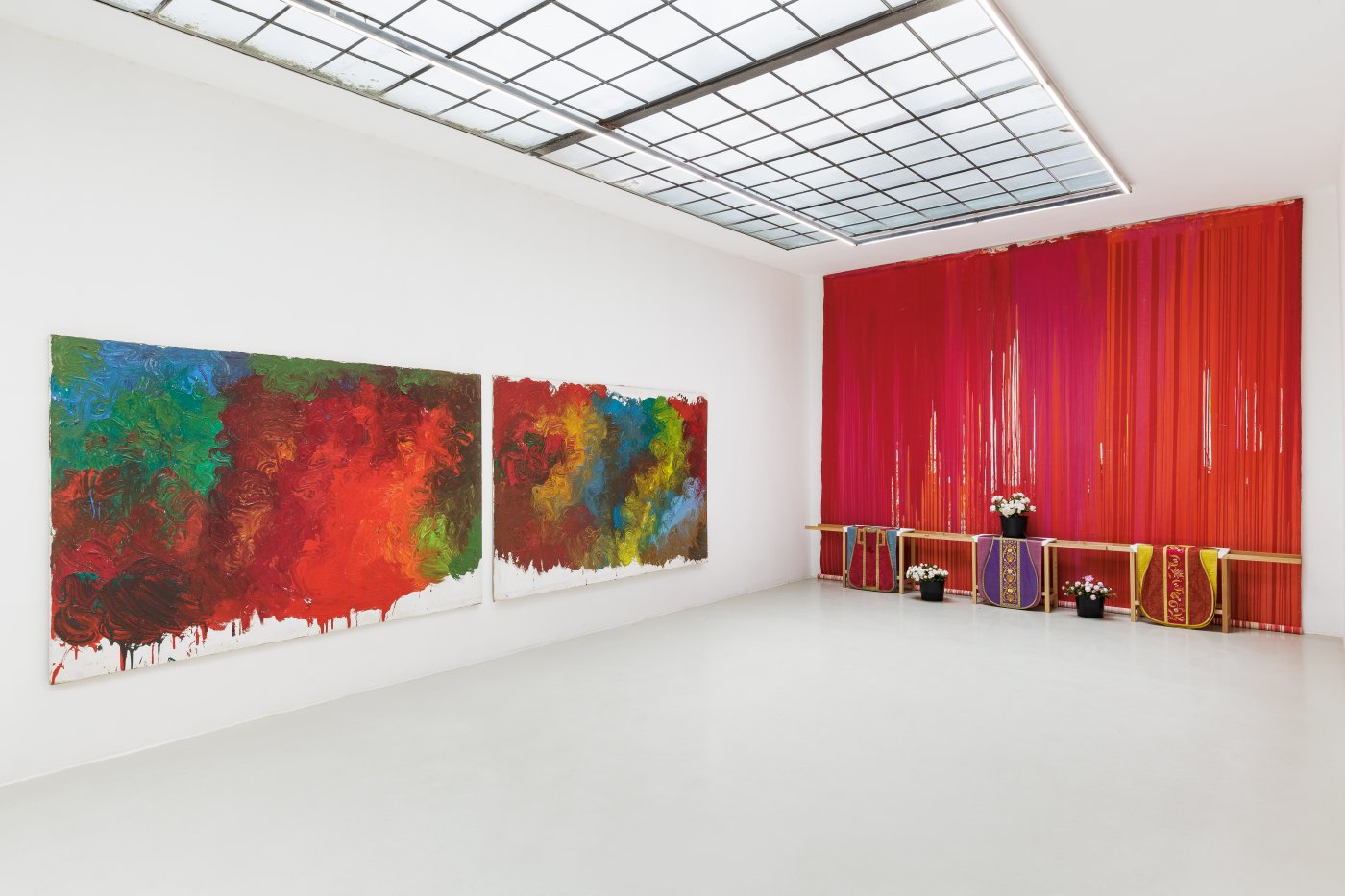 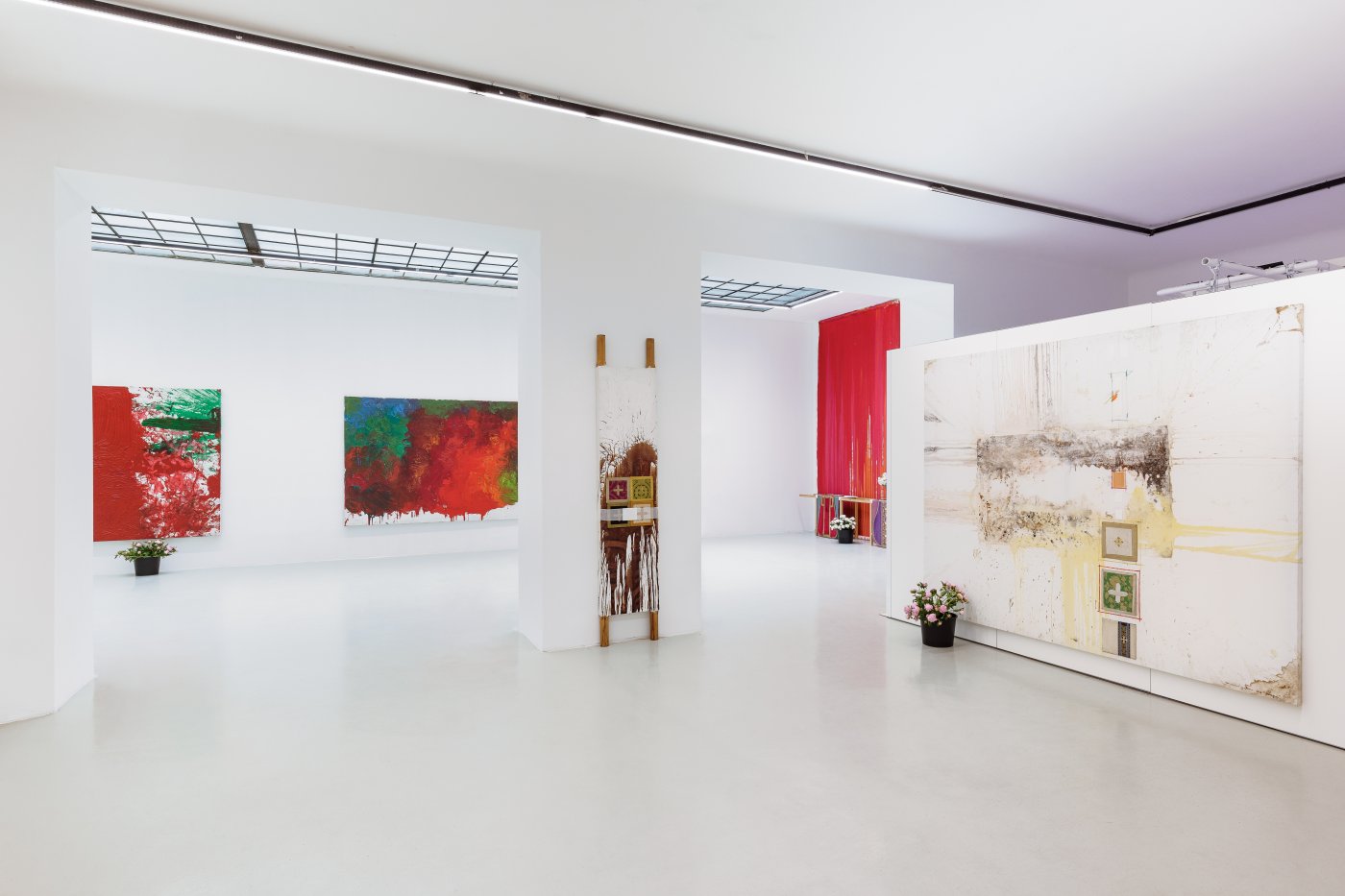 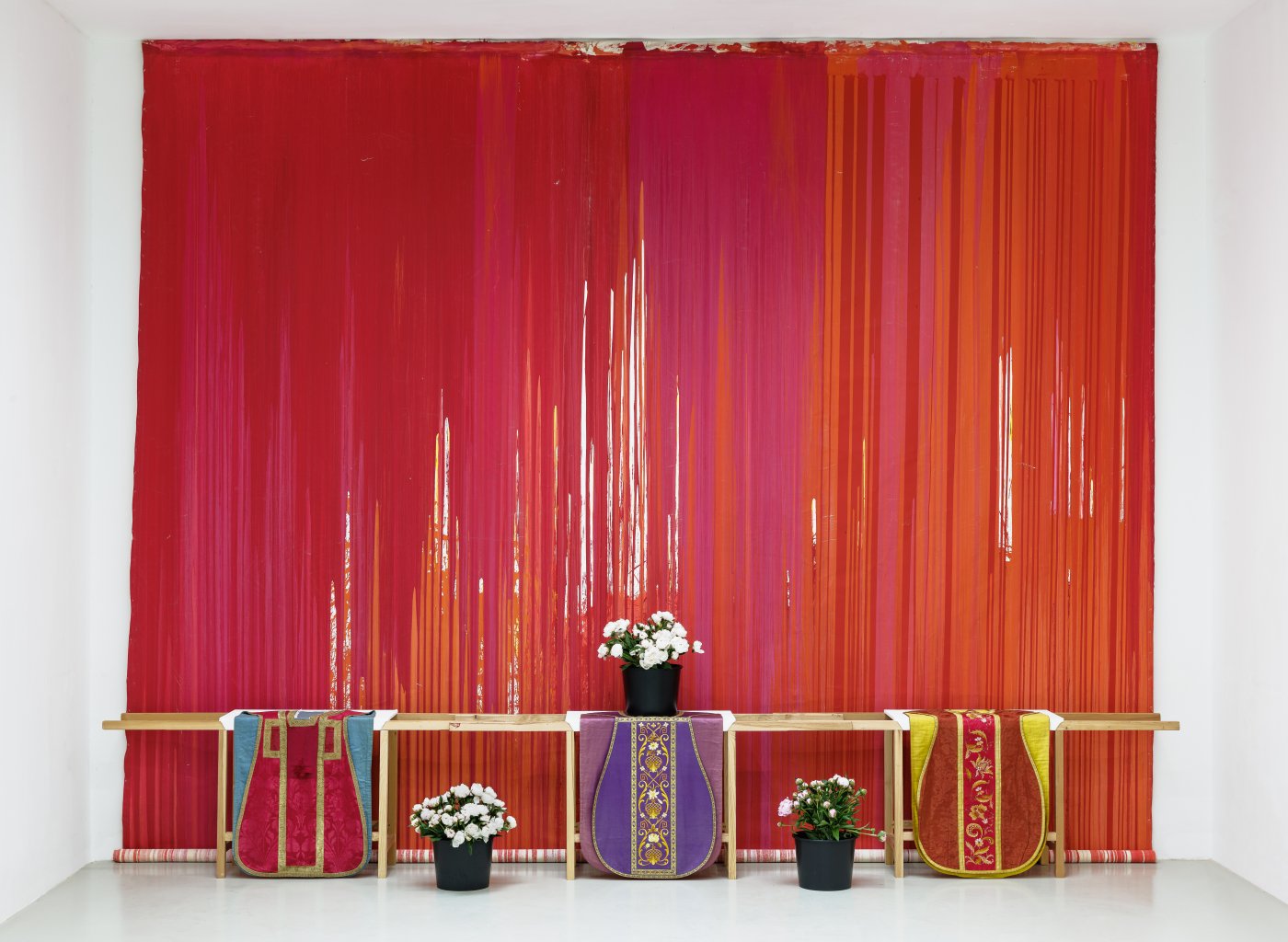 Beginning in 1960, the artist’s first painting actions took place, which already sought to realize the idea of a theater of orgies and mysteries. The actions, which revolved around the intense sensory experience of various substances and liquids, became increasingly provocative in the years to come. After scream and noise actions conceived as abreaction plays, Nitsch undertook the dismemberment of lambs, which led to further actions involving meat. After the theater was a resounding success in the U.S. and Germany in the late 1960s, Nitsch performed numerous actions in European and North American cities in the 1970s. In 1971, Nitsch was able to purchase Prinzendorf Castle in Lower Austria from the Catholic Church. The purchase, enabled him to now realize his musical ideas for theater in large-scale action performances. Noise orchestras, screaming choirs and electronically amplified instruments played a role.

Highlights of Hermann Nitsch’s projects are the three-day theater piece of 1984 in Prinzendorf or the cycle of Schüttbilder created in 1987 in the Vienna Secession. In addition, in 1998 the realization of his Orgies Mystery Theater took place in the form of a 6-day play. 24 years after the original realization, this summer the Gesamtkunstwerk will be performed again as a concentrated version in a performance of the 1st and 2nd day. The performance will take place on July 30 and 31. The setting for the action is the castle complex in Prinzendorf with all its rooms as well as the surrounding landscape of the Lower Austrian Weinviertel.

Since the 1990s, Nitsch’s art has been increasingly honored in a series of exhibitions, often accompanied by performative actions by the artist. Of particular importance are the two major retrospectives at the Essl Collection (2003) and the Gropius Bau Berlin (2007), as well as the tribute to Nitsch through an exhibition at the Albertina in Vienna (2019).

Hermann Nitsch lived and worked at Prinzendorf an der Zaya Castle, Lower Austria, and in Asolo, Italy. His works are exhibited in the two Nitsch Museums in Mistelbach and Naples as well as in the Nitsch Foundation in Vienna and in renowned international museums and galleries.

The artist’s credo was: “my work should be a school of life, perception and sensation and should be experienced with all five senses”. In this sense, the exhibition at Galerie Kandlhofer is dedicated to the presentation of diverse works from different creative phases, which invite the viewers to experience his art with all their senses by incorporating interactive methods. The works on display include works from the Bayreuth Walküre, New und Historic Works (1960 – 2022), Graphic Works, as well as the installation of a synesthesia room that encourages a sensory experience.

Nitsch possessed the gift of synesthesia: he heard colors, saw sounds, combined painting and literature, music and architecture, movement and stillness into one event, which can be experienced in the installation of the synesthesia room at Galerie Kandlhofer. The installation invites you to surrender to the play of colors in the paintings, enveloped by the music. The mono-typtichonal work shown in the gallery preserves the visual simultaneity of the four projectors experienced in the video room through their packaging, and from this again distils references to meaning and image.

During an action, tools that Hermann Nitsch defines in his scores, for example cotton cloths, stretchers, shirts, stained with blood or splashed with paint, regardless of their later use as objects for an exhibition. These former utensils in the scope of the O.M.Theater are now moved into the gallery space as relics and relic paintings, demonstrating traces of the ecstatic painting process.

The New Works from 2018 – 2020 surprise with a generous color palette of bright tones, with intense cluster and relief-like feel. The presented works captivate with new, luminous compositions inspired by spring flowers. Just as Nitsch aspired to a music of the spheres in his music, he clustered the light of colors in his painting.

In the summer of 2021, Nitsch accompanied a concert version of Richard Wagner’s Die Walküre with works designed especially for the Bayreuth Festival. For each of the three acts, the artist conceived an extensive painting action, which was transformed into bright colors scene by scene at the score with the help of ten painting assistants. Over 1000 liters of paint were spilled per performance. The resulting floor and wall paintings are considered the basis for the overall installation. The works on display at Galerie Kandlhofer are some of the wall rubble paintings designed for the Bayreuth Festival.

The drawings and prints are also inseparably connected with the oeuvre and represent immediate parts of it. Since the 1980s, Hermann Nitsch has been working in the graphics field and created an extensive oeuvre. Since 1991, Hermann Nitsch has been working together with Kurt Zein. This period is marked by the impressive extension of technical printing possibilities which, of course had a significant effect on the results. They are produced in an elaborate process in various steps. The printing is done, for example on originals, on laid paper, on sheets of paper which have been individually splashed with blood or painted in Aktionist style. In the printing process, the colours are altered on each sheet and always precisely coordinated; some plates are superimposed in a complicated procedure. The latest monumental work in the field of graphics is the large-format, Hebrew-German art book LEVITICUS, which Hermann Nitsch published in collaboration with Har-El Publishers (16 copies). It refers to the third book of Moses, which describes the sacrificial rituals in the Temple of Jerusalem. The work is accompanied by twelve terragraphs (screen prints with sand), with a surface structure similar to that of the splatter paintings.