Hassan Hajjaj: A Taste of Things to Come

Hassan Hajjaj: A Taste of Things to Come

Barakat Contemporary presents A Taste of Things to Come, a solo exhibition by Hassan Hajjaj. 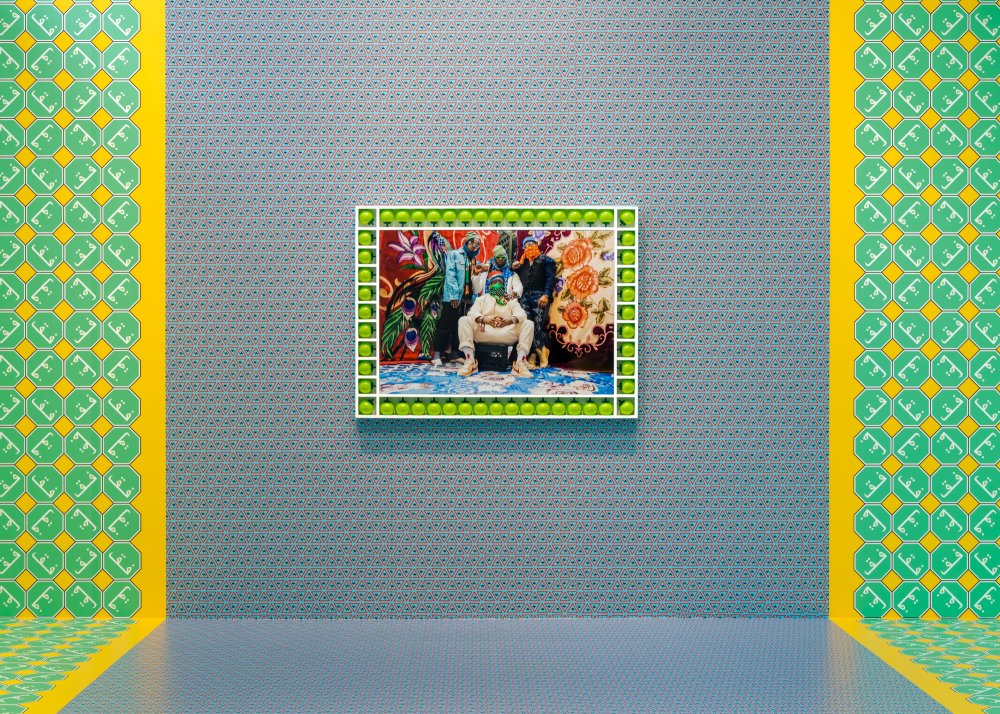 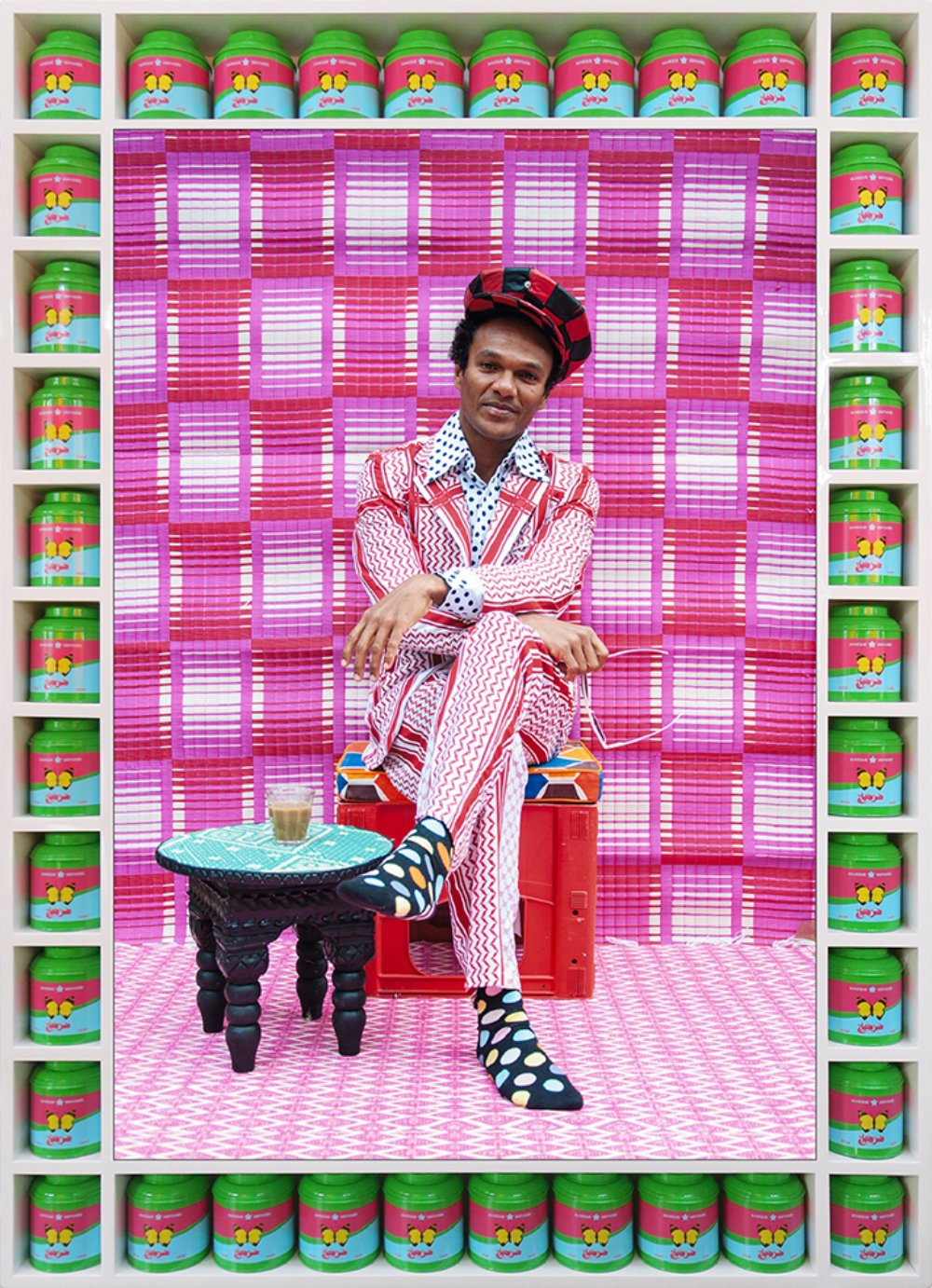 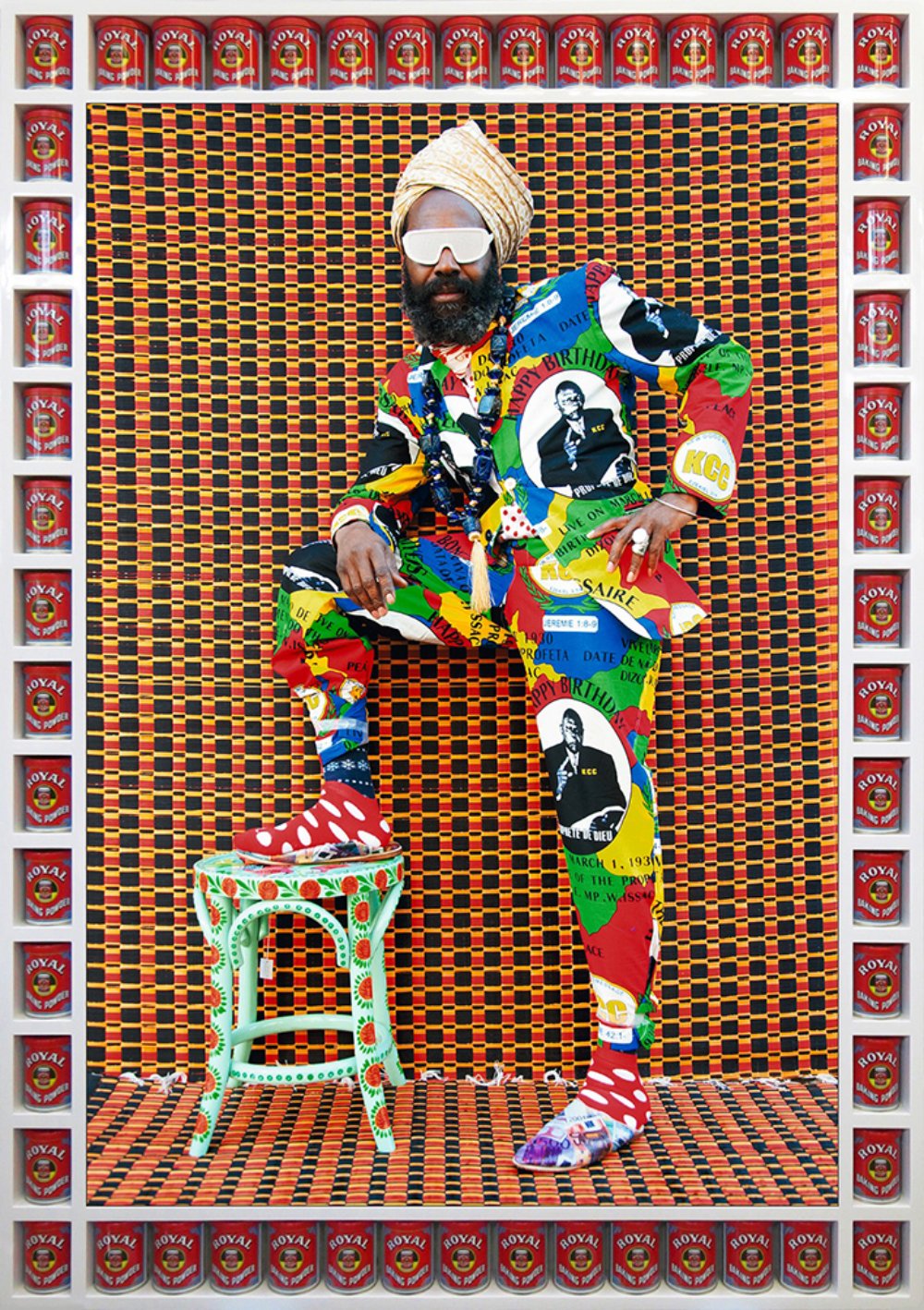 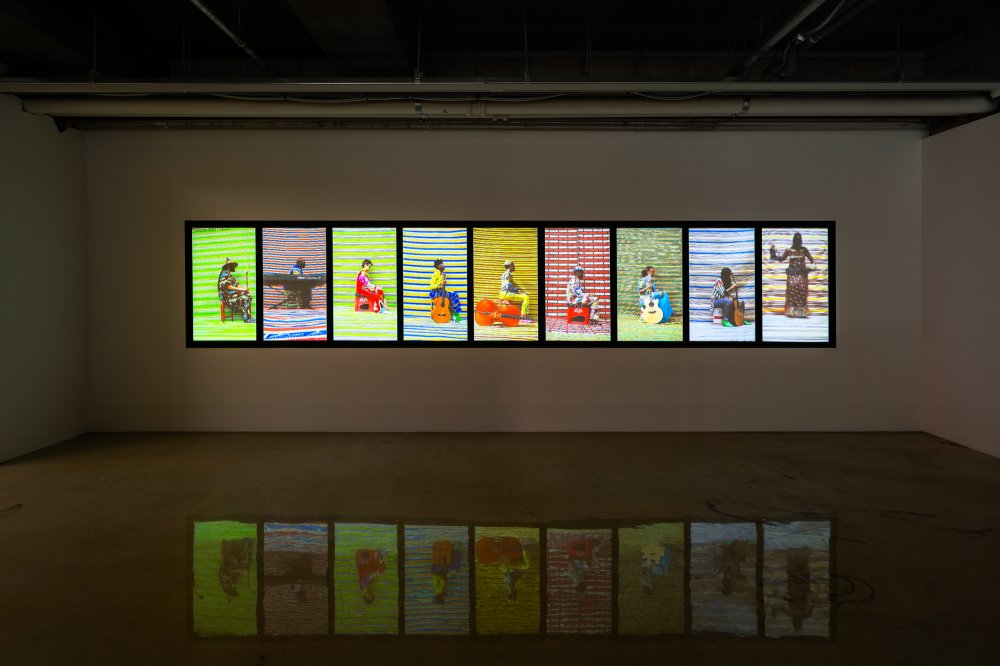 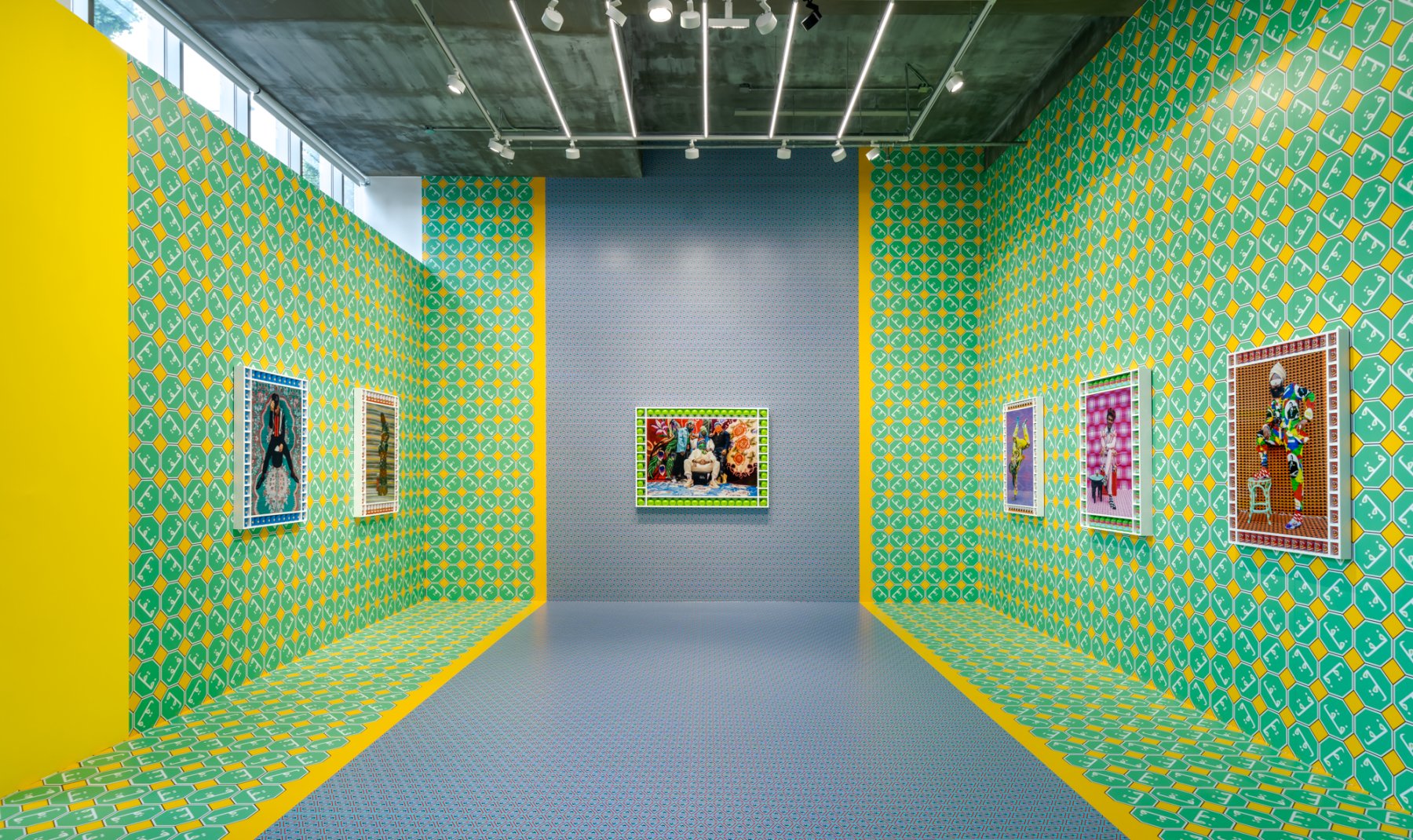 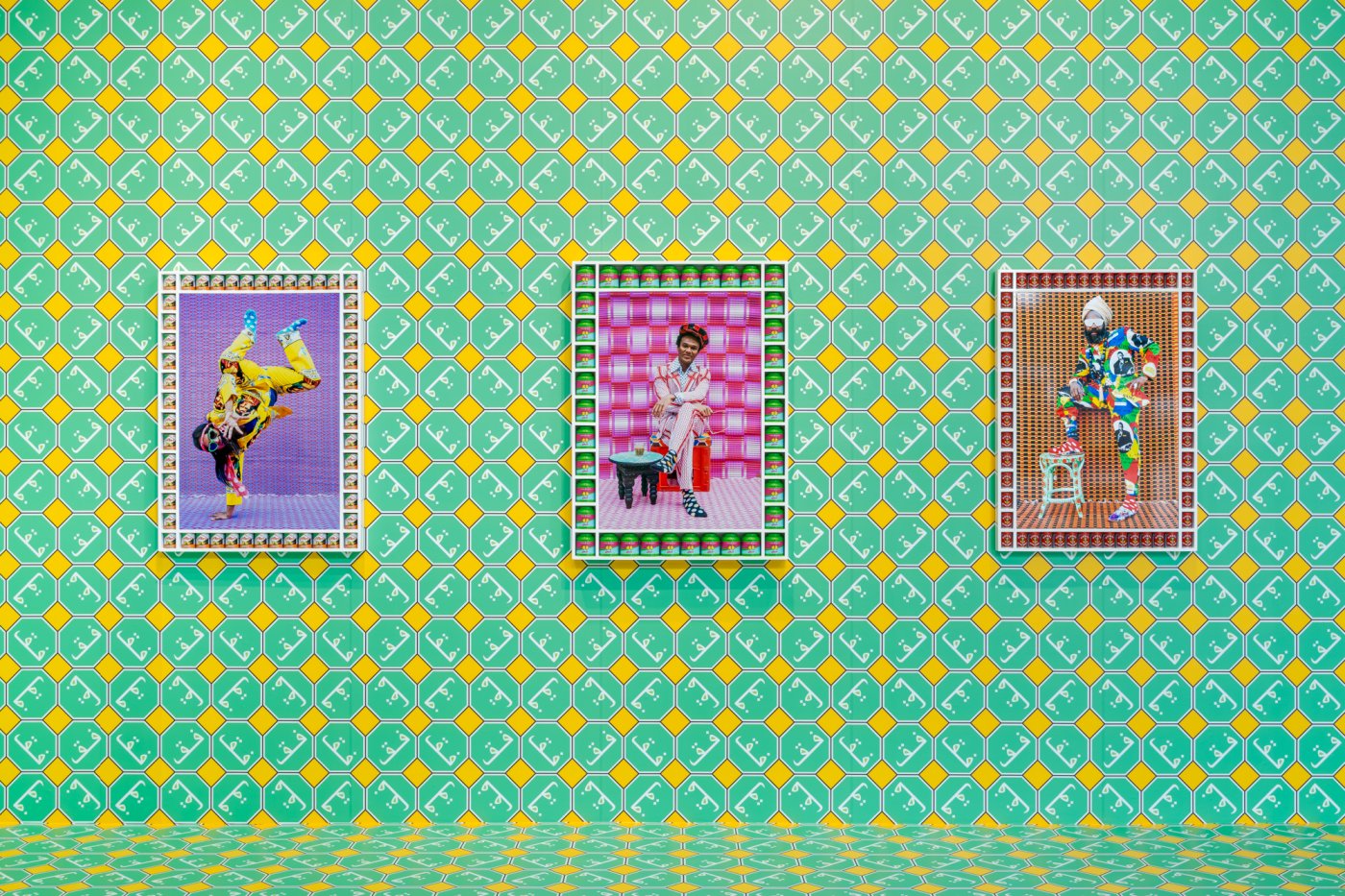 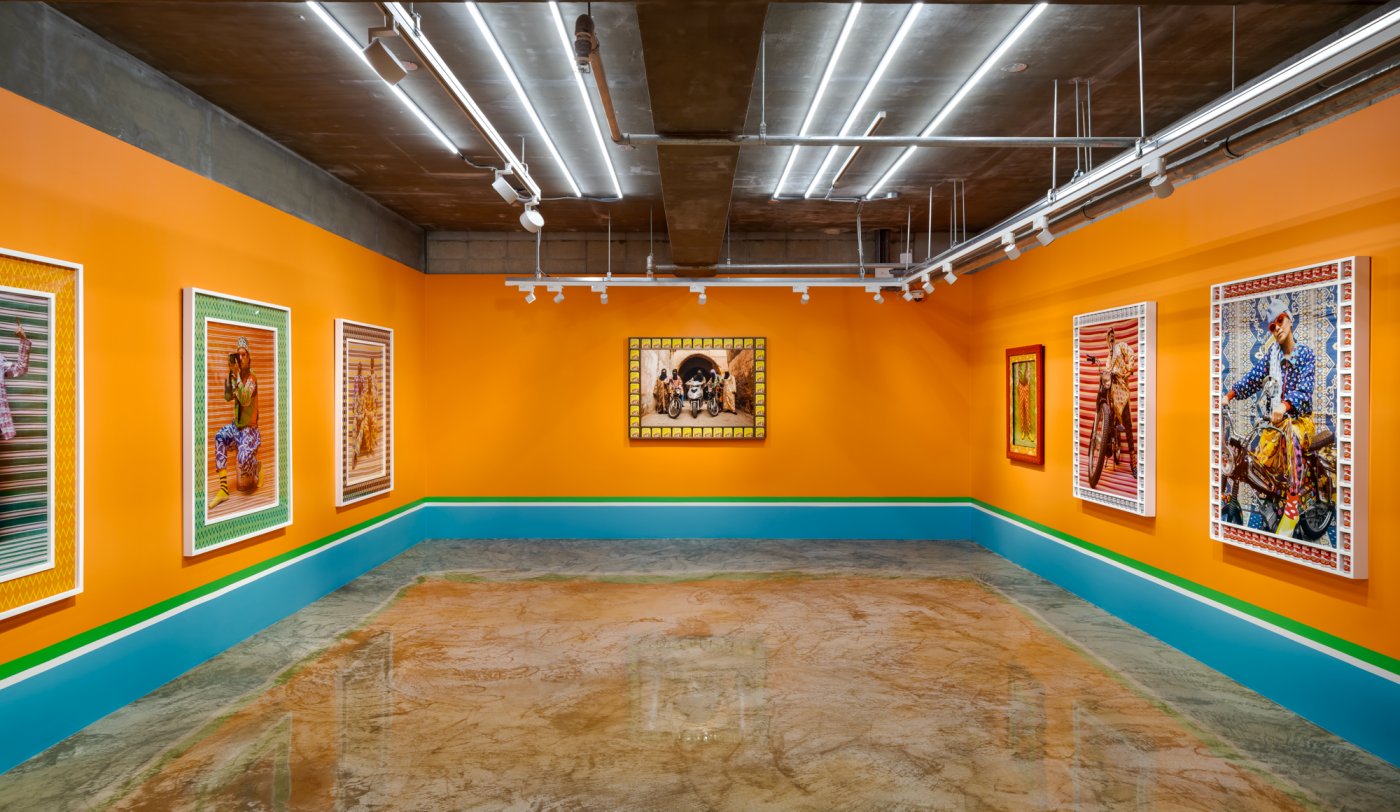 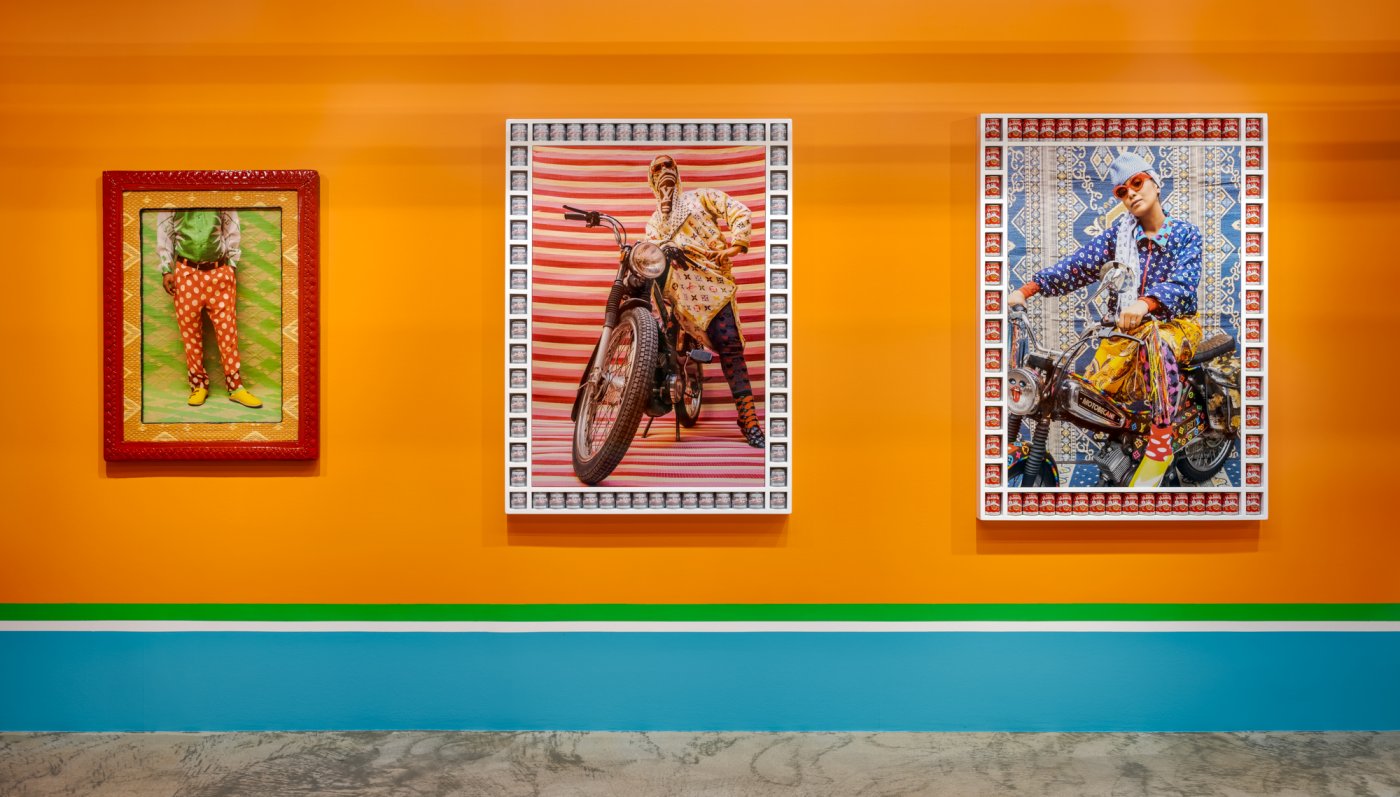 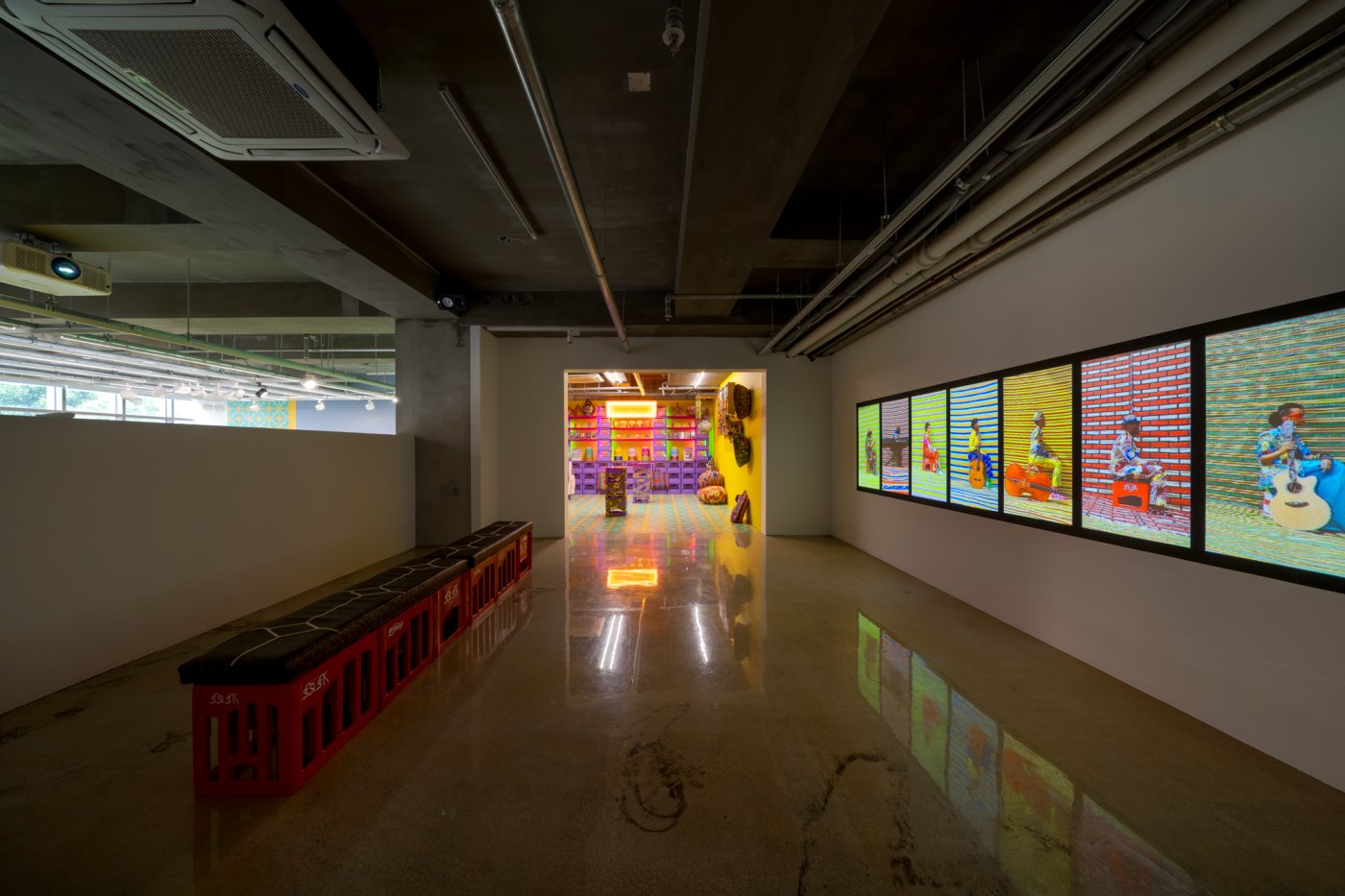 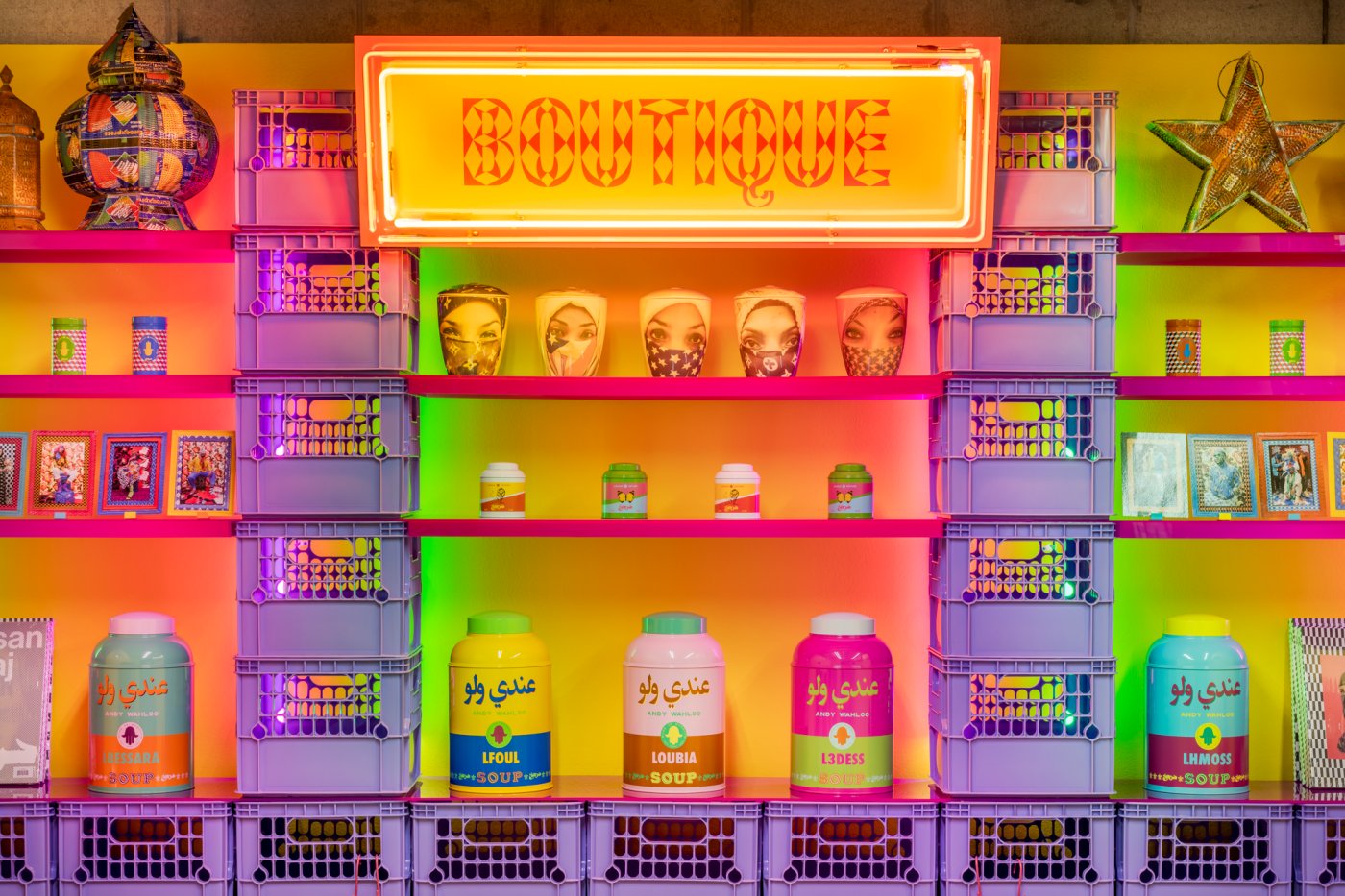 The message of A Taste of Things to Come offers an excellent illustration of Hajjaj’s inclusive worldview, which urges us to care for one another as we proceed through the current moment of global change faced by humankind, looking at the future from a perspective that is constructive and positive. Through his artistic body of work, he strives to convey the importance of communicating and sharing diverse cultural tastes.

Born in Larache, Morocco, in 1961, Hassan Hajjaj moved to the UK with his family in his early teens. As an artist, he has worked chiefly in the medium of photography, traveling between Morocco and the UK. The Britain of the 1970s and 1980s was a cosmopolitan country where Hajjaj faced numerous issues as a second-generation immigrant—confusion over his identity, the language barrier, racial discrimination, and economic marginalization among them. At the time, young artists within Britain’s Afro-Caribbean and Asian communities were beginning to establish their own unique cultures, drawing inspiration from the vibrancy of a global city as they sought alternative ways of living, fashion, art, and so forth. Eluding societal controls, they would organize street exhibitions, “guerrilla bars,” nightclubs, and pirate radio stations. Hajjaj, who had no formal training, gained experience in multicultural artistic settings that he naturally encountered while living in the vast cosmopolitan city of London, such as street music, fashion, and interior design.

Hassan Hajjaj’s artistic vision today has been strongly influenced by a creative spirit and sense of rebellion toward Britain’s mainstream culture. In the late 1970s, he launched the brand Real Artistic People (RAP), while spearheading a Black alternative culture in the UK with a nightclub where visitors could enjoy Black genres of music like hip hop and reggae. He first truly began his work in photography in the late 1980s amid his frequent travel to Morocco, the country where his roots lay. He saw the ways in which the Moroccan photography world at the time approached its own people and places from an “exotic” Western perspective. Hajjaj was able to observe this both because of his awareness of African minority communities and because of the “subcultures” and “alternative cultures” that he had established in England to provide a recreational culture for them. As a way of demolishing Western preconceptions of North African culture, he began developing works of photography, video, and performance that truly placed Africans in the foreground. Serving as a bridge between Europe and Africa and a source of necessary workers for the Western textile industry, the Morocco of the 1990s was a unique setting where European and North African cultures coexisted in hybrid form. Owing to its geopolitical status, it was home to affiliates of renowned Western clothing and accessory brands—whose characteristics Hajjaj began incorporating into his artistic work. The designs for the famous brands and logos that often appear in his images—Louis Vuitton, Gucci, Nike, and so on—were produced by collecting the knockoff and defective items that are easily available in Moroccan markets. Created by blending North African roots with popular culture in ways that may appear contradictory or random, Hajjaj’s cultural composites seem all the more natural coming from a Briton who also identifies as African and Arab.

With their offhandedly splendid colors, patterns, and designs, Hajjaj’s images lend themselves easily to being interpreted within the category of Pop Art, but they encompass a far more complex and diverse blend of social and cultural layers. This is a pronounced quality of his portrait photographs, which boast creative framing that combines the powerful, rhythmic colors and patterns of North Africa with figures adopting idiosyncratic poses, as well as commercial objects found in Morocco including drinks, canned food, playthings, recycled tires, and matchboxes. The various products combined in his camera’s frame are not simply decorations; they are reinterpretations of traditional Moroccan mosaic patterns and tiles based on the artist’s own perspective, with products often chosen from those produced in the model’s country and a certain sense of humor reflected in terms of the model’s personality or profession. For example, Hajjaj’s first portraits used canned chicken to characterize female models referred to in slang as “chicks,” while cans of beef were used for “beefy” male models. The latest exhibition includes works from some of the artist’s most representative photography series—such as My Rockstars, Kesh Angels, Dakka Marrakchia, and Legs— along with the video work My Rockstars Experimental II. The My Rockstars series in particular is a record of people that Hajjaj met while operating pop-up photography studios on the streets of Marrakesh, London, Paris, and Dubai for over a decade. A diverse range of people appear in the series’ images—from famous entertainers to underground musicians, henna tattoo artists, fashion designers, hip hop dancers, martial artists, and cooks. All of them sources of artistic inspiration to Hajjaj, they each follow their own unique lifestyle and path. Within his work, new stories are created for artists working in different realms of life—from Ghetto Gastro (2018/1440), which captures a chefs’ collective working in cooking, design, and art in the Bronx, to the British fashion designer/musician/photographer in Blaize (2013/1434), the Afro-Brazilian dancer/choreographer/acrobat Rilene (2013/434), and the Malian traditional musicians in Songhoy Blues (2014/1435). My Rockstars Experimental II is a video featuring songs, dancing, and other performances by the artists in the My Rockstars photography series. A work of comprehensive art combining music, fashion, installation design, and performance, it places musicians in nine different frames as they sing, rap, play transitional instruments, and belly-dance. It offers an excellent illustration of the artist’s attempts to experiment with different media as each of the photography subjects appears in vividly moving images.

Other leading series by Hajjaj include Kesh Angels and Dakka Marrakchia, which offer clever twists of Western clichés regarding Arab culture. Women hold an important place in these series:
the women who appear in the works wear hijabs and sit on motorbikes in Morocco’s narrow side streets. Their faces veiled in the images, they wear caftan dresses with leopard and camouflage prints. As they stand before the camera, they stare into its lens— not as secretive, passive presences, but with bold and cynical poses. Hajjaj’s camera presents its figures in bold and vibrant ways, applying the kind of shot-from-below compositions seen in fashion magazines, hip hop, and martial arts performances. The works in these series, which date back as far as the early 2000s, offer an excellent illustration of how deeply engaged the artist is with culture and gender issues. Using the space of photography, Hajjaj deconstructs the concept of “country” to create an utterly new dimension of the world—one where boundaries of nations, borders, peoples, and cultures have been torn down, with subjects pursuing an endless affection and joy toward life. As a second-generation immigrant who lived through an era of post-colonialism, Hajjaj focuses less on representing the historical hardships of being situated between North African identity and British colonial history than on adopting this as a new societal phenomenon, sublimating his own multicultural identity and hybridity through art. The photographic spaces he captures may be seen as similar to the “in-between spaces” described by the Indian-English philosopher and cultural critic Homi Bhabha as being linked to the conditions for understanding cultural hybridity. These are spaces where one can elude the mere homogenization or imposition of cultural meaning through colonization, focusing instead on the ambivalence of different cultures and the new cultural phenomena and meanings that emerge there.

In addition to his photography and video work, Hajjaj has also produced sculptures and installations. In his travels to Morocco, the artist has obsessively collected everyday items there that remind him of his childhood: book and album covers, film posters, matches, bars of soap, cans, and so forth. To create his sculptures, he had scanned or photographed these collected items to reproduce them via digital means or as newly constructed art objects. It was from this process that his early Pop Art series Graffix from the Souk emerged. Here we see the recycling of old objects that has been a major approach in Hajjaj’s art. Recycling in daily life—making mugs out of cans or using drink crates as chairs—has been a commonplace practice in Morocco, offering an excellent illustration of its socioeconomic context. Hajjaj has adopted the characteristics of this practice in his own artistic process. The works in his Graffix from the Souk series have been produced in collaboration with Moroccan artisans, craftswomen, and African refugees. As they imbue new hope and purpose into the lives of members of the community, women, and refugees, they broaden the role of art into the social realm. To help in understanding the broad-ranging nature of Hajjaj’s body of work, the latest exhibition includes a recreation of his boutique, where visitors can view Buy Me Shelf (1997/1418)—a piece derived from Graffix from the Souk—as well as various items the artist created through the recycling of Moroccan products. The boutiques that Hajjaj operates in Morocco and the UK function as artistic settings where people can actively communicate with local artists. The boutique presented at Barakat Contemporary is an engrossing space where we can experience items of different forms and materials designed by the artist—from Moroccan lanterns made with recycled cans to a tea box produced in collaboration with a Moroccan artisan, traditional Moroccan babouche slippers combined with Louis Vuitton and Nike logos, Barbie dolls dressed in traditional Moroccan costumes, prints of Hajjaj’s photographs on recycled cardboard, and postcards. In addition, the gallery walls and floor will be covered with wallpaper designed as a contemporary reinterpretation of regional symbols such as camels and ordinary Moroccan stop signs. Through this powerful visual contrast and splendid graphic mixture, the gallery space will provide an utterly new kind of spatial and temporal experience— akin to stepping into one of Hajjaj’s works. In this one setting, visitors will be able to see the full range of Hassan Hajjaj’s artistic body of work, which crosses the boundaries of fashion, design, art, and commerce.

A Taste of Things of Come offers a meaningful opportunity to experience Hajjaj’s work through the different senses as it poetically approaches a world of constant change—an inclusive survey of the “world to come” through the medium of art.

Hassan Hajjaj (b. 1961) was born in the northern Moroccan city of Larache and works and lives in Morocco and England. Hajjaj’s numerous solo and group exhibitions include those at the Hayward Gallery, London, Maison Européenne de la Photographie, Paris, Somerset House, London, Los Angeles County Museum of Art (LACMA), the British Museum, London, the de Young Museum, San Francisco, Centre Pompidou, Paris, and National Museum of the 21st Century (MAXXI), Rome. His work has been collected by a number of leading institutions, including the Los Angeles County Museum of Art, Victoria and Albert Museum, Guggenheim Museum Abu Dhabi, Brooklyn Museum, and the British Museum.

Hassan Hajjaj, A Taste of Things to Come, Installation View