Over ten years ago I heard about a Blockbuster video store going out of business in Nashville. I bought all the videos in the store from them. I always loved the way VHS covers looked. I loved seeing them in long rows. I began to mark over the covers myself and distort the images. I liked the idea of changing the narratives. I liked the idea of turning them into paintings, or maybe they are sculptures now. My relationship with the individual films didn’t matter. I like that they can be touched and remade. These tapes contained stories. The stories are not just the films themselves. The stories are what’s inside the films, what’s hidden away behind the cover art and inside the box. I like being inside the box. All the hours of love and angst it took to create. All the lost names on all the credit lists. So many titles. They have been turned inside out. They have been remade. A million sequels. There is only one Blockbuster left in the world now. The VHS is nearly obsolete, lost in the fog of analog. We are heading into something new. Welcome to BLOCKBUSTER.
—Harmony Korine 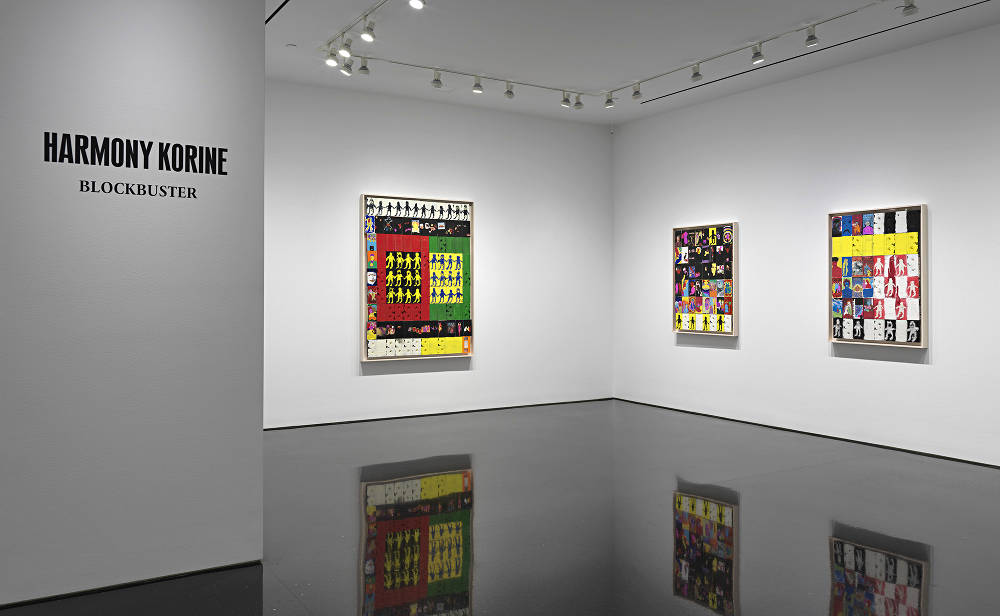 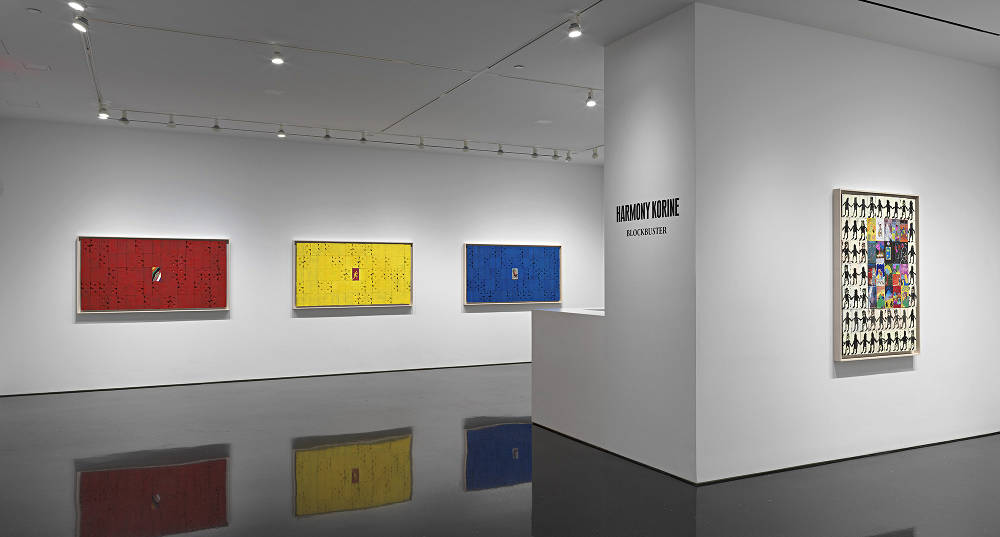 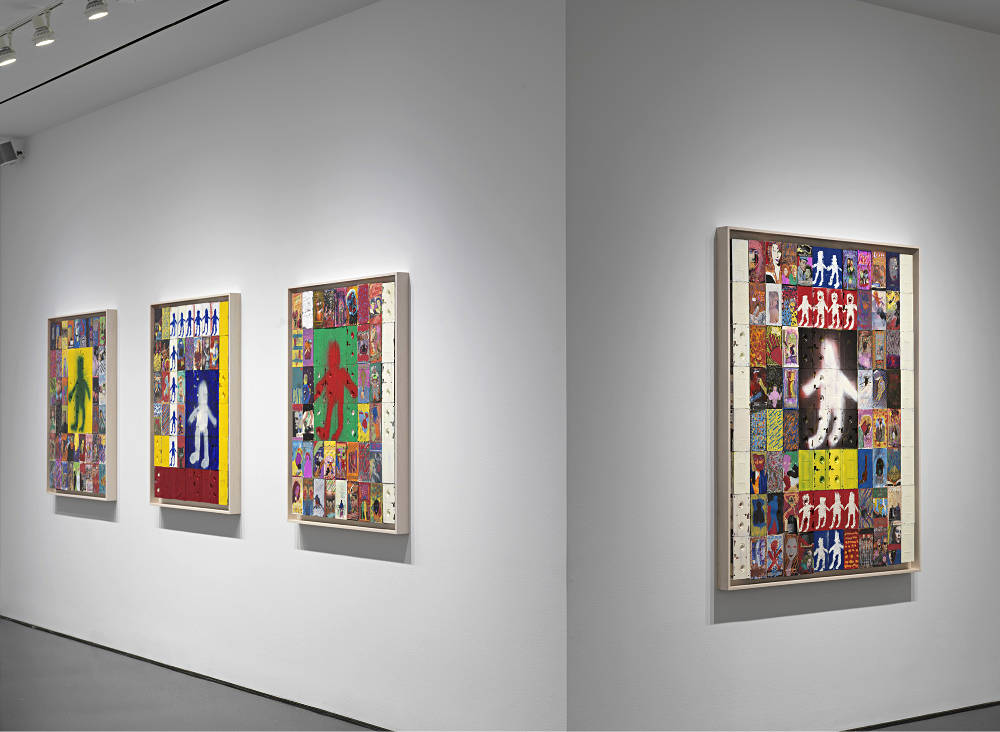 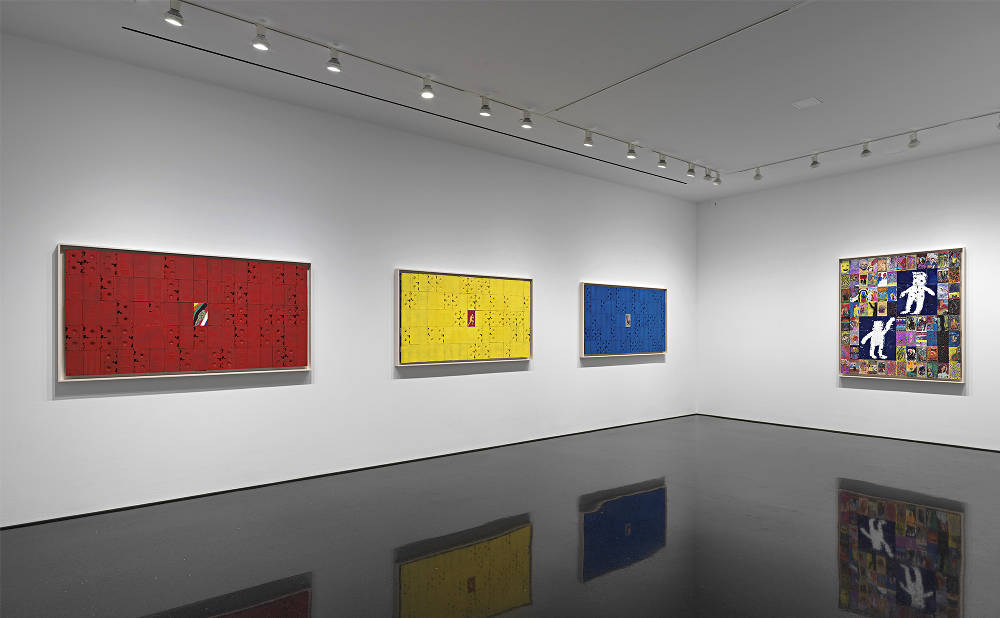 Korine’s paintings at once attract and confront viewers with their distinctive aesthetics of perversity, opposition, and grit. Often working with materials found at his local Salvation Army store in Nashville, Tennessee, Korine combines subconscious impulses with objects from everyday life, resulting in what he refers to as “mistakism.” An interest in hypnotic repetition led him to produce his Checking Madness series of warped checkerboard-pattern paintings, while the sequential images in film inspired his Loop Paintings of distorted photographs collaged on canvas, and, in 2016, the swirling “fazor” paintings.

BLOCKBUSTER includes a new series of works that use grids of VHS tapes and their boxes as surfaces for painting. These obsolete items, once the primary medium for distributing the moving image, are painted over with expressive gestures and figures from pop culture. Using squeegees, household paint, steak knives, and masking tape in place of traditional painting tools such as brushes and canvas, Korine creates loosely sequential images that echo the leitmotifs of his films. The geometric rows of painted images, recalling a patchwork quilt, yield variations that vacillate between considered and spontaneous mark making. Both deliberate and erratic, Korine’s paintings invite being studied in minute detail, while washing over the viewer not unlike sequences in a film.

Korine’s cult movies of the past twenty years—from the surreal Gummo (1997) to the noirish Spring Breakers (2012)—merge reality with fiction, handheld camerawork with precise montage. This same heady mix of the unplanned, the seductive, and the outlandish crystallizes in his highly tactile paintings.