In conjunction with Hanne Darboven Europa 97, also on view, on the third floor of the Upper East Side gallery, is an additional work by Darboven, titled Dostojewski, Monat Januar (1990), which chronicles the work of the Russian novelist Fyodor Dostoevsky. 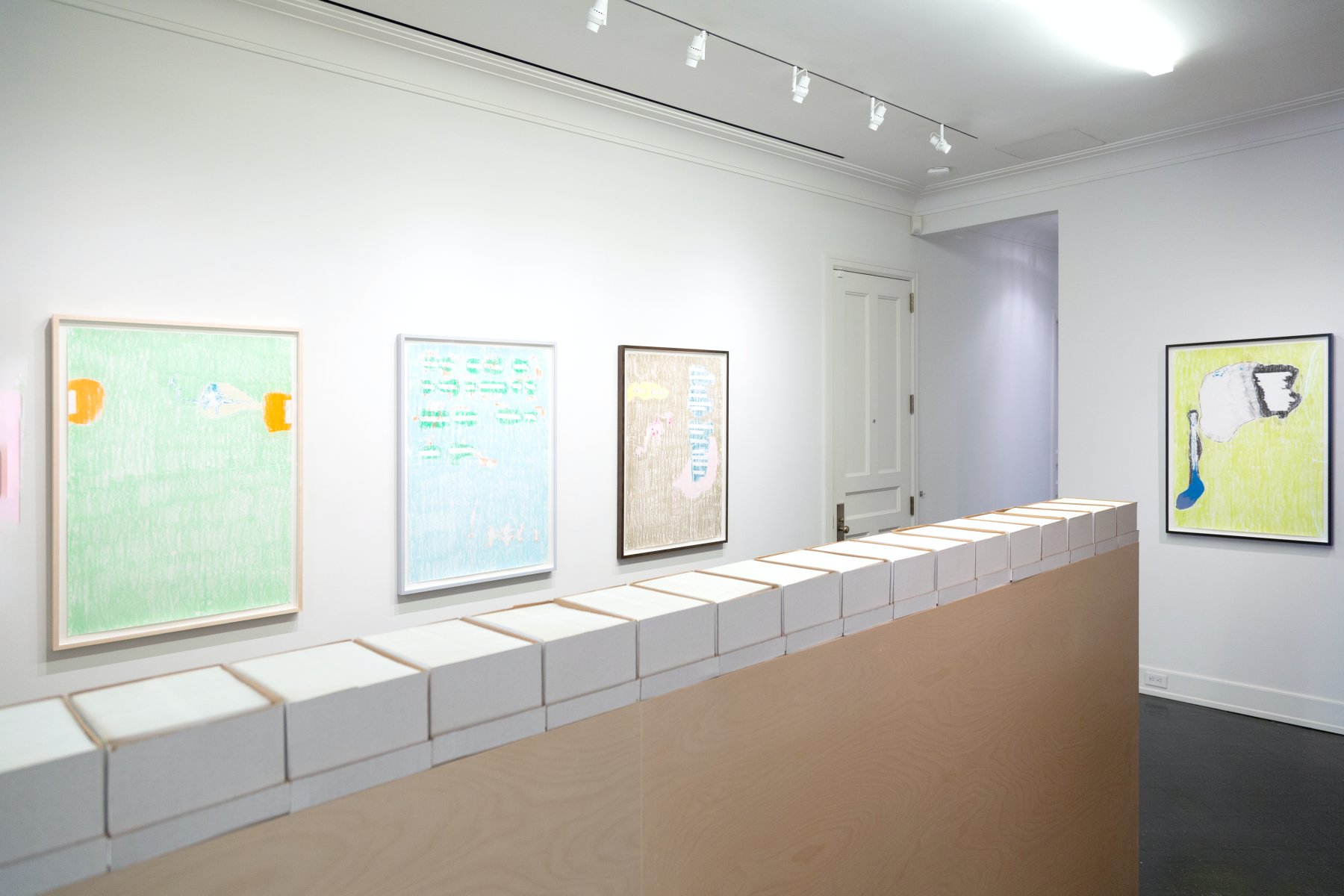 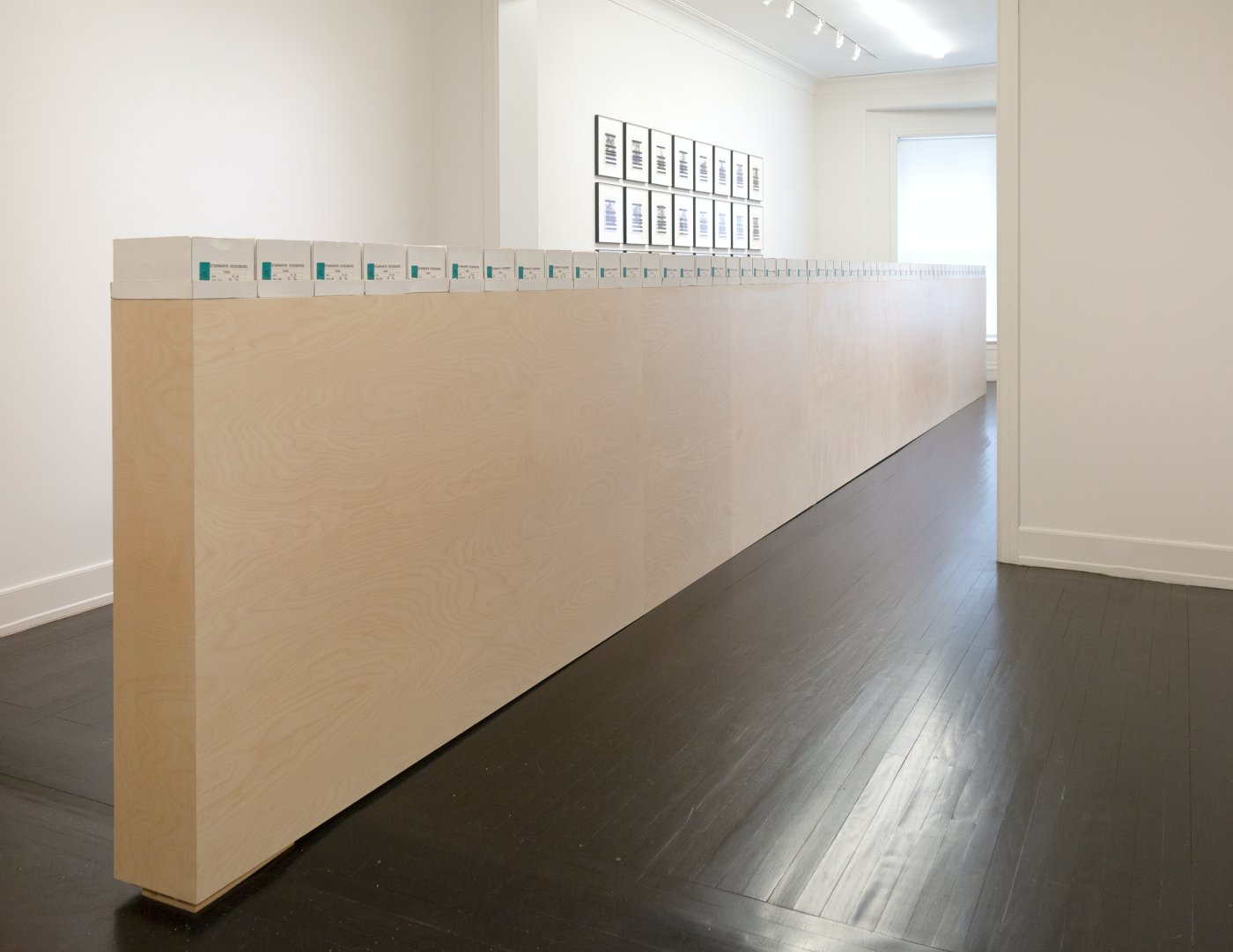 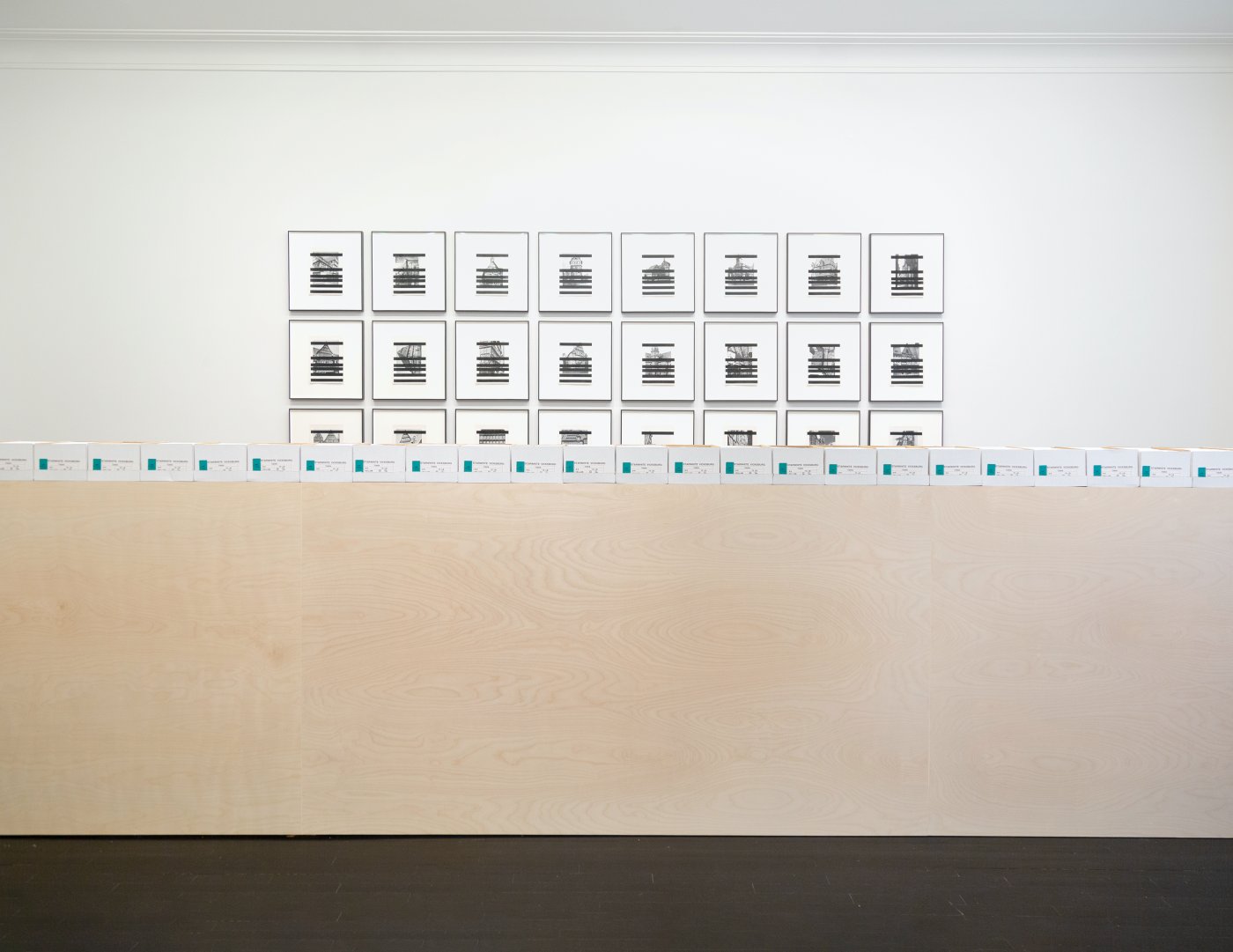 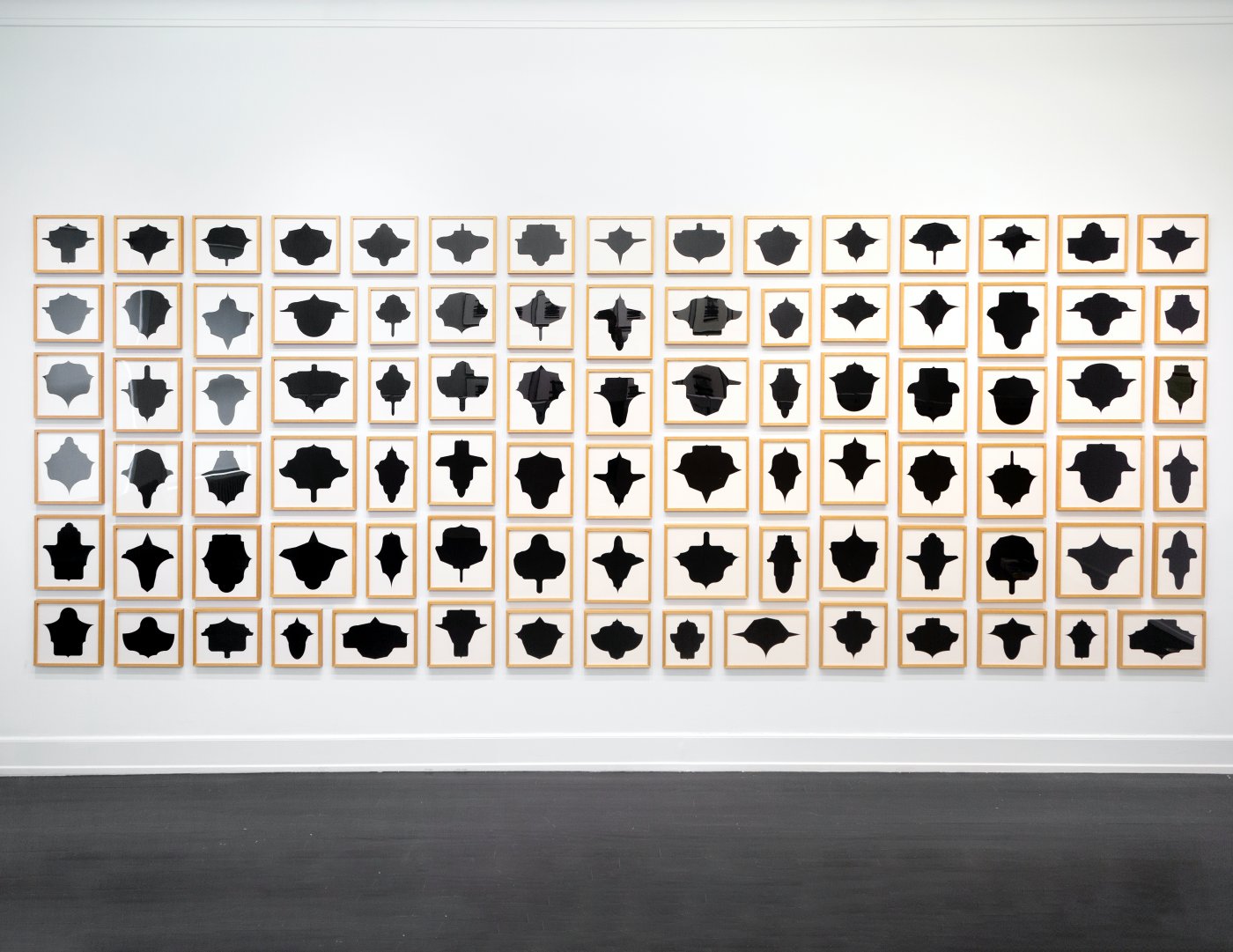 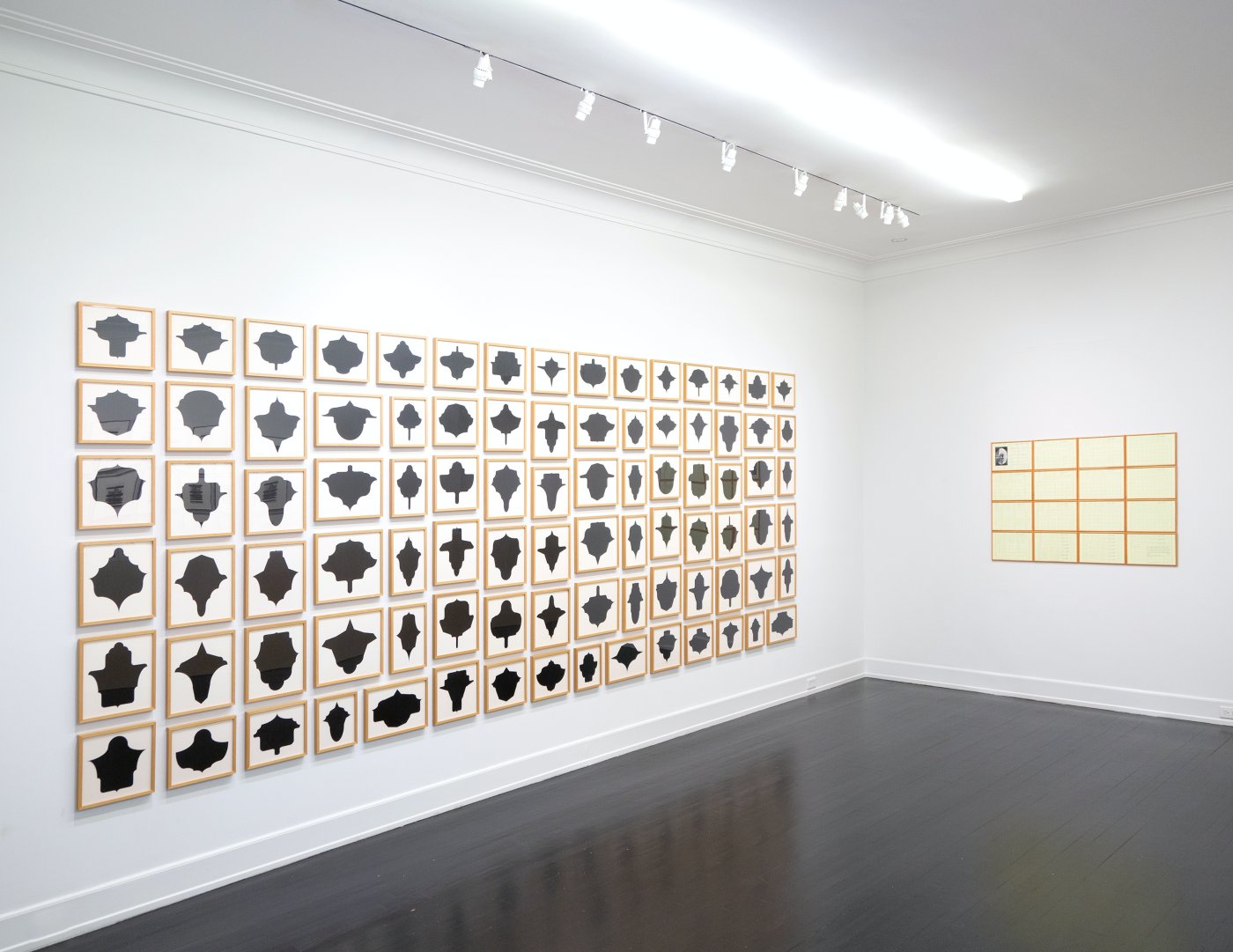 Alongside this work, is a unique grouping of artists in the Petzel program who have been influenced by Darboven’s career and impact. With contributions from Allan McCollum, Stephen Prina, Wade Guyton, and the first Petzel showing of work by Hong-Kong based multimedia artist Samson Young, these artists demonstrate, in their own ways, the incorporation of seriality, systems of notation, record-keeping, and appropriation in their work that is indebted to the pioneering efforts of Darboven.

Centered around Dostojewski, Monat Januar, one can see Darboven’s systematized visual language and ideas of chronicling reworked and expanded upon in the silhouettes of Allan McCollum, or the entire ArtPace, San Antonio, 2000 mailing list, printed and stamped by Stephen Prina. In a suite of twenty-seven drawings made from pages torn from the same book, Wade Guyton employs his signature method of printing a digital file over found imagery, the visual repetition of which belies the uniqueness of this machine-generated mark making. Samson Young has also relied on the creation of his own unique systems to develop various series in his work. Young’s compositions function like active-drones that use repetition to build and move textures, at times playing in unison, and arranged in a sequence of evolving configurations in others, these processes are intrinsically connected with the oeuvre of artists of Darboven’s era.

Much like how Darboven rejected the conventional concept of art, producing her works instead in the mode of writing and books, often constituting installations of hundreds of identically framed pages of diagrams, columns of numbers, and constructivist drawings—these artists too have undertaken the task of recording the passing of time, which is, one could say perhaps the single most universal human experience. Despite the inherent conceptual nature of Darboven’s work, these contemporary examples help to show just how much her ideas and ideals were deeply rooted in daily human life—bearing witness to this collective temporality in minute detail.

Petzel is especially delighted to present these works in tandem and tie Darboven’s legacy to artists working today. In these chronicles, lays a complicated web of feeling, memory, and diverse lived experience. In turn, Darboven and those who have followed in her footsteps, declare fiercely the importance of transparency, documentation, and reflection. Notions that in these current discorded times, are needed more than ever.