Some thirty years after the fall of the Berlin Wall this exhibition is the first to create a dialogue between Hanne Darboven and Ruth Wolf-Rehfeldt—and to trace parallels in the life and work of two artists facing very different realities on opposite sides of Post-war, divided Germany. 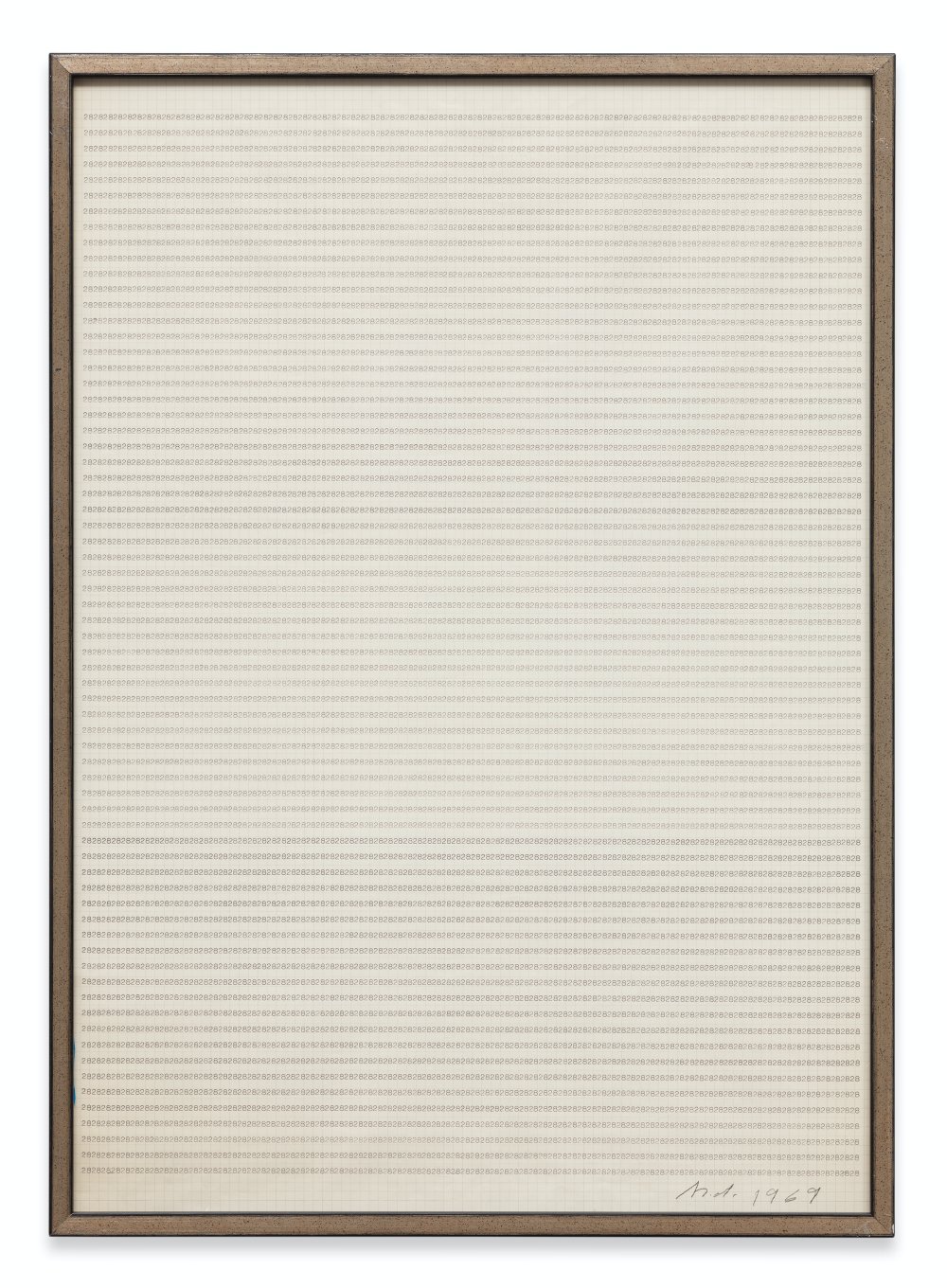 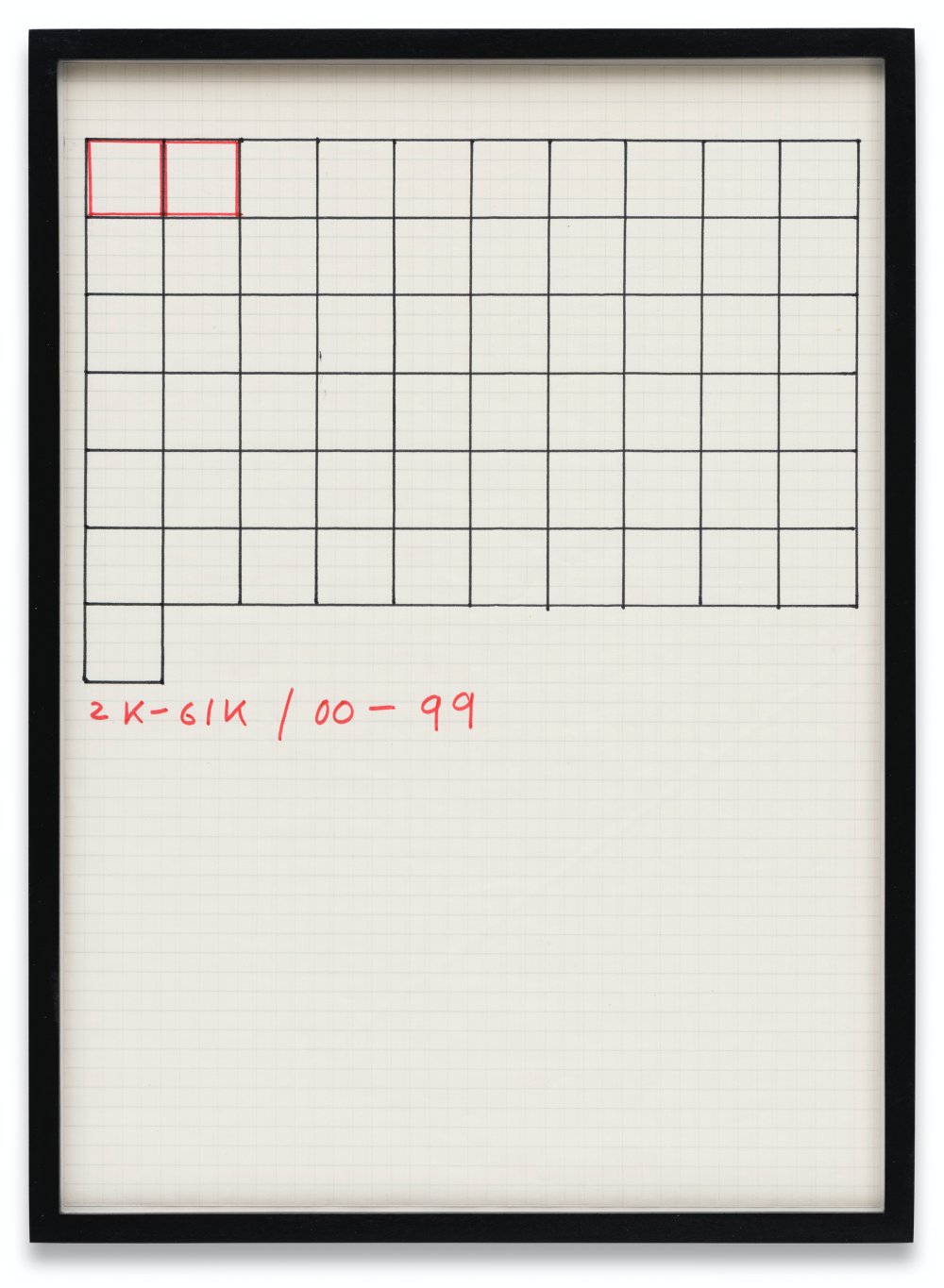 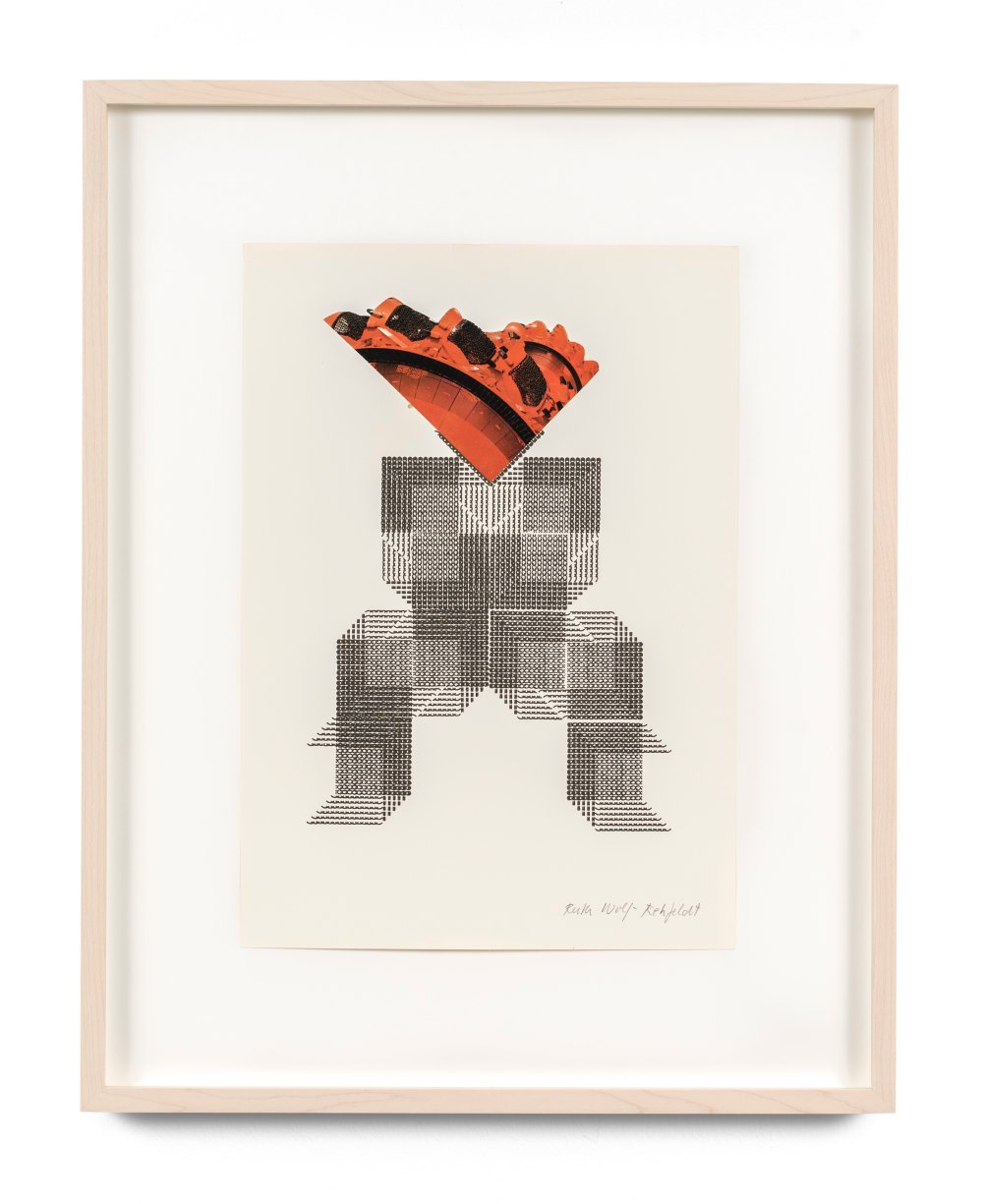 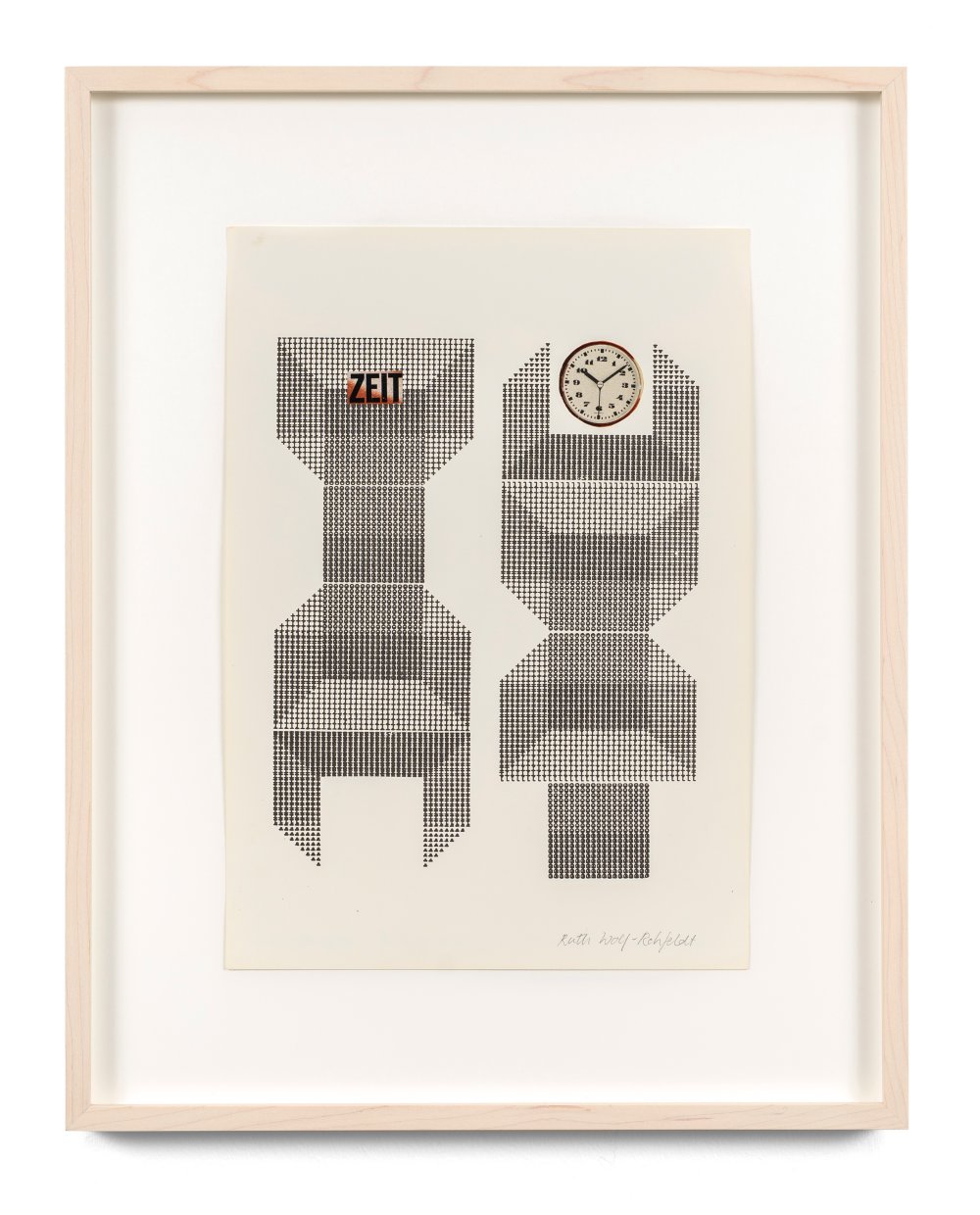 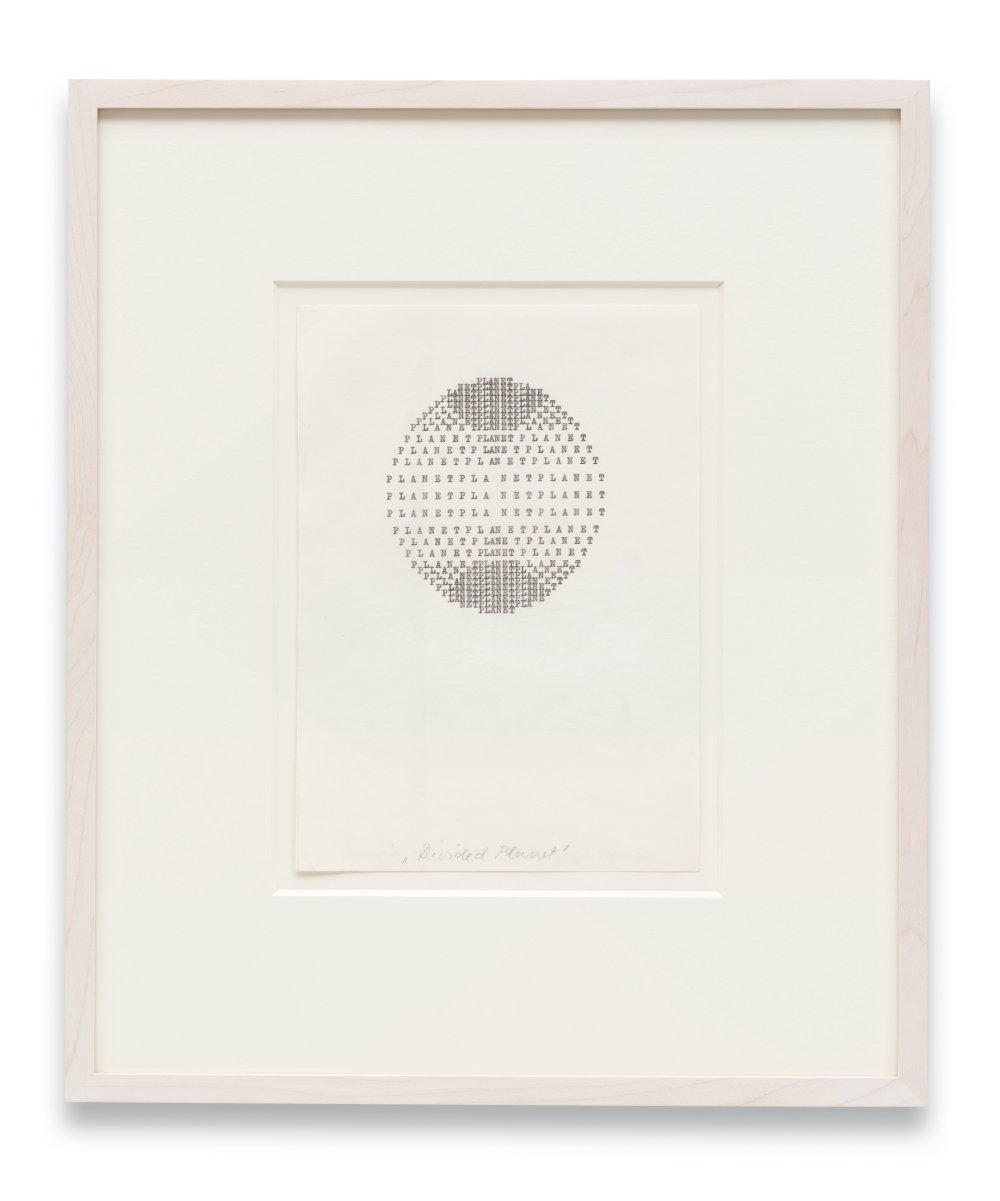 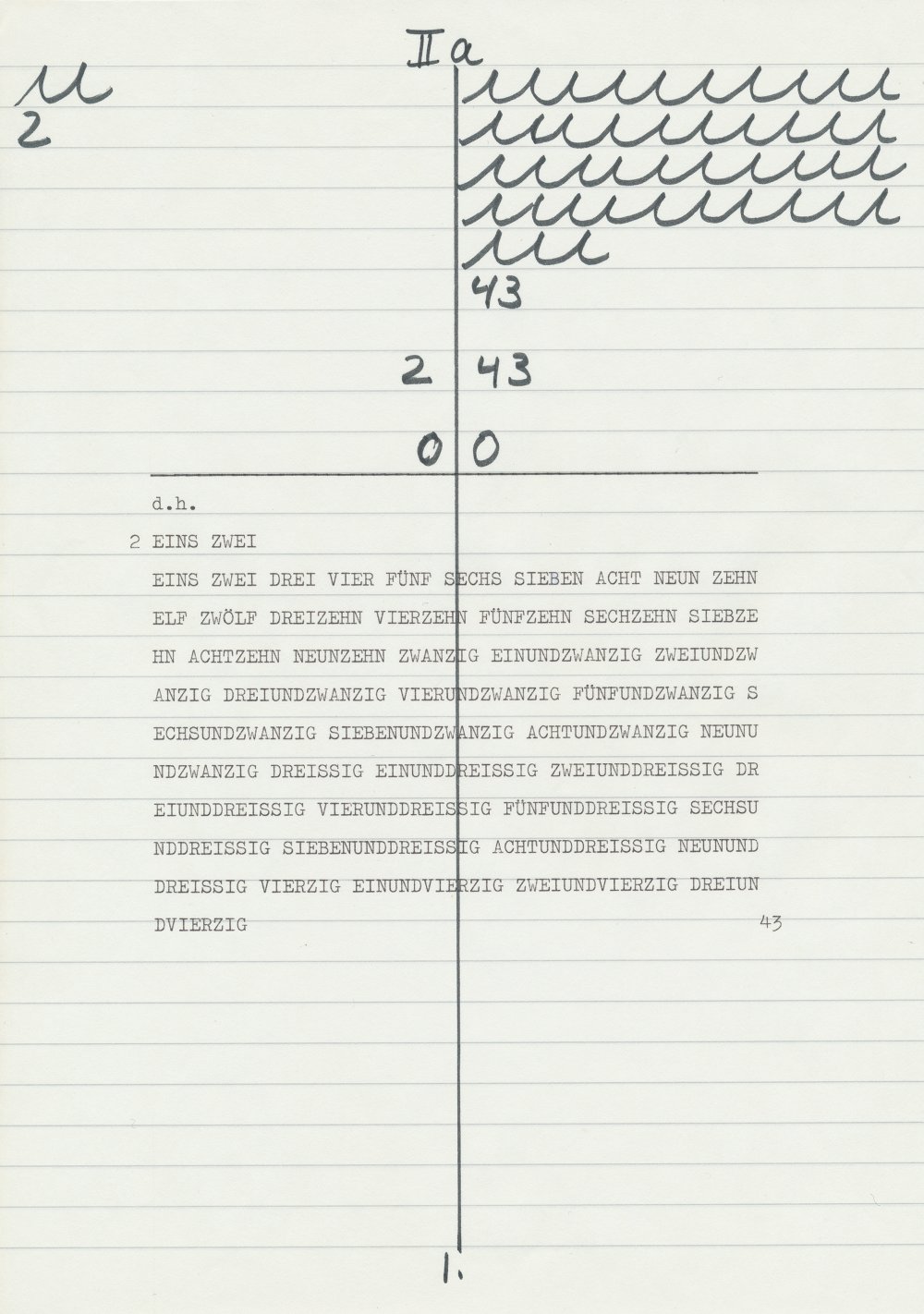 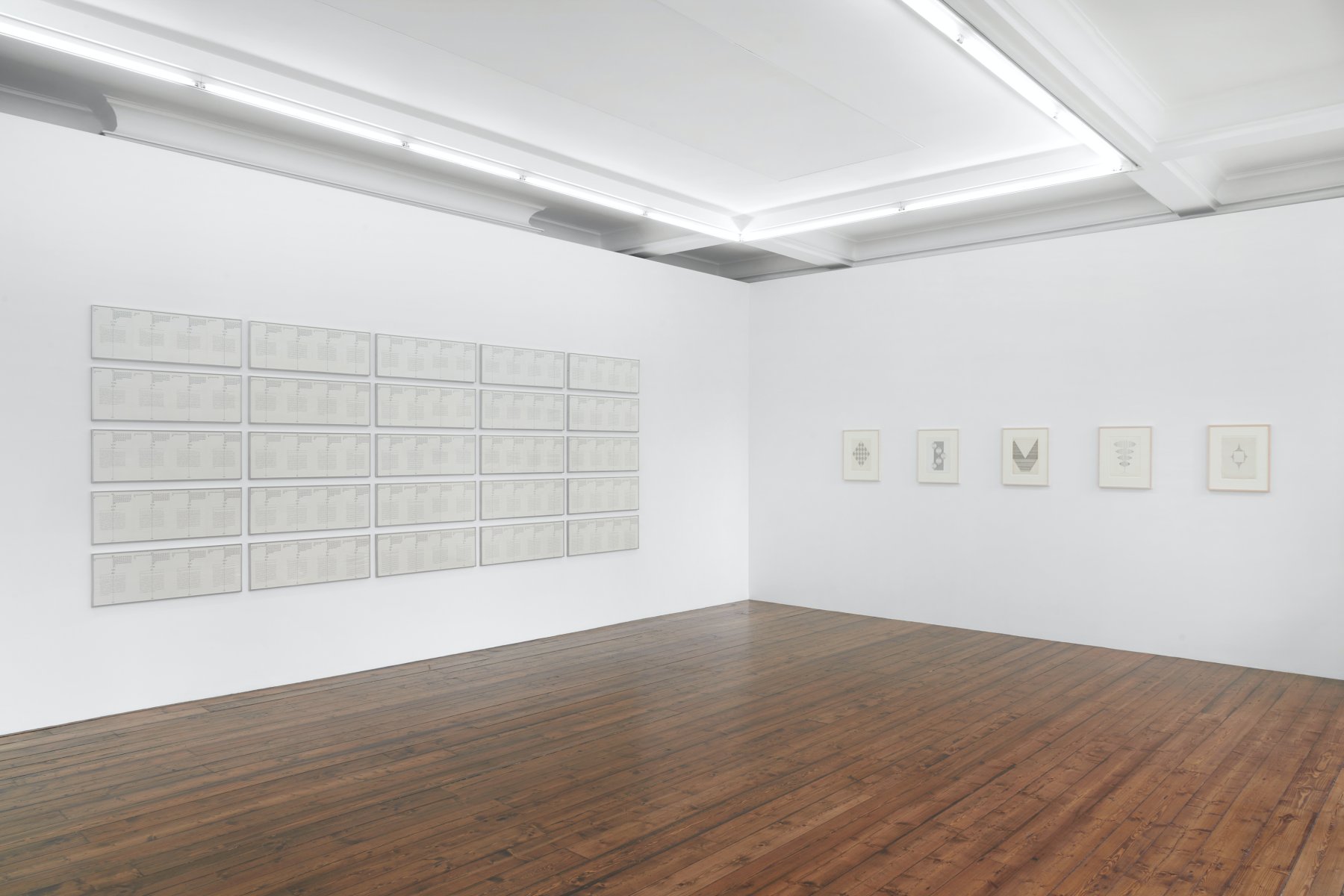 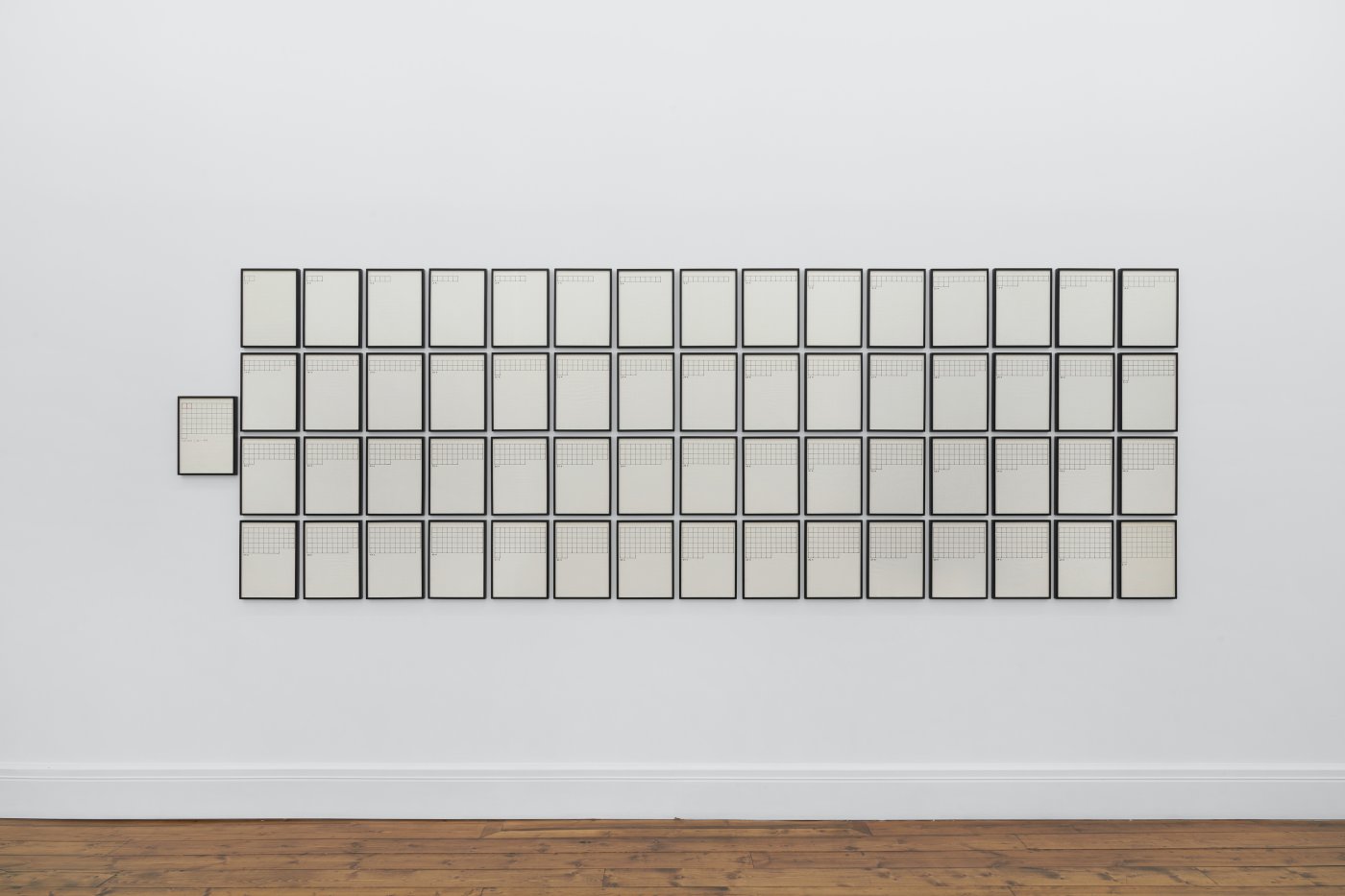 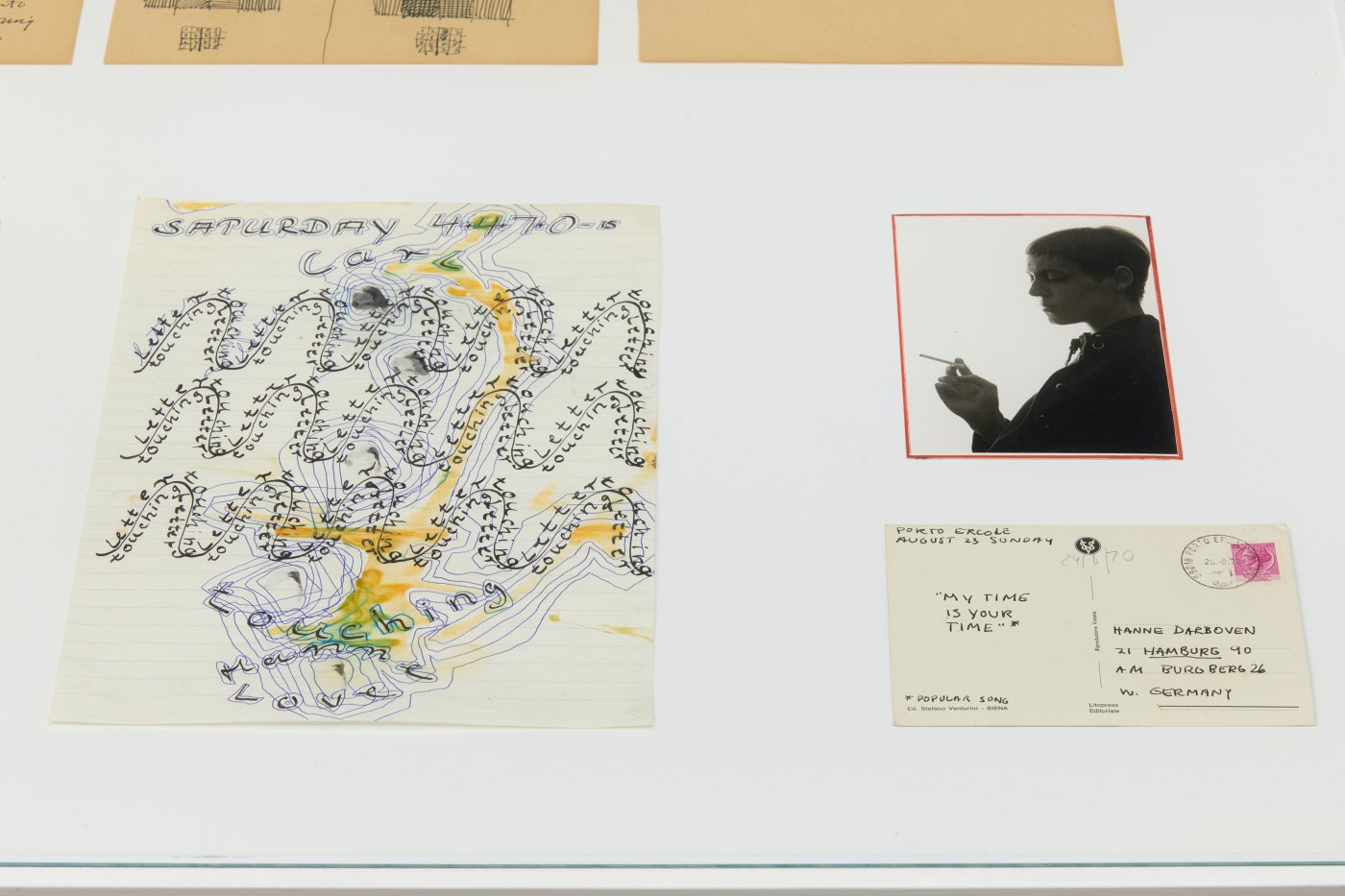 Although Darboven and Wolf-Rehfeldt were active at the same time, they never met and they were not familiar with each other’s work. Yet the repetition of forms, symbols and signs—often consisting of letters or numbers—is a recurring element in the work of both artists.

Darboven submitted her works to a clear, artist-defined structure that allowed her to generate a visual form for the contingencies and relationships that emerged from the numerical process. Darboven’s method strikes a contrast to Wolf-Rehfeldt, who composed her work using patterns and combinations of typewriter characters. Despite their differences, both artists shared an interest in the productive potential of external structures.

Unlike Wolf-Rehfeldt, for whom individual works on paper are usually self-contained pieces, Hanne Darboven began very early on to create multi-part installations that soon filled entire rooms. Her work Ein Jahrhundert. 1b / (One Century. 1b) (1971–74) consists of 100 A4 sheets of paper in 25 frames. Each sheet stands in chronologically ascending order for one year of a century, whereby the two numbers—presented here in an interplay of numerical words typed on a typewriter and U-arcs written in ink, which are a typical feature of her work—refer to cross-sum calculations of the first and last day of the year shown.

“I only use numbers because it is a way of writing without describing … It has nothing to do with mathematics. Nothing! I choose numbers because they are so constant, confined and artificial. Numbers are probably the only real discovery of mankind. A number of something (two chairs, or whatever) is something else. It is not a pure number and has other meanings.”
– Hanne Darboven

In contrast to Darboven’s formulae and attention to the abstract qualities of numbers, Wolf-Rehfeldt’s devised a more visual formula that was also a form of “writing without describing.” Her typewriter works on paper, which she refers to as “typewritings,” can be understood as a form of visual or concrete poetry. Wolf-Rehfeldt created innovative combinations of symbols and visual shapes that reference conceptual art, graphic design and architecture.

In 1966, after completing her studies, Darboven moved from her native Hamburg to New York, where she quickly joined the creative epicenter around Sol LeWitt, Carl Andre, Joseph Kosuth and other minimal and conceptual artists. Darboven returned to her parental home in 1969, where she would spend the rest of her life devoted to her work. Despite her self-chosen exile, the artist soon established herself as a very active part of the international art scene, thanks to numerous exhibitions in New York and elsewhere, and especially her frequent written correspondence with peers.

Living in East Berlin, Ruth Wolf-Rehfeldt was involuntarily cut off from the West and its art community. Despite political exile, she managed to find a way to keep in touch with fellow artists: In the 1970s, Wolf-Rehfeldt and her husband Robert Rehfeldt became East Germany’s most active initiators of the Mail Art movement. Letters and postcards became her sole channel for exchanging ideas with other artists around the world.

“Before the wall came down, I felt a great commitment towards time, with regard to East / West.”
– Hanne Darboven

Hanne Darboven (1941–2009) exhibited at a number of documentas (1972, 1977, 1982), and at documenta 11 (2002) Kontrabasssolo. Opus 45 (1998–2000) was shown on all three floors of the Fridericianum, Kassel. In 1982 she represented the Federal Republic of Germany at the Venice Biennale (along with with Gotthard Graubner and Wolfgang Laib). Selected solo exhibitions include Kunsthalle Bern (1969); Westfälischer Kunstverein, Münster (1971); Kunstmuseum Basel (1974); Deichtorhallen Hamburg (1991/92), Stedelijk Van Abbemuseum, Eindhoven and Musée d’Art Moderne de la Ville de Paris (both 1986); Dia Center for the Arts, New York (1996); Staatsgalerie Stuttgart (1997); Hamburger Kunsthalle (1999 and 2006); and Deutsche Guggenheim, Berlin (2006). Recent solo exhibitions include Museo Centro de Arte Reina Sofía in Madrid (2014); a double retrospective at the Bundeskunsthalle in Bonn and the Haus der Kunst in Munich (2015/2016); and presentations at the Falckenberg/Deichtorhallen Collection in Hamburg and Hamburger Bahnhof – Museum für Gegenwart Berlin (2017).

Ruth Wolf-Rehfeldt, (*1932 Wurzen, lives in Berlin), completely gave up her artistic practice after German reunification in the early 1990s. She still lives in her house in former East Berlin, which also served as her studio. Wolf-Rehfeldt worked steadily for three decades, far from any significant attention. There was little change to Wolf-Rehfeldt’s situation until 2012, when her work was rediscovered and made accessible to the public for the first time with the exhibition Ruth Wolf- Rehfeldt – Original Graphic Works 1972–1989 at Weserburg Study Centre / Museum of Modern Art Bremen on the occasion of her 80th birthday. Regular exhibitions were soon to follow; her work featured at Albertinum, Dresden (2018–2019); Malmö, Konsthall (2017­–2018); documenta 14, Kassel (2017); Museum für konkrete Kunst, Ingolstadt (2017); Kunstsaele Berlin (2016–2017); and Kunstnernes Hus, Oslo (2016–2017).