‘Gustav Metzger remains a moral compass, a constant reminder that integrity comes at a price, and that fighting for your convictions can indeed change the world. Metzger has done more than raise awareness. His art and philosophy are a stark testimony to the alternative world for which he strove.’ – Mathieu Copeland 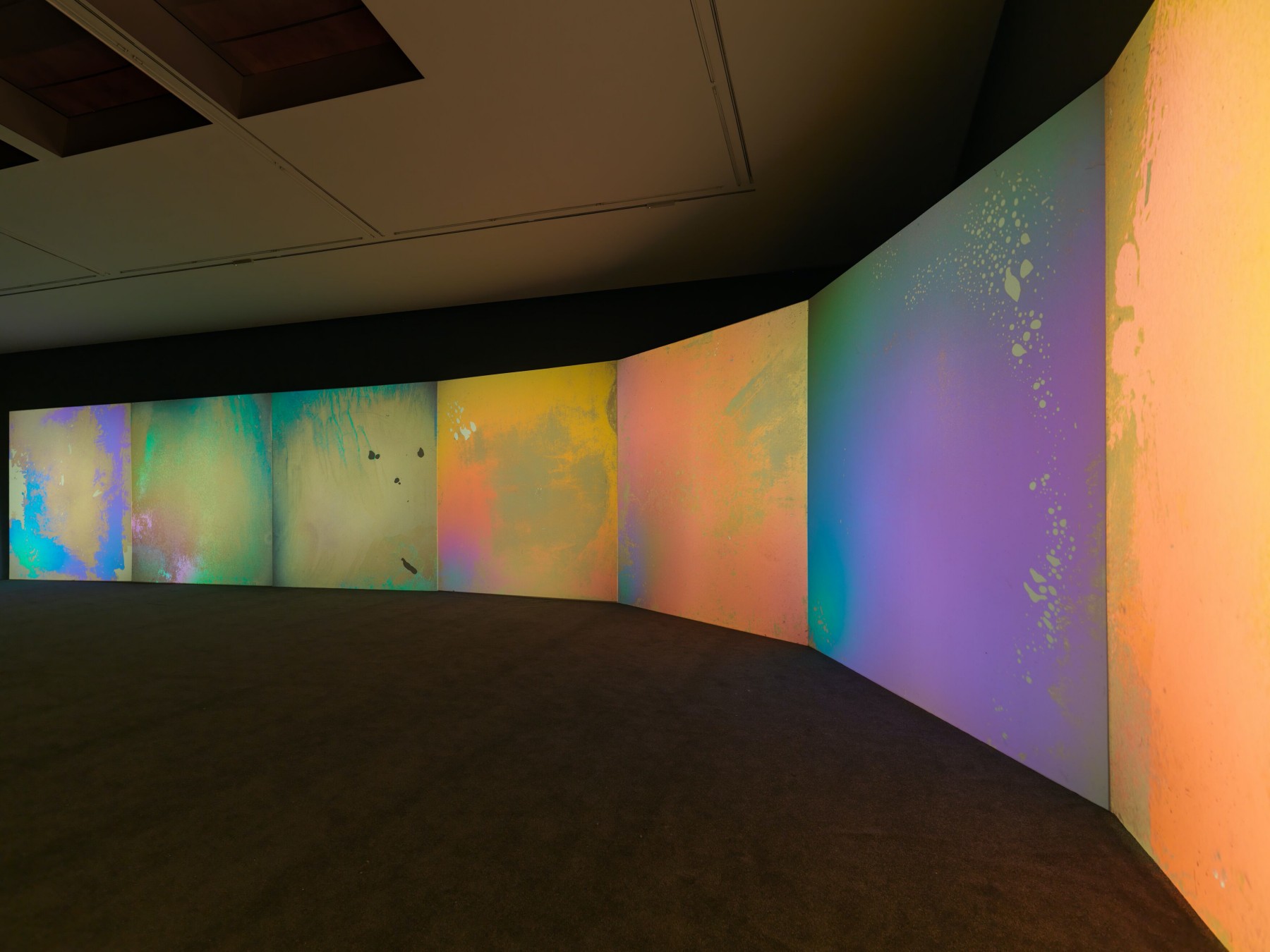 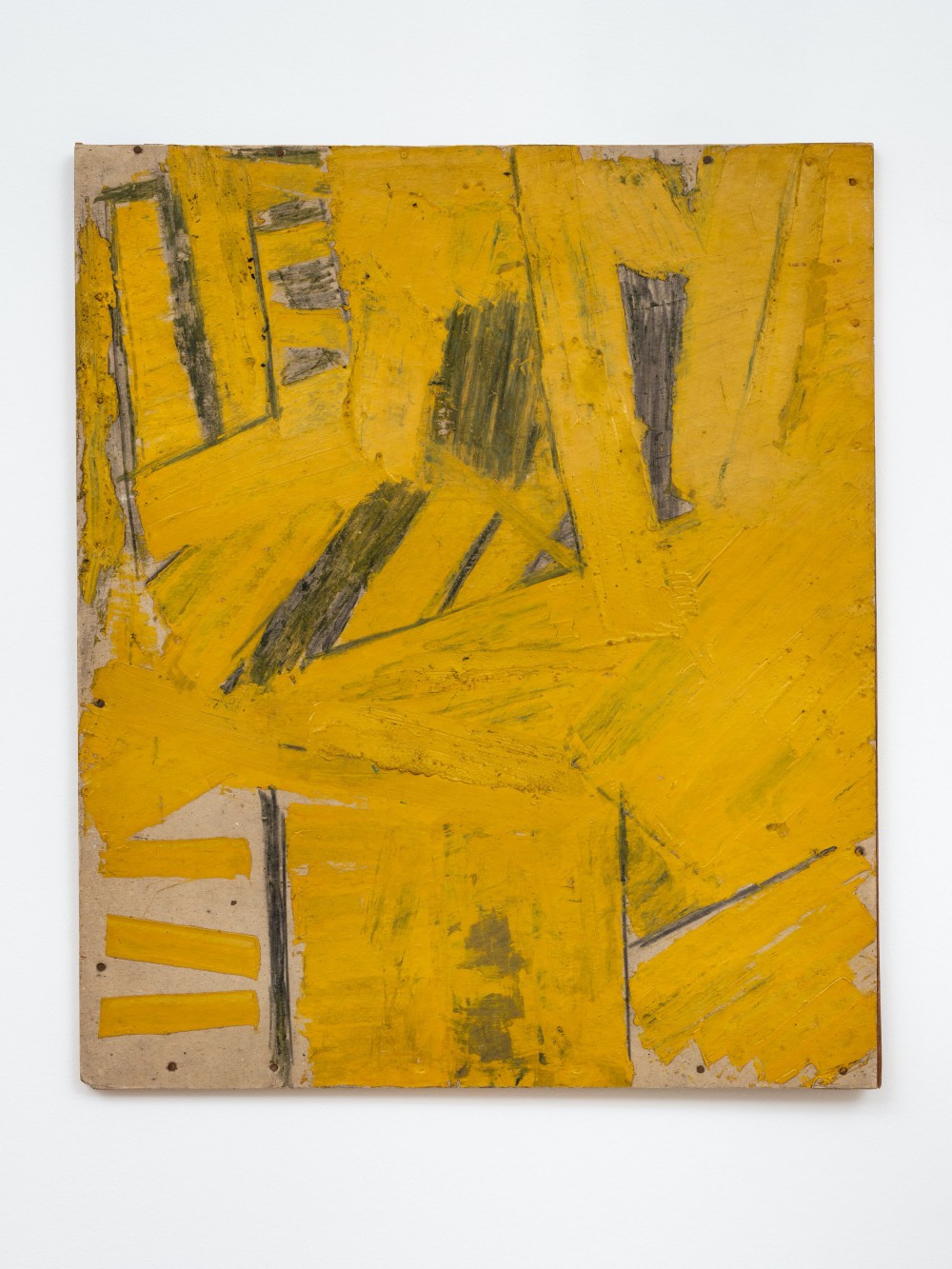 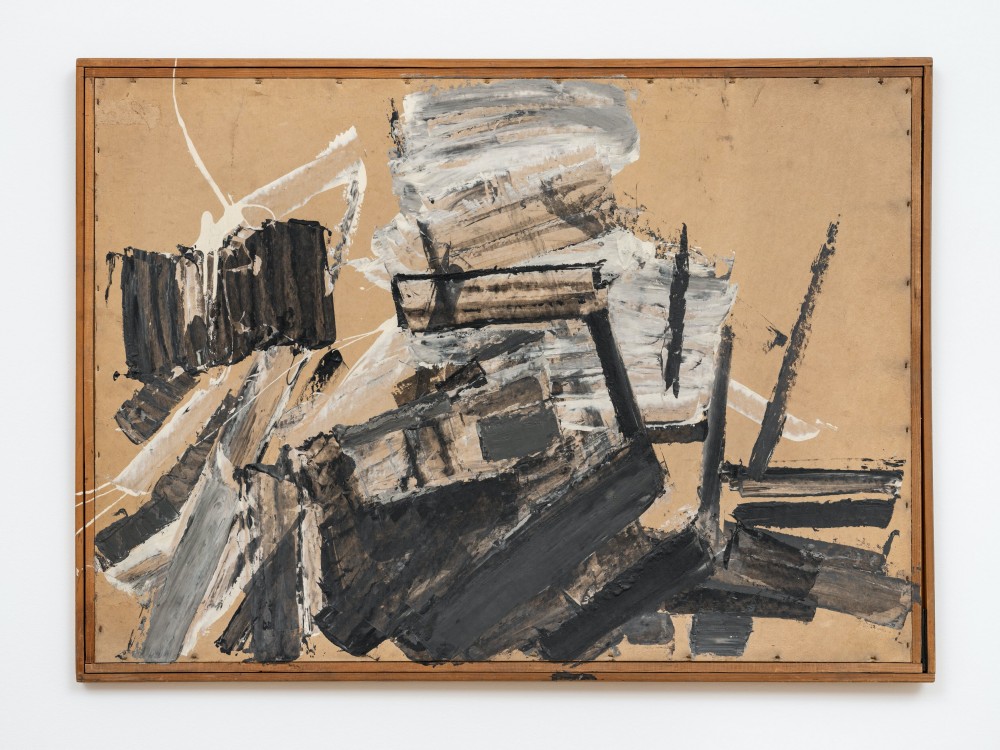 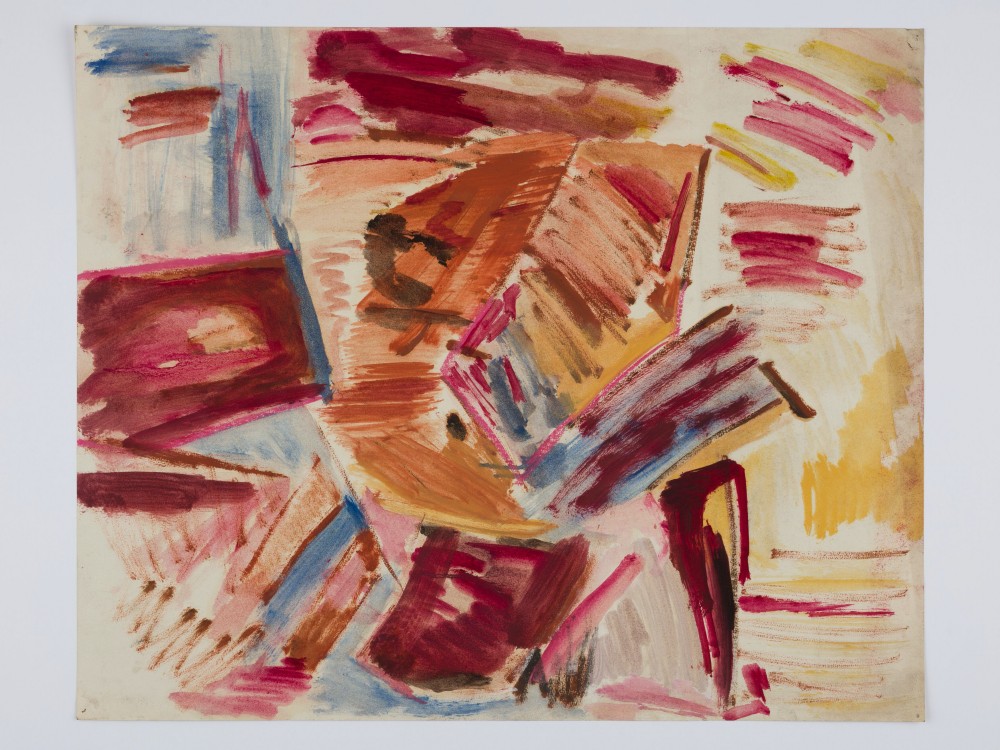 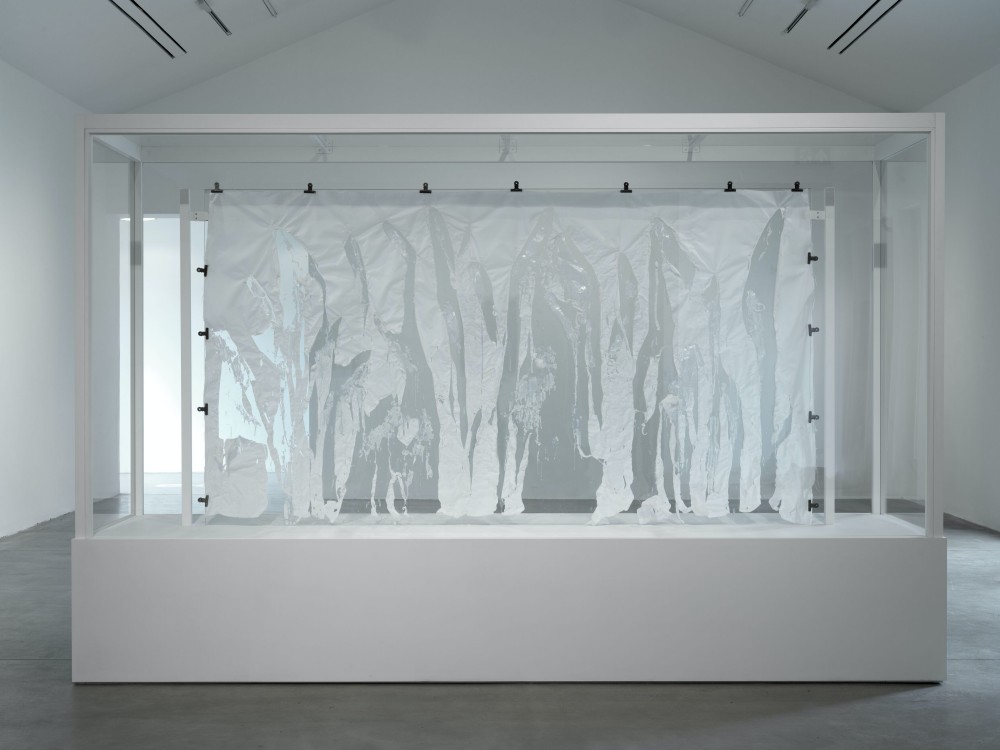 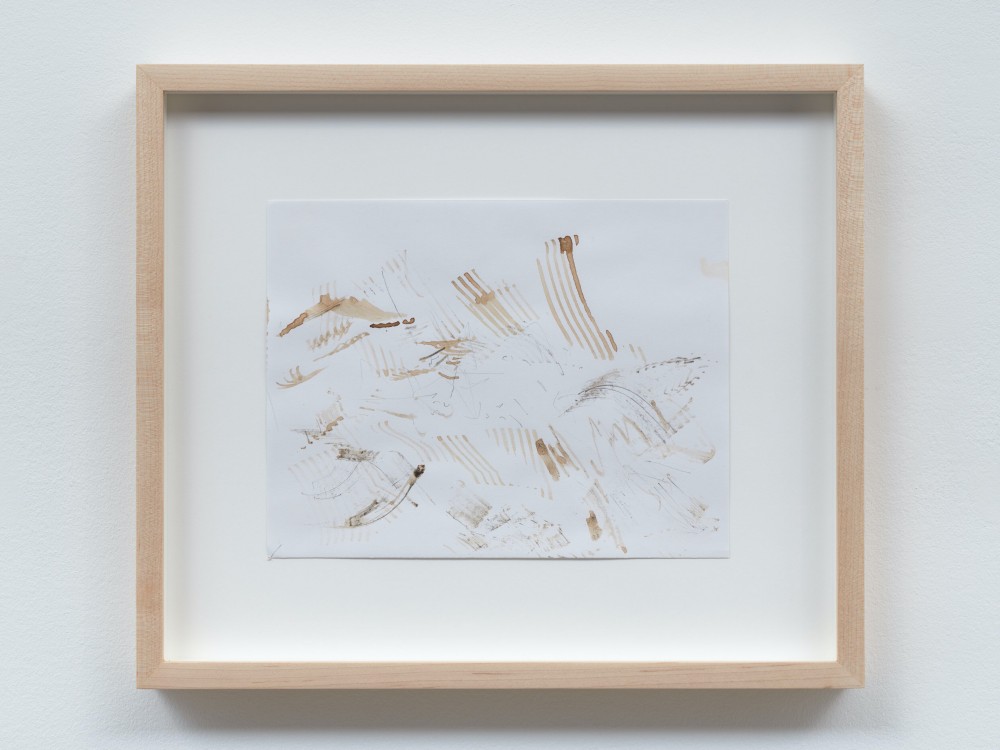 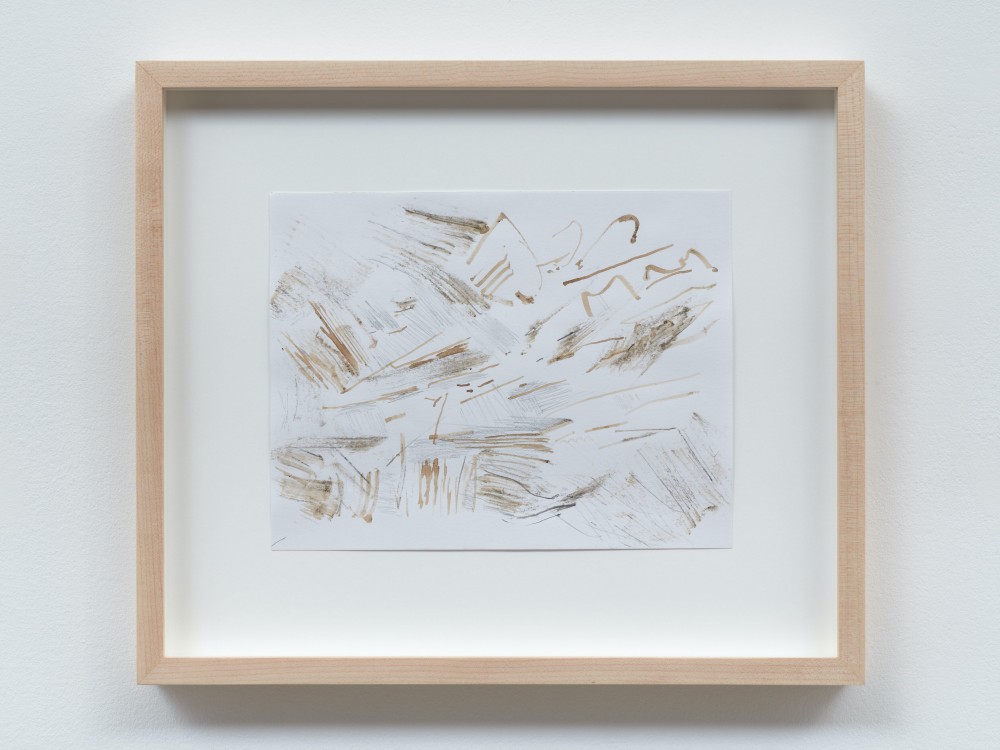 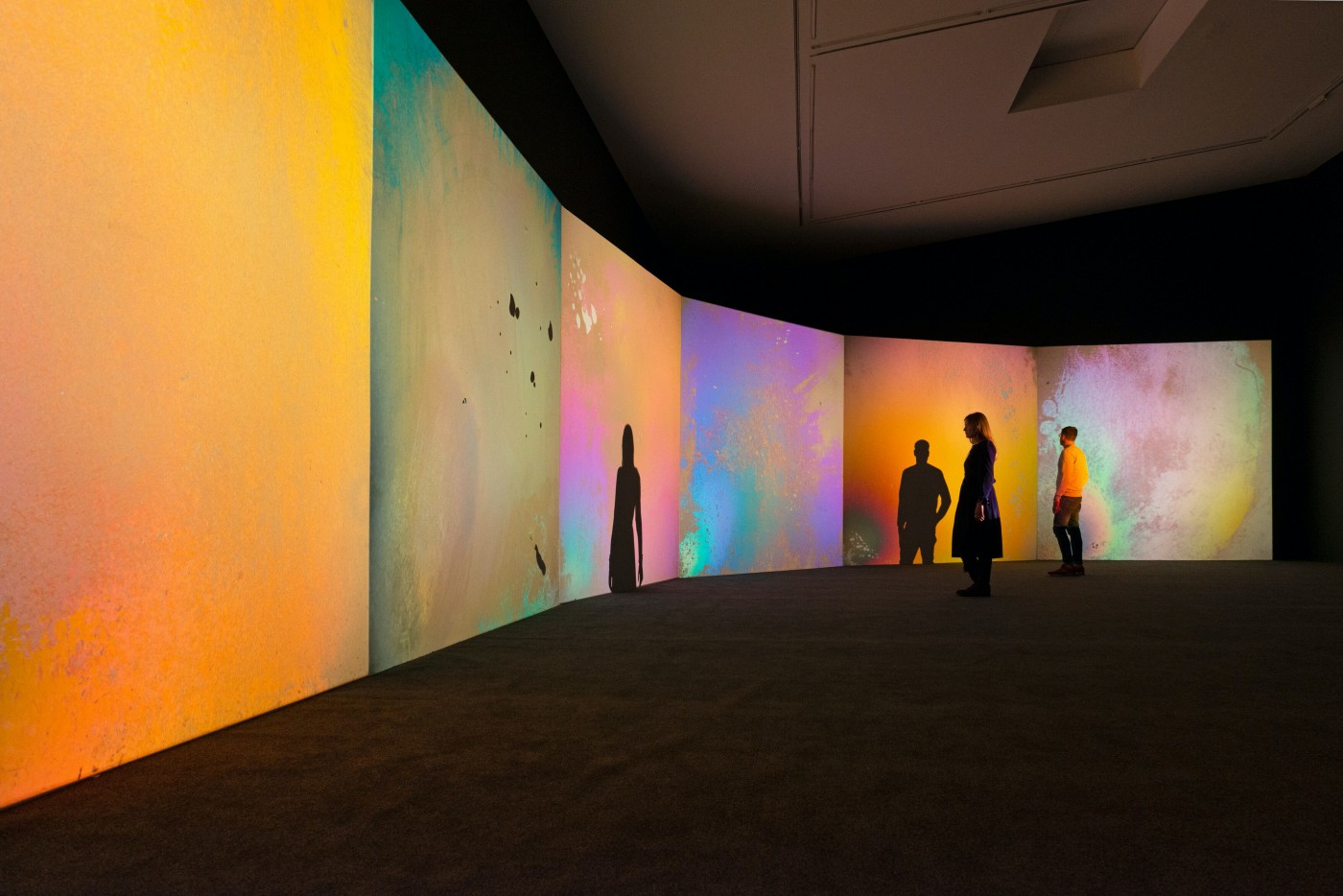 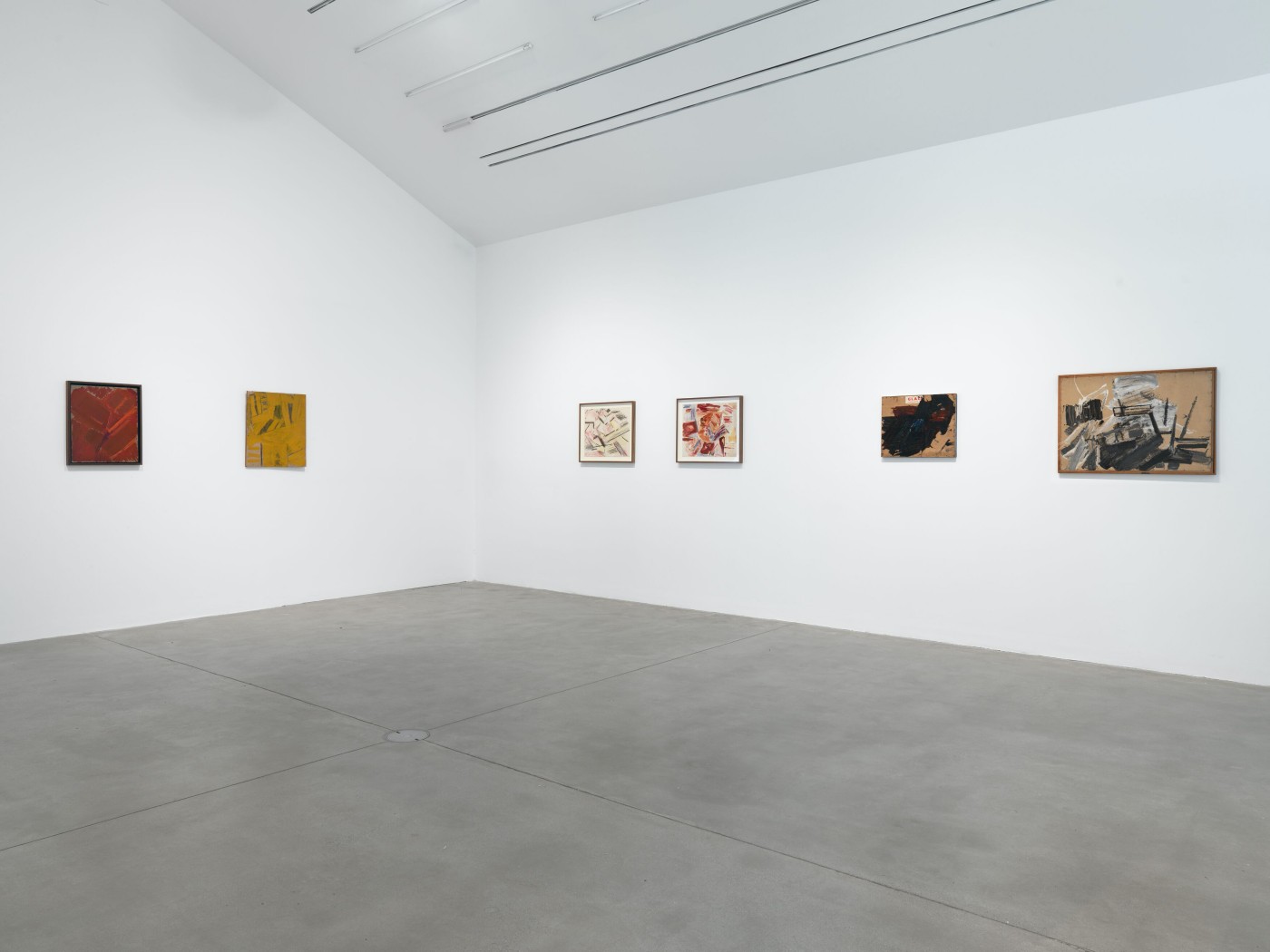 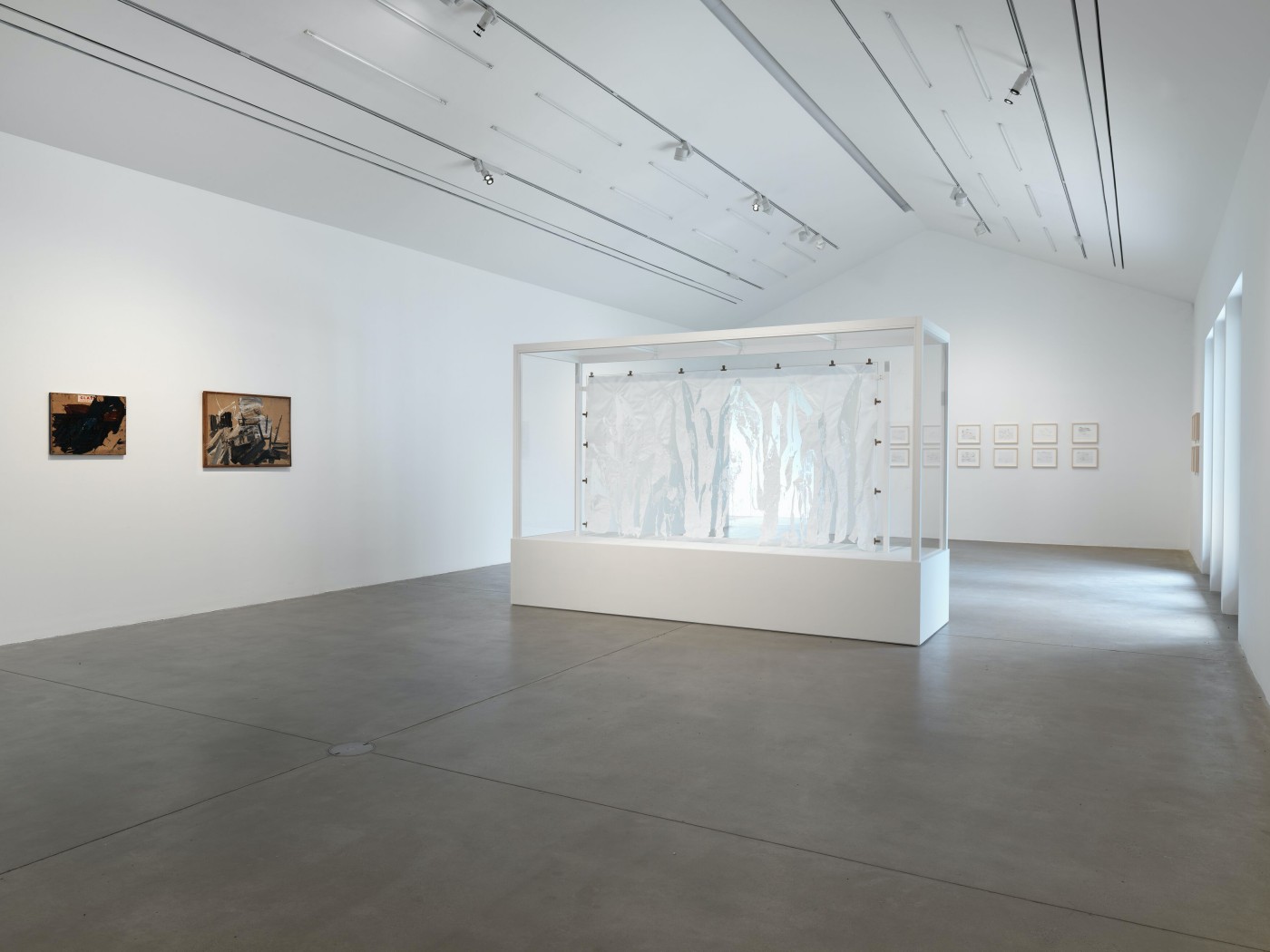 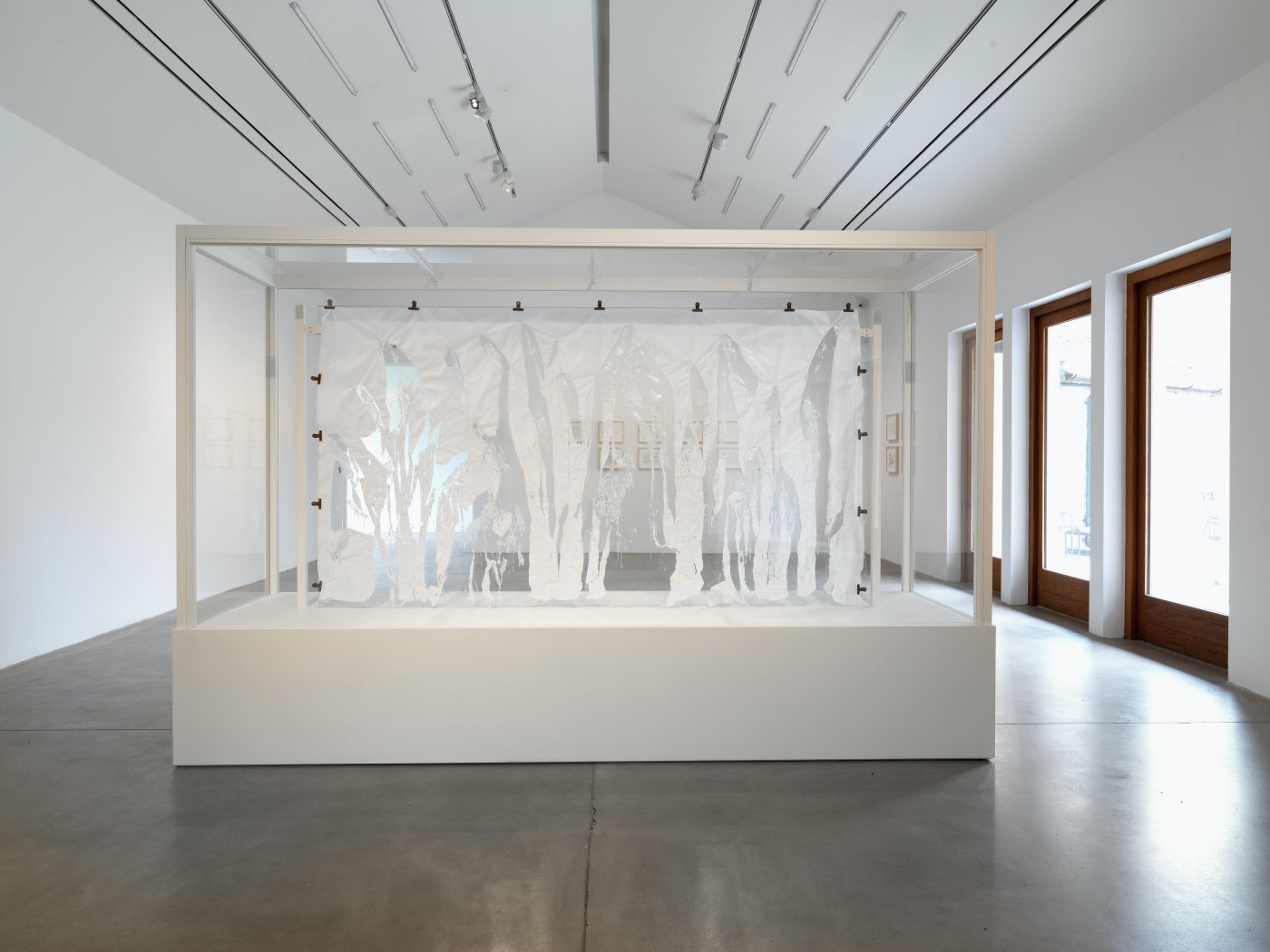 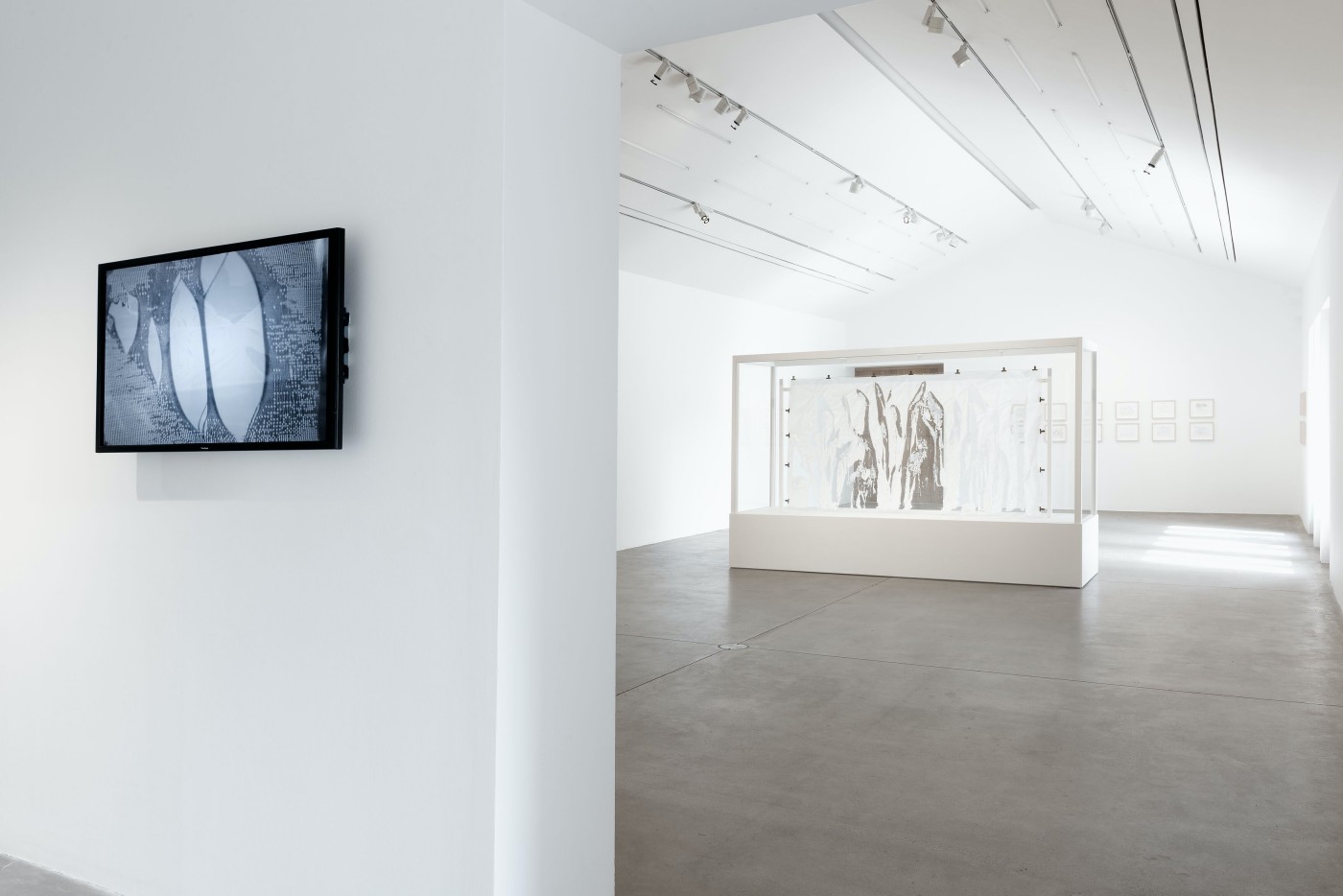 Gustav Metzger (1926-2017) radically challenged our understanding of art, its relation to reality and our existence within society. His uncompromising commitment to combat environmental destruction was fundamental to his questioning of the role of the artist and the act of artmaking as a vehicle for change. Hauser & Wirth’s inaugural exhibition of Metzger’s work in Somerset will provide a focused look at works that explore the intersection between human intervention, nature and man-made environments, ideas the artist continued to interrogate over a six decade career.

At the heart of Metzger’s practice was a passionate engagement with the notion of creation as a continual counterpoint to themes of destruction. A central feature of the exhibition in the Rhoades Gallery will be ‘Liquid Crystal Environment’ (1965/2021), one of the best-known examples of Metzger’s lean towards Auto-Creative Art from the 1960s onwards. The immersive environment utilises heat-sensitive liquid crystals between glass slides, creating colours and patterns that are projected into the space. The evolving artwork is in a state of constant flux, bringing together Metzger’s interest in both kinetic art and the relationship between science, art and nature.

‘Liquid Crystal Environment’ combines Metzger’s fascination with scientific discovery and the experience of pleasure and enriching stimulus through art. When discussing the work with Emma Ridgway of Modern Art Oxford in 2016, he commented: ‘We are desperately in need of warmth as a fundamental element in human interactions. With Liquid Crystal it is physically based on warmth, it is based on the transformation of one level of warmth to another. This dialectic is central to the experience.’ It was the idea of inner renewal and sensory phenomena that led to greater cultural fame in 1966, when the work was installed at the Roundhouse, London for performances by The Who, Cream and The Move.

The Bourgeois Gallery will span three important bodies of work from the 1950s until 2006, including: early paintings and drawings (circa 1950s), Acid Nylon painting (1960/2004) that is a key example of Metzger’s Auto-Destructive work, and later works on paper which he called ‘portraits of landscapes’, depicting the nature he saw around him (2003-2006). Each series of works are closely linked to the artist’s fast, gestural mark-making as a means to document his lifelong connection with nature and the environment, relentlessly tackling the reality and politics of his time.

Several of Metzger’s early paintings and drawings were made on found, readymade materials such as cardboard packaging, magazine and newspaper pages. The furious, jagged marks appear as if he was attacking the canvas with a physicality that reoccurs later in his acid paintings of the 1960s. Even with traditional painting materials, Metzger was exploring the act of destruction in art, reducing representational forms to a purely emotional response that is completely alive to the world. His tutor, David Bomberg proved to be a formative influence, not only in regard to artistic practice but also the ways in which he held art as an embodiment of social force. Following Metzger’s Auto-Destructive Art manifesto in 1959, he was able to realise his vision of transient art that leaves no material behind. By painting with acid on nylon he was able to embody the intensities of feeling and movement, violence and vulnerability in tune with his anti-capitalist position, distrust in political structures and increasing concern for natural ecosystems.

The exhibition is organised in partnership with the Gustav Metzger Foundation. During his lifetime, Metzger defined the organization’s mission by envisioning not only exhibitions of his work and furtherance of the political and philosophical ideas he espoused, but also through support for individuals working in the fields of the arts and environmental studies, and for initiatives ‘to combat the risk of global extinction arising from the activities of humans.’ The exhibition at Hauser & Wirth Somerset will be the first of the gallery’s global projects to implement a new carbon budget.

Gustav Metzger was a visionary artist and radical thinker, profoundly rooted in activism in both the political and artistic realms. He lived and worked in East London throughout most of his career, having travelled to the UK from Germany in 1939 with his younger brother as part of the Refugee Children’s Movement. Later, his grandparents, parents and older brother were killed in the Holocaust. By 1958, Metzger had become heavily involved in anti-capitalist, anti-consumerist movements and the Campaign for Nuclear Disarmament.

In 1960, he was a founder member of the Committee of 100 and this led to a short imprisonment in 1961 with Bertrand Russell and other members of the Committee for encouraging mass non-violent civil disobedience. His auto-destructive art, meant as a public art form that would instigate social change, sought to provide a mirror of a social and political system that he felt was indifferently progressing towards total obliteration.

In 2009 the Serpentine Galleries, London, staged the most extensive exhibition of Gustav Metzger’s work in the UK, ‘Decades 1959 – 2009’. The same year Metzger installed ‘Flailing Trees’ (2009) at the Manchester International Festival (now in the collection of the Whitworth Art Gallery, Manchester) a group of willow trees upended in concrete with their branches cut down and their dead roots exposed to the air. In 2015 he led the large-scale project ‘Remember Nature’, in which he urged arts professionals and students to participate in a Day of Action to highlight the topic of extinction, climate change and environmental pollution.