Galerie Max Hetzler presents EXPOSITION COLLECTIVE 1974 – 2007, a solo exhibition by Günther Förg spanning three decades of his career. This is the artist’s twenty-second solo exhibition at the gallery. 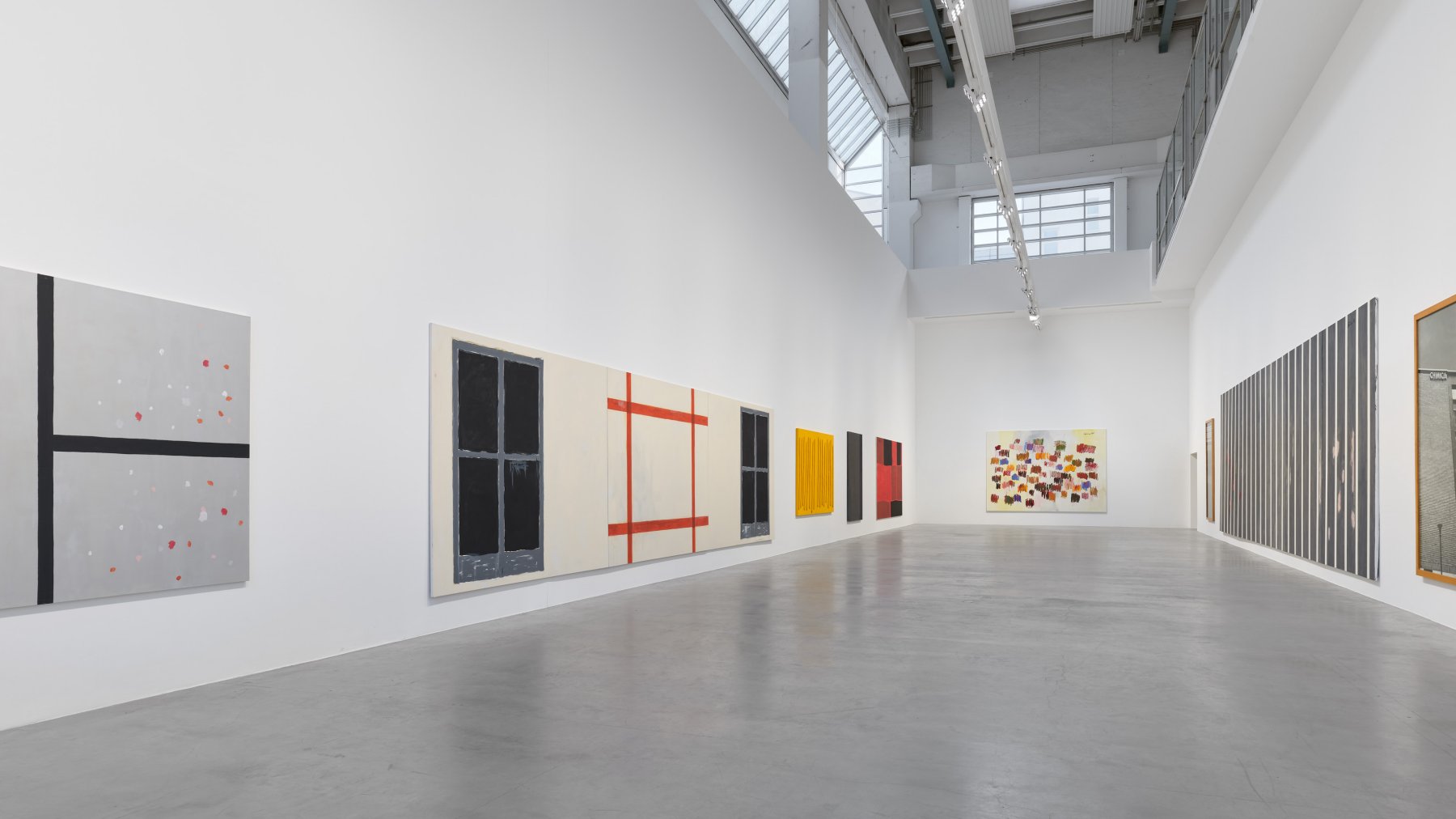 Günther Förg’s work was characterised by his multidisciplinary approach, the diversity of thematic references and motifs, and his preoccupation with modernist art and architecture. Since the early 1970s, Förg thus created an œuvre that includes paintings and drawings as well as sculptures, photographs and wall paintings. The mostly abstract and monochrome paintings of the early years are a significant departure from the figurative painting that dominated Germany at the time.

Examples of Förg’s work, including paintings and photographs (as well as three sketches for Förg exhibitions at Galerie Max Hetzler Cologne from 1983) can be found in the large ground floor exhibition space on Potsdamer Strasse. Förg’s approach to abstract art from a purely formal point of view, albeit with references to modernist art and to the vernacular of art history, allows the viewer to experience a pictorial expression which focuses exclusively on the fundamentals of painting. Looking at the sometimes monumental works, such as a 350 x 1300 cm painting from 2003 or another three-part work from 1998 measuring 260 x 1020 cm, we can see Förg’s interest in an expansive approach to painting which combines individual picture panels with the dimensions and effect of a room. We can see a development in the painting from the monochrome pictures of the 1970s to increasingly structured “window paintings” and, from the early 1990s, to the flickering grids of the paintings known as “grid paintings”. Förg drew new impulses for the continuation of panel painting from the experience he had gained with wall painting. “In the paintings from 1990 onwards, there are sometimes themes and subjects such as window paintings, late paintings by Munch or Bonnard as a starting point, as well as grid paintings or grey paintings that refer to the works of the seventies”.1

The many journeys on which, from the 1980s onwards, Förg took photographs, were equally important. He preferred the large format for his architectural photographs. In particular, he devoted himself to buildings of Italian rationalism and iconic 20th century modernist architecture. The photographs are presented with heavy frames, the reflective glass simultaneously reflecting and absorbing space and the viewer. The first house Förg photographed and to which he returned again and again was the Villa Malaparte, which he knew from the Jean-Luc Godard film, “Contempt”, and which the Italian poet Curzio Malaparte had built on Capri in the late 1930s.

A series of bronze reliefs is shown on the outside wall in the exhibition space on the upper floor. Similar to the fleeting application of paint on the heavy supports of the paintings on lead, the bronze reliefs and the sculptures also play with the tension between lightness and weight. The production of the plaster models requires a fast working method, whose expressive handwriting is then effectively frozen in bronze. In the interior of the gallery, a wall painting from 1986 which Förg originally created for the rotunda of the Schirn in Frankfurt can be seen. The wall paintings represent a central aspect of his artistic work. They opened up new presentation possibilities for him, could be combined with photographic as well as painterly works, and were always intended to clarify the space and provide rhythm for its structure. Two torsos standing in the room serve as examples of the sculpture which Günther Förg has added to his oeuvre since the 1980s. The stone casts, one light and the other dark in colour, take up classical forms, but their jagged shape demonstrates his delight in playing with surfaces. In contrast to the smooth wall painting, which is free of any trace of his hand, the expressive gesture is an important feature here. On the end walls of the room, two photographs from the Villa Malaparte replace the windows missing from the gallery’s “white cube”, a device often used by Förg.

Additionally to the exhibition at Potsdamer Straße, the Window Gallery at Goethestraße 2/3 will display Förg’s work Untitled, from 1991 (acrylic on canson).

Günther Förg (1952–2013) was born in Füssen and died in Freiburg, having lived and worked in Areuse, Switzerland. The artist was a professor at the University of Arts and Design, Karlsruhe, and later at the Academy of Fine Arts, Munich. His work has been presented in numerous solo exhibitions at international institutions, including the Palazzo Contarini Polignac, Venice (2019); Stedelijk Museum, Amsterdam, and Dallas Museum of Art (both 2018); MEWO Kunsthalle Memmingen (2016); Deichtorhallen, Hamburg (2015); Fundación Luis Seoane, A Coruña (2014); Museum Brandhorst, Munich (2014); Museo Carlo Bilotti, Rome (2013); Essl Museum, Klosterneuburg (2008); Tokyo Museum of Contemporary Art (1991); Musée d’Art Moderne de la Ville de Paris (1991); and Secession, Vienna (1990)

Many thanks to the Estate Günther Förg and Michael Neff for their generous support.