Walter Storms Galerie opens a new exhibition space at Amalienstrasse 22 in Munich, thus maintaining three locations in the Bavarian capital in the future. The permanent exhibition in the new gallery is dedicated to the print work of Günter Fruhtrunk (1923- 1982), one of the most important representatives of German constructivist-concrete post-war art. Walter Storms Galerie has owned Fruhtrunk’s estate since 2014 and in the same year founded the Günter Fruhtrunk Gesellschaft together with collectors and friends of the artist with the aim of preserving, promoting and protecting the artist’s legacy. 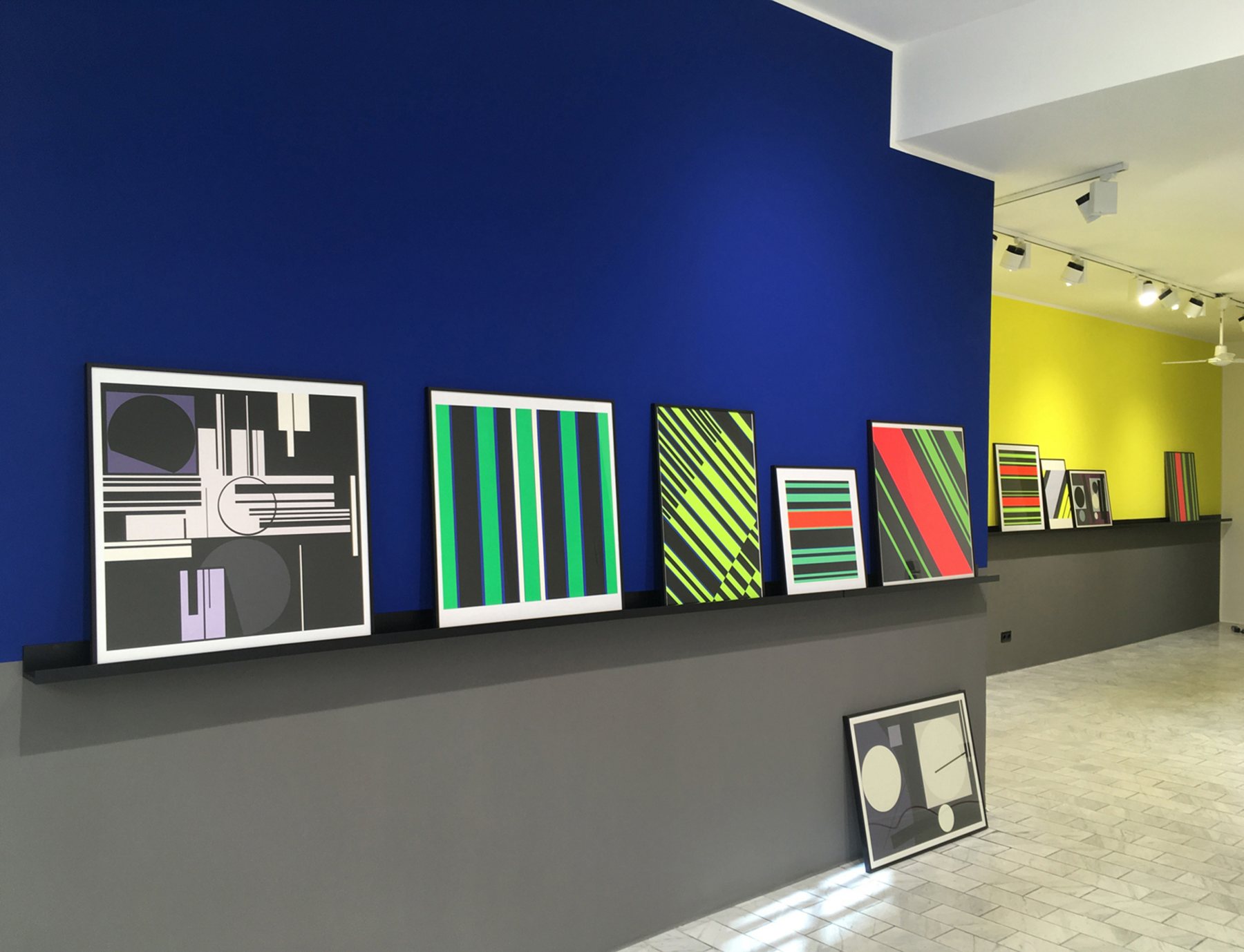 The new premises between Theresienstrasse and Oskar-von- Miller-Ring are located in the middle of Munich’s Kunstareal, which with its unique combination of art and culture is one of the most important cultural locations in Europe. In the colourfully designed exhibition space, visitors can now learn about the life and work of Günter Fruhtrunk, browse through his favourite books and listen to music from his records. From the gallery, one can see the Munich Art Academy, where Fruhtrunk successfully taught until his death.

Günter Fruhtrunk was a German painter and graphic artist. He was one of the most influential geometric abstract artists of the twentieth century, whose work can be classified as Op Art. Fruhtrunk was part of the so-called Concrete Art, which is known for its strong focus on abstraction. He created a dynamic language of forms with vector-like diagonal lines whose changing colours are rhythmically arranged, thus transforming the basic idea of Constructivism into a colourful world of images.

Günter Fruhtrunk was born in Munich in 1923. In 1940, he began studying architecture at the Technical University of Munich. After only two semesters, he served in the war in Finland from 1941 to 1945. During the Second World War, he suffered such a severe head injury that he suffered from the consequences for the rest of his life. He returned to Germany in 1945. For the next five years he studied privately with the then well-known painter and graphic artist William Straube near Lake Constance. He had his first solo exhibition in 1947 at the gallery “Der Kunstspiegel” in Freiburg. His acquaintance with the artists Willi Baumeister and Julius Bissier inspired Günter Fruhtrunk to pursue non-objective painting, which strongly influenced his further work from then on and became his main focus. In the early 1950s he undertook a study trip to Paris. Thanks to a scholarship he received from the state of Baden-Württemberg and the French government in 1954, he was able to settle in Paris for the long term. There he worked as an assistant in the studios of Fernand Léger and Hans Arp. In 1960, he was given a solo exhibition at the legendary Galérie Denise René in Paris.

In 1961 he received the “Prix Jean Arp” in Cologne and in 1966 the silver medal of the “Prix d’Europe für Malerei” in Ostend, Belgium. In Dortmund, he was given a retrospective at the Museum am Ostwall in 1963. From 1967 Fruhtrunk taught at the Academy of Art in Munich. In 1968 he took part in documenta 4 in Kassel and in the 34th Venice Biennale. In 1979, together with the architect Paolo Nestler, Fruhtrunk designed the “Quiet Room” of the UN Security Council in New York, which brought him the highest public recognition. In 1993, the Neue Nationalgalerie in Berlin honoured his work with a major retrospective, which was also shown at the Landesmuseum Münster as well as the Bayerische Staatsgemäldesammlungen and the Städtische Galerie im Lenbachhaus in Munich. On December 12, 1982, Fruhtrunk took his own life in his studio in Munich at the age of 59.

“We are delighted to open new premises in Munich’s Maxvorstadt district. They complement our two other locations in Munich, a city that stands for its artistic diversity, our gallery programme and our strong network of relationships,” says gallery owner Walter Storms. “Not far from the Munich Art Academy, where Fruhtrunk taught and took his own life in 1982, the work of the artist, whose art still meets the current zeitgeist, is thus commemorated. His painting was very progressive for the time and still possesses a modern, contemporary aesthetic. We will offer an impressive selection of Fruhtrunk prints, also at affordable prices.”